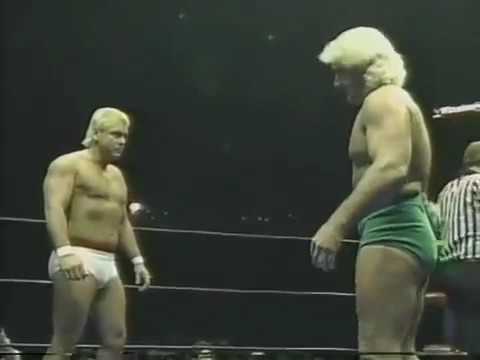 I made the mistake of watching too much old school wrestling lately and it’s made the modern stuff look silly. I’m undergoing a massive project of consolidating my DVD collection into Blu-Rays. Since I’m basically starting over, I’m filling in some gaps with shows/angles I’ve never seen. These old school look backs will probably be a regular feature through 2019 and I figured I’d start with February 1986 with the NWA’s Superstars on the Superstation.

To add some prestige to the event, Superstars on the Superstation has a pair of hosts — Magnum T.A. and the starstruck Linda Curry. The big problem here is Magnum is undoubtedly the NWA’s main solo star running neck and neck with the Rock-n-Roll Express as the top attraction.

He’d wrapped his blood feud with Tully Blanchard and was preparing for the challenge of Nikita Koloff. In 1988, it would be cool just to see Magnum on TV, but here, this was like having the Young Bucks hosting a big show instead of being in the main event. Maybe it wouldn’t have been so weird if Magnum was paired with say Gordon Solie, but Linda clearly knows all of nothing about wrestling. She’s so fascinated by everything that it’s annoying both Magnum and me.

Let’s just move on with the show…

I started watching the NWA weeks before Starrcade 87 so it’s fun watching the iconic second version of the Midnights in action. Dennis Condrey definitely has more of the rough and rugged style than Stan Lane. He fits in nicely with the more brawl heavy era that was the NWA 1986.

Ricky and Robert are insanely over here though David Crockett keeps irking me proclaiming them the tag team of the 80s. They’d only been a team for three years at this point. You could make the same case for The Fabulous Ones, The Fantastics, The Midnight Express, The Von Erichs, The Freebirds and the Road Warriors at this point.

I’d be hard pressed to think of a bad RnR/MX match and this one doesn’t break the trend. The speed of which these guys (even Condrey!) move is impressive. The selling here is also interesting as they’re reacting in a realistic manner in how the moves would hurt and aren’t cooperating without some resistance. Also, Robert plays Ricky Morton. As usual in this series, Cornette proves the difference maker. Bobby gets clocked by the tennis racket from Robert while Ricky goes after Cornette. That allows Condrey to nail him with the tennis racket. We’ve got new tag team champions and poor Bobby is too knocked out to take part in the post-match celebration. Gotta love Bobby’s commitment to selling the racket shot here.

Rating: This is MX vs RnR. They couldn’t have a bad match and the fan excitement and outrage over the ending made this one worth checking out.

Far be it from me to question Dusty Rhodes not being in the co-main event spot, but with four matches why book the tag team matches and singles matches back to back? Seems to me a better arrangement of the card would have been to open with this match, then Dusty vs. Tully followed by the world title matches.

It’s a definite styles clash to go from the speed and fast movement of the Rock n Roll/Midnights to the…methodical brawling of these four. Having now watched a year plus of heel Nikita, I’ve become a huge fan of #HeelKita. The dude just comes off like a monster in a way heels don’t anymore. And Uncle Ivan wrestles taller than he is in the sense I don’t consider him the weak link simply because he’s the shortest guy in the ring.

This is a lot of pounding away, clubbering and not much selling. That’s OK though since that approach adds more mystique to the whole which team is dominant? This is so different from the first match that it actually works to showcase the various styles in the NWA.

The match winds down when Baron von Raschke lumbers in for the slow-motion DQ. I understand the need to have another dastardly foreigner to replace the injured Krusher Khruschev, but geesh Dusty may as well created a stand-in Russian as von Raschke hardly looked credible in the ring with the Warriors. I had no beef with Paul Ellering going toe to toe with von Raschke either. I’ve seen Ellering wrestle in some entertaining matches at least.

Rating: I liked the spectacle of this one even with the DQ. It was too early in the feud to have the Russians lose. Especially with Nikita in the mix.

The NWA had way too many belts at this point. This was probably the point where I noticed it becoming a real problem. Dusty Rhodes had a lengthy run as the ‘world’s’ TV champion before the ankle injury forced him to forfeit. This was more to free up the title as Dusty was challenging Flair for the world title.

Dusty just wrapped his first major Dusty Finish at Starrcade. Typically, this would have led to a big rematch with Flair. Instead, Dusty decided he’d take the National title from the soon to be fired Buddy Landell. The National title was in a weird state as it was largely a mid-card title previously held by Landell, Terry Taylor and Black Bart, hardly the belt of the No. 1 contender.

Having the belt and Baby Doll seemed like overkill for Dream especially since this was a nothing title in the first place. At this point it’d been a while since I’d watched a solo Dusty Rhodes match. Starrcade 1985 was the last one and that was months ago. Dusty has been endlessly charismatic in his promos and his war with the Four Horsemen was in full swing, which sounds like a recipe for a fun match. Tully will play pinball for any face, but he couldn’t work any magic here.

Watching Dusty matches now is weird as he thrives off the crowd. They were into the match, but not to the point that they could carry it into being a fun spectacle even if the ring work was lacking.

I really think having yet another belt cooled off some of Dusty’s momentum. Dusty chasing Tully’s belt seems like a better formula.  JJ comes in for the second consecutive DQ and after a spike piledriver from Tully, the heels run off with Dusty’s National title. Tully helped Arn Anderson steal Dusty’s TV belt just a few months earlier so it’s surprising we’re revisiting angles let alone with the same guy so soon.

Rating: This one just never managed to click. Dusty and Tully would have better matches, but this one felt too long for the cop-out ending.

This match was a nice reminder that Garvin wasn’t some fluke undeserving champ when he beats Flair next November. Garvin had been built up as a credible threat to Flair’s title thanks to his Fists of Stone — they’re still working out the naming kinks. He’d already laid out Flair and seemed like a perfectly good contender and potential champ if Magnum wasn’t in the wings.

Flair was starting to get settled into his signature Flair match now, but Garvin had the kind of intensity that kept Flair honest. Their matches always had a high energy level and strong back and forth without ever settling into a formula.

It’s a toss-up who Flair had the better chop/slap exchanges with: Ricky Steamboat or Garvin. I’ll probably change up when I get to Chi-Town Rumble. For now, Garvin’s slaps win out. He looks like he has some real malice behind them. That’s what I always liked about Garvin. Like Ivan Koloff, he didn’t wrestle small and his basic punch and slap offense looked painful.

This is all wince-inducing chops and slaps, but it never gets boring. Flair seems to feed off the intensity of his opponent and Garvin is making him work way more than Dusty ever did. Tommy Young takes a man-sized ref bump, which gives Flair just enough of an opening to give Garvin a knee to the back. Garvin puts his foot on the rope, but Flair pulls it off as Young completes the three count. The Nature Boy gets a very controversial win that keeps Garvin strong and a top contender.

Rating: This was a lot of fun and would have easily been match of the night if it wasn’t for the opening tag team match. Garvin and Flair had underrated great chemistry.

You can see Dusty understands he’s got a good idea here even if it’s a bit raw. The Clash of the Champions would become a staple of the NWA/WCW and this is basically where it got started. With 3 out of 4 matches ranging from good to very good, this show is well worth checking out.