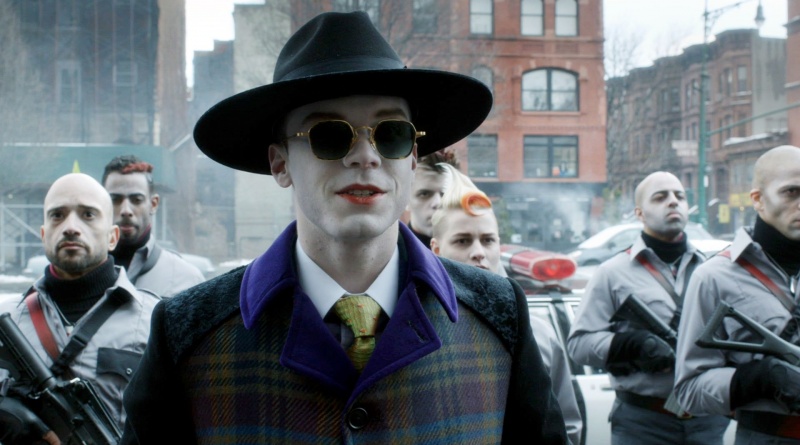 We’ve got one more episode to go, but I’m ready to put Gotham’s fourth season up against the best of the best of the other DC TV shows. One Bad Day was another extraordinary episode in this great season with some shocking and crazy moments that could only happen in Gotham.

With Gordon feared dead in the bombing at Jeremiah’s lair, Bullock is trying to rally the GCPD. But they’re not exactly Team Bullock. Apparently they’ve got a long memory on Bullock leading them to the slaughter when Professor Pyg was on the loose.

There’s no need to search for Jeremiah though since he’s led a bunch of his goons right outside the station. Since he’s holding a deadman’s switch, Bullock and the GCPD can’t make a move. Jeremiah wants to remake the city in his image, but first wants it empty and orders an evacuation in six hours. The art direction in this scene is exceptional even for Gotham, a show where that’s so much the norm it’s easy to take it for granted. To prove he’s not bluffing, Jeremiah blows up another building. 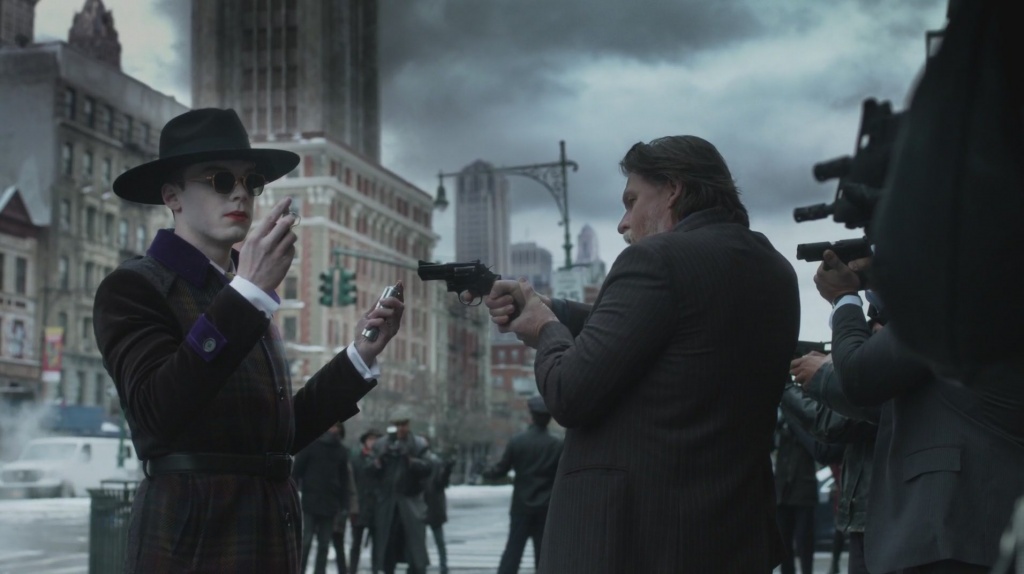 In the ensuing chaos, Bruce shows up at the station and tells Bullock that Wayne Enterprises is inadvertently responsible for the bombs Jeremiah is using. Jeremiah has eyes all over the city and calls Bruce threatening that he will kill Alfred if he doesn’t do exactly as he says.

Cameron Monaghan was incredible with his Jerome take on The Joker, but the more rational crazy Jeremiah is even better. At this point I’d rank Monaghan’s Joker right up there with Heath Ledger and Jack Nicholson.

The taunting scene where Jeremiah tells Bruce it just takes one bad day to reduce the sanest man alive to lunacy was appropriately chilling and terrifying. It’s also nice and ominous that Jeremiah sees something special in Bruce and wants to unlock it. This is setting up a unique spin on the Batman/Joker dynamic with Jeremiah seeing Bruce as a kindred tragic figure.

Bruce isn’t foolish enough to fall into Jeremiah’s trap alone and has Selina come with him. Good thing as she’s the one who figures out Scarecrow was pumping fear gas to make Bruce hallucinate into thinking Alfred gave himself a Joker smile and was trying to kill him. Not only did Selina defeat Scarecrow, but she freed the real Alfred who killed the Alfred stand-in. 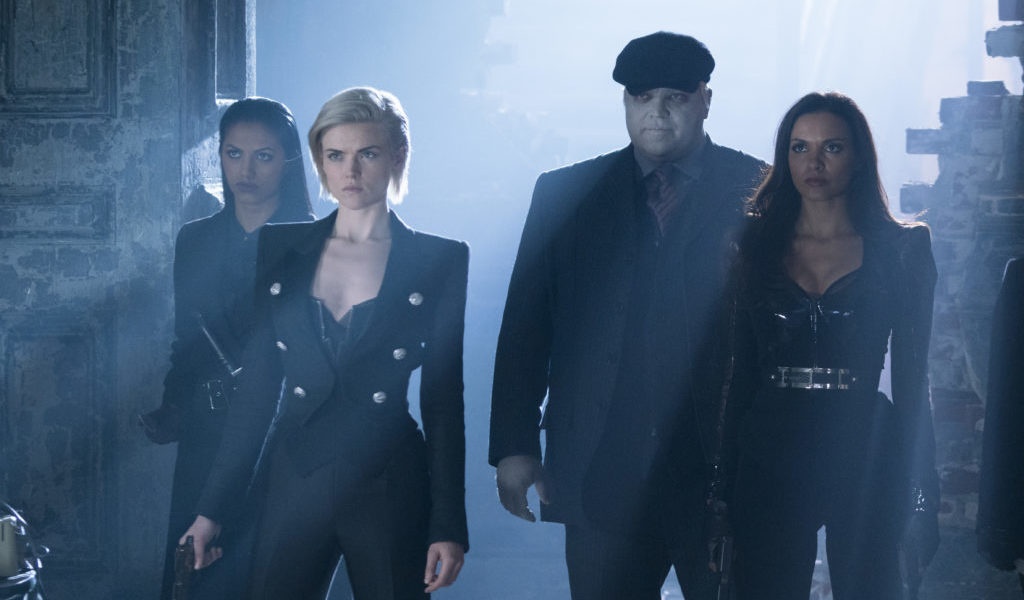 Penguin sees his opportunity and proposes an alliance with Barbara and Tabitha. Barbara rightfully blows him off, but Tabitha is down once Penguin mentions they can score a payday that will force Hugo Strange to cure Butch. It’s Penguin’s alliance that finds Jeremiah’s bomb brain central before the GCPD. No shocker there, but Penguin has a pretty smart scam. He wants Jeremiah to hold the mayor up for $50 million. They’ll take the money and Jeremiah can have his brain bomb back.

But Jeremiah isn’t playing with a full deck and brings out a rocket launcher to take out his henchman Penguin captured! Whenever Gotham resorts to having a character take out another with a rocket launcher it’s amazingly absurd. Jeremiah had a great line asking what’s so insane about having a backup plan? I love this take on Joker where he doesn’t think he’s crazy but keeps doing increasingly crazier things.

Thanks to Penguin’s crew, Jeremiah isn’t waiting six hours any longer. He’s going to blow up the city as soon as he’s far away from the blast zone.

It was a good thing Riddler had some of his crew follow Gordon as they rescued him from the bomb blast and took him to Lee. Like everyone else who sees them, Gordon doesn’t buy Lee is really into Riddler. What’s so funny about true love? Gordon talks to Riddler who’s able to decipher the plans Gordon grabbed from Jeremiah’s lair. Riddler scoffs at the notion Gordon only has one thing he can’t figure out and gets suckered into a knockout blow.

Gordon gets back to the GCPD in time to get the plans to Lucius. Bullock wants to square things up with his fellow officers and volunteers to take down the brain bomb. Only, Jeremiah has stacked the deck. Instead of one fail safe, there’s two and only one really works. The other will trigger the bombs.

In a subtle nod to The Dark Knight, Jeremiah goes to set off the bombs only to be disappointed at the lack of an explosion. Jeremiah’s crew gets unruly, but he planned for this and flees the room to unleash flames that reduces them to ash. That was a very Joker-like plan. 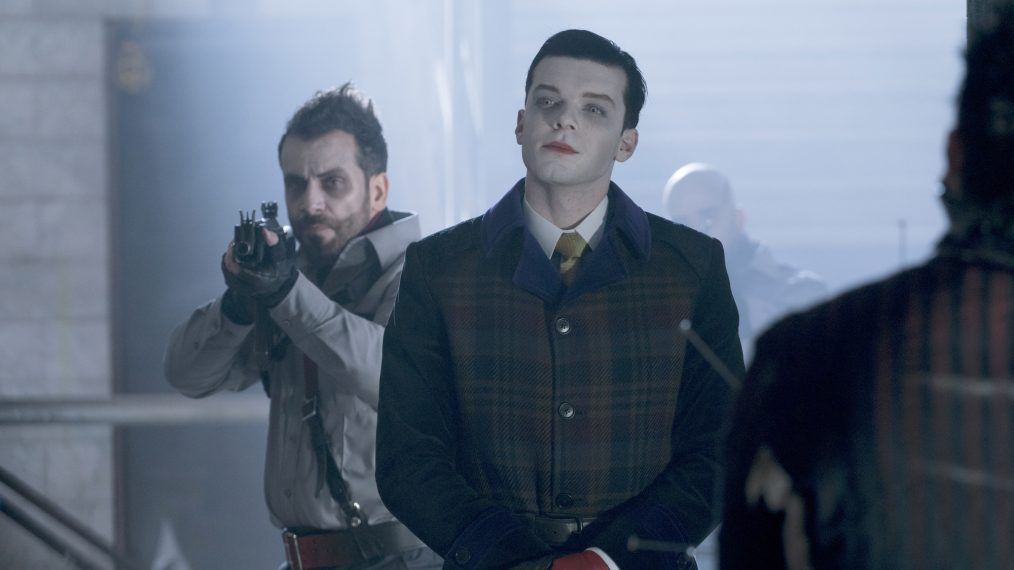 Bullock gets the big hero’s welcome at the GCPD while Jeremiah plots his revenge before he gets interrupted…by Ra’s. He’s impressed by Jeremiah’s perseverance and proposes a partnership as this isn’t just about Gotham, but Bruce Wayne. Uh oh.

At Wayne Mansion, Selina and Bruce finally have their long-awaited kiss. This was a sweet moment, which naturally couldn’t last. Jeremiah shockingly pops up and shoots Selina. It doesn’t look like this is a hallucination and this might be the incident that gives Bruce that one bad day to go over the edge.

As far as penultimate episodes go, One Bad Day was amazing as it sets up a season finale that seems poised to deliver big time on Gotham’s best year yet.