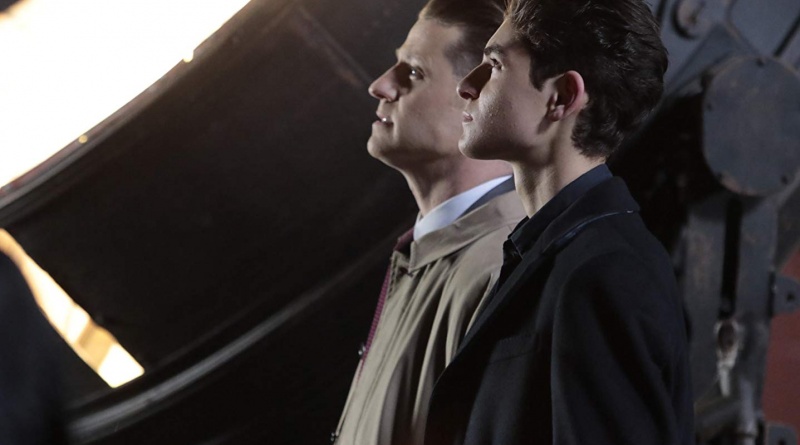 I’m very glad I got a little behind on Gotham. After watching No Man’s Land, I wouldn’t have the patience to wait the off season for the next season to start. Now to hurry up and knock this recap out so I can get started with Season 5!

It was no dream sequence or hallucination. Jeremiah really did shoot Selina, who’s dealing with severe spinal injury. Last episode’s homage to The Killing Joke truly did go all the way.

This leads to quick and immediate fallout. Hugo Strange has Butch prepped to de-Solomon Grundy him, but Tabitha rushes off to kill Jeremiah for shooting Selina.

Ra’s appears to Barbara in a vain attempt to get her to come with her when he leaves Gotham. We never did really understand his fascination with her. 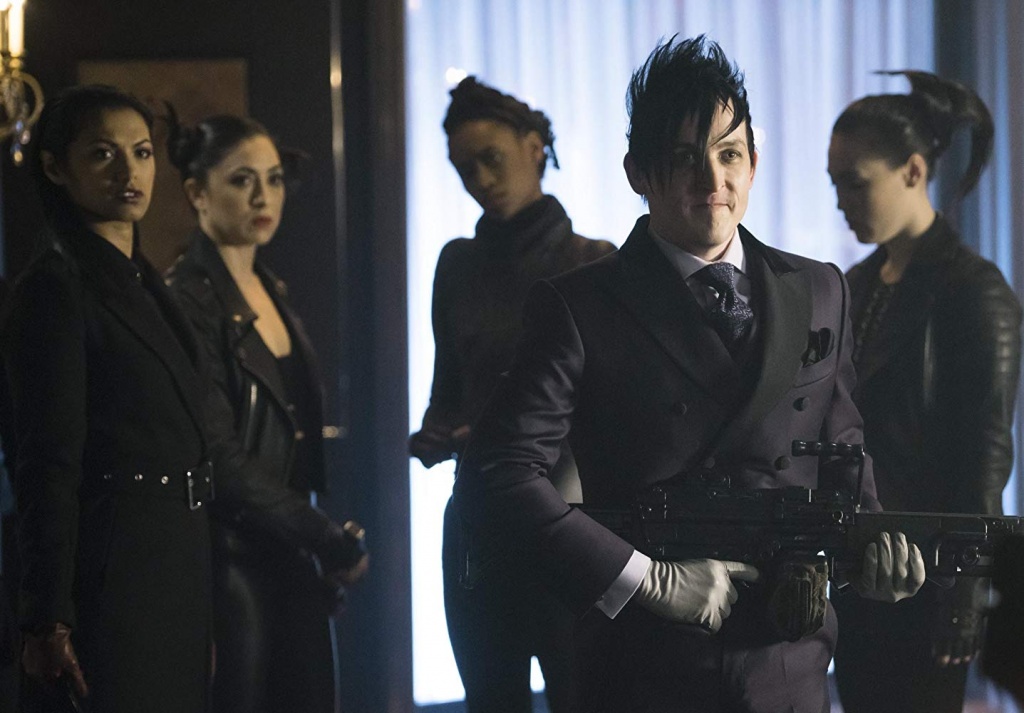 Jeremiah might be in police custody, but he’s still in control. The mayor pressures Gordon to end the evacuation, but Gordon has been around this city too long to trust that everything’s OK. And he won’t have to worry about the mayor anymore since an unaccounted for bomb blows him up. Now Jeremiah’s demand to have Bruce brought to him suddenly have a lot more weight.

Gordon won’t budge, but with the mayor’s murder, Gotham has entered into a state of martial law and Major Ronnie Harmon (Malik Yoba!) is here to put things in order. He could care less about Gordon’s apprehension and wants Bruce brought to Jeremiah. When Gordon complains, he gets arrested, but not for long as Riddler frees him. Just so he can kill Gordon himself with a press plate. I love how the show goes rogue with so many characters, but largely keeps Riddler comic book accurate right down to the death traps.

Lee busts that party up and says she’s leaving Gotham. She wants Riddler to come with her, but he’s got to leave Gordon alone. Satisfied that he’s ‘won,’ Riddler ditches his kill Gordon plan. Lee kisses him goodbye and gives him her car so he can save Gotham.

Meanwhile, Bruce and Jeremiah have their face off. I loved how Bruce was wearing all black and Jeremiah is largely wearing purple. That definitely gave this scene an early Batman/Joker vibe. David Mazouz has really grown into this role to the point I fully buy in to him as Bruce Wayne. 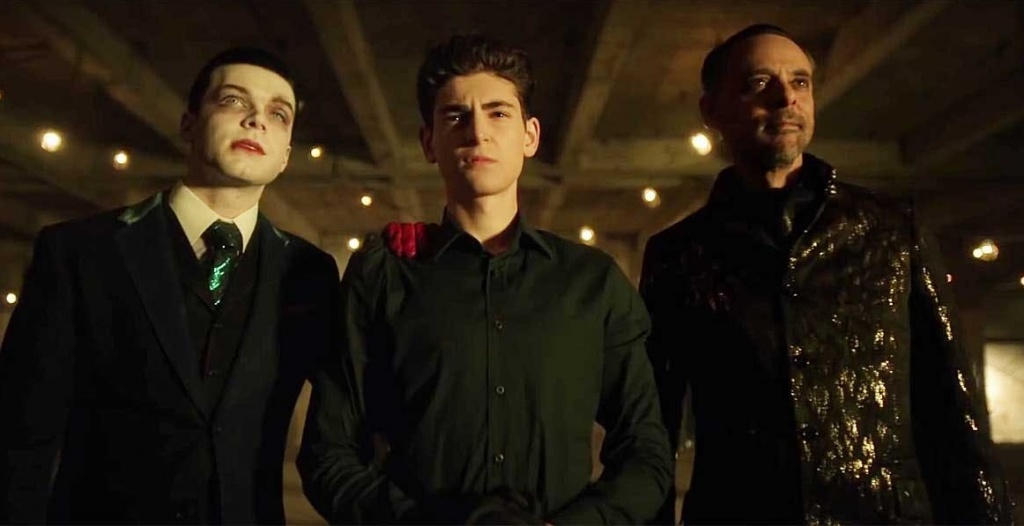 Jeremiah taunts Bruce and tells him the vision he saw was the Gotham Bruce needs and teases Ra’s influence. Just like Candyman, when his name is finally uttered, Ra’s arrives. He kills the guards, frees Jeremiah and takes Bruce and all of the bombs in police custody. Uh-oh.

Jeremiah and Ra’s conversation with Bruce really felt like a supervillain team-up. One of the fun things about Gotham now is it isn’t a stretch to imagine this with an all grown-up Batman and his rogues. Gordon figures out the bomb targets are the bridges, but Harmon isn’t hearing it until the GCPD back Gordon. It’s always nice to see the police force unified.

But it comes down to the unlikely strike force of Alfred, Barbara, Tabitha and Penguin to rescue Bruce and stop Ra’s. We don’t always get a lot of strong fight scenes in Gotham, but this battle played out nicely with some well thought out fight choreography. Barbara manages to get around the whole only Bruce can kill Ra’s by guiding his hand to Ra’s chest. That was clever.

Only problem is it’s too late. The bombs are detonating and Gotham is now shut off from the rest of the world. This plays out better than it did in The Dark Knight Rises as we see the airlift evacuations and people deciding to stick around.

With Gotham in crisis mode, Lee won’t leave. Riddler’s mind was already poisoned with doubt and this was the final straw. He goes to stab Lee, but she surprised him by stabbing him first. She knew him too well, but Riddler still manages to land a killing blow. Their final kiss of truly recognizing each other might have been hokey, but for Gotham it somehow works. Somehow.

At least Tabitha gets her happy ending. Butch is back to normal and she’s declared her love…right before Penguin shoots him. In case we’d forgotten, Penguin holds a grudge. He wanted Tabitha to feel the loss of losing the person she loved the most just like he did when Tabitha killed his mother. Well, hard to argue with that logic. It’s too bad to see Butch get killed, but this was a great way to write him off the series.

Selina’s getting airlifted out of Gotham before the evacuation is complete. There’s room for Bruce, but he won’t leave. He’s making Gotham his responsibility and he’s going to bring Jeremiah down. But he’s going to do it alone and sends Alfred to stay with Selina.

Harmon recognizes it’s a waste of time trying to convince Gordon to leave and heads out with the military. Gordon isn’t alone though as Lucius, Bullock and other officers stay to help keep the city together even as Gotham descends into chaos. 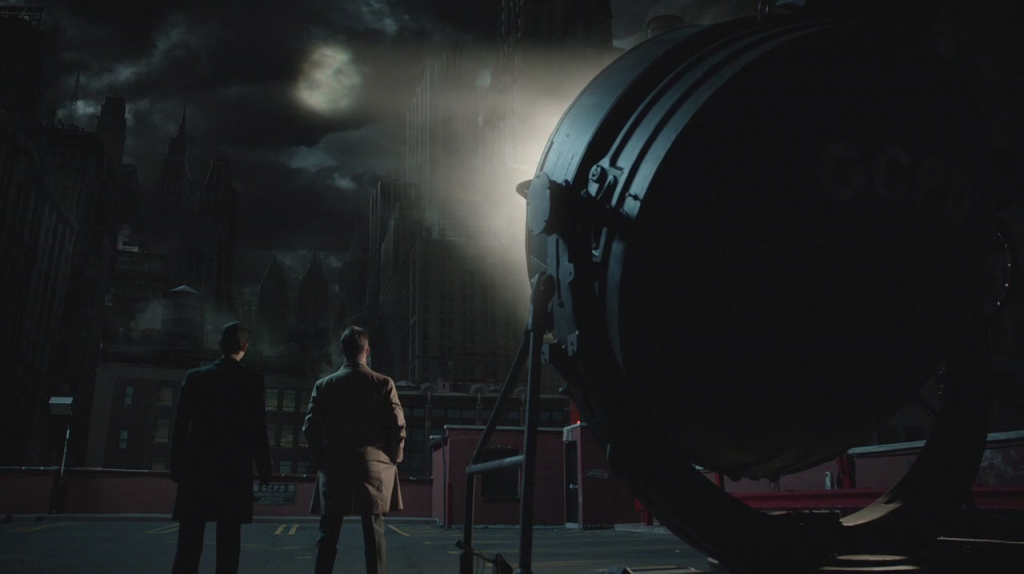 The criminals are already starting to establish their turf. Firefly, Mr. Freeze, Penguin, Scarecrow and maybe Man-Bat all start carving out territory. Barbara decides Gotham’s problems can be traced to men and declares her spot Sirens Turf with no men. That really brings that No Man’s Land feel to the finale. Penguin orders Strange to fix Lee and Riddler to bring them back in the fray. Death has become kinda cheated in Gotham. On one hand it raises the question of why kill off characters only to bring them back, but it is based on a comic book so…

Gordon is on the GCPD rooftop trying out the new spotlight. Bruce arrives and thinks it’s challenging all the criminals. He seems to appreciate it. Yeah, that’s a pretty great way to wrap up the season. No Man’s Land was an effective finale that also set up a slew of very intriguing possibilities for Gotham’s final season.