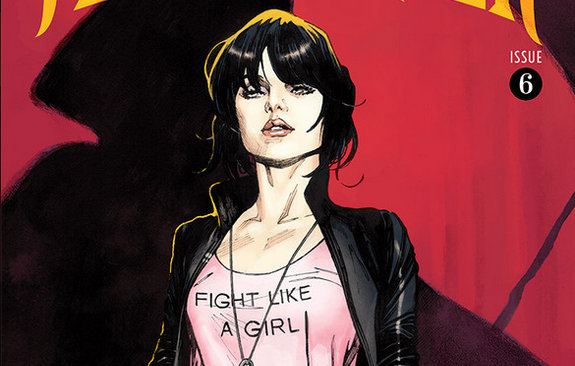 After last issue’s shocking twist, Mark Millar and Olivier Coipel decidedly stick the landing with the conclusion of The Magic Order. I’ve been a fan of the series since the first issue and with something this fresh and unique the concern is if it suffers from a lackluster ending. There’s no danger of that as Millar pulls off a fittingly clever sleight of hand twist that works perfectly.

Tormented by the accidental death of his daughter, Gabriel turns on his family and The Magic Order. Gabriel’s betrayal proves the ace Madam Albany needed to turn the tide against The Moonstone family.

Now the only thing left is dealing with the last of the Moonstones, Gabriel’s rebellious sister, Cordelia. But she might prove the deadliest of the family despite not being as powerful as Gabriel. It’s hard to go into much more detail without stomping all into spoiler territory. And it’s the kind of payoff that’s far more impactful reading with as little insight as possible anyway.

I will say Millar wraps this chapter up on a very satisfying note that remains consistent with everything he established in the previous five issues. There’s no cheats or shortcuts thanks to him withholding information from readers. In keeping with the book’s Godfather meets Harry Potter tone, this issue features a memorable final act and conclusion.

Coipel has delivered throughout in this series and he doesn’t suffer from a letdown with the finale either. When Netflix puts this out to a series, the storyboards only need to read the comic to get the ideal, most cinematic shots to use. Coipel creates his layouts like a director and he always seems to use the best shot to convey the moment. He really made the adaptation team’s work so much easier.

The color work by Dave Stewart is fantastic as well as he uses just the right amount of restraint to capture the severity of the action without going too heavy into the gore.

Easily my favorite part of the issue was the final page as it wrapped everything in a perfect full circle moment as well as the announcement that this is just the end of Book One. There’s plenty more magic to come with The Magic Order and I can’t wait for the start of the next chapter.