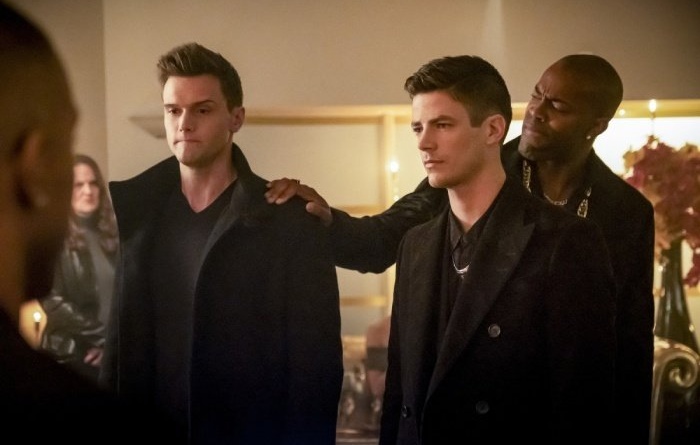 Goldfaced marked another strong Flash episode. There’s a trend here and it’s a pretty simple one — keeping the Team Flash subplots to a minimum and not trying to cram every character each week leads to better episodes.

With Goldfaced that means Cisco and Caitlin are riding the pine. Caitlin gets a quickie cameo while Cisco is MIA again. The writers didn’t do the best job of explaining away Joe’s various absences and they’re not even trying with Cisco.

Normally, I’ve been annoyed with the Nora subplots. Her secret isn’t that riveting to warrant keeping it a mystery from everyone. Because Sherloque is an idiot he’s pondering out loud about Nora’s secret. This prompts her to run (probably literally) to Thawne asking for help. He knows how Sherloque thinks and knows he just needs a distraction to keep him occupied. And what better way for a guy who has five ex-wives than a new love interest? The gag is the woman Renee Adler (Kimberly Williams-Paisley) is the same woman Sherloque has fallen in love with across the multiverse. 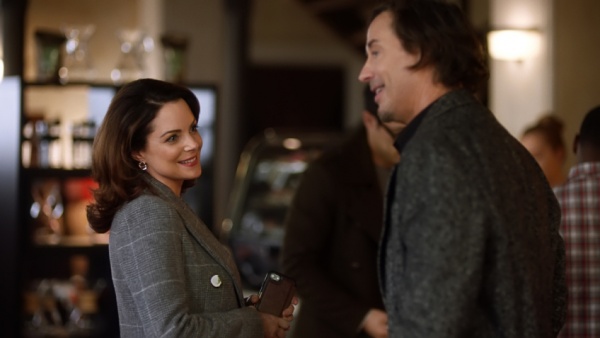 After Sherloque strikes out with this Rene since she mistakes his acute observation skills as him being a stalker, Nora has to help. But she botches it by calling on Sherloque’s exes for advice. We’ve seen two versions of the Council of Wells, but I actually liked the gimmick a lot better here. Maybe because Williams is a fresher face than Tom Cavanagh trying to pull off various accents and personalities? Nora prompts Sherloque to give it another shot and he comes off less like a serial stalker this time. And to seal the deal, Nora appeared to zoom quickly to make Sherloque think Rene is a meta. Pretty sneaky.

Caitlin thinks she has a new way of stopping Cicada, but they need to use a bio-EMP device, which was recently stolen from Ivo Labs. Nice Easter Egg. The thief is a familiar sounding meta named Goldface. Goldie has been a regular punching bad for Green Lantern and The Flash since the Silver Age. Interestingly, the show swaps his shtick with that of his comic wife, Amunet Black/Blacksmith. In the comics, it’s Blacksmith who runs an underground ring for Rogues. Here, it’s Goldface re-envisioned more as a 90s hip hop stereotype with big thick gold chain. Damion Poitier doesn’t play him like a wanna be gangster though making for a smart twist.

Barry and Ralph have to go undercover to try and buy the bio-EMP, but Barry draws too much attention forcing them to do a job with Goldface’s gang. I say this every week now, but Ralph almost comes off like a different character now. He’s so much more likable and actually adds to plots instead of being a giant annoyance. Barry gained the spotlight by trying to purchase Toastmasters, a very far reaching Easter Egg even for The Flash. Those were the name of the cop-killer guns that Steel had to get off the streets during Reign of the Supermen.

Goldface was smart enough to have wrist bracelets that would neutralize any meta’s powers forcing Ralph and Barry to play along. They manage to keep their cover longer than I expected and then get into a shootout with Goldface’s gang. Barry and Ralph use the stun feature on the blaster while Goldface’s crew uses the kill shot red resulting in a high stakes laser tag sequence. Yeah, it was a little goofy, but it was fun.

Finally, they have to take down Goldface without their powers. But the big twist is Goldface actually does have powers like his comic counterpart and can turn his skin to gold. That was a surprise. After taking a big beat down, Flash finally suckers Goldface into hitting an fuse box. The bleeding gold effects looked great. 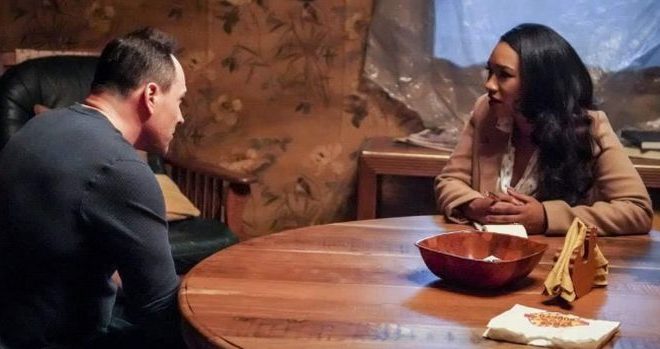 The writers remembering Iris can be a great storyline asset beyond the Team Flash desk continued this week. Iris tracked down some leads and did some investigating to get to Orlin’s house. She had to think fast when Orlin returned home and convinced him she was there for an interview. Iris forgot her purse, but managed to snag it without drawing Orlin’s attention. Thankfully, Orlin wasn’t made to look like a complete idiot and remembered she wasn’t carrying a purse when she arrived. In a fun scene that showed Iris has great instincts as a reporter with a knack for getting in dangerous situations, she fights Orlin off herself by striking his weak spot in his chest. That’s been hinted as a serious weakness throughout the season so it didn’t feel like a cheat.

Team Flash rushes in for the save, but Orlin vanished. Iris isn’t worried now though since she knows how they can finally beat him once and for all.

Goldfaced marked two strong consecutive episodes for The Flash. There’s still enough episodes left that it could win me over all the way. These next few episodes will be critical in this case. Let’s see how it plays out.