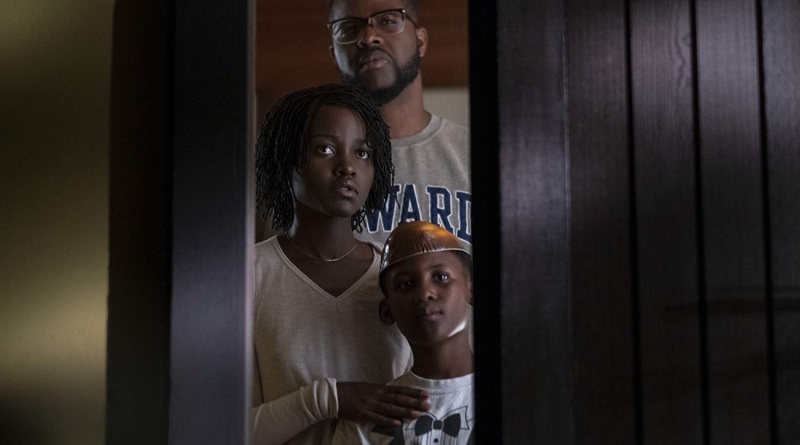 Us is one of those movies that’s going to be hard to forget anytime soon. It’s wonderfully complex and thought-provoking enough to warrant repeated viewings, but on the initial watch, it’s as creepy and unsettling as any horror film I’ve watched in the last decade.

Director/Writer Jordan Peele came out of nowhere with his debut film, Get Out, which earned him a Best Original Screenplay Oscar. Peele won’t be surprising anyone with Us and it’s fair to say expectations were huge for his follow-up. If Us isn’t quite as masterful as Get Out, it’s certainly just as riveting and memorable an experience. 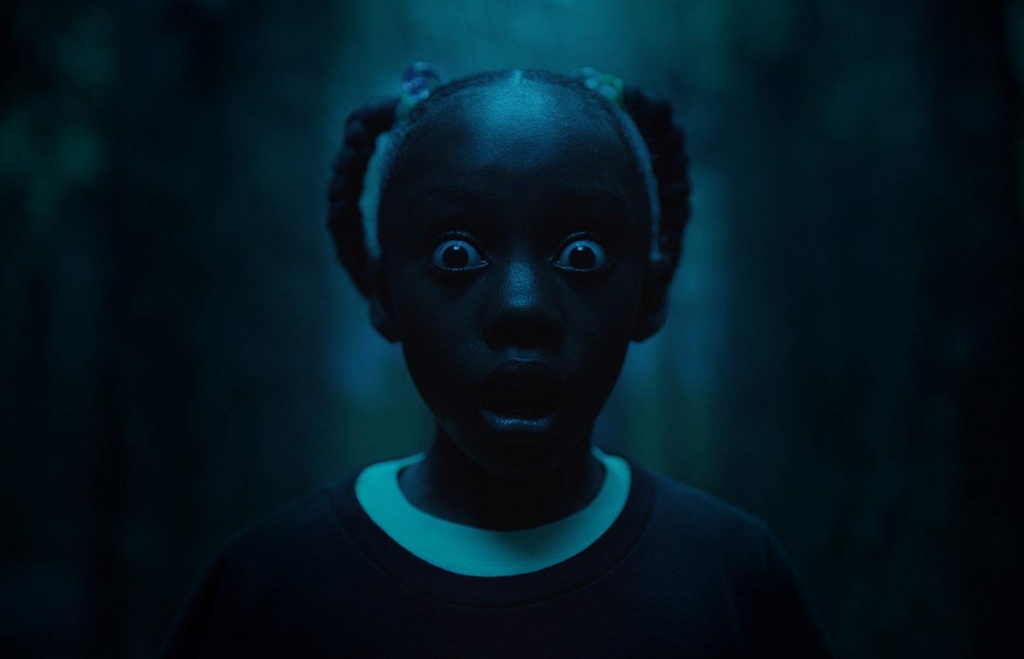 As a child, Adelaide (Madison Curry) wandered off from her parents (Titans’ Anna Diop and Aquaman’s Yahya Abdul-Mateen II) on the boardwalk. She found herself in a fun house where she had an encounter that left her emotionally scarred. Decades later, Adelaide (Lupita Nyong’o, Black Panther) has returned to the beach house along with her fun-loving, playful husband Gabe (Winston Duke, Black Panther) and their children, Zora (Shahadi Wright Joseph) and Jason (Evan Alex).

Being back at the beach house has Adelaide on edge and she can’t escape this feeling of dread. Even when hanging with family friends, Josh (Tim Heidecker) and his wife, Kitty (Elisabeth Moss), Adelaide can’t enjoy herself and wants to go home. Peele might take a bit too long in dishing out the reveals, but once a family of doppelgangers shows up outside, the film gets an adrenaline boost it never loses the rest of the way.

Eventually making their way inside, the family, led by matriarch Red (Nyong’o) start sizing up their mirror images like cats who’ve cornered a mouse with nowhere to go. Peele milks this confrontation for all it’s worth as he amps up the creepiness and uneasiness. I haven’t been this rattled by a home invasion scene since The Strangers. 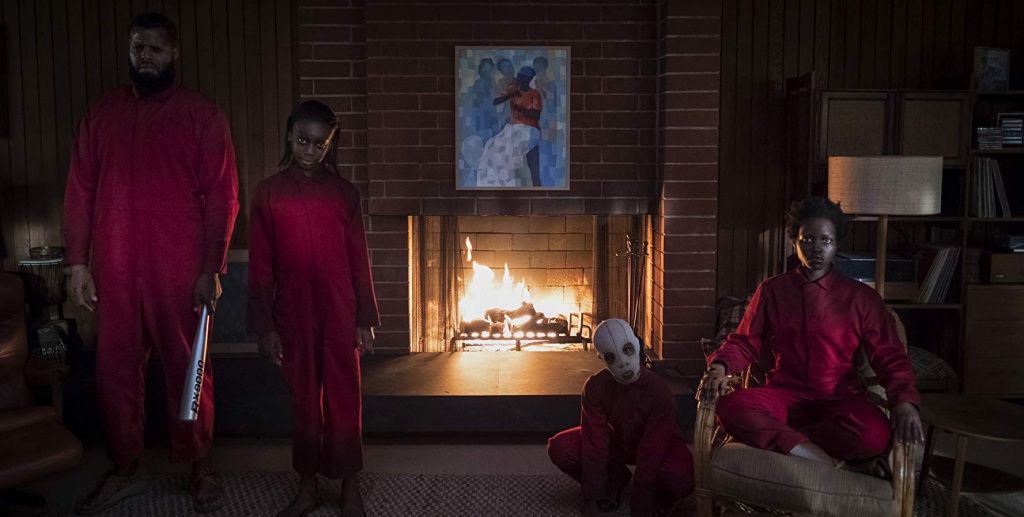 Nyong’o has already won a Best Supporting Actress for 12 Years a Slave and she’s been a joy to watch in other films. Horror/thrillers rarely get any award recognition, but Nyong’o delivers a career best performance that definitely warrants consideration come nomination season. It’s a haunting, layered performance that showcases her versatility. As the doppelganger Red, Nyong’o gives of of the more chilling horror characters to step onto the big screen in a long time. It’s not just the pained, strained voice, but the precise, calculated movements and eerie calm of a long in the works act of revenge coming together.

Duke is a lot of fun playing against type. Looking at him you’d expect him to stick to tough guy roles, but he wisely goes for the big teddy bear route here as a man trying to play the tough guy based on expectations, not as his normal way of life.

Peele has quickly established himself as the modern day Rod Serling with films that wonderfully fit into The Twilight Zone realm. They can be enjoyed on multiple levels from the well-timed humor, explorations of relationships, identity, social commentary and thriller/horror. It’s impressive how many boxes Us checks off. Too often I watch horror films and the characters react in such idiotic fashion they’re almost begging to get killed. What makes Us so nerve-racking is the characters react in a sensible manner and still find themselves in harm’s way.

I’ll save the intricate think pieces for people deeper than me, but there was something striking to me about the imagery of Adelaide handcuffed as she prepares for her final confrontation. It’s a fitting bit of symbolism of how rare the sight is of a black woman being the ‘final girl’ in a horror movie and how they’re shackled into traditional supporting roles in action films. 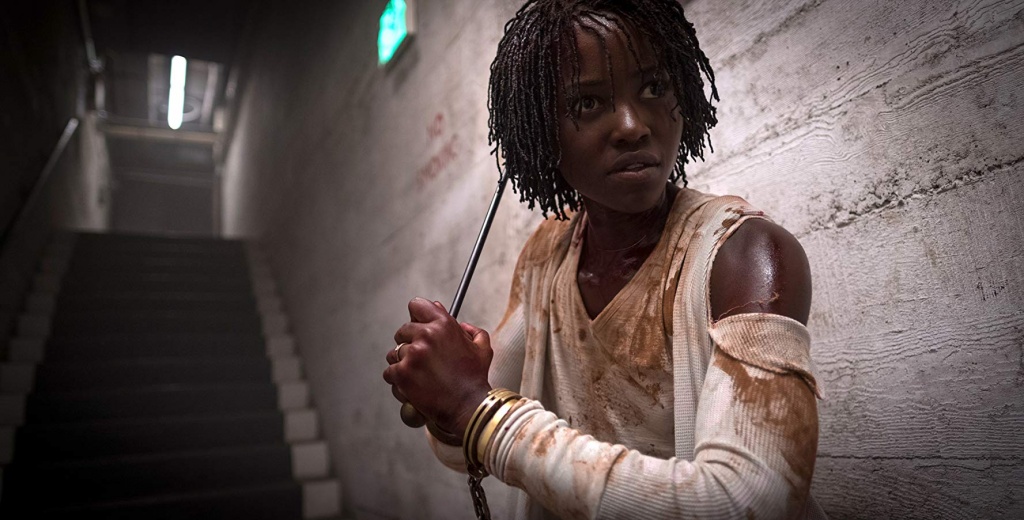 Peele’s music choices are pretty interesting as well. The Luniz’s I Got 5 on It is going to be stuck in the heads of viewers old enough to remember it back in the day, but there’s another iconic rap song used to great effect in a particularly dark scene.

My biggest hang-up involves a fairly significant spoiler so I won’t ruin it now. It’s directly tied to one aspect of the ending. This might be a case of another viewing providing some greater insight, but on the first watch it’s a mild issue.

Most horror movies are pretty disposable entertainment where I might think back on a few cool kills and murder scenes and then barely think about it. There’s something about Us that won’t let it so easily fade from my memory and keeps me thinking about it. That’s not just the mark of a great horror film, but one of 2019’s best offerings.