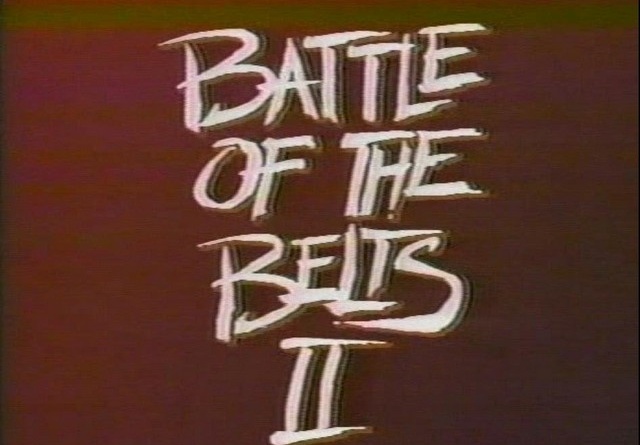 Before the Clash of the Champions, there was Battle of the Belts, a showcase Florida event that brought talent from across the NWA to tangle with the regulars of the CWF.

The territory has been hurting since Dusty Rhodes went to the main NWA branch in the Carolinas. In his stead, Blackjack Mulligan has been holding things down and got a boost with the return of his son Barry Windham.

Gordon Solie and Mike Graham welcome us to the Eddie Graham Sports Center in Orlando. Mike certainly doesn’t oversell the event saying it’s the biggest night of wrestling in Orlando. I can appreciate his restraint.

I skipped the Tyree Pride vs. Rod Slinker and Kendall Windham vs. Prince Iaukea matches. Apologies to all 40 of their fans.

Denny looks like a fake guy. He doesn’t have a ton of muscle definition to be charitable and looks like a 30 second effort on a Create a Wrestler. But hey, Brown is a mini pioneer as one of the few guys at this period to have a tattoo. It’s probably a daisy, but he’s trying. Brown is the world’s junior champion, which does not speak kindly to the rest of that division. The fans are equally unimpressed and liberally raining down some boring chants.

Muta on the other hand has a real presence already.  The height difference with Brown is noticeable — this is like watching Razor Ramon vs. 123 Kid. Color commentator Mike Graham notes Japanese wrestlers have tremendous cardio, which is a focus of their training. The match isn’t the most exciting, but Graham and Gordon Solie are providing some solid commentary breaking down rules and how a wrestling match is more physically taxing than a football game. Mind you, this is before the pillow fights in today’s NFL.

It’s neat watching Muta in his early stages. The moves are already there, but you can see he’s still figuring out how to chain them together. Brown is set up to get the easy crowd support simply by virtue of his birthplace, but Muta’s offense keeps wowing them especially since Brown’s offense is so uninspiring. The handspring elbow and moonsault gets some fans up to applaud. I was irritated — along with much of the crowd — that Brown kicked out. The crowd gets pissed when Brown collides with Muta, who’s unable to follow him out after tossing him over the top, which leads to a very lame DQ.

Save 25% on toys, collectibles, board games, statues and apparel that you can fit into an exclusive Thanos bag only at GameStop Locations

Gordon and Mike cut to clips of an earlier match where Jesse Barr countered Hiro Matsuda’s interference to regain his Southern Championship from Lex Luger, billed here as Lex Lugar.

The Lone Ranger may have been a high level jobber in the WWF as Jimmy Jack Funk, but Barr was a really good territory star. He could have easily been a bigger threat. He’s a very good wrestler/brawler. I’m assuming Terry and Dory Funk influenced his decision to go to the WWF, but I think he could have been a star in the NWA.

Let’s see how long before I revert to the common spelling. Lugar’s wifebeater with bare midriff/headband combo is a weird look for a heel. Barr was a solid heel in Florida, but he won over the fanbase upon returning to the territory. There’s a big banner in the stands as some fans proclaim their love for Lex so you know it’s inevitable that he’s going to end up as a huge face here.

Like Muta, Lex already shows glimpses of his finished product. His ceiling isn’t as high as Muta’s from a wrestling standpoint and he clearly needed the Four Horsemen to finish molding him into carrying himself like a main event player. Barr milks getting into a test of strength to really sell his leeriness of locking up with Luger. The fans eat it up and it’s another example of why building suspense is so important in wrestling.

Lex could use some of that Japanese cardio training as he’s pretty gassed, which shows with his weak strikes. When Luger applies a super weak Boston Crab, Graham notes that this is the move that Stan Hansen used to beat Rick Martel for the AWA title. That’s just cool and it gives some added credibility to moves that don’t typically result in a submission in Florida. Luger is on fumes at this point.

Barr hits his shoulderbreaker, but Lex reaches the ropes. Lex hits a strong clothesline and knocks Barr’s foot off the ropes and gets the win and his title back.

Buddy Colt interviews Lex, who puts together a pretty solid post-match promo. Hiro might be a good trainer, but he’s not very useful helping Lex navigate through his promos. Buddy seems to have Jesse The Body vision here as he talks away Lex pulling Barr’s leg off the ropes and doesn’t question the controversial win at all.

I’ve been watching Brody terrorize Texas All-Star Wrestling for a few weeks. And staying consistent, Florida can’t get anyone’s name right as they spell it Brodie.

Brody is fun as he just goes nuts and fully embraces that Wildman persona. Wahoo isn’t flashy or pretty, but he comes across like a legit tough guy. This match isn’t too long as it quickly lands on the outside and the two have a super brawl around the ring before the count-out. I would have trimmed some of the Barr/Luger match to let these guys battle it out a little more, but for a count-out, maybe quicker is better?

The arrangement of this card is weird. Why would you book two hardcore brawling matches back to back? Just sandwiching Barr/Luger between them would have made a big difference. As you’d expect this is a technical masterpiece especially when Sullivan and Mulligan are in there. This is a prototype pre-ECW brawl — all action and just brawling. It’s right up the Road Warriors’ alley even though they were heavily involved in a war with the Russians at this point in Jim Crockett’s NWA.

Even weirder the match ends with both teams going to the back with almost the exact same finish as Wahoo/Brody. Would it really have been that bad to have one of the Warriors to pin Roop or Haze?

Gordon interviews Superstar Billy Graham. Graham has an abundance of charisma. He seems like the kind of guy who should be able to fill in the void of Dusty in Florida. Sure it’s not headlining Madison Square Garden cards, but Superstar still had some value.

Buddy interviews Flair, who debuts the Big Gold belt. I like the idea of showing it off on a big event instead of a random episode of Worldwide.

Flair coming out to anything other than 2001 Space Odyssey is always going to be weird.  Easy Lover is a weird choice as an alternate theme since it’s talking about a woman.

Barry’s mustache is…distracting. Thankfully in Florida this crowd is not split and Barry is decidedly the fan favorite.

After leaving WWF, Barry seemed extra motivated. Flair is at his peak here too and Barry is ready to meet him at his level. So often at this point, Flair had to do a little smoke and mirrors to make his opponents look better.  That’s not a problem with Barry. Flair’s Clash of Champions match might be Flair’s best work in terms of building a star and his Steamboat trilogy might be the best purest US style series, but his matches with Windham are the best Flair Formula matches. Barry has the size and height advantage like Luger and the Warriors, which gives Flair a visual disadvantage, but unlike them, Windham can go move for move with Flair.

I wonder if Barry was just not budging on being willing to leave Florida. It seems crazy that he didn’t get even a few months with the title.

This might be surprising, but Barry is busted open. Mike Graham mentions the match is at the 40 minute mark, which is wild. They haven’t done a lot of stalling and the action feels more meaningful than the sprints we get these days.

Flair tosses Barry into referee Bill Alphonso in a great ref bump, then throws Barry over the top rope. Barry recovers quickly and nails a missile dropkick. I’m now convinced Barry wasted too many of his peak years toiling in Florida instead of in the NWA proper. Alphonso does a terrific job of acting dazed instead of immediately recovering and making pin fall counts. Flair whips Barry into the corner and eats a lariat for his trouble.

Barry might do the crossbody double flip over the top rope better than anyone. They keep pulling each other from getting back into the ring and we get the predictable double count out. This was a really great match until that questionable finish.

So the last three matches had a count out? This was some real shaky booking. It seemed like an ideal time to have Windham take Flair to a time limit draw, which shows he’s on Flair’s level and maintains his stock as a potential future champion. Some fans show their disgust by tossing trash in the ring.

This show had some nice action featuring some of the fixtures of the NWA by 1989, but the three consecutive non-finishes really kept it from reaching a higher level. Still, go out of your way to catch Flair/Windham.