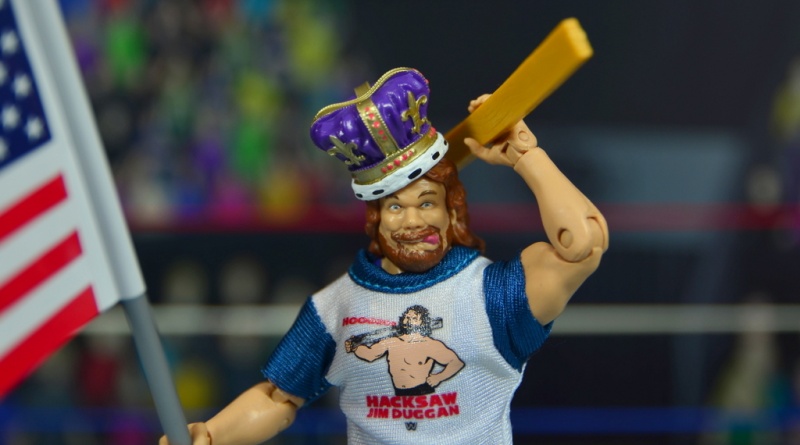 I know some collectors don’t dig relying on them for exclusives, but I appreciate GameStop being more of a player in the figure market. They’re becoming more of a force for WWE legends collectors with their exclusive WWE Retro line. I’m behind a few, but I figured I’d let one of the more recent ones cut the line so it’s time to look at Hacksaw Jim Duggan.

Duggan got an Elite figure years ago as part of Wave 3 of the WWE Legends line. That figure has an extreme expression that didn’t really fit his goofier WWF character. For this figure, Mattel tried to cram a little bit of everything for fans.

Package:  One of the big draws with the RetroFest line of course is the packaging, which is styled to resemble the bio cards of the old arcade game chamber. This hits a nostalgia sweet spot for me and I’m a big fan of this set up.

Likeness:  I mentioned the earlier Legends figure, which was fine, but not really fitting for Hacksaw in his WWF stint. This new head sculpt looks like Duggan just wrapped his interview with a ‘Tough Guy’ and is waiting for the camera light to turn off. It’s arguably his signature expression and the sculpt does it justice.

Rather than going with Duggan’s alternate attire of black tights and white boots, Mattel opted to go with his 1993 outfit. This singlet was right at the time when Duggan was getting phased out and losing more matches than he won. It’s an interesting choice, but this is kind of what Mattel should do with this RetroFest line unless they botched a character’s defining look earlier (Jimmy Snuka). 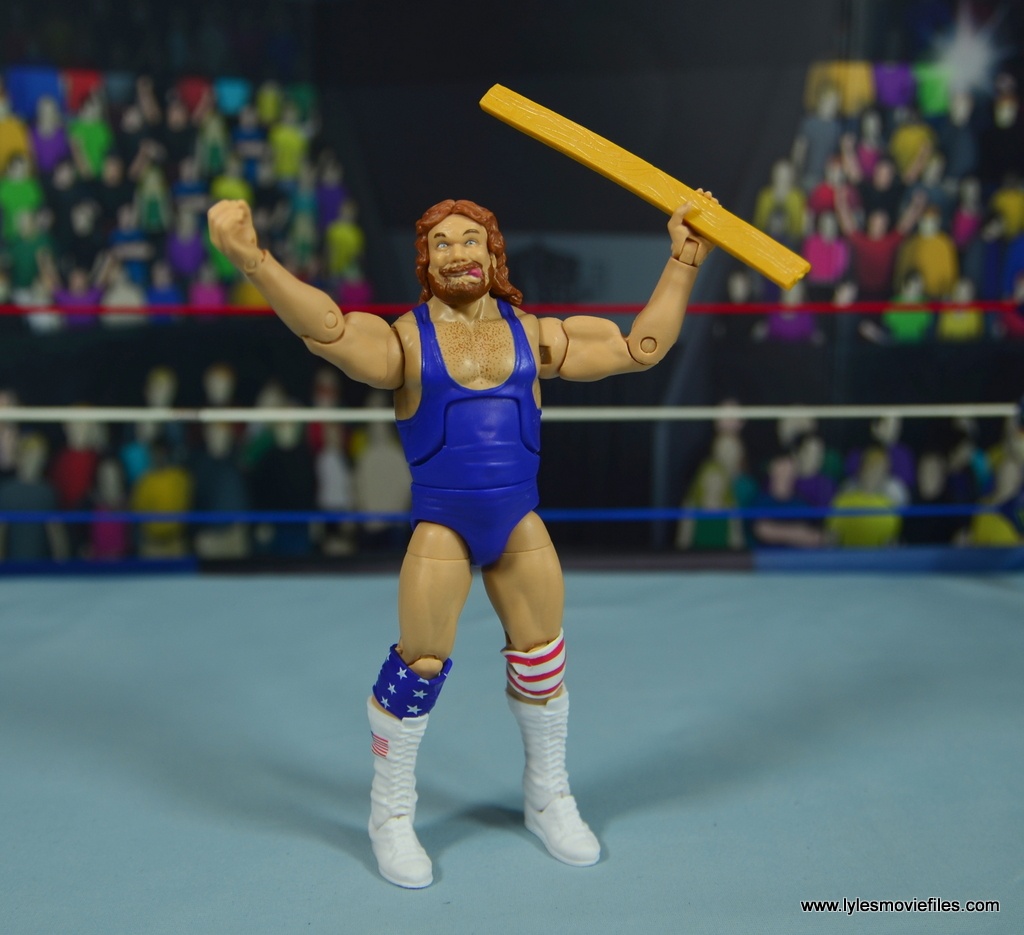 As a very era-specific attire, it’s nice and colorful and stands out. Draping Duggan in a flag doesn’t seem as outlandish as some other characters.

Scale:  Duggan was billed at 6’3” placing him shorter than the 6’4″ Sgt Slaughter and taller than the 6’1” Shawn Michaels. That’s the sweet spot for average guys using Mattel parts. The figure is very flattering to Duggan’s physique as he’s leaner than Duggan ever was in his career. 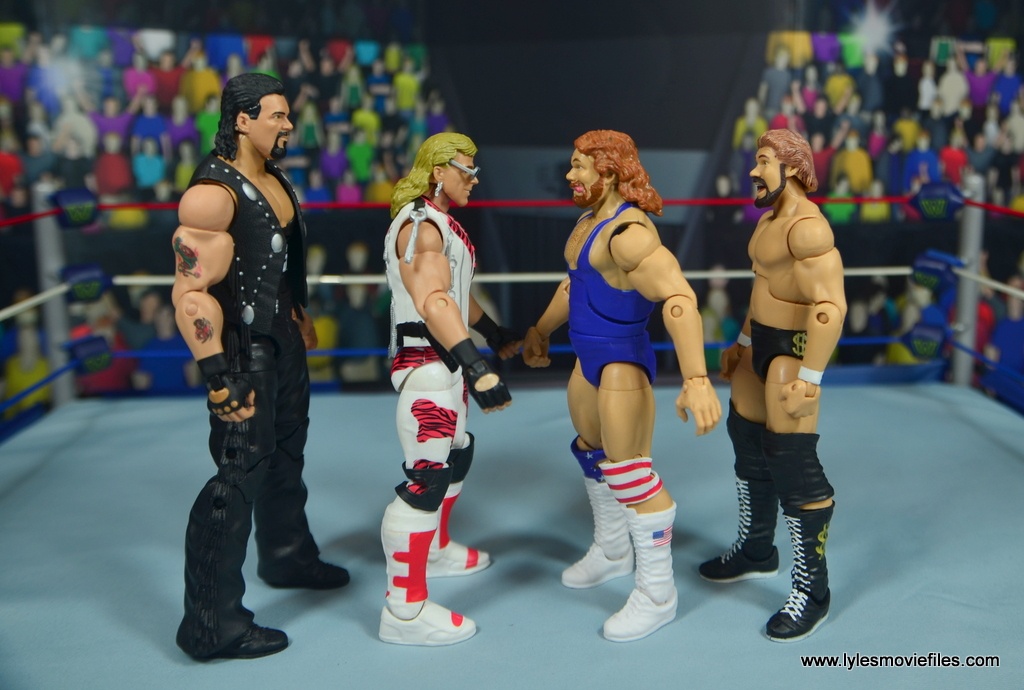 It looks way too slight, which I suspect is from the singlet mold. Mattel probably could have fixed that a little by giving him bigger shoulders like the Jim Neidhart figure. As is, this version looks right around the same size as Michaels, which looks way off.

Don’t pay too much attention to the height difference with the Legends Duggan. I stole his original knees and shins to scale my Mr. Perfect better. He is the same height as the Michaels figure so Mattel definitely made some funky choices when selecting the parts for this figure. They’ve gotten a bit lax in terms of adhering to the tremendous scale they originally utilized.

Paint: Mattel has been kind of hit or miss with this face printing technique. When it’s done right, it looks terrific. When that’s not the case I wonder if they need to reconsider it. Duggan is done right though with solid coverage around the beard and hairline. The eyes are aligned properly…or properly improperly. Ditto for the tongue.

The knee pads are lined up correctly as well. Mattel has done a better job with the right shade of colors for attires and this is a good match for the blue Duggan rocked in 1993.

Articulation: You won’t need Duggan to do a lot of complex moves especially in this 1993 look. He was never a technical grappler, but his move set is basically kicking and punching. That’s no problem for the Elite body and Duggan can be posed to accomplish any of his signature moves. 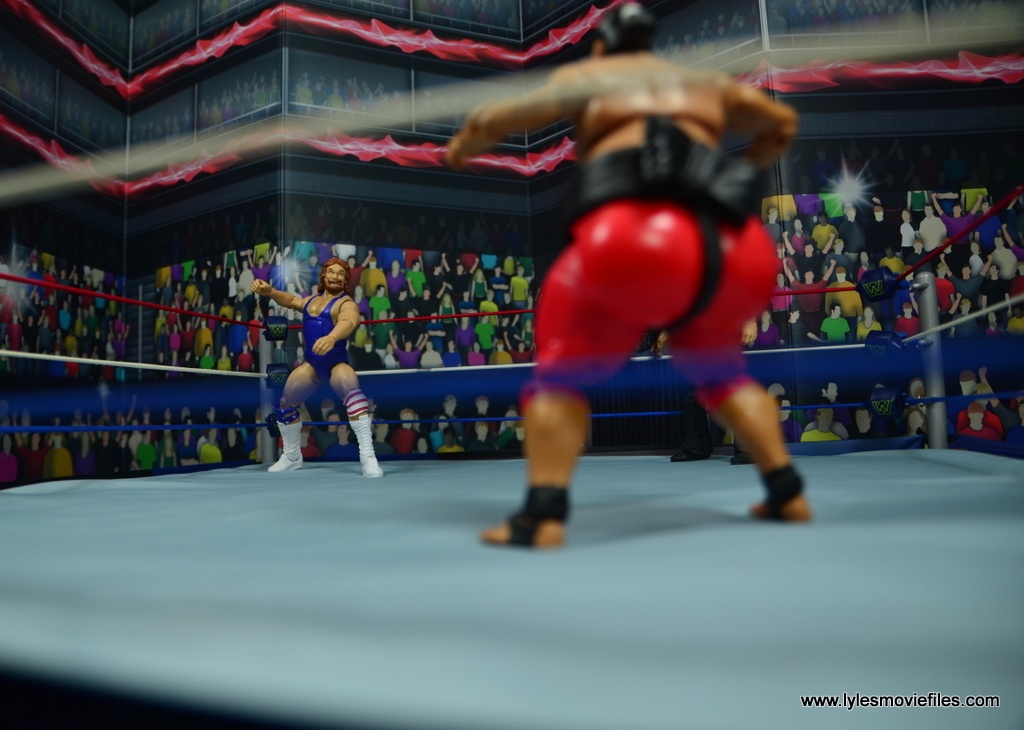 I’d love if the body allowed for deeper poses a la a better-looking football stance, but it’s passable. My figure had a floppy torso, which made it harder than I’d like to hold some poses. 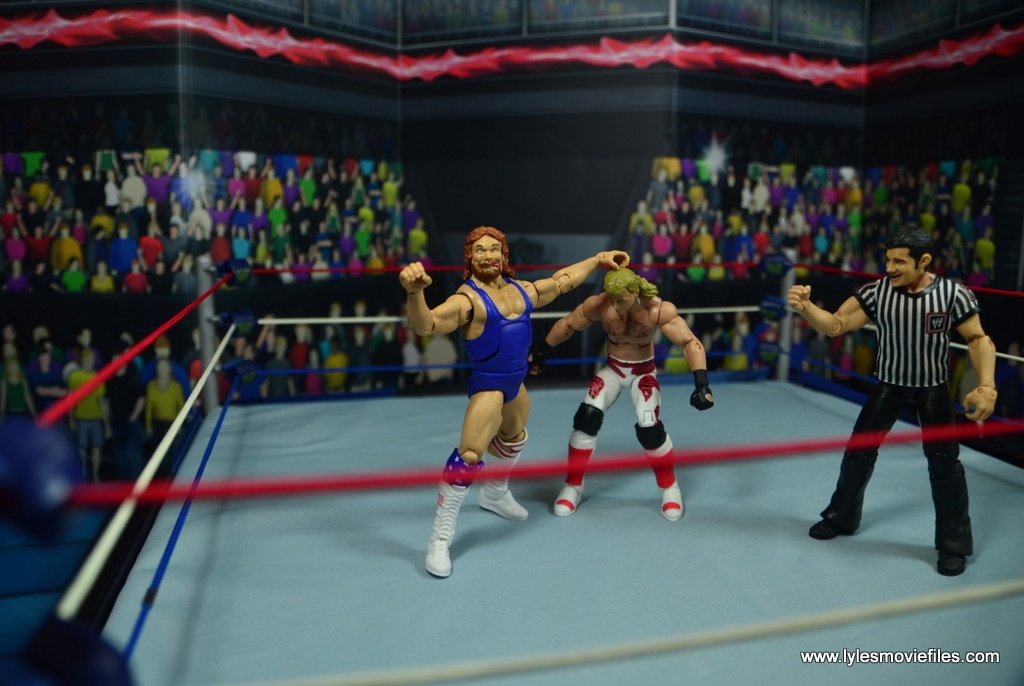 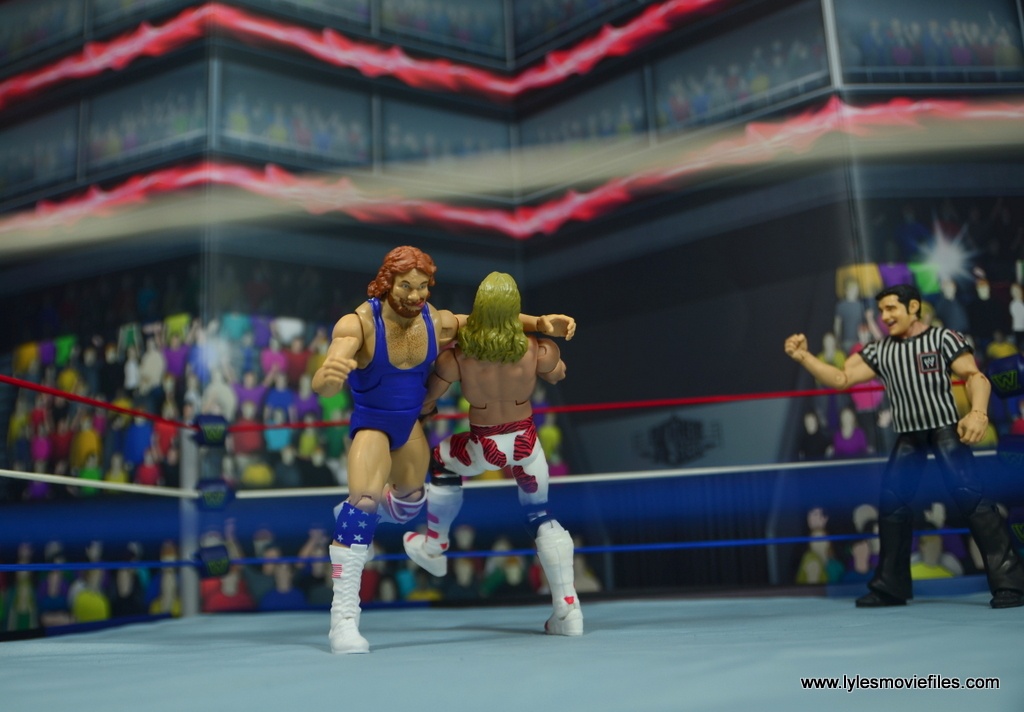 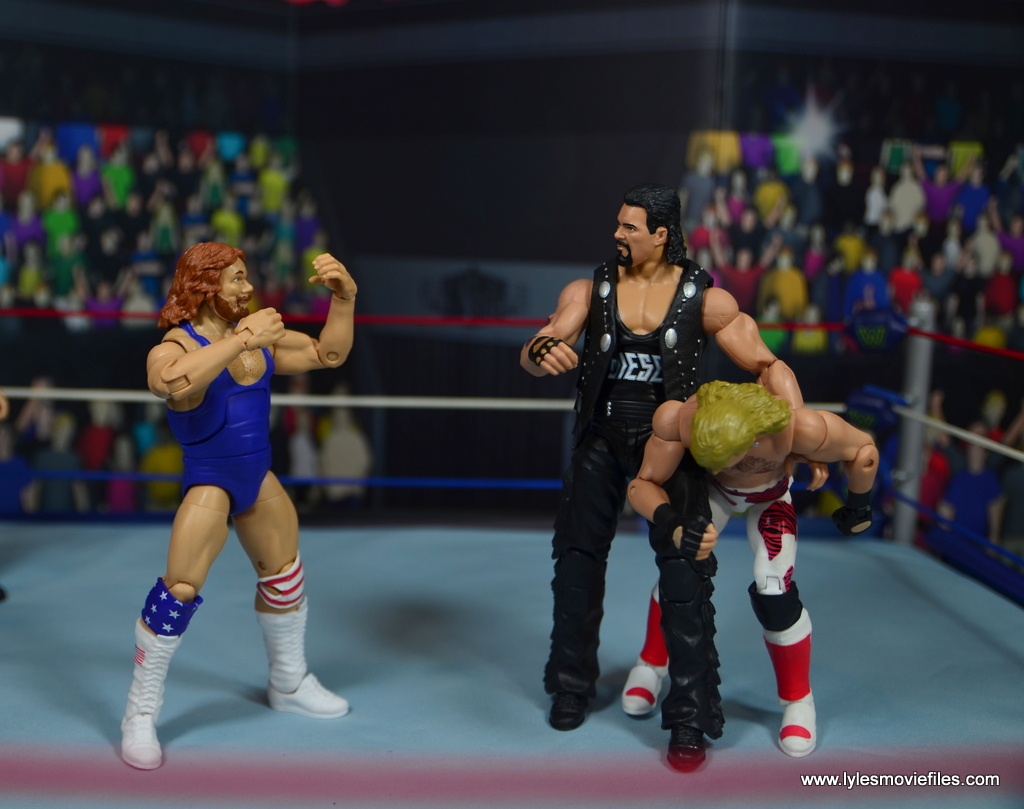 Accessories: Here’s where Mattel really went all in with the figure. Duggan comes with a cloth (!) T-shirt featuring one of his shirts you could order back in the day. 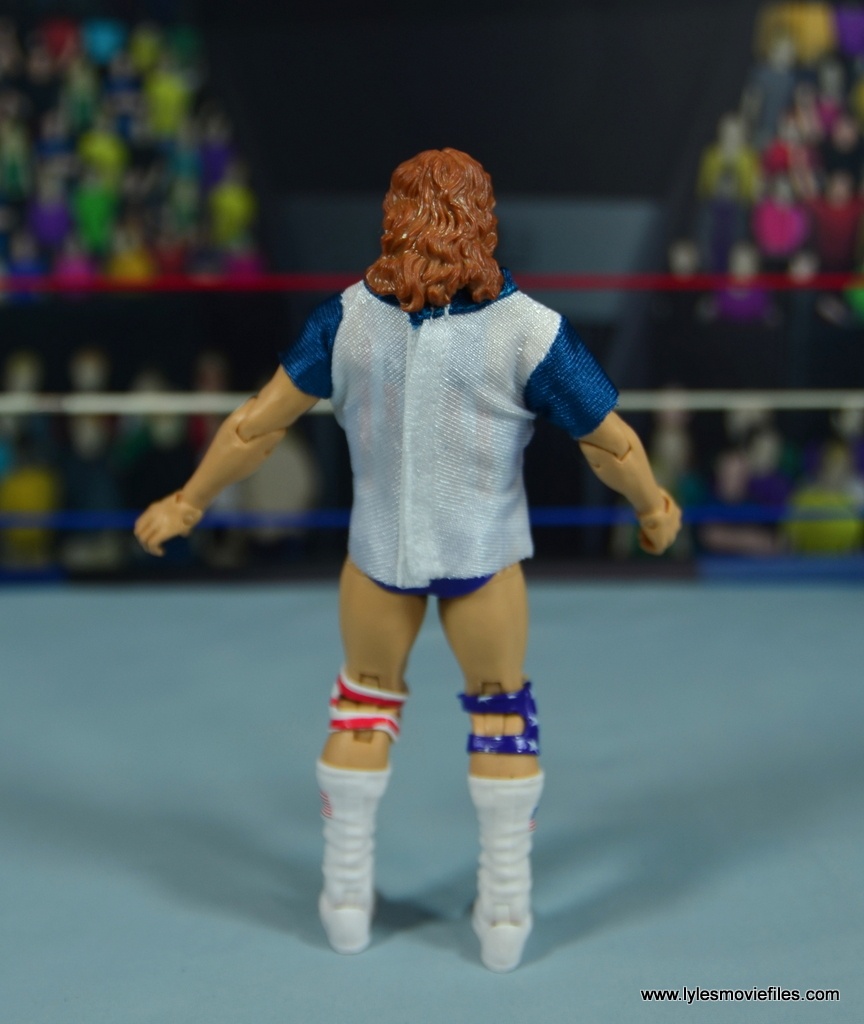 He also comes with a crown from his stint as the King. That’s not accurate with this attire, but you can use it with his older figure. That’s a cool bonus. 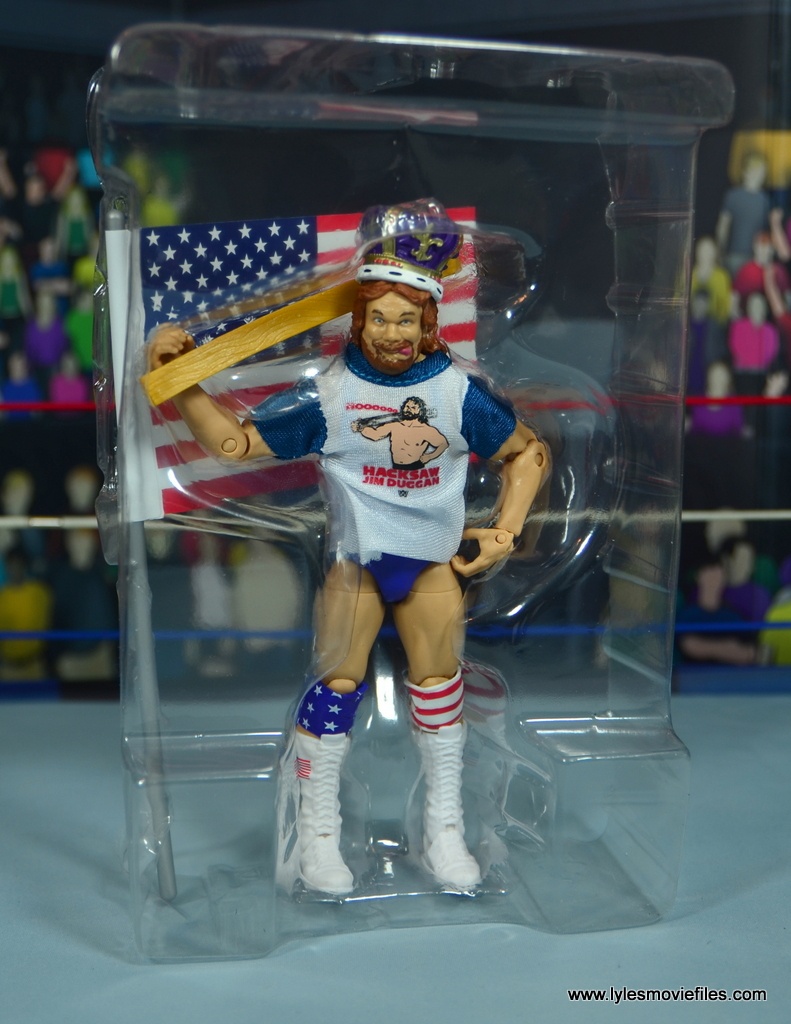 It wouldn’t be a Hacksaw figure without two things and this figure has them both with an American flag and a 2×4. Eventually, the 2×4 will stretch out the hand so make sure to keep some clear rubber bands on hand when it fails to stay in place. 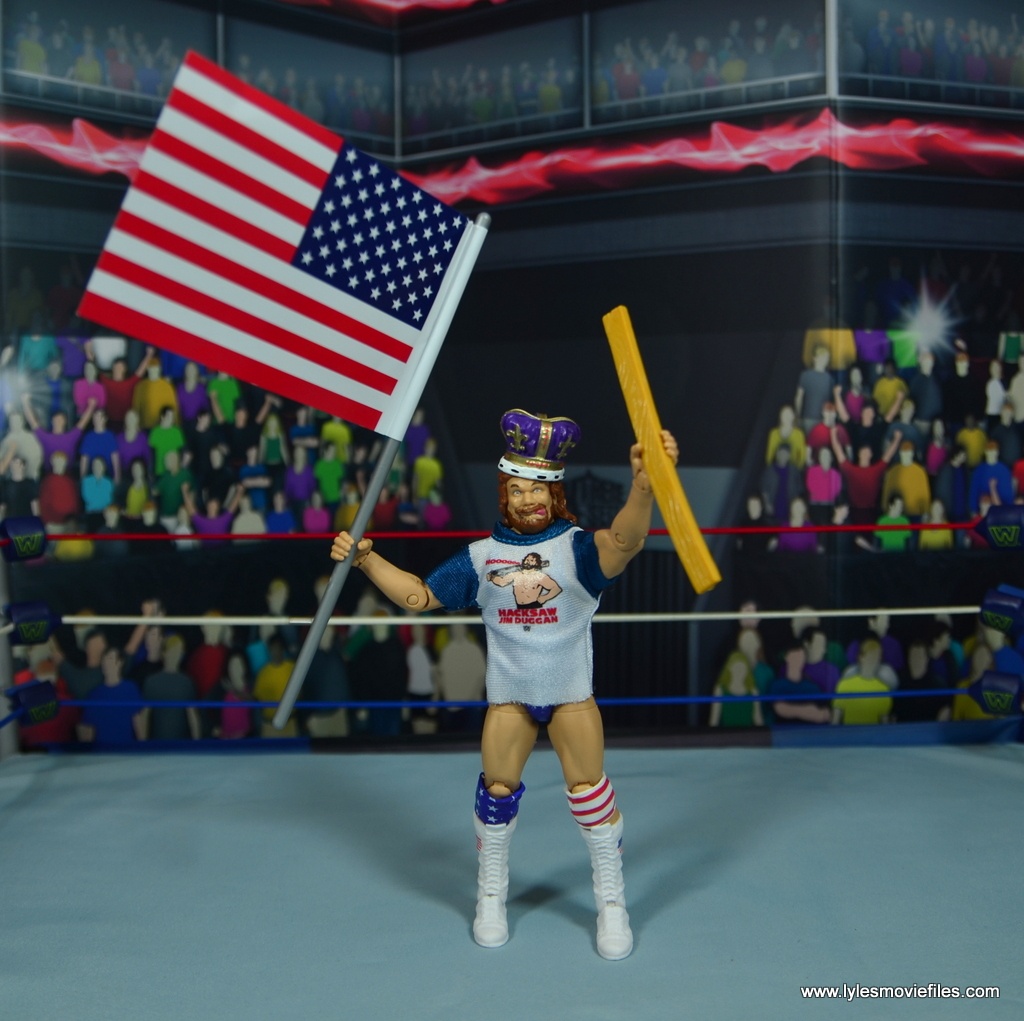 The flag is similar to the others we’ve seen from Mattel — perfectly serviceable and effective. It fits snugly in his right hand. 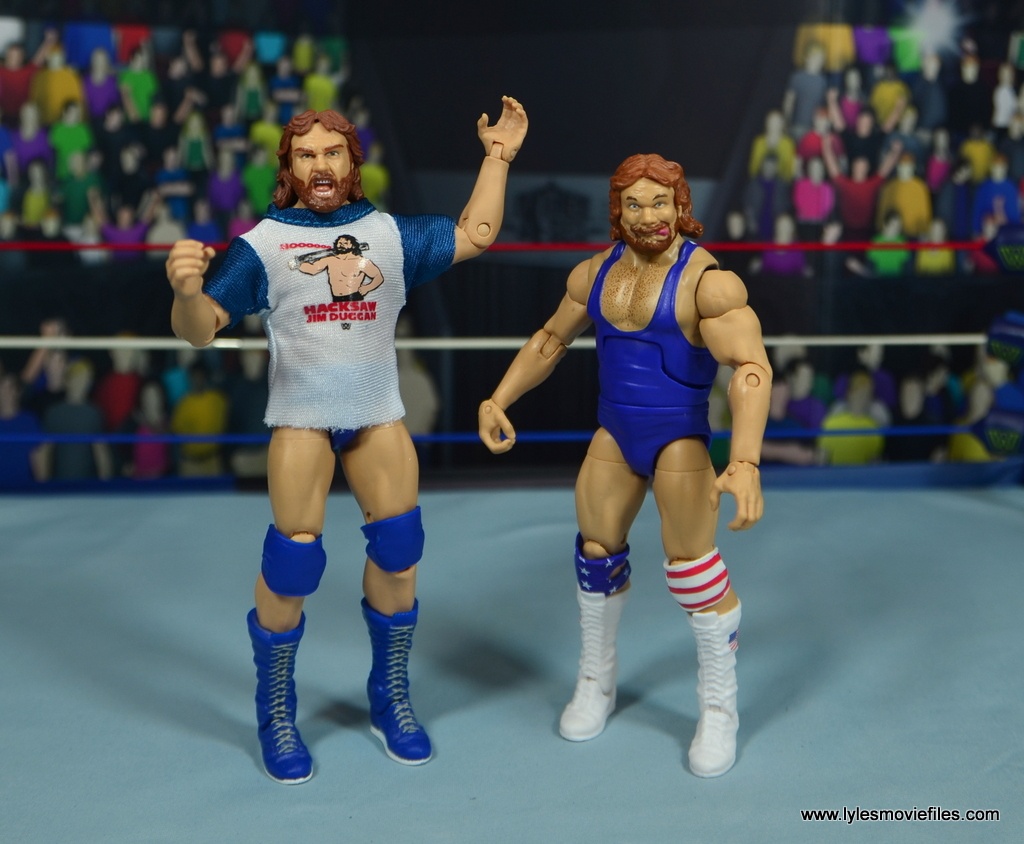 Worth it? At $25, Hacksaw is $5 higher than the usual WWE Elite figure. Does the snazzy packaging justify it? Also, GameStop tends to have decent sales so I’d recommend waiting on one of those deals. No need to pay a premium for a figure that will likely go on sale eventually.

If this figure had a bulkier torso it would have been a perfect 93 era Duggan. The size really hurts the overall look of the figure though and the floppy torso continues to be a problem so I definitely wouldn’t pay full price for it. 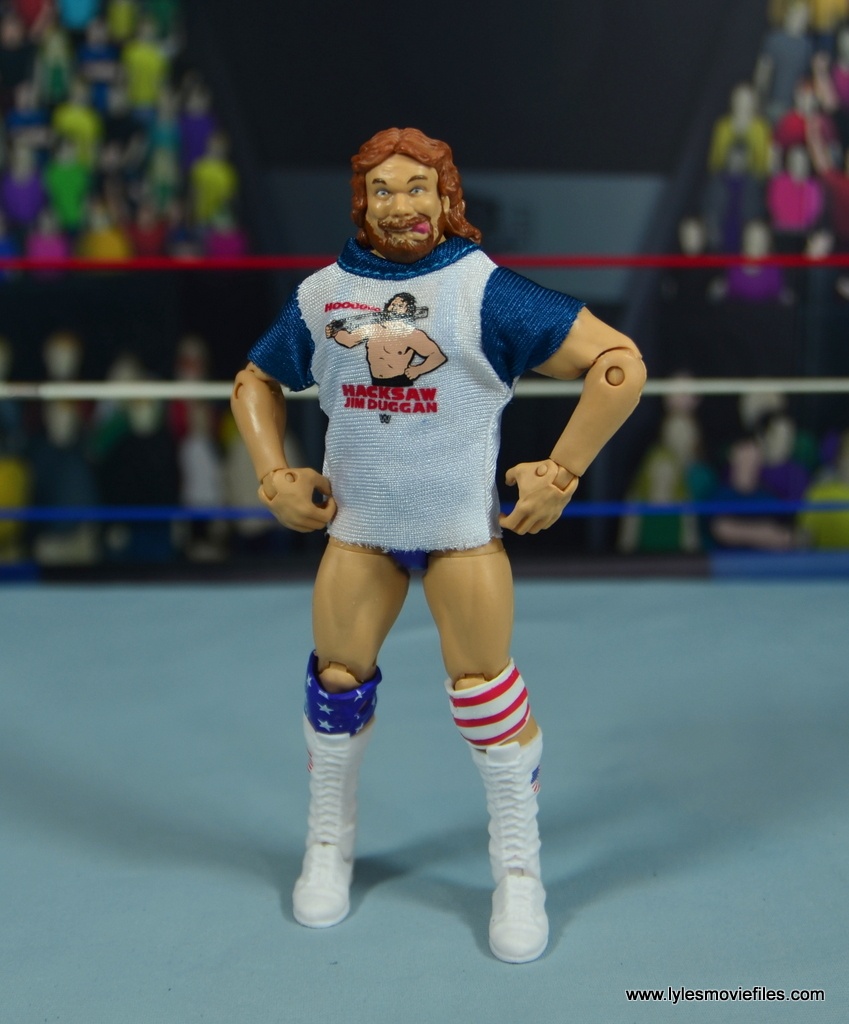 Where to Get It?  This is a GameStop exclusive so unless you want to pay extra on Amazon…