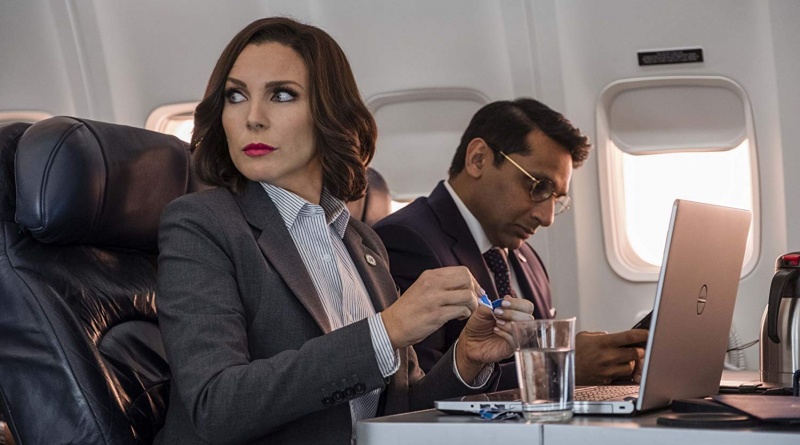 They discussed the balance of getting the tone right, the timeliness of a film about a woman running for president and their ideal running mate if they were to consider a run for office.

What do you think about the positive buzz on the film? It’s trending right near 90% on Rotten Tomatoes? How does that reception feel?

Levine: I never look at Rotten Tomatoes. What is that? (Laughs) No, I was literally just on there saying it’s almost at 90 percent. It’s awesome you know you like to say you don’t really care, but as someone recently who got the green splat, it’s nice.

JDR: It’s funny. I’m excited to see a comedy get reviewed well because sometimes in the cultural, critical totem pole people are almost embarrassed to laugh the experience of laughing makes us feel like we’ve revealed something and there’s something vulnerable about it. It’s very hard to make someone laugh and it’s so amazing when it happens. First and foremost audiences are laughing together and that’s such a great thing, but they’re also invested in the heart of the movie and this is all Jonathan’s keeping the barometer and tone of the movie in mind at all times. There’s just this heart and reality that comes through of when you can laugh and also feel something different. It’s a really special experience for an audience. I think people are really loving it.

Politics are a minefield right now. Why was this the right time to make a political rom-com?

JDR: It really all just came together. The politics of it initially was a bit daunting for us. It was always this script that existed against a political backdrop that illustrated an American fairy tale. In many ways she’s American royalty and it was always this woman trying to get what she wants in this chauvinistic world.  Obviously when you make a movie you hope to hit a cultural moment we did not know it would be so timely. The great way about Seth works you can almost react to things in real time. It brings a little tension when you’re watching the movie and the ability to release that tension and make fun of the crazy s%# that happens every day is probably something like a jolt of electricity.

June, you’ve got the ‘mean’ character role of wanting to keep Charlotte and Fred apart. Did you base that on any real life experiences?

I’ve had the experience of saying something about a friend’s significant other and I will never do it again. You can’t ever really come back from some of the things I offered so I have a policy of not ever saying anything after that. You can’t do it.

I didn’t really tap into that as much as really wanting this historical moment and believing in this person and believing in who she is and what she deserves. That was really the motivation I was working from and it was very easy to both from because I’ve had that experience in our own country of wanting to see a woman become president, but also because Charlize the way she played the character was so easy to want to see her succeed. It was less to me about him and more about her.

It’s a challenge. I didn’t and don’t see her that way I understand that’s the audience perception because the audience is rooting for them to get together and you’ve got this character actively keeping them apart the audience is not necessarily going to side with me, but as an actor that’s not for me to worry about. I understood my intentions and why I wanted this.

The balancing act is always to make sure the heartbeat of the why comes through too and there’s a scene in the movie where you understand it and you understand the relationship of Charlotte and Maggie and the shared history a little bit and you can feel the disappointment. I was very happy that scene was there because without it for me it would have felt like I was playing the same beat, but it is a balancing act, but Jonathan did an amazing job in the edit of cutting my performance, but maintaining these weird lighter moments for Maggie with jokes and making

If you were running for office who would you choose as your running mate?

Levine: I would choose Beyonce because I think it would give me the biggest chance of winning and then my wife.