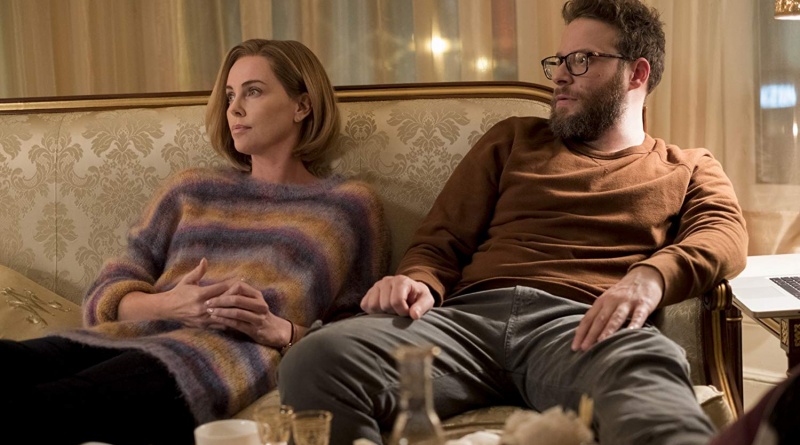 Long Shot is the kind of movie that’s geared in and locked on its target audience. Those who will happily go along no questions asked with the romantic pairing of Charlize Theron and Seth Rogen in a political rom-com that never manages to be as funny, sweet or thoughtful as it intends.

Theron is Charlotte Field, the Secretary of State to Bob Odenkirk’s absent minded President Chambers, who doesn’t want to run for a second term because he’s got his sights on loftier goals. Namely making it big in Hollywood. Screenwriters Dan Sterling and Liz Hannah thankfully don’t go overboard with the Trump analogy.

It felt like a missed opportunity though to have Chambers be more of an obstacle to Field’s end game of becoming president instead of a weak comedic foil. An unrecognizable Andy Serkis (Black Panther) is better used as a rich lobbyist looking to retain his control of the White House. 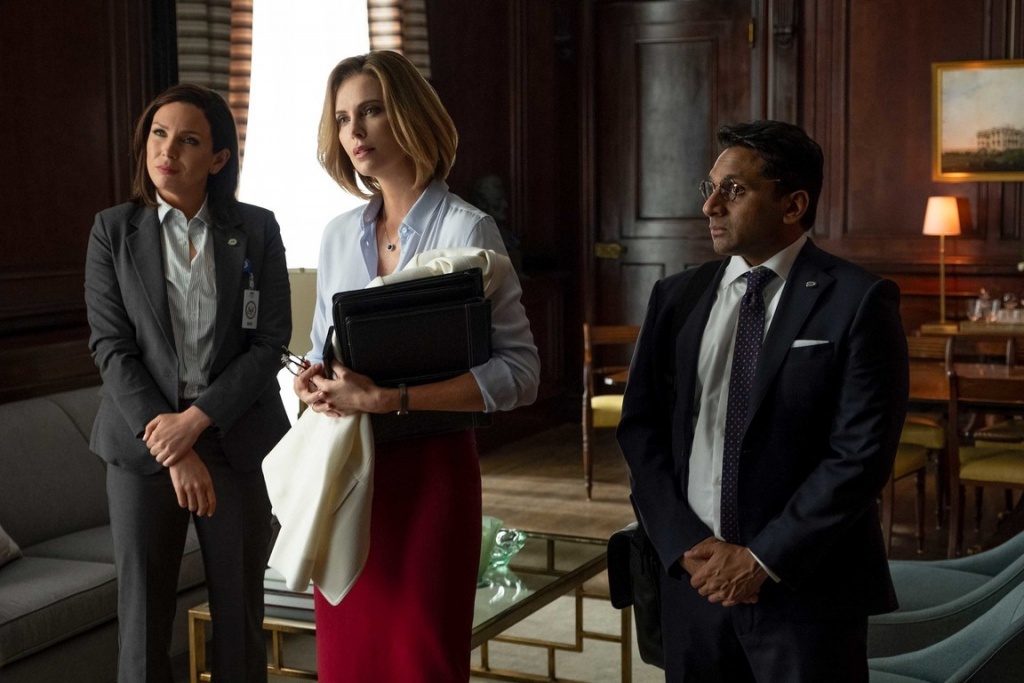 On a lark, Charlotte goes to a fundraiser where she encounters Fred Flarsky (Rogen, The Disaster Artist), an outspoken journalist in between jobs. Charlotte and Fred were neighbors and Fred quietly nursed a major crush. With her early numbers suggesting she needs to be funnier and less stiff, Charlotte hires Fred to punch up her scripts much to the chagrin of her aides Maggie (a terrific June Diana Raphael) and Tom (Ravi Patel).

Soon, Fred starts to connect with Charlotte on a level no one could, even the charming and very interested Canadian Prime Minister (played by Alexander Skarsgard). This is the point the film shatters all hopes of realism. Would even three percent of a thousand women surveyed go for Rogen over Skarsgard? Since it’s a rom-com we know the inevitable next steps, which seem poorly defined even by normal genre standards.

Fred isn’t an outright loser, but besides following Charlotte around like a puppy and mansplaining how she should handle politics, we don’t get a strong case for what she would see in him. At best, Fred is the contrarian voice, but love interest? That’s pushing it.

One of the film’s drawback is Rogen’s unwillingness or inability to play a different character than the same goofy, man-child stoner loser he’s played in all of his comedies. Rogen knows what his fans expect and his consistency is admirable. That doesn’t make him the right choice for the role though.

Rogen basically pulls out his playbook from Knocked Up, another film where he was paired with a woman way out of his league and bumbled through it for our comedic pleasure. It feels a little lazy, but for those who haven’t grown tired of Rogen’s shtick, they’ll probably enjoy his antics.

CBS made a sitcom empire over the last 20 years pairing dorky and doughy guys with beautiful model types so this dynamic isn’t anything new. It’s more that the trailers show exactly how this movie will play out with Rogen pulling out his Muppets voice to over emote while Theron has to be enlightened and charmed. Still, I developed a greater appreciation for Theron’s acting skills here. It didn’t make the Charlotte/Fred romance any more believable, but not from her lack of selling this outlandish relationship. 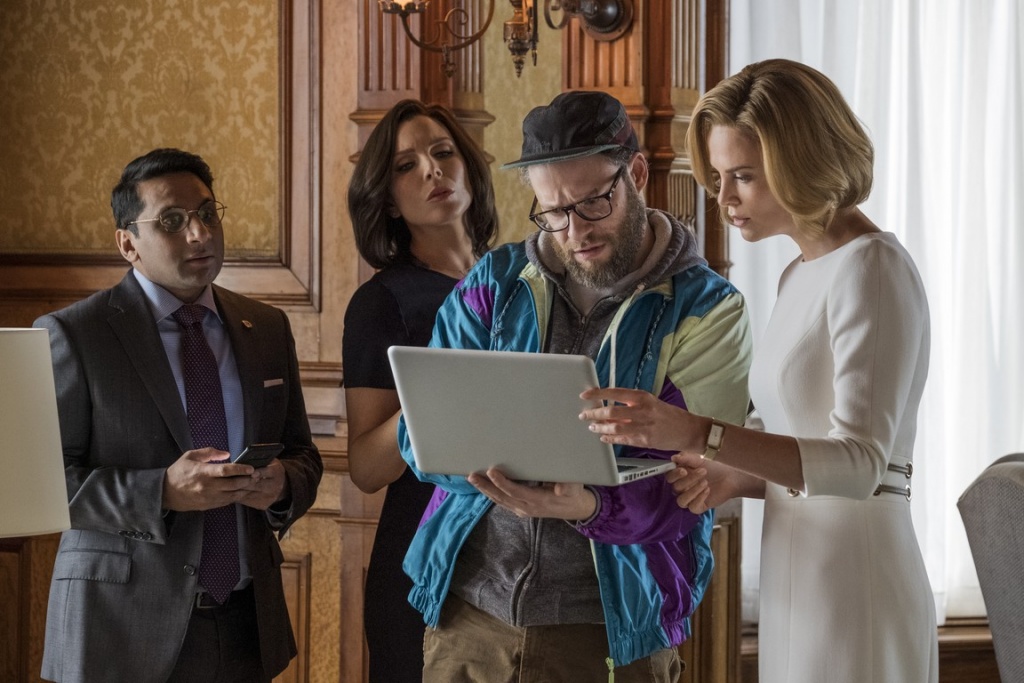 At just over two hours, the film starts to feel its length midway through during the obligatory Seth Rogen gets high and wasted scene. Maybe this will seem fresh for folks who haven’t seen Pineapple Express or This Is The End, but Rogen’s just playing his greatest hits that were never that great to start. This was the biggest point in the film where it felt like Director Jonathan Levine (Warm Bodies) lost his way and indulged Rogen just for fun.

Despite my constant frustrations with how the story was playing out, there were some good laughs, mostly found in the few genuine moments that weren’t focused on Fred getting with Charlotte.

I literally cringed when Fred’s best friend Lance (O’Shea Jackson Jr.) randomly exclaimed ‘Wakanda Forever.’ It was if Sterling and Hannah tried to be hip and remembered they saw black people saying the Black Panther catchphrase and thought it would be appropriate. It wasn’t and makes the film come off as hopelessly out of touch.

That’s not the only area where the script seems to be sadly unaware. It’s Charlotte who has to make the big concessions to maintain the relationship while Fred starts and remains an opinionated slob. Would it have killed him to wear a suit and try and look the part? That’s really not that much to ask. Fred is the guy that goes to the office holiday party with a tuxedo T-shirt without trying to make an ironic statement. Naturally, Charlotte has to dress down to relax on Fred’s level instead of him stepping his game up at all. 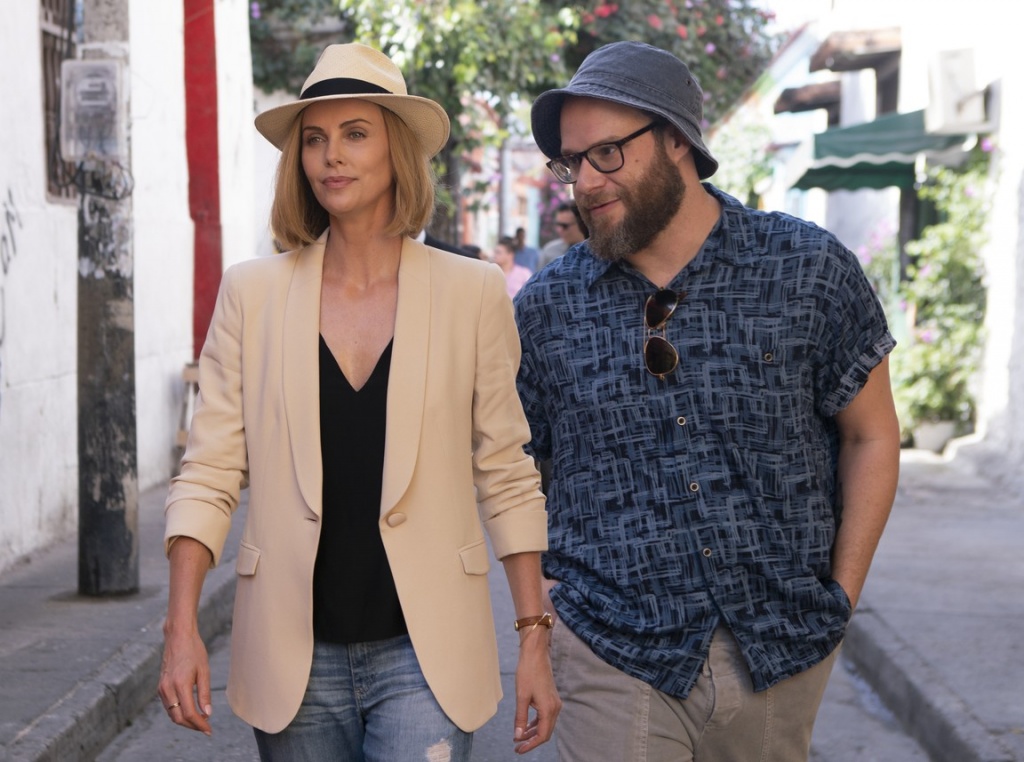 Long Shot’s biggest issue is the film is positioned from Fred’s perspective while Charlotte’s legitimate historic agenda is the subplot to if this slouch can land the future president. The audience is clearly being steered to taking Fred’s side even when Charlotte is the only one with anything to lose.

This movie has an interesting premise and could have worked so much better with a tighter focus on Charlotte and the ridiculously silly, yet real challenges a woman candidate would endure even before her dating life becomes a TMZ headline.