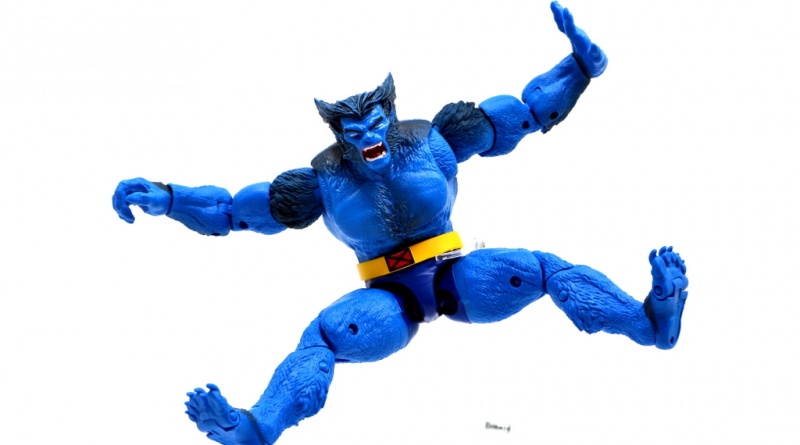 Easily one of the biggest surprises of last year’s con season was the third wave of X-Men Marvel Legends featuring some highly desired characters and the final members of the X-Men Blue Team in one swoop. Since this wave is clearly cutting the line of other backlogged Marvel Legends to review, I figured I’d kick things off with Beast. 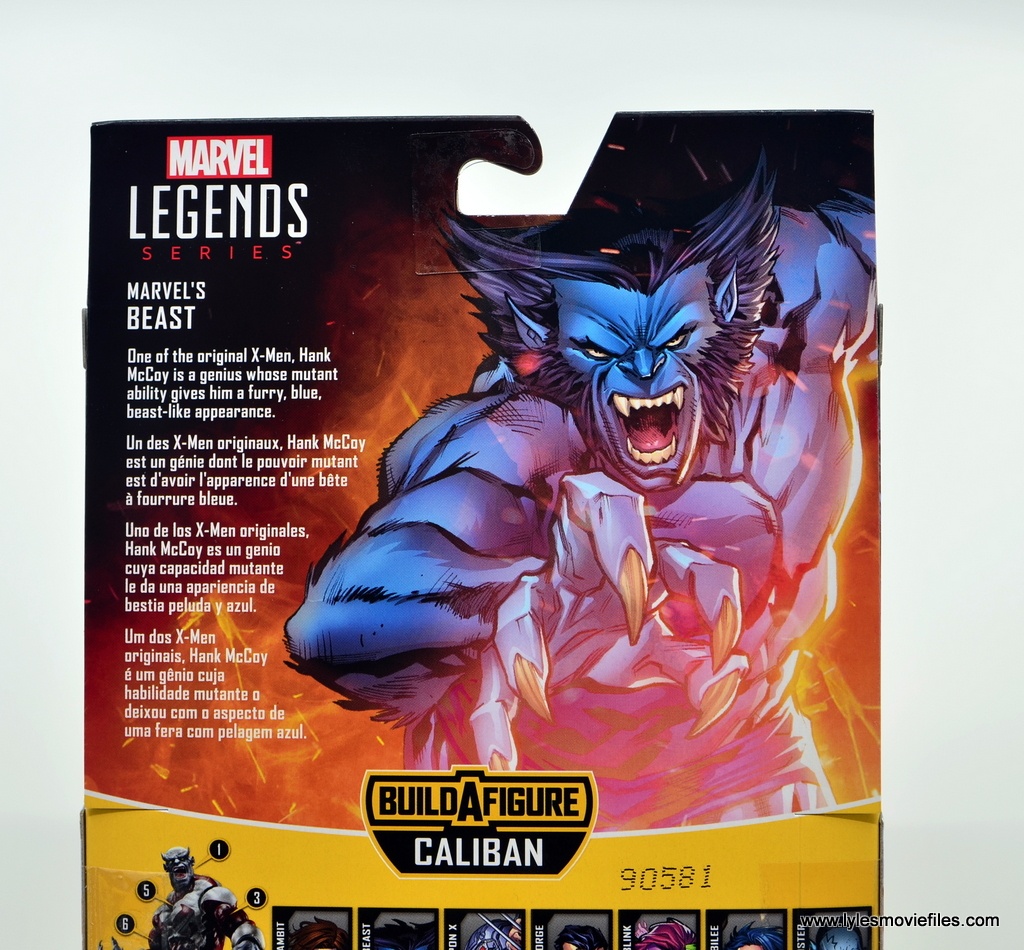 Packaging:  Nothing real fancy here. It’s the same packaging we’ve seen for awhile with gold accents for the X-Men wave and a color side portrait. I think I prefer the old one color side portraits for consistency sake. The bio actually sums the character up well although his mutant abilities weren’t the cause for his blue and furry appearance unless that’s been retconned? 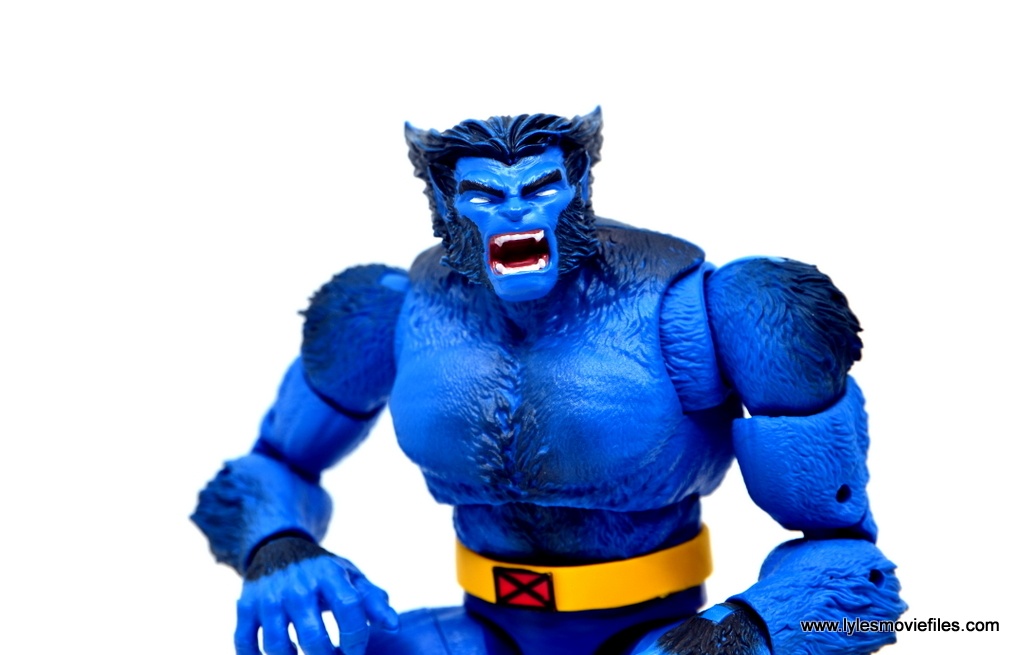 Likeness:  Beast’s look has been the matter of some discussion online and it’s largely due to the lack of something as opposed to anything being wrong with it. This take on Beast is pretty much a perfect Jim Lee version of the character. From the wide shoulders, big thighs and barrel chest, there’s no mistaking this for another artist’s interpretation. 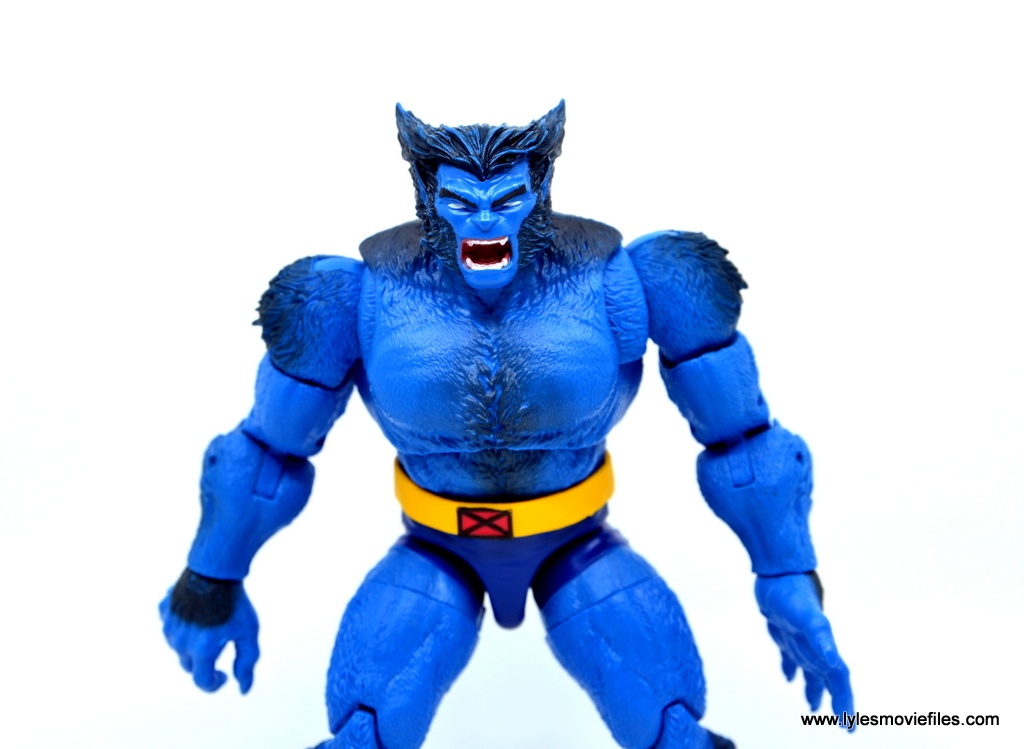 Maybe that wasn’t the best way to go though since Beast has also been a member of X-Factor and the Avengers with this same basic look same this ferocious head sculpt. 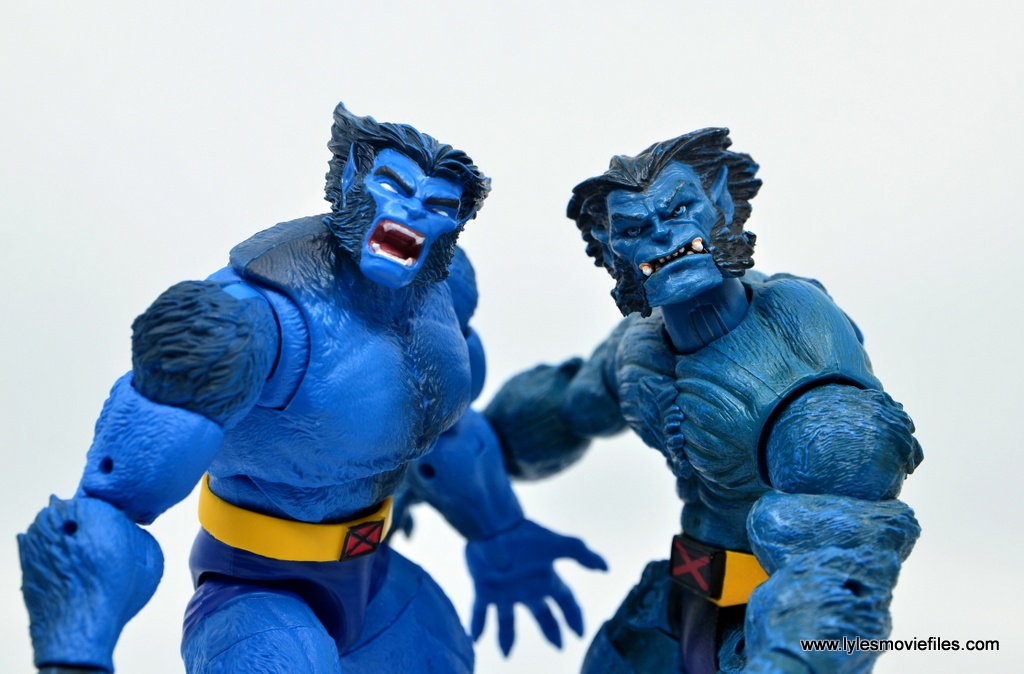 Again, that was a common portrayal in the Lee X-Men portrayals.

The rest of the figure is outstanding from the furry sculpting, the thicker tuffs of hair along the shoulders, chest, forearms and shins. Maybe he’s a tad wider than I envisioned, but this is me trying to fudge him in with pre-Jim Lee appearances. For this era, this is great. 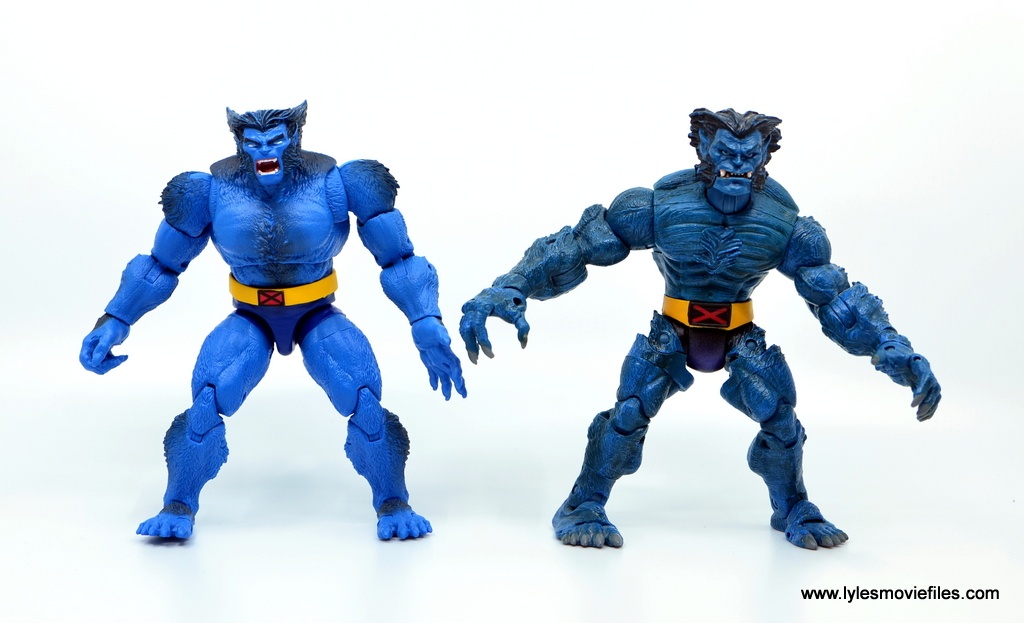 Scale:  Beast rarely is drawn standing. He’s much more of a crouching type guy so his stature doesn’t matter in that regard. But he stands about the same height as Sabretooth — a taller than average ML and towers over most of the X-Men. For accuracy’s sake though, you’re more likely going to have him squatting so his height won’t matter. 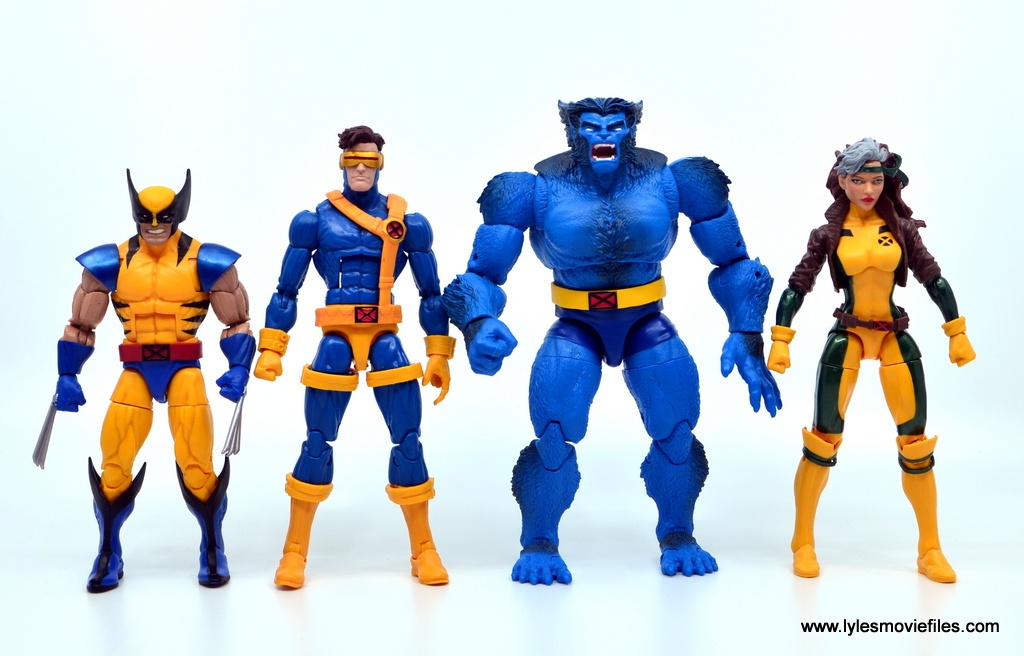 Paint: Hasbro didn’t just write it off with one shade of blue paint and call it a day. There’s some sections — mainly the thicker hair portions — that have a darker blue grey shading. The blue shorts are a distinct shade so we know he’s wearing something to cover Lil Beast.

I’ve seen two Beasts so far and both have had varying issues with the mouth, specifically the teeth area. The X-buckle isn’t perfect either, but these are easily fixed items. 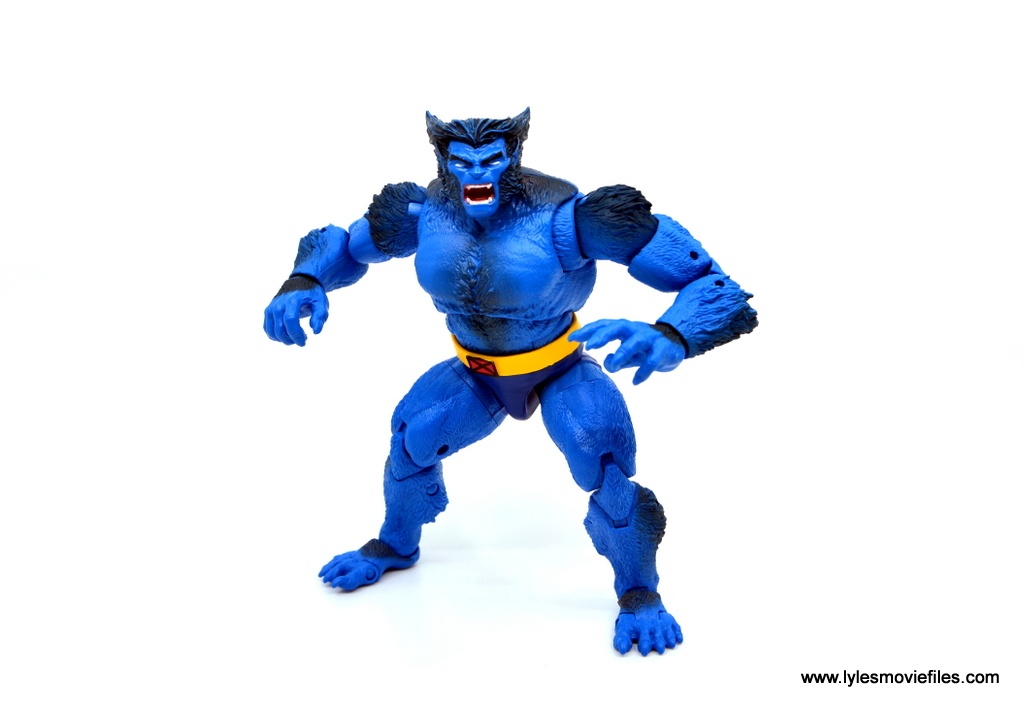 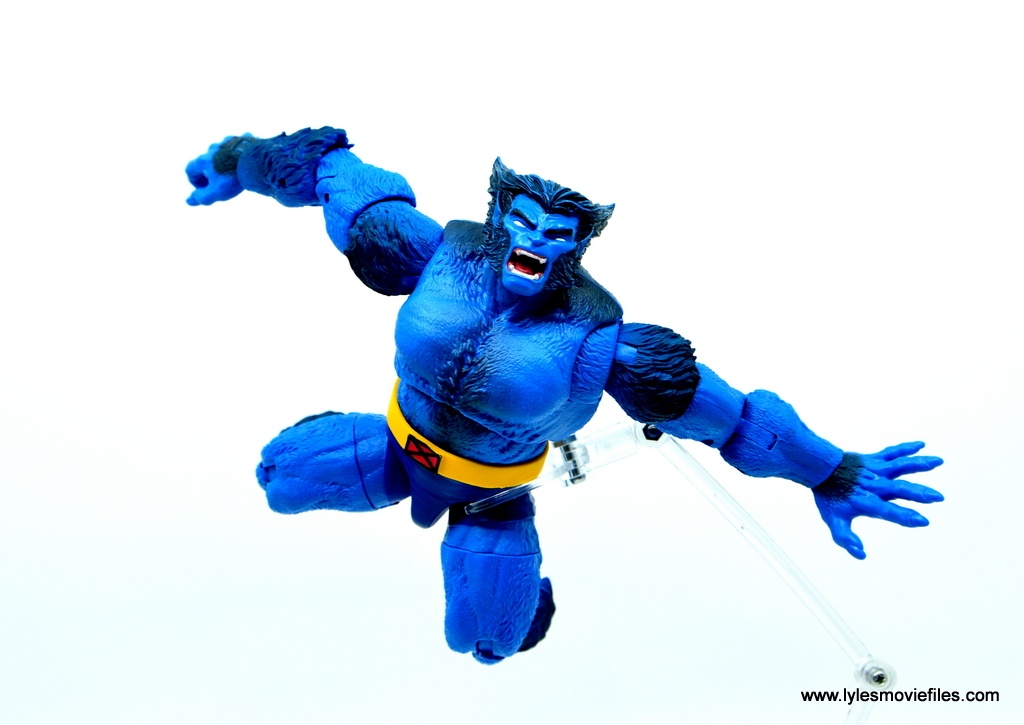 Articulation:  One of the tricky things with the Toy Biz Beast was the articulation scheme prevented accomplishing more of the common Beast poses. That figure had exceptional articulation at the time, but it hasn’t aged well. It made for a great yardstick for Hasbro engineers to surpass to provide us the Beast articulation we’d need in 2019.

In short, this figure is one of the best Hasbro has ever made from an articulation engineering standpoint. He can be posed balancing on his toes and his left hand in a trademark Bouncing Beast pose. 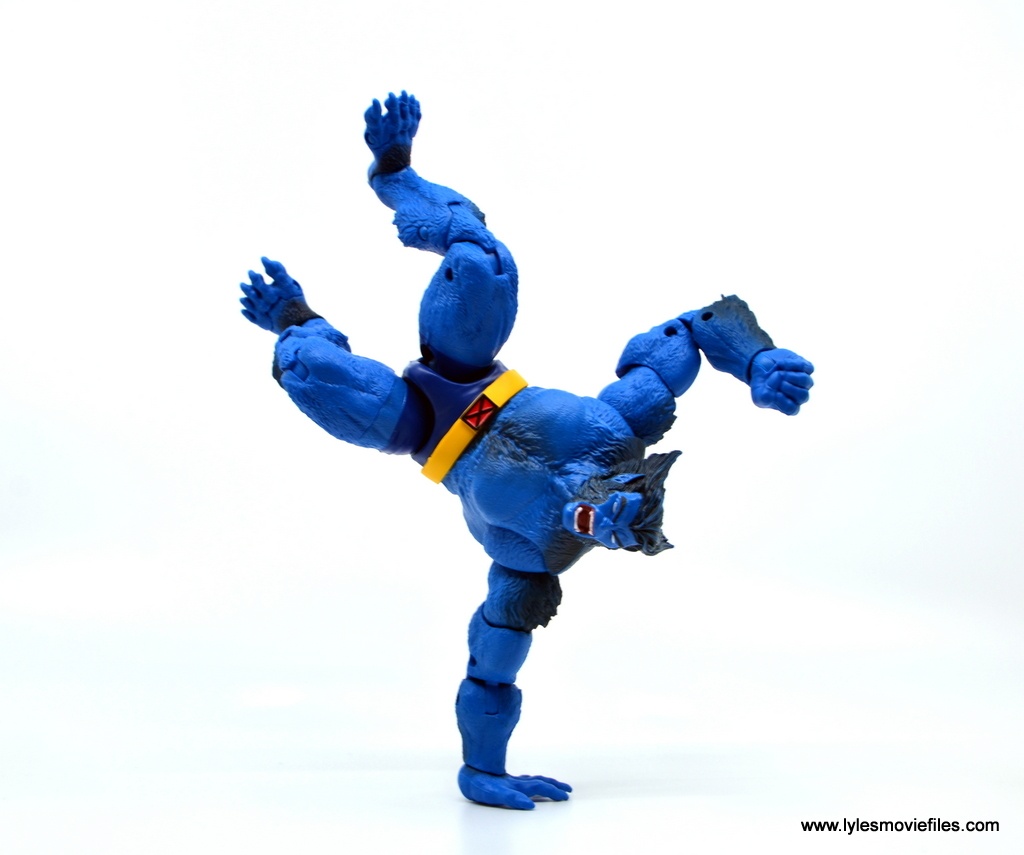 His legs are wide enough to wrap around a character and hit any number of poses. He’s going to be one of those figures I’m constantly moving around and repositioning in my shelf. 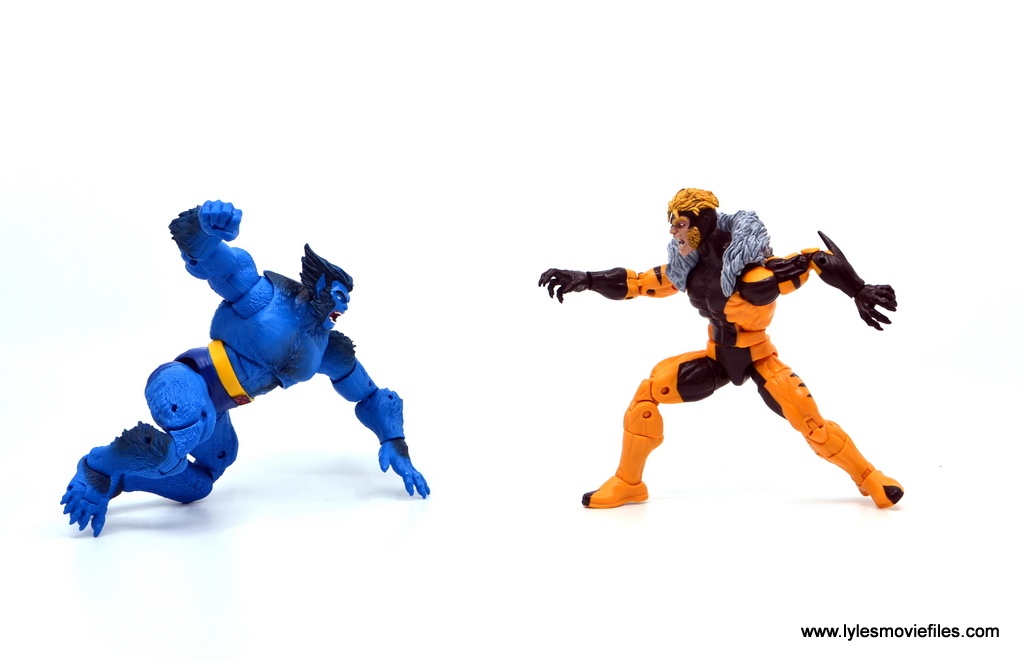 There’s also some extra hidden range in the legs and waist requiring slight pulling to adjust for some bonus movement. Hasbro really outdid themselves here. 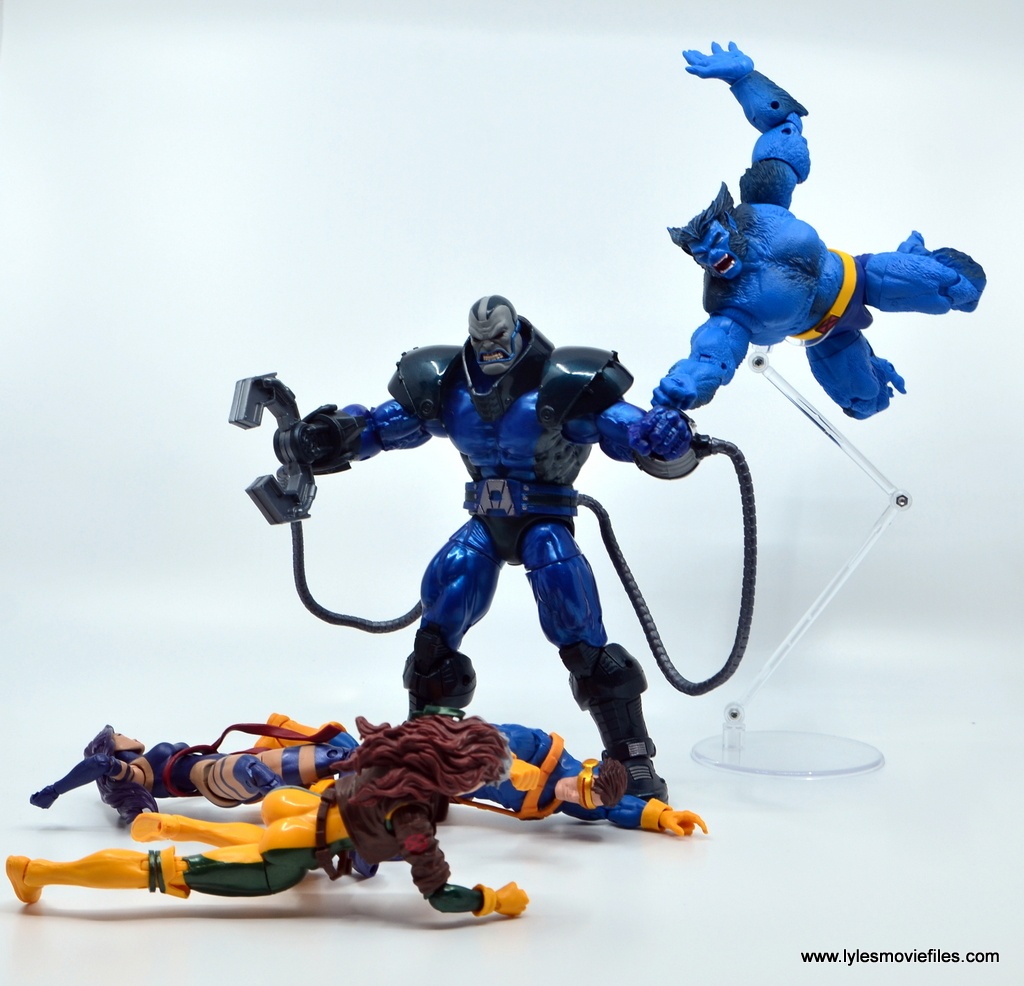 Accessories:  Hasbro nearly gives us everything we could ask for with this figure. Let’s start with the positives first. Beast has an alternate right hand fist and a

Considering The Thing figure, which was also a pretty hefty figure, received two alternate hand sculpts and another head, it shouldn’t have been an issue. 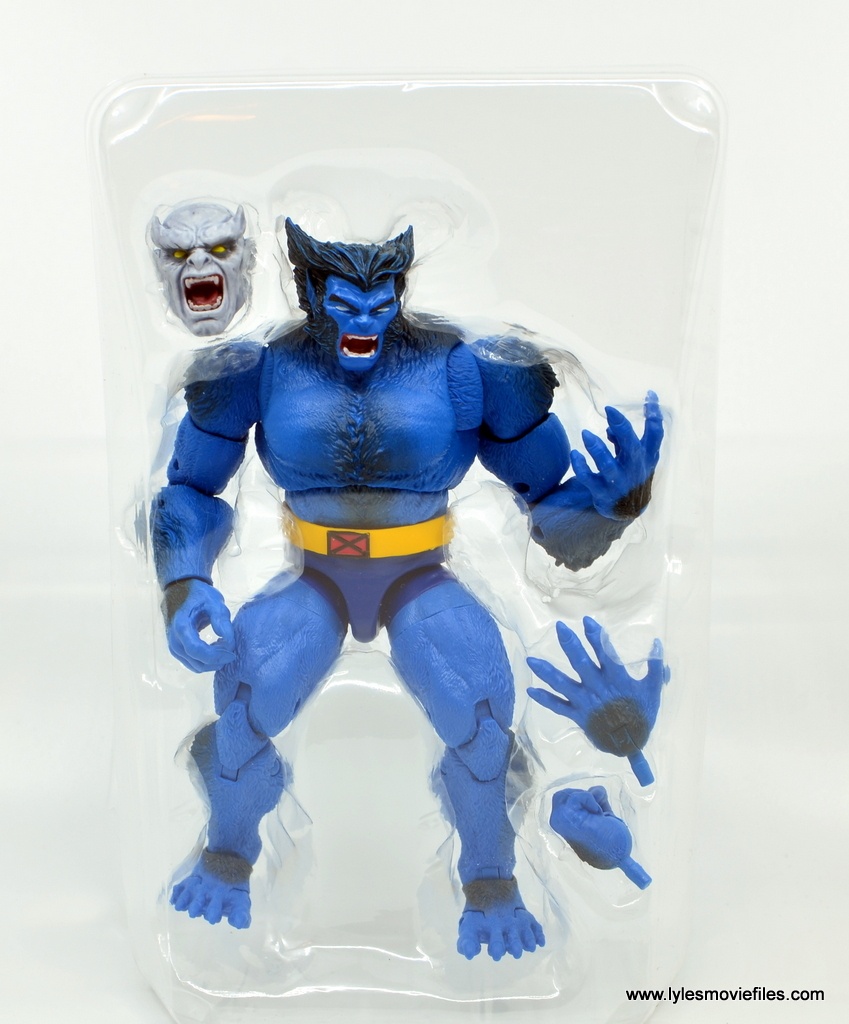 Granted, Beast comes with another head — for the BAF Caliban — while Thing didn’t have a BAF part so maybe it’s a two heads, two sets of hands package deal?

Of course it would have been great to get Beast with a slightly less intense head sculpt. Maybe a smiling or stuck in the lab trying to crack a formula expression? 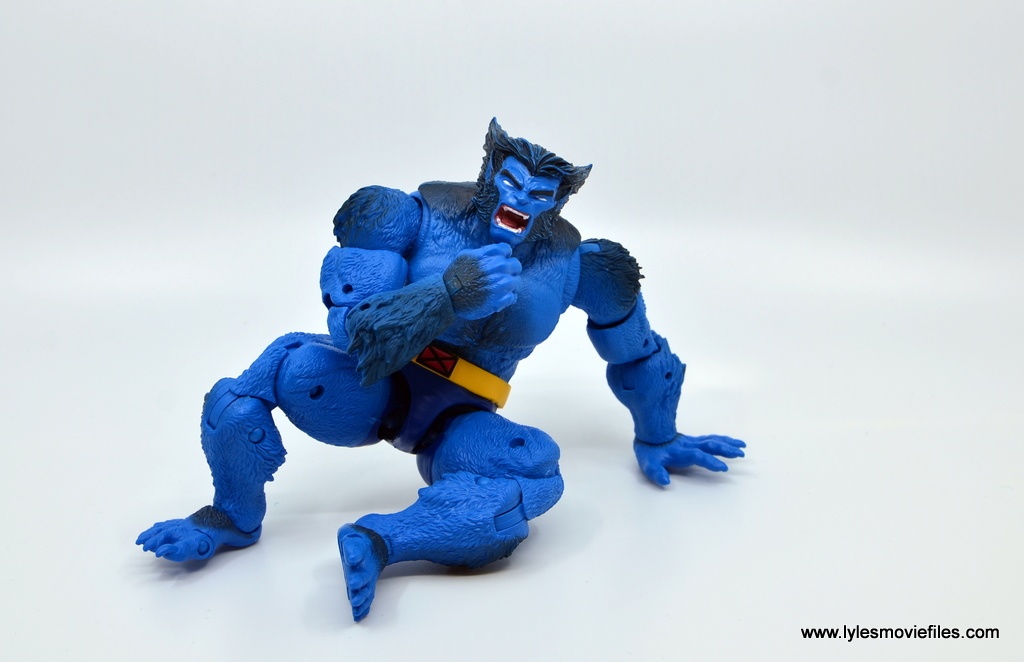 While we’re at it, it also would have been cool to get a cloth lab coat. Maybe that can be in a Vintage wave for 2020? 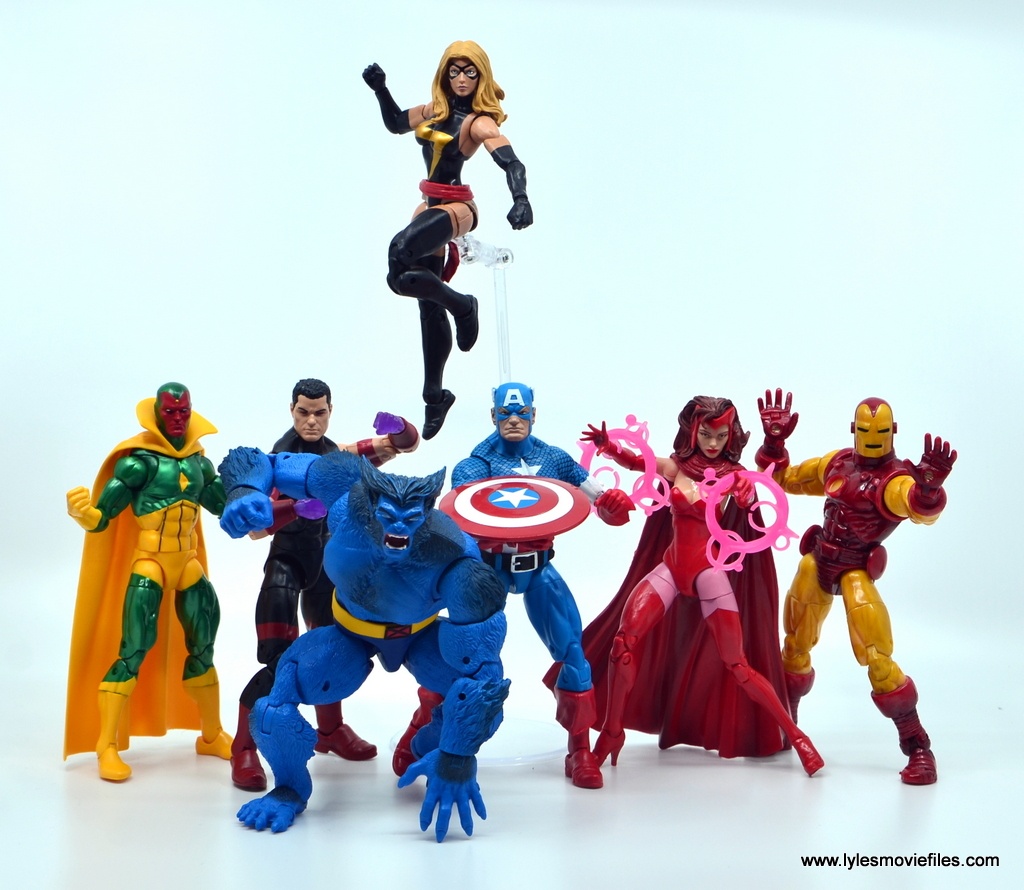 Worth it?  At $20, this feels like a steal. Beast is not a small figure and he’s got some of the best articulation we’ve seen in the line. He’s got a small BAF piece, but this value is great for the standard price point.

I wanted an alternated head sculpt, but I won’t hold it against this figure, which is everything else I wanted from this figure. 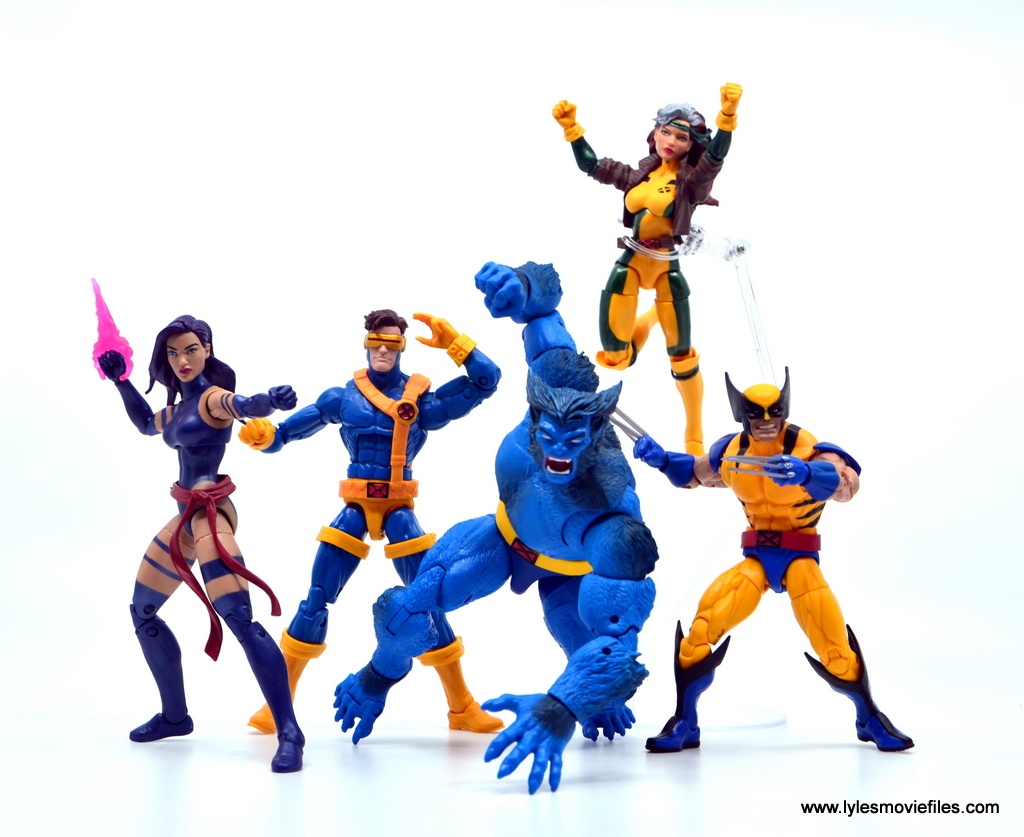 Where to get it?  There’s a lot of viable options. Wal-Mart, Gamestop, Walgreens and Best Buy have the Caliban wave so check those stores. Online you can try Hasbro Pulse, which has had Beast in and out of stock.  Amazon has most of the line in stock, but Beast is one of the more popular ones so you’ll have to stay on the lookout.