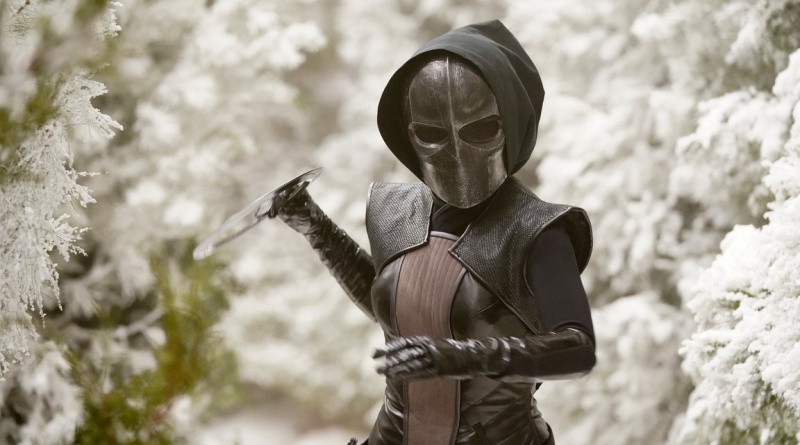 After moving, my DVR lost all of my content specifically the backlogged Agents of SHIELD and Black Lightning episodes I needed to catch up on. With Game of Thrones now wrapped it’s time to get back to these older episodes and hopefully catch up to AOS’s sixth season at a somewhat reasonable timeframe so prepare for a slew of these reviews. The Honeymoon was a nice return to the series for me as it was a great reminder of why AOS is one of the best comic book based shows on TV.

Coulson and Talbot are on the run from Hale’s forces including her assassin daughter Ruby. But since their getaway took them on a snowy mountain, keeping their tracks hidden proves impossible. Good thing Daisy, May and Deke cut Ruby off before she starts maiming folks.

Ruby’s been itching for a chance to battle Daisy, who to her credit fights without powers way longer than I would’ve against this pint-sized psycho. Before Daisy can take Ruby in, Hale and her forces arrive and shoot Deke. I’d come around on Deke — not to the levels of Ralph on The Flash, but I’m not finding him nearly as annoying as I did earlier this season, which is a big win for him. Still, this seemed like forced drama as their was no way he was going to get killed off so unceremoniously.

Mac actually has to handle the surgery to patch Deke up with Piper’s guidance since Fitz and Simmons are off with Yo-Yo tracking down a lead to hopefully change their destiny. This did lead to a funny exchange where a doped up Deke starts blabbing about wanting to kiss Daisy and pondering if he should shave his head to look more like Mac.

Talbot has a heart to heart with Daisy and apologizes for his role in SHIELD being back on American’s Most Wanted list again. Daisy considers his request to talk to his family, but thinks it’s risky with Hale’s crew still looking for them.

May confronts Coulson and reveals she loves him. This stuns Coulson enough that he can’t finish making his big speech about sacrificing himself for the greater good of the team.

Werner Von Strucker meanwhile is more of the show not tell phase of his love for Ruby and breaks her out of her room/cell after being chewed out by Hale. I wasn’t sure if Ruby and Hale weren’t just playing Werner until Ruby suckers Hale in and seals her in the room/cell. Hale is a far better villain than either Ruby or Werner so hopefully she won’t be sidelined too long.

Yo-Yo, Fitz and Gemma arrive at the Hydra base looking to shut down the gravitonium device. With that destroyed there’s a chance to alter the future. Of course that was before Anton the invincible shows up with some of his security goons. Yo-Yo can’t end the fight in a flash thanks to her nerve synapses backfiring with her new robotic arms. That’s a smart side effect and I appreciate AOS not making her a super cyborg right away. This learning curve is important.

Fitz and Simmons don’t want her to get caught even if it means staying behind. I dig this new Mr. and Mrs. Smith dynamic of FitzSimmons. Too bad that whole Mockingbird and Hunter spin-off never panned out, but at least we’re getting some idea of how that would play out with Fitz and Gemma.

Anton catches up with Yo-Yo and we get a fight better than pretty much anything I saw all season on the Arrowverse shows. I’d forgotten how much well done the fight choreography was on this show. While she can’t use her superspeed, Yo-Yo does manage to outmaneuver Anton and crashes him through a window. That’s enough to take out all of his robotic goons and save Fitz and Simmons from that problem. Only catch is Ruby and Werner arrive at the same time and they want them to fix the device.

Daisy does manage to find a way to get a coded message so Talbot can talk to his wife. She starts reciting a message from a script provided by Hale’s right-hand. On one hand this was a smart backup plan by Hale to make Talbot her Winter Soldier style puppet, but it was a little convenient that at the same time Daisy is able to get the call through Hale’s agent was already waiting.

The Honeymoon shows nothing is ever easy for SHIELD, which is bad for them but makes for very entertaining TV for us.