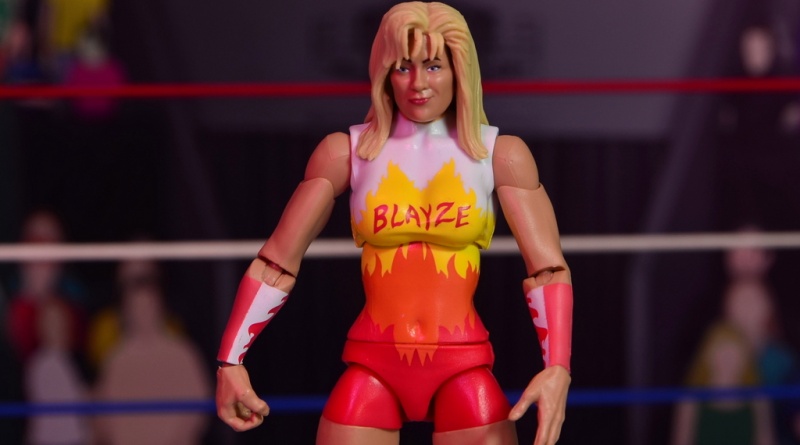 I’m backlogged with a ton of figures I’ve already written a portion of the review so naturally I grab the figure I haven’t started writing anything on yet. That’s just as well since this spares me from revising If I didn’t have very specific purposes for this figure — namely using the headsculpt for a custom Dangerous Alliance era Madusa — I would have no use at all for the Alundra Blayze figure at all.

The big problem is Mattel hasn’t really cared about making a lot of Flashback female figures. Since Alundra Blayze even pre-dates the Diva era there’s little chance her peers and rivals will ever get made. Naturally that makes this figure kind of a one-off that has no natural opponents unless you wanted to do dream matches. Then you’ll run into the endlessly frustrating ordeal of trying to pose a Mattel WWE female figure. I really hope this Ultimate line takes off because this Alundra Blayze figure would pretty much swear me off of ever getting another WWE female figure with this current articulation scheme. Is the figure all bad? Let’s find out.

Packaging:  The Flashback Series sports a great red, white and blue color scheme. It reminds me of WWF All-American Wrestling. Mattel does excellent bios for the Flashback line and the two paragraphs neatly capture two of Alundra/Madusa’s career highlights. 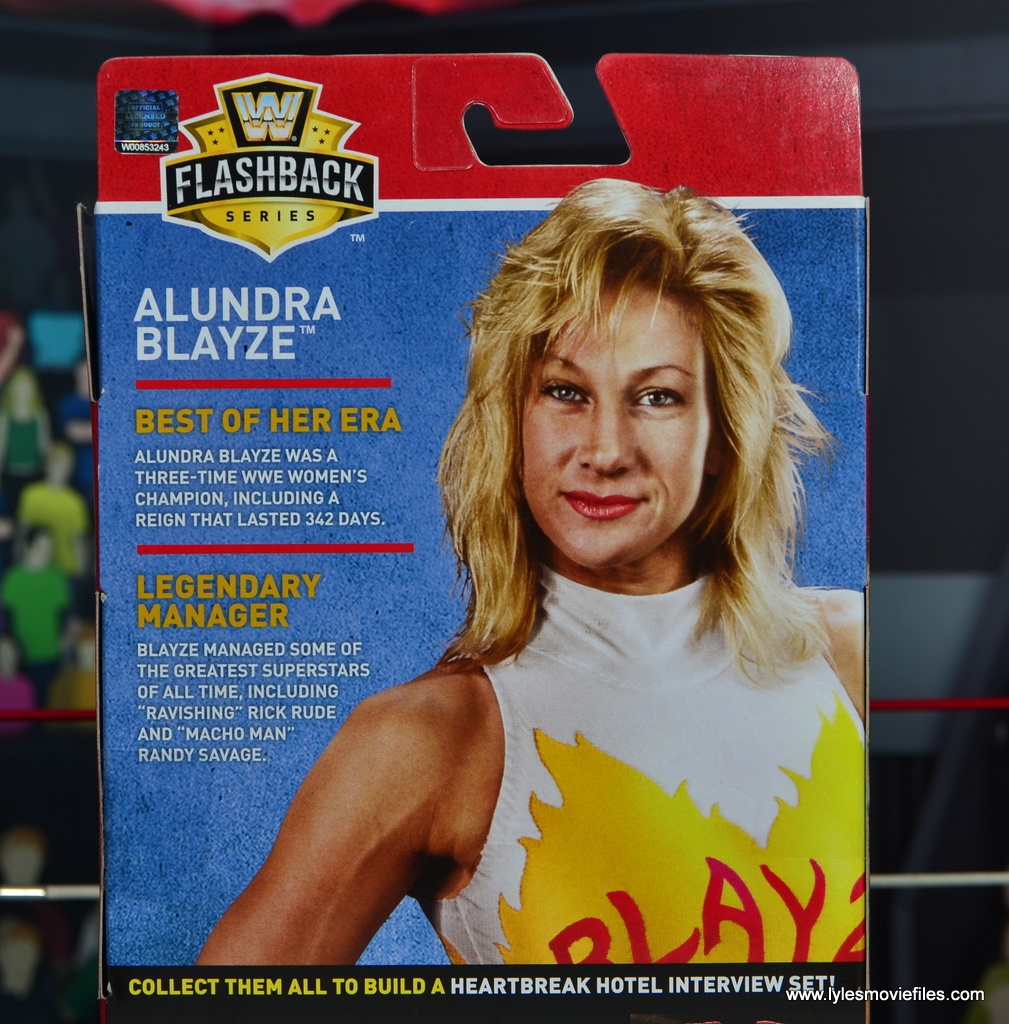 This time we won’t be able to use the card insert for an interview set as the secondary accessory piece is attached to it. 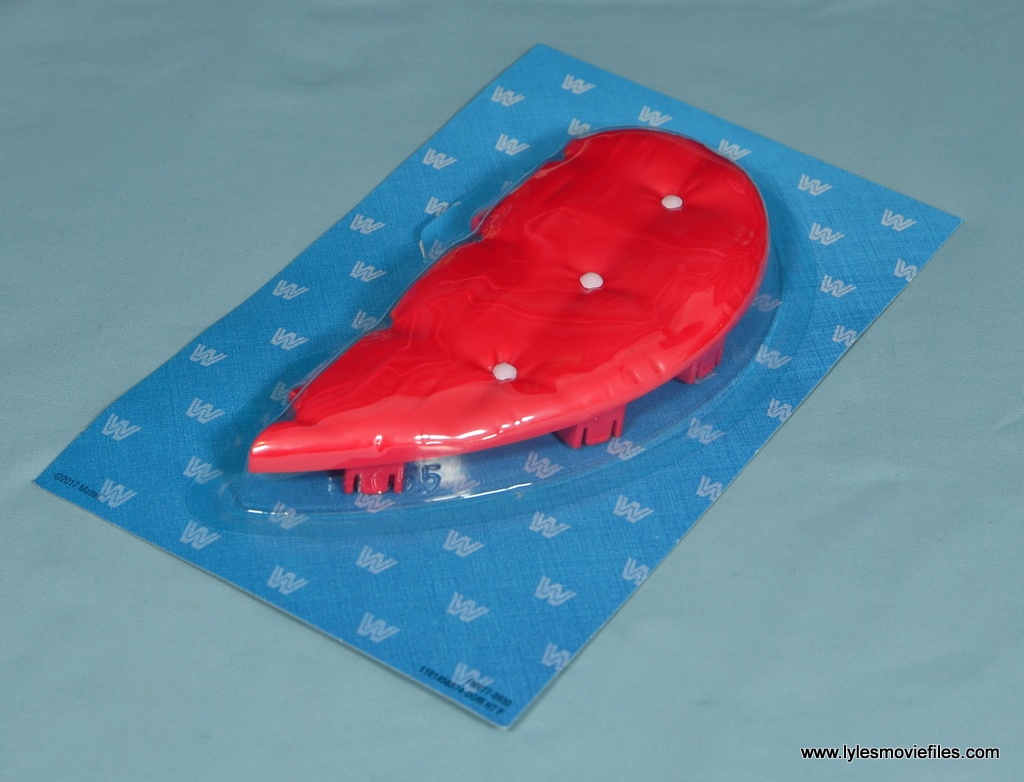 Likeness:  The likeness is pretty dead on for Alundra in the head sculpt. Madusa wore her hair in a shorter, tighter style if not outright pulled back at that point in her career. The figure has a longer hairstyle that looks more in common with Madusa’s WCW days. This is not a bad thing at all.

Alundra typically had outfits with fringes on her gloves and boots. There’s enough examples of a more basic look, but this particular attire definitely had the fringes and tassels. This wouldn’t be the case with an Ultimate Warrior figure and for a character unlikely to get 20 figures it’s a little disappointing that Mattel opted to cut corners in that regard especially since this will be the one and only Alundra Blayze figure we get.

Mattel tried to capture the high collar look of Alundra’s outfit, but totally lost the neck in doing so giving Alundra an unfortunate turtle-like appearance.  Also, I hate how after all this time Mattel still hasn’t designed a new lower torso so we don’t have the belly button mold in rotation for women who wear singlets. It looks so weird. 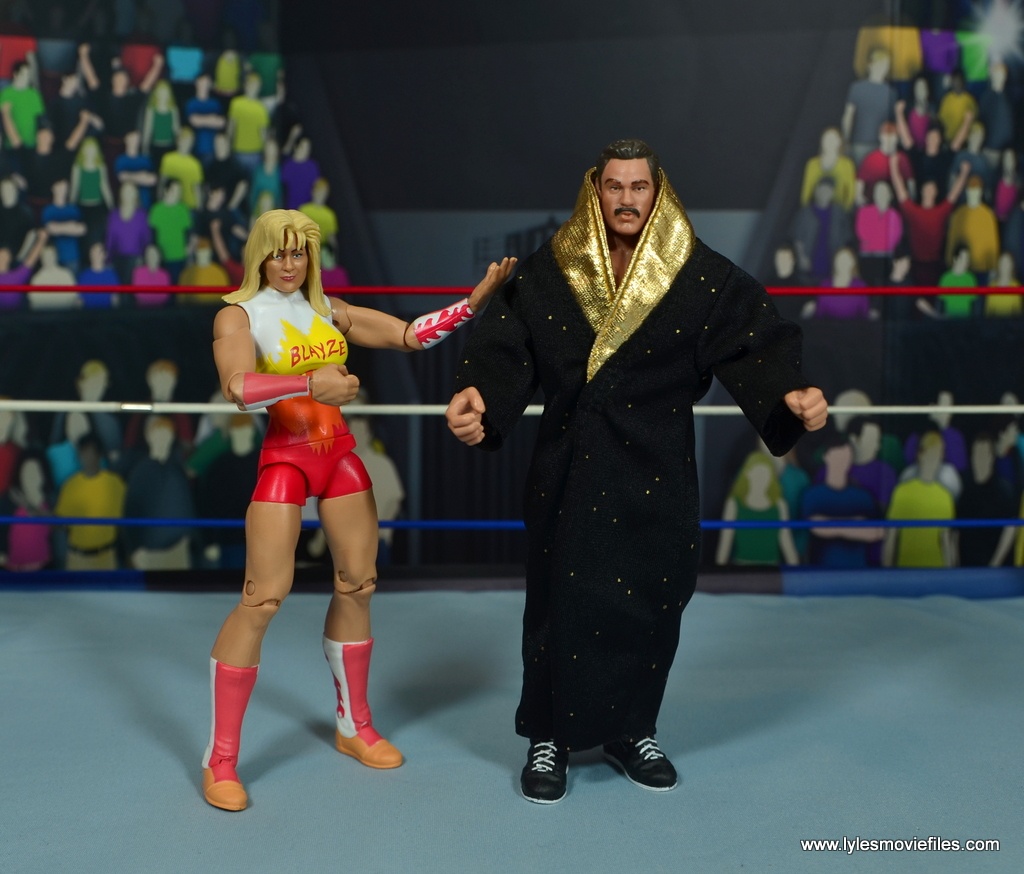 Scale:  Alundra was 5’10” compared to the Rude is 6’3”. From my completely unscientific measuring, that would put her right at Rude’s nose. The figure? Actually matches up at that exact spot. That’s pretty impressive. Score a big one for Mattel on that one.

Paint:  Mattel normally doesn’t have a lot of issues on the paint category. They might skimp on some details, but you typically won’t see flaws with the paintjob. As usual, I wish Mattel would do some two-tones for character’s hair to give more of a realistic look as Madusa had a real dirty blonde hairstyle.

All of the other elements like the various flames came out with no trouble at all. Mattel tries to simulate the fringes with the paint, but that’s asking a lot and it looks weird. 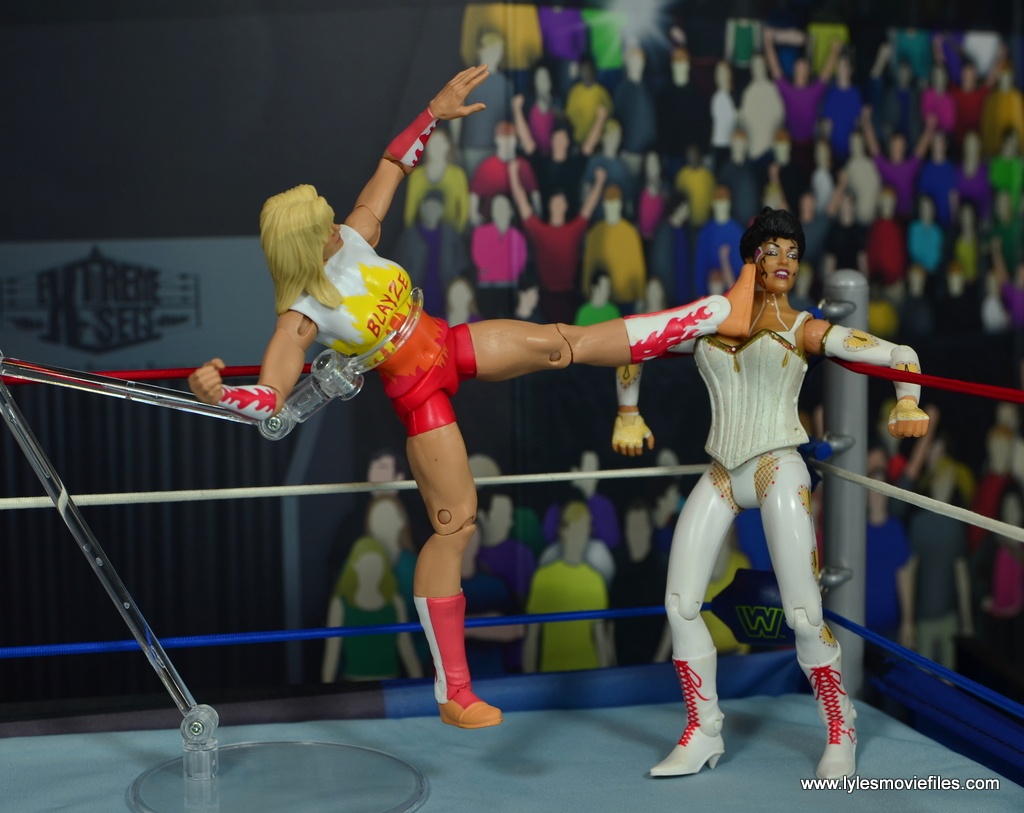 Articulation:  Here’s where it all goes downhill. The Mattel female figure body was basically a Basic before they cut articulation on that mold. The articulation we do get isn’t useful in pulling off many moves in a convincing manner. Alundra’s center of balance is so wonky she’s unable to stand to do her patented high kicks.

The lack of double elbows and especially double knee joints really hinders movement. Again, for a valet figure this is adequate, but even for the 90s style, this articulation is not helpful at all in pulling off any of Alundra’s moves. 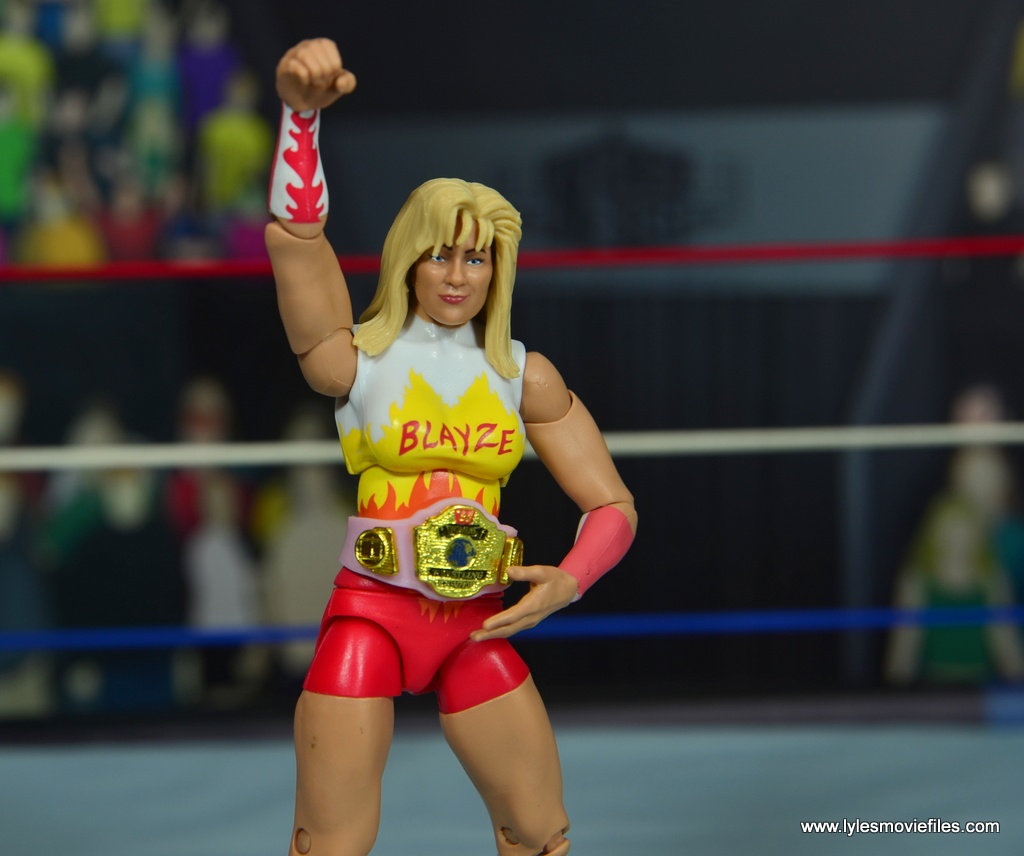 Accessories:  Alundra fares much better in this category. She comes with the WWF women’s title. This would be more useful if we could get a Bull Nakano or Bertha Faye figure, but Alundra had a stranglehold on the title and it makes sense for her to have it. It’s actually sized properly and won’t ride up on Alundra’s waist while posing her. 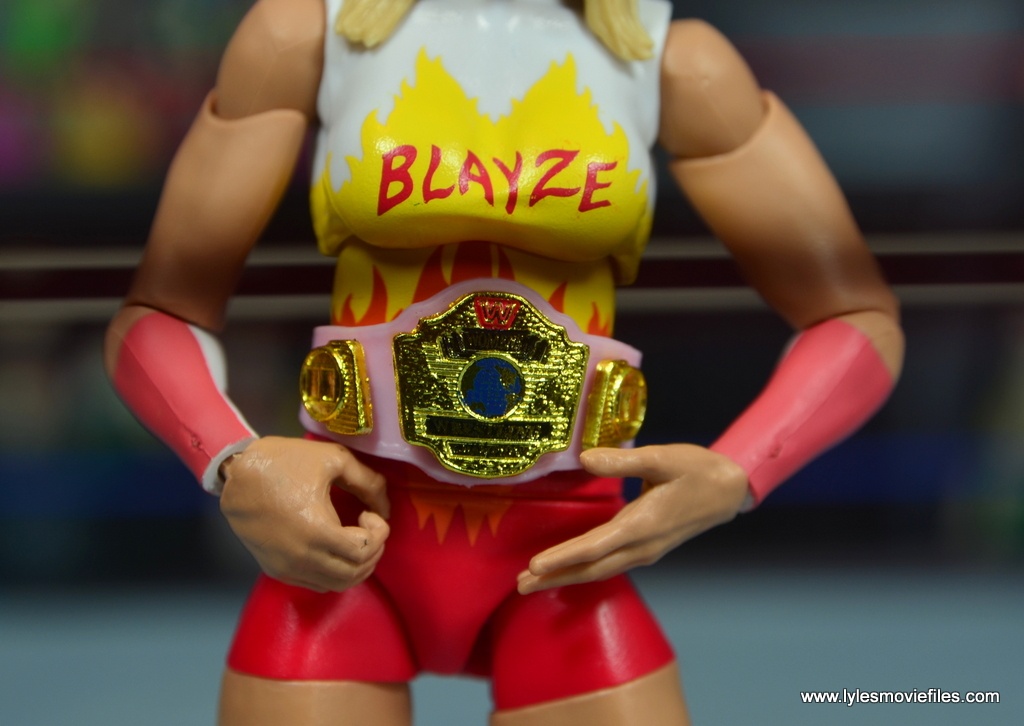 The big accessory though is the Build a Set Heartbreak Hotel. It’s half of the pillow HBK would sit on during interviews. It’s a pretty decent size, which of course means I’m going to be on the hook to complete it even though I really don’t want that Razor Ramon figure. 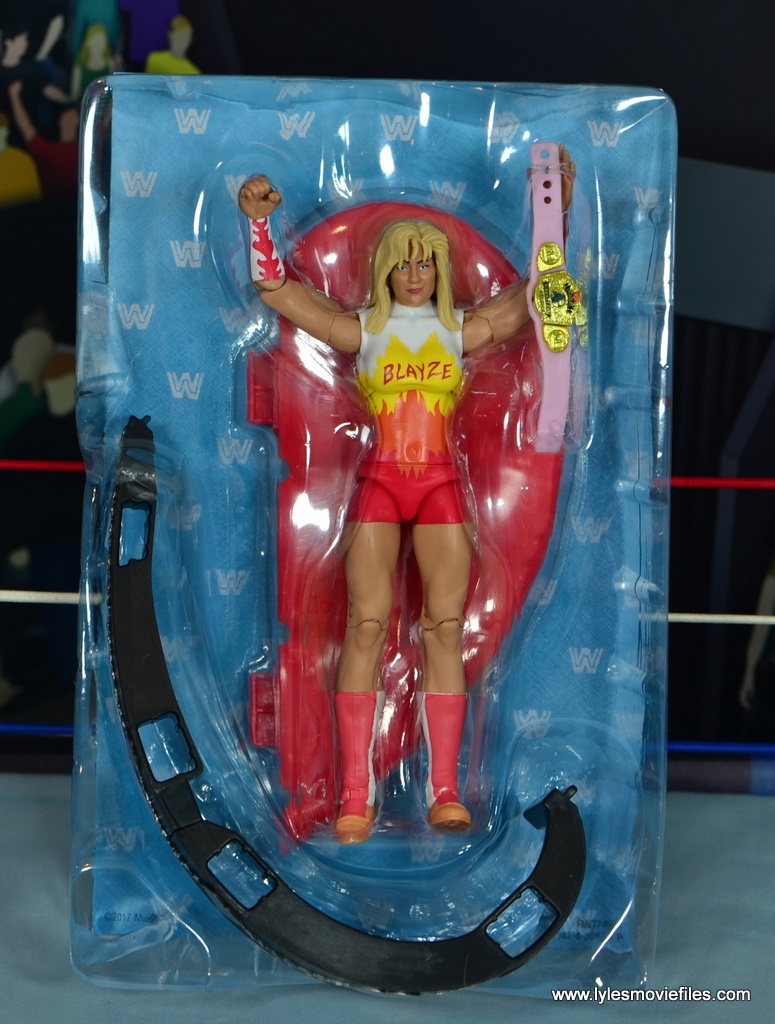 Worth it?  At $18, Alundra is a stretch since the best parts of the figure aren’t the figure itself.

The dreaded female articulation strikes again. This is a pretty terrible Alundra Blayze figure, but if you’re using this for Madusa purposes add a few more points. 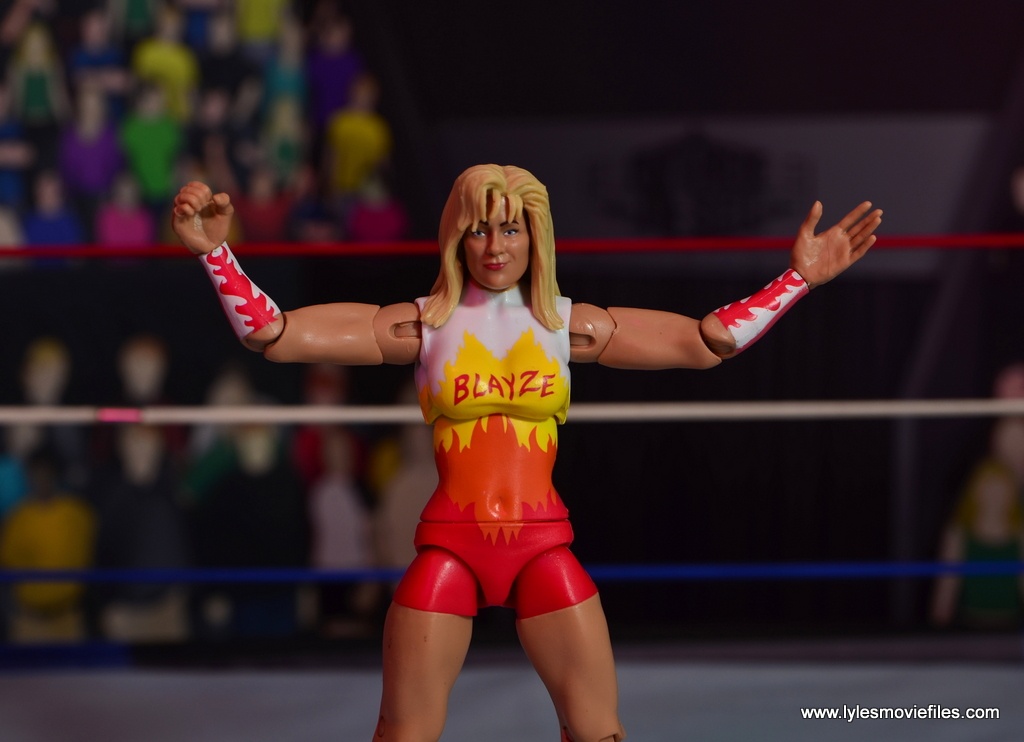 Where to get it?  The Flashback Series is exclusive to Wal-Mart. You can still get her on the website for $19 with free store pickup, but you can actually grab her from Amazon for even cheaper.