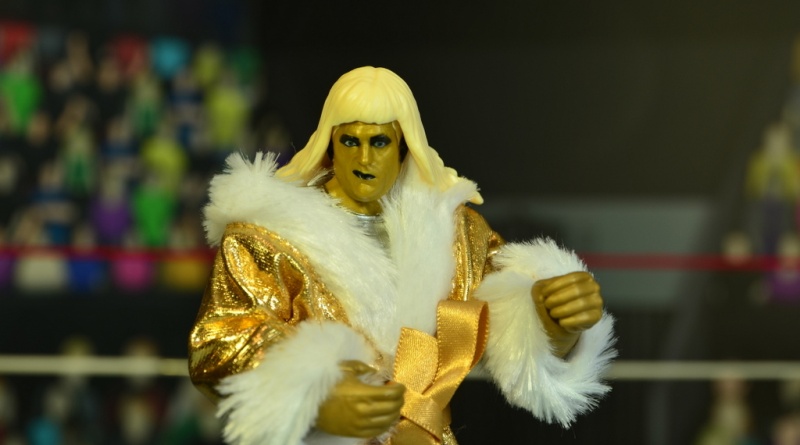 As a big fan of Dustin Rhodes in WCW, it took me a long time to come around on Goldust. One of the roughest and hard-nosed dudes in WCW was now wearing gold spandex and paint. But, as a movie fan, I loved all of his film references. Eventually, I came around and appreciated the wholly unique character Dustin made work better than expected.

As my New Generation collection steadily grew, Goldust’s absence was becoming even more pronounced. Finally, after a longer wait than I anticipated, a Flashback Goldust made the cut with Elite 47B. Let’s see if this figure is ready for its close-up.

Packaging:  Thanks to his color scheme, Goldust actually stands out nicely against the red and grey packaging. I still think Mattel needs to do a better job of finding promo art that best reflects the figure especially when the expression works better for the character.

The bio as usual is weak and doesn’t tell anything about the figure outside of title wins. Thankfully the new package scheme is improved on this front. 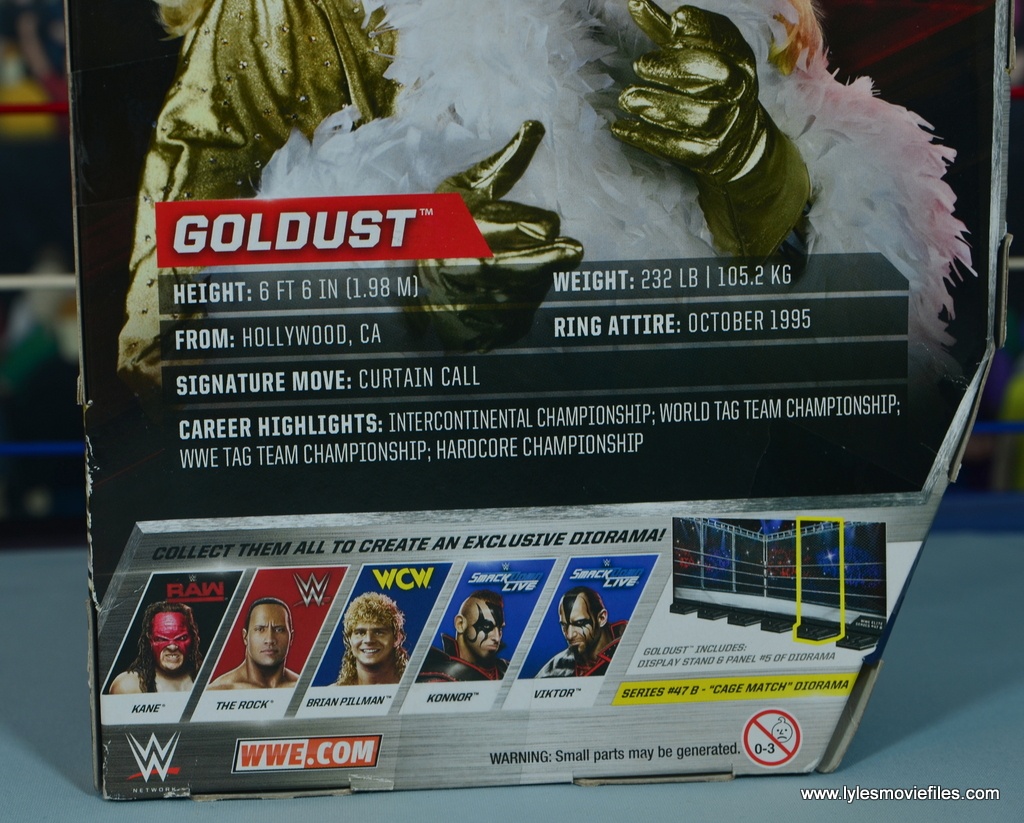 Likeness:  A quick Google search shows that this expression wasn’t all that uncommon for Goldust. I think my issue with it is it’s much more specific to promos than how Goldust looked while he wrestled. 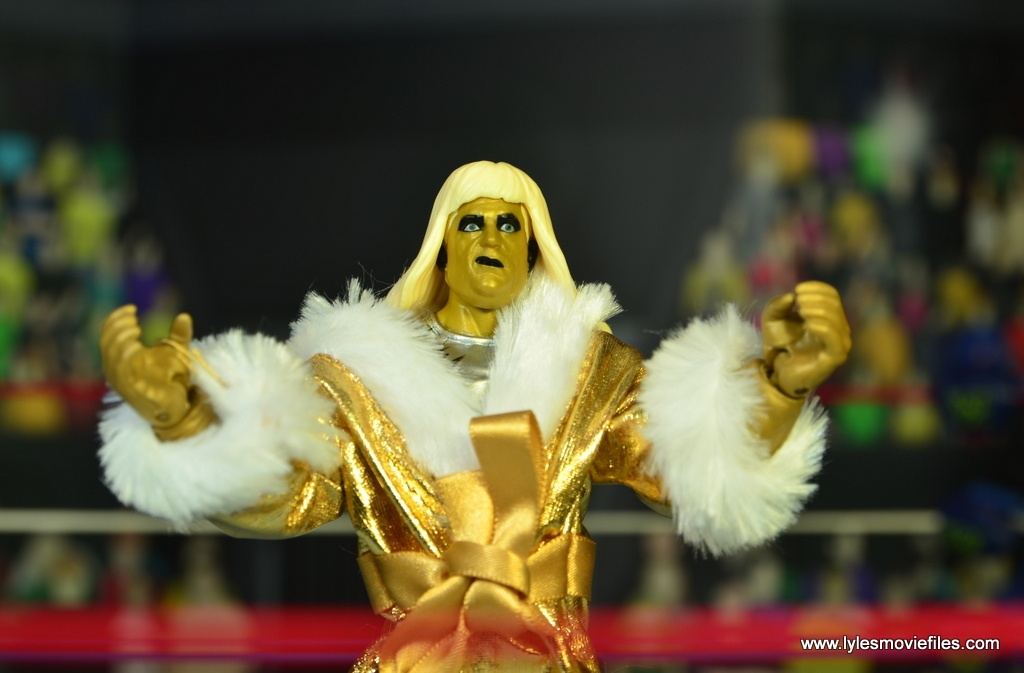 It’s one of those case where without alternate headsculpts choosing one that’s more versatile would have been a better play. 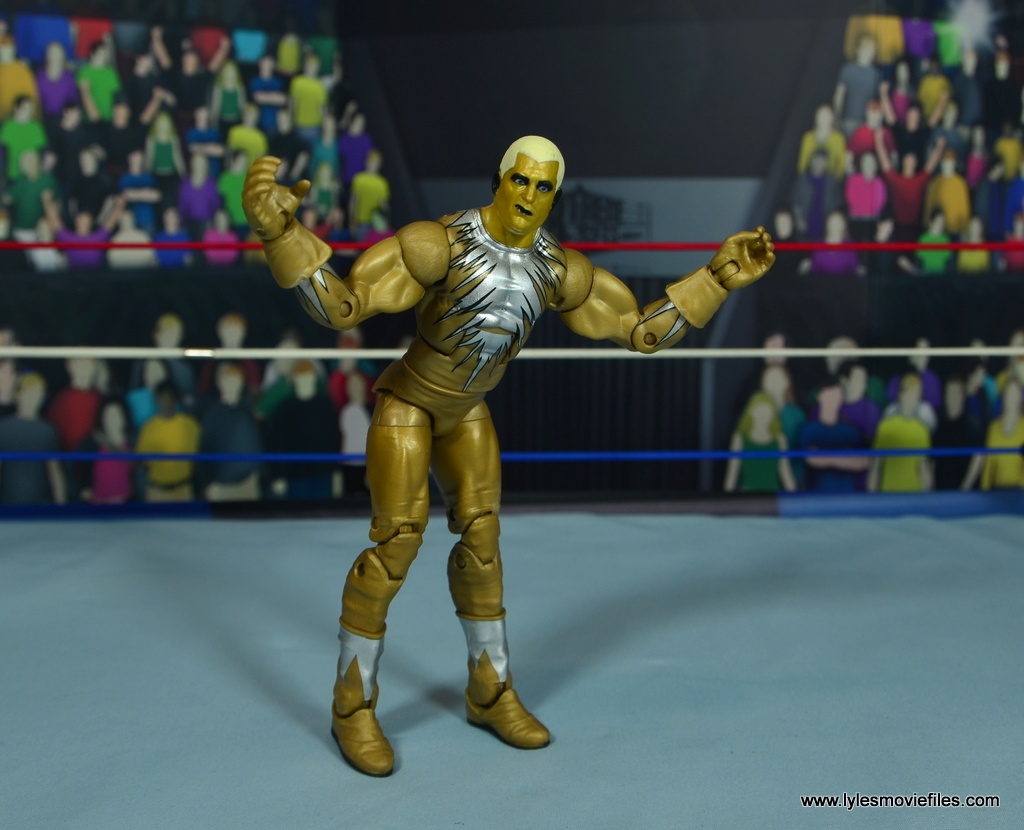 That gripe aside, this is a pretty solid take on Goldust since most of the hard work comes from the paint job. The slightly oversized gloves and padded cowboy boots came out nicely. 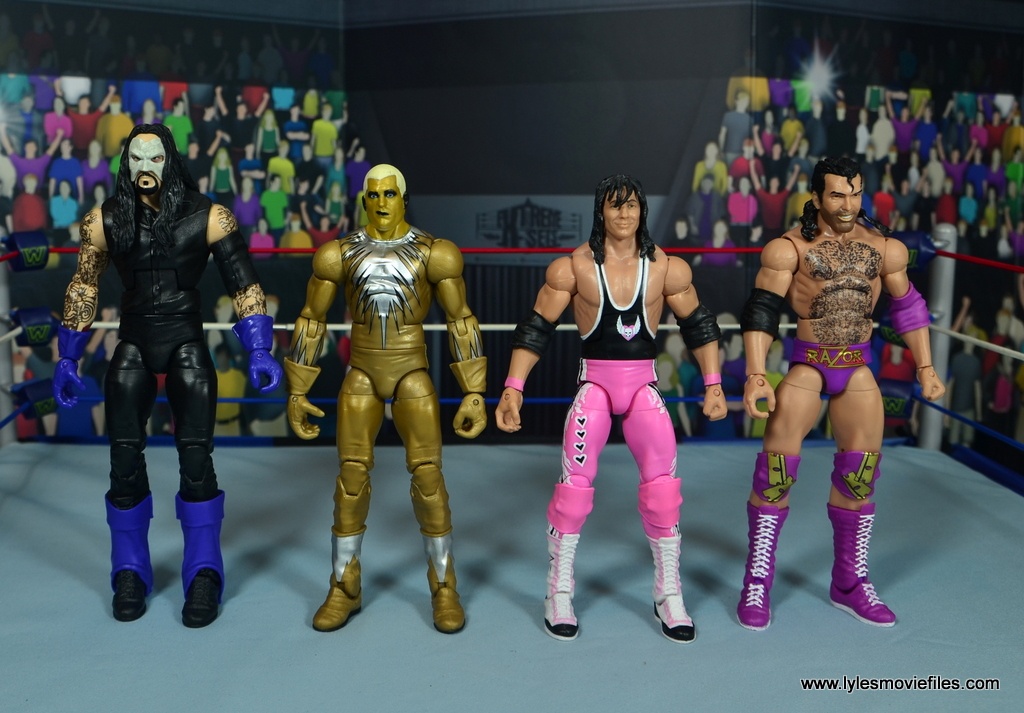 Scale:  Standing at 6’6, Goldust is taller than most of the guys from his era including the 6’0” Bret Hart and 6’2” Mankind while having to look up at the 6’7” Razor Ramon and 6’10”Undertaker. The scaling looks pretty much dead on from my perspective. This isn’t the be-all/end-all with figures, but I really appreciate when Mattel has scaling down so precisely. 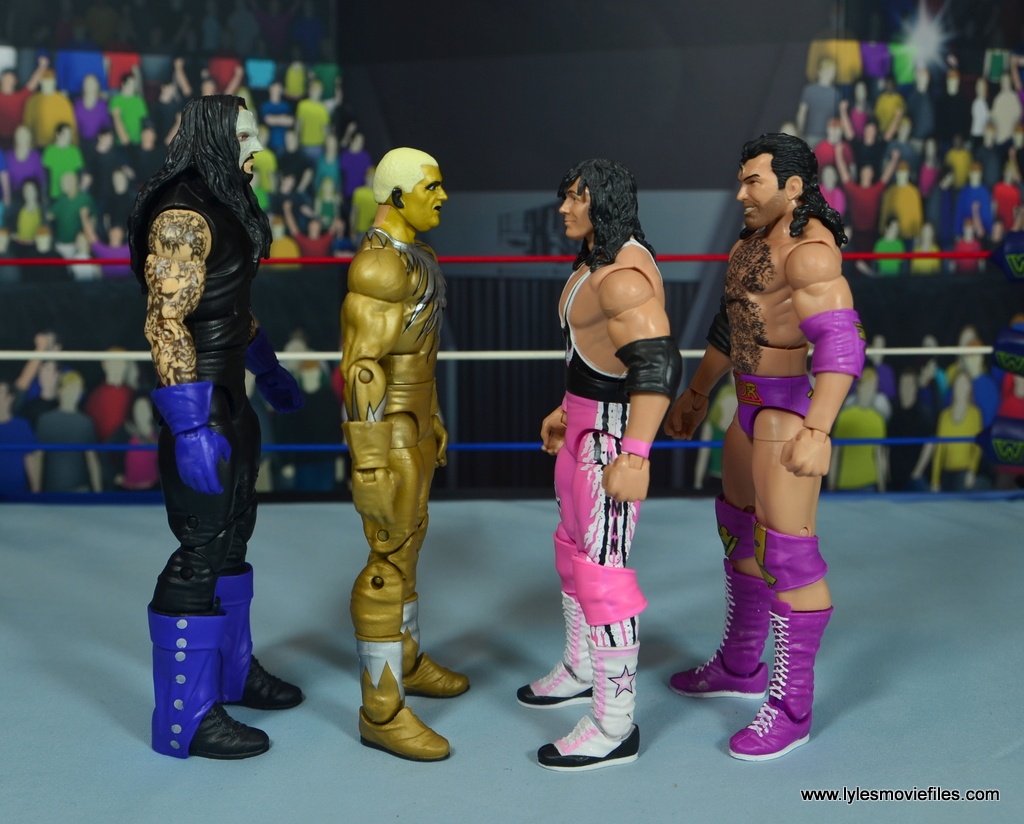 Paint:  Mattel didn’t have a lot of colors to work with here and chose one of Goldust’s simpler early attires. I really like the paint shade used for the gold as it closely resembles that spandex style attire.

The silver explosion with black accents on the chest and arms came out sharply. I’m not sure if this is accurate for this particular attire, but I wish Mattel had done the black accent on the boots as well.

Articulation:  There’s no problems on the articulation front as I can hit every possible Goldust pose except for the fondling his chest taunt. I really wish I could do that one specific pose as it’s his most iconic gesture. 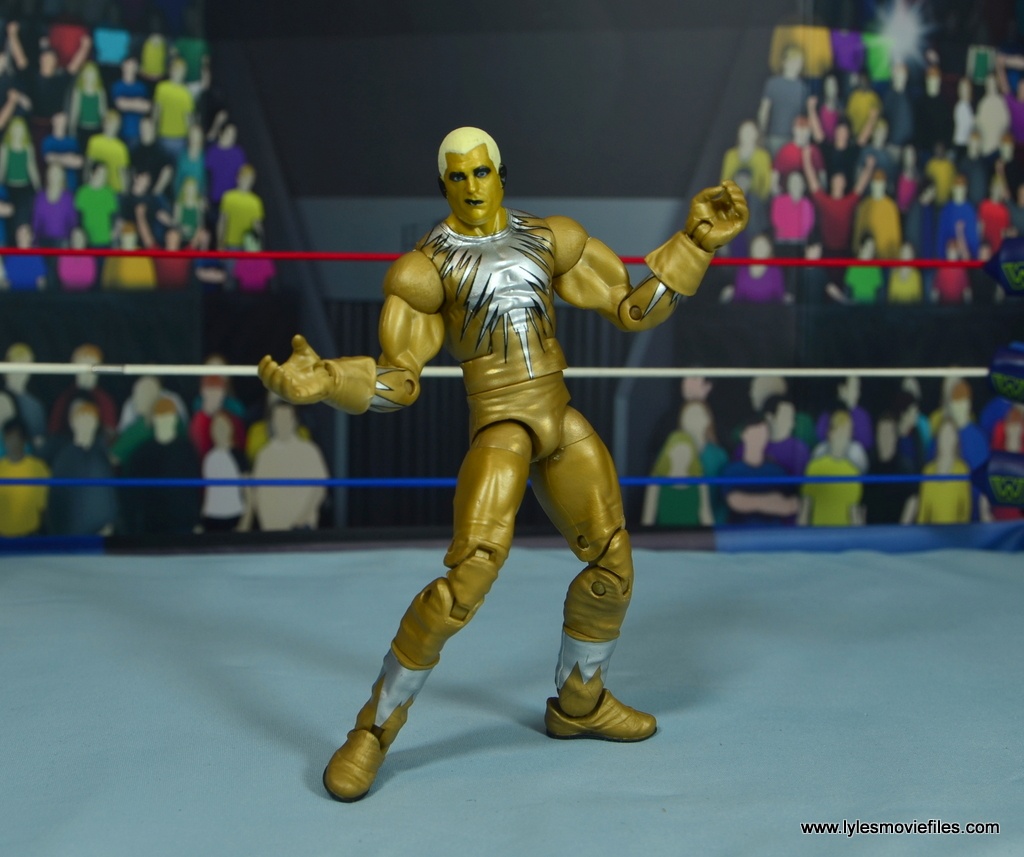 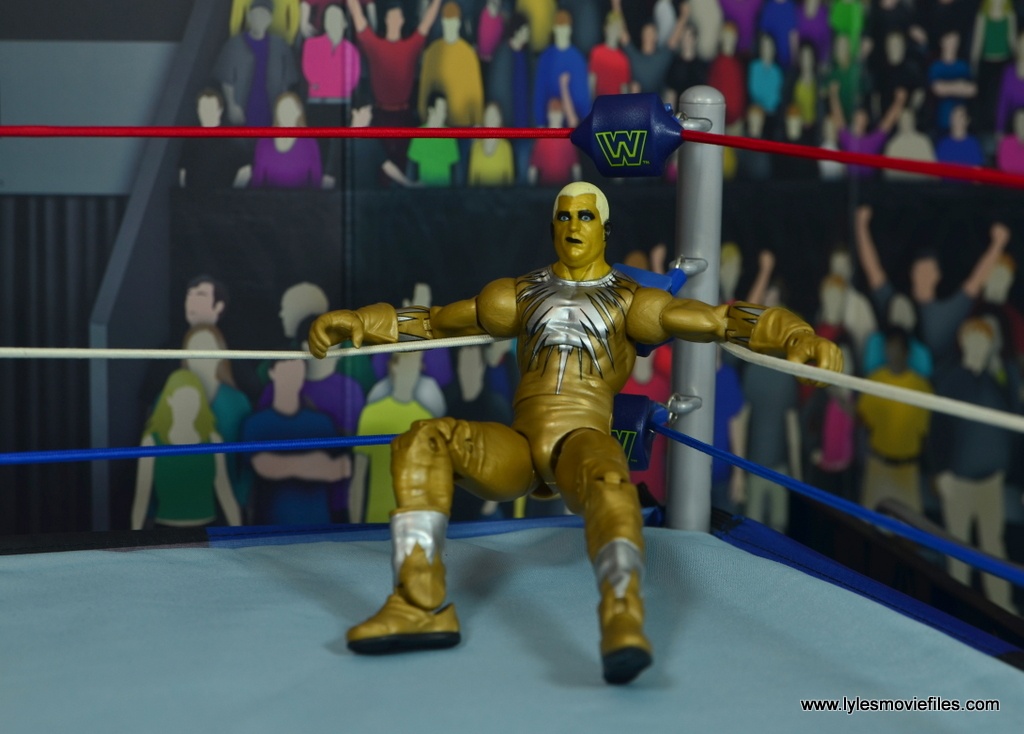 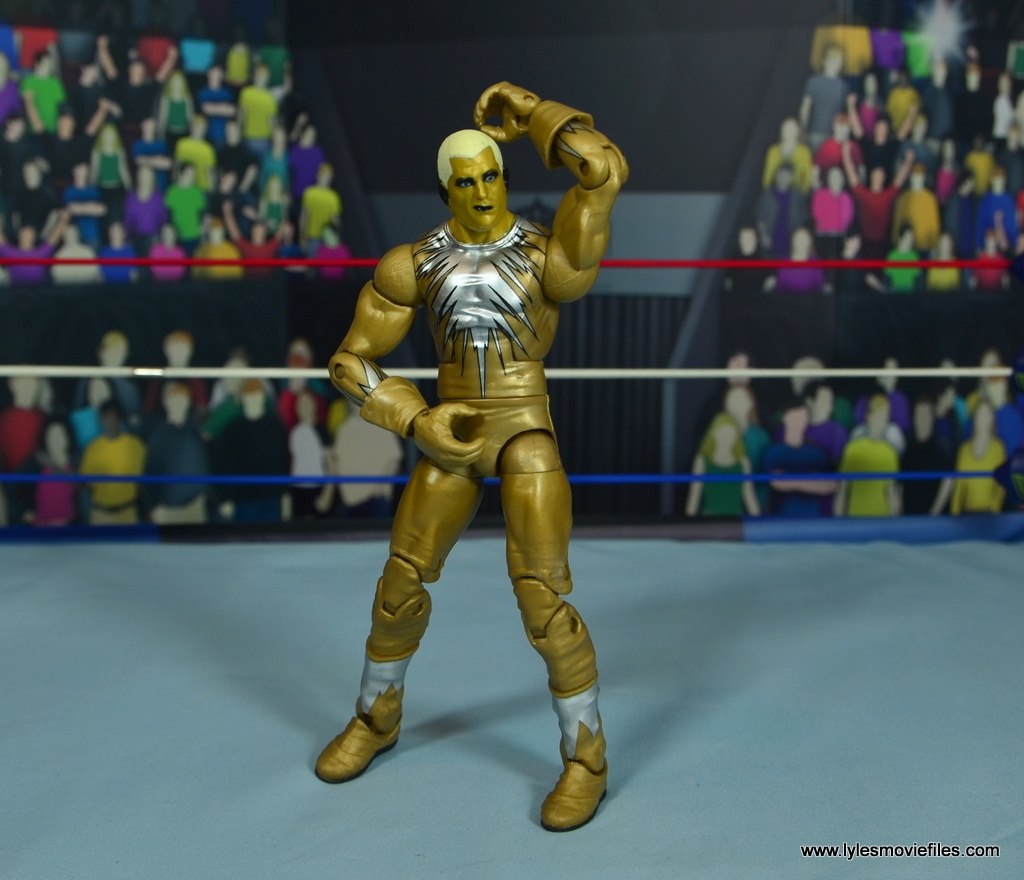 Accessories:  To complete the look, Mattel included a cloth robe with appropriately sparkly, shiny material and fluffy collar and sleeves. 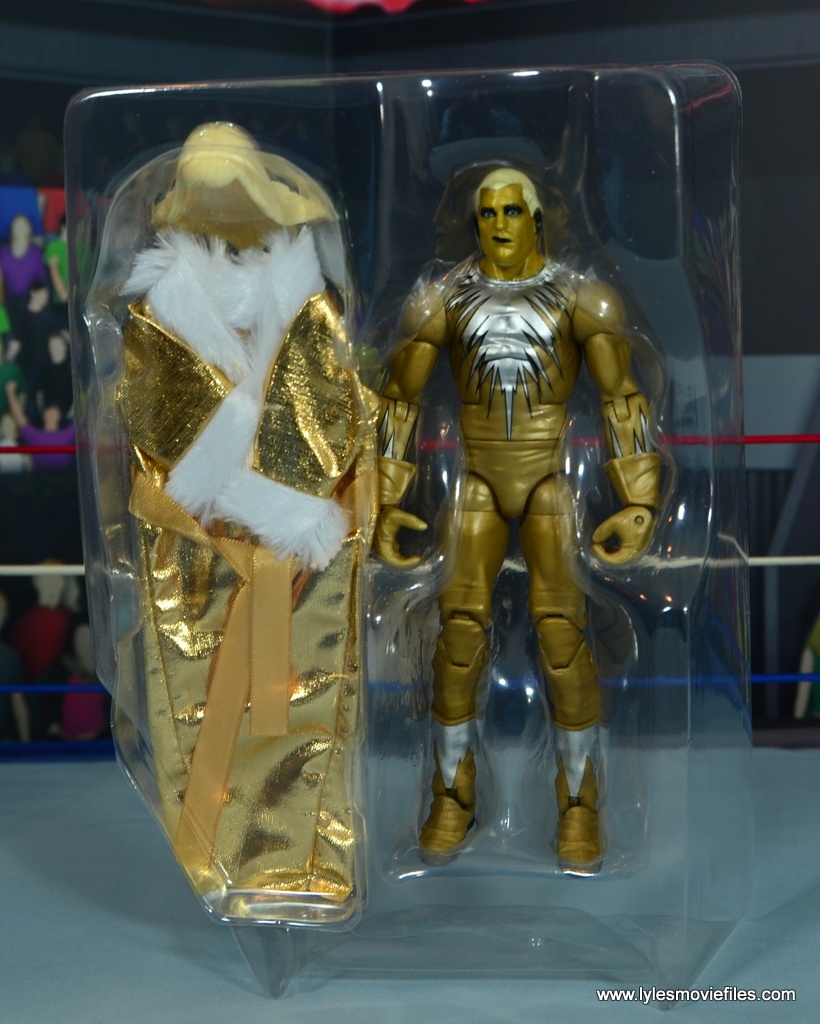 This is so much better than the original modern Goldust figure that was essentially in a casket with the plastic robe. 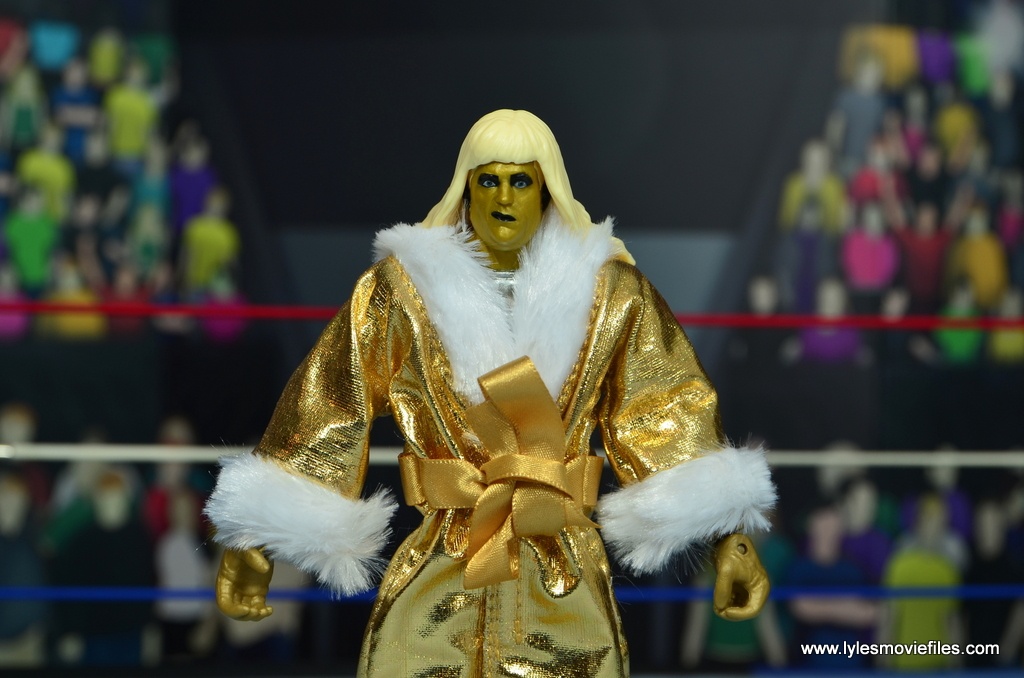 I think the wig is the same as before and it is faithfully captured with the slightly off center bangs.

He also comes with the worthless stand and steel cage diorama, which is even less useful than some of the others. 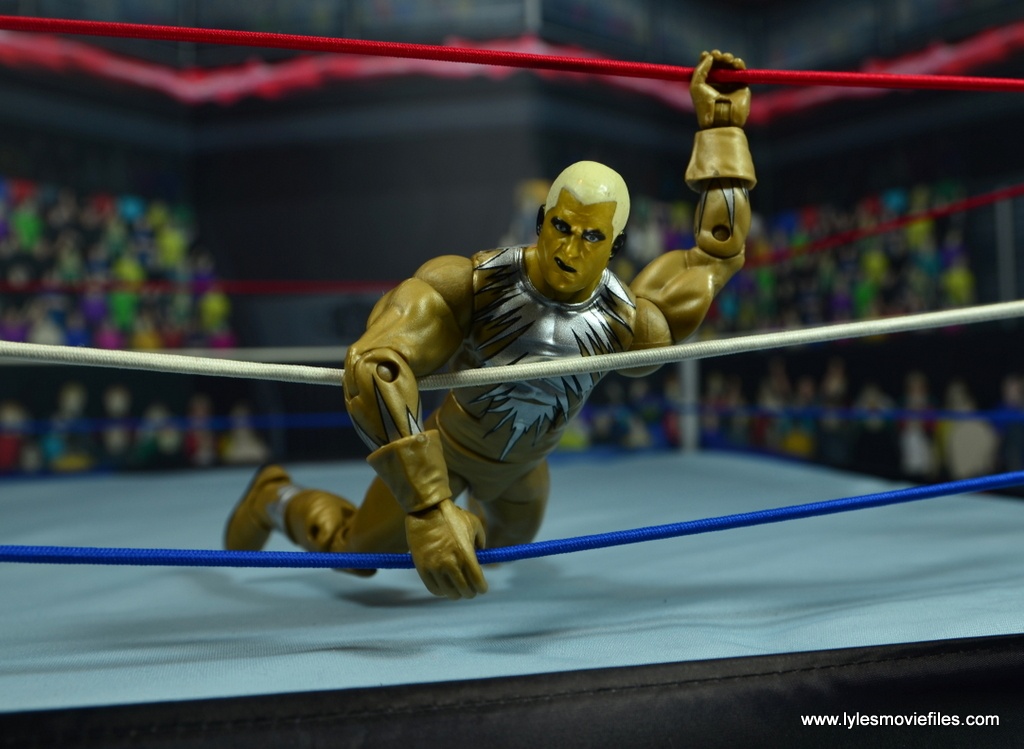 Worth it?  This guy is slightly above the normal $20 retail price. He’s not super cheap like some Flashbacks, but he’s worth getting for a few dollars more.

With a faithful rendition of one of the WWF’s most controversial stars, this Goldust is ready to take center stage in my collection.

Where to get it?  Amazon still has Goldust in stock. Trying other sources might prove way too tricky.