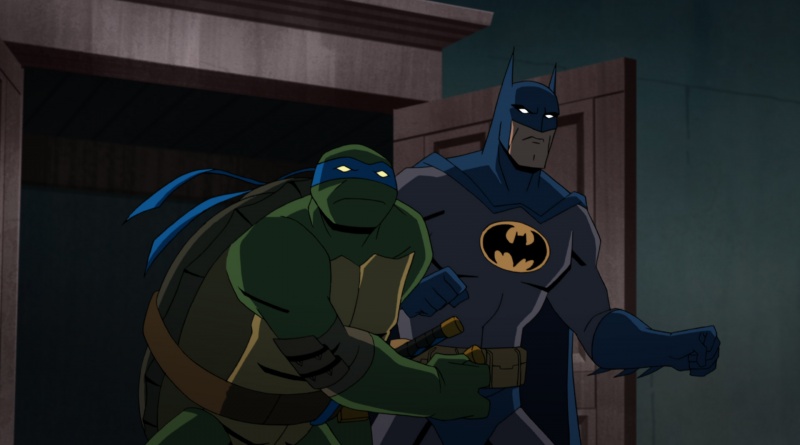 James Tynion IV and Freddie E. Williams III have created some of the best crossovers in decades exploring the child-fueled creativity of mashing various universes into a cohesive narrative. One of their first and best collaborations was Batman and the Teenage Mutant Ninja Turtles, a pairing so popular it’s resulted in two sequels. The first installment is the basis for the Warner Bros. Animated film Batman vs. Teenage Mutant Ninja Turtles. While not as cowabunga-inducing as the source material there’s plenty to like here for Batman and TMNT fans alike. 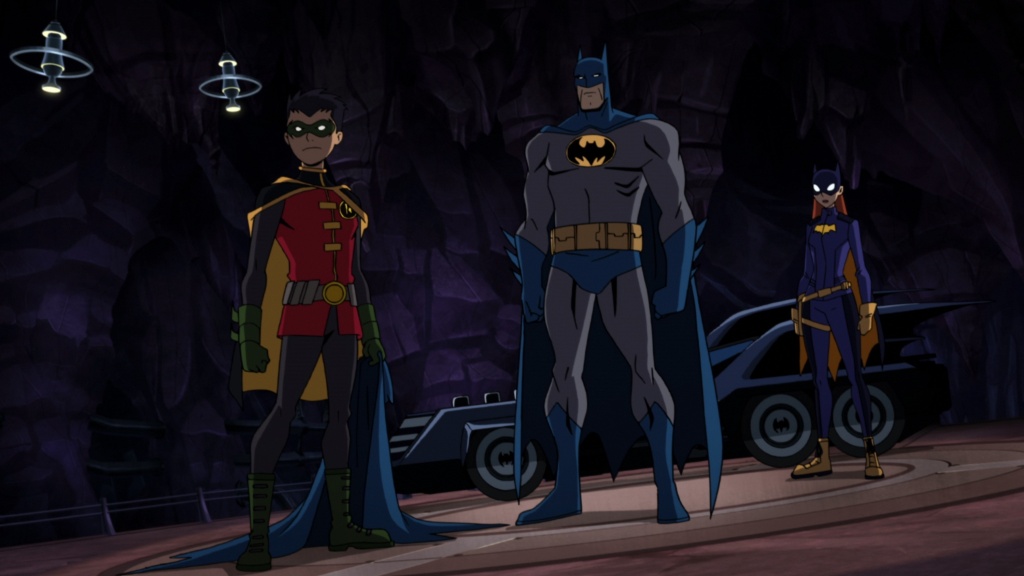 Mysterious figures are stealing valuable equipment in Gotham City. When the thieves set their sights on a device at Wayne Enterprises, Batman (Troy Baker) responds and tangles with Shredder (Andrew Kishino) and The Foot Clan. But the surprises aren’t over for Batman as he encounters four very unique ninja masters.

Screenwriter Marly Halpern-Graser has the Turtles dynamic down perfectly. Batman is always easier as he can be the straight man in any pairing, but the Turtles really make the film so much fun. Michelangelo (Kyle Mooney) completely fanboys out throughout the Gotham adventure. 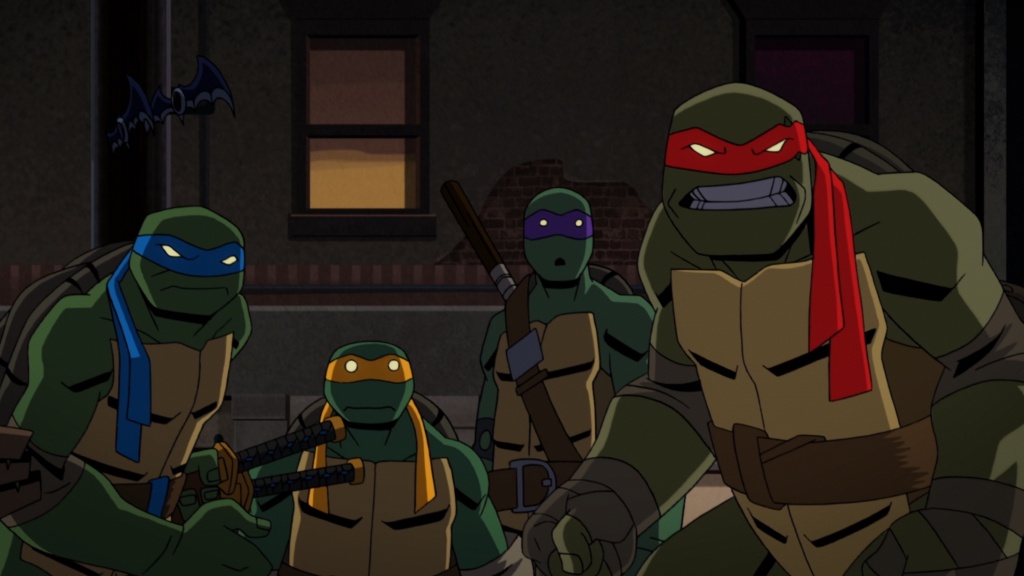 Raphael (Darren Criss, Supergirl) takes things far more seriously as Donatello (Baron Vaughn, Cloverfield) has a knack for showing off his intellect while Leonardo (Eric Bauza) tries to keep his brothers in line. Ironically in the Rise of the Teenage Mutant Ninja Turtles series, Bauza voices the Turtles’ mentor Splinter.

Halpern-Graser sticks pretty faithfully to Tynion’s script, which played like a greatest hits of the two universes’ most popular characters. Some fan favorites like Nightwing, April O’Neil, Splinter, Casey Jones and Bebop and Rocksteady don’t make the cut, but there’s enough fun with sidekicks like Robin (Ben Giroux) and Batgirl (Rachel Bloom, Crazy Ex-Girlfriend). And that leaves the door open for the sequel where Batman and company make the road trip to hang with the Turtles on their stomping ground.

I wasn’t a huge fan of the Turtles’ design in the film. Over the years, designers have take unnecessary measures to make the Turtles stand out despite the various color headbands and weapons being enough for decades. It’s not viewers would confuse Raphael and Leonardo if Raphael wasn’t drawn bigger and more like a bruiser.

Hopefully going forward Bloom voices Batgirl on any future projects as she has the perfect tone and inflection for one of DC’s more popular heroines. Baker of course is a steadying presence here and makes some history as the first voice actor to play both Batman and The Joker. He’s alternated between the characters in various DC projects so this was a neat way to acknowledge his longtime work in this universe. 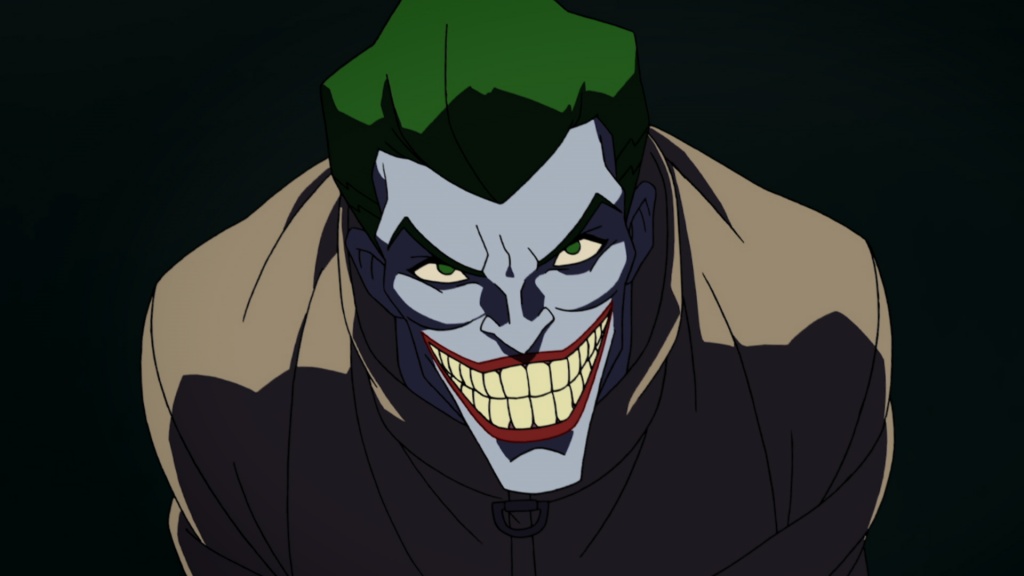 Director Jake Castorena has worked his way up the Warner Bros. Animated ranks doing storyboards since 2011 on projects including Batman: The Brave and the Bold, Green Lantern, Justice League: Gods and Monsters and Batman vs. Robin before his breakout work co-directing The Death of Superman. Castorena probably should be helming films from this point forward as he’s got a great sense of staging the fighting sequences. Batman vs. Shredder and Batman vs. the Turtles are the standouts, but there’s several well executed battles throughout.

There’s an odd tonal clash in the film as characters take ninja stars to the face, others get decapitated and then 10 minutes later Michelangelo is using his shell to weigh Robin down. Given the nature of this particular crossover, the more violent, gory scenes are a bizarre fit. Sure, the original Turtles comic didn’t shy away from violence, but with this Nickelodeon style presentation of the TMNT, it never quite works. 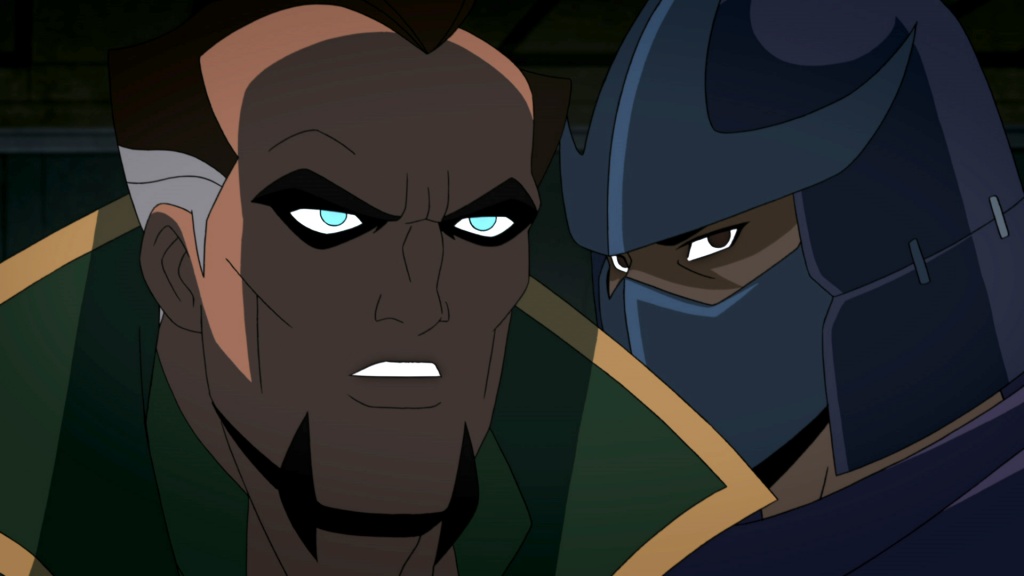 It comes off like letting Quentin Tarantino randomly direct a few scenes of a Pixar film. And it’s even more frustrating since it (should) restricts younger viewers from enjoying something that’s right in their wheelhouse. That was a bad call and a little editing would have fixed one of the film’s biggest problems.

Of course the kicker here is the gore is hardly necessary. Batman is a character that can have violence, but doesn’t need it to tell a good story especially when his co-stars are ninja turtles with a predilection for pizza. It’s supposed to be a little goofy and unconventional. 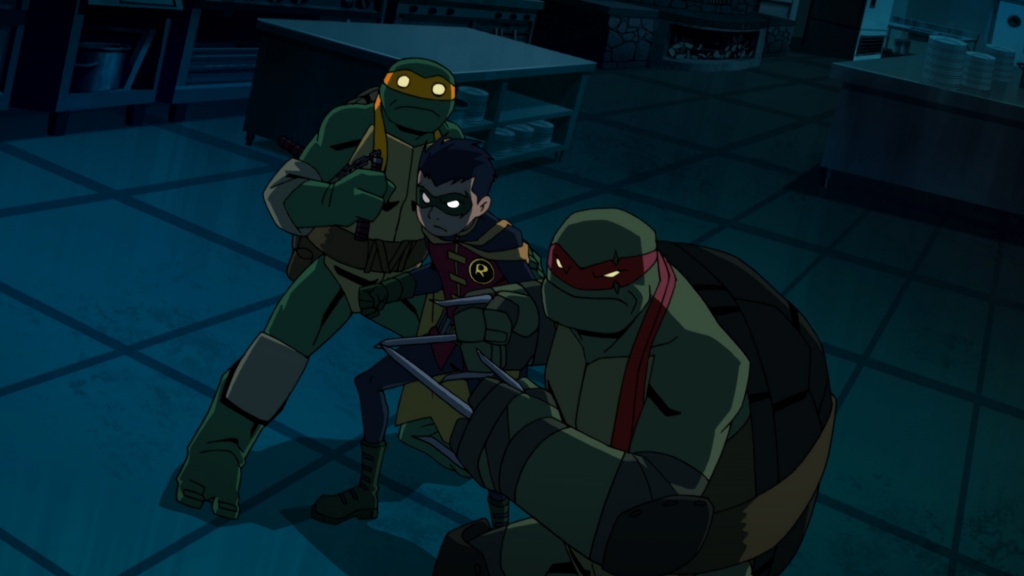 Fortunately the final act embraces all of the wonderfully absurd antics of the source material right down to a clash with mutated versions of The Foot Clan and Batman’s Rogues. Between the action, humor and the willingness to truly embrace this unique crossover, Batman vs. Teenage Mutant Ninja Turtles is a lot of fun in spite of the oddly timed and questionable gore.