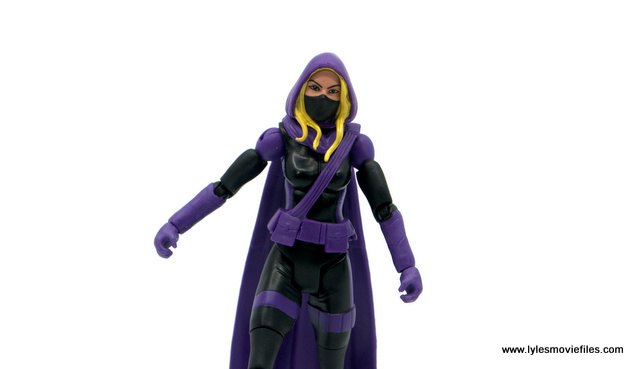 Spoiler has been one of my favorite Gotham sidekicks since her introduction. Her back story was pretty cool and I liked how she cared more about Tim Drake’s acceptance over Batman. I was thrilled Spoiler was a pivotal character in James Tynion IV’s phenomenal Detective Comics run. Seriously, it was one of the best runs since DC Rebirth kicked off. Mattel inserted Spoiler as a special add-on to the DC Multiverse Super Lex wave as a Wal-Mart exclusive. Let’s see if I’ll be spoiled with this release.

Packaging:  I still like this blue package scheme for DC Multiverse as it stands apart from other retail lines. The angled bottom still seems like a style choice over anything necessary, but it does look cool. Along the side and back is a portrait of Eddy Barrows’ artwork.

The bio is short, but sums up Spoiler’s specific purpose during the Detective Comics run. It’s a little odd that the packaging touts the upcoming lineup to go along with the Collect and Connect Super Lex figure. Also, Simon Baz is actually not part of this wave despite his inclusion on the package. 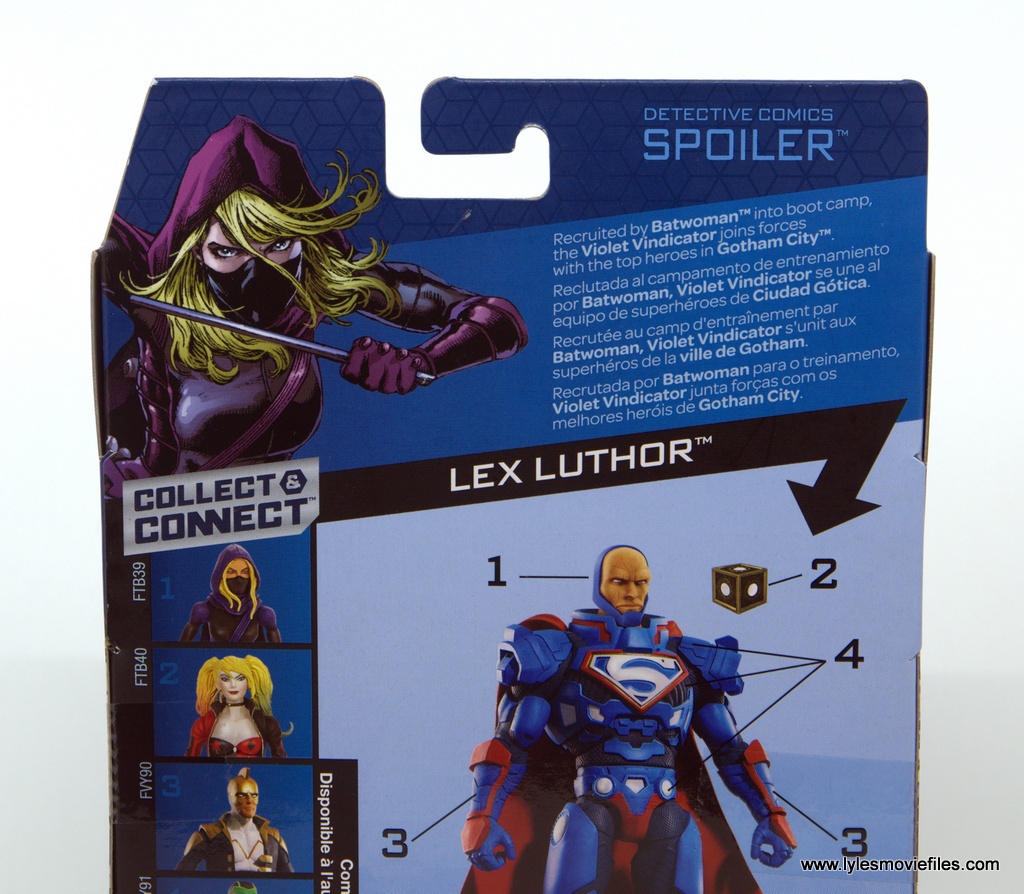 While the neutral pose is nice, the presentation of the figure is somewhat uninspired compared to the more dynamic packaging of Marvel Legends figures.

Likeness:  This is Spoiler’s updated attire with the ninja style influence. It’s a nice update to her old costume, which had more of a cute pre-teen hero look that fit with the Robin series. This costume fits more along the lines of someone who’d be teaming up with Batman on the regular. 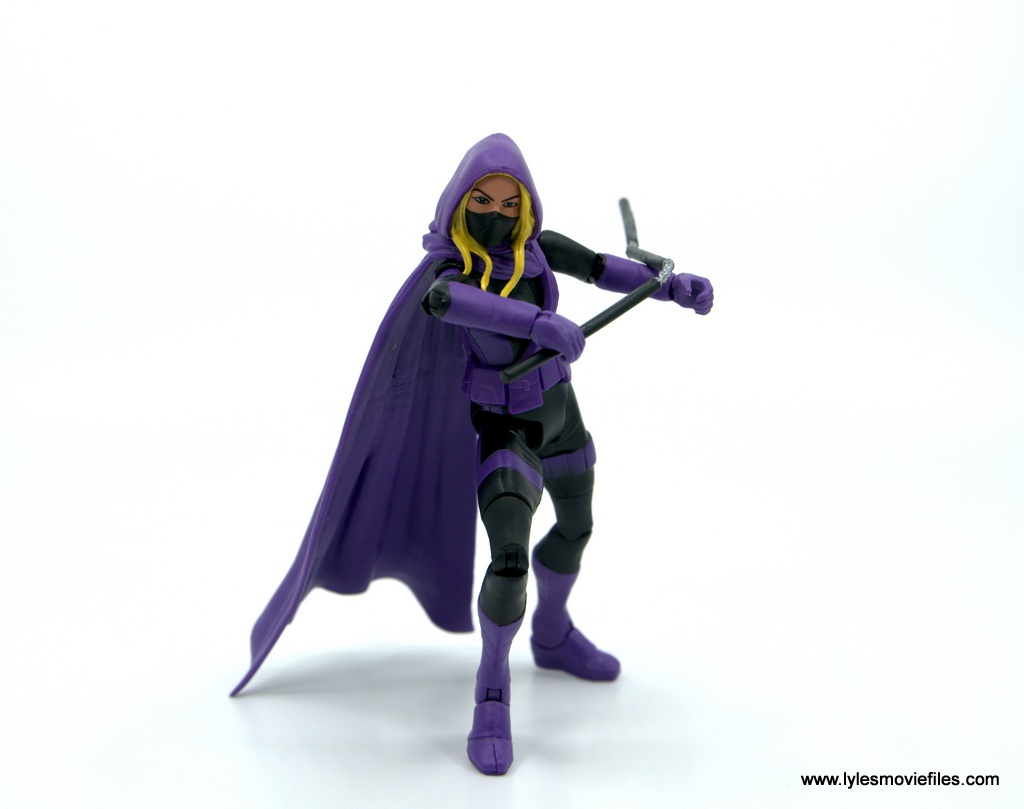 The sculpting is pretty solid throughout. Some of the outfit details like paneling along the sides of the thighs and knee pads are missing, but otherwise came out fine. The hair strands are sculpted in a realistic manner and the eyes look nice and focused. My only gripe is I wish the hair flowed over Stephanie’s forehead. She’s rarely shown with her hair pulled back and it’s the one area that makes the figure look like a toy.

I like the flow of the cape as it clings tight around her, which is smart for a Gotham vigilante.

Scale:  Spoiler is typically portrayed as younger like possibly her late teens and this figure reflects that as she’s shorter than Batwoman. This is accurate to her appearances in the comics as well. 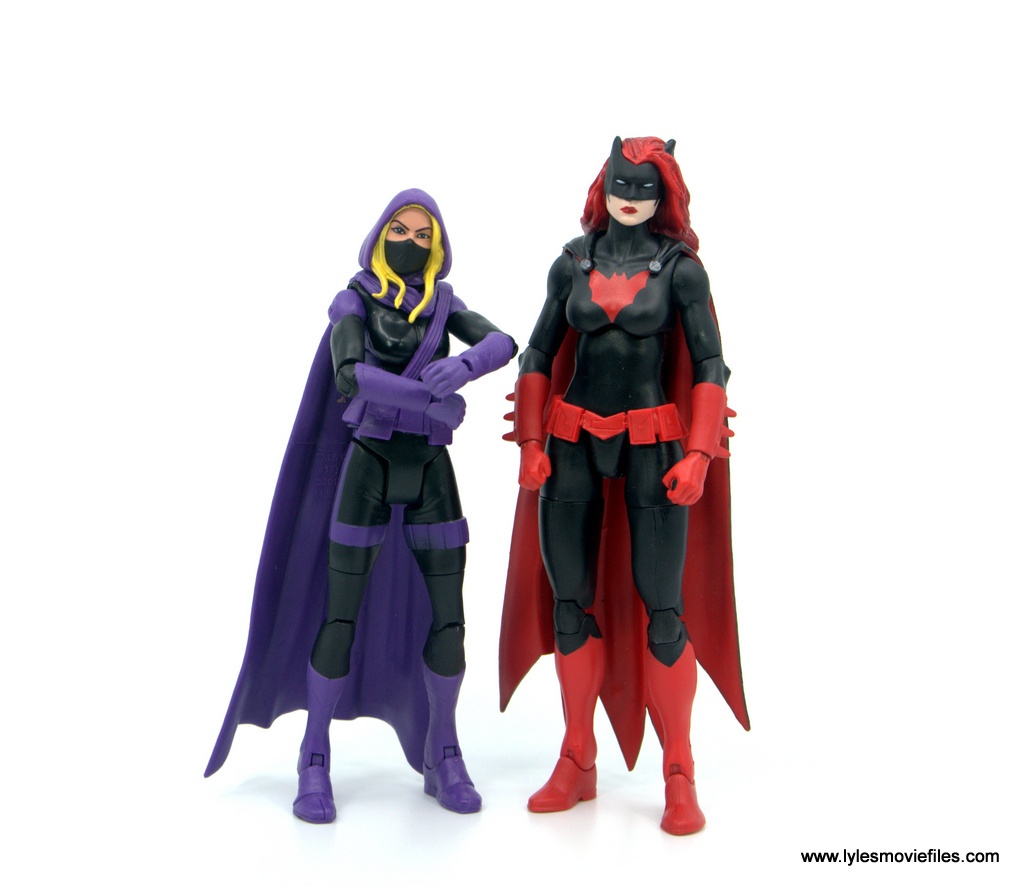 You’re gonna have to wait for the upcoming Red Robin figure to find a Tim Drake to match her though as she towers over the way too short one Mattel previously released. 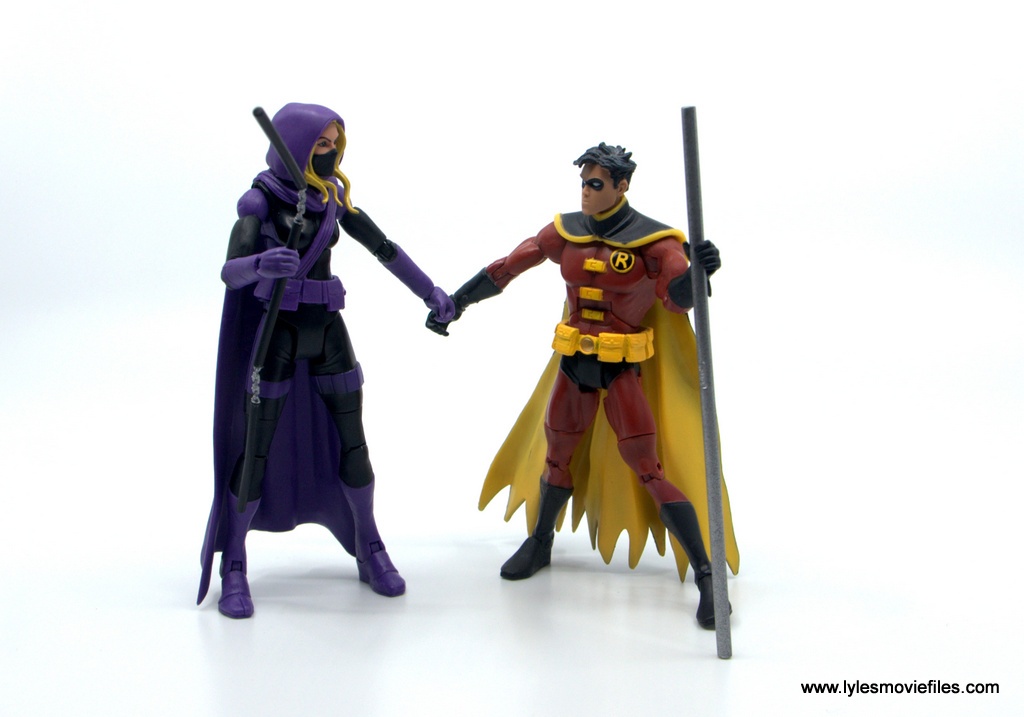 Paint:  The figure is largely cast in black and purple without any extra detailing like a wash. I don’t know if that’s essential in this case, but it would have helped bring out some of the sculpted work in the pouches and paneling.

More importantly, there weren’t any big issues with the paintjob. I have seen some Spoilers where the blonde slopped over into the mask or forehead. You should be able to be choosy so make sure to pay attention around the head area in particular. 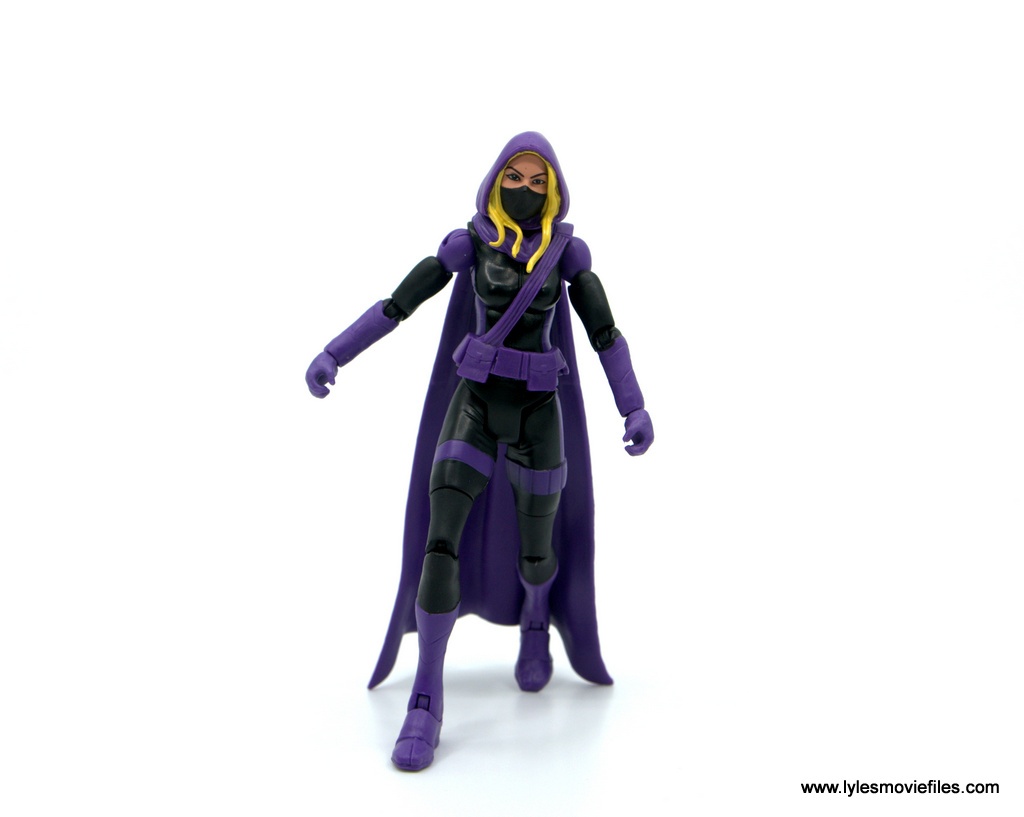 Articulation:  If you’ve gotten the DC Multiverse Jessica Cruz or Batwoman, you know the DCM articulation is vastly improved. Unfortunately, The Spoiler uses a hybrid body that still has some of the outdated DC Classics articulation. 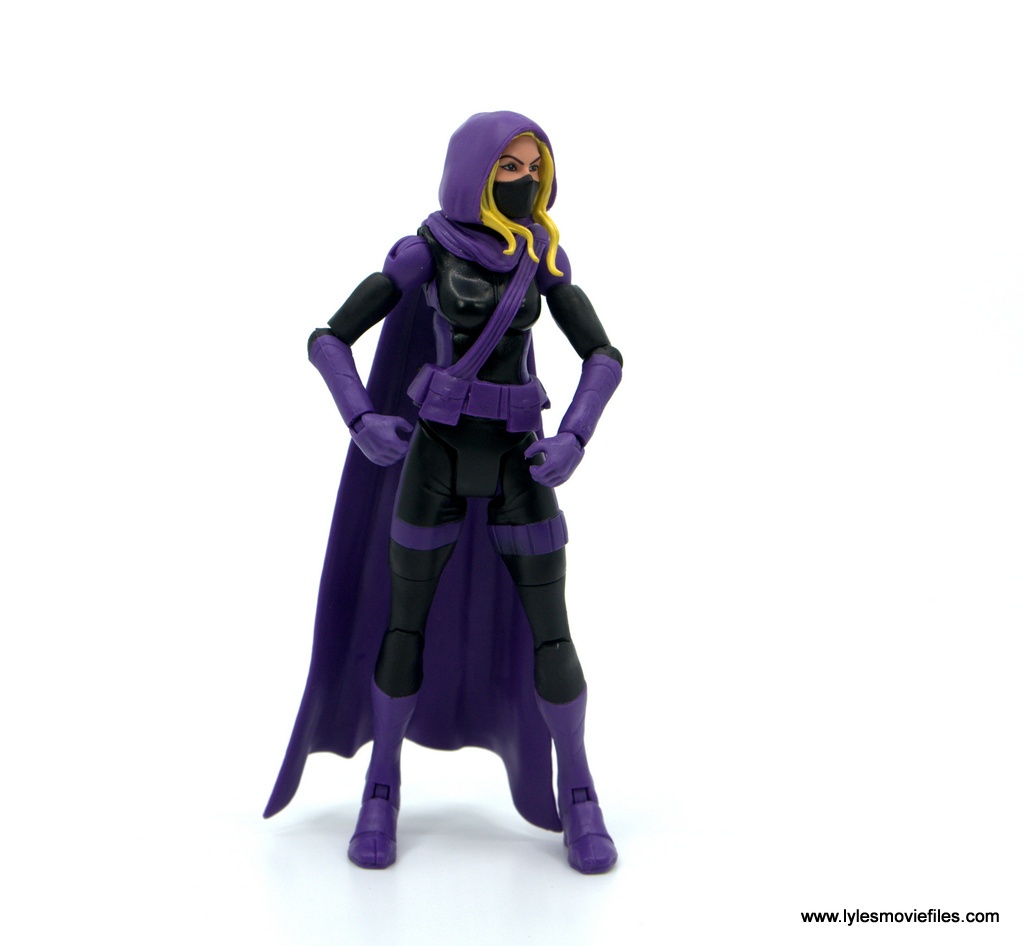 The arms are good with a bicep swivel, putting Spoiler ahead of most of the female Marvel Legends figures. The neck has more than enough range and the torso articulation is fine. But as Shakira once said, the hip don’t lie. One of the better improvements on the Multiverse figures is the hips, but Spoiler has the old school hinge hips and single jointed knees. That’s a real shame for Spoiler, who is a character that would benefit from those articulation points more than others. 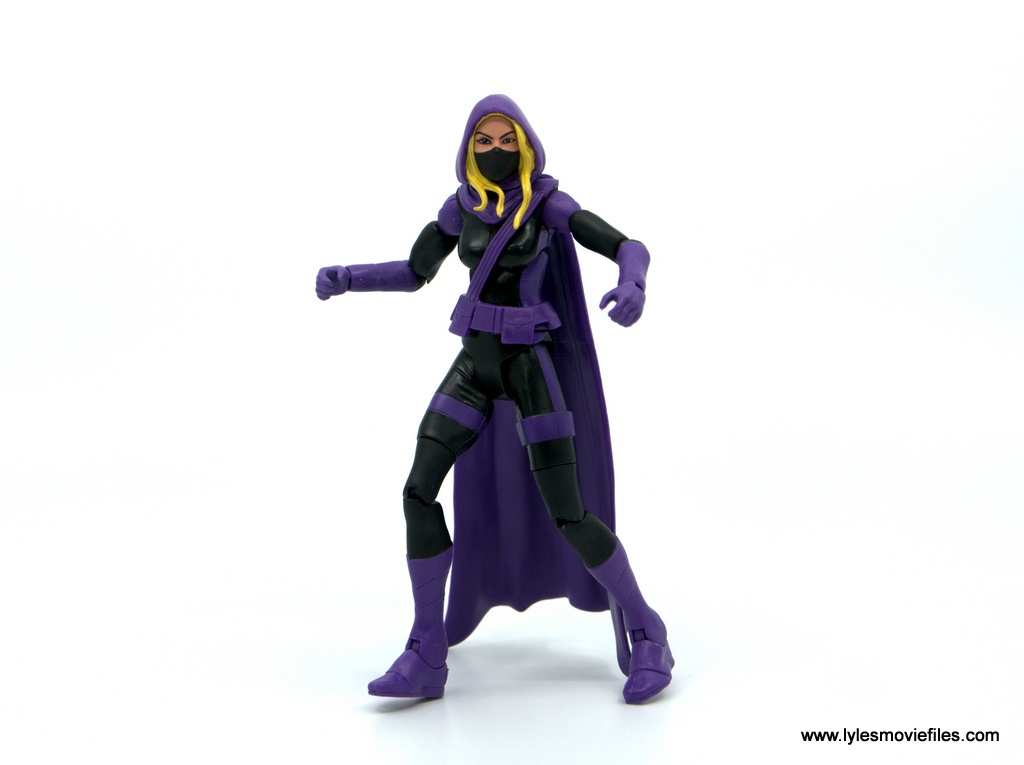 Accessories:   Spoiler comes with her sansetsukon. The chain link is plastic so you won’t be able to get the most dynamic poses out of them. 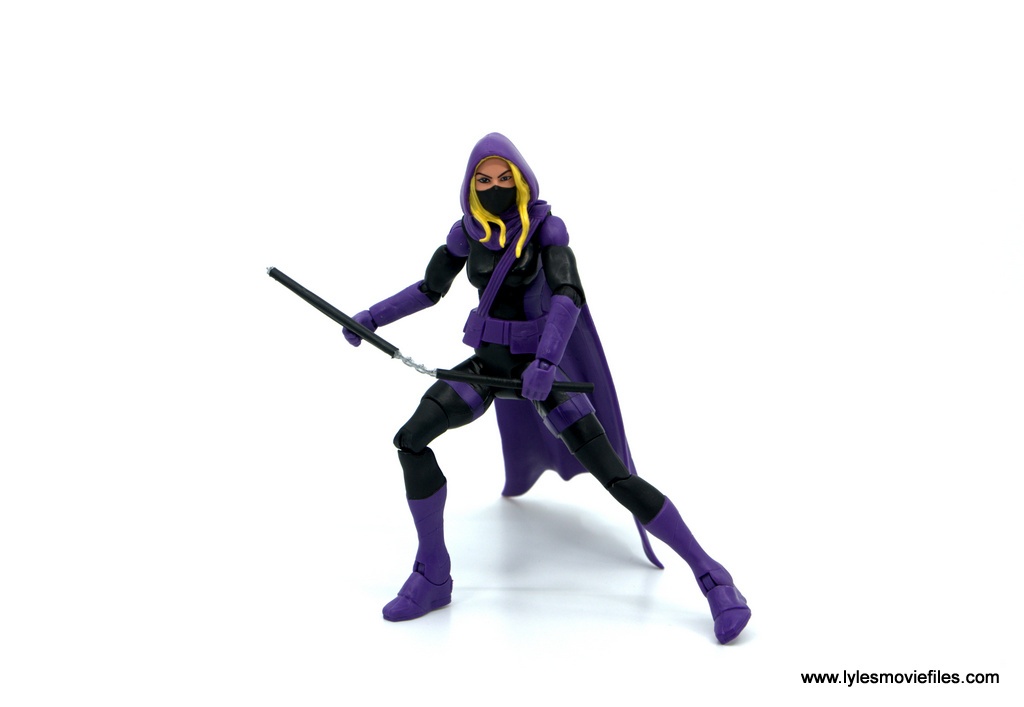 An alternate Spoiler head would have been nice, but this really covers the important elements of the character.

Additionally, she comes with the CAC add-on alternate head for Super Lex when he was becoming more like Darkseid during a Justice League mission on Apokolips. 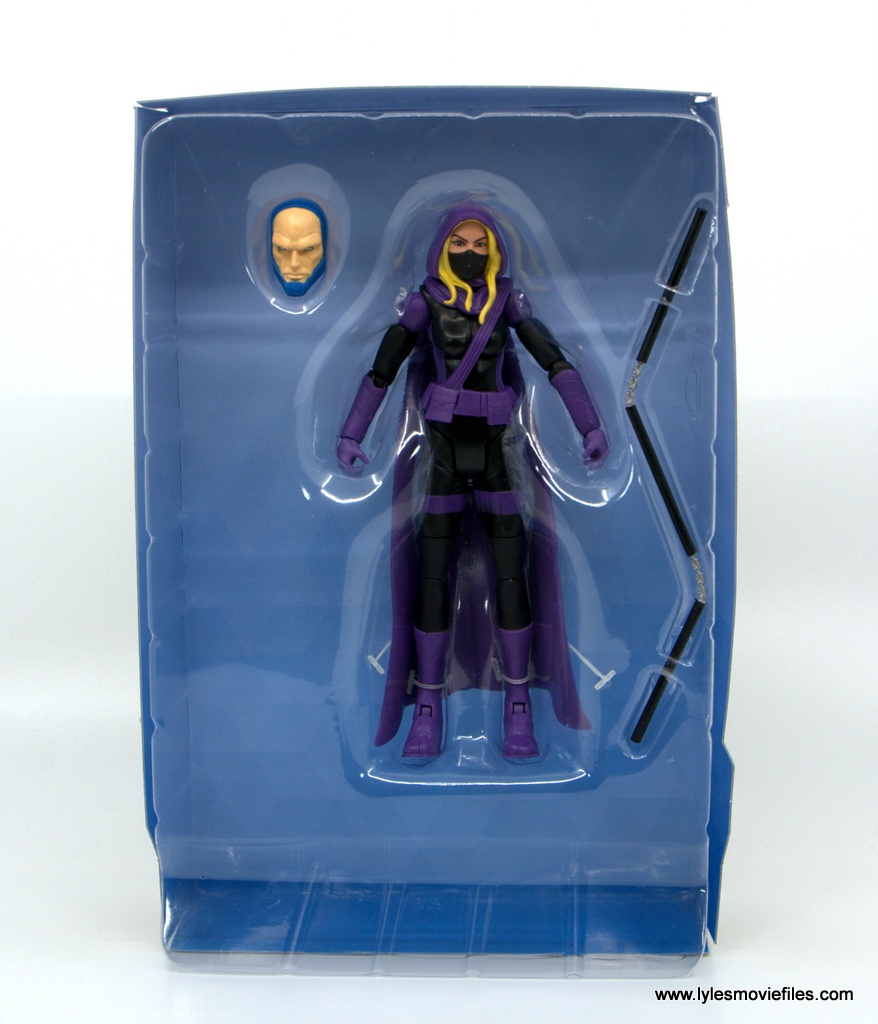 Worth it?  I got Spoiler for $18. That’s a good price for a 6-inch figure even with the articulation issues.

With the newer articulation model, Spoiler easily would have scored better. It really hurts in this instance since the articulation limits more Spoiler-type poses. 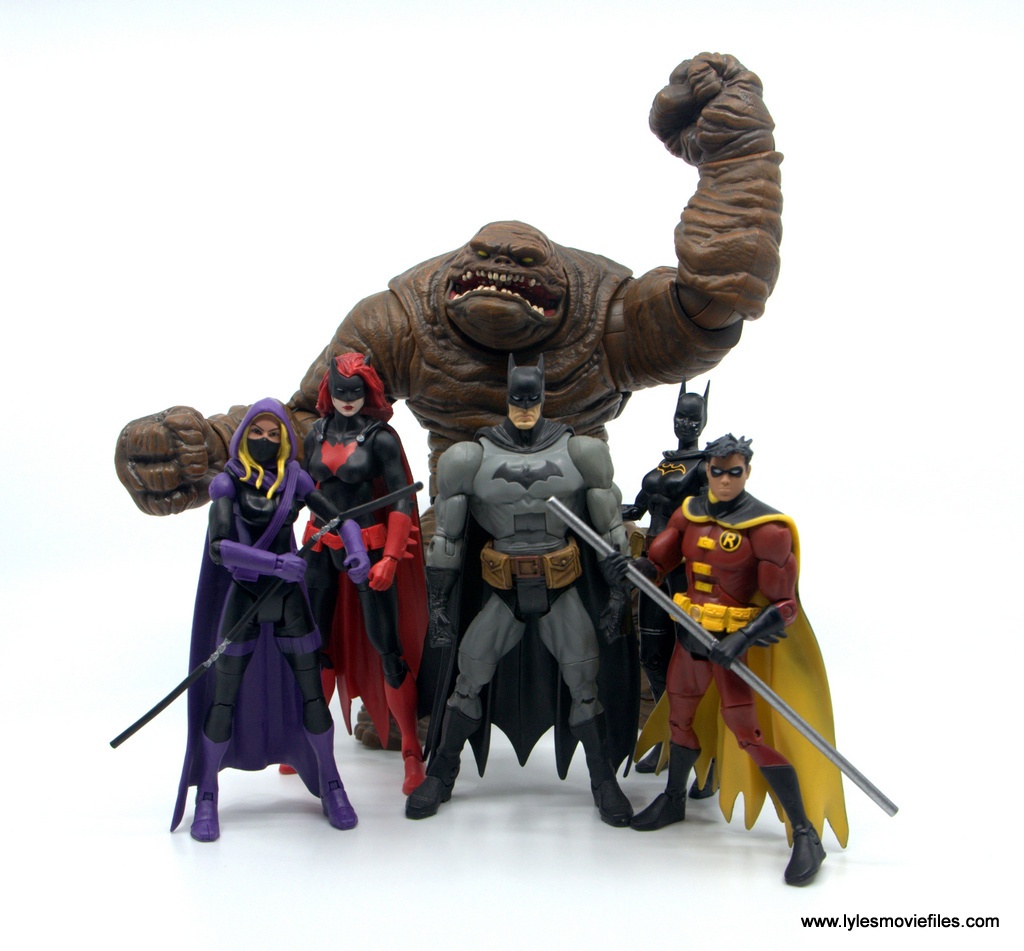 Where to get it? Wal-Mart is the exclusive source for Spoiler and Harley Quinn though other retailers will likely get them on the secondary market like Amazon.com.