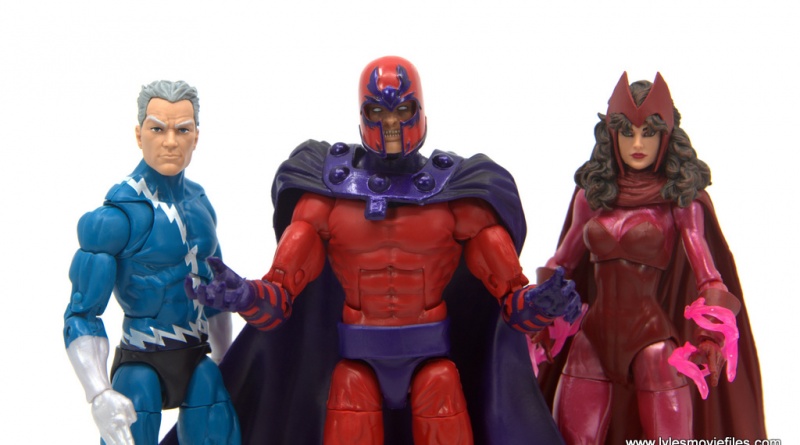 You know the old saying, get new Marvel Legends they immediately cut the line especially when they were three figures desperately in need of an update. Ever since its reveal, I’ve been anxiously awaiting the Marvel Legends Family Matters three pack of Magneto, Scarlet Witch and Quicksilver.

I’ve been using the Toy Biz Magneto so this update was long overdue for me and I was looking forward to a Scarlet Witch that wouldn’t wilt due to high heels. And Quicksilver was one of the holdouts from my Top 15 Marvel Legends Hasbro needs to redo list so I was thrilled to add him.

Enough talking. Let’s get to it!

Packaging:   The package is pretty simple here and besides the Marvel 80 Years logo, it’s a standard ML packaging. It was interesting that the package labels this as an X-Men set and the bio focuses more on Quicksilver and Scarlet Witch’s tenure with the Brotherhood of Evil Mutants instead of the Avengers. Based solely on the presentation, I’m surprised we didn’t get a green Pietro and earlier edition Wanda. 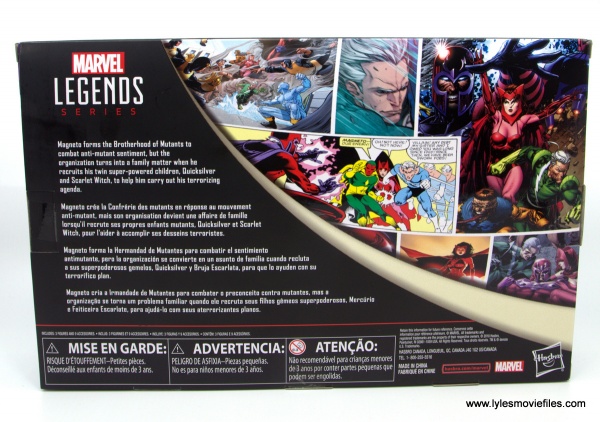 The insert is neat as it’s got a GI Joe style explosive burst, which looks like a comic book explosion, which could be helpful for displays.

Likeness:  Jim Lee drew everyone like Superman with Magneto not looking like he skipped chest, arms or leg day in seven years. I prefer the sleeker Dave Cockrum style so this figure is more of my definitive look. 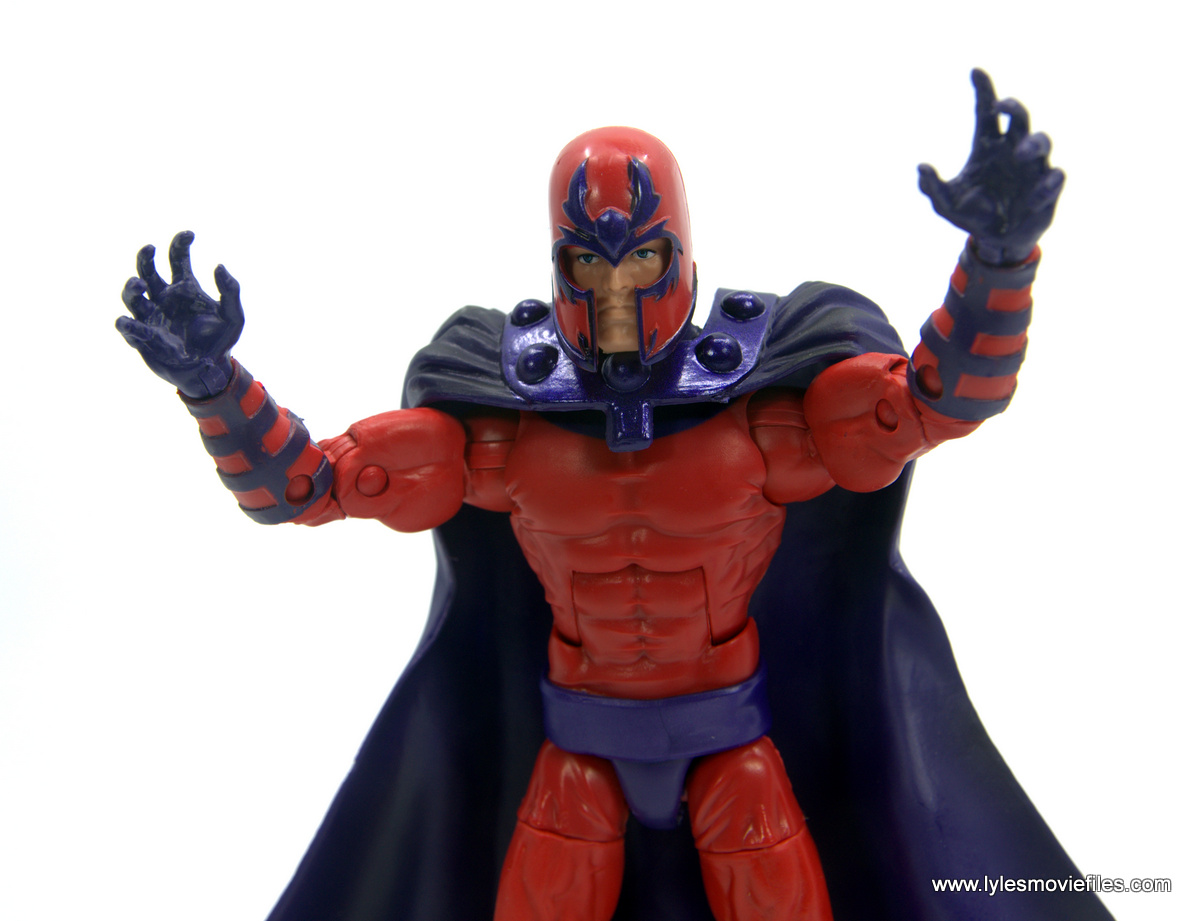 There’s something a little off with the serene head sculpt like maybe the helmet is too elongated. I’m still not sure if a Magneto head sculpt is better than the original Toy Biz one. Maybe it’s worth a swap?

Besides the head, this is a pretty definitive Magneto for me with sculpted slits for the gloves and boots and the proper heft of the cape, which has the ideal length and flow. 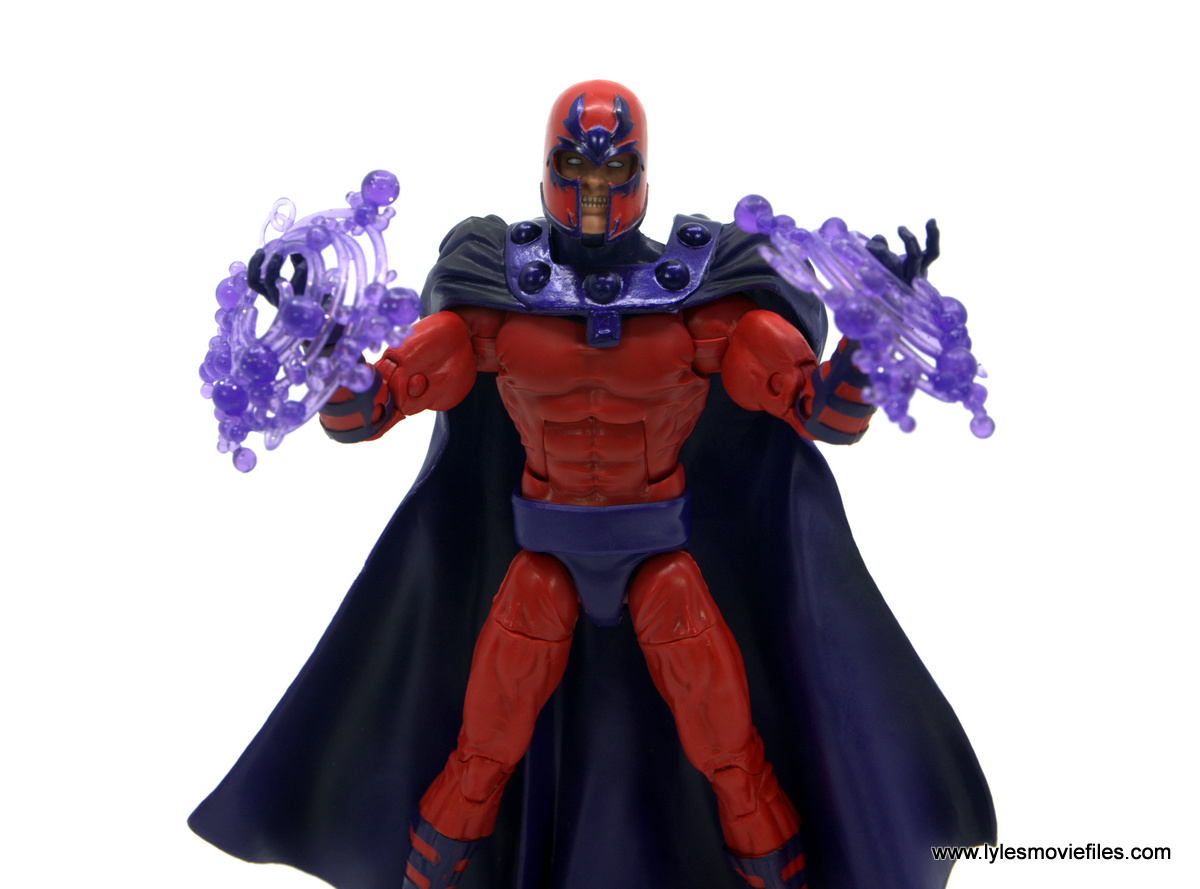 Quicksilver doesn’t have as many distinguishing features save his two points atop his hair. Hasbro opted for a running hairstyle with the hair points not prominent at all. The head is also larger than I’d like by a fraction. It’s got a slight hint of arrogance with a smirk showing his supreme confidence in his abilities. 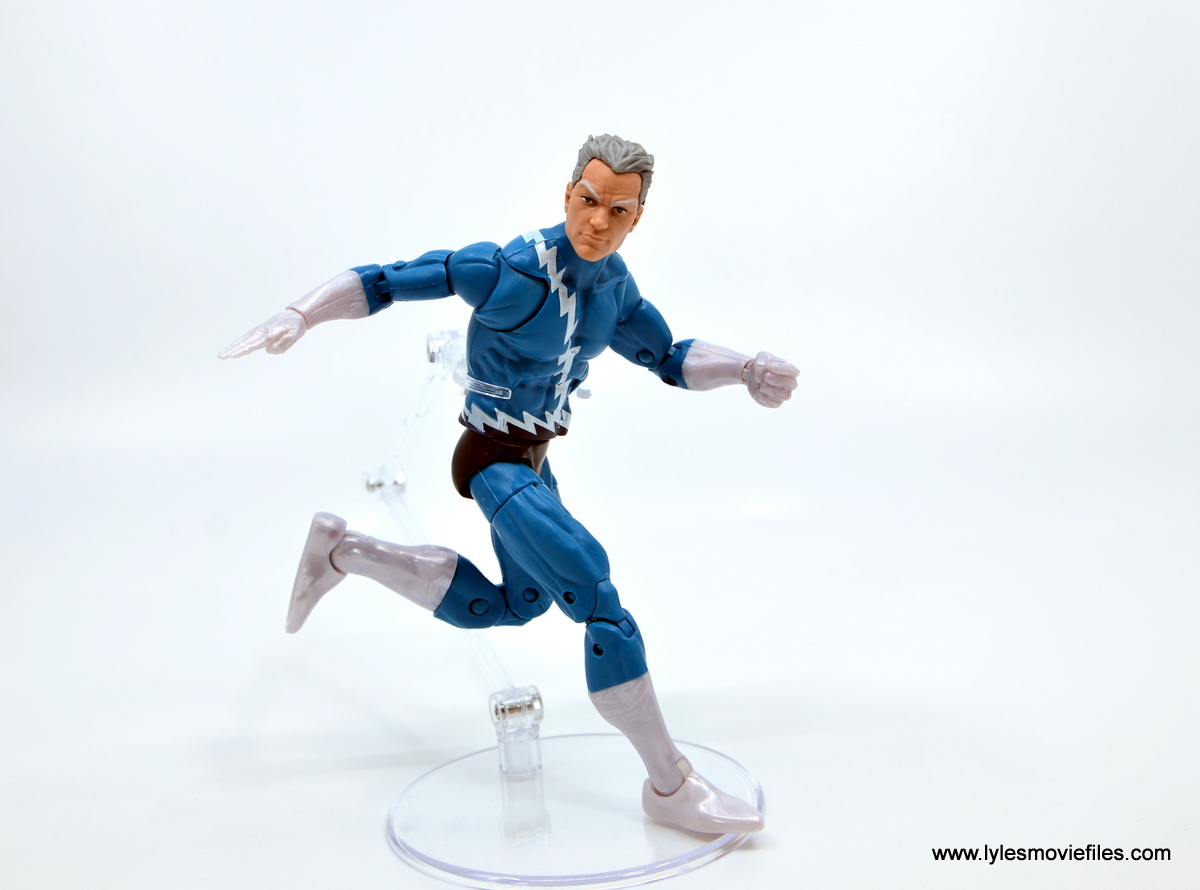 Scarlet Witch is the gem of the set though. Her head sculpt might be the best we’ve seen yet in this line with naturally flowing hair that extends below her tiara. I like the neutral expression as it fits for Wanda. 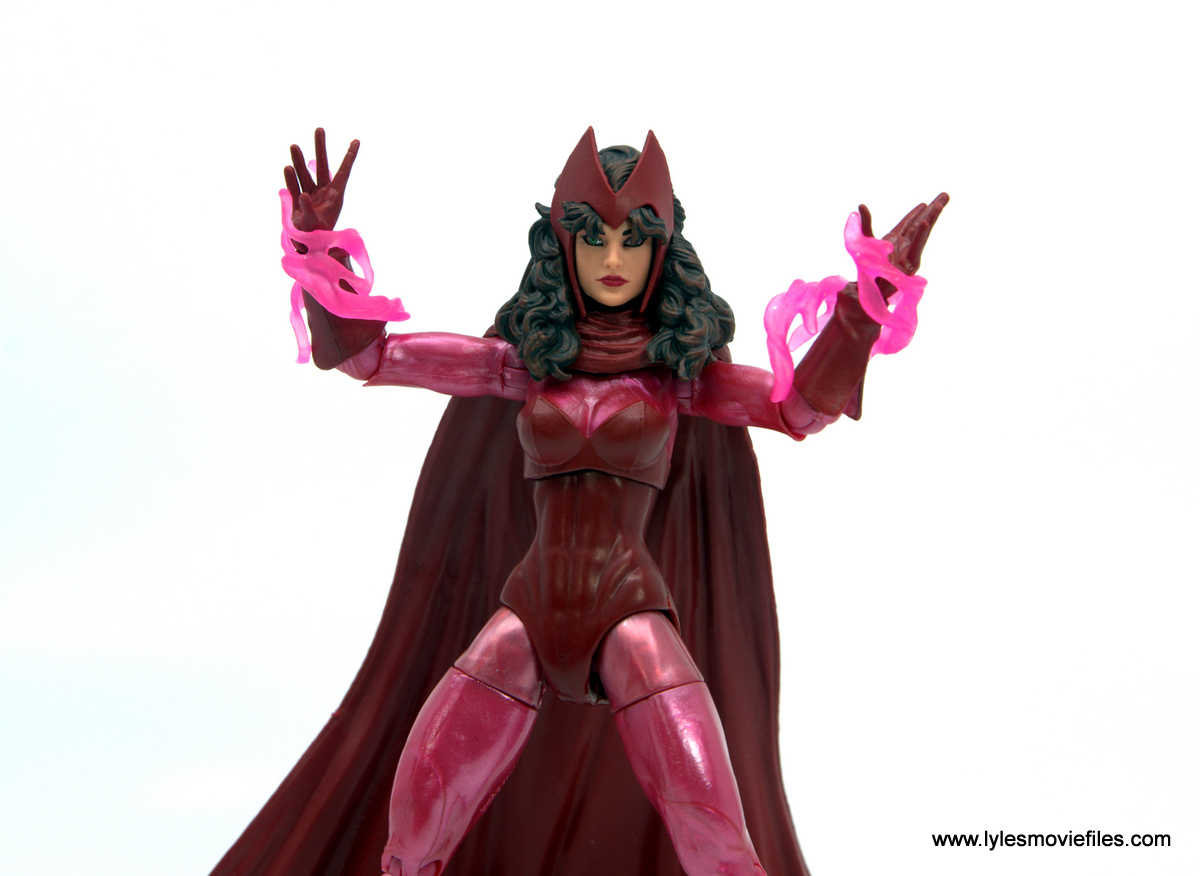 Paint:  No complaints on Magneto. This is his classic colors and they were done beautifully. I had some slop on the right gauntlets, but otherwise the paint was clean.

Quicksilver’s blue is darker than it is in the comics, but the blue is consistent with a bold white lightning bolt across the right shoulder to merge with the belt.

My figure had some problems with the lightning bolt applications, which is a little annoying. 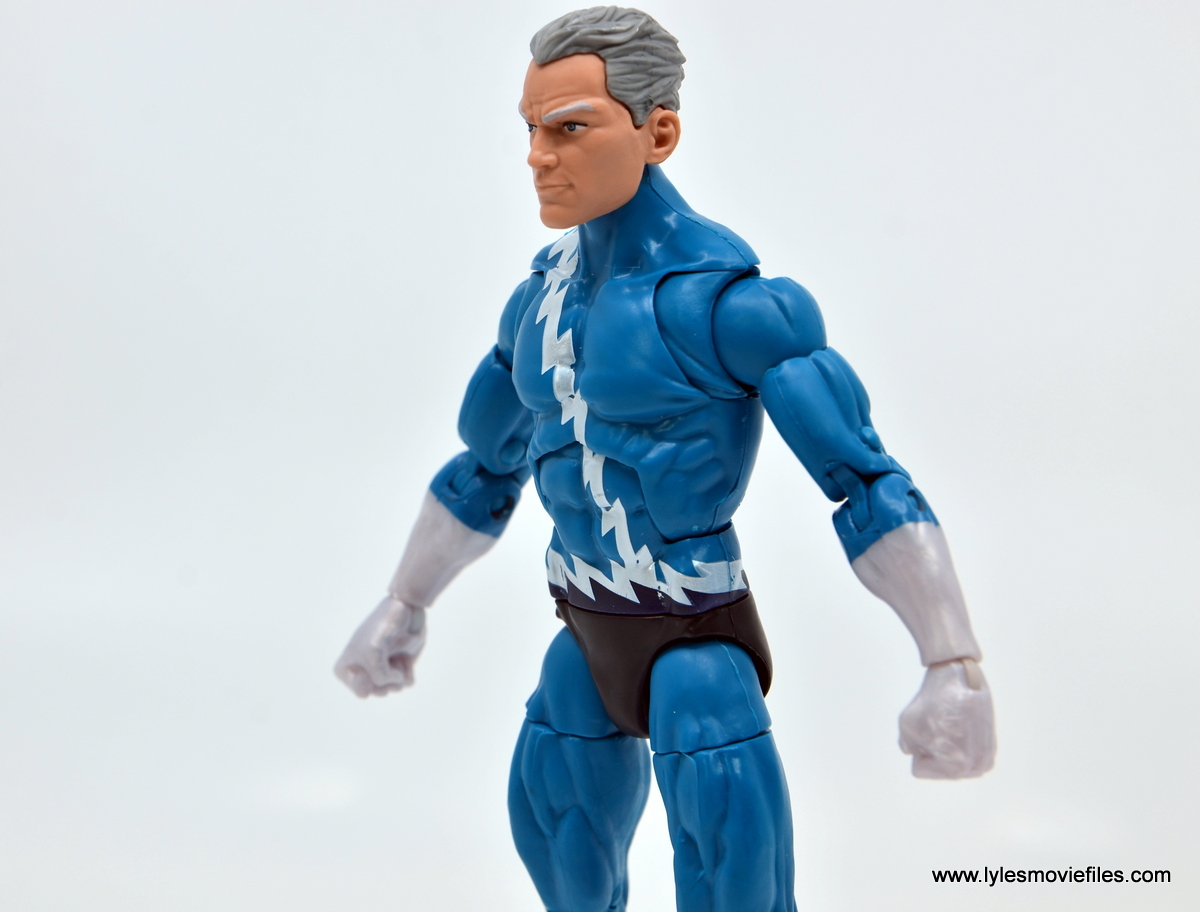 In most cases, Quicksilver is drawn with an exposed neck and a small circle collar area. Hasbro went for a completely colored neck, which is a change. Finally, his hair really should be bright white and not grey. 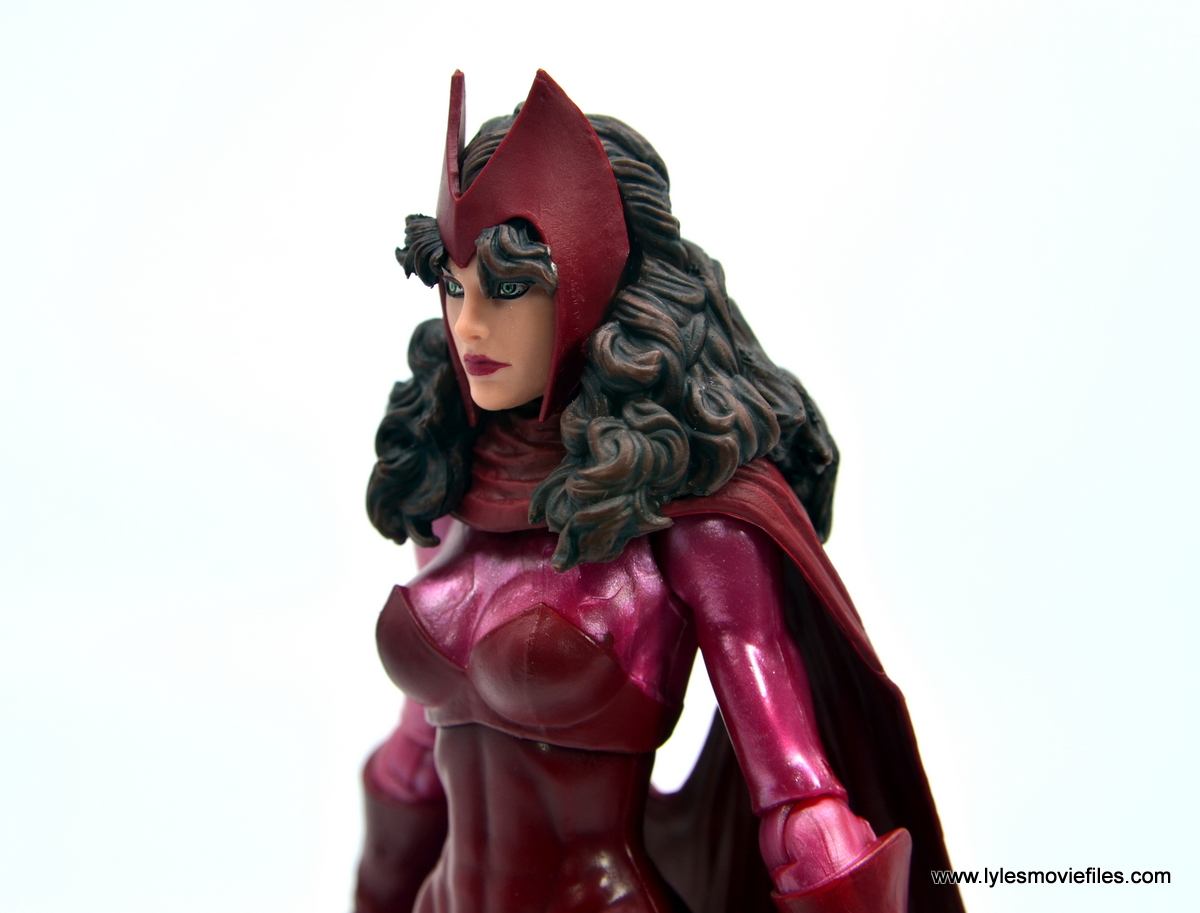 Scarlet Witch is the most controversial of the set with her darker pink and red. I’m fine with the shade since it has more of a witch look. The pearlescent paintjob came off very clean and the work on the head and hair is pretty impressive. Still, I can see why people who want a more traditional shade would be upset.

Scale:  Magneto is regular height and doesn’t need to be the tallest mutant in the yard. I like his height as Magneto isn’t tall simply because he’s one of the most powerful mutants running around. Again, my preference for the character is far more just looking Cyclops eye to eye…or visor. 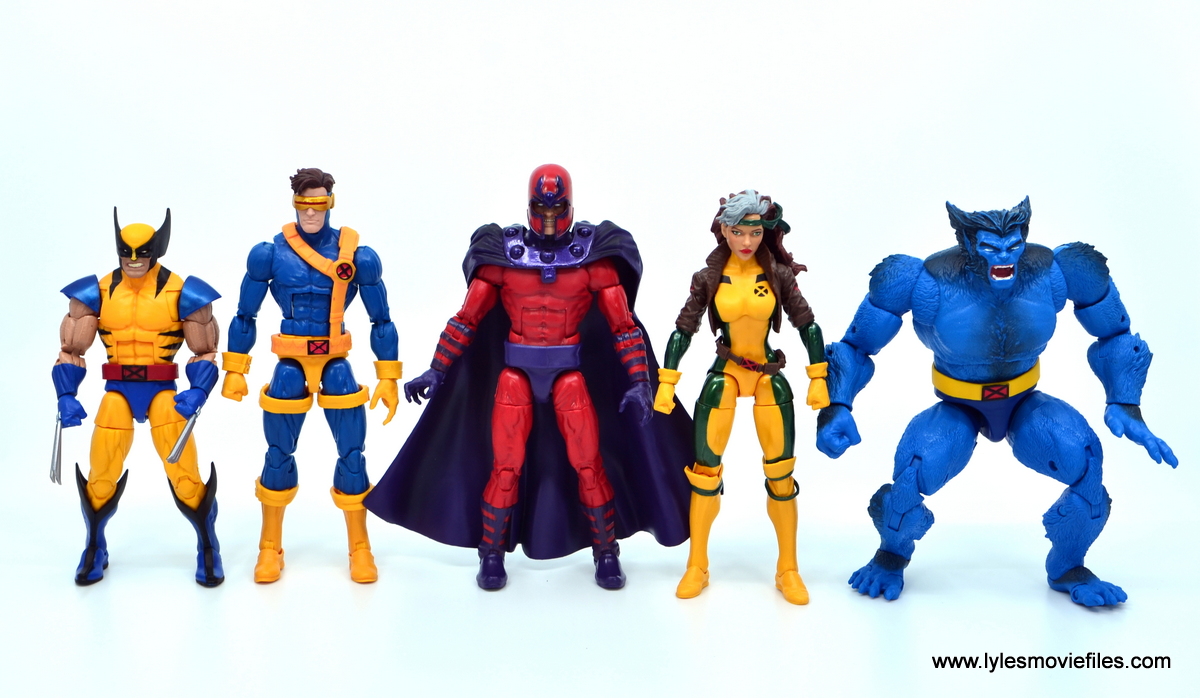 Quicksilver uses the Sunfire body, but looks a little taller because of the size of his head.

Scarlet Witch is about the same height as most ML females and as a bonus, she doesn’t tower over Vision this time, which is nice. 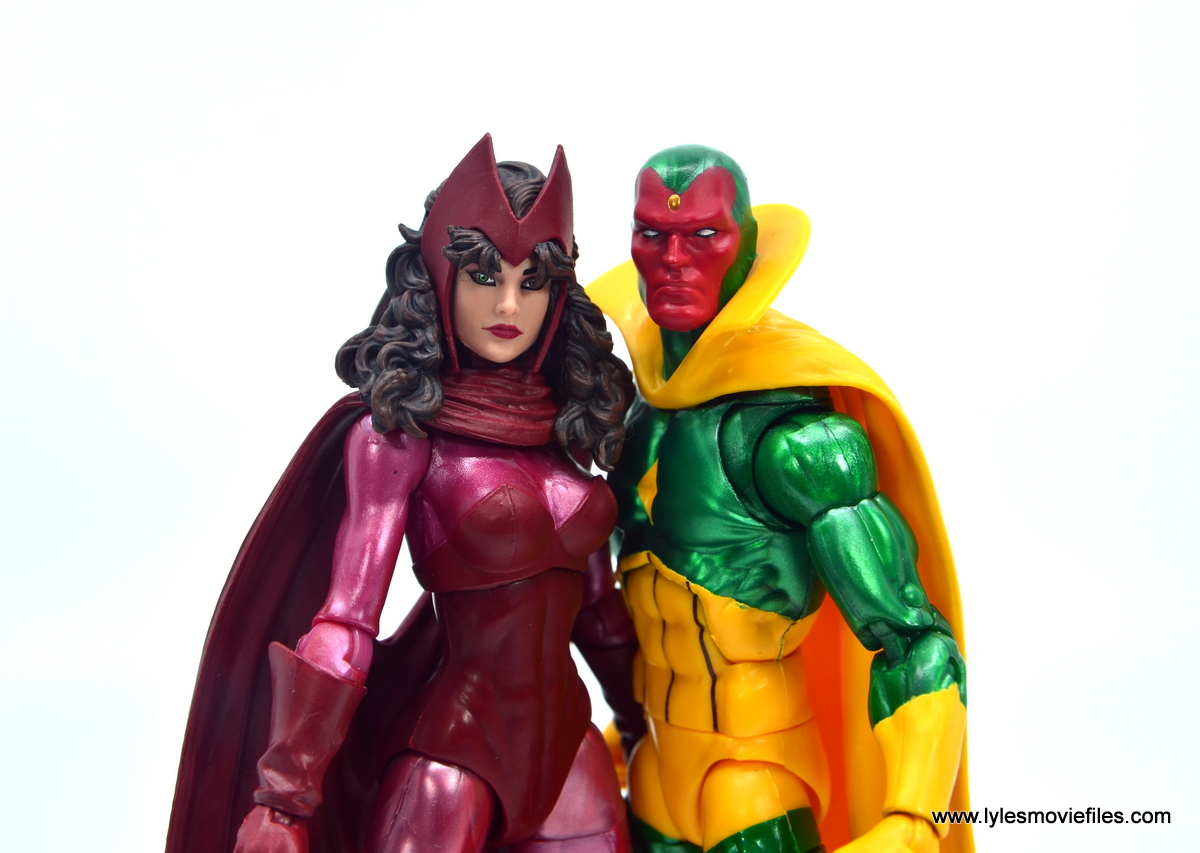 Finally, the twins match up better than with the Odin Father Scarlet Witch. 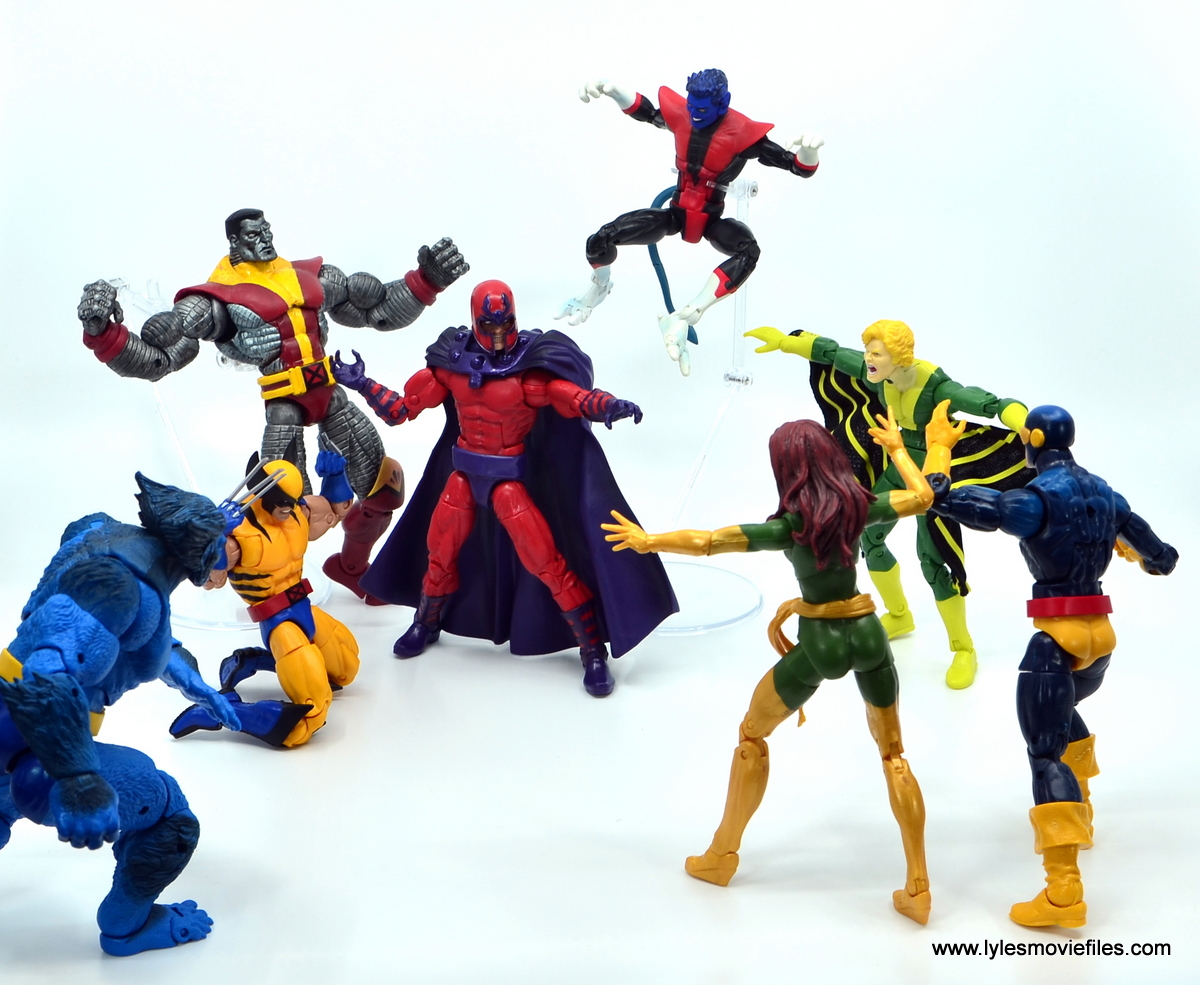 Articulation:  Magneto’s cape proves a little annoying as the plug kept popping out on me. That sends the shell-like set up all out of whack and is annoying. Hopefully super-glue will fix that without messing anything else up. 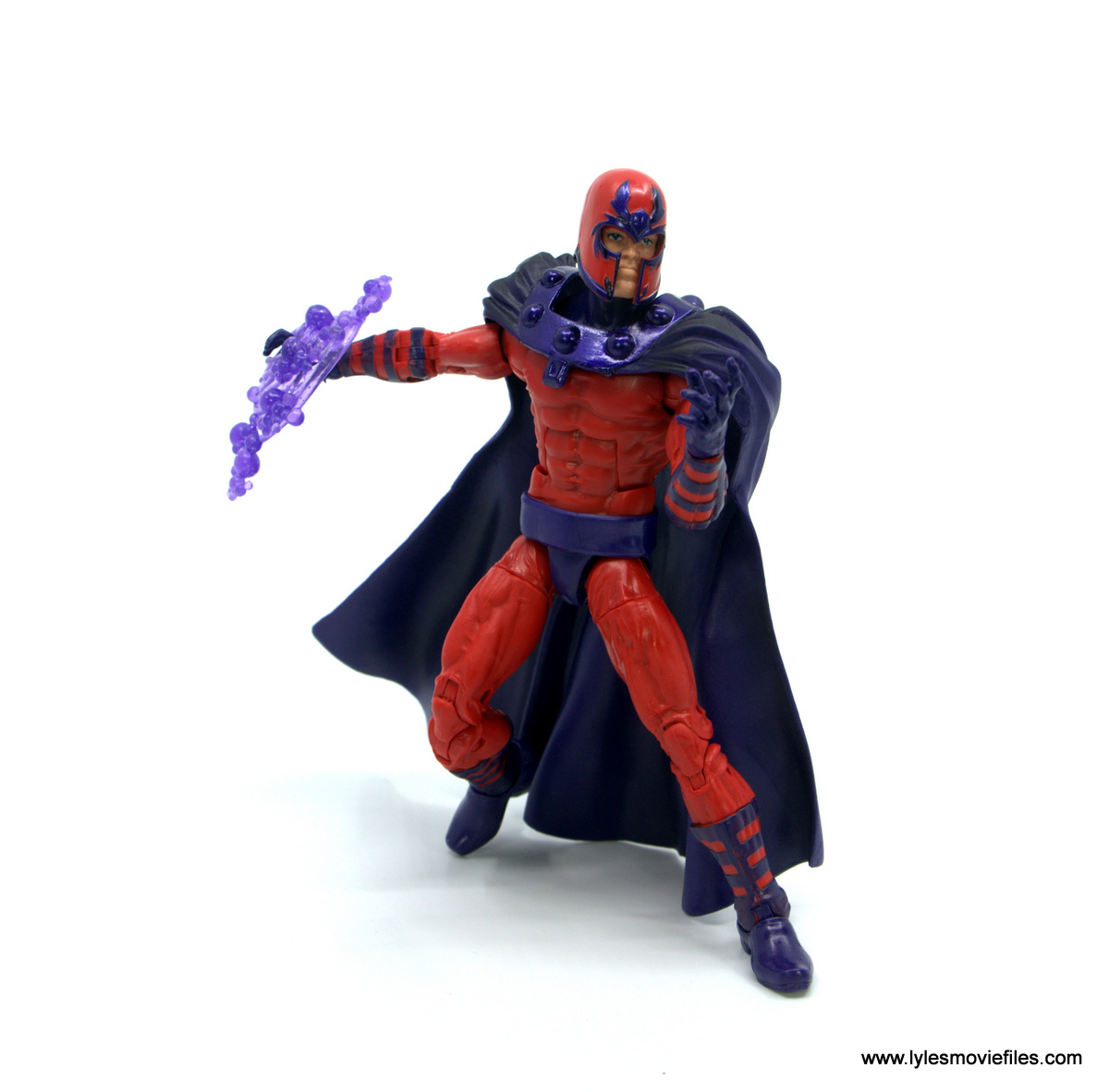 Beyond that, his movement was great and I could hit all of the signature Magneto poses I could envision. 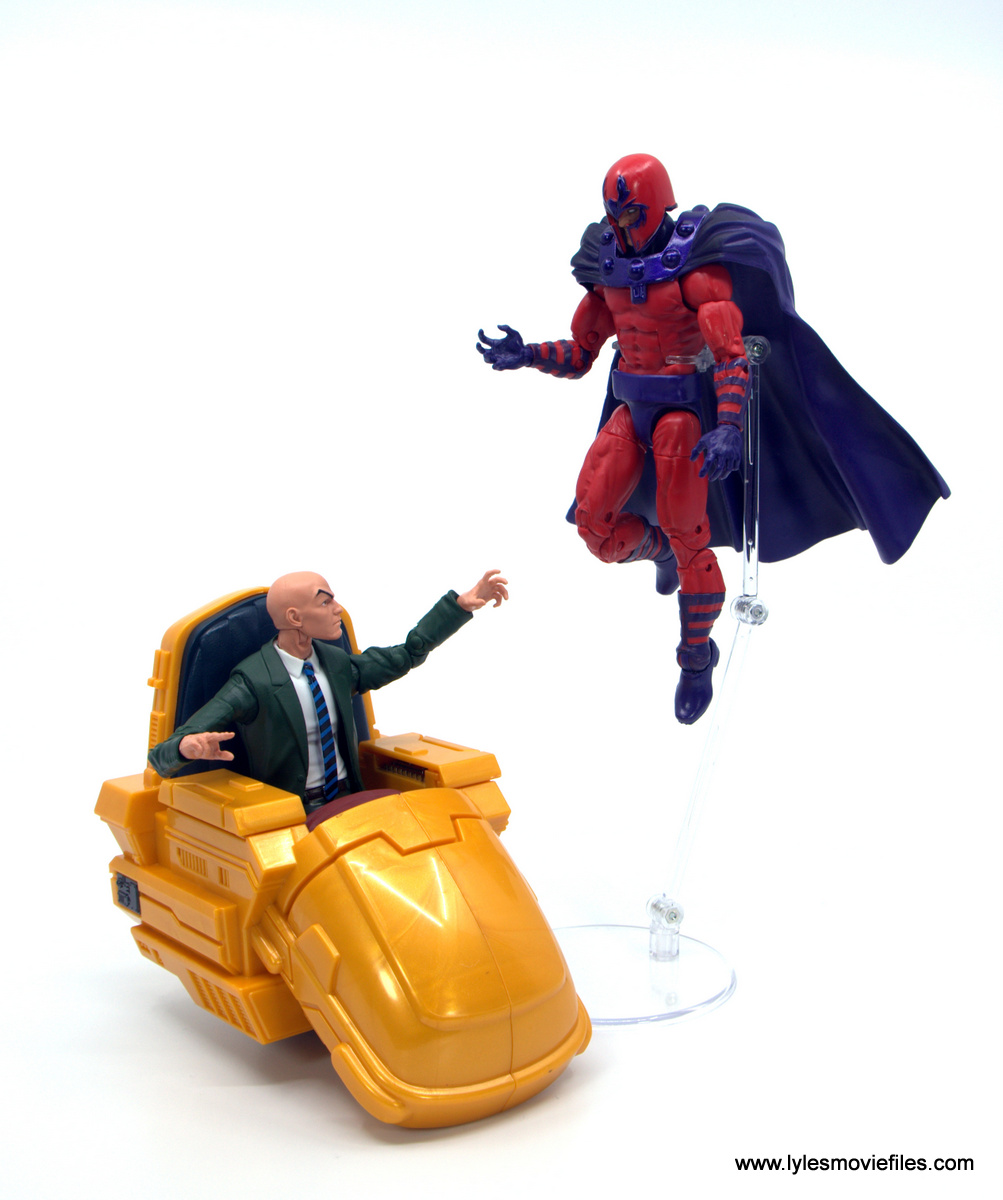 Quicksilver doesn’t have articulated feet like the original Hasbro figure, but blows him away on every other front including being able to hold and sustain natural running poses. Hasbro gave him good neck range so he could crouch low and still take a running stance. 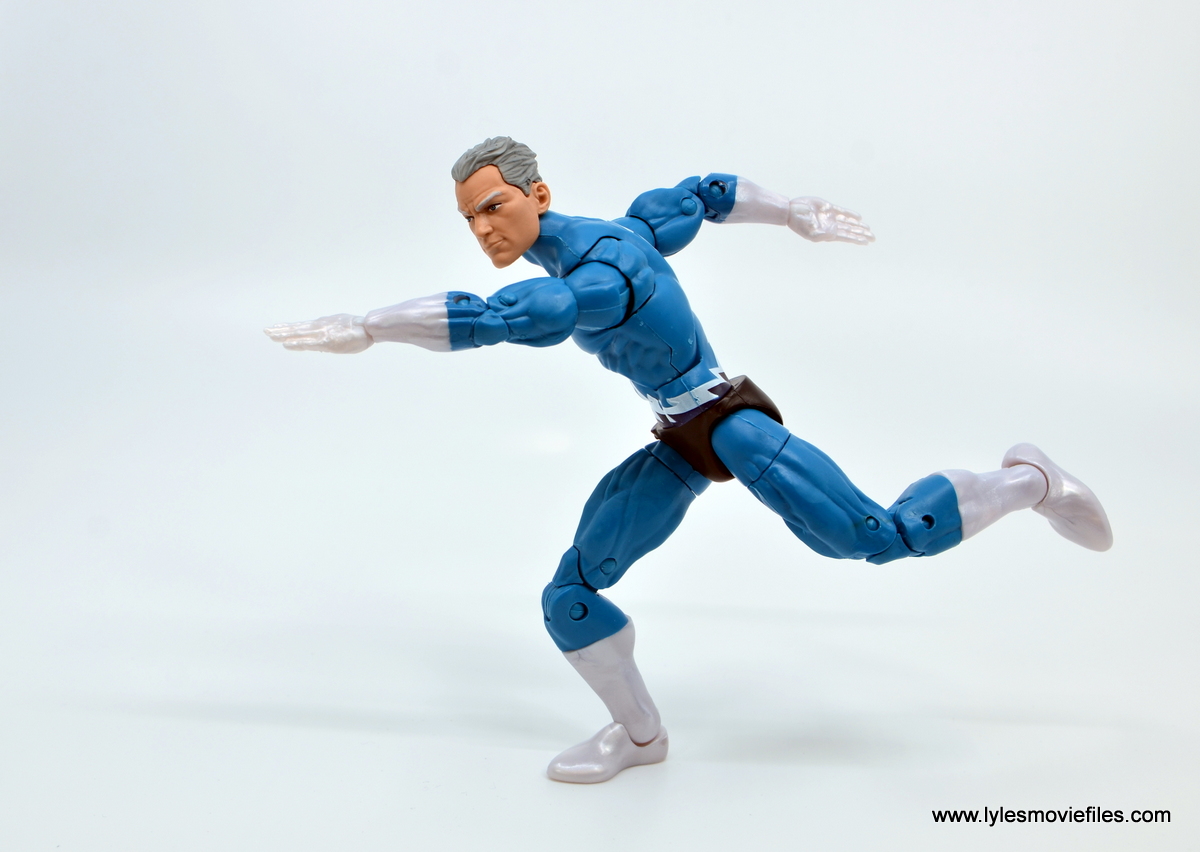 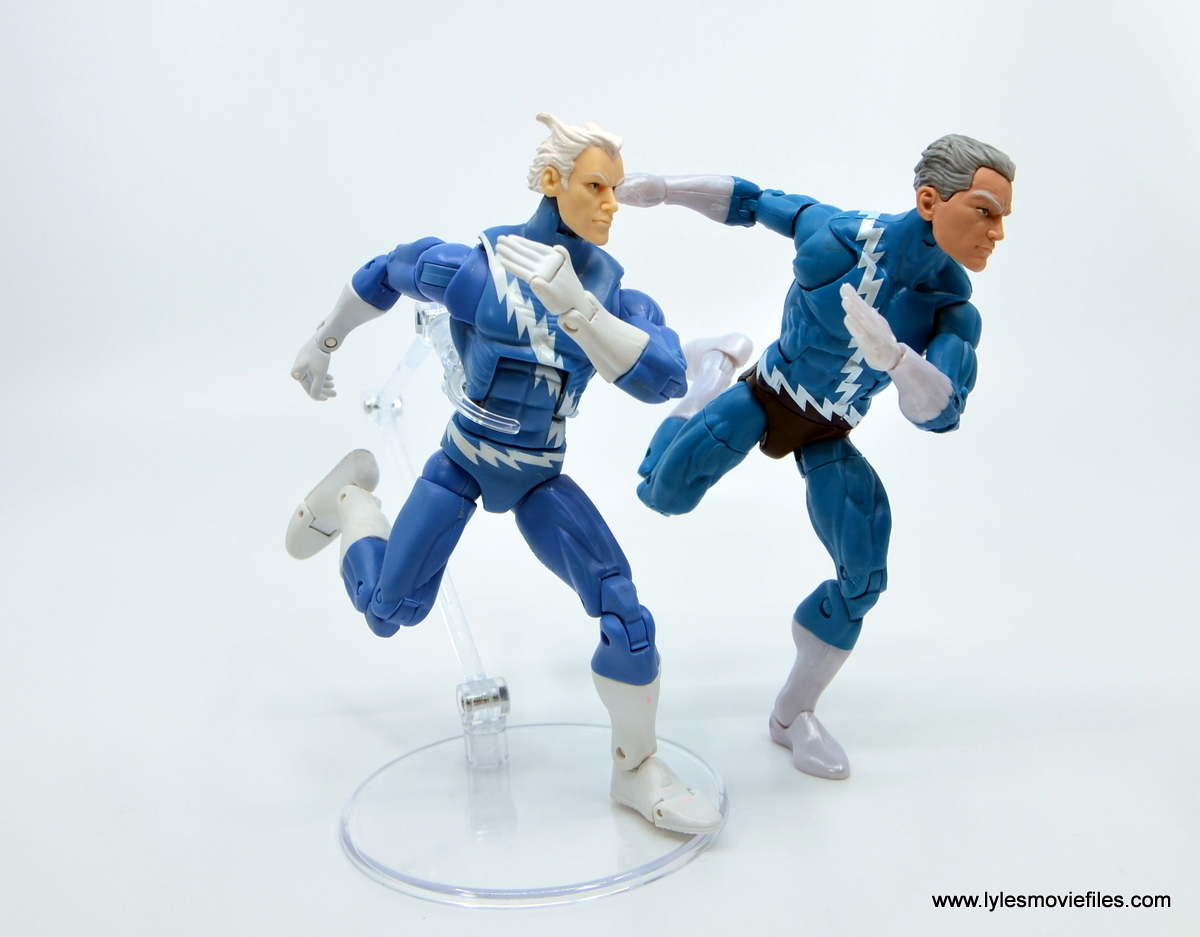 Scarlet Witch as usual needed bicep swivels and her hair restricts some of the more natural side to side movement, but she’s able to hit basic hex conjuring poses. 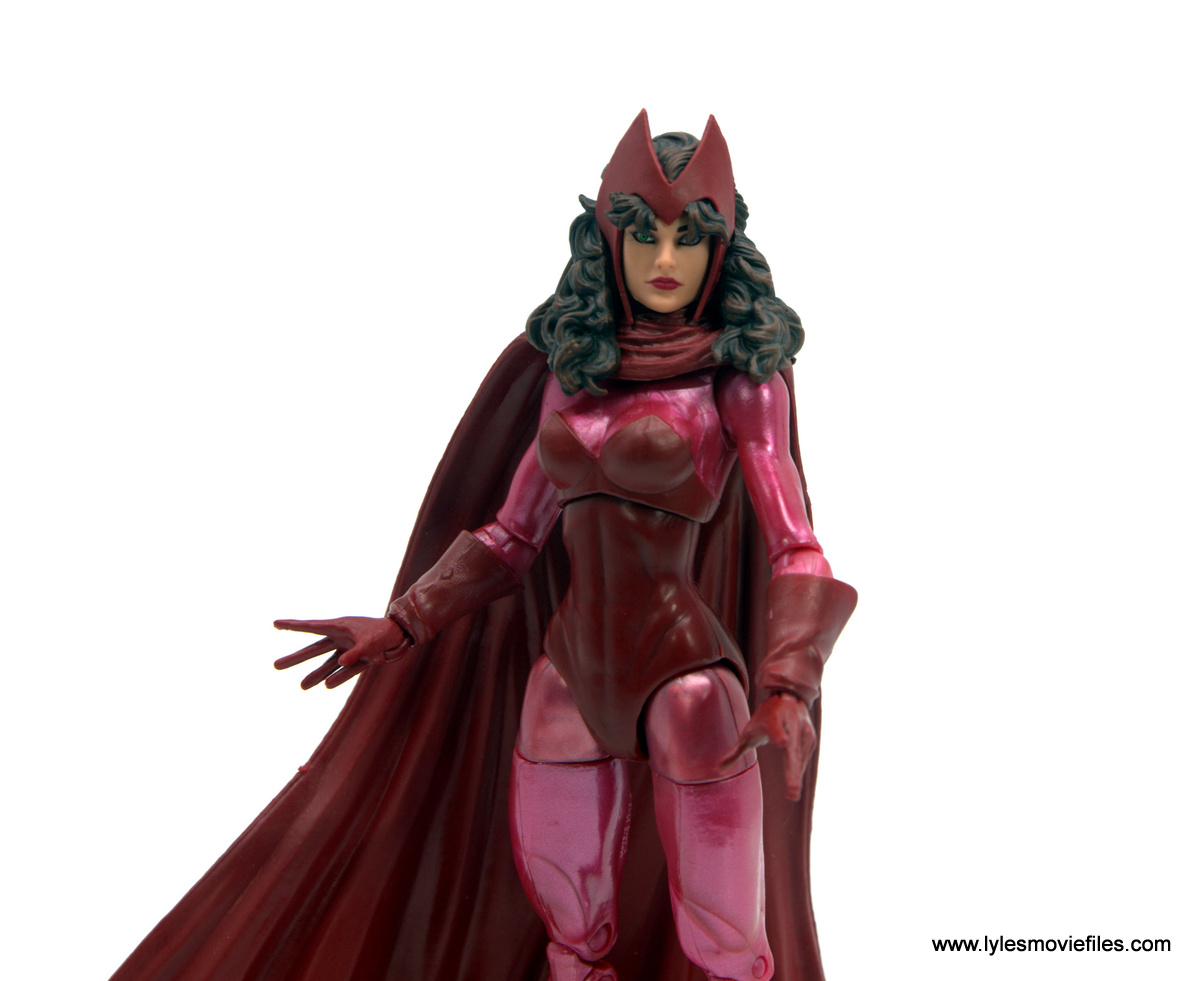 I also really appreciate that she can stand without wilting like the Odin Father version. 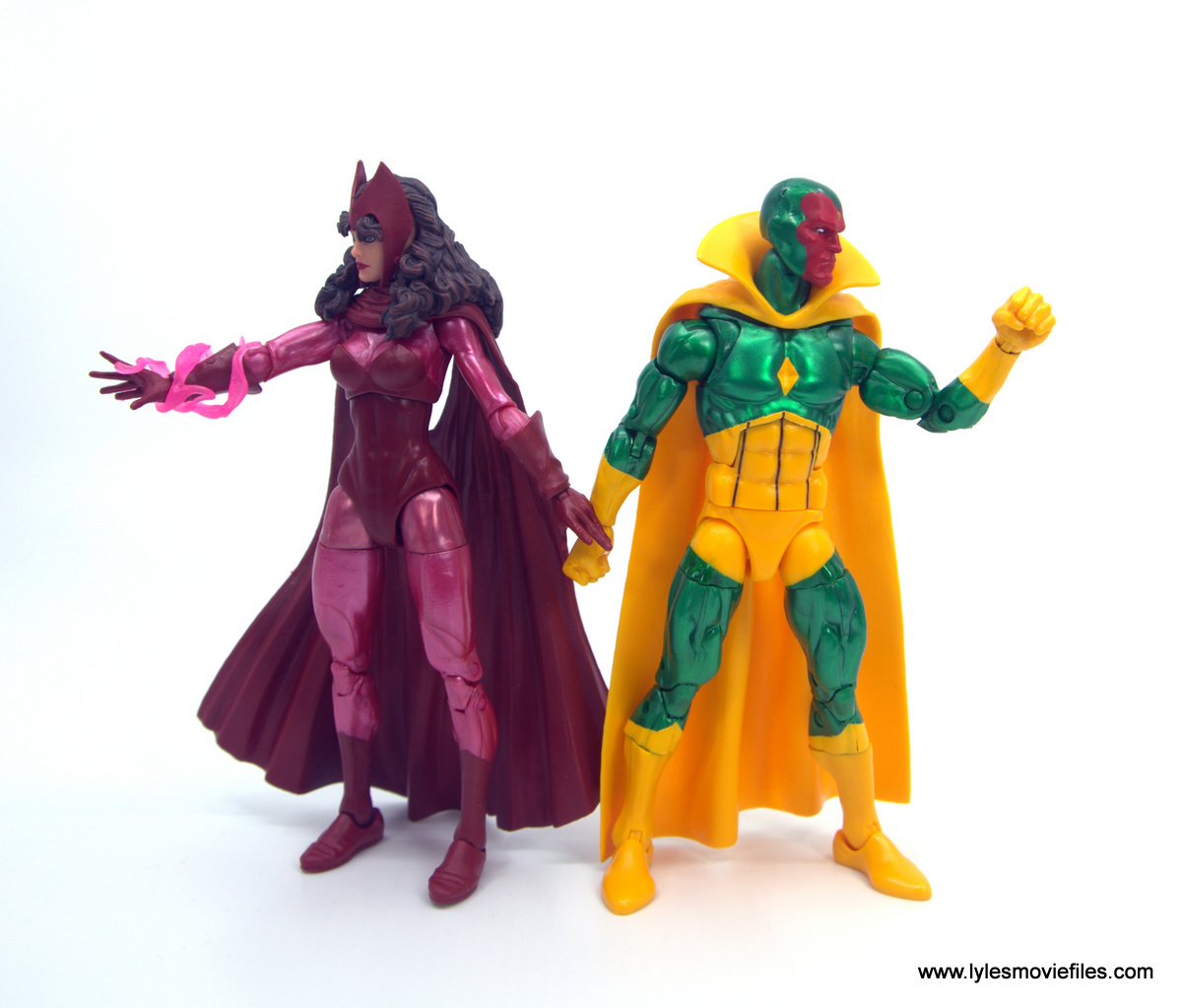 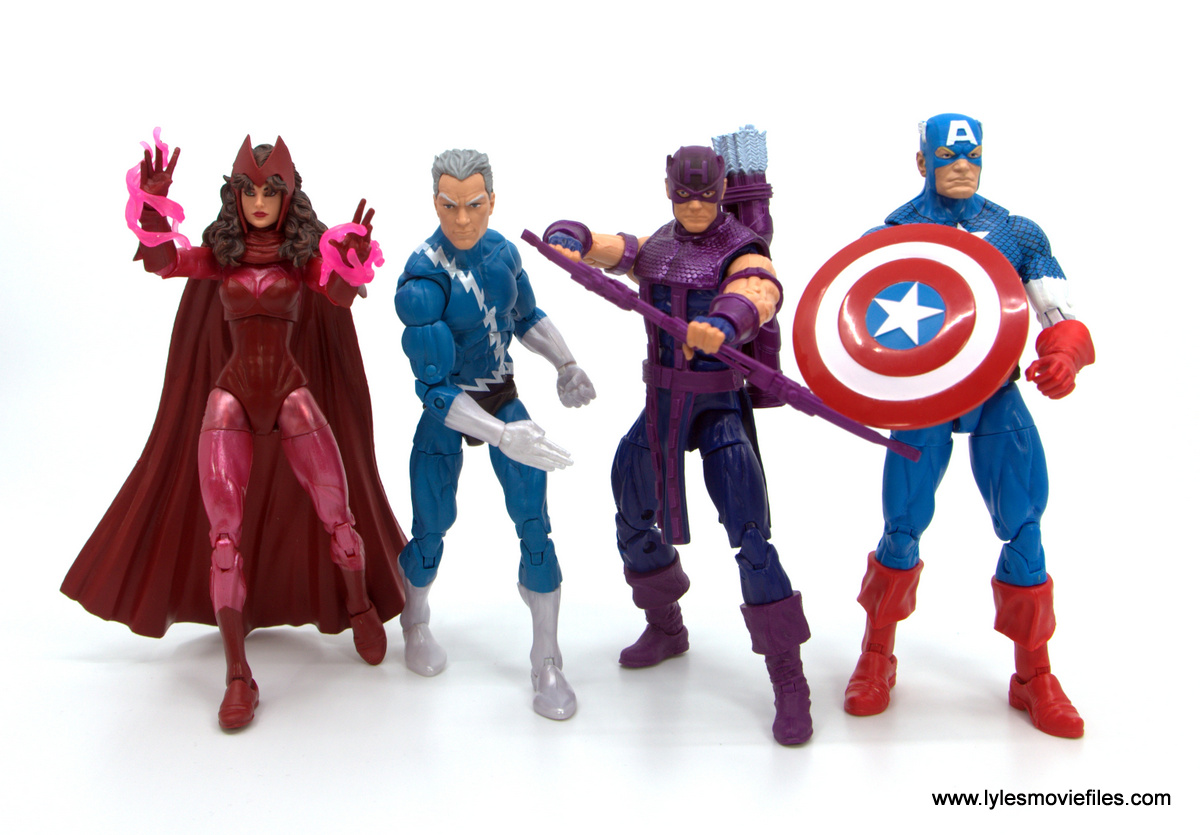 Accessories:  Hasbro made sure everyone got a little something with this set. Quicksilver comes with an alternate set of hands for running poses. That’s perfect and allows for some welcome display and posing versatility so Quicksilver can punch out people and just zoom along. 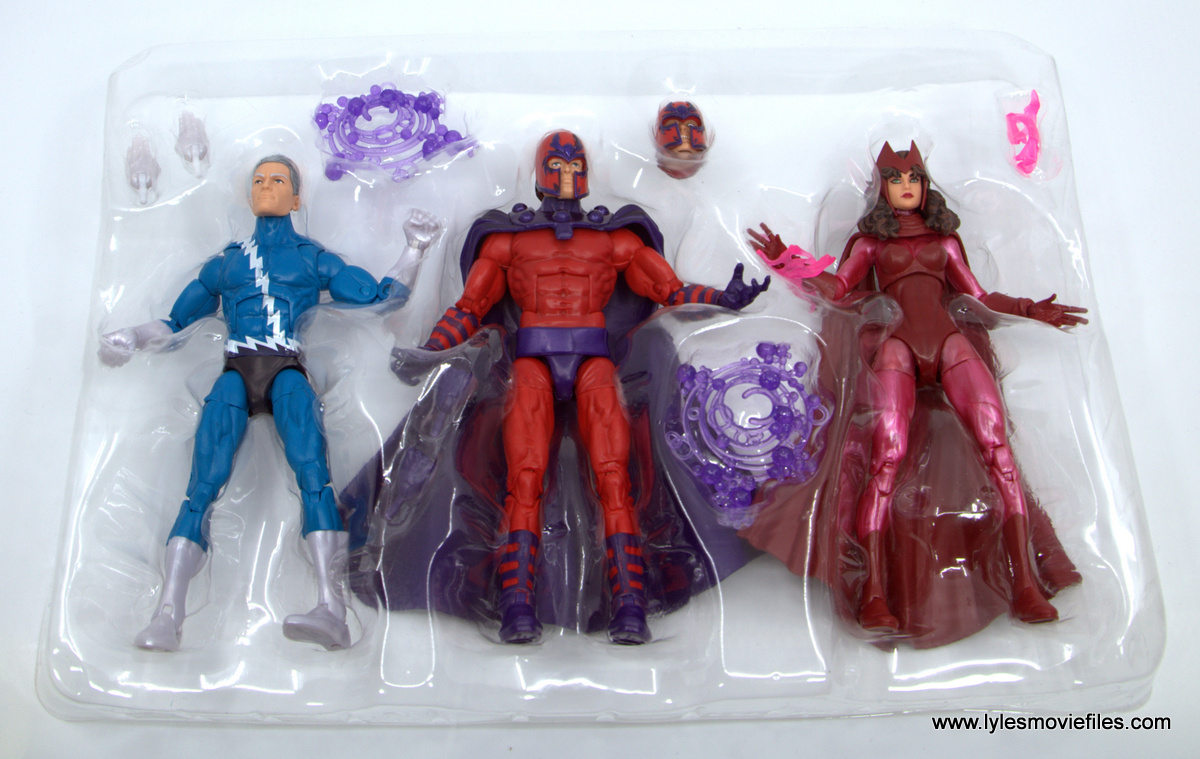 Magneto comes with purple translucent versions of the power blast. That’s fine as there was no reason to think Hasbro was going to create a new effect piece for him. 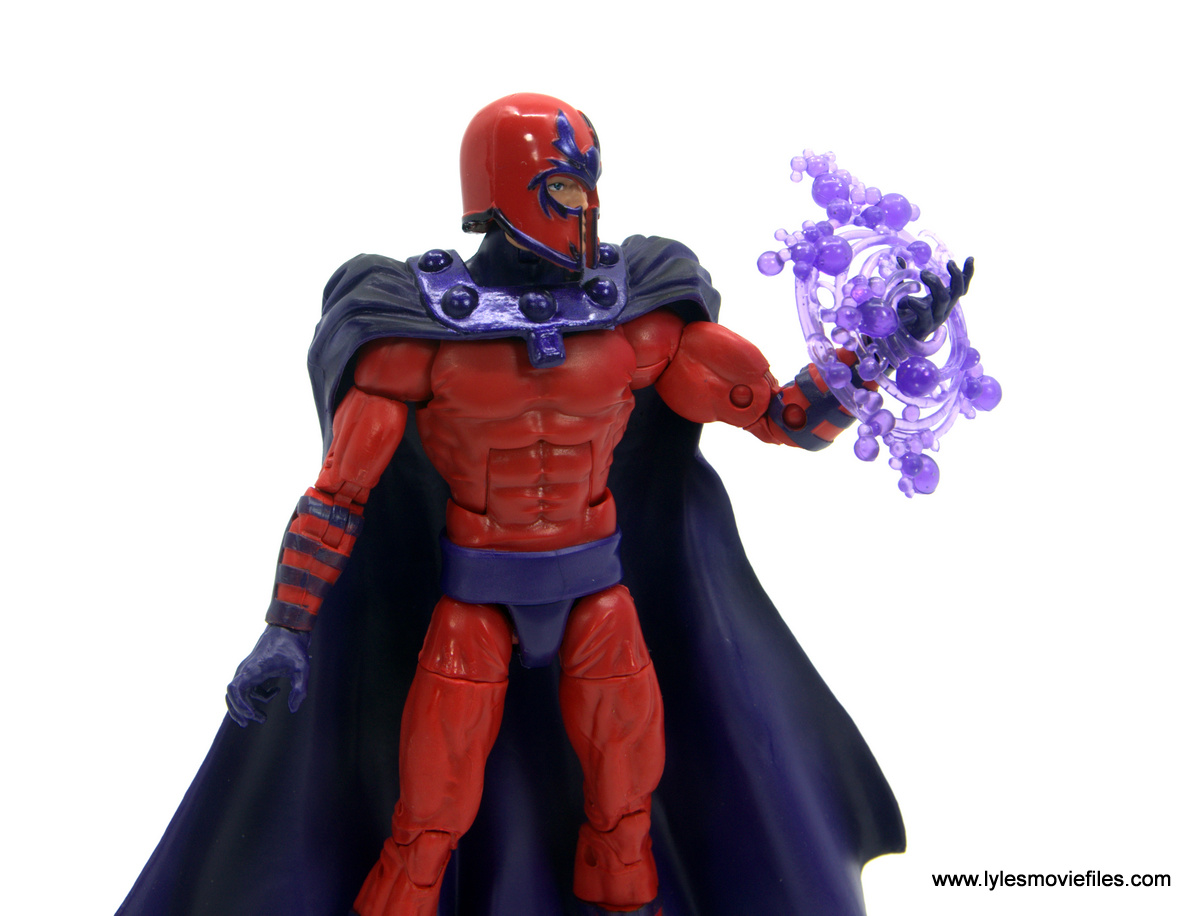 The bonus though is the alternate head sculpt with white-out eyes and gritted teeth expression like the X-Men #1 cover. 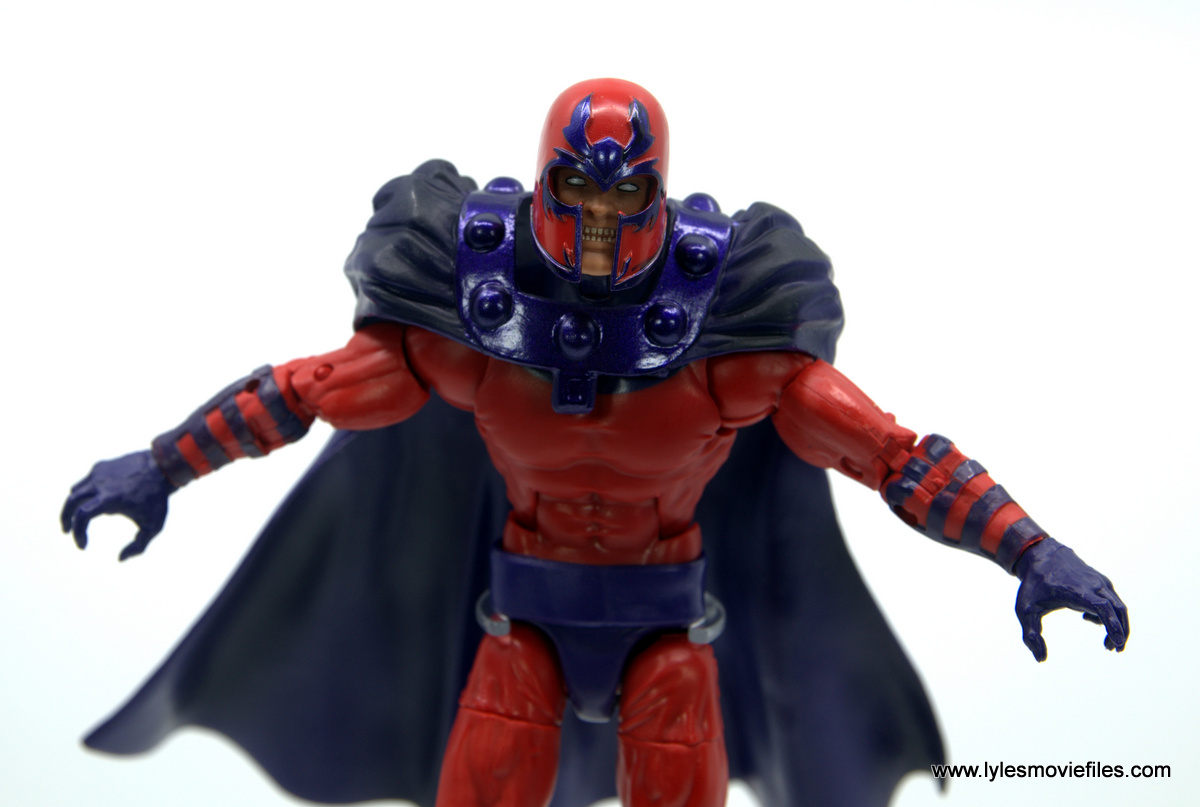 It looks great and is probably going to be the default for a lot of shelves.

Scarlet Witch does seem to have a newer piece with wrap around parts that link on her forearms. It’s a nice touch and conveys her conjuring her hex powers. 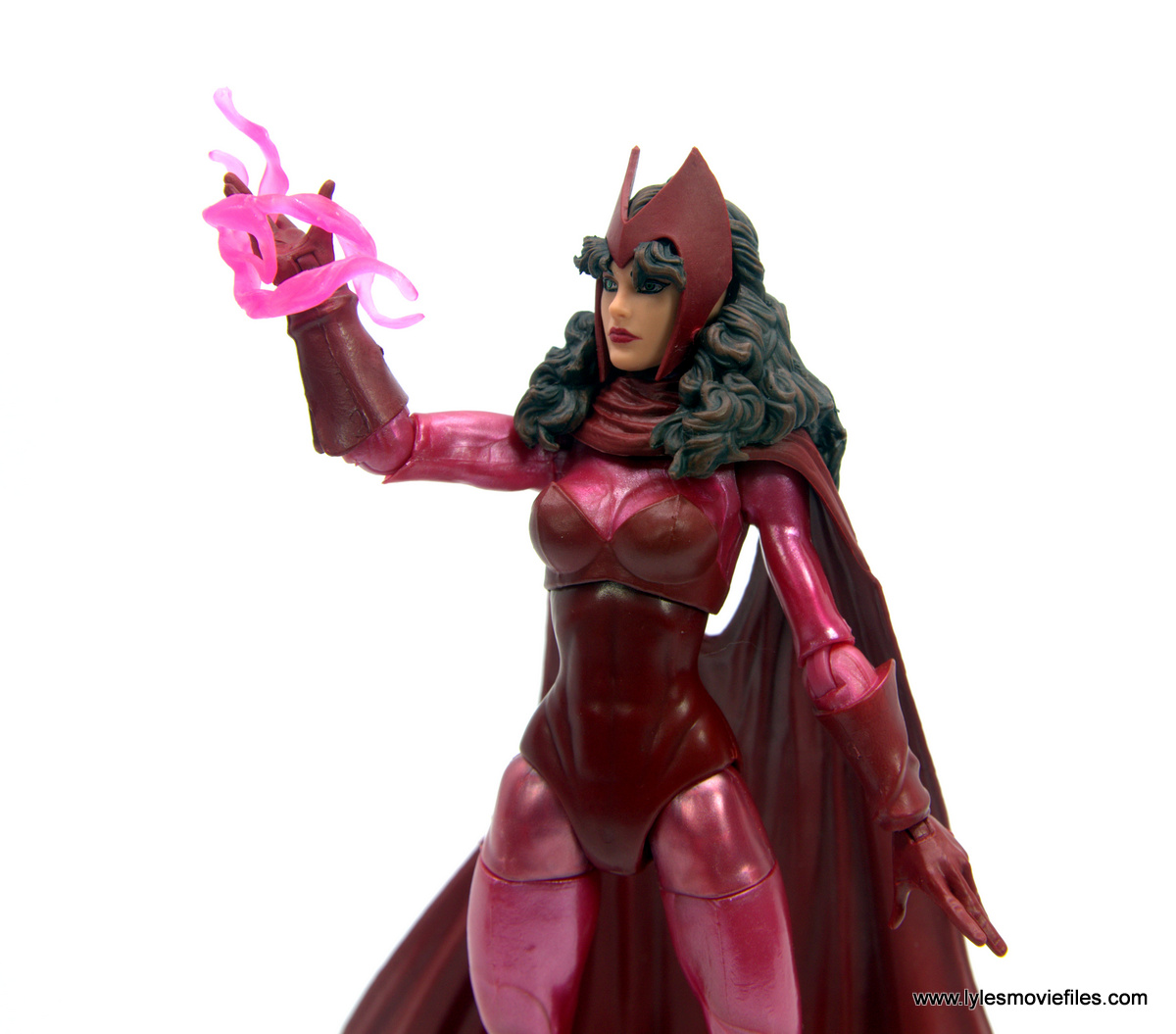 Worth it?  This set runs $60 exactly the price you’d pay for three regular Marvel Legends figures.  The rub here is there’s no Build A Figure parts, but this is basically what we get with Walgreens exclusives so it’s not a bad value from that perspective. Even at $55 I’d think this was a great deal to reflect just a little savings, but I don’t feel like this was an awful deal by any means. 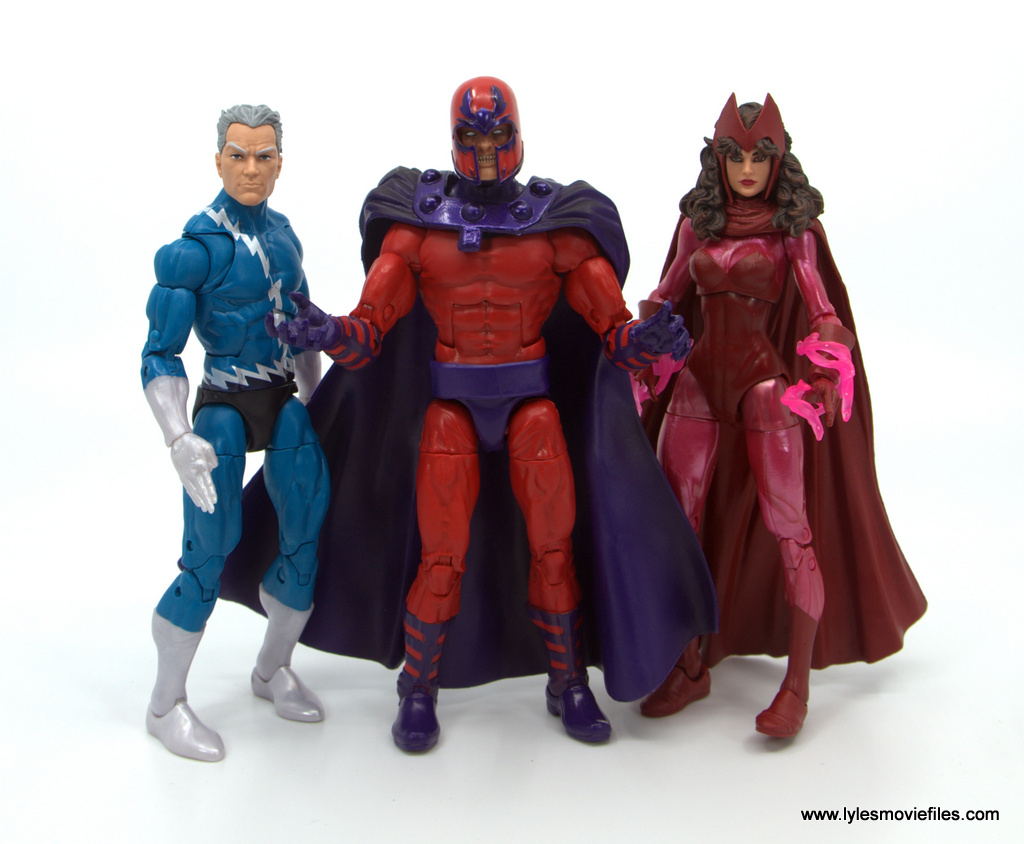 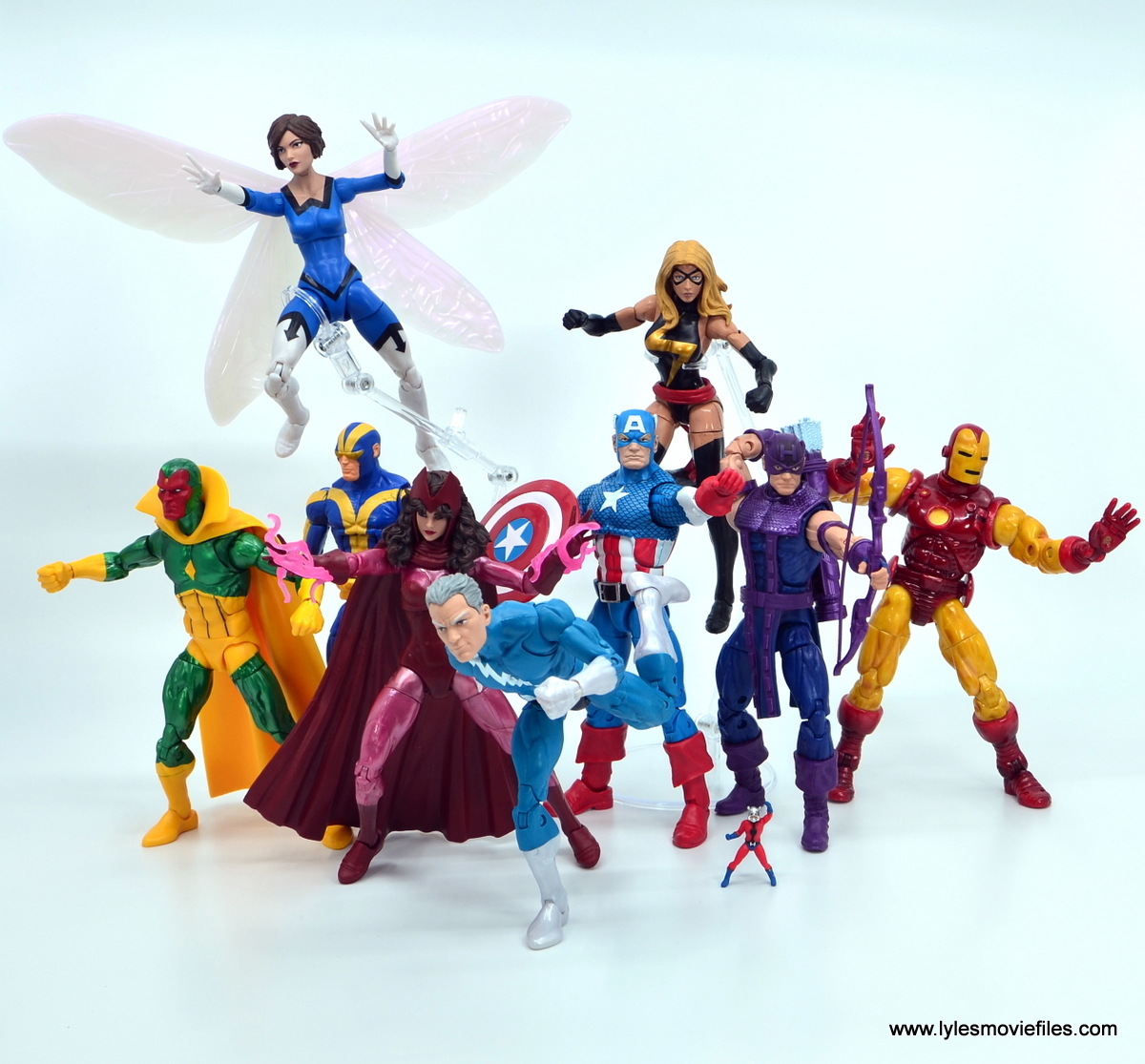 Where to get it?  I think this is solely an Amazon exclusive and since they’ve got it in stock, there’s no reason to mess around with other options.