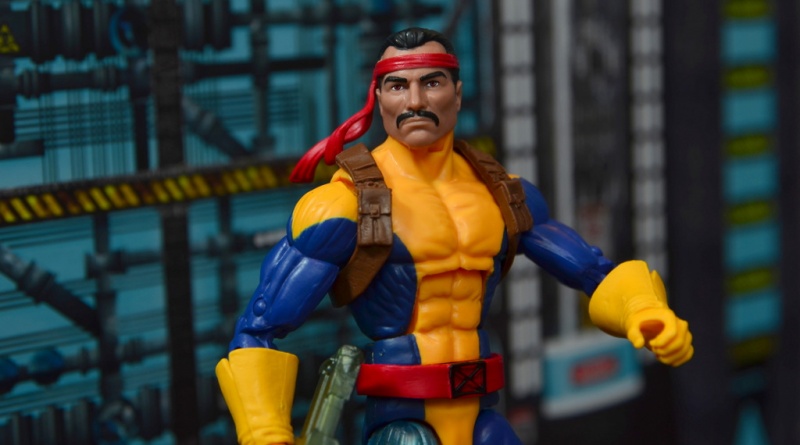 I’ve always found Forge a fascinating character. He’s a weapon maker/tech whiz, which doesn’t sound like the most impressive mutant power, but it comes in handy — especially if your girlfriend channels lightning in her sleep.

With Hasbro setting its sights on completing the 90s era team, Forge seemed pretty likely for his moment in the spotlight. Though he got slighted in the cartoon, Forge was a pretty important character in both Uncanny X-Men and X-Factor so I’m thrilled to add him to my collection.

Packaging:  The problem with writing 50+ Marvel Legends reviews in the span of four months? There’s only so many ways to talk about the packaging.

Though I love the yellow accent chosen for the X-Men line as that’s “their” uniform color in the MCU, much like the Fantastic Four has blue locked down. I can’t place the artist who drew Forge — maybe Ken Lashley? And this bio explains all we need to know about Forge and bonus(!) his team affiliation as well. 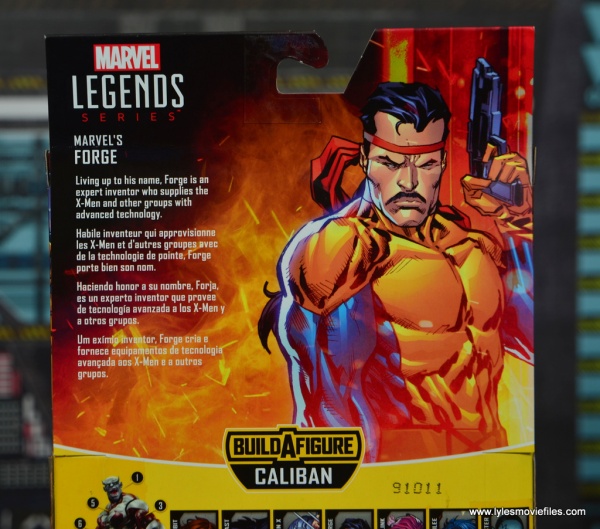 Likeness:  Forge’s most iconic look is his repurposed team suit with the familiar yellow and blues.

Hasbro added a holster instead of the leg strap Forge used to break his visible metal thigh and the rest of his leg. You can throw one of the Cyclops leg straps from the upcoming Wolverine, Jean Grey and Cyclops three-pack onto Forge for a more accurate look. 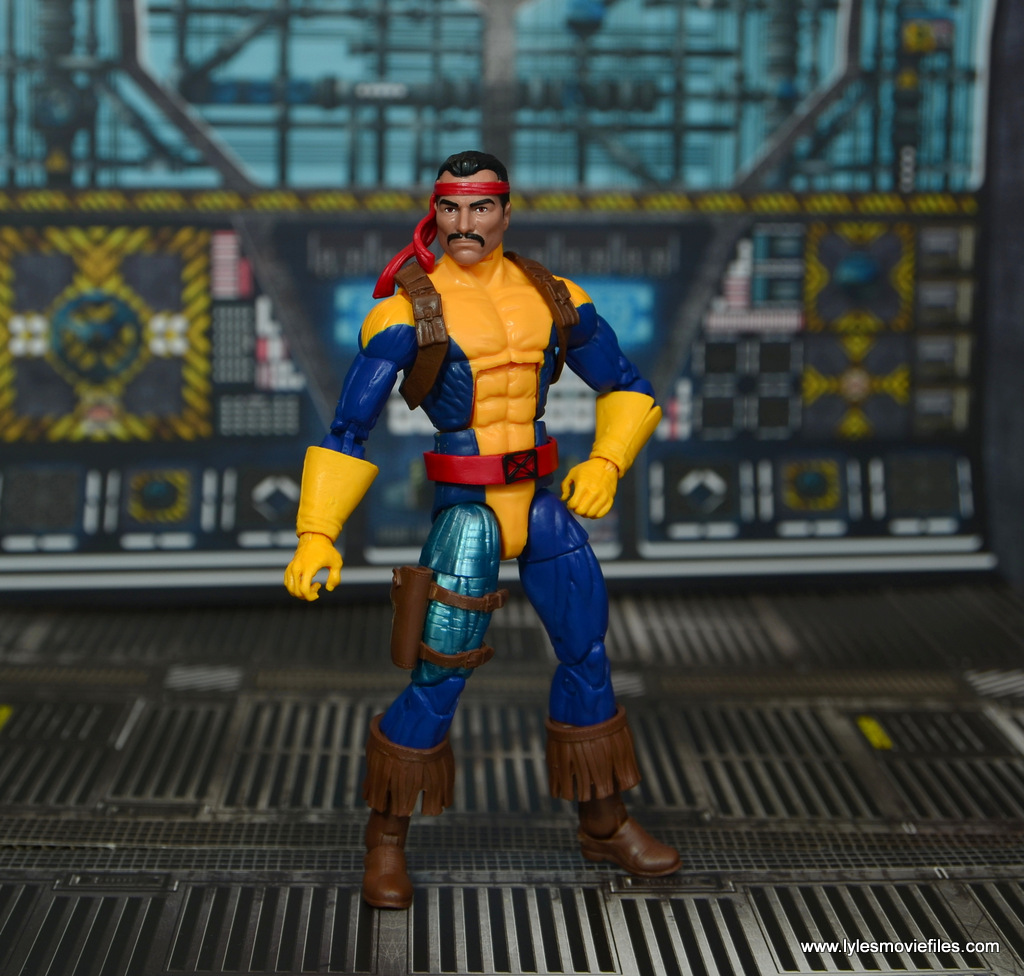 Of course there are also some images with the holster on the right side like this figure. It must be a maddening for Hasbro at time to decide on the definitive look. The consistent element of the outfit is the shoulder straps, which gives Forge a classic GI Joe appearance. Hey Hasbro, you’re indirectly creating all the parts you need for a 6-inch GI Joe line. Just saying… 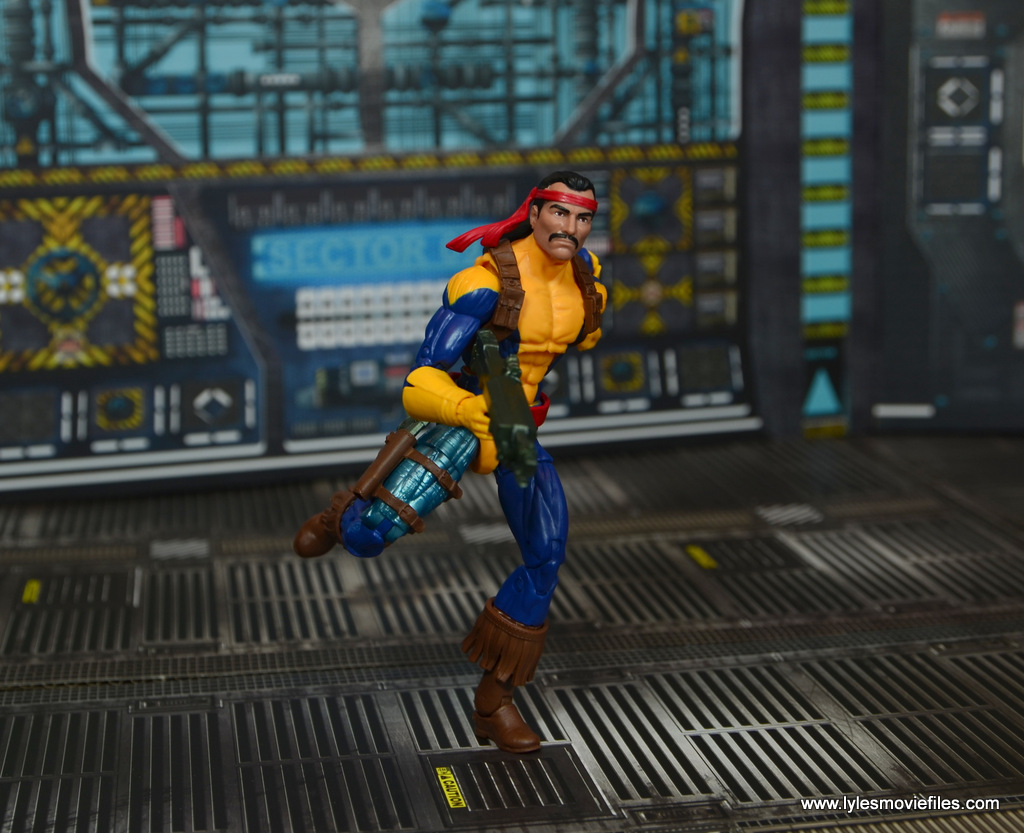 I like the job on the tassels on Forge’s boots. That’s something Mattel never can quite get right, but Hasbro has a much more authentic look. Make sure to have the super glue handy as they fall down if you look at them sideways. The belt also has a serious case of the dropsies so you might want to apply a little glue there as well — just be mindful of the waist joint. 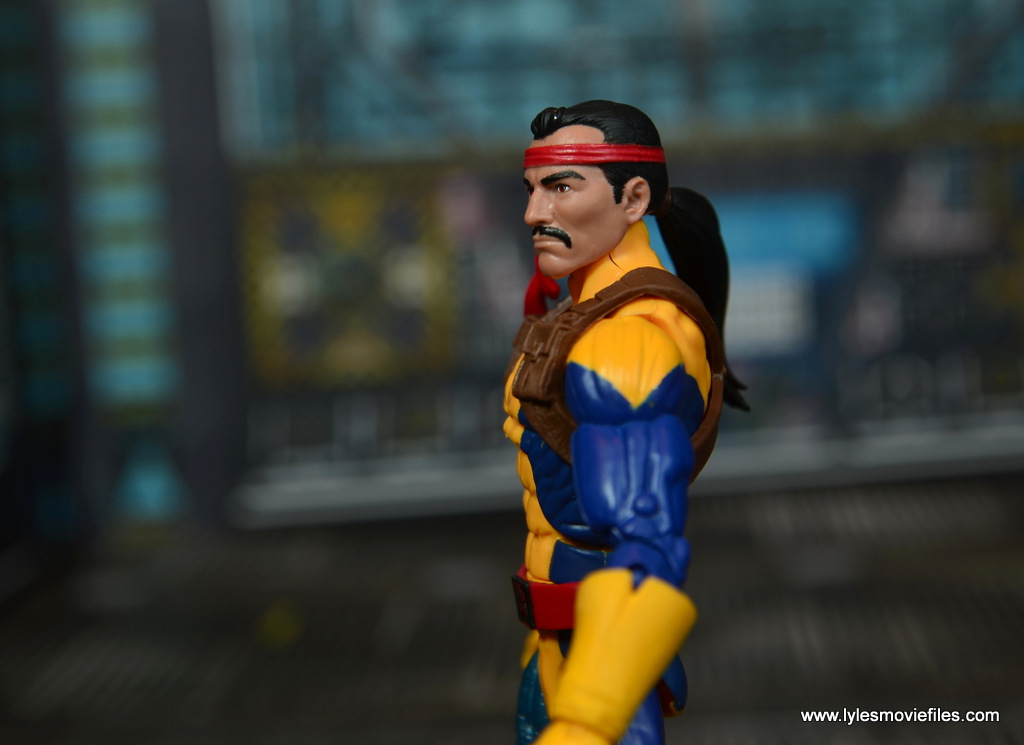 Forge’s head sculpt is great as it captures his focused demeanor. I love the flow of his headband as well as it won’t mess with any movement and hands naturally.

Paint:  I still don’t think Hasbro has the right shade of yellow yet. It’s still more orange yellow than flat yellow, which would pop better against the darker blue.

As an American Indian, Forge should have a darker skin tone and Hasbro did a nice job there. I had a few spots on the waist and left glove. Nothing major, but it’s a little frustrating all the same.

I wish Hasbro threw a wash on Forge’s metallic thigh. The blue material is better than flat grey, but just barely. 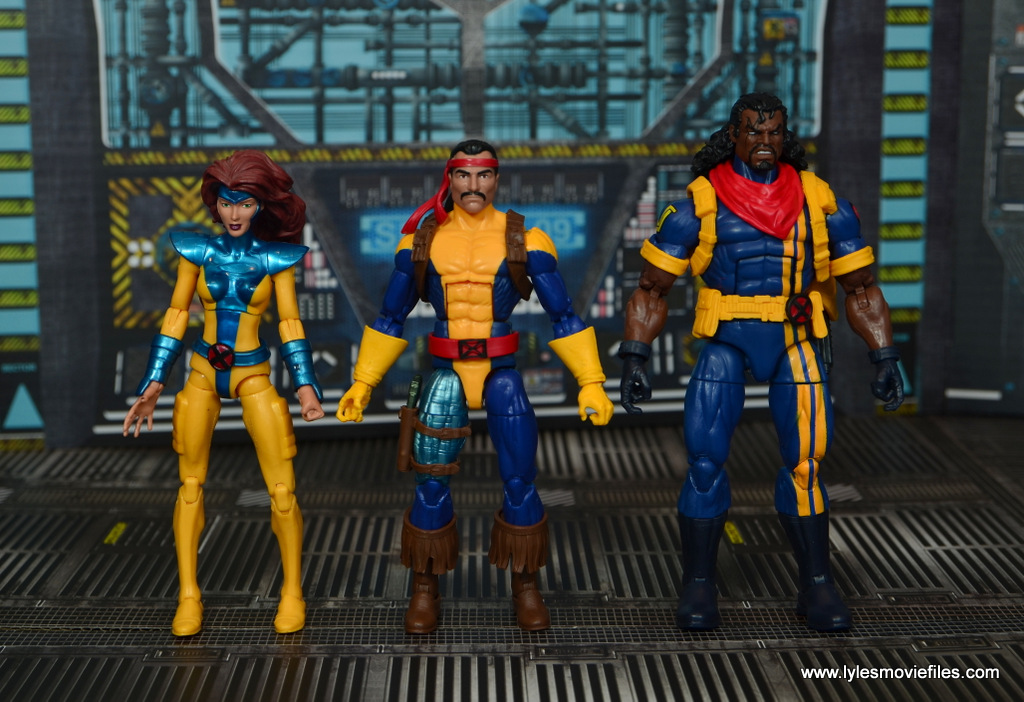 Scale:  Forge is a regular size guy and this buck matched up well with his height. He shouldn’t be the tallest X-Man by any means and he fits in well with the rest of the gold team. 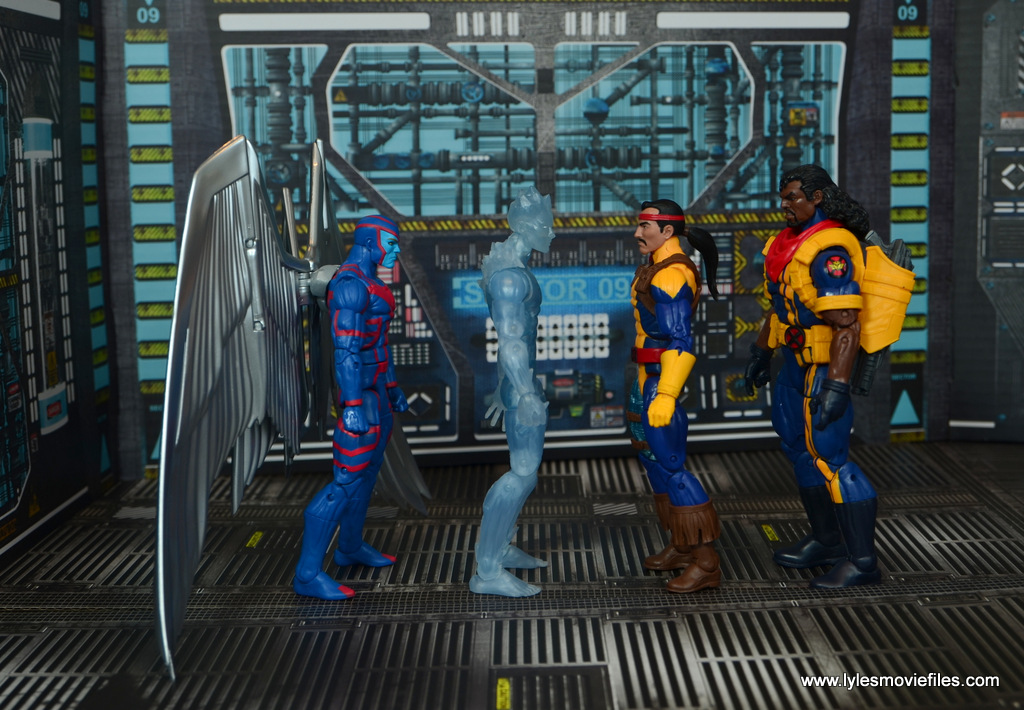 Articulation:  Forge has the basic Bucky Cap body so you have a good idea of his movement style. It fits just fine with Forge since he’s more of a sitting or aiming kind of character. My figure had a seriously floppy torso joint making posing him a little frustrating. Hopefully that’s not a consistent problem with this figure. 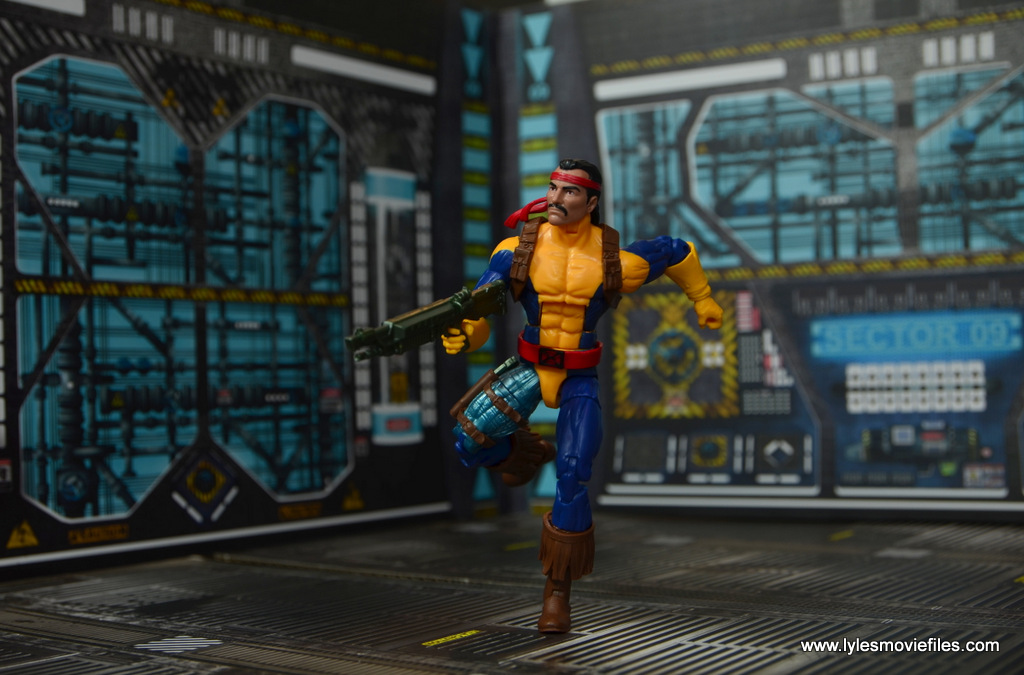 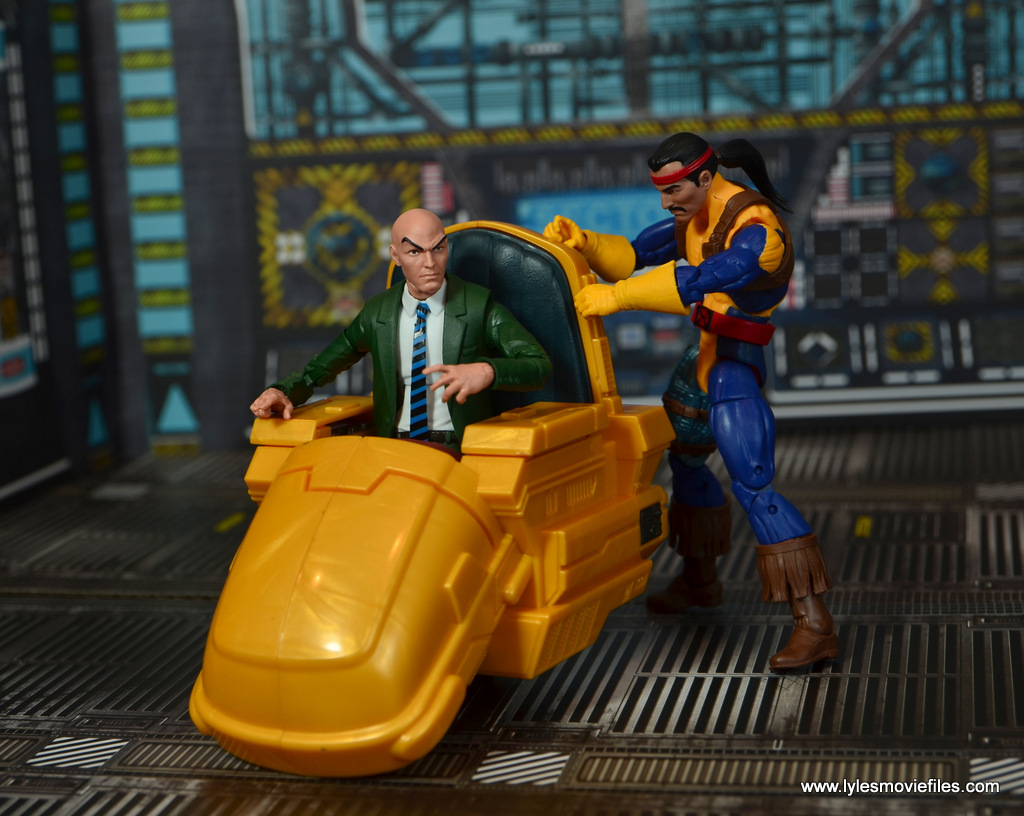 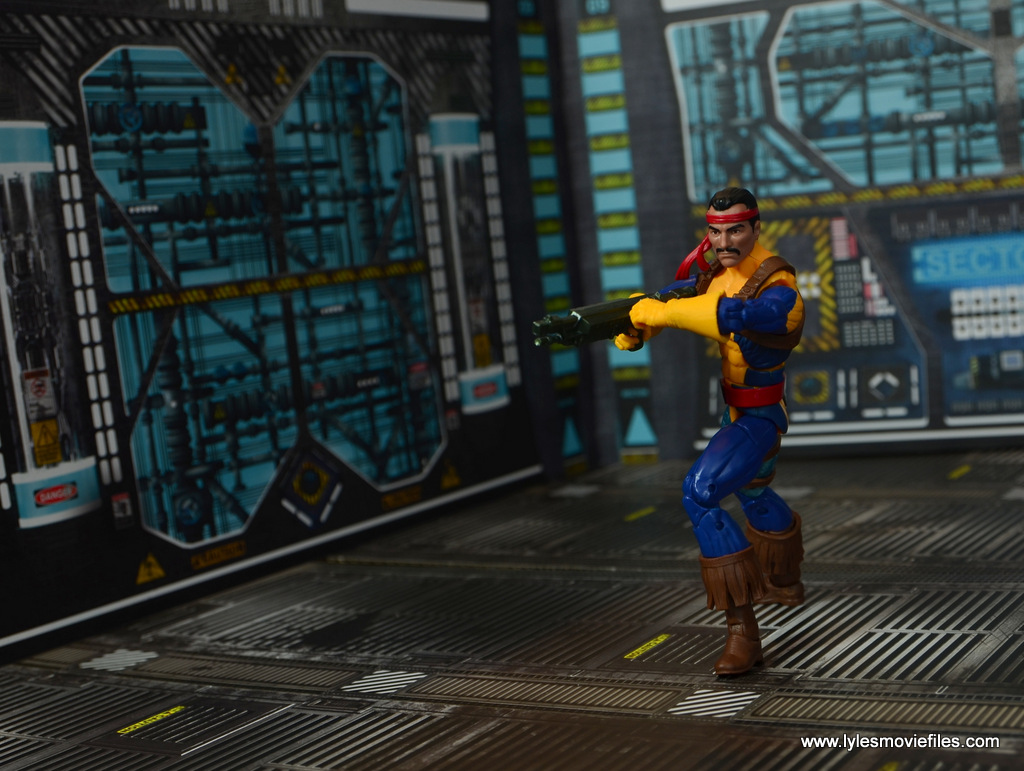 Accessories:  I’ve seen a lot of people slap on a variety of extra accessories to beef up Forge’s arsenal. Can’t argue with those choices since he can never have too many weapons. What Hasbro did provide isn’t bad however. 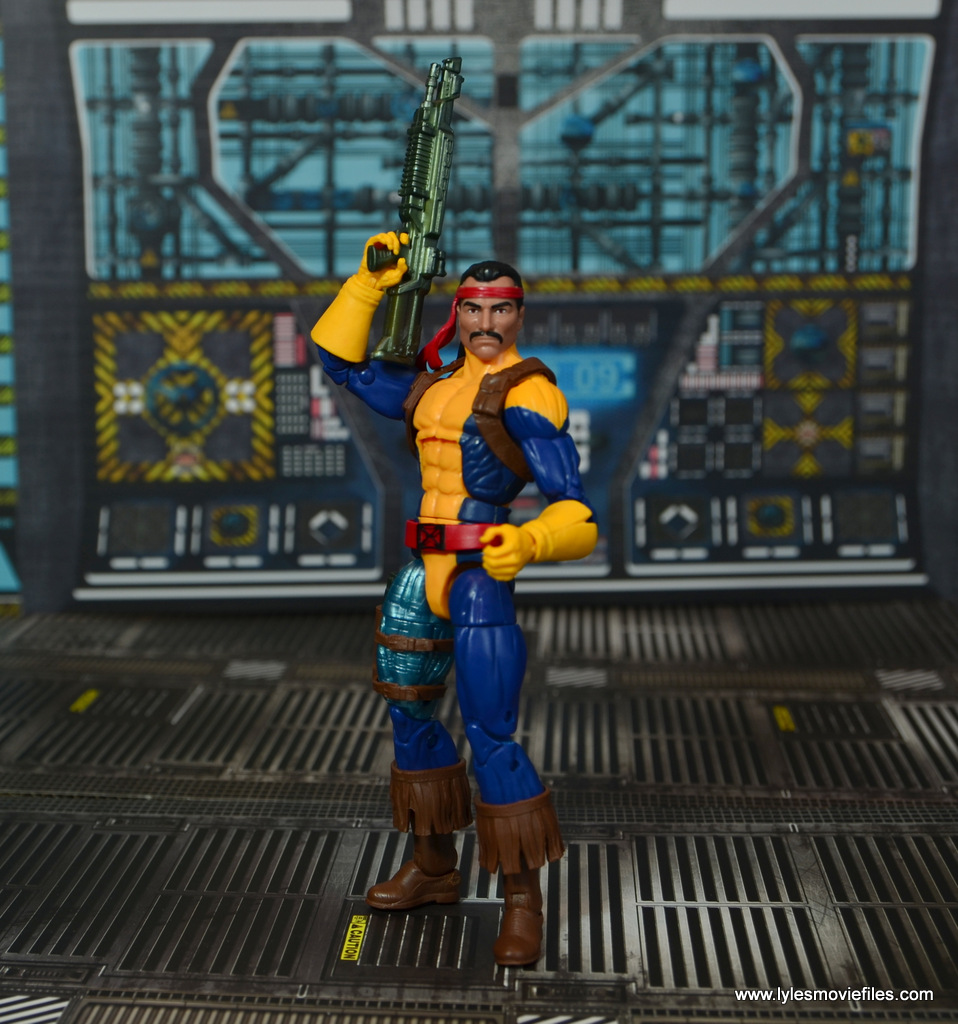 We get a larger scale blaster/machine gun looking gun and a smaller pistol that fits in the holster. I wouldn’t have been upset if Hasbro threw in some more exotic weapons fitting a weapons maker, but these will do. 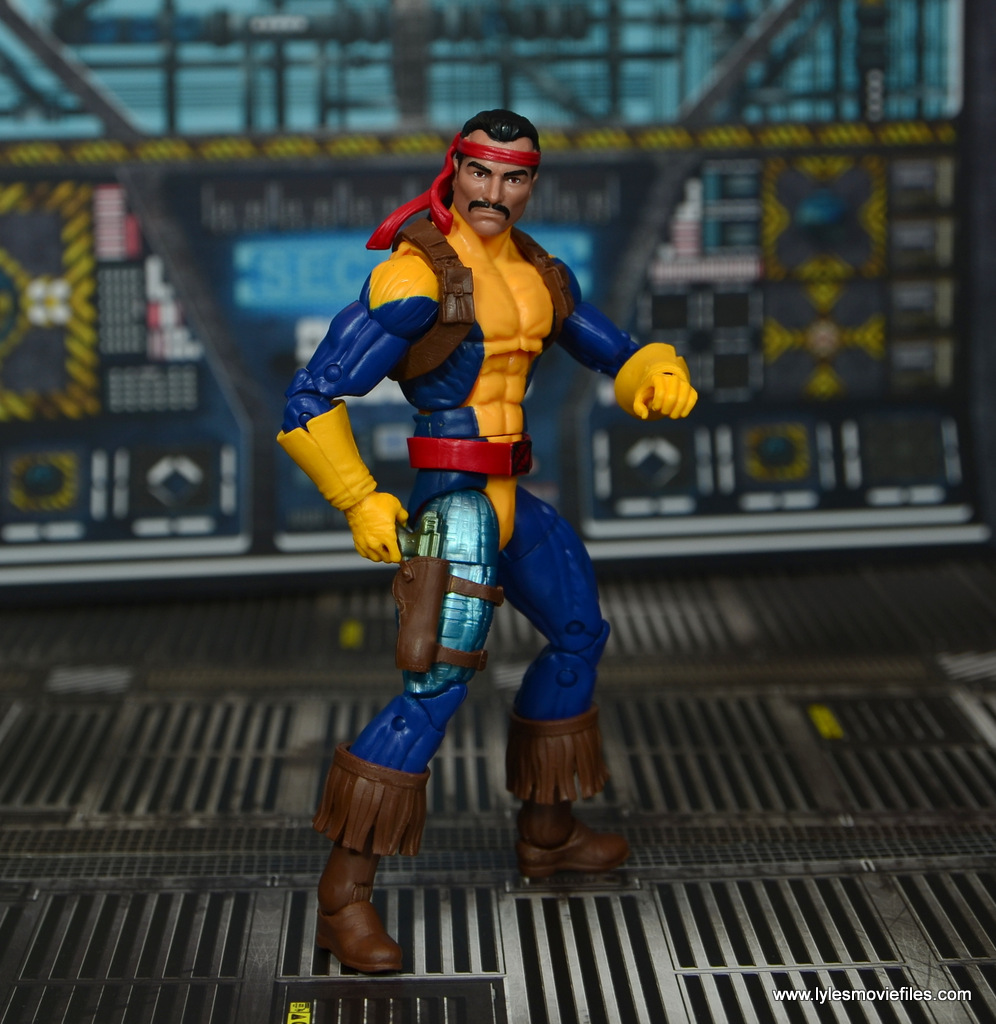 Finally, Forge comes with the left arm of the Build a Figure Caliban. 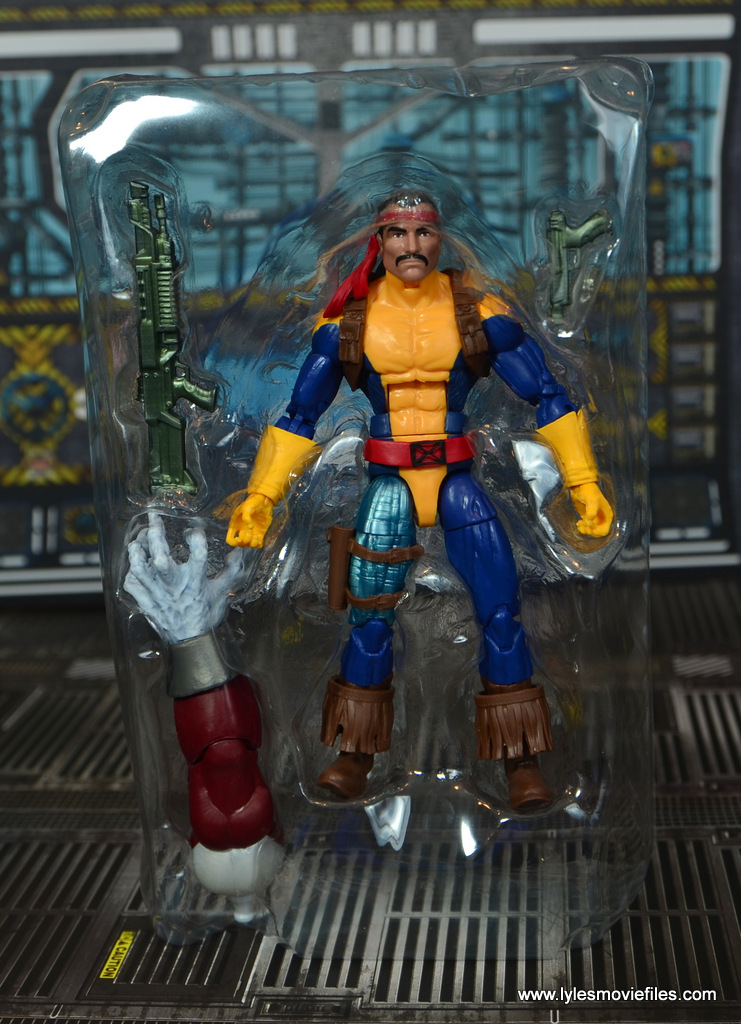 Worth it?  Forge isn’t the blow away amazing offering in this wave like Jubilee, Beast or Gambit, but this is a great execution of an important X-character. 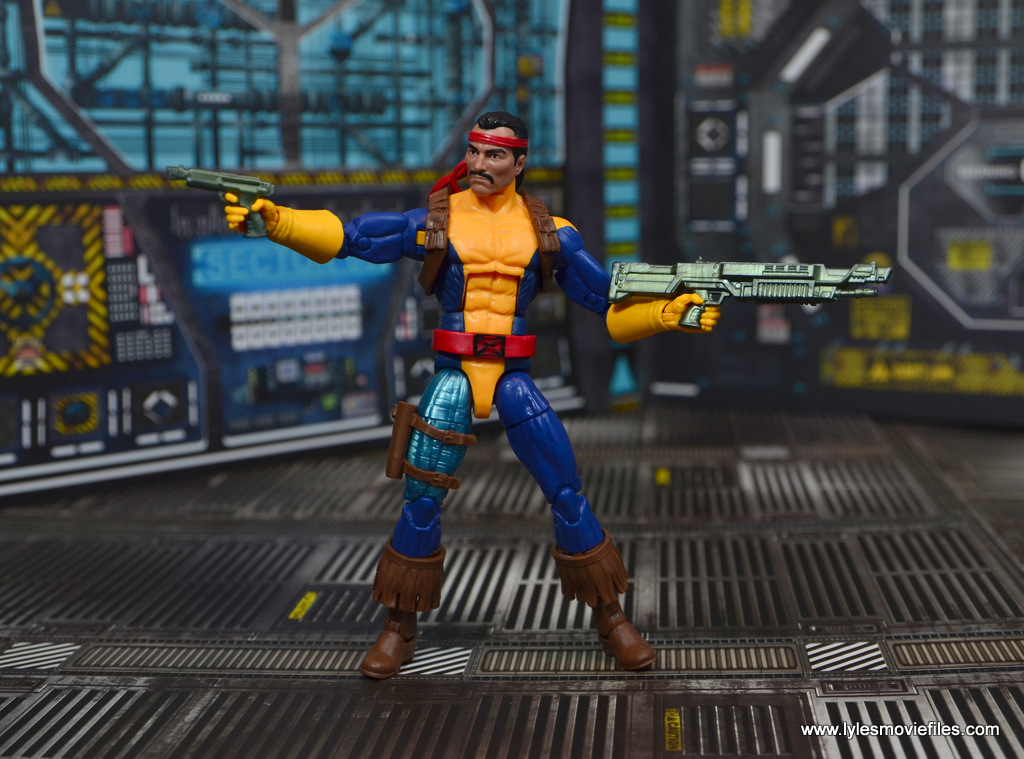 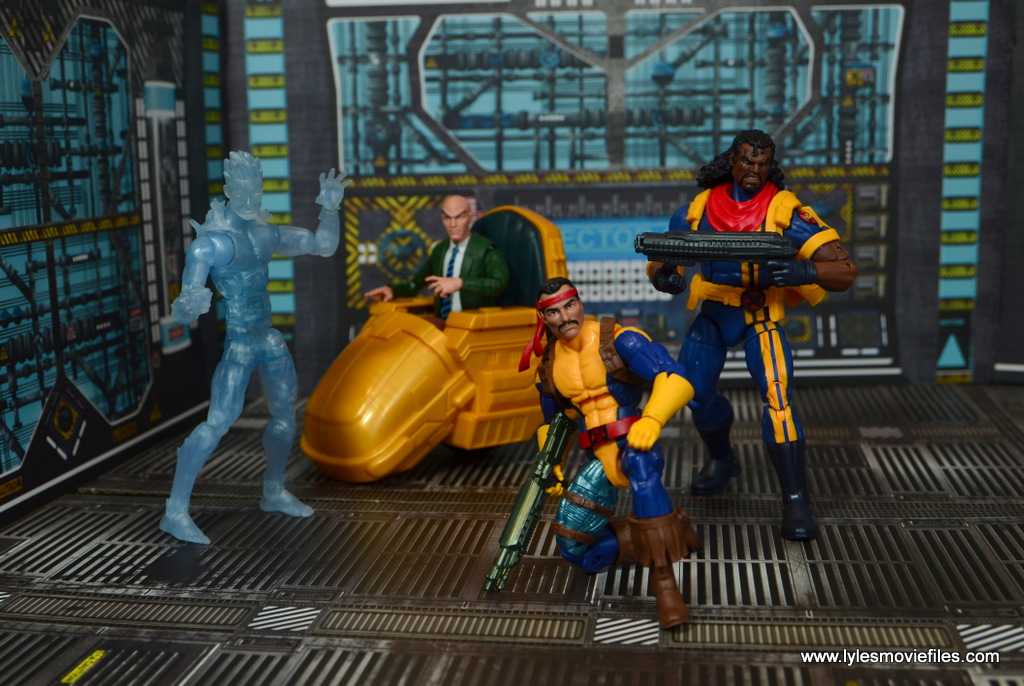 Where to get it?  Since people are using Forge for Morph and other team uniform customs, he’s harder to find than some of his wave mates. Try Target and GameStop for this wave or you can go the Amazon or Hasbro Pulse path too.