Hollywood has made a ton of money off a slew of films where grown men acted like teenage frat boys or movies where teen boys acted like teen boys. So why can’t tween boys get in on the fun (and the money)? To its credit, Good Boys takes its one-note joke far further than you might think possible.

That’s impressive considering the film lives and dies on a trio of seventh-graders cursing a blue streak and displaying a charming clueless attitude about sex toys. Clearly these tweens don’t exist in a world without Wi-Fi.

Of his crew — The Beanbag Boys — Max (Jacob Tremblay, Room) is clearly the coolest. He’s got enough street cred with his classmates to get invited to the cool kids’ party where he hopes to have his first kiss and naturally marry his crush, Brixlee (Millie Davis, Wonder). In a refreshing change, the cool crew mostly consist of Asian and black kids. 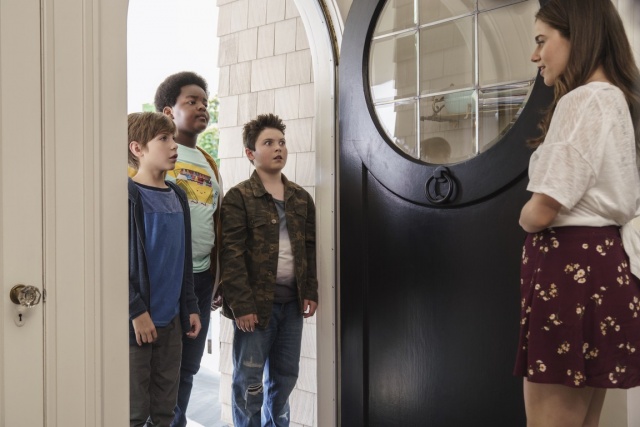 Max manages to get his buddies, Lucas (Keith L. Williams) and Thor (Brady Noon, Boardwalk Empire), an invite to the party, but beyond their general lack of coolness there’s a big problem — none of the Beanbag Boys know how to kiss. After a Google search goes horribly wrong the guys take the far more convoluted approach of using Max’s father’s drone to hopefully catch neighbor Hannah (Molly Gordon) kissing.

Not surprisingly, Hannah doesn’t respond well to being spied on and with help from her best friend, Lily (Midori Francis, Ocean’s Eight), holds on to the drone. Then Thor further complicates things by stealing Hannah’s purse, which just so happens to contain some Molly they planned to use for a wild night out.

Director/Co-Screenwriter Gene Stupnitsky and Lee Eisenberg (Bad Teacher) have a good sense on how to deliver big laughs. This style of comedy really only works with escalating ridiculous scenarios and Good Boys definitely delivers on that end. From selling a valuable game card to a creepy dude to racing along a highway, the craziness and laughs keep on coming almost through the film’s 85-minute run time. 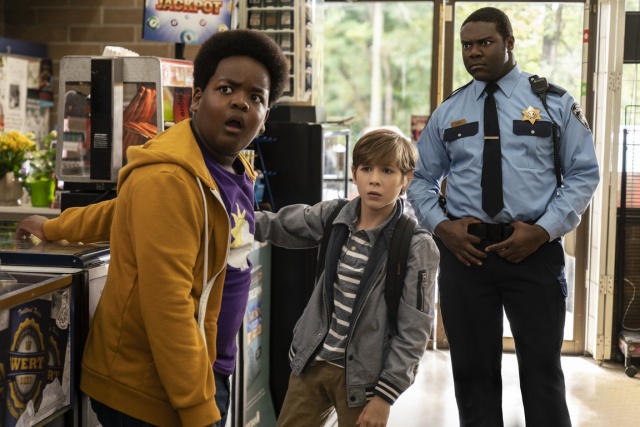 Stupnitsky and Eisenberg probably underestimate the ingenuity of tween boys and make them more naive to sex than seventh-graders probably are in 2019. A lot of the raunchier humor involves using sex toys in ways they weren’t intended. Less effective is the random cussing, which after the initial shock value of these little kids cussing wears off feels more like a script obligation than a benefit to the film.

The script actually plays up the boys’ innocence better such as the running joke of their failure to open child proof containers, their childlike mindset on the dangers of drugs and standing up to bullies. Lucas’ reaction to his parents’ separation is hilarious in large part to Williams playing up Lucas’ overly sensitive and honest mentality. Thor is also fun as his desperate desire to be cool keeps clashing with his real passion – singing. Tremblay, Williams and Noon have a great chemistry and carry scenes with weaker setups just on the strength of their bond.

Stupnitsky shows solid pacing and doesn’t let jokes or moments wear out their welcome before moving on to the next gag. Thankfully most of the best jokes weren’t spoiled by the trailers.

As with most of the raunchy comedies, Good Boys loses steam in the final act with the expected personality clashes that threatens to split The Beanbag Boys for good. The resolution pays off nicely though this was a film that was begging for a 20 years later glimpse at the guys reuniting. But maybe that end scene will be saved for the sequel? 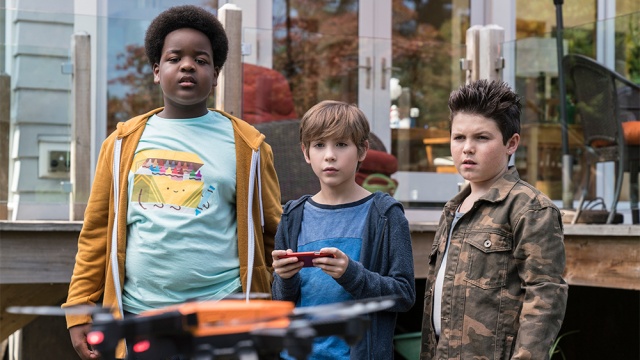 It might be good to be bad, but this trio proves it’s fine to walk on the wild side of being a good boy too.