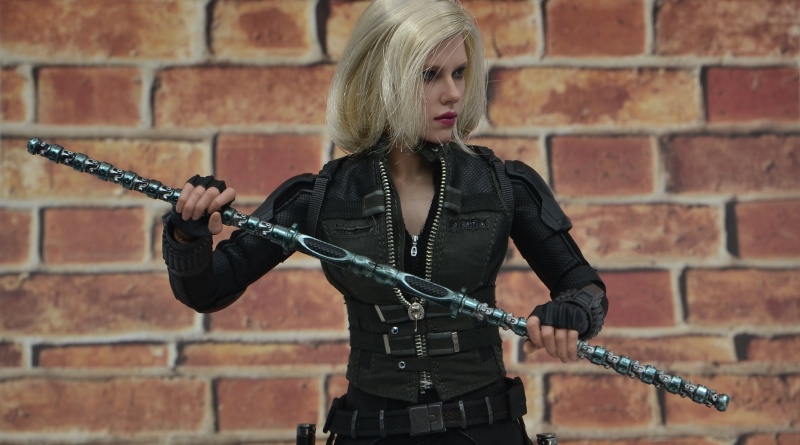 I’ve gotten so backlogged with the onslaught of Marvel Legends figures it’s having a trickle down effect on my other collections namely my Hot Toys figures. Avengers: Endgame is all the rage these days, but Avengers: Infinity War was a pretty amazing film as well. Somewhere along the MCU Phase 2 and 3, Black Widow became one of my favorite characters and I’ve ended up getting more of her figures than I expect.

The Hot Toys Avengers: Infinity War Black Widow at least sports a drastically different look from previous figures thanks to the blonde dye job and green tactical vest to mix things up a bit. Since I’m apparently going to have a comprehensive Infinity War shelf, I definitely needed to have this version of Natasha. And after a lengthy stint on the to-review pile, it was time to break her out. Let’s see how this one turned out.

Packaging:  I really like the Avengers: Infinity War packaging with the drawing of the character and the galactic background. Black Widow has a green color scheme, which mixes up the presentation if you want to arrange them side by side. 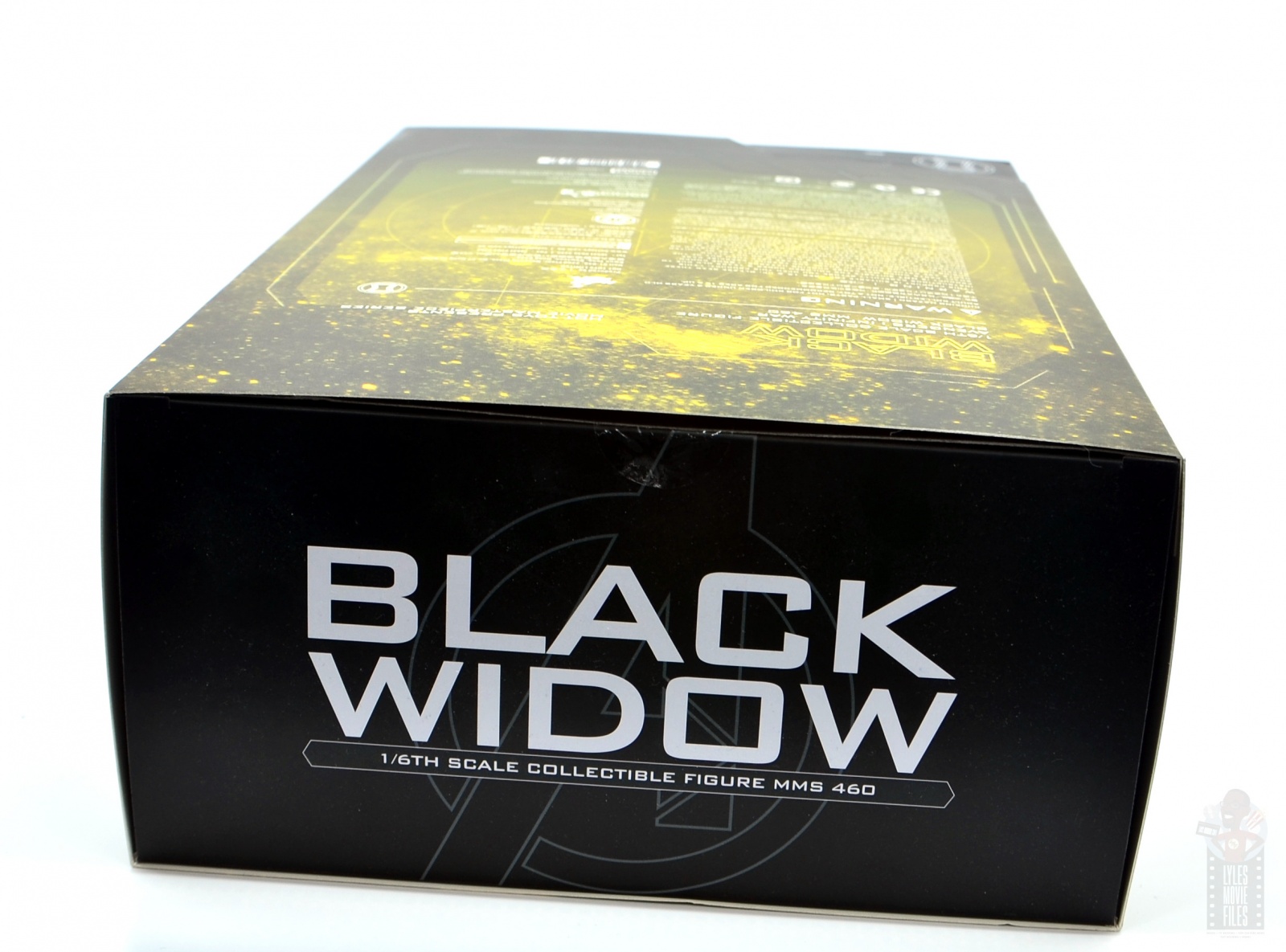 I dig the cut out section at the bottom for whatever reason as it doesn’t do anything besides looking cool. 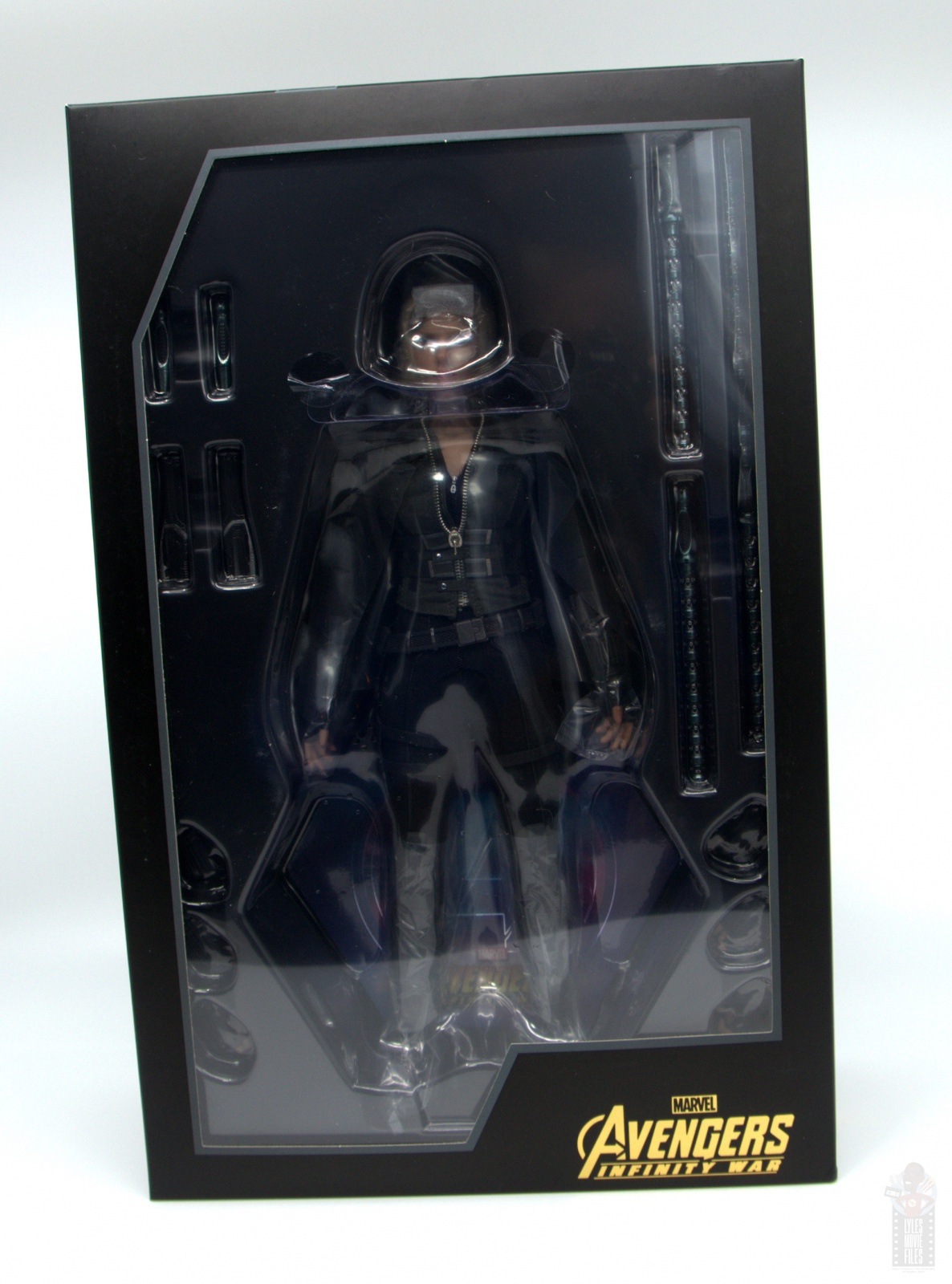 Slide that off and you’ll see the figure and accessories in the gold embossed inner packaging. 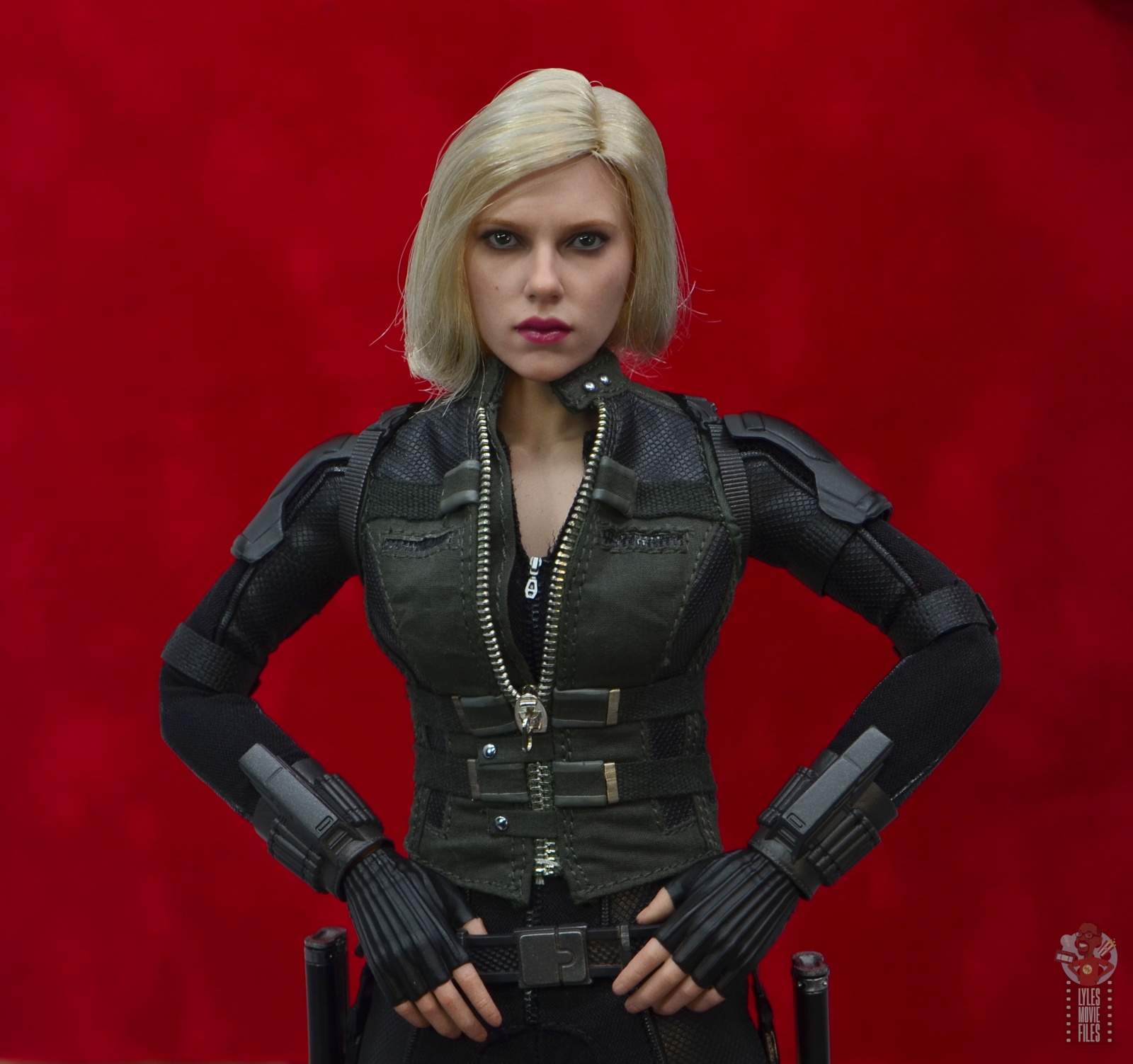 Likeness:  Hot Toys opted for rooted hair for this figure, which I don’t think is as effective since it doesn’t quite flow like it did in the movie. In terms of the likeness to Scarlet Johansson, this is now the standard although the Avengers: Endgame version could be a real challenger.

The hair though was a real issue this time as it’s all over the place and is a mess. It’s bushy, frayed and impossible to manage. Clearly I’m gonna have to figure out the hair styling techniques some of the other Hot Toys collectors have managed. 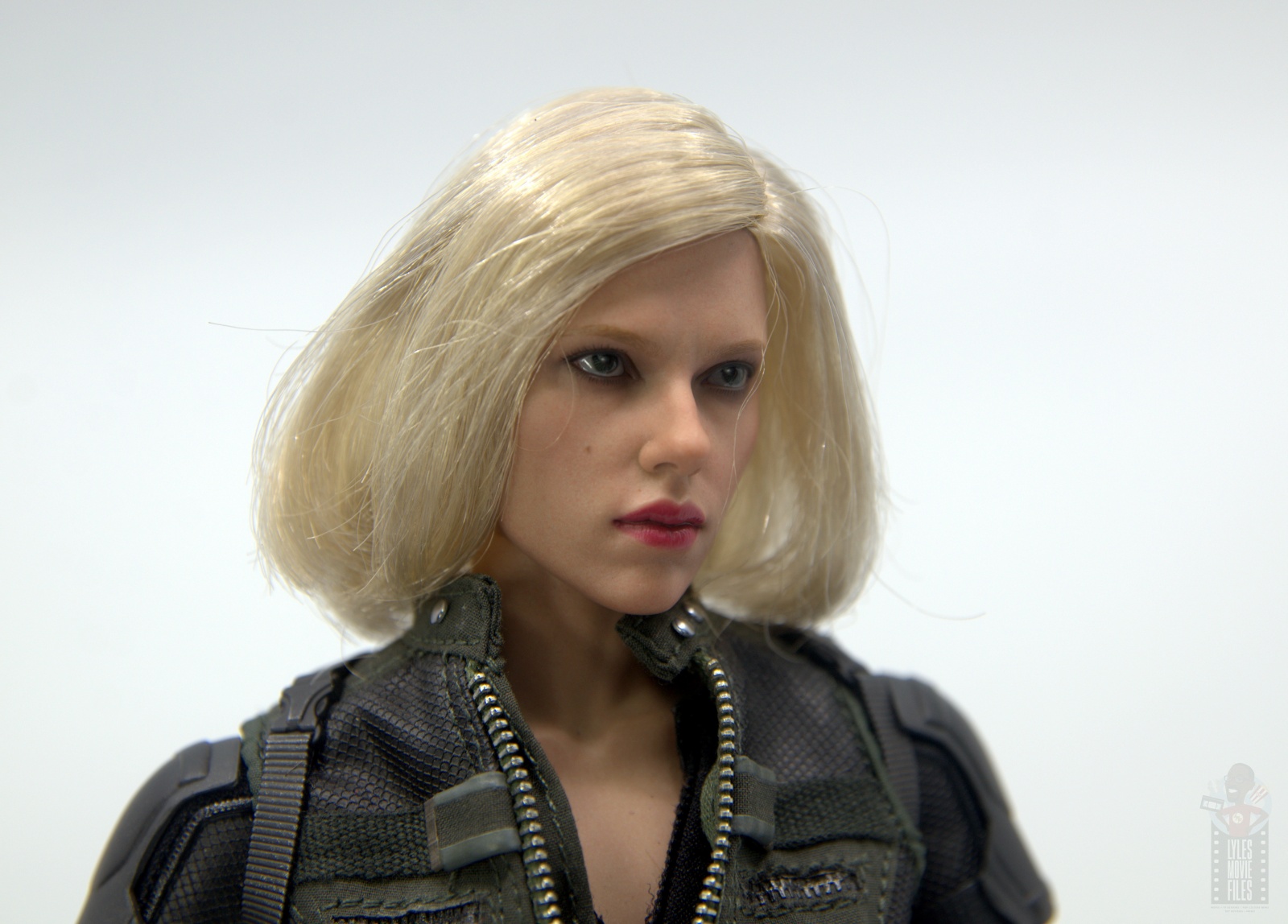 I’ve seen some collectors have done some great work on the hair, but it’s annoying having to pay for a $200+ figure and still have to do a major alteration.

Hot Toys keeps improving on their likenesses of actors and this really has the small details that capture Johansson’s looks. 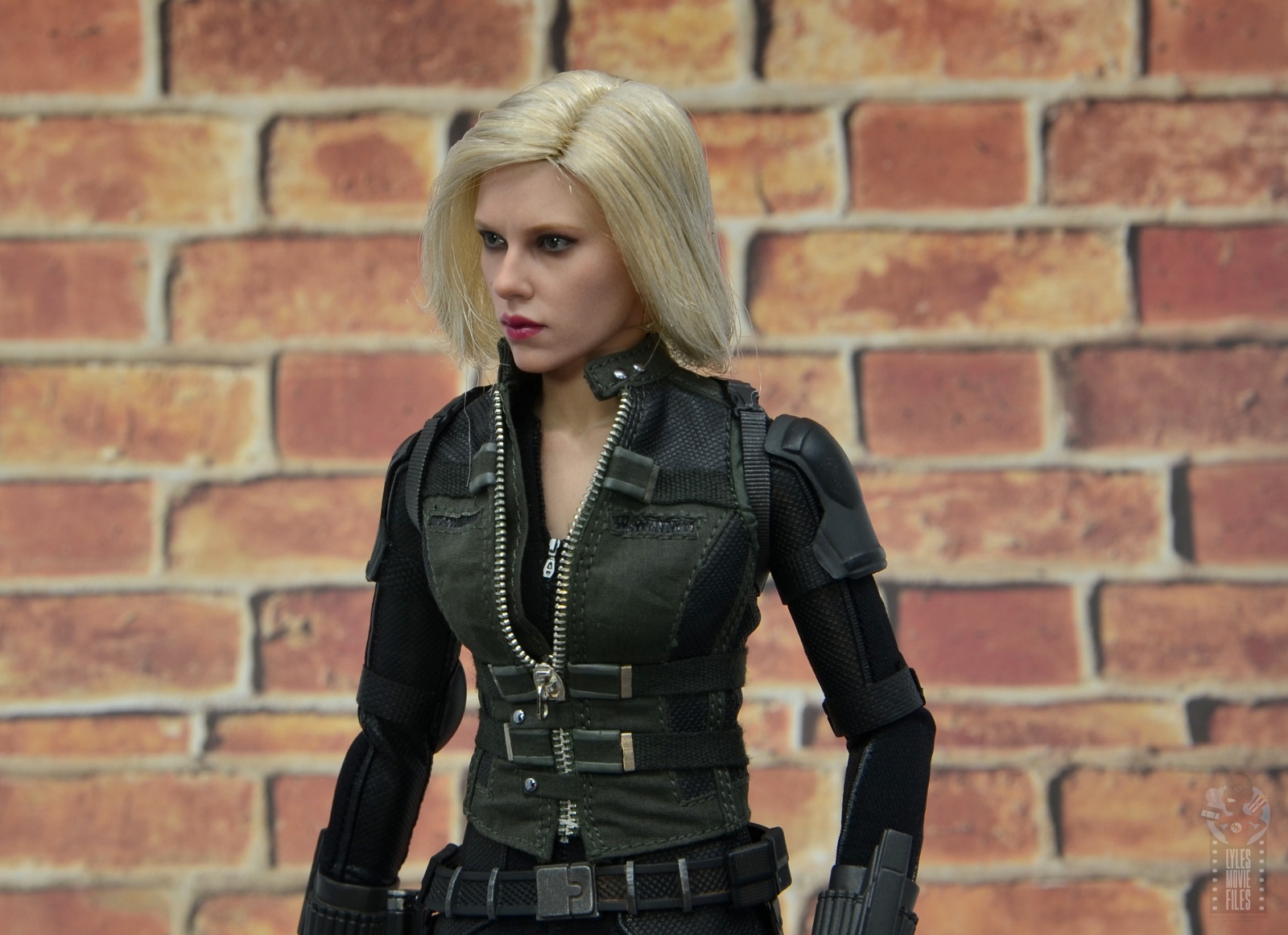 It’s one thing to make a figure look like the actor and it’s another to capture an attractive actor/actresses’ likeness. This one is incredible. I really wish Hot Toys just sculpted the hair here as this would have been the ultimate Black Widow likeness. 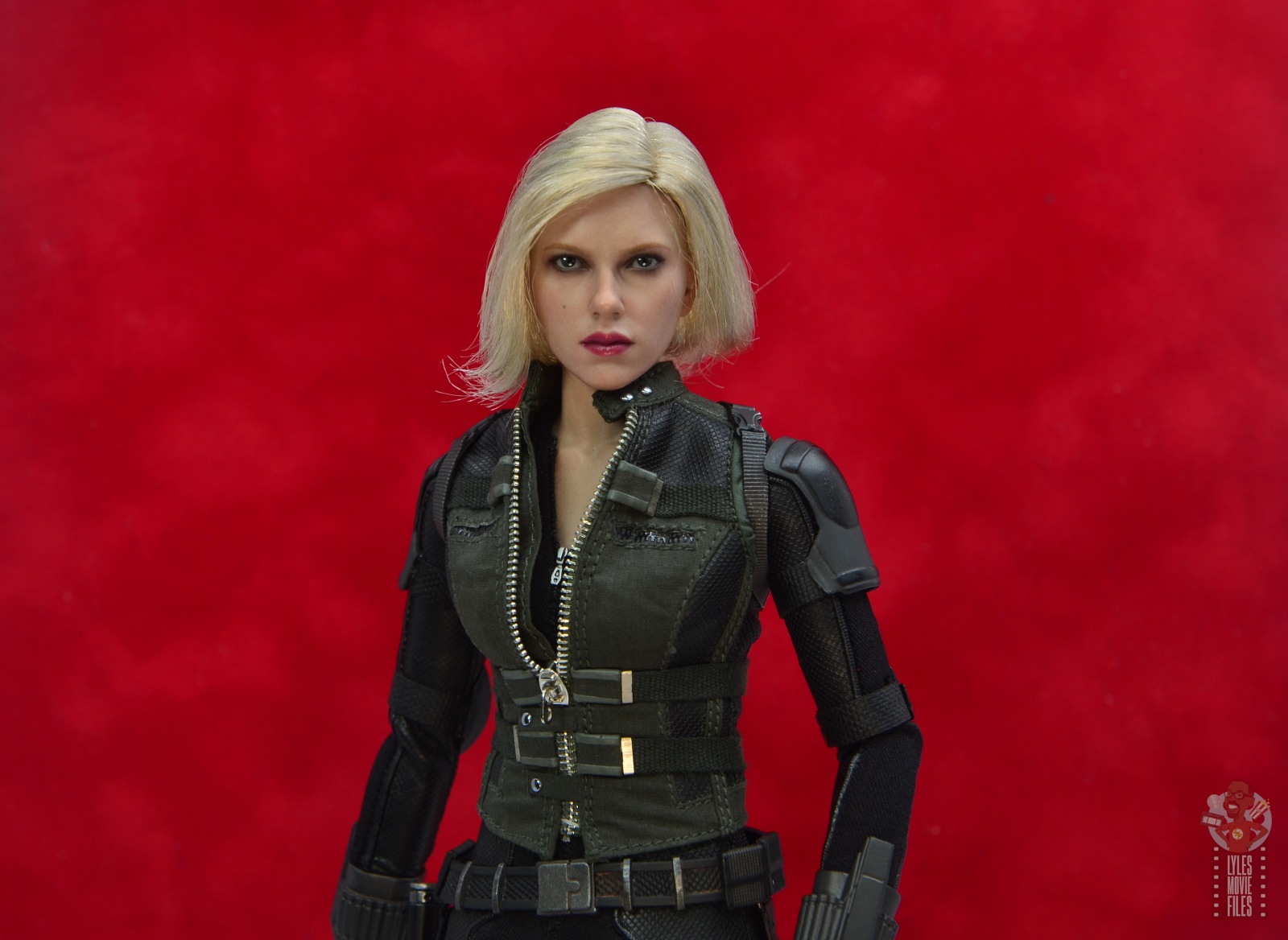 Scale:  This version of Black Widow is slightly shorter than my Avengers: Age of Ultron figure, which I’ll chalk up to a higher heel in the boots. 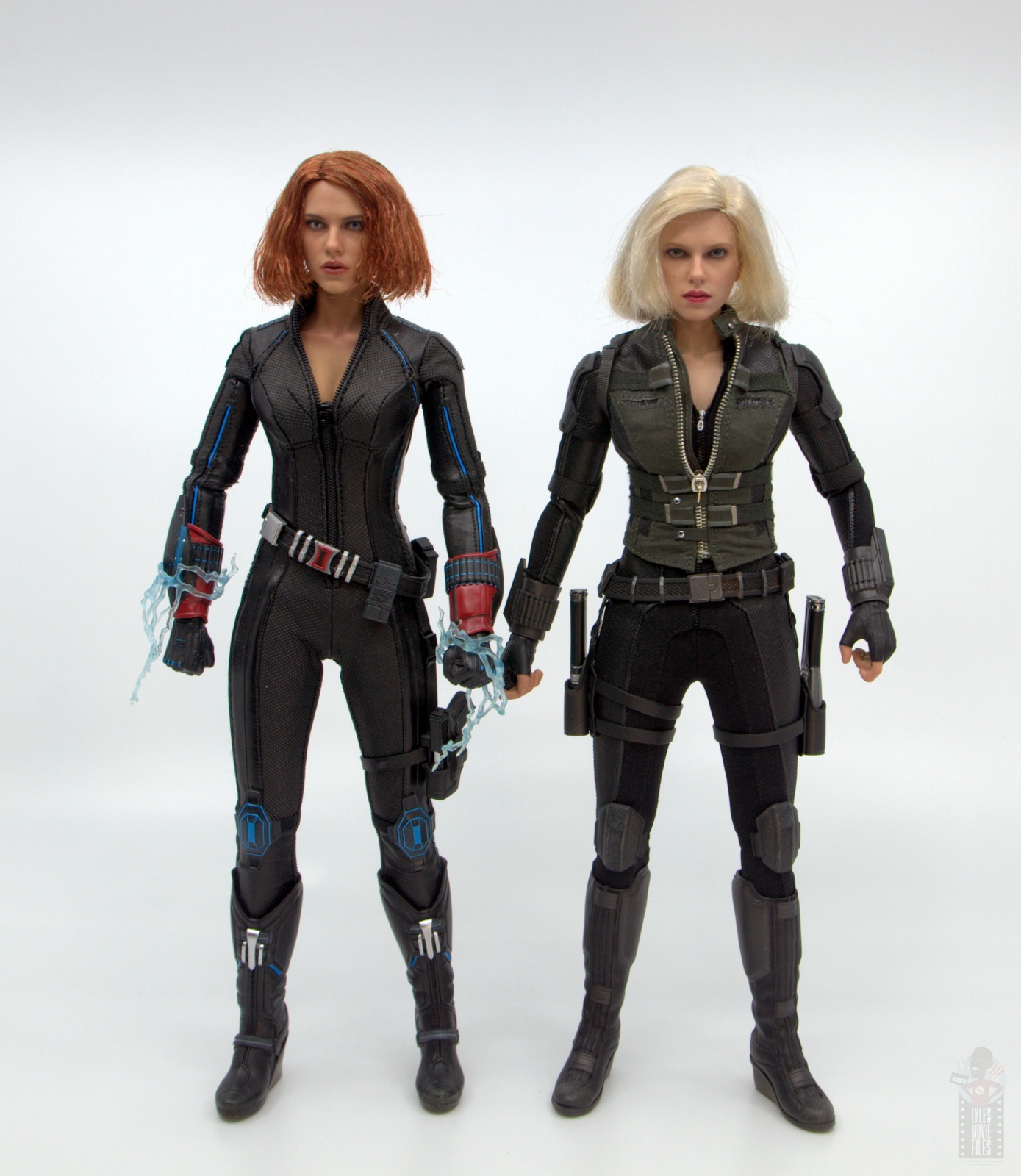 She also stands shorter, as she should, next to the guys like Captain America, Falcon and Black Panther. 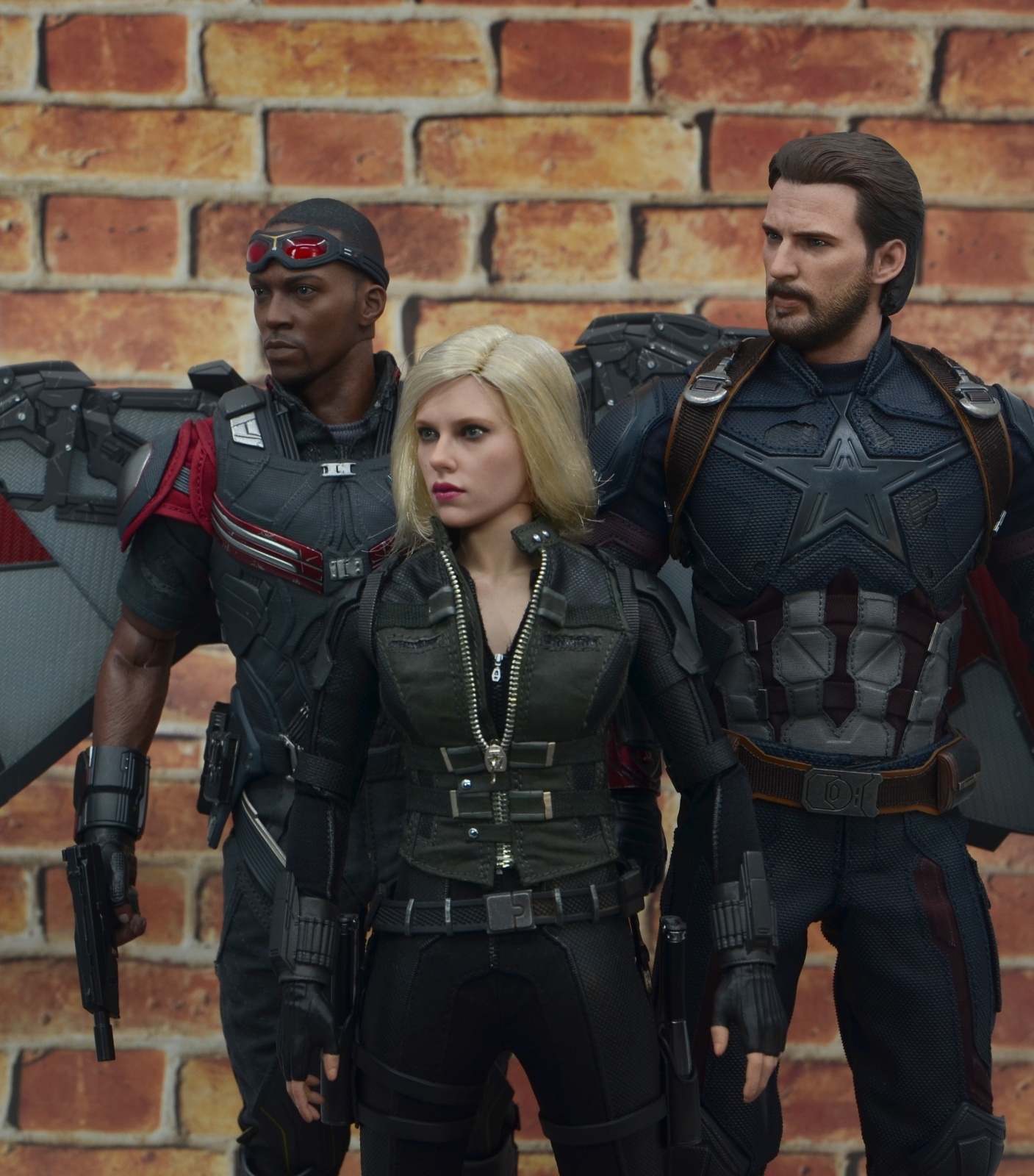 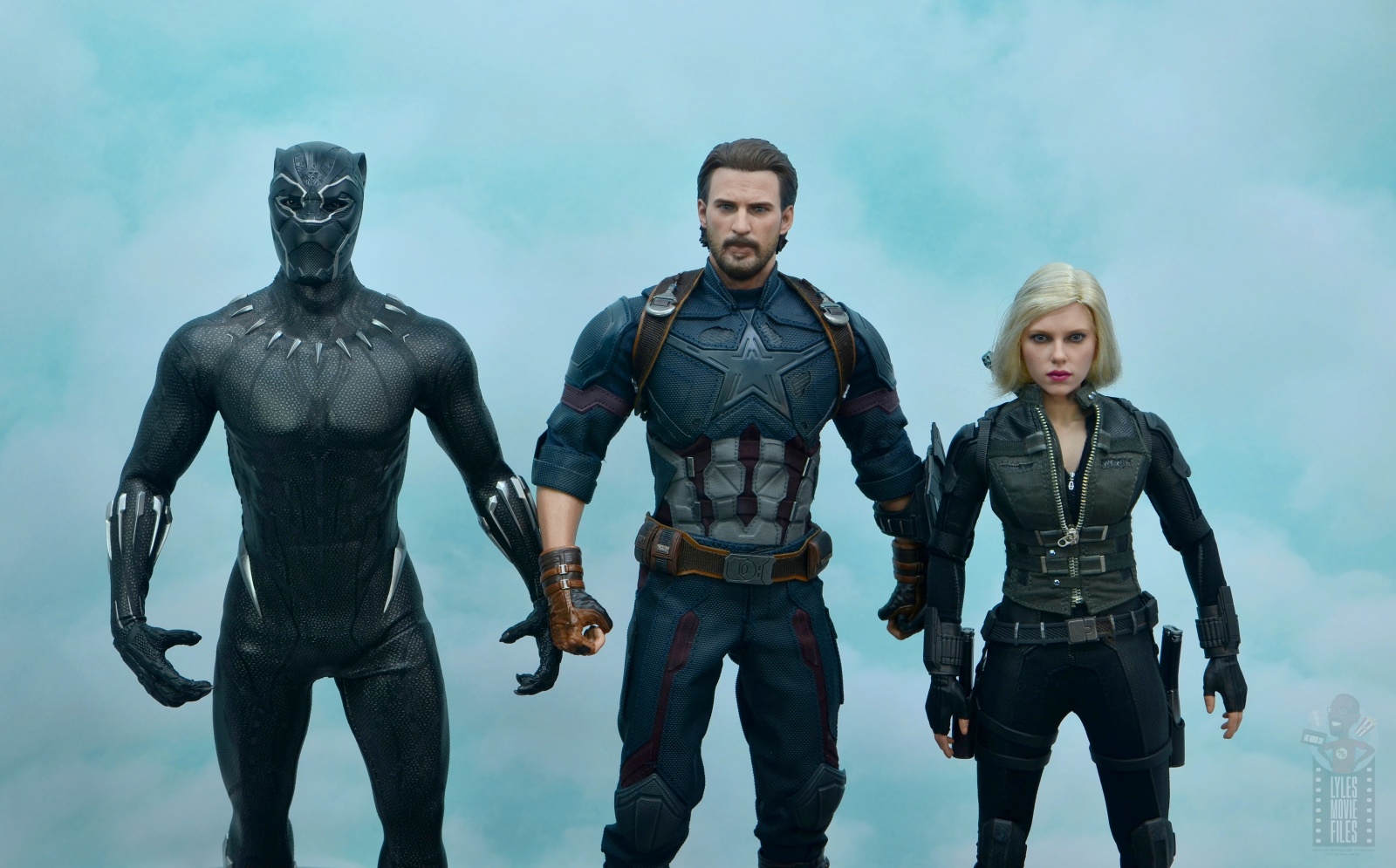 Paint:  What really continues to set Hot Toys apart from its peers is the realistic paint job. That’s evident with the skin tone variations — people’s faces aren’t one flat color — and the lifelike nature of the eyes.

I wish Hot Toys added some variation to Black Widow’s hair. It’s not a platinum blonde consistency as there’s some darker roots evident throughout. Some traces of brown would have gone a long way to making the hair more natural, which is something Hot Toys likely would have done if the hair was plastic instead of rooted.

Uniform:  This is essentially the Civil War outfit with a few alterations. The biggest is the green tactical vest. It’s a military style vest with lots of buckles and a zipper. The scaling on the zipper seems perfect to my eyes while still being functional.

I like the look of the outfit as it captures enough standard Black Widow, but the vest helps it to stand out just enough. The figure’s inner shirt lays neatly to have that open, relaxed look as Widow, Cap and Falcon travel the world.

The armor plating areas like the kneepads, elbow pads and gauntlets are all well done and the holsters are the appropriate length. I dig the boots although their one piece nature cuts down on some of the articulation. 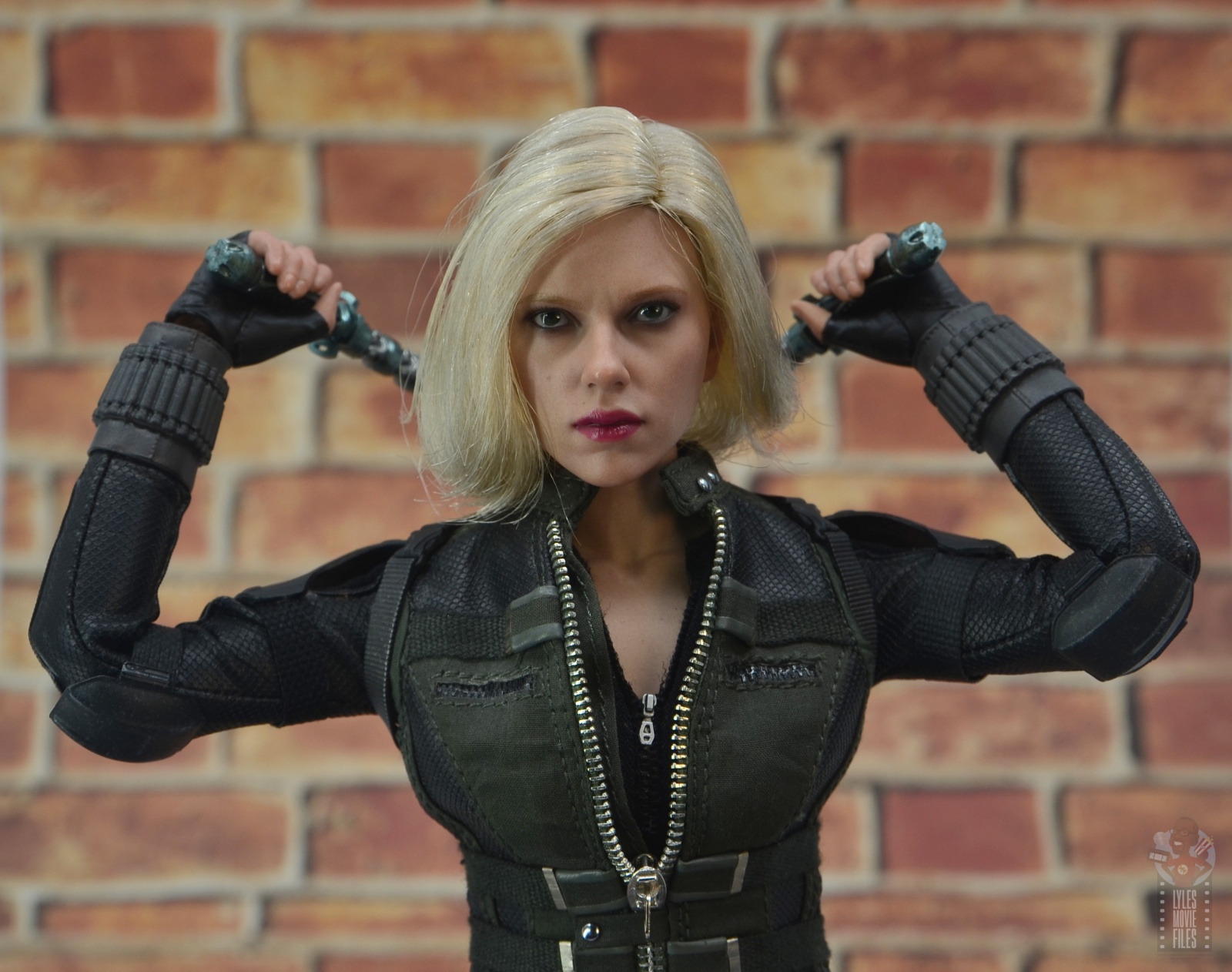 Articulation:  My figure had a janky right arm that keeps popping out of the socket. It plugs back in “easily” enough, but it’s frustrating and something that doesn’t make for an easy fix thanks to the outfit. 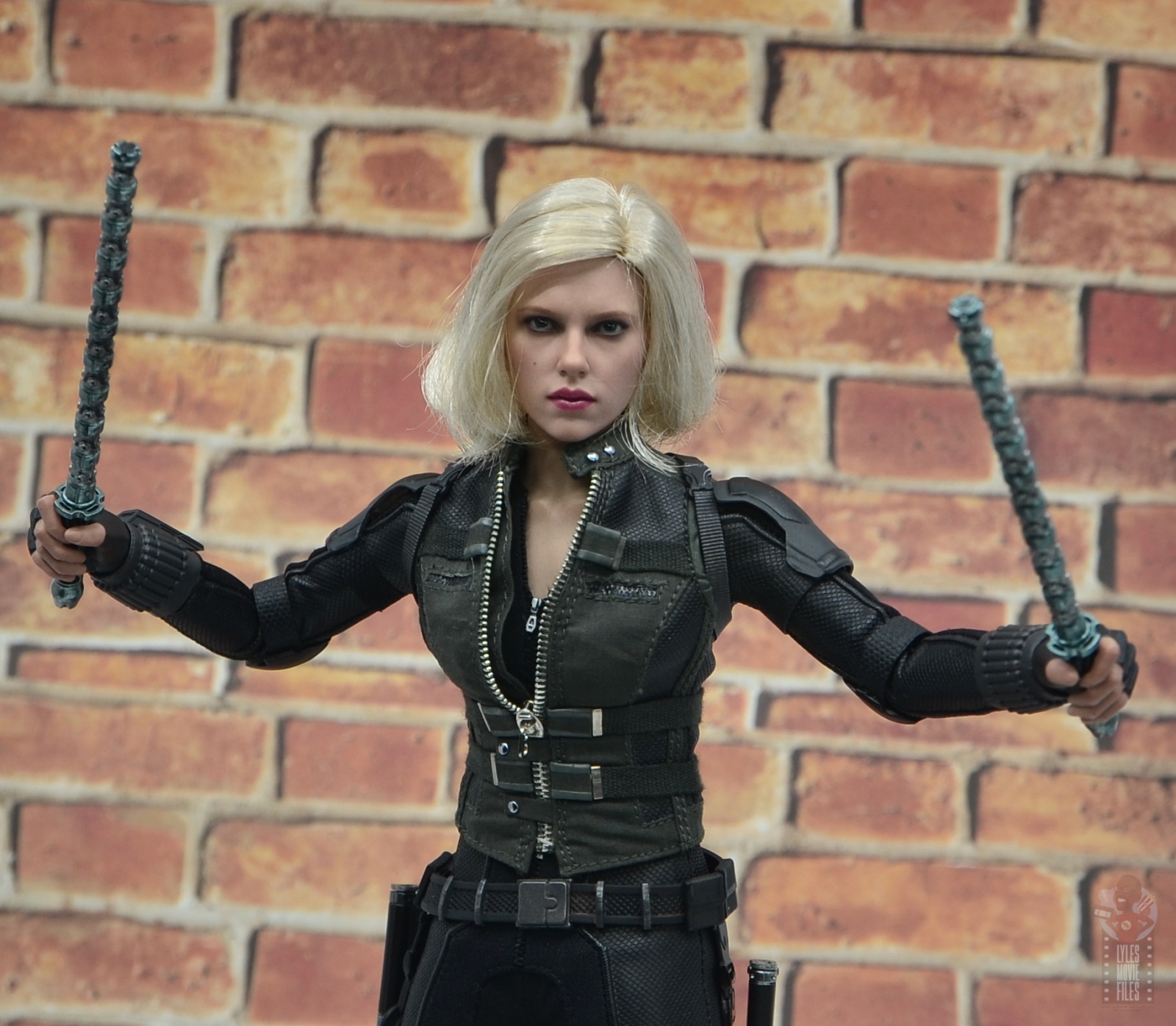 The outfit isn’t too restrictive as the armor plating is flexible and can be moved up and around as needed. However the big issue is the boots, which are one piece and so solid they don’t allow for much range at all. They limit much of the movement you’d expect from a Black Widow figure. To get more exciting poses you’ll definitely need the stand. 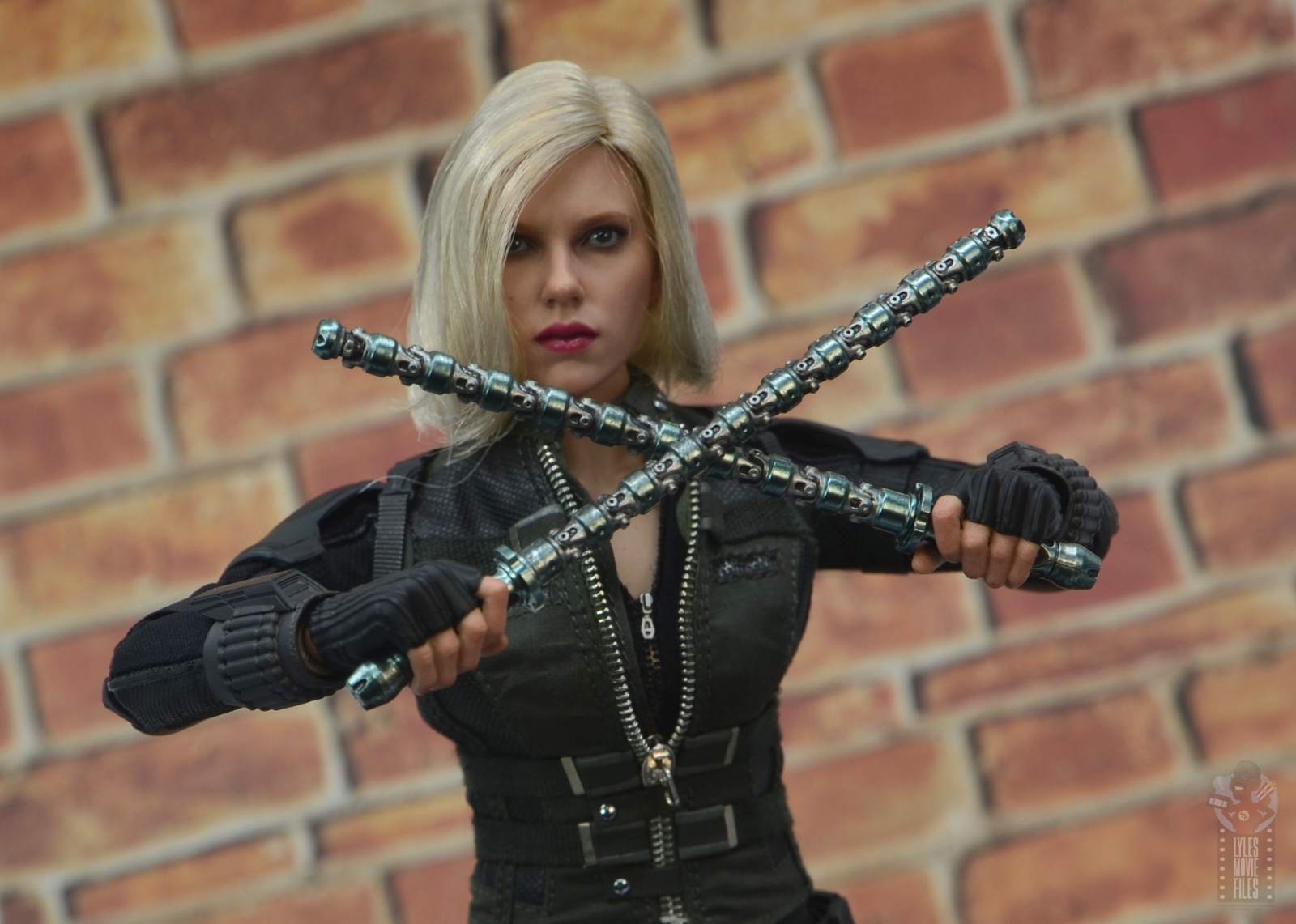 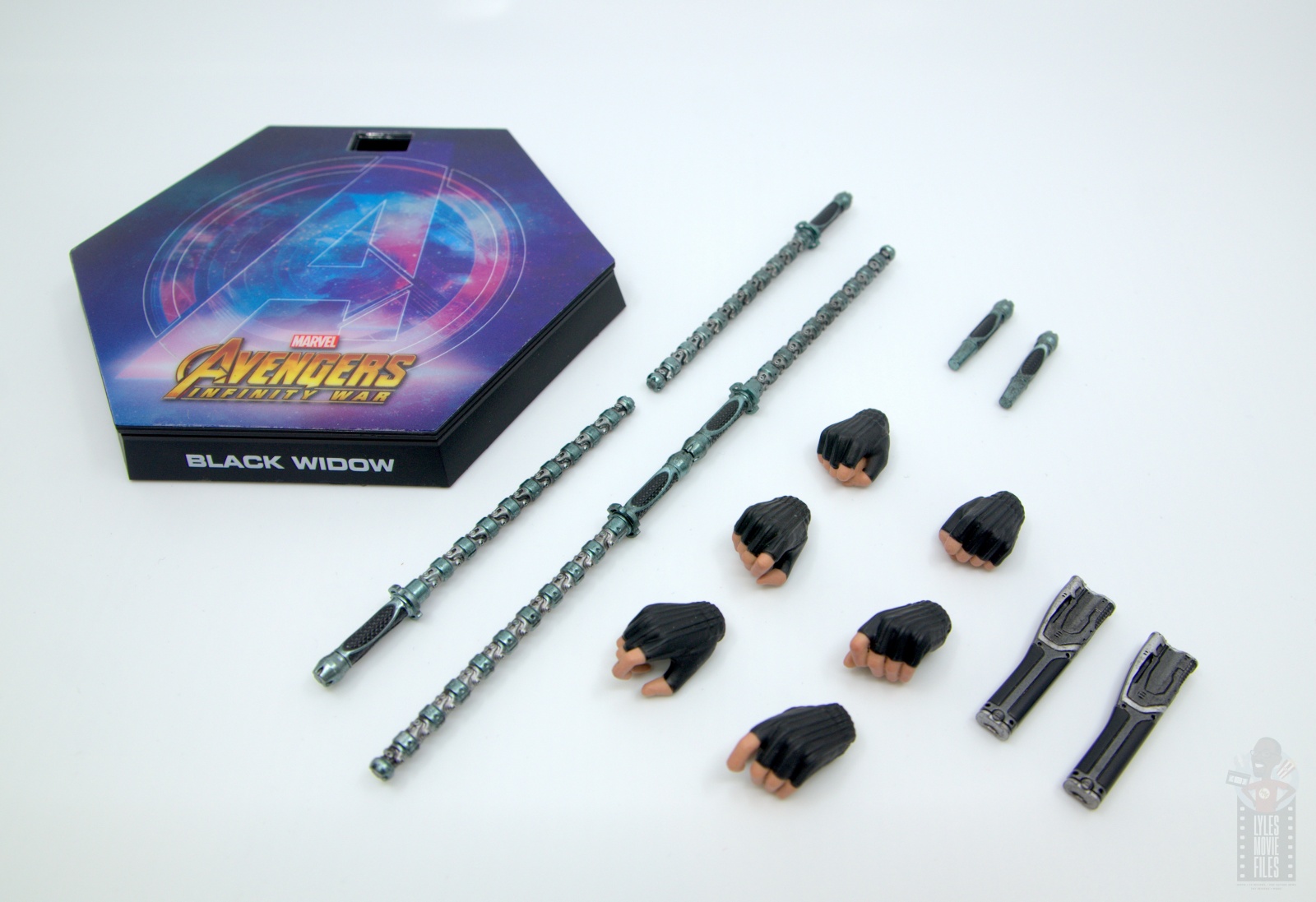 The Infinity War Widow’s arsenal is better than previous figures as she has her signature batons as well as the full staff version. That’s probably smarter than risking damaging the pegs by plugging them in and out as well as having the attachment pieces breaking up the sculpt. 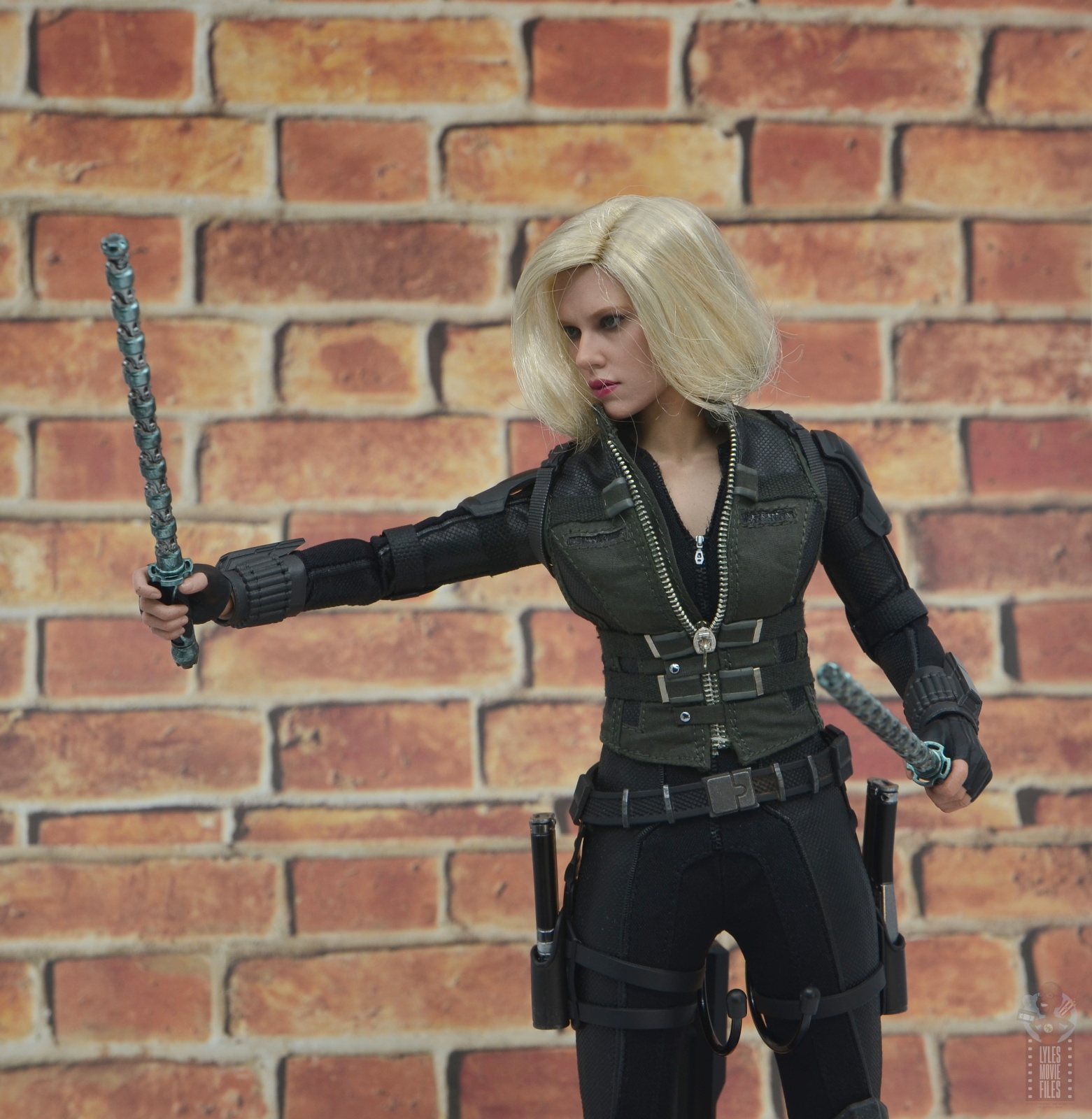 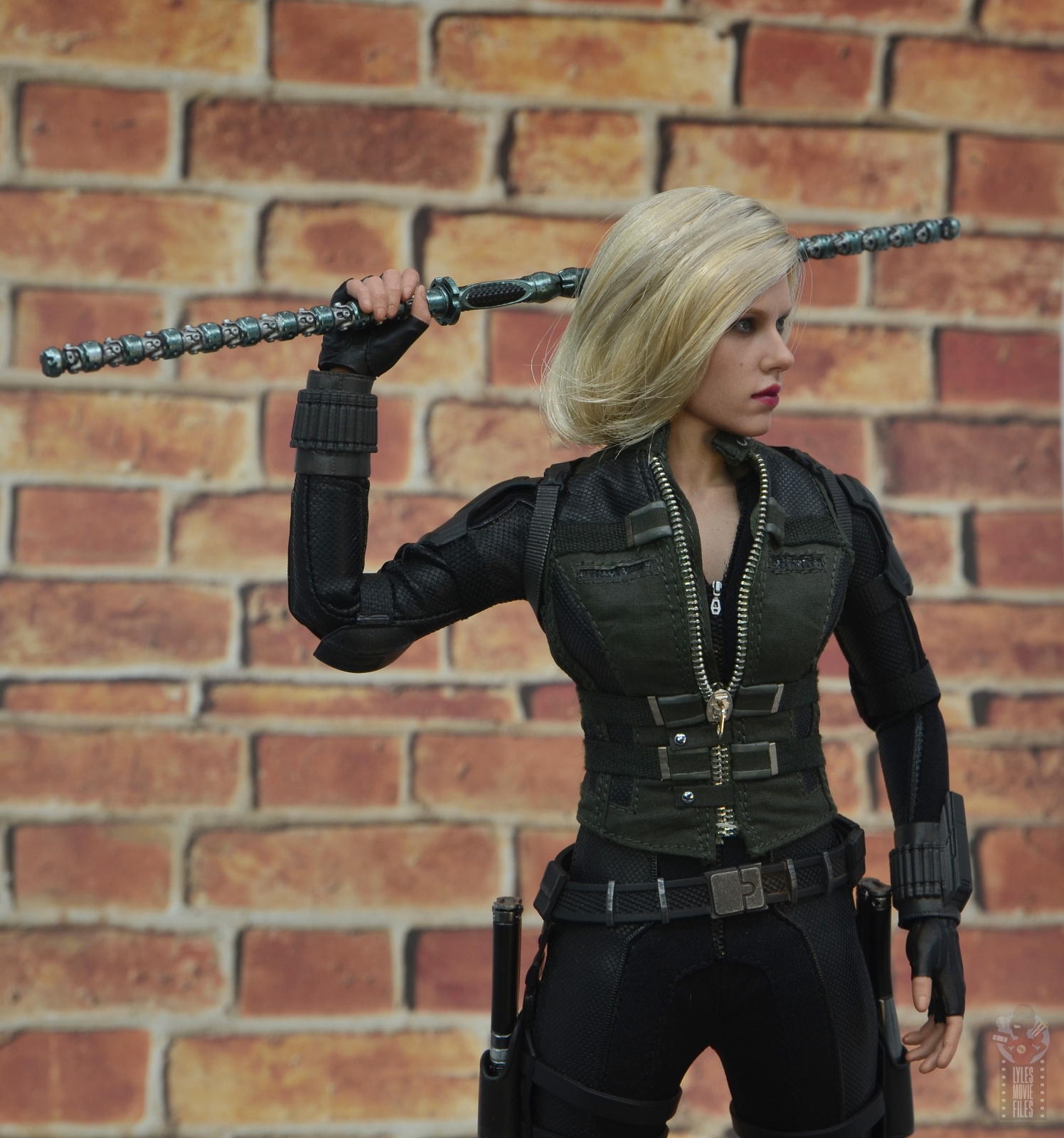 The detail on the staff is impressive and does a great job of showing off the segmentation giving a good glimpse at how it would be used in real life. 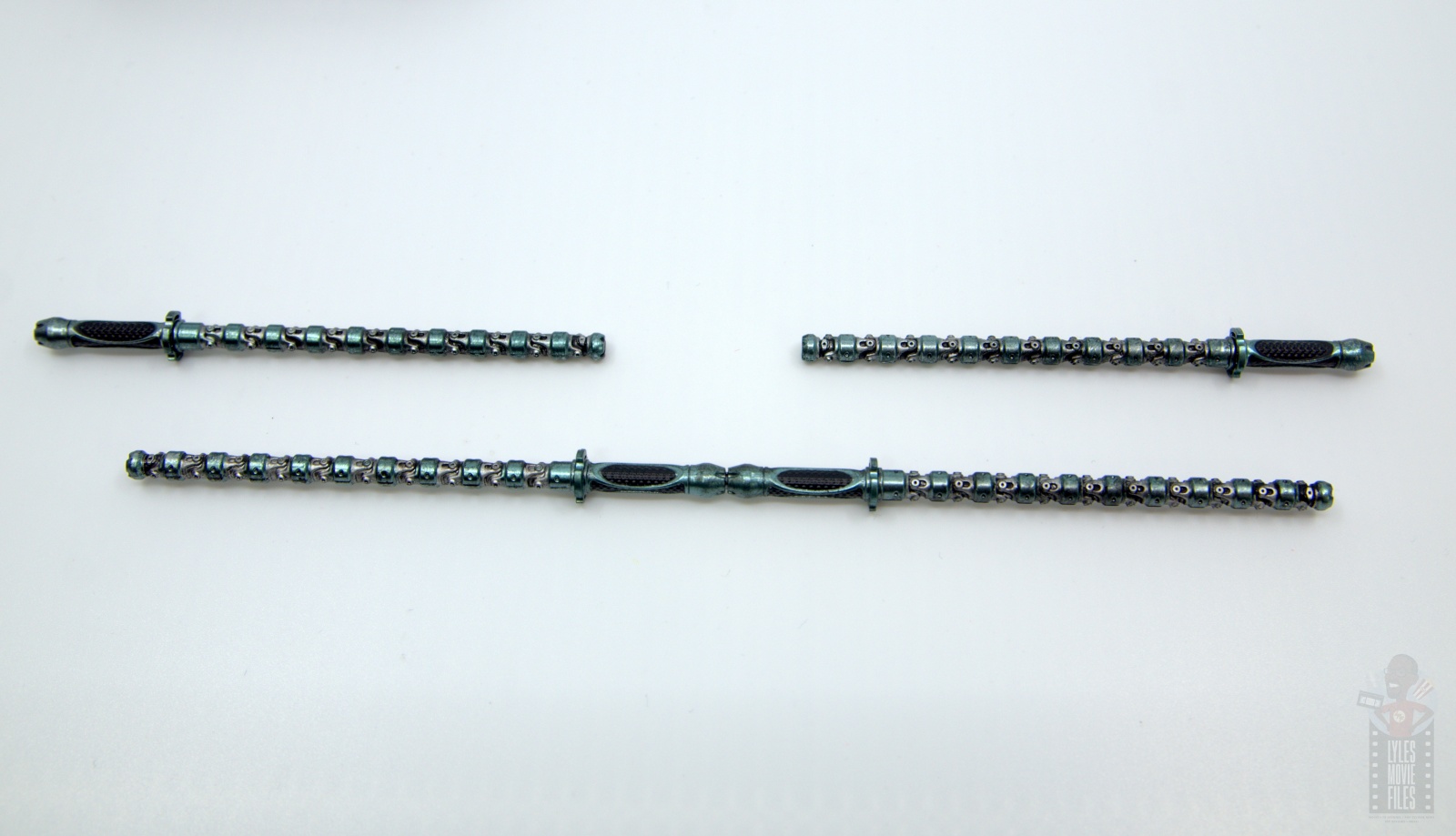 She also comes with a pair of disk shooters. They’ve got some solid detail as well and you can see the tips of the tasers as well. Widow doesn’t use guns this time, so the disk shooters go into the holsters. 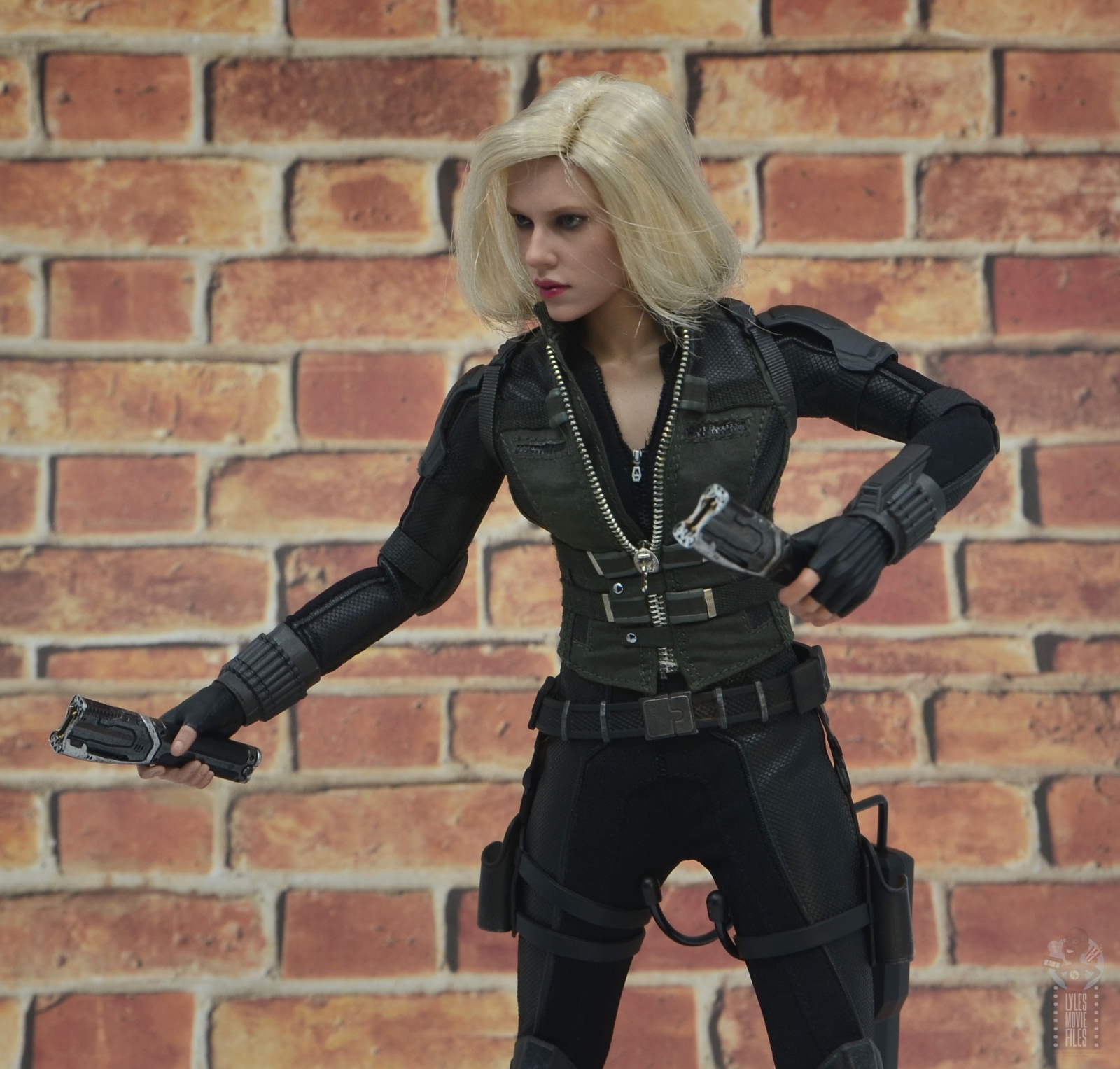 Worth it?  Black Widow is $220, a better price than a lot of the other Infinity War figures. And if you act now, you can get her for free shipping, which is always a great deal. But heads up as the figure is currently listed as low stock so don’t wait too long. 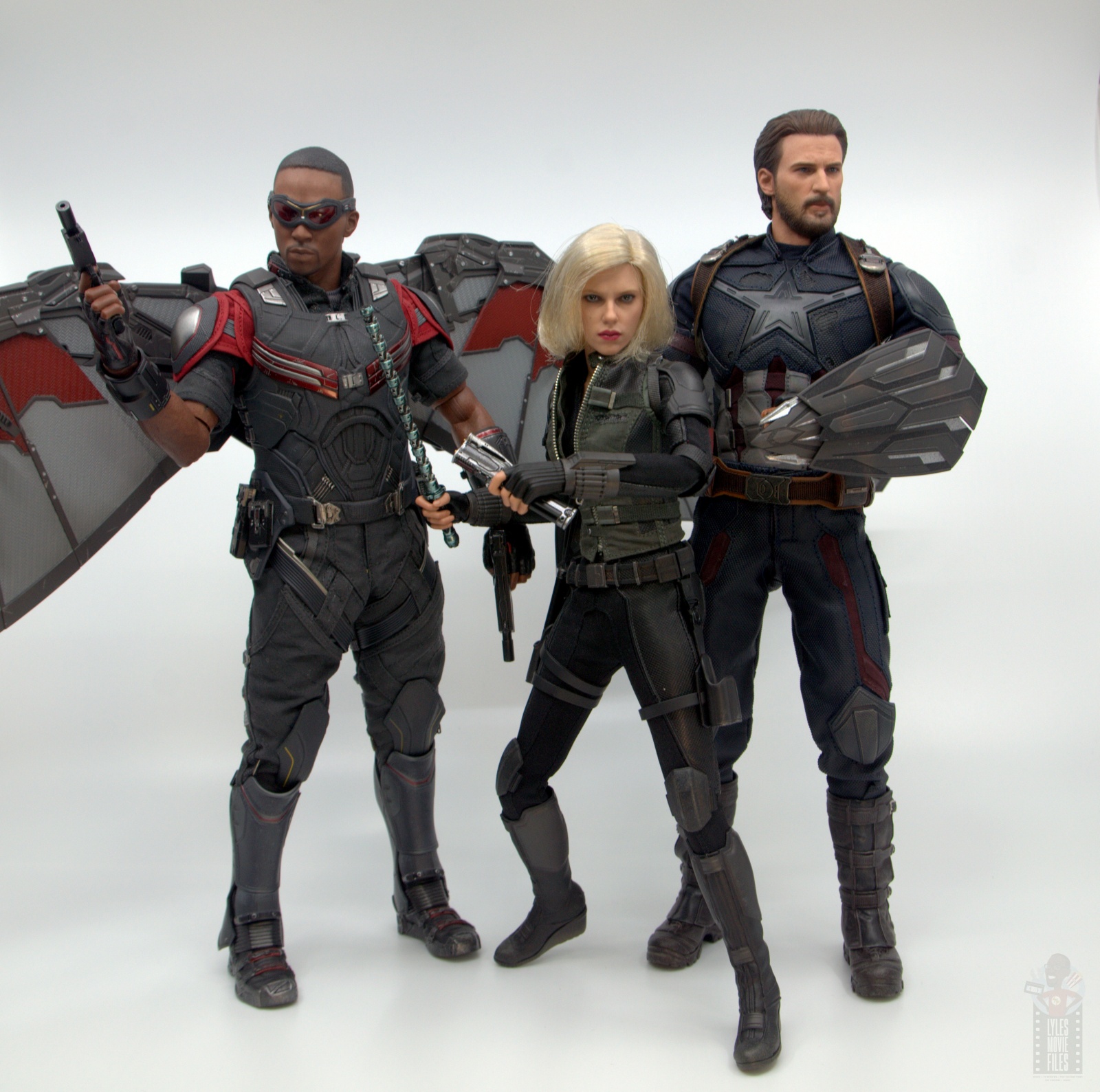 When I fix the hair, I’ll give this another half point, but the boot limitations were a little frustrating. Still this is a solid and must-have entry in any Infinity War display and makes for a nice alternate look for Black Widow. 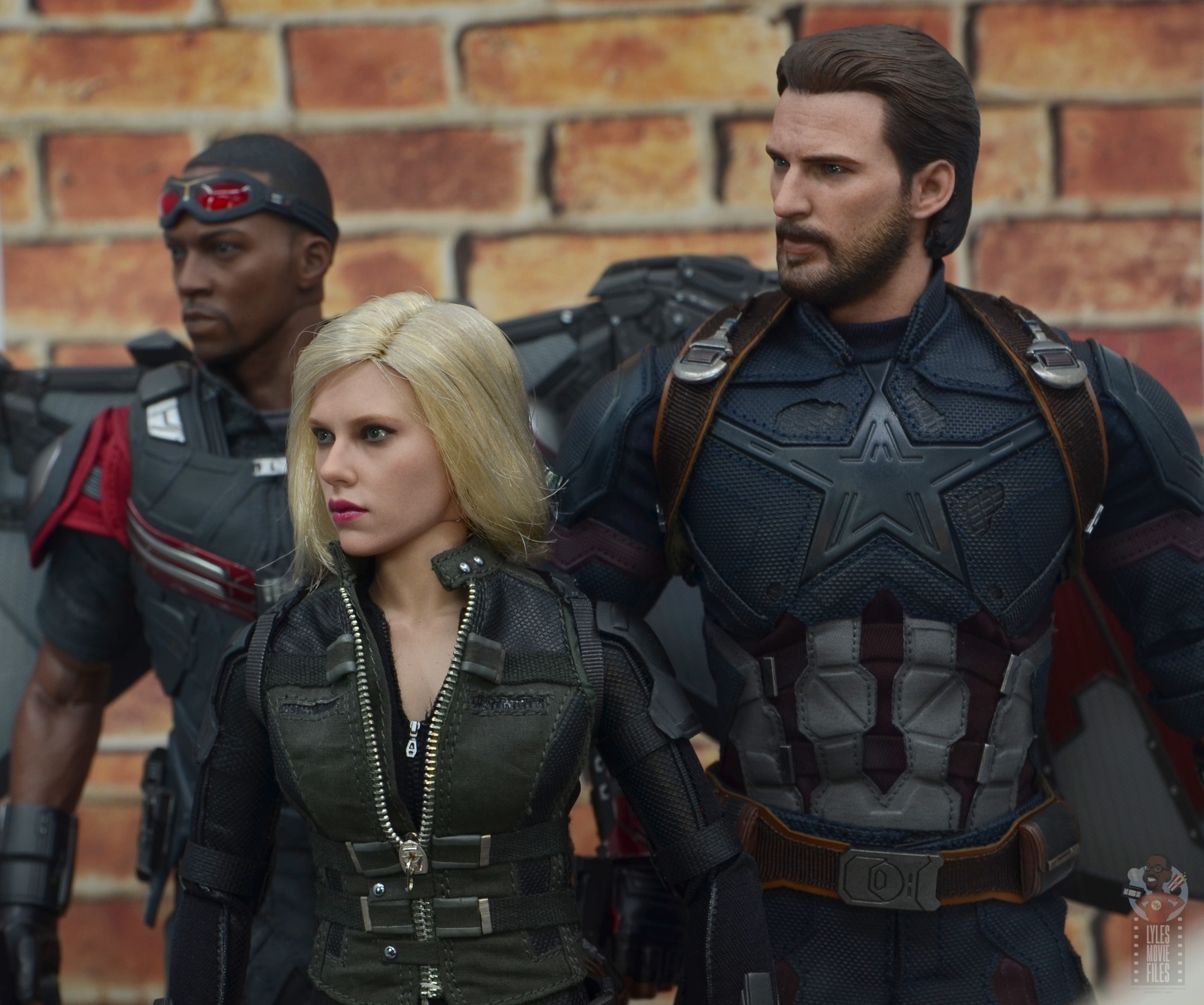 Where to get it?  Like I said, Sideshow Collectibles is selling Hot Toys Avengers: Infinity War Black Widow for $220 with free shipping so I highly suggest grabbing her as soon as possible.