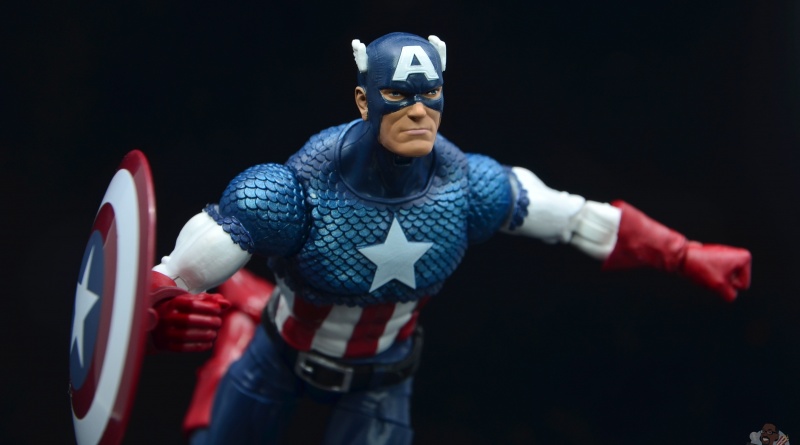 Thor was easy, Iron Man was a bit more effort, but the Marvel Legends 80th Captain America figure was the one I absolutely needed in my collection ASAP, which of course meant it proved the most elusive even with pre-ordering from Wal-Mart aka THE WORST.

Anyway, this was perhaps my most anticipated of the Big Three Avengers revealed in this style so my expectations were high. Let’s see if Hasbro could meet them. Spoiler: Yes!!

Packaging:  I’ve raved about the Marvel 80 Years packaging already, but why not do it a third time? It’s got this classic comic book style presentation and the window showcases the figure nicely. I like the Captain America logo as we don’t even need a Marvel Legends logo on these any longer. 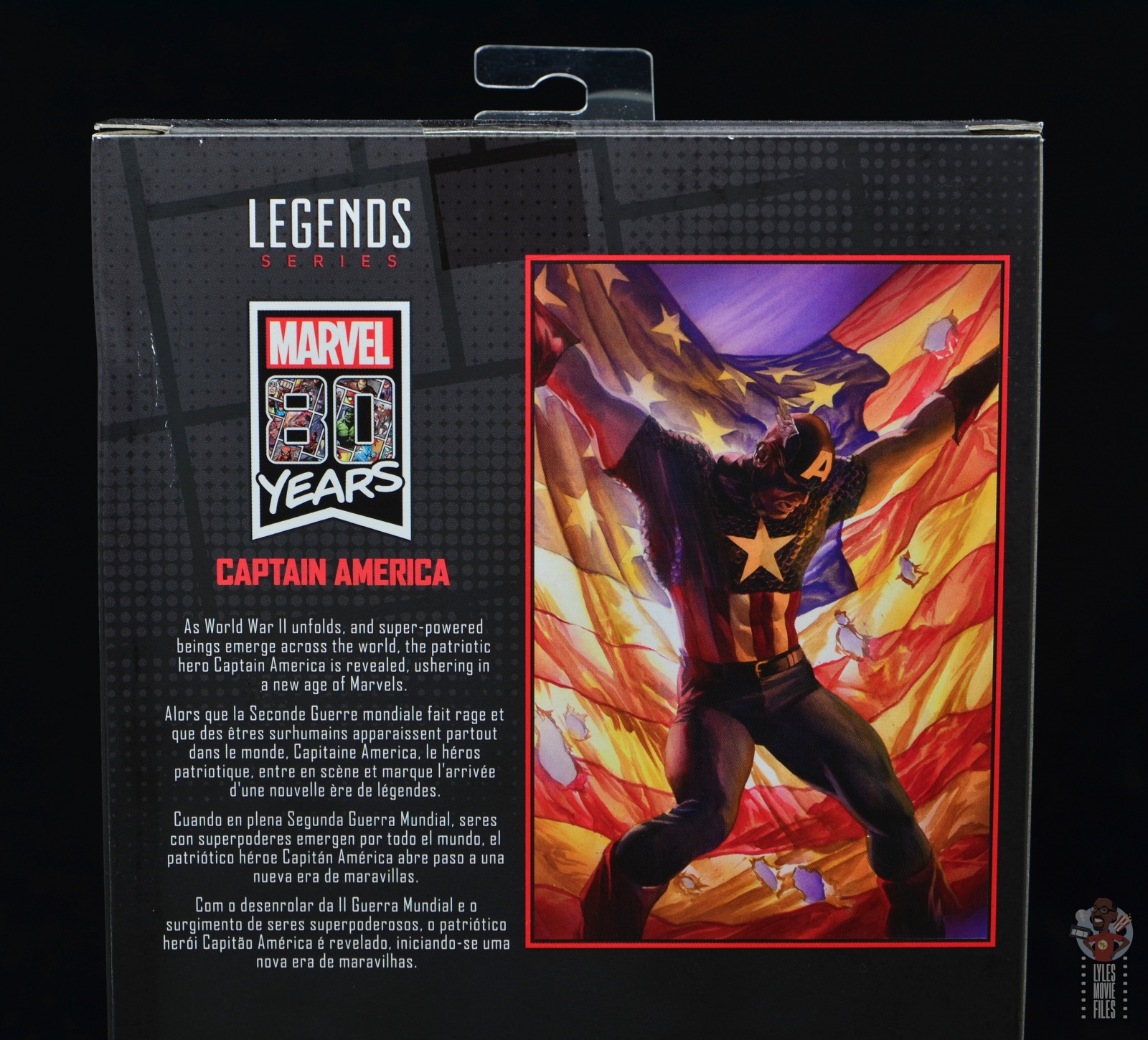 Continuing the Alex Ross/Marvels tie-in for the line, Ross’ artwork is used on the side and the back package. I like the back art fine enough, but I wish it was more like Thor’s with a history collage in one image. The bio sticks to Cap’s early years, which is an interesting choice, but like the others, we all know Cap’s history now.

Likeness:  Ross tends to make his characters in a realistic style with chiseled jaws and stern expressions. The Cap figure has two head sculpts and the Ross figure is the one on the figure. For a change, I think the Ross head actually works for Cap as it’s less caveman and more heroic leader of the Avengers. 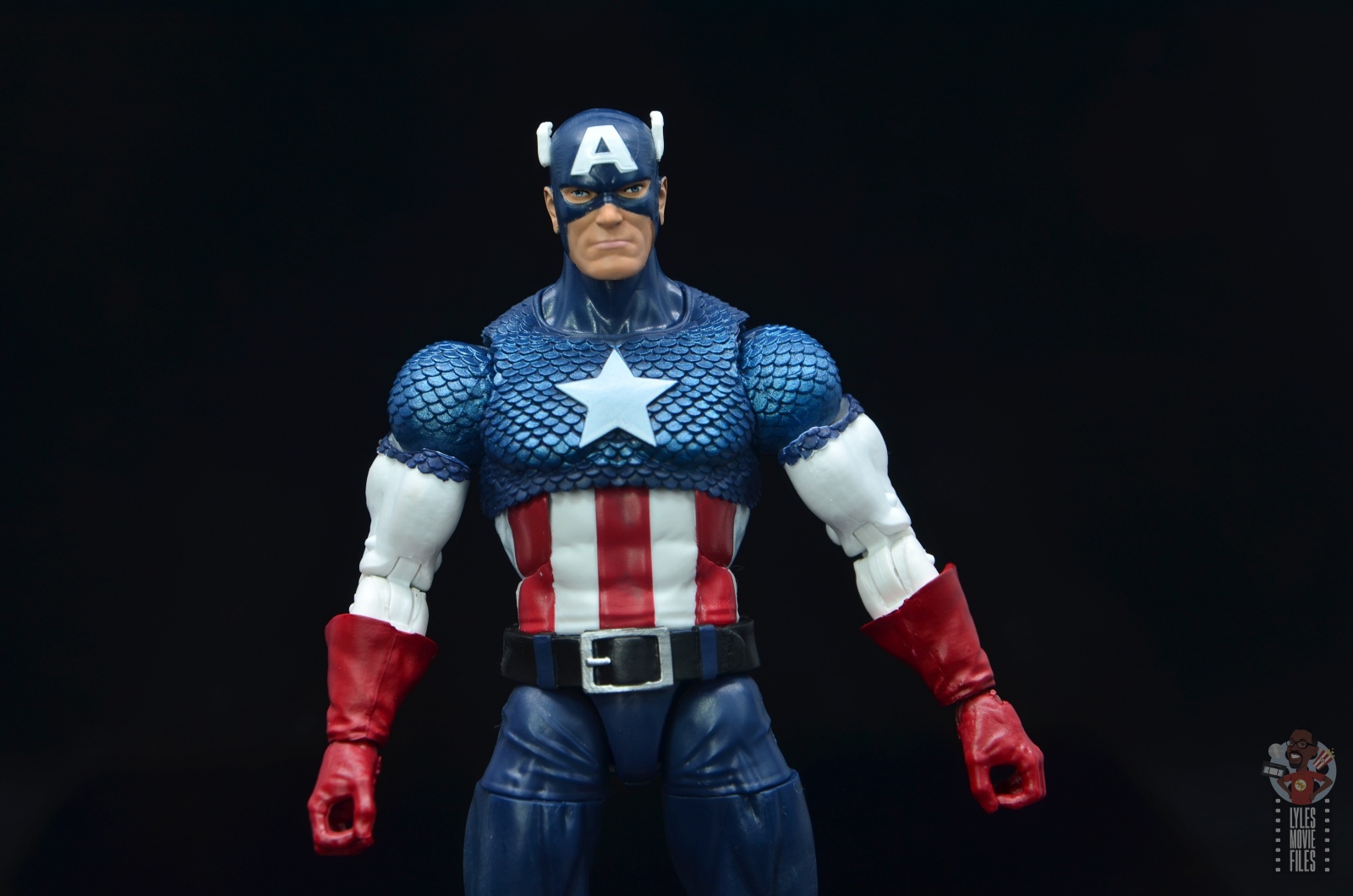 The real improvement and why this will be the new default Captain America is the chain mail. It’s really well done and it even carries over to the sleeves. Hasbro even sculpted the stripes on the torso. The gloves and boots also came out nice as well although they’re reused from the previous Captain America figure. 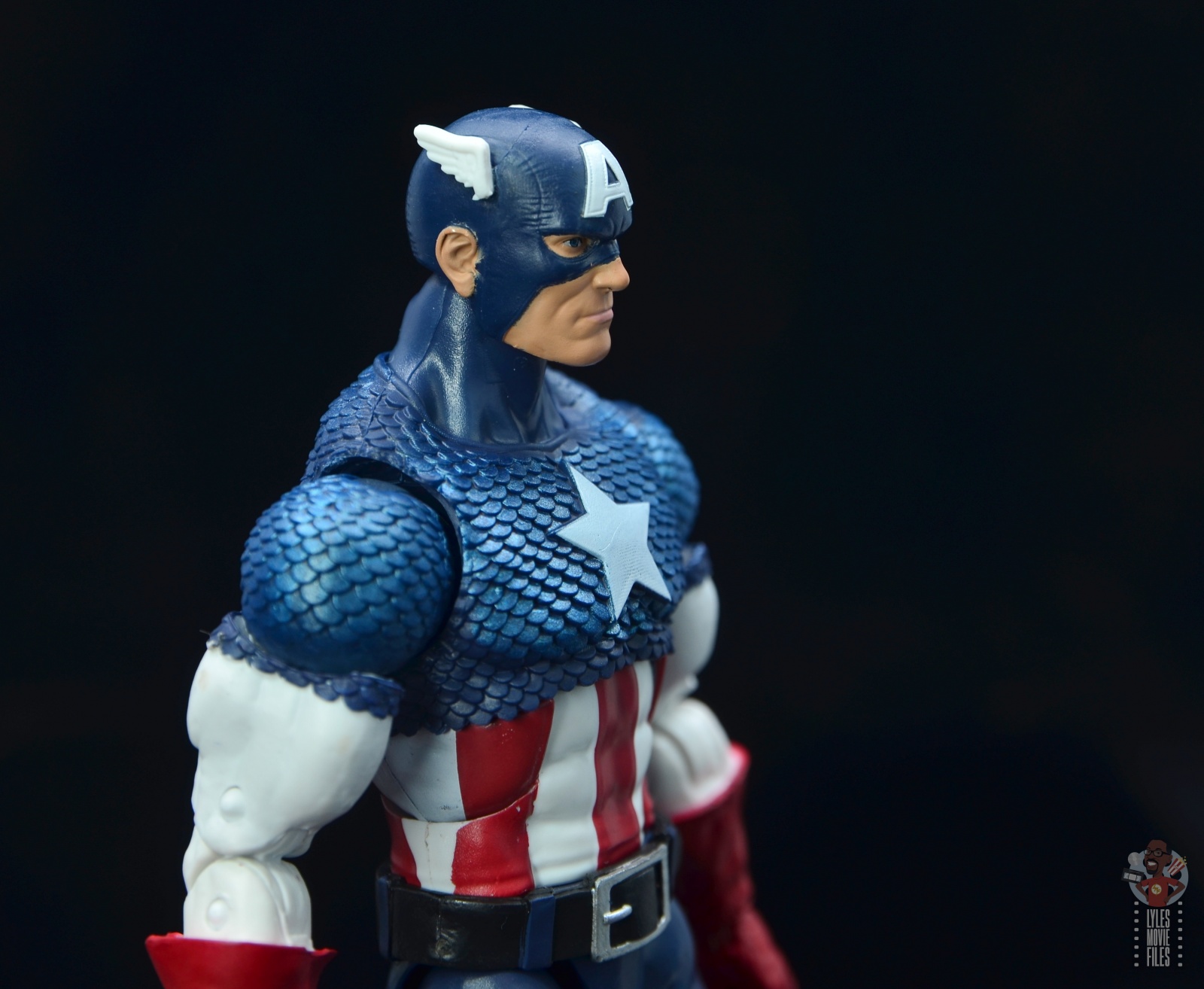 Maybe the star is smaller than the more dominant one Ross used, but it’s a very small qualm.

Paint:  The “small” controversy here is the shade of blue in Cap’s costume. It’s not the powder blue of the comics, but it still looks great.

I was worried about the red and white stripes, but they turned out great. Besides a little overspray on the A, my Cap’s head was fine — the eyes have been a constant problem for folks. 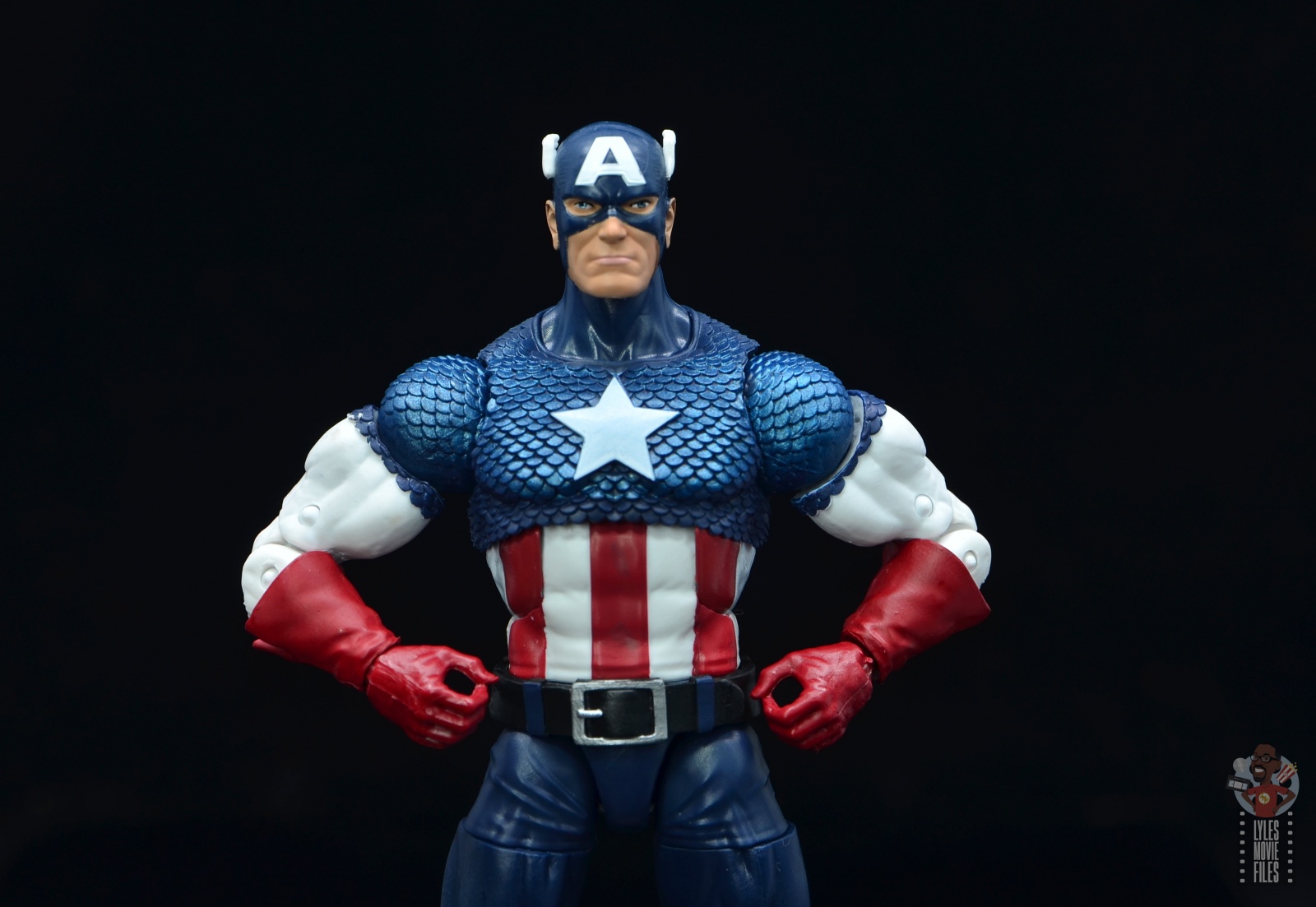 My biggest paint issue was actually the star, which looks like it got a thumbprint on it before the paint dried. I think this will be easy enough to fix on my own thankfully. 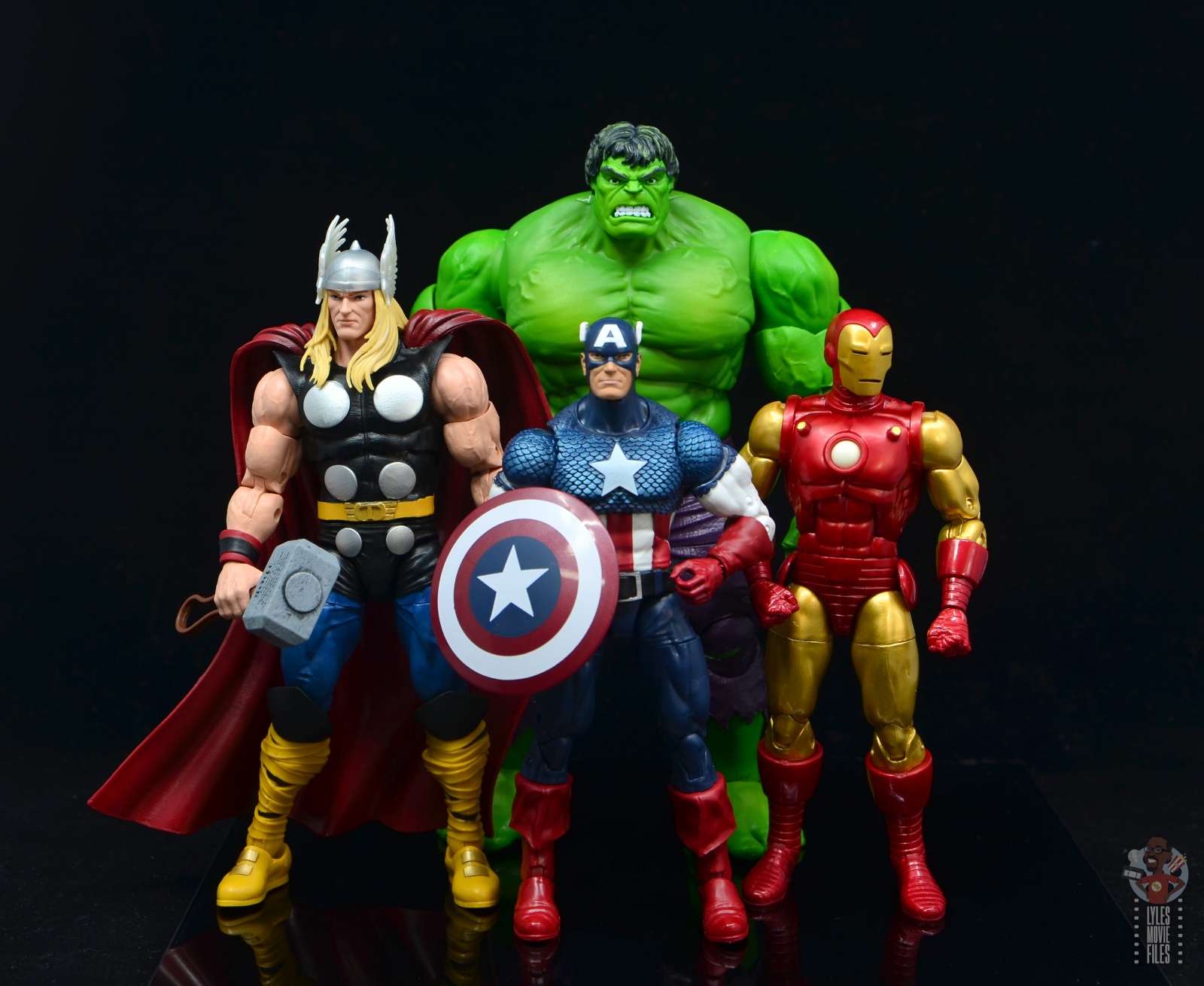 Scale:  One of the big concerns with Captain America was he was going to be too tall compared to the existing Avengers figure. Thankfully, Hasbro scaled him properly so he doesn’t tower over everyone while looking like he’s a super soldier compared to Black Panther and Hawkeye. 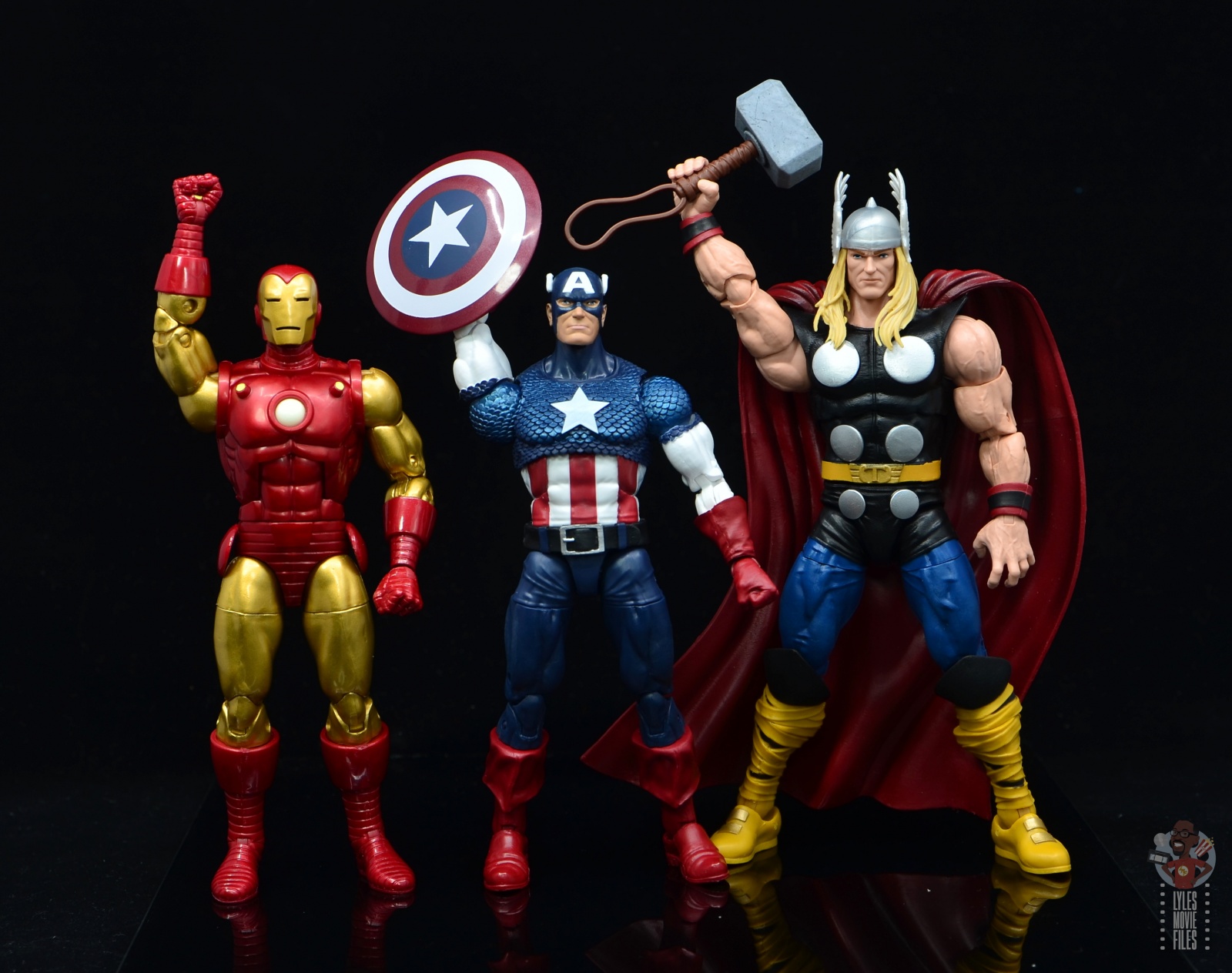 Articulation:  Cap needs to be well articulated as he’s the best fighter in the Marvel Universe. This figure definitely hits all those marks as the figure really moves nice and easily. He was a lot of fun to maneuver and try out various poses. 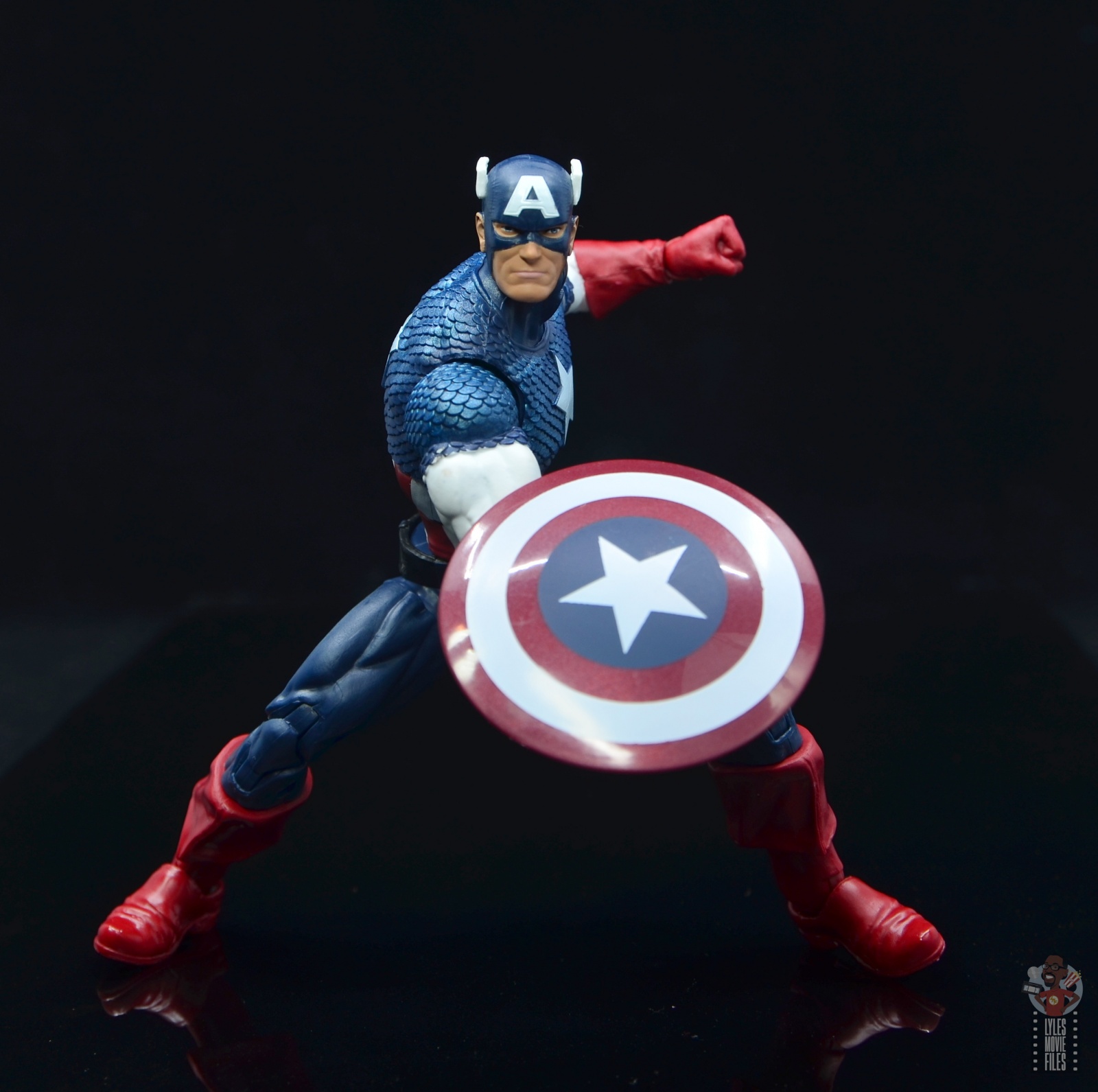 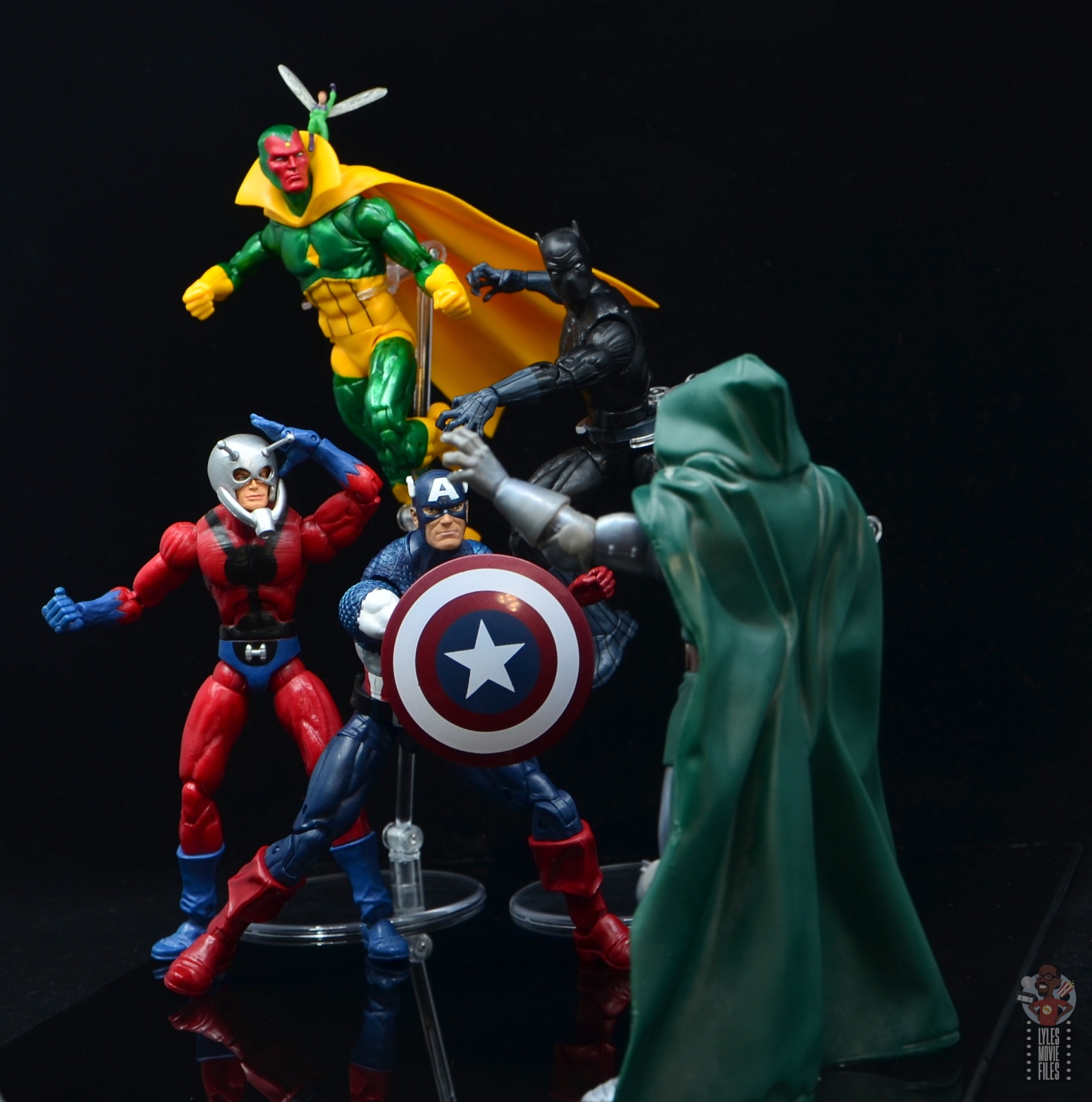 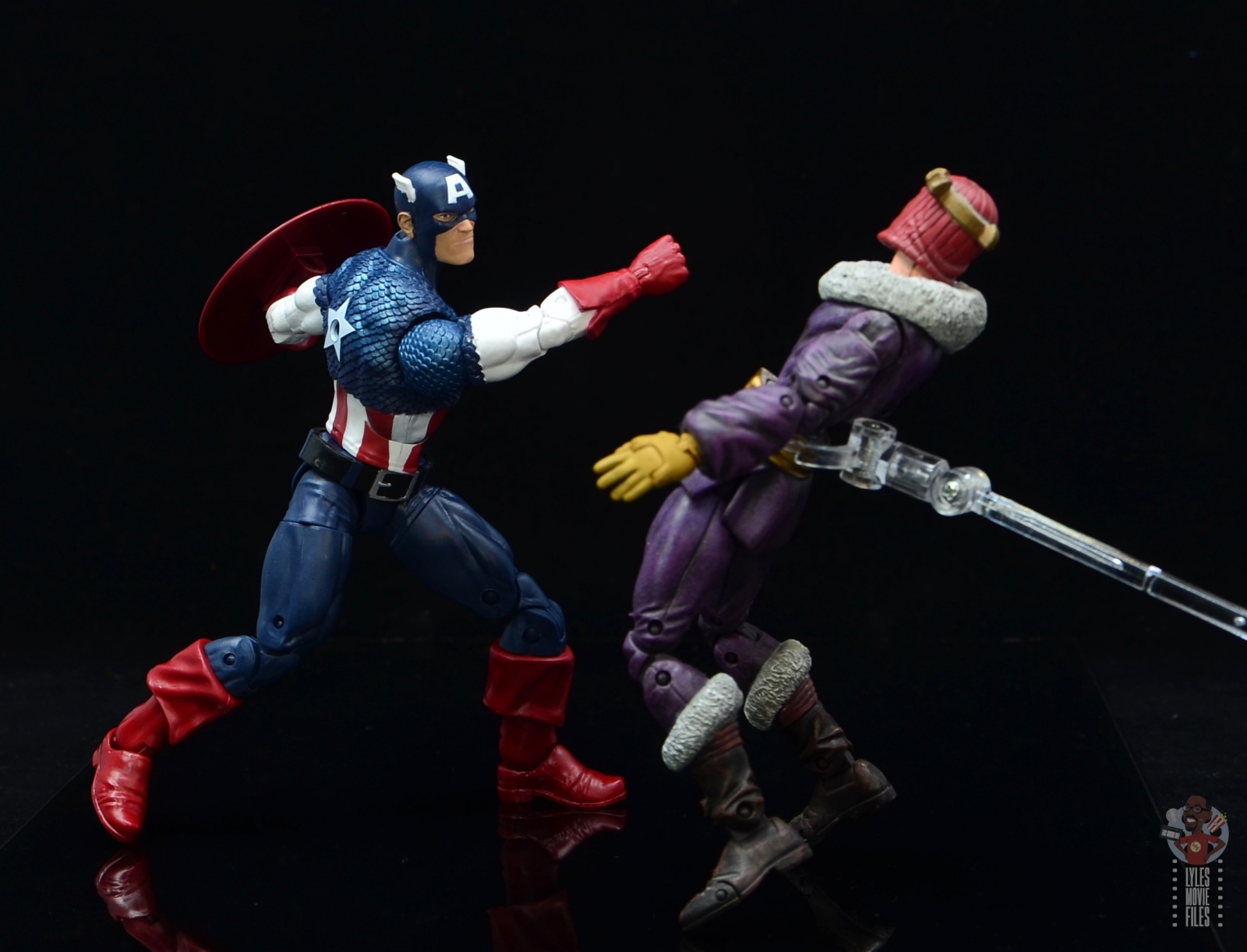 Accessories:  Captain America has a strong allotment of accessories that helps justify its cost. 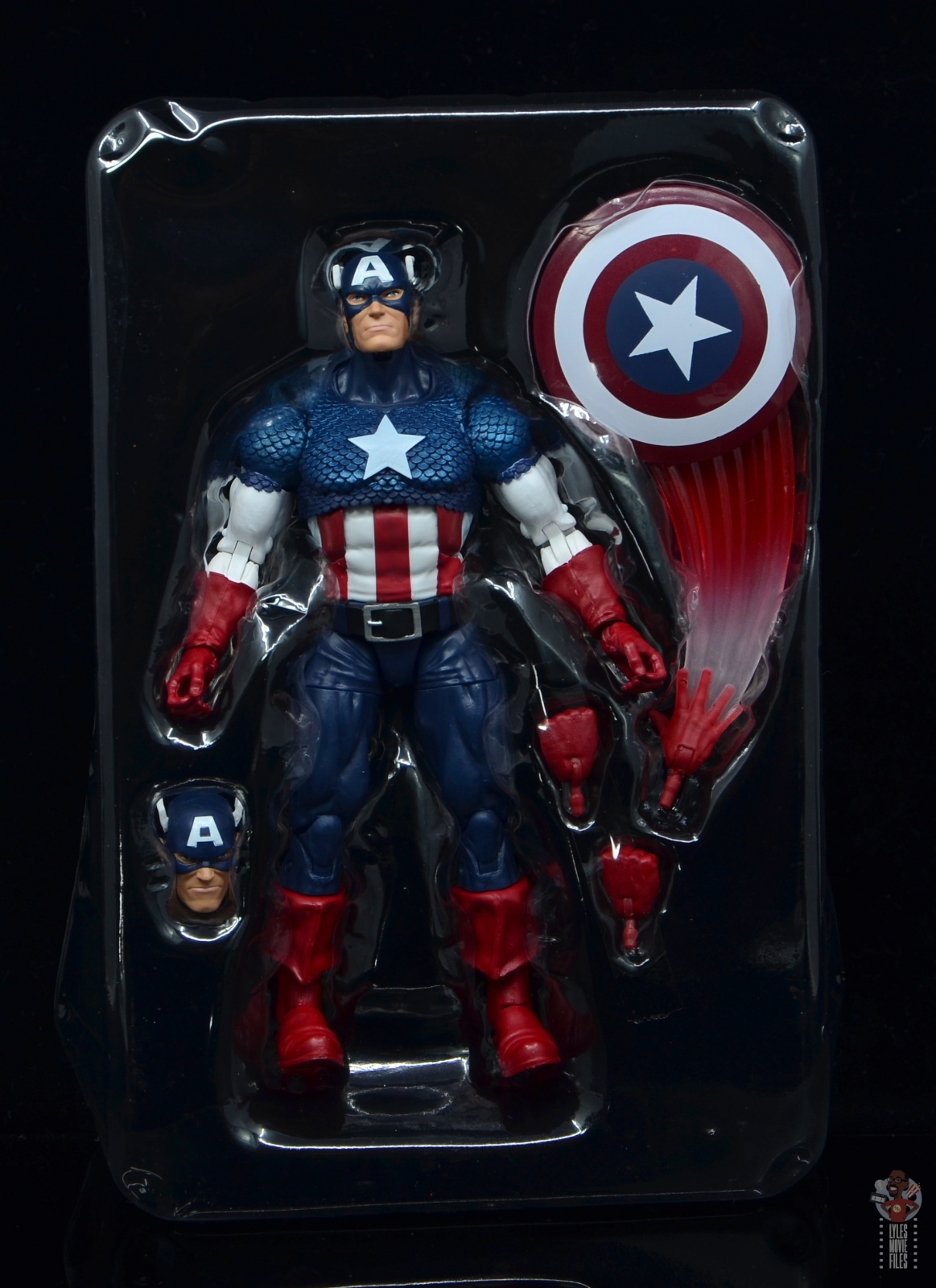 In case you’re curious, the Ross head is the one that is on the figure and the comic version is the extra with the block in the A. The comic head is a little too much Cap as a sad brute for me. It would be ideal for a U.S. Agent head sculpt, but not for my man Steve Rogers. 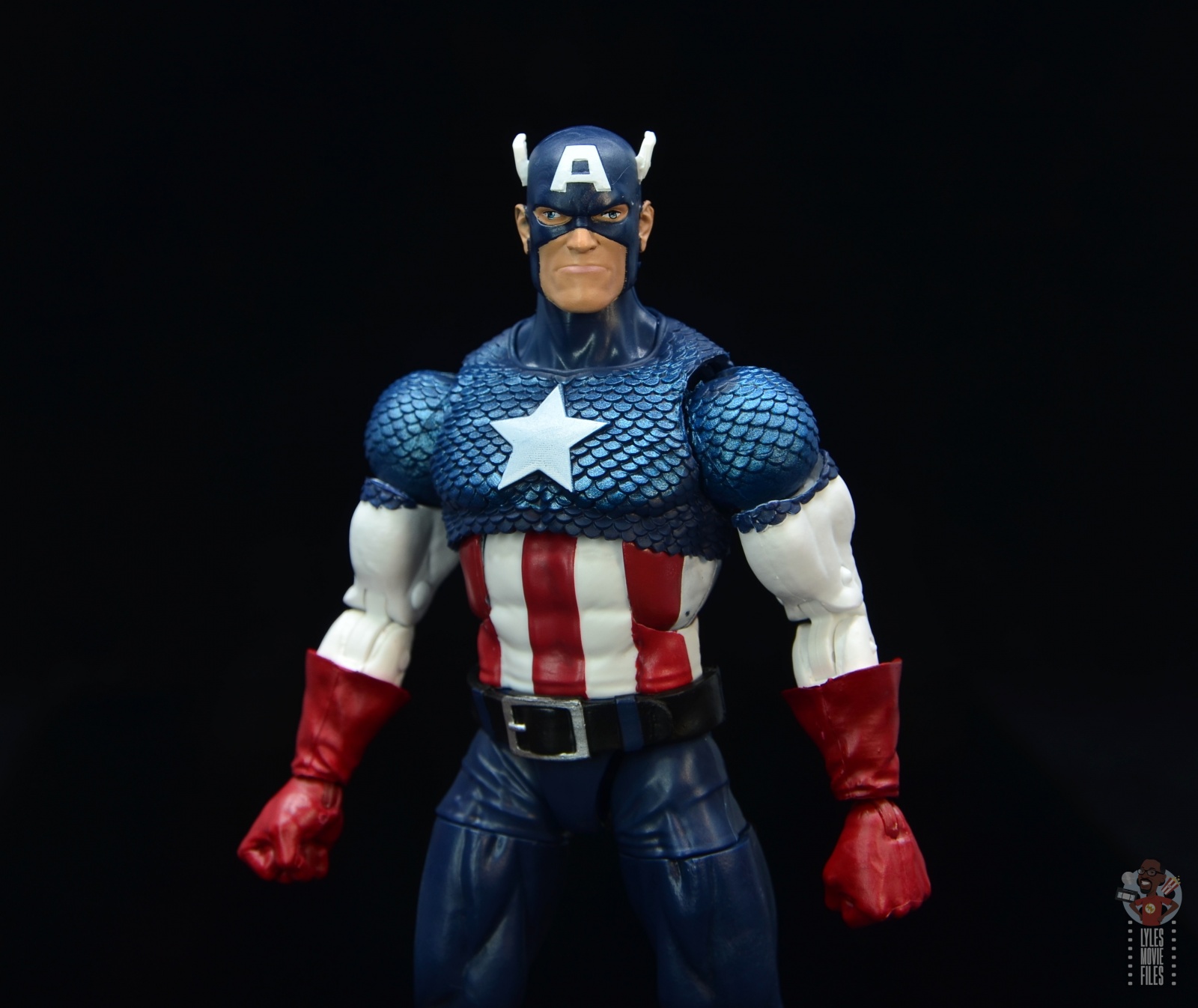 He’s got two fists and an alternate right hand with the shield-slinging feature. 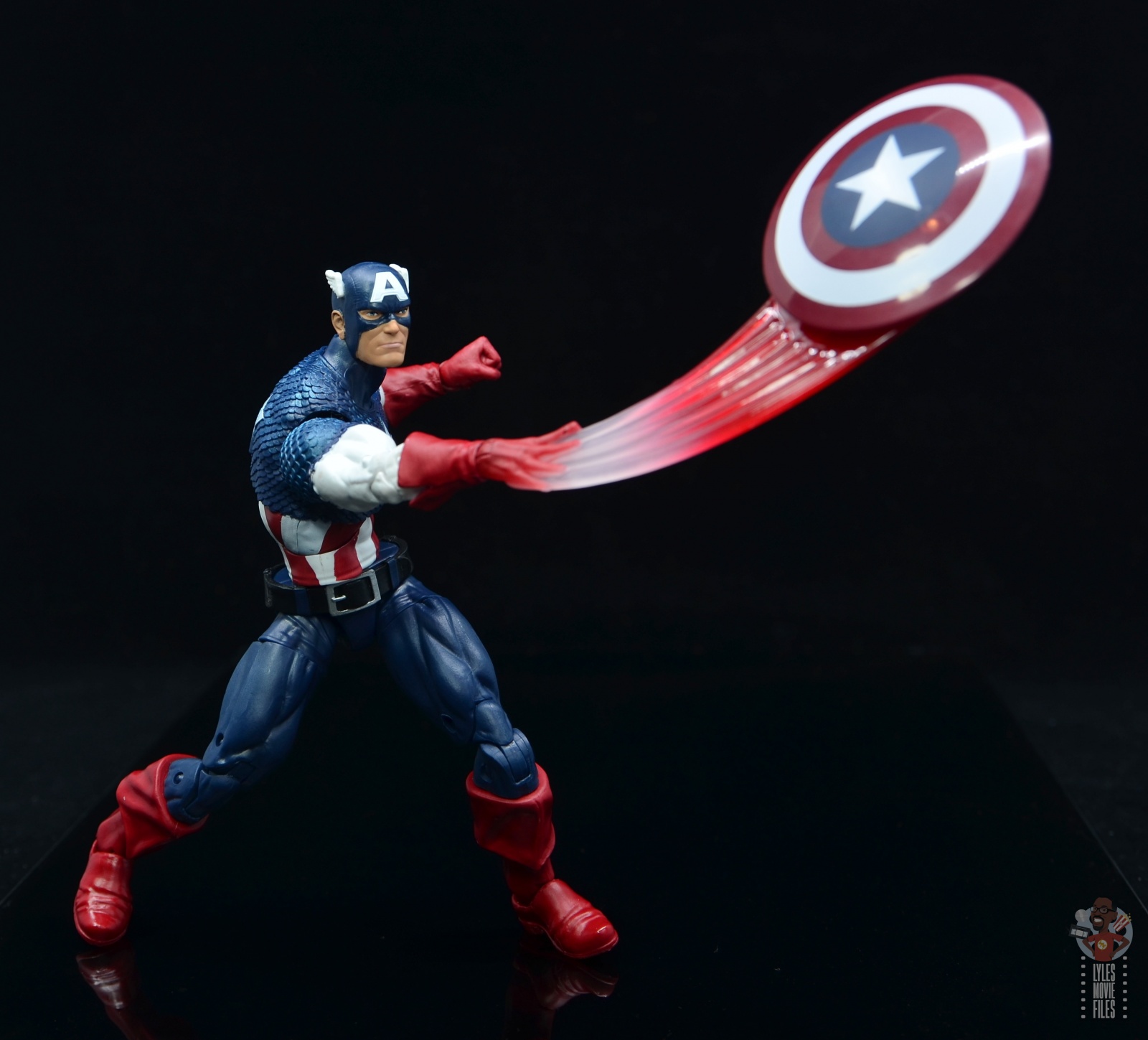 The shield is a little small for this Cap. Some collectors have swapped it for the larger size Cap in the MCU two-pack with Crossbones. Eventually, I’ll review that one so I’ll go back and add that pic later.

Worth it?  Captain America costs $25. He’s got enough dedicated sculpting to warrant a few extra bucks and the extra head is a nice bonus. I’m OK paying premium prices for an outstanding figure of this kind of quality. 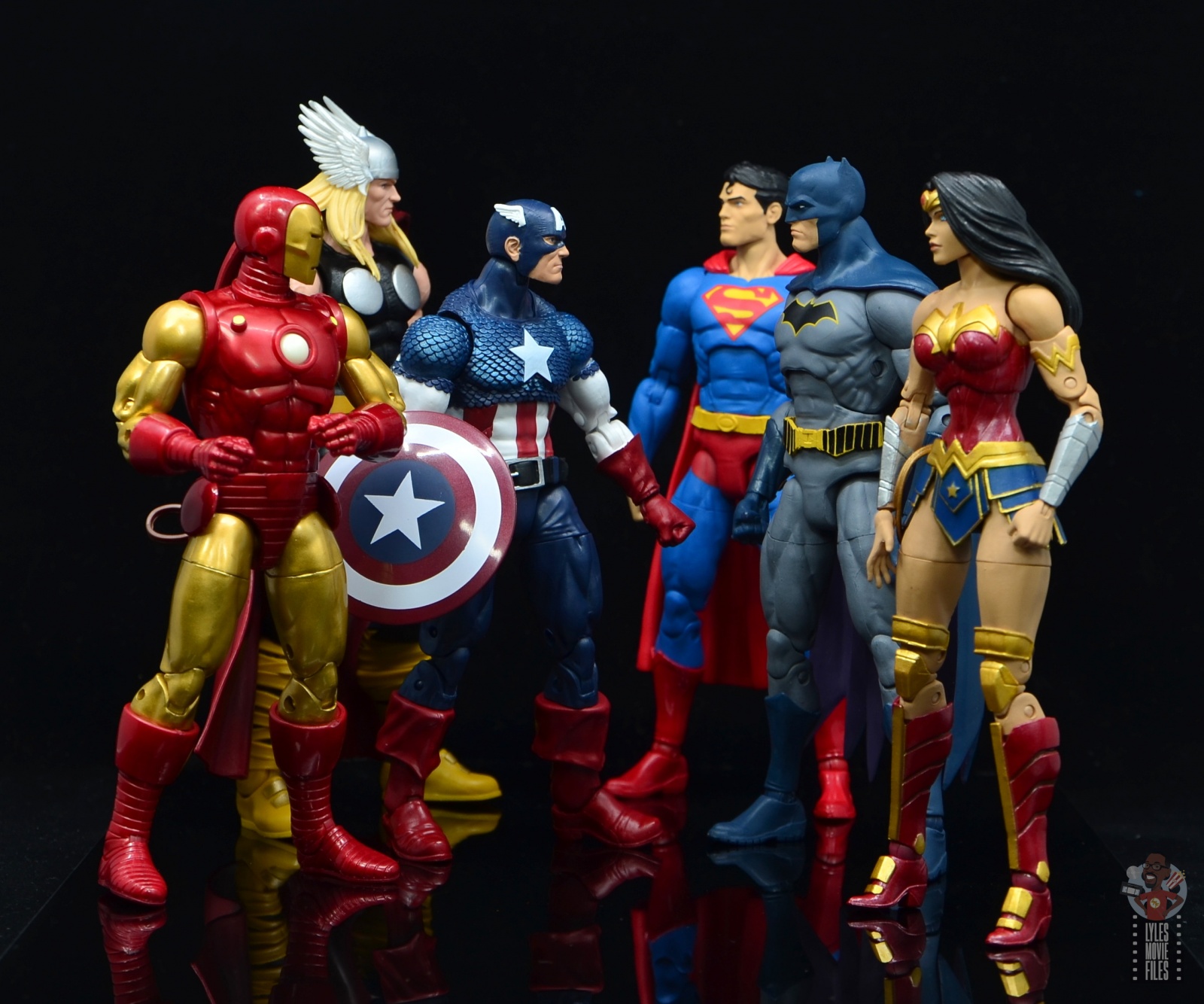 Cap fittingly is going to be in a three-way battle with Iron Man and Thor for Figure of the Year honors. I don’t even know if I have to get Cap in lighter blue colors. It’s a great figure and I won’t need another classic Iron Man again. 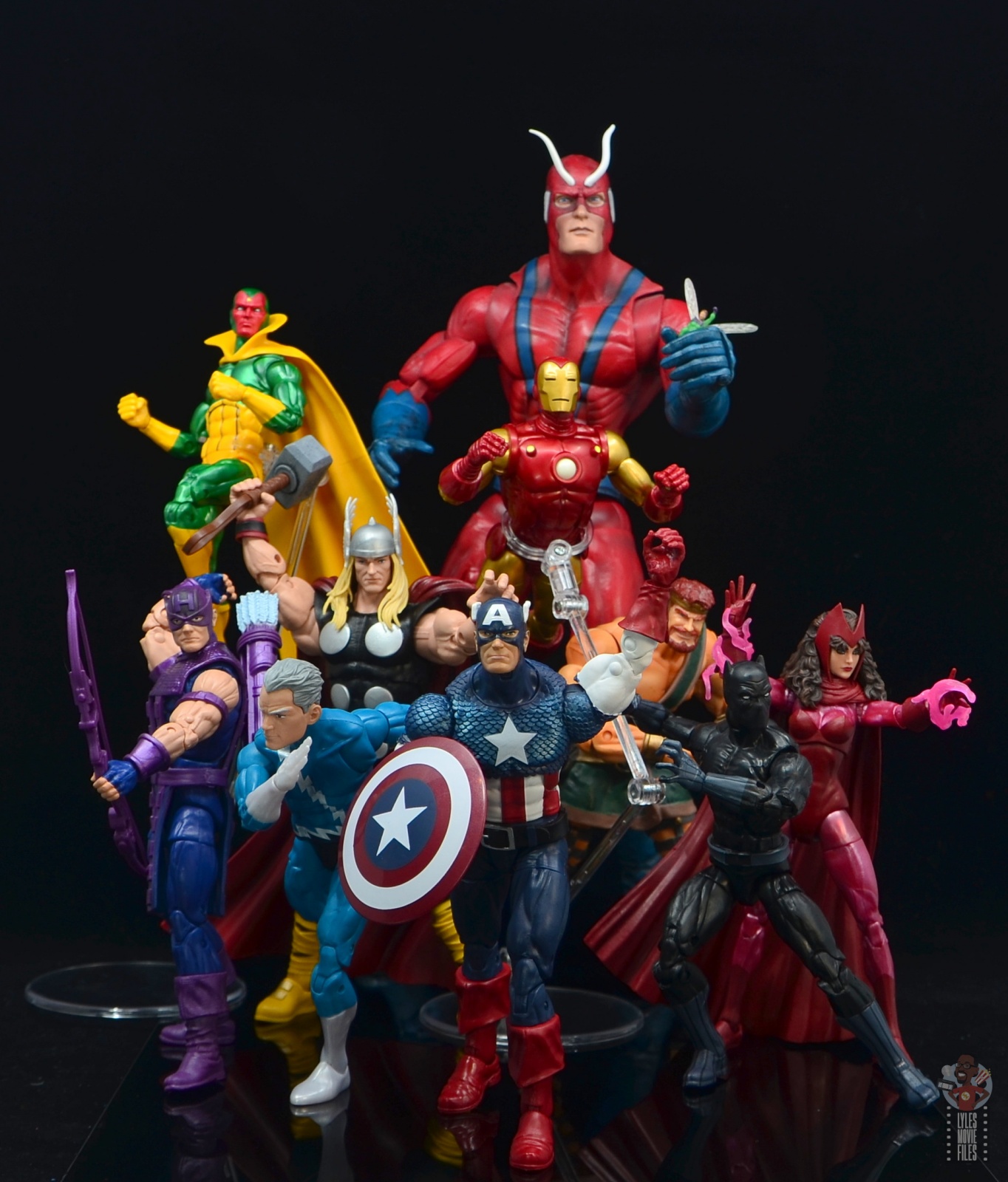 Where to get it?  Here’s the challenging part. Cap was nabbed as the Wal-Mart exclusive. This means if your local Wal-Mart sucks at stocking Marvel Legends this is increasingly tricky. And you can’t really rely on Wal-Mart’s pre-order system. Eventually, you can probably find him through resellers on LMF affiliate Amazon.