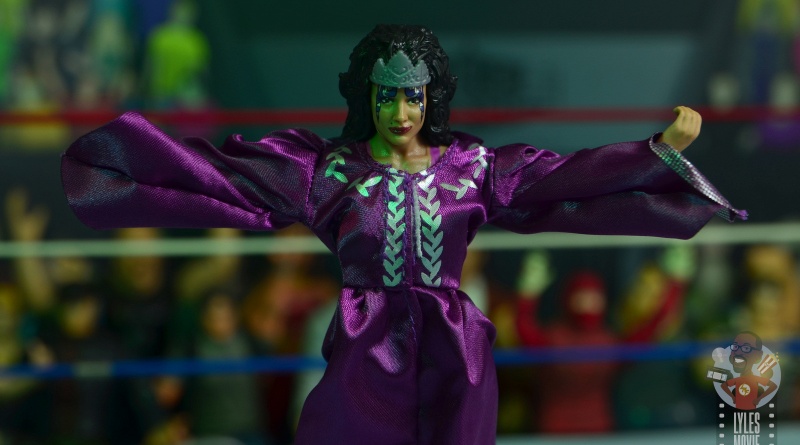 Whether referred to as Sensational, Scary or Sista, Sherri Martel was one of the most unique characters in the 80s-90s wrestling scene. She could put on entertaining women’s matches and be a formidable valet/manager for some of the biggest stars in the business. Mattel hasn’t given us a lot of Flashback females so I was thrilled when they revealed a Sensational Sherri figure was in the works.

That enthusiasm diminished when the figure was revealed as a Wal-Mart exclusive, but I did manage to find one. Let’s see if this figure can live up to Sherri’s nickname.

Packaging:  I like the white and red package scheme for the Elite line. Black was becoming an overdone package color for too many lines and the white stands out on the pegs.

Sherri’s pose tends to draw attention to the fact she’s smaller than the guys and doesn’t come loaded with accessories. The package art has this odd heavily photoshopped look to it and it seems like Mattel has a surprisingly hard time finding reference pictures of 80s era wrestlers.

The bio is brief, but does a nice job of summarizing her career as a wrestler and a manager. Seeing her reign as AWA Women’s Champ was unexpected and a nice touch.

Likeness:  The tricky thing for Mattel here was deciding on the best expression for Sherri. She was an animated valet/manager and was constantly shrieking and coming off unhinged. Ultimately, Mattel opted for a more serene calm expression. Not a bad way to go since this works for Sherri in her more calculated mode. 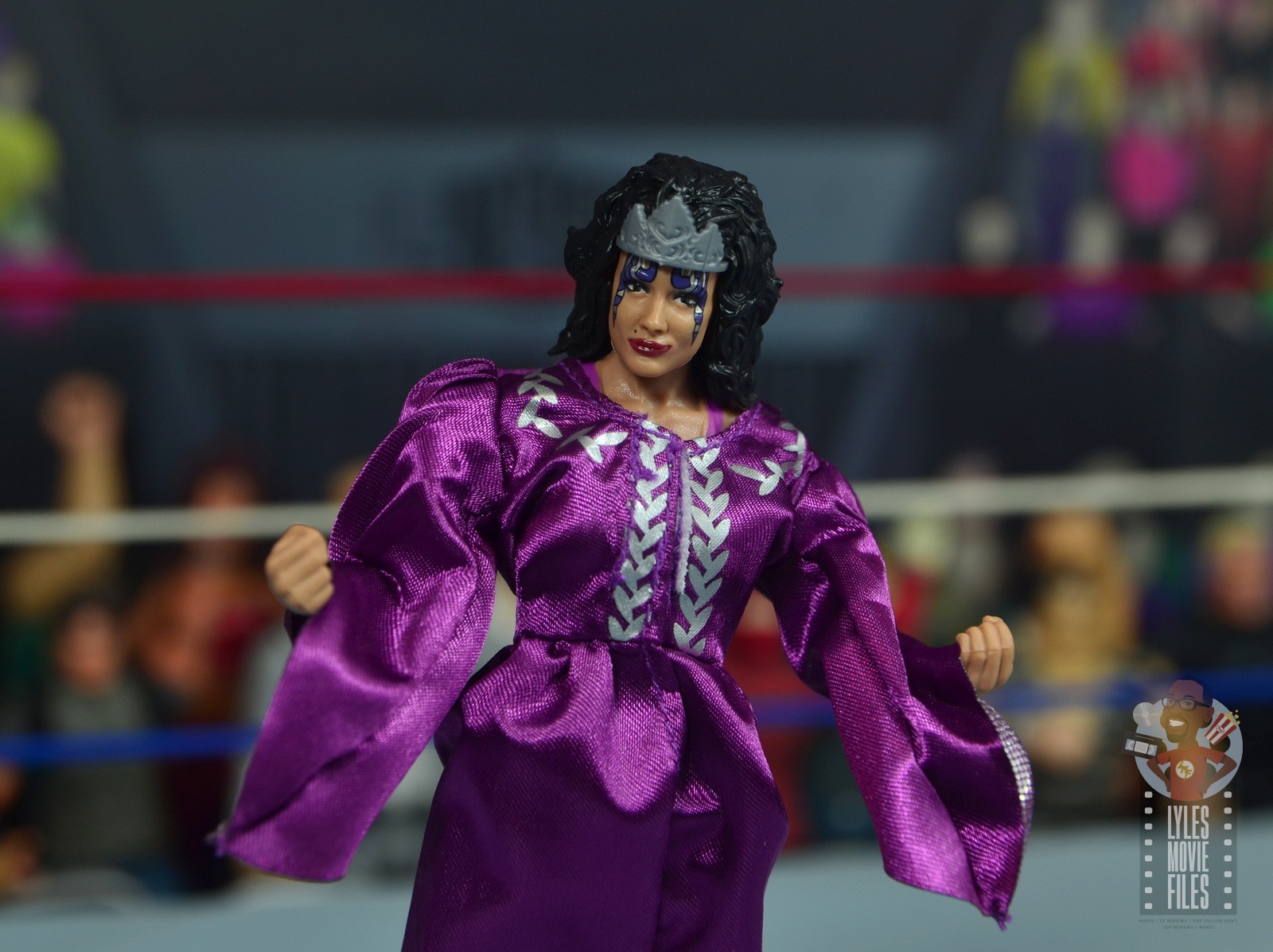 Mattel did a pretty good job capturing Sherri’s poofier 80s hair. Naturally the tiara she wore doesn’t have the cuts and holes like her authentic version, but with a steady hand and a thin black marker it might be possible to bring out more of the detail. Mattel did get the overall look of it down impressively though.

Jakks made a terrific Sherri around her time managing Shawn Michaels so it’s nice to have a figure that compliments that one from another era. Sherri was around long enough that I wouldn’t complain about having all of her notable looks from the guys she managed. 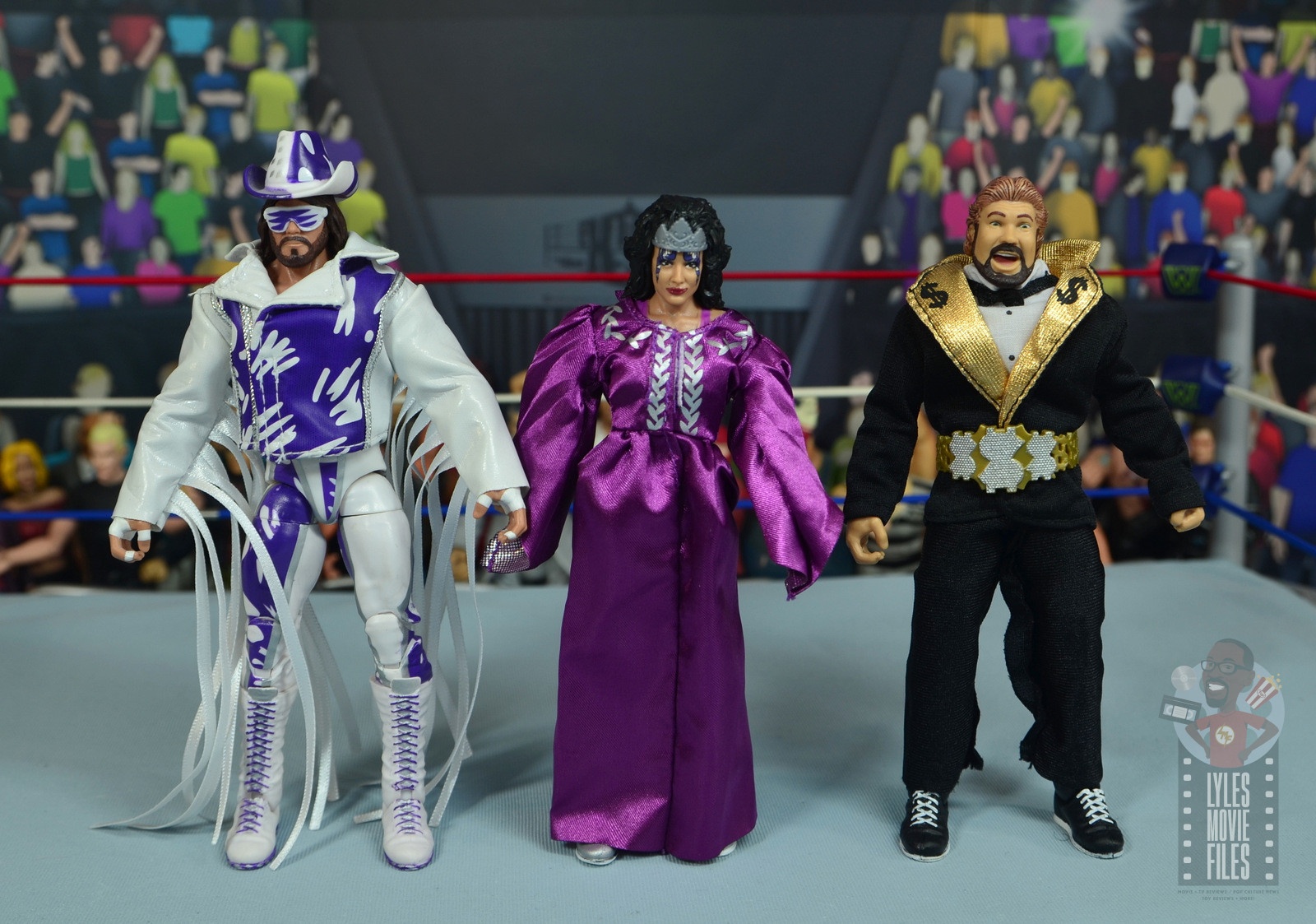 Scale:  At 5’7” Sherri wasn’t short and could look some male wrestlers eye to eye. She normally sided with guys taller like the 6’1” Macho Man and Ric Flair. The figure captures that scale properly. 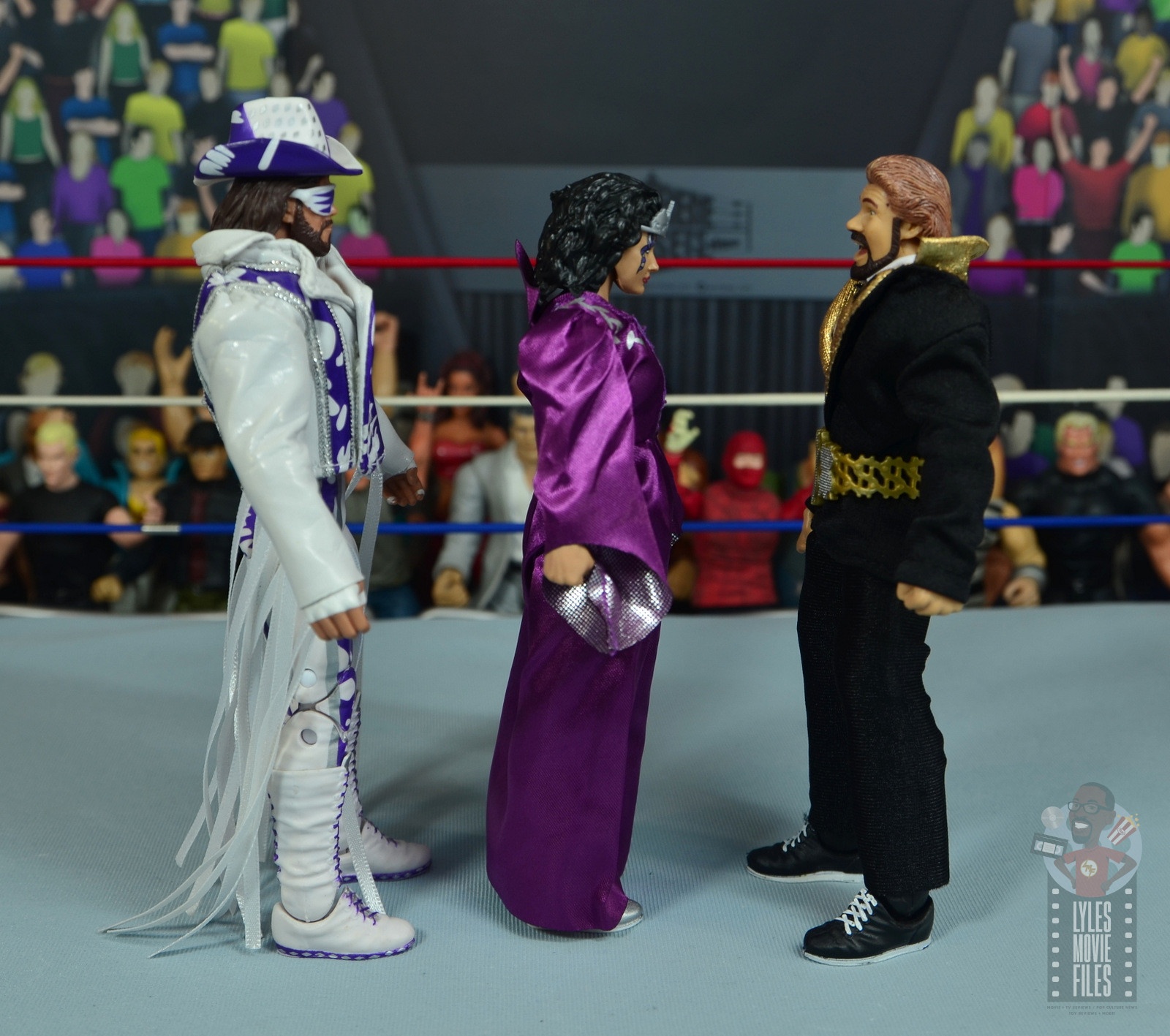 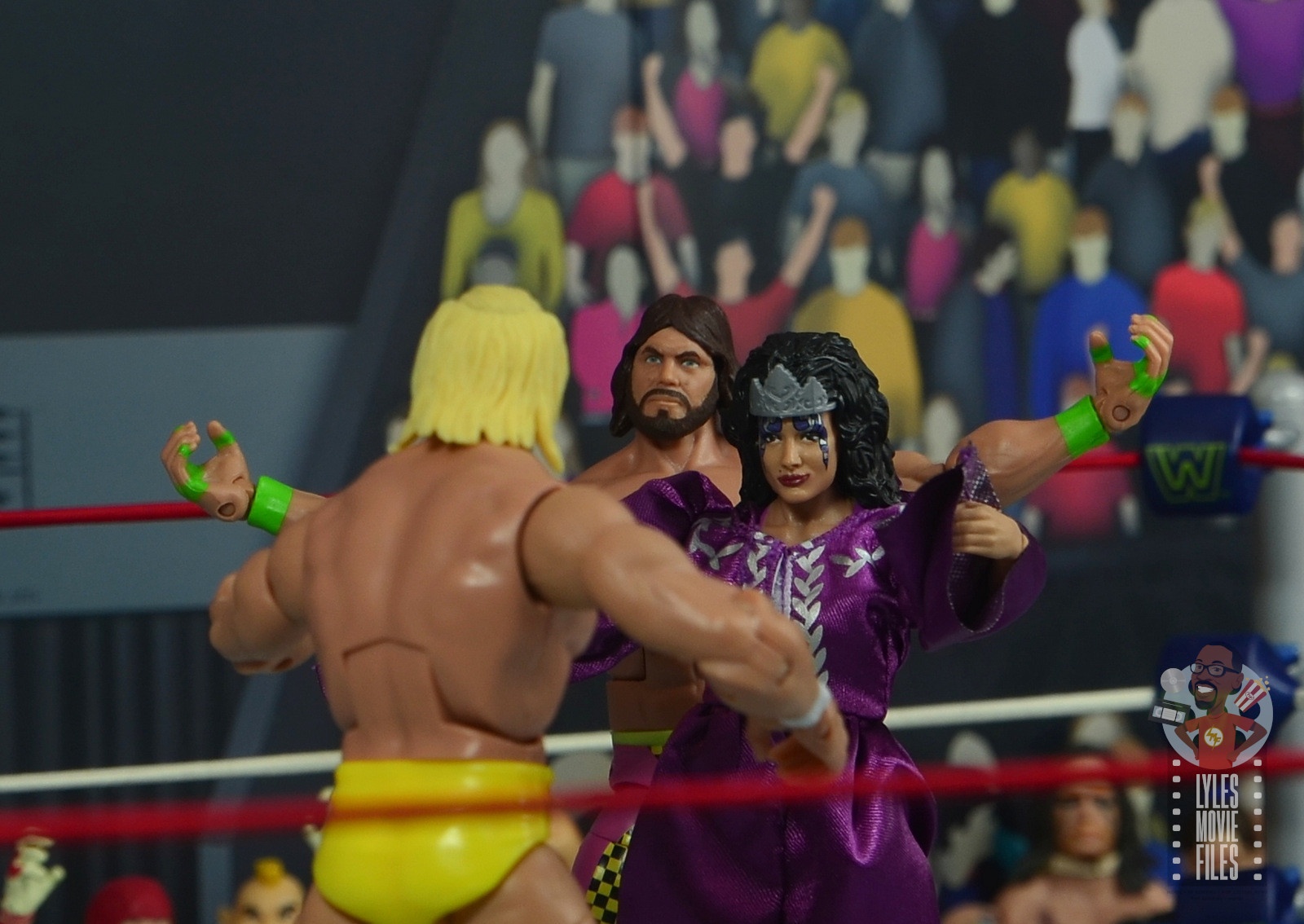 Paint:  Sensational Sherri wore intricate face paint and was one of the first female wrestlers in the US to change her look consistently. Mattel went with a more restrained face paint, which was the smart way to go since this is her first figure.  The purple around Sherri’s legs needed another coat or two of paint as the black is bleeding through however.

As usual for Mattel female figures, there’s some shortcuts with the bra mold that gets painted over in hopes collectors won’t notice it. It always looks weird. There’s some nice detailing on her ring attire with the rhinestones on the neckline, the straps and bow in the back, but these are elements that would look so much better if they were sculpted. 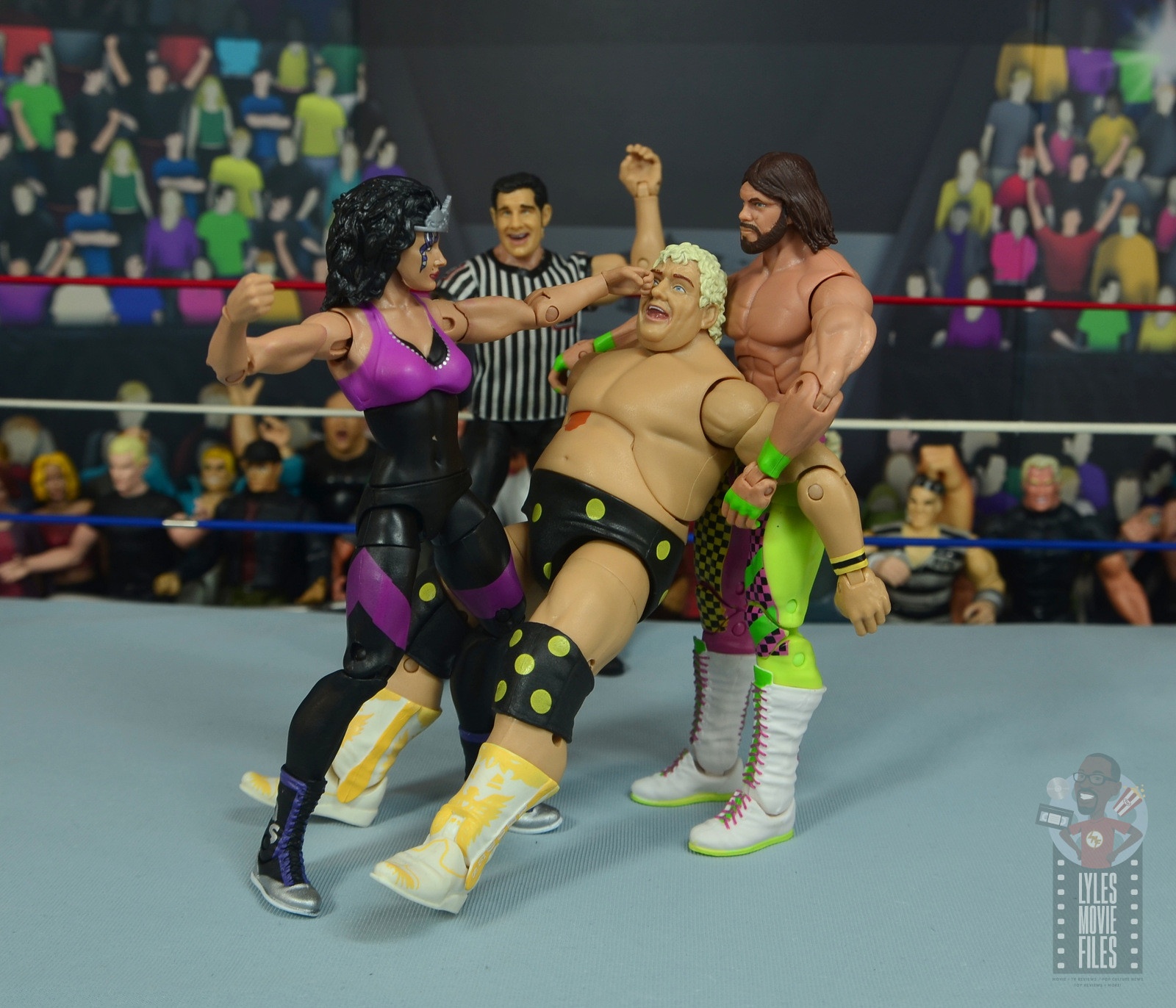 Articulation:  Sherri has all of the normal issues of the standard female Elite figure with the single-jointed knees and elbows that greatly limit her range of movement. In Sherri’s case that’s not too big a deal since you wouldn’t have her trying figure fours or sleeper holds anyway. 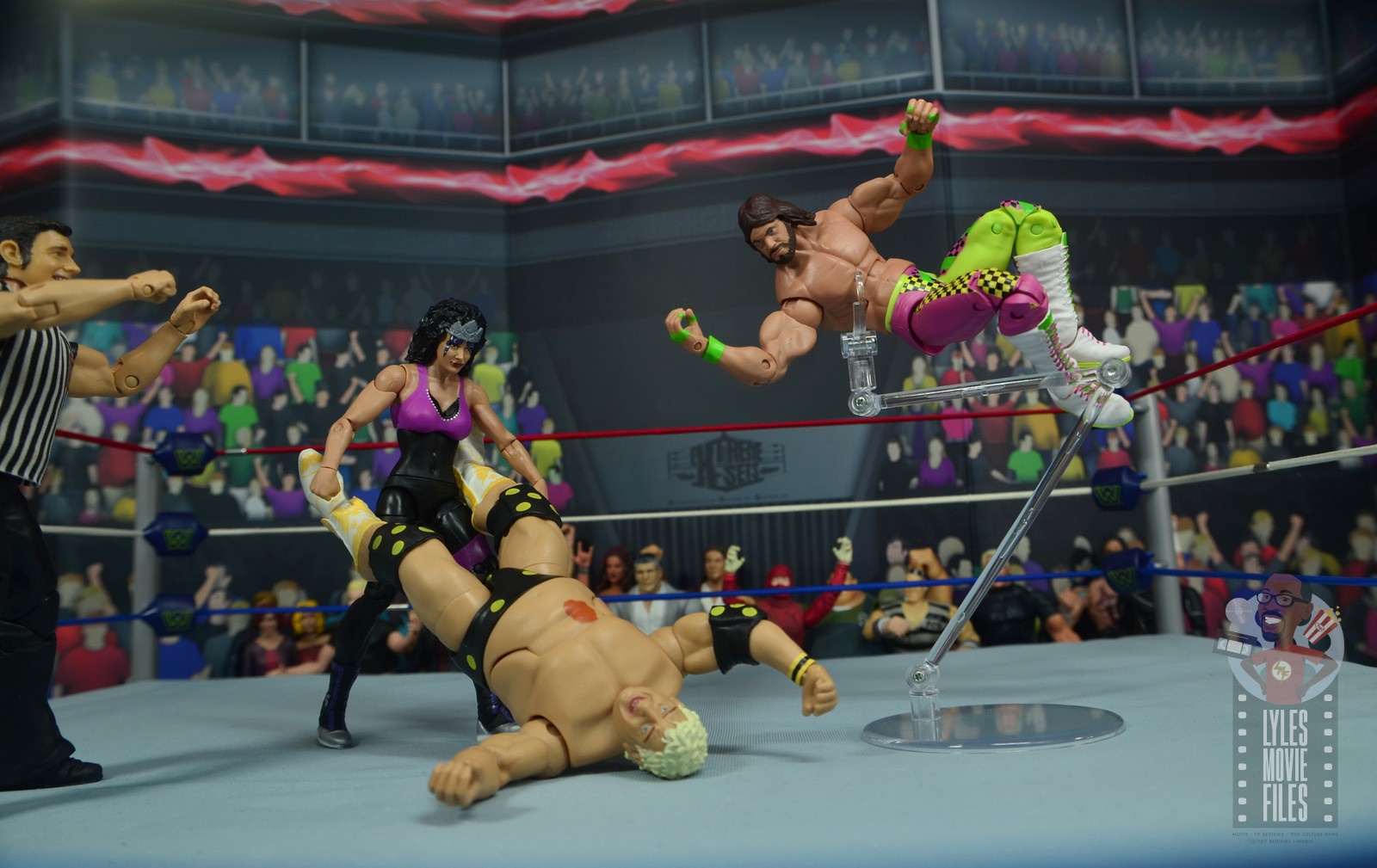 I do find it hilarious that Sherri has two fists for a change when she was a character who would frequently slap male wrestlers from the outside. 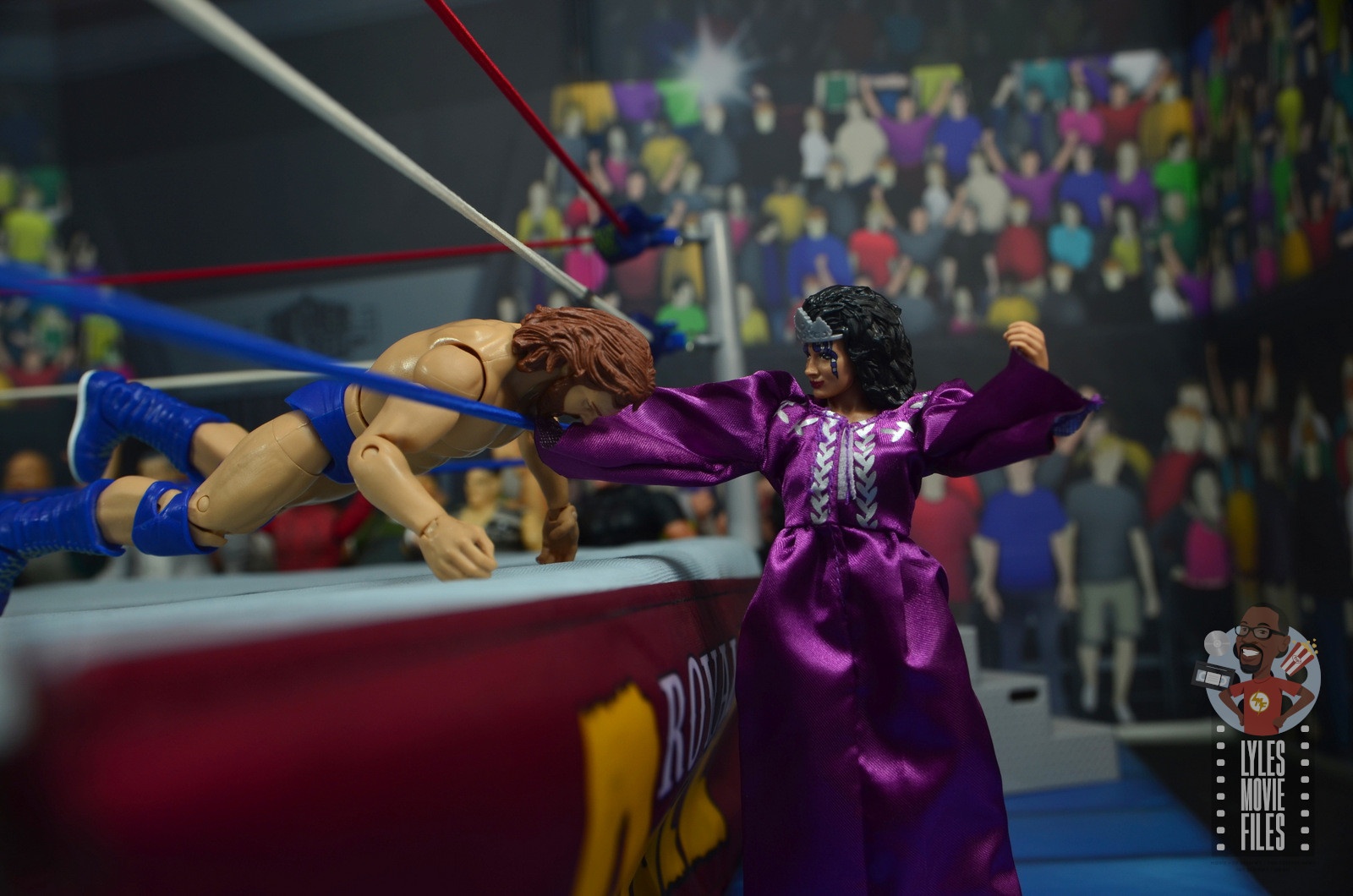 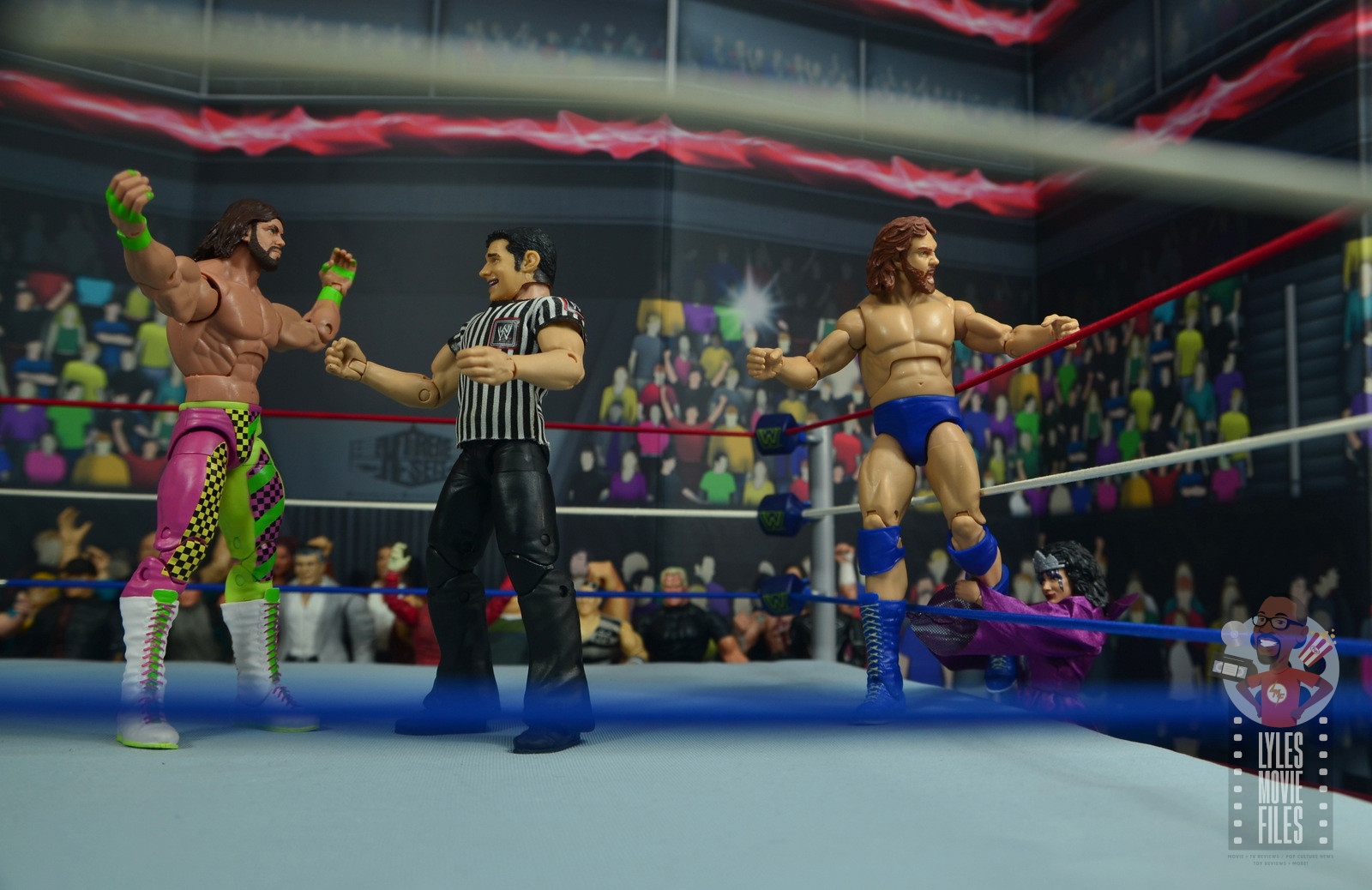 Accessories:  Sherri comes with one accessory, but it’s a pretty major one with her queen gown. This is similar to her attire at the peak of Randy Savage’s Macho King run. The gown fits pretty well and had some modest, but nicely applied detailing around the shoulders and the front.

Flip the back portion of the gown up to reveal a collar that really gives Sherri a Queen-like appearance. It’s a nicely done accessory making for an almost perfect two in one figure. If only the tiara were removable. 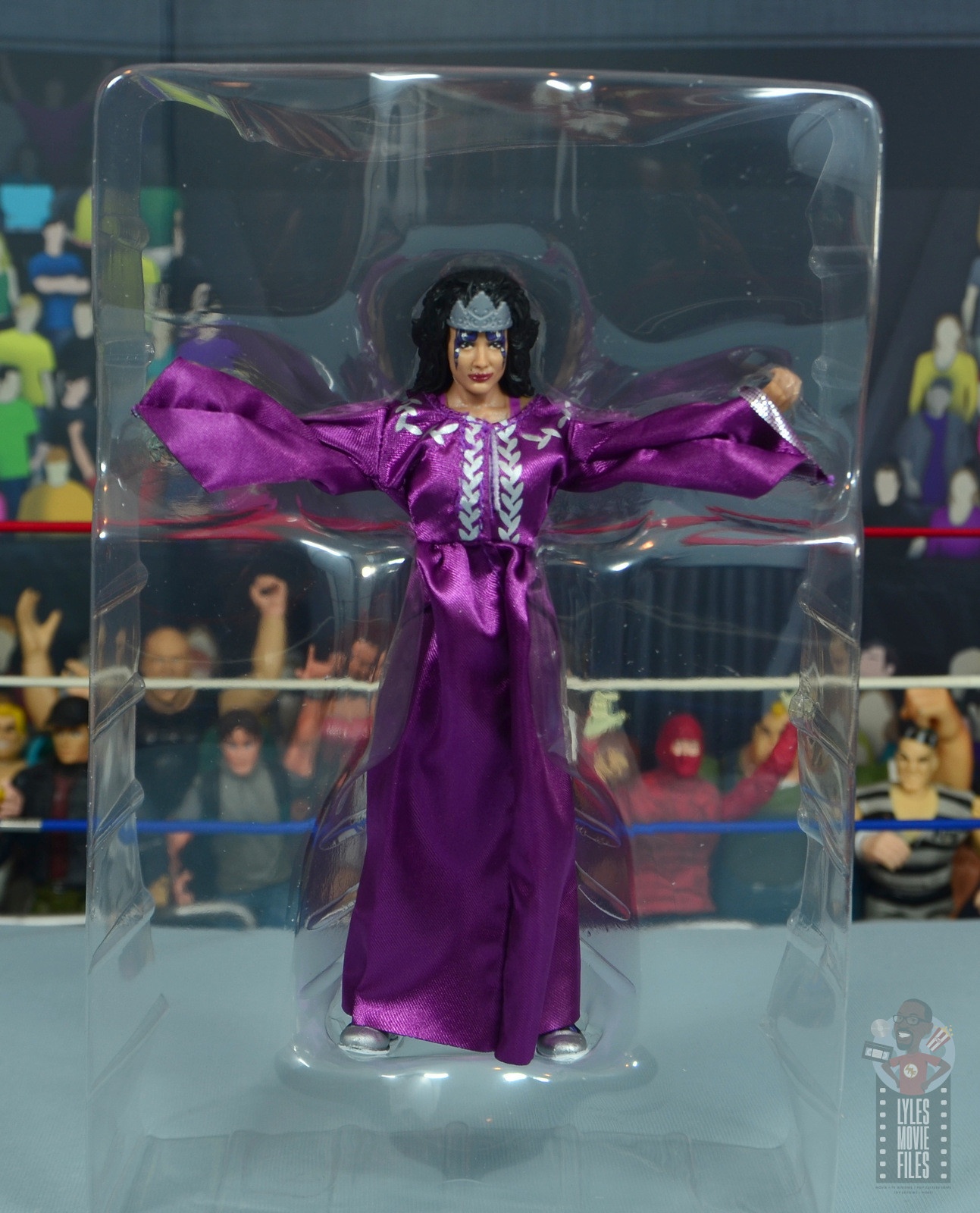 Worth it?  Sherri is $20 if you find her in stores. That might be easier said than done, but I could see paying upwards of $10 more for her. 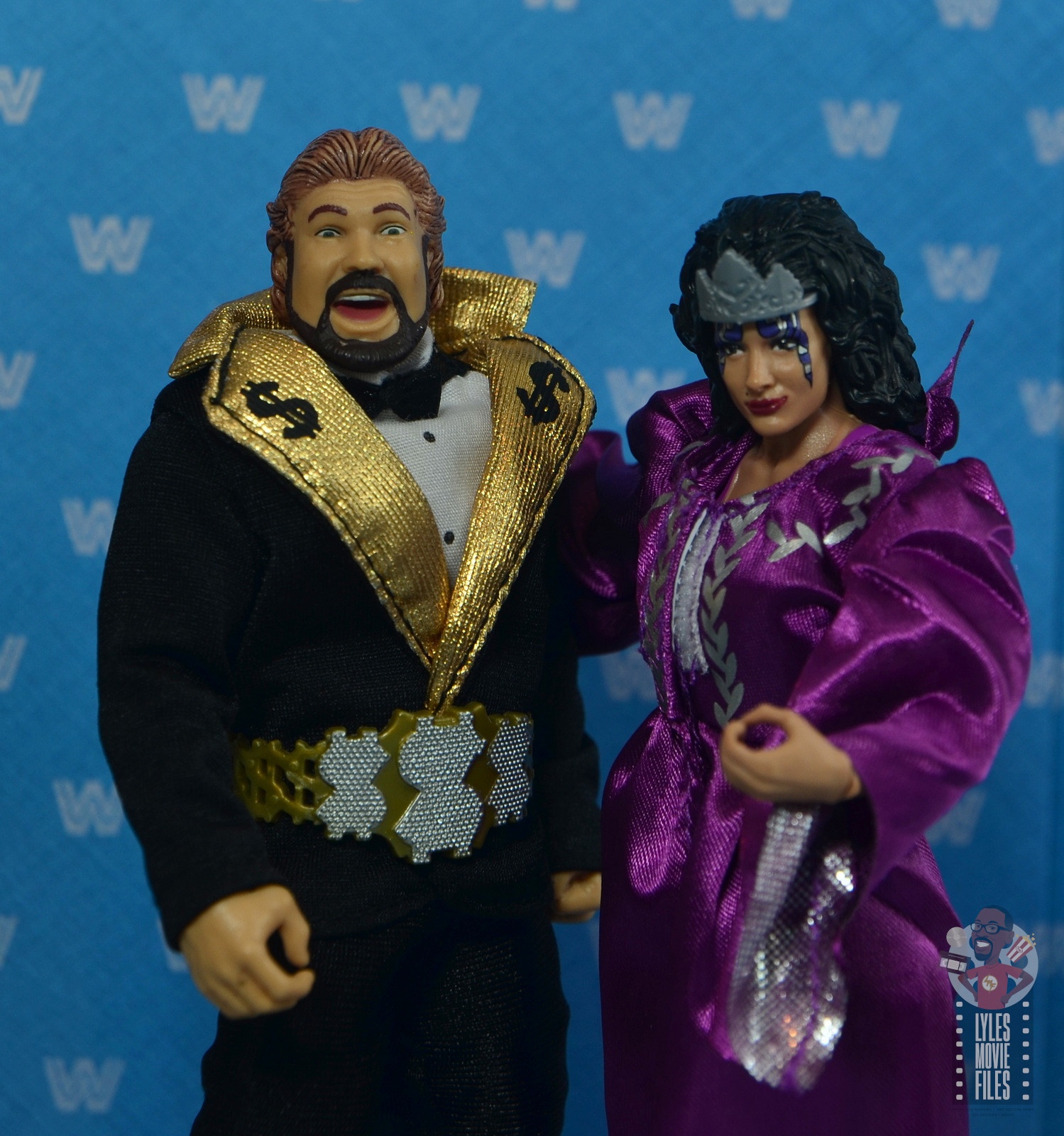 I’m really happy Mattel took a shot at Sensational Sherri. This is a terrific version of Queen Sherri and a figure worth tracking down despite the likely frustration of finding her at Wal-Mart. 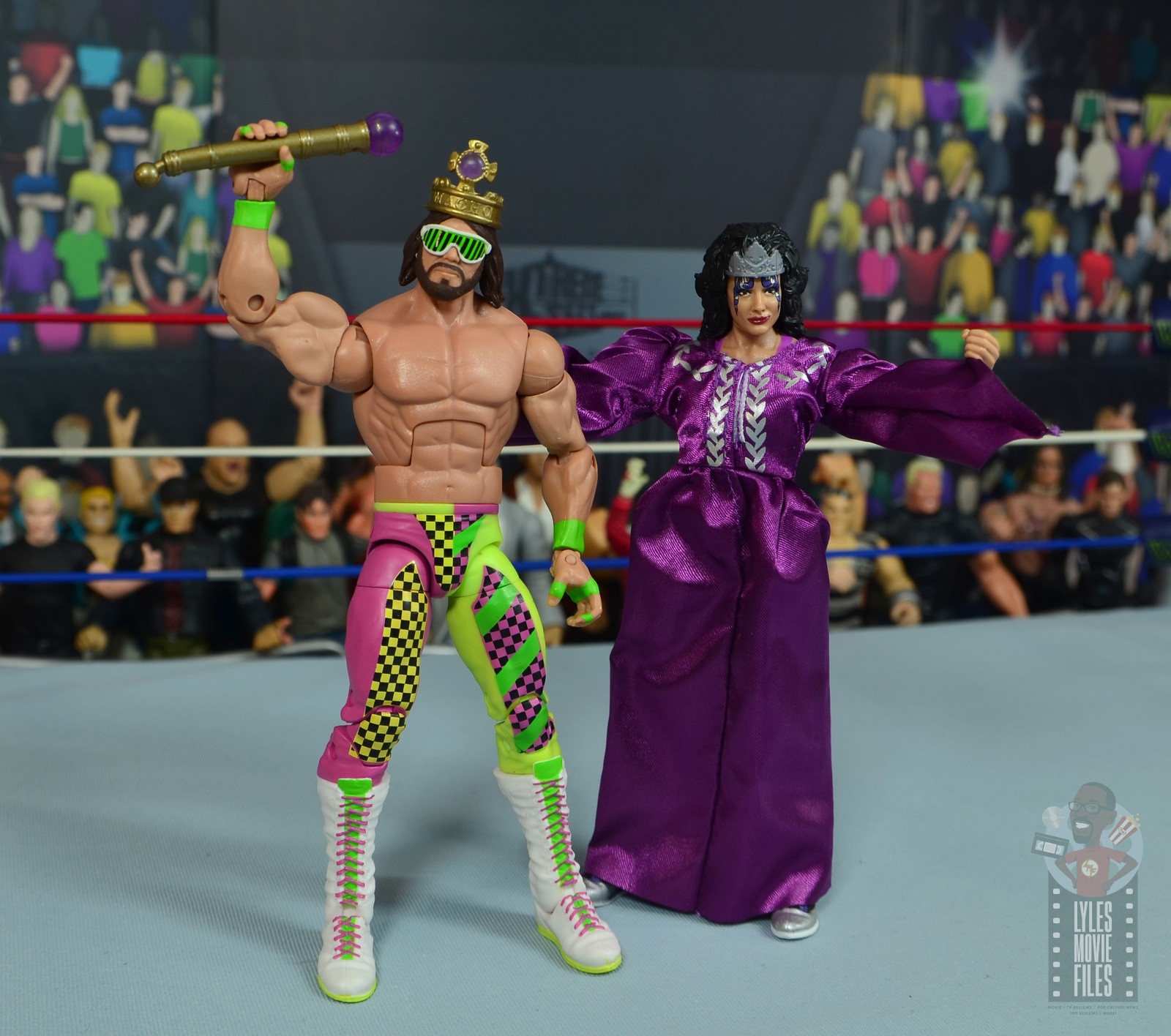 Where to get it?  Sensational Sherri is a Wal-Mart exclusive so stalk those stores. I’ve seen her twice so it might be easier finding her than some other flashbacks. If you strike out there you can always go the Amazon.com route.