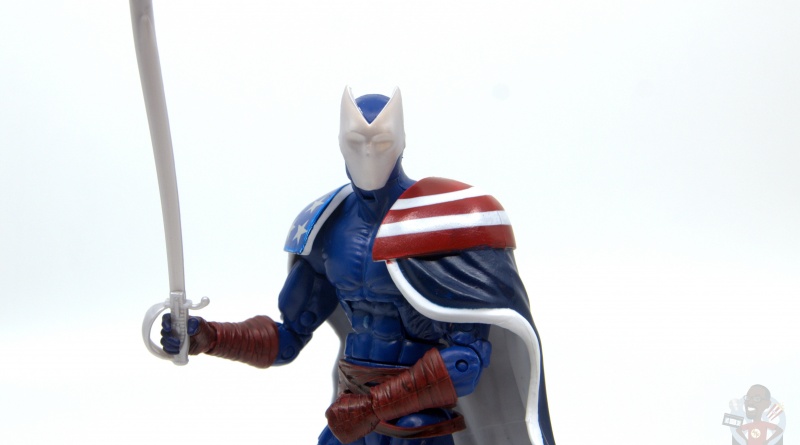 Thunderbolts was such an amazing concept. When the Avengers and Fantastic 4 were presumed dead, new heroes had to step up. Among them was The Thunderbolts — a team of heroes who were anything but. Baron Zemo led this squad as Citizen V as his means of tarnishing the legacy of the Avengers. In the 90s, I was all about the Thunderbolts and New Warriors so getting Marvel Legends of those figures is speaking directly to my teen years.

Citizen V couldn’t be delayed too long in building the OG Thunderbolts. We’ve already gotten Songbird and their leader was a smart choice for the next addition. Let’s see how Herr V measures up.

Packaging:   Nothing new with the packaging although Citizen V gets his own logo, which is kinda impressive. The portrait on the sides and the rear of the package subtly plays up the V with the sword positioned in a mysterious manner to help conceal the identity. 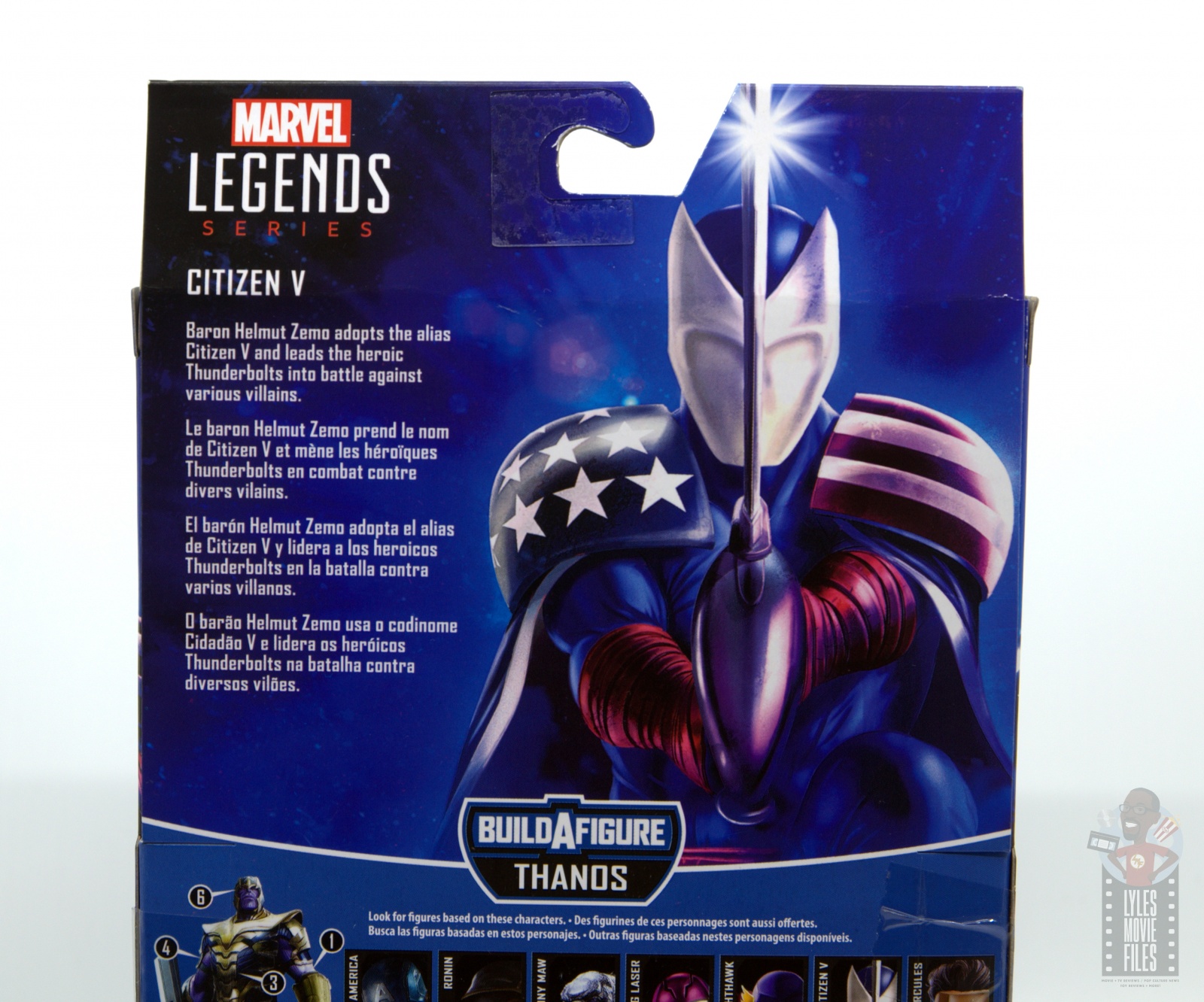 I was gonna write the review vague, but the bio spoils it so there was no need to maintain the charade on my end either. This was an effective bio and sums up the Thunderbolts well besides that pesky mention of them being heroic. 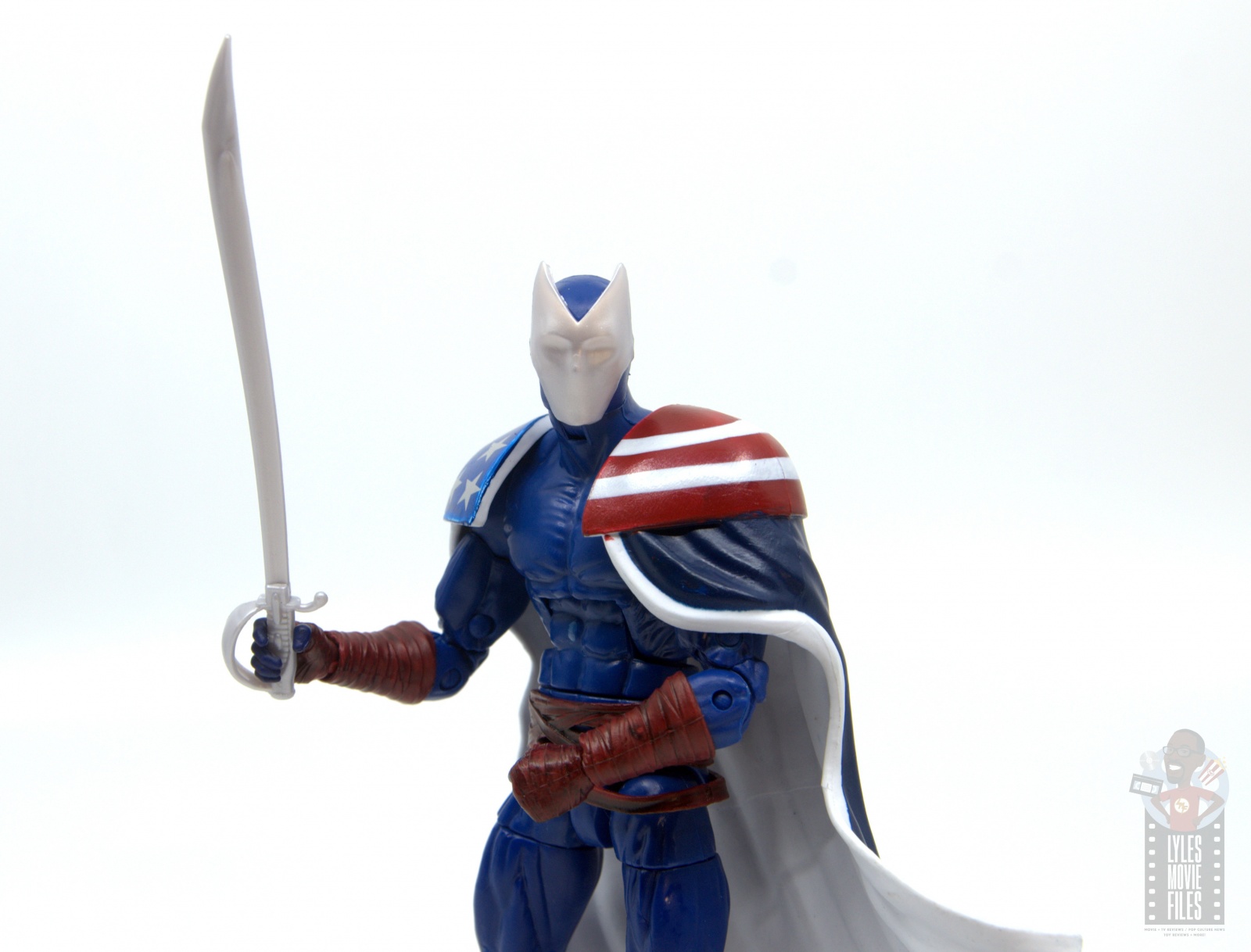 Likeness:  Hasbro reused the recent Daredevil mold, which covered most of Citizen V’s design elements. It’s the best base if Hasbro wasn’t going to make a 100% dedicated sculpt to better show the poofy sleeves and baggy pants. It was the 90s…

The signature elements of the outfit — the V mask with eye indention and the flag–inspired cape and wraps around the wrists — came out nicely. For a fully accurate look, Hasbro should have gone with wraps around the shins as well. 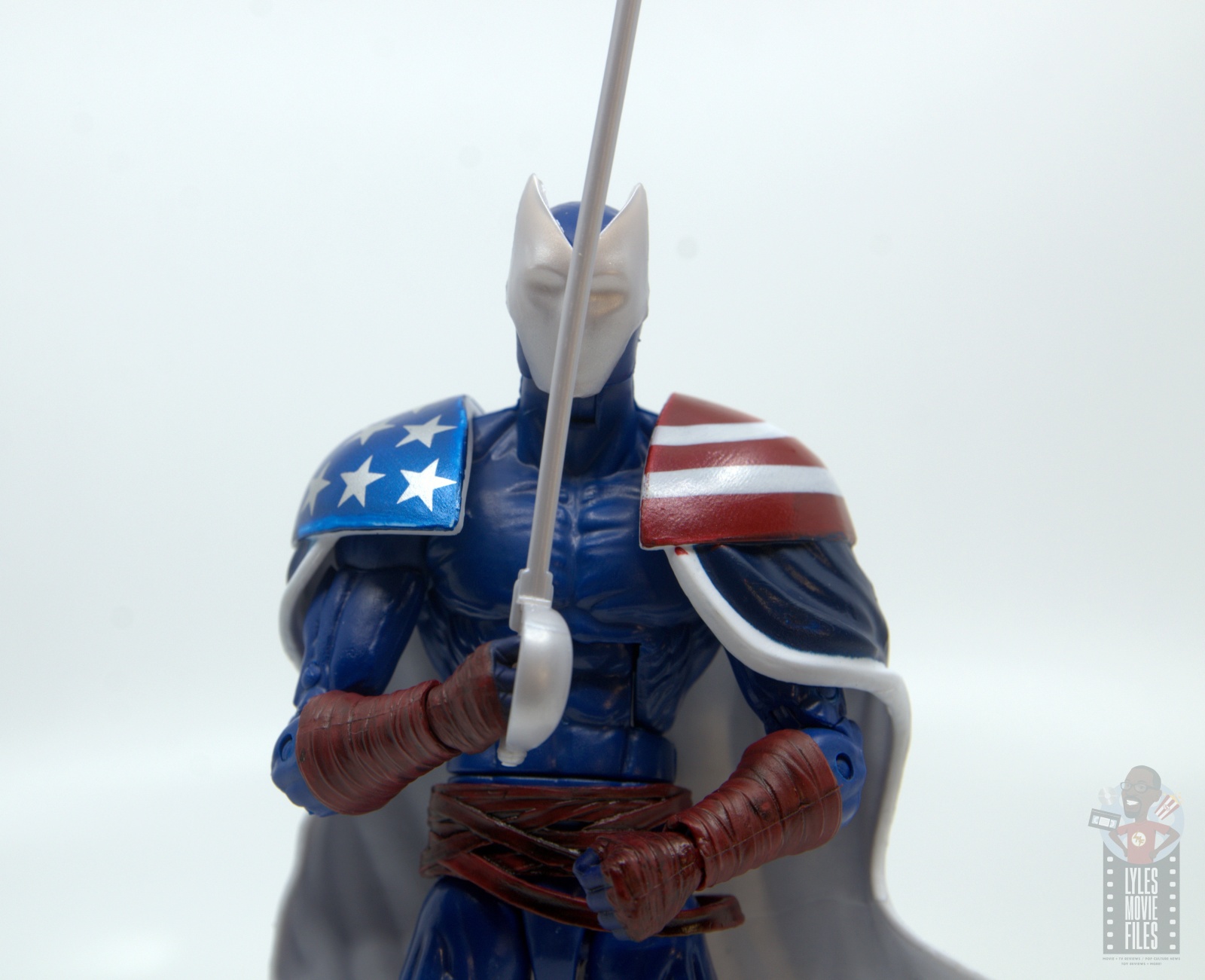 I like how the cape was handled as Citizen V frequently was portrayed with it billowing behind him.

Paint:  The paintwork is decent — I just had a little red overspray and white smearing on the cape section and the blue shoulder pad coverage is lacking on the edges. 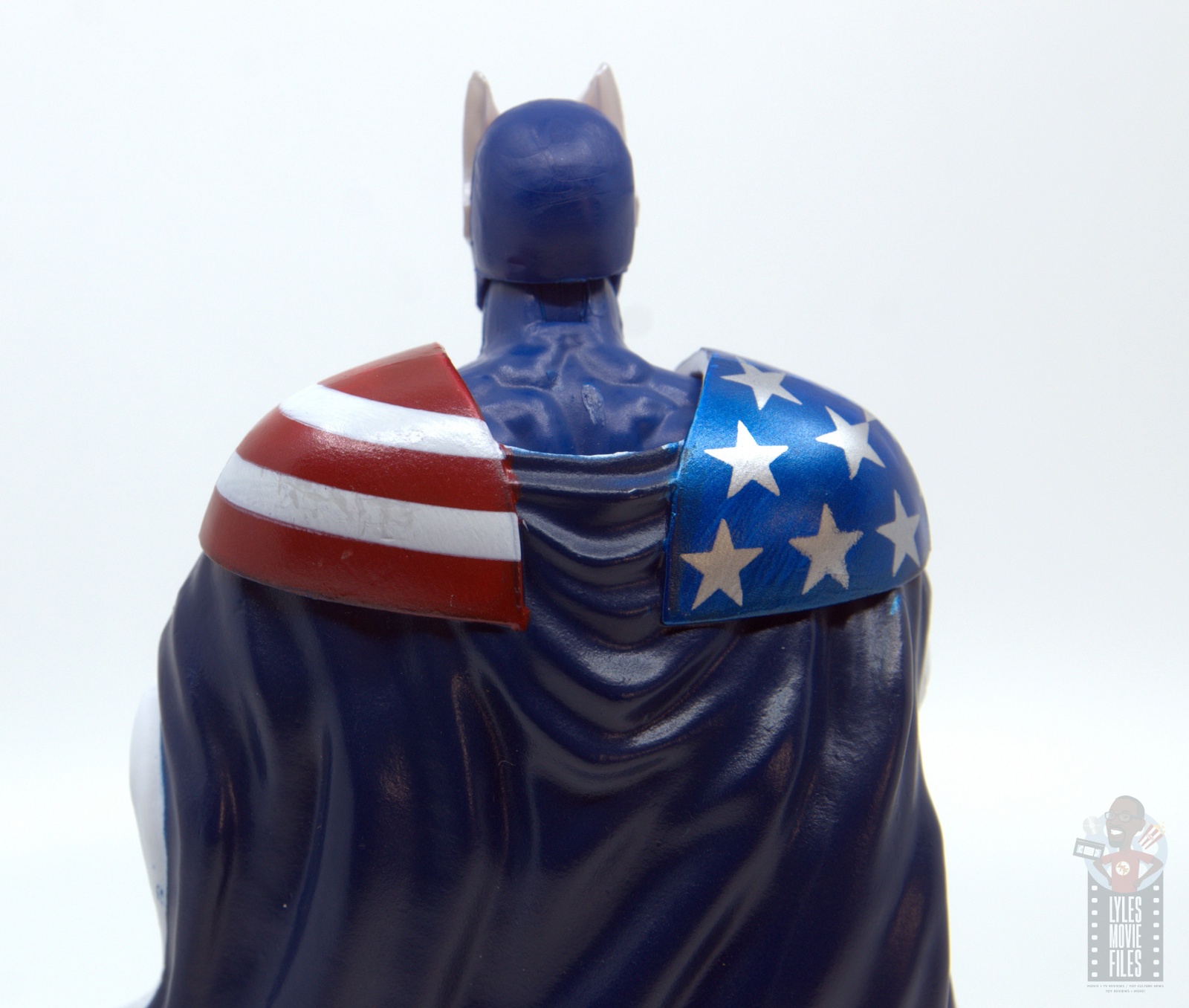 The bigger issue though, depending on your level of concern with the character, is the costume was actually purple and not blue.

That’s important as the purple was a subtle visual clue that Zemo was Citizen V as that was his primary color of his villain outfit. It’s the kind of gaffe Hasbro doesn’t typically make. Is it a big enough deal to ruin the figure? No, but it’s something that really should have been caught in the production phase. 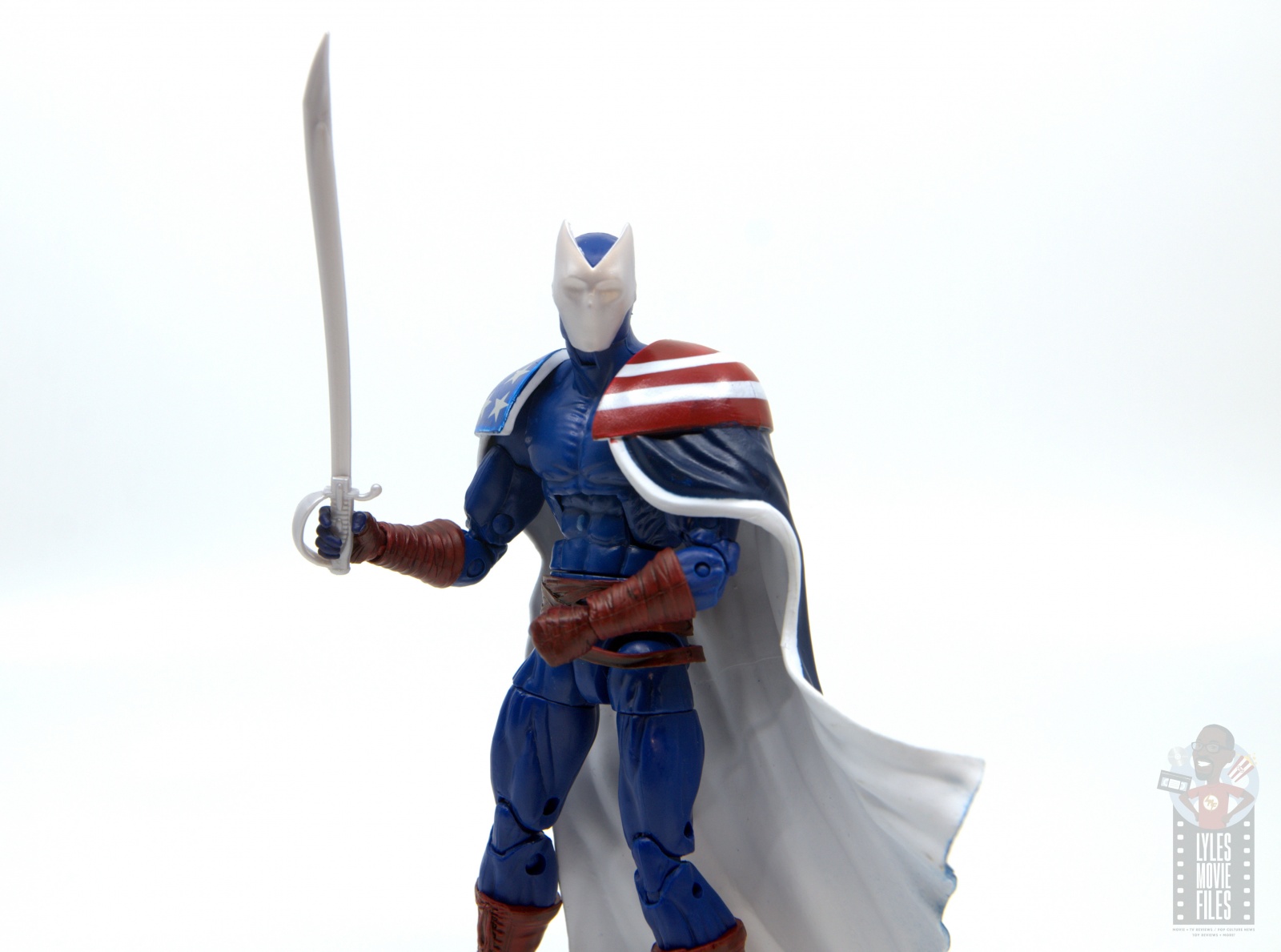 Yeah, there have been other Citizen V since Zemo, but the package specifically refers to this figure as Zemo so with that criteria the blue is incorrect.

Scale:  The Daredevil body was the right choice for Zemo as it gives him some size while not resorting to the tried and true Bucky Cap mold. 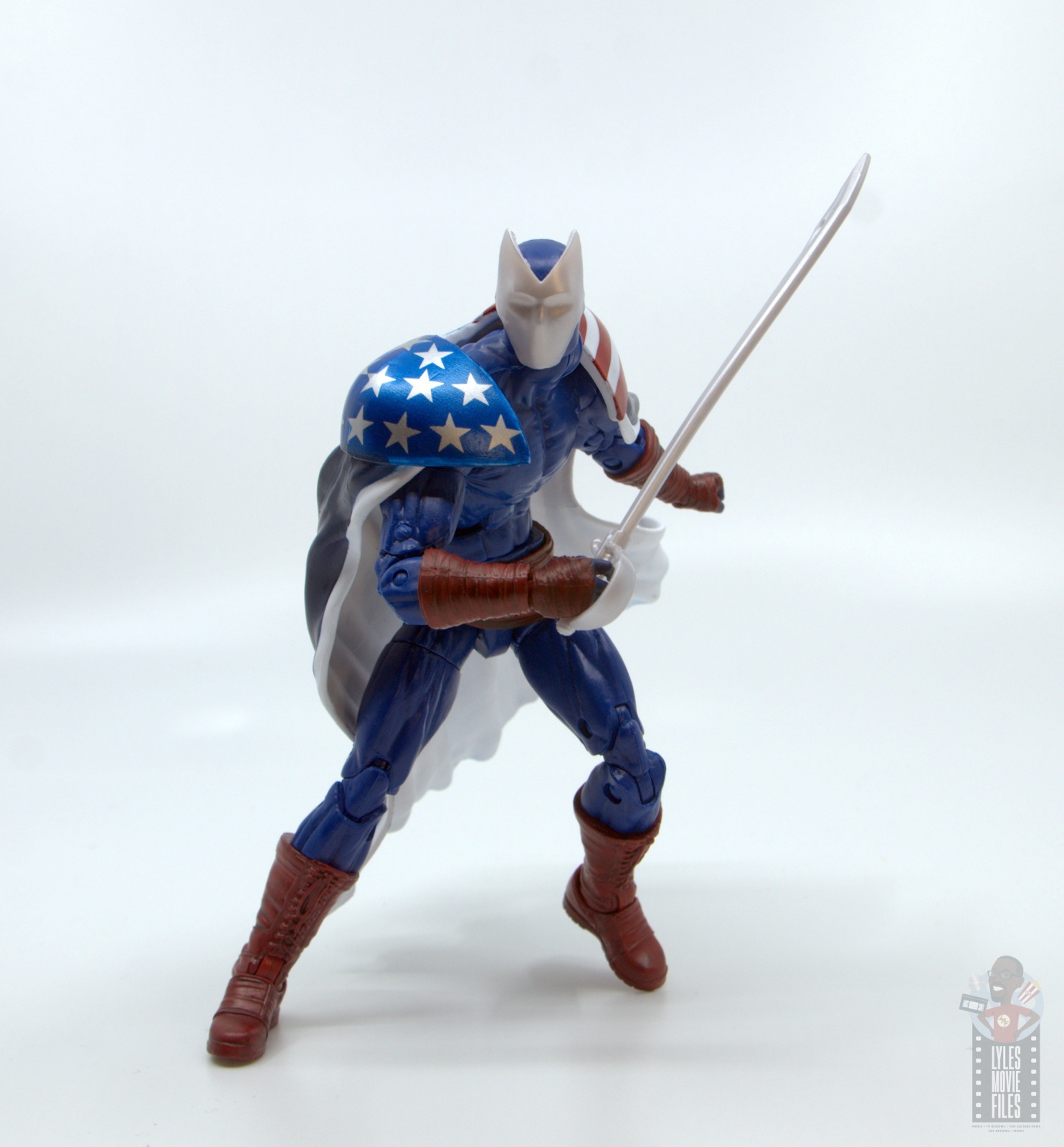 Articulation:  You’ll be able to strike some fun authoritative poses with Citizen V and the flexibility of the shoulder pads ensures some decent movement. Watch the cape though as it can get a little tricky. 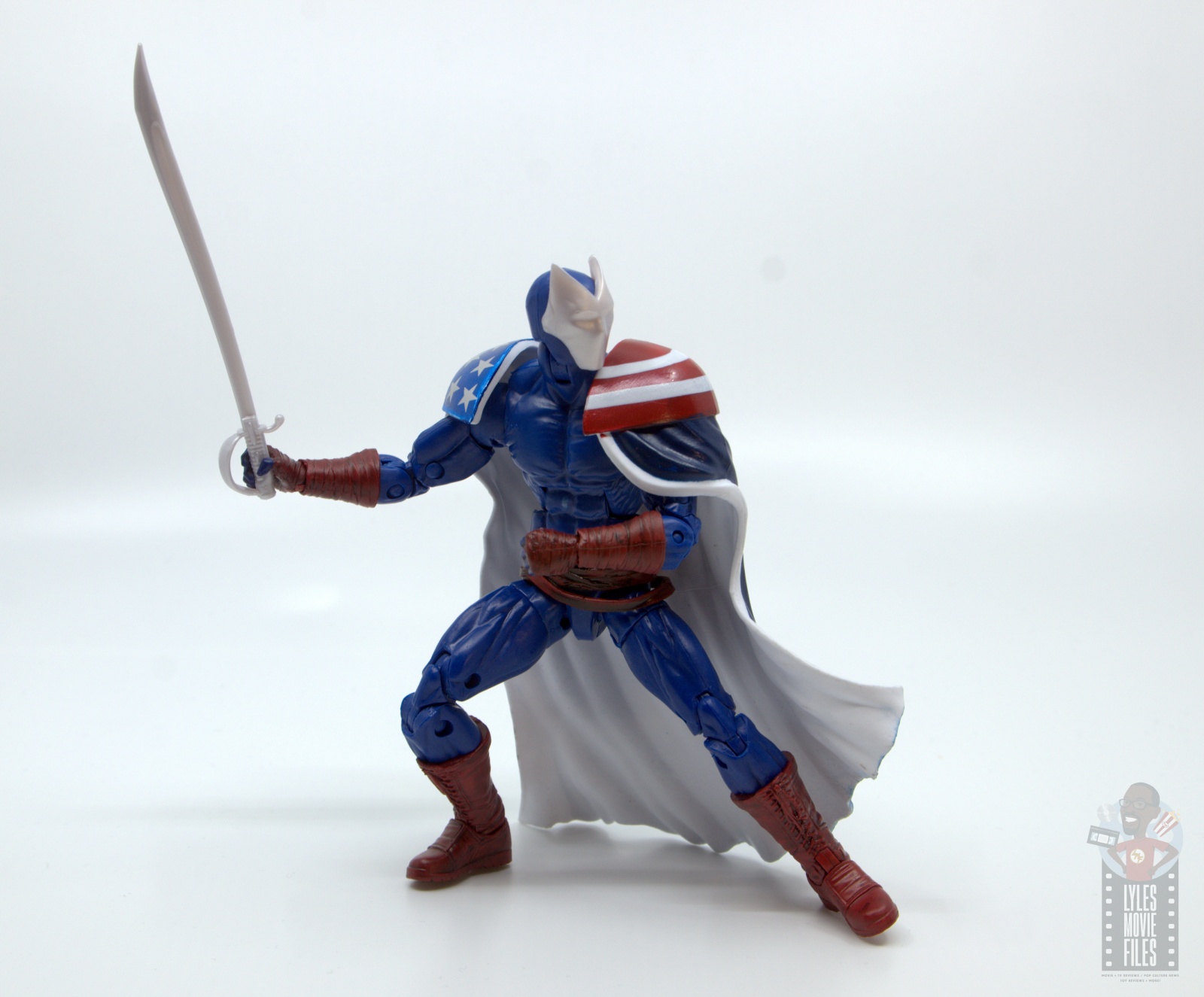 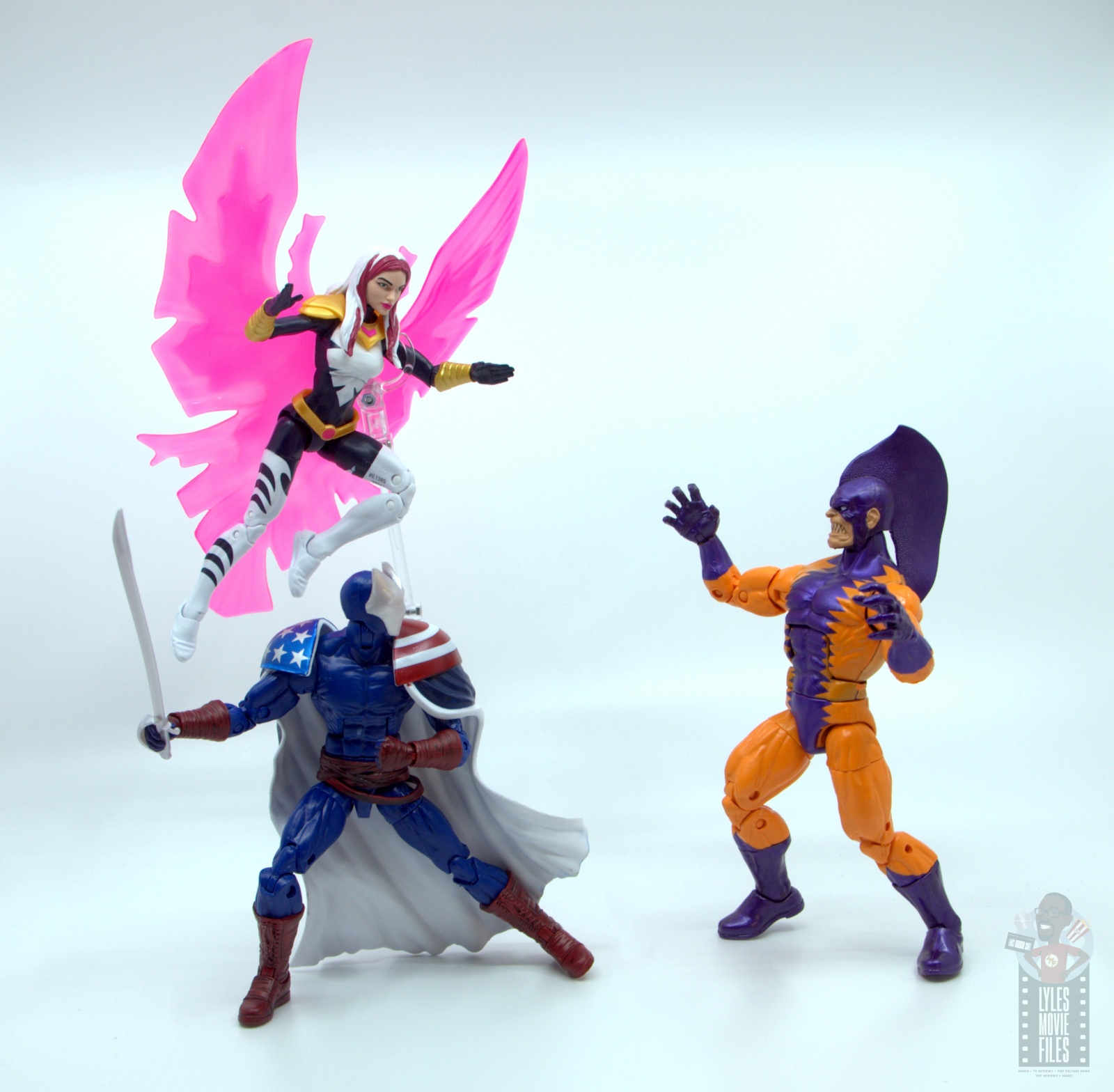 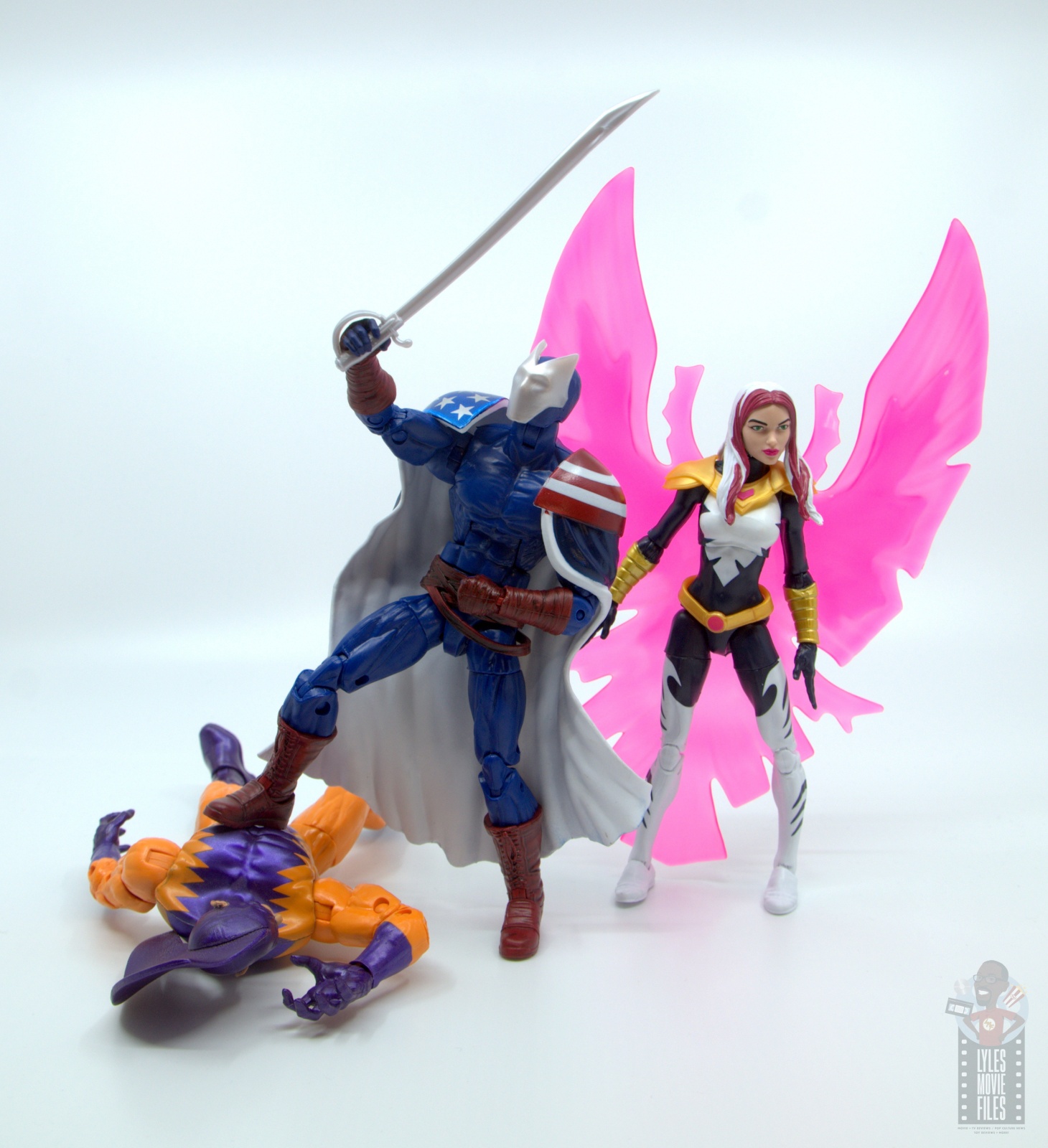 Accessories:  Citizen V comes with his trademark sword. It’s not flashy, but it’s accurate. The comic version didn’t have any color on the hilt either.  I appreciate the length as it allows Citizen V to battle opponents from a distance. 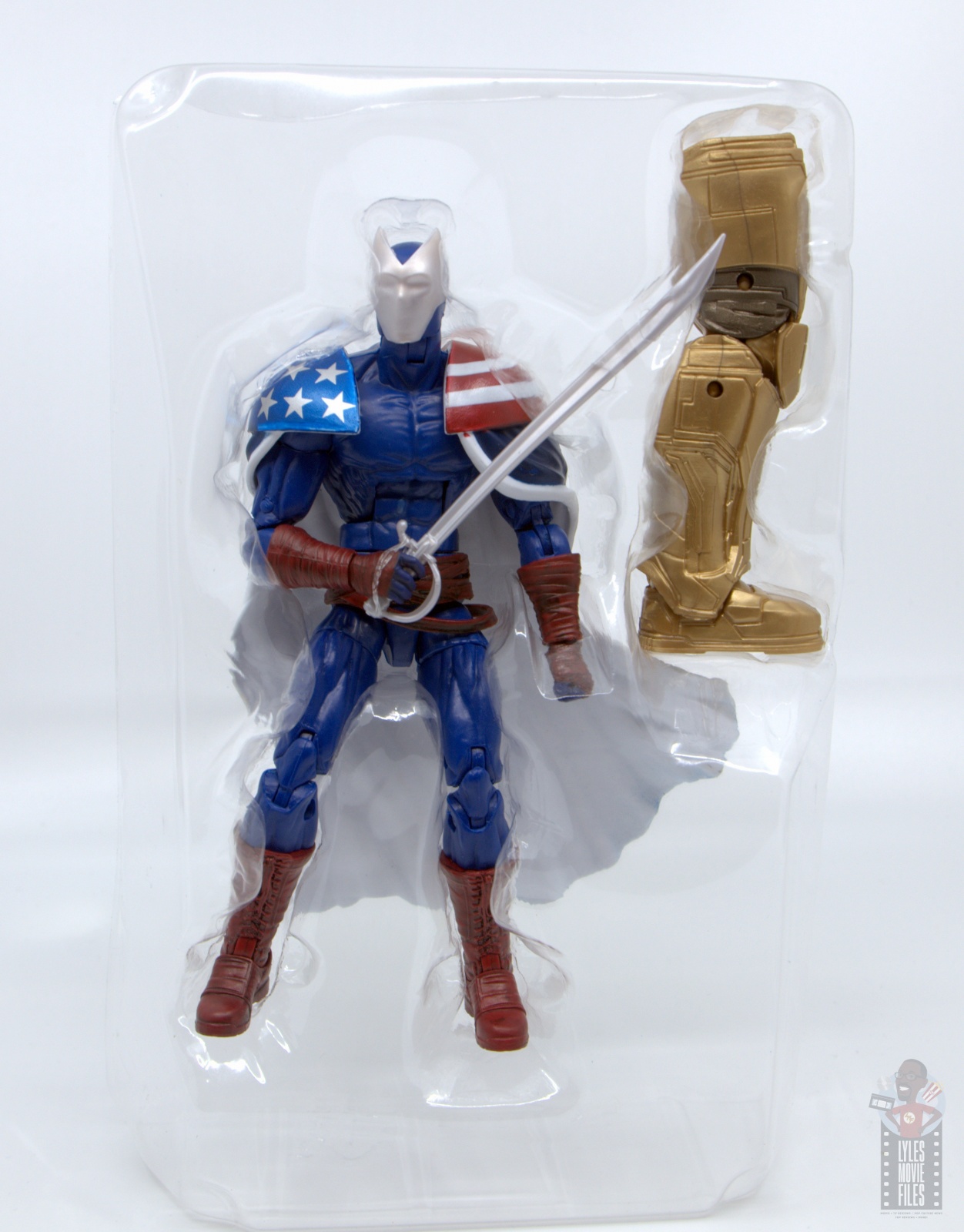 Finally, Citizen V with the right leg of the Build-A-Figure Armored Thanos.

Worth it?  I was able to get Citizen V for just over $17. That’s a fair price for a strong figure whose value will really be appreciated when Hasbro gets around to making more Thunderbolts.

A Citizen V figure is better than none, but it would have been nice to get the accurate colors and some of the details just right. It’s not like he’s going to get numerous figures to perfect it. 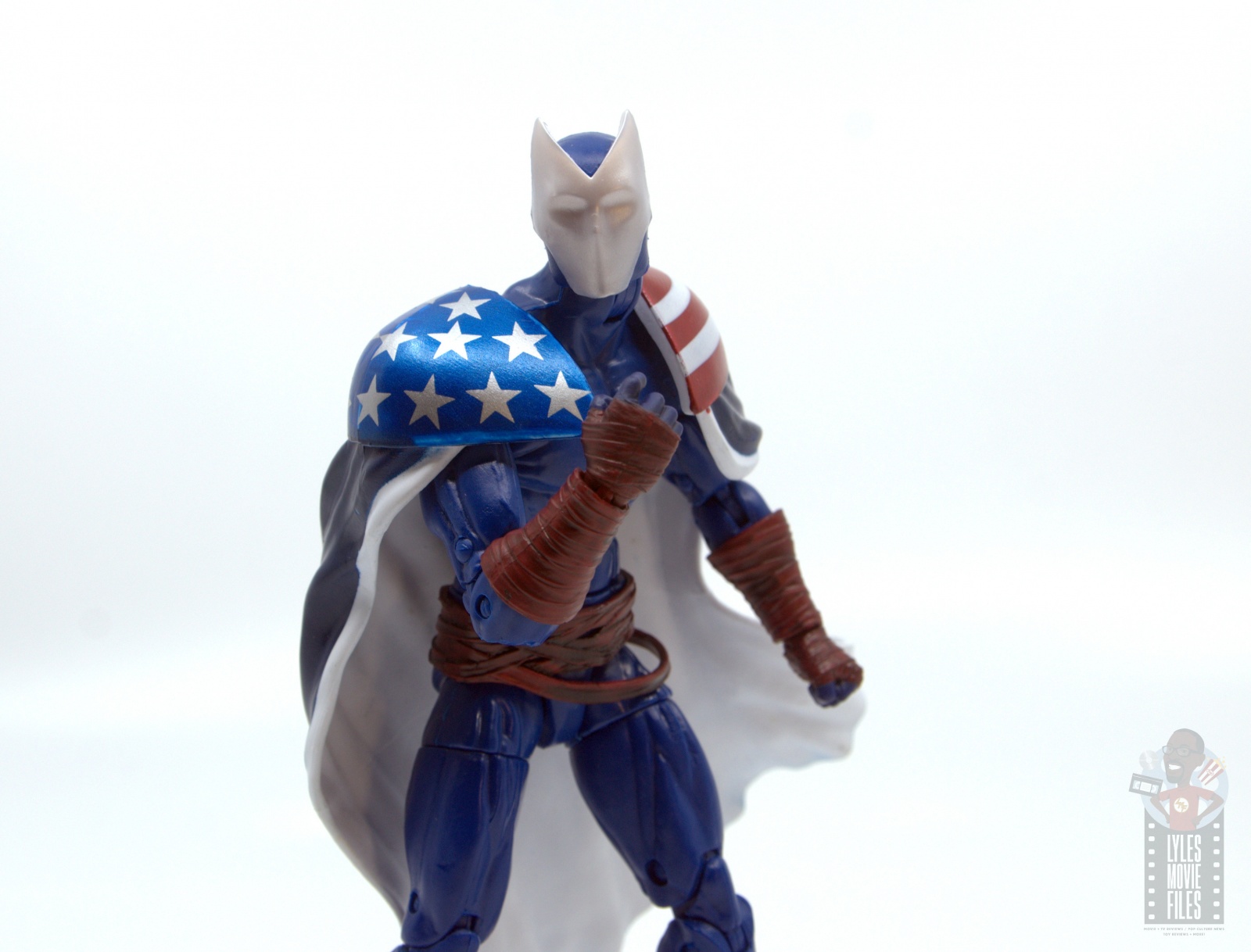 Where to get it?  I got Citizen V from Wal-Mart, but you can also order him from Amazon, Entertainment Earth or Hasbro Pulse.