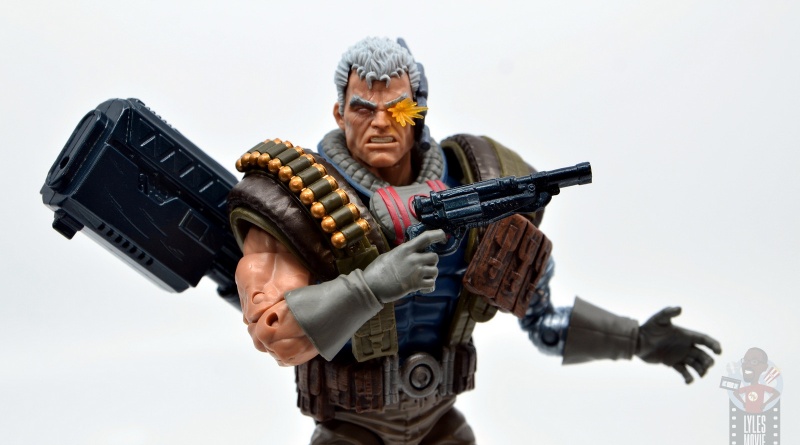 OK, time to go back and start playing a little random catch up on my Marvel Legends. Hasbro already released a very nice modern era Cable figure, but the character has always been one of the prime examples of 90s excess. There’s no better version of Cable then his earlier appearances when he turned the ragtag New Mutants into the assault squad of X-Force.

I don’t mind Hasbro’s approach of doing a relatively more modern version of a character if we continue getting the iconic version done as well as this Cable figure.

Packaging:   Cable is part of the Deadpool wave so the accent color is red instead of the traditional X-Men gold. It is odd that a big player in the X-Men universe like Cable has the Deadpool logo instead of his own. No doubt this was to tie-in to Deadpool 2, which featured Cable so I get it. 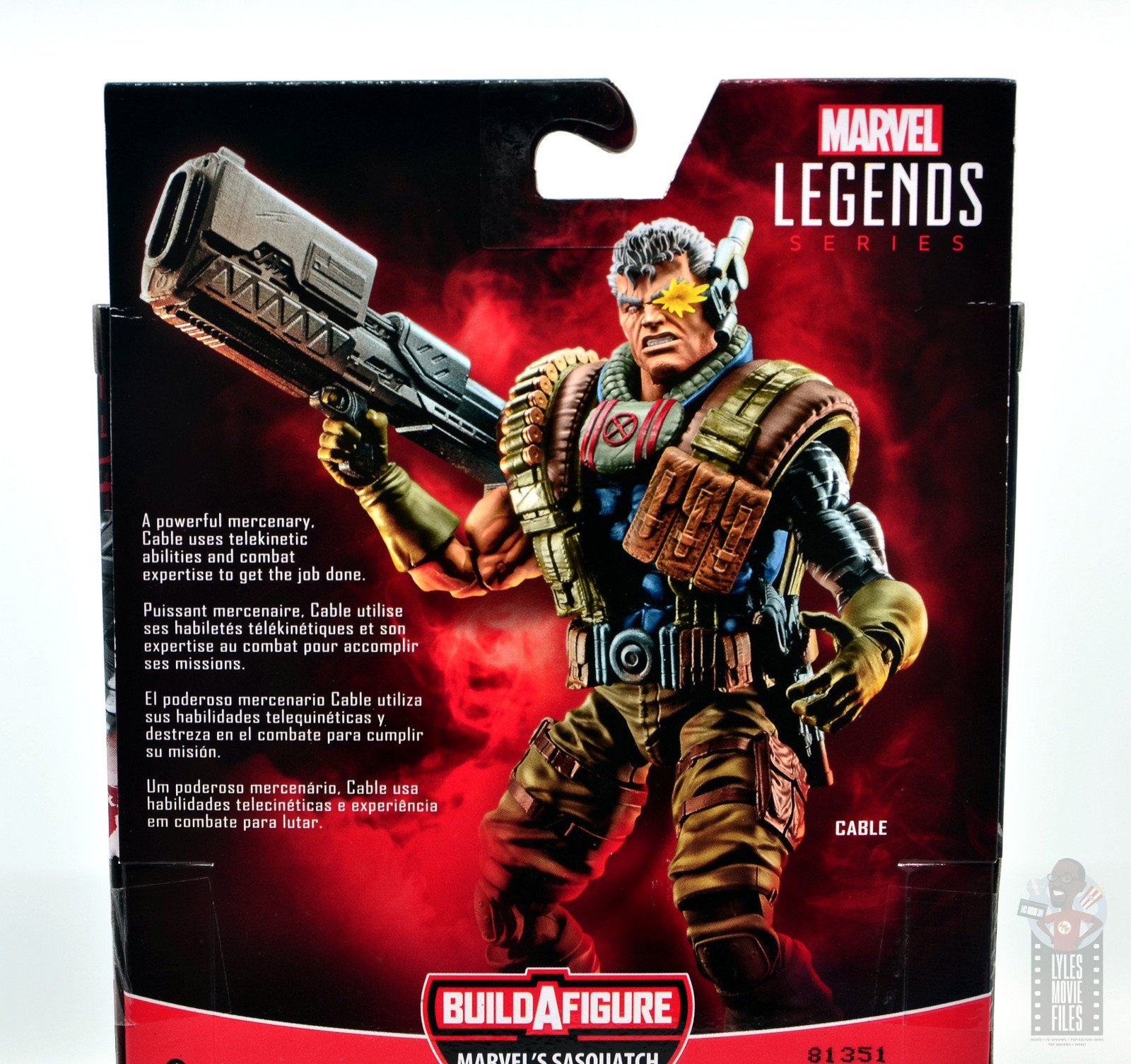 The side package features a cool portrait of Cable while the back shows off the figure. Cable’s bio is weird as it doesn’t mention X-Force or Deadpool giving him a far more generic write-up.

Cable is the wave’s most impressive looking figure from a packaging perspective as there’s not a ton of open space as his weapons, overall bulk and BAF piece give him a stacked presentation. 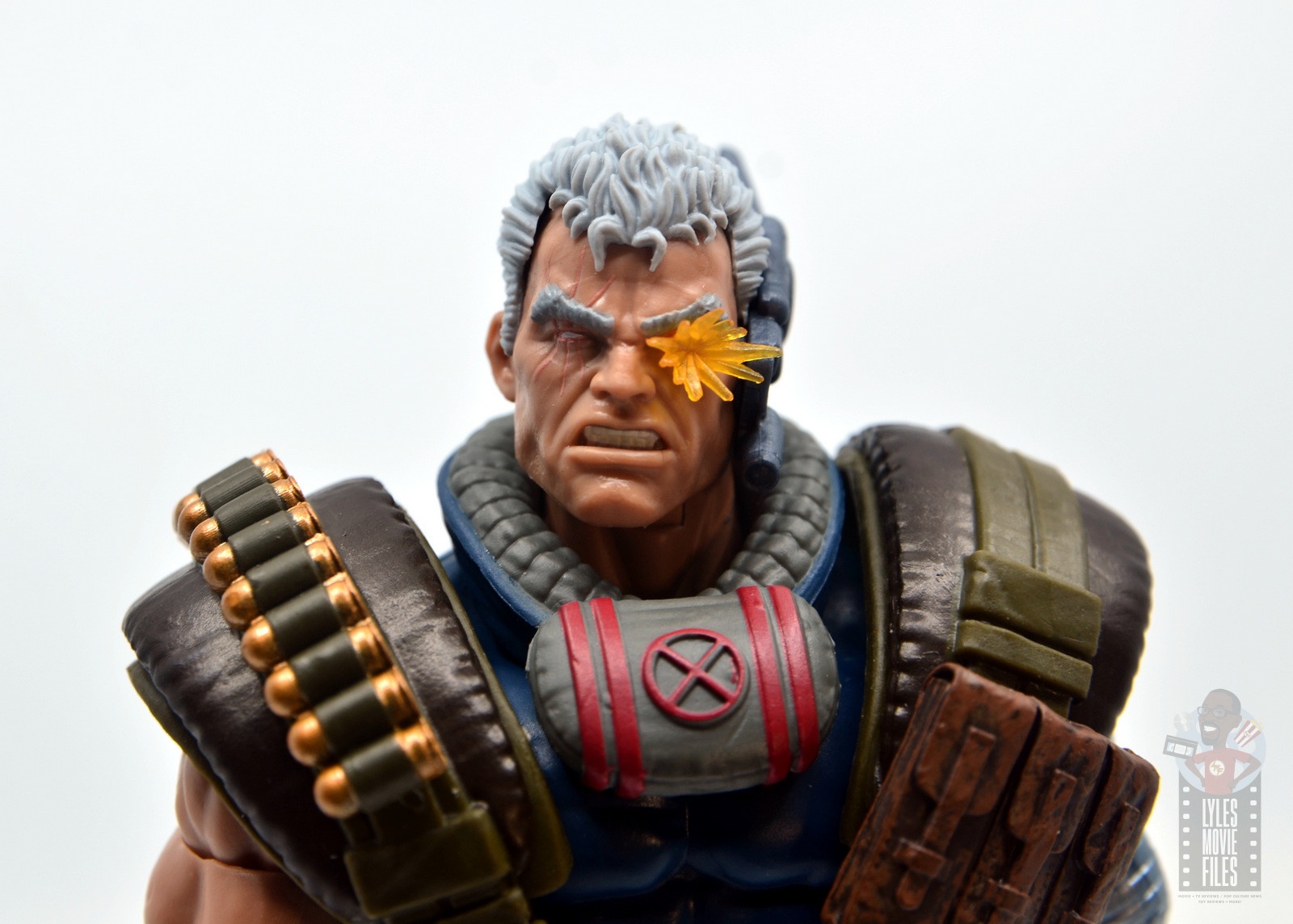 Likeness:  This is the Rob Liefeld-inspired version of Cable that I’ve always wanted. Cable has had a number of outfits over the years. The Toy Biz version attempted to do double duty by going with the vintage shoulder pads look over his X-Men attire. It was a decent hybrid figure, but didn’t have the classic feel of the Marvel Select version.

Hasbro opted to go super classic here with Cable having that linebacker presence Liefeld originally gave him. He’s got the mammoth shoulder straps that double as shoulder pads packed with bullets and pouches. There’s the thick collar and X-collar keg in the front.

Liefeld never seemed to stick to a consistent version of Cable’s attire so I won’t hold that against Hasbro. The core elements are in place despite a few compromises like the lower half where the pants are a straight re-use from the base body Nuke figure and lack the wraparound pouches and dramatic armored kneepads, shin guards and boots of a regular Liefeld Cable.

On the left side, is a massive headset/ear piece.  It’s very well detailed for this scale. My only gripe is the left hand can’t hold any of the guns. It’s likely to provide additional support to the larger cannon. This was a case where an alternate hand would’ve been nice. 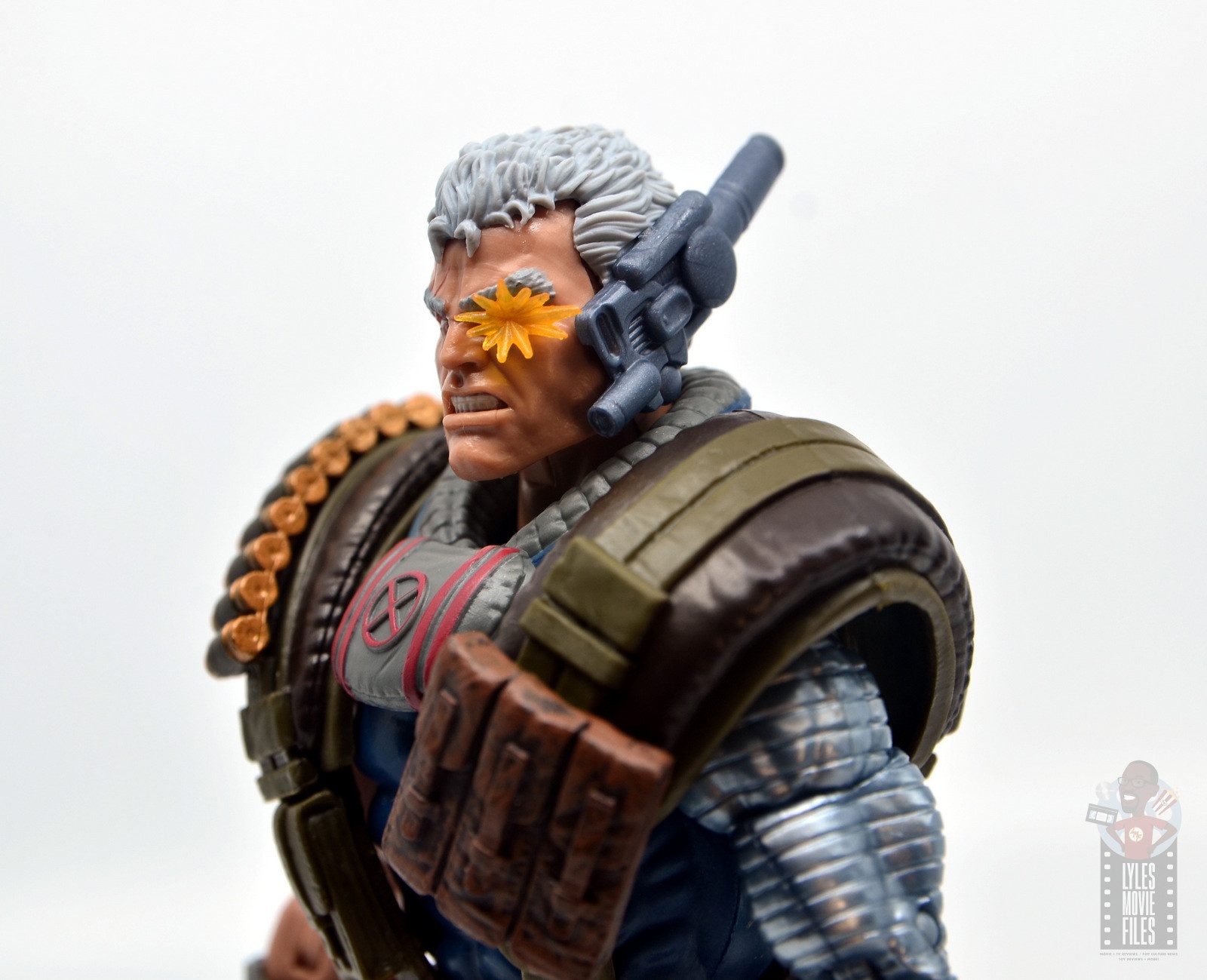 I love the head sculpt, which features a grimacing Cable with a ton of character thanks to the scars, furrowed brow and bangs. Hasbro opted to make Cable’s glowing left eye a permanent feature. The effect is almost right save the fact you can’t actually see the eye to any real measure.

Maybe if they painted it white to stand out. It’s minor, but Hasbro should have sculpted an eye in the center of the effect piece.

Paint:  This is one of Hasbro’s most intricate figures to paint thanks to all the various parts. And they did an exceptional job. The straps and pouches have a wash to add that weathered appearance.

The various line work is clean throughout and there’s no stray marks or bleed through on any level. It’s definitely one of the better paintjobs Hasbro has done considering the complicated nature of the outfit. 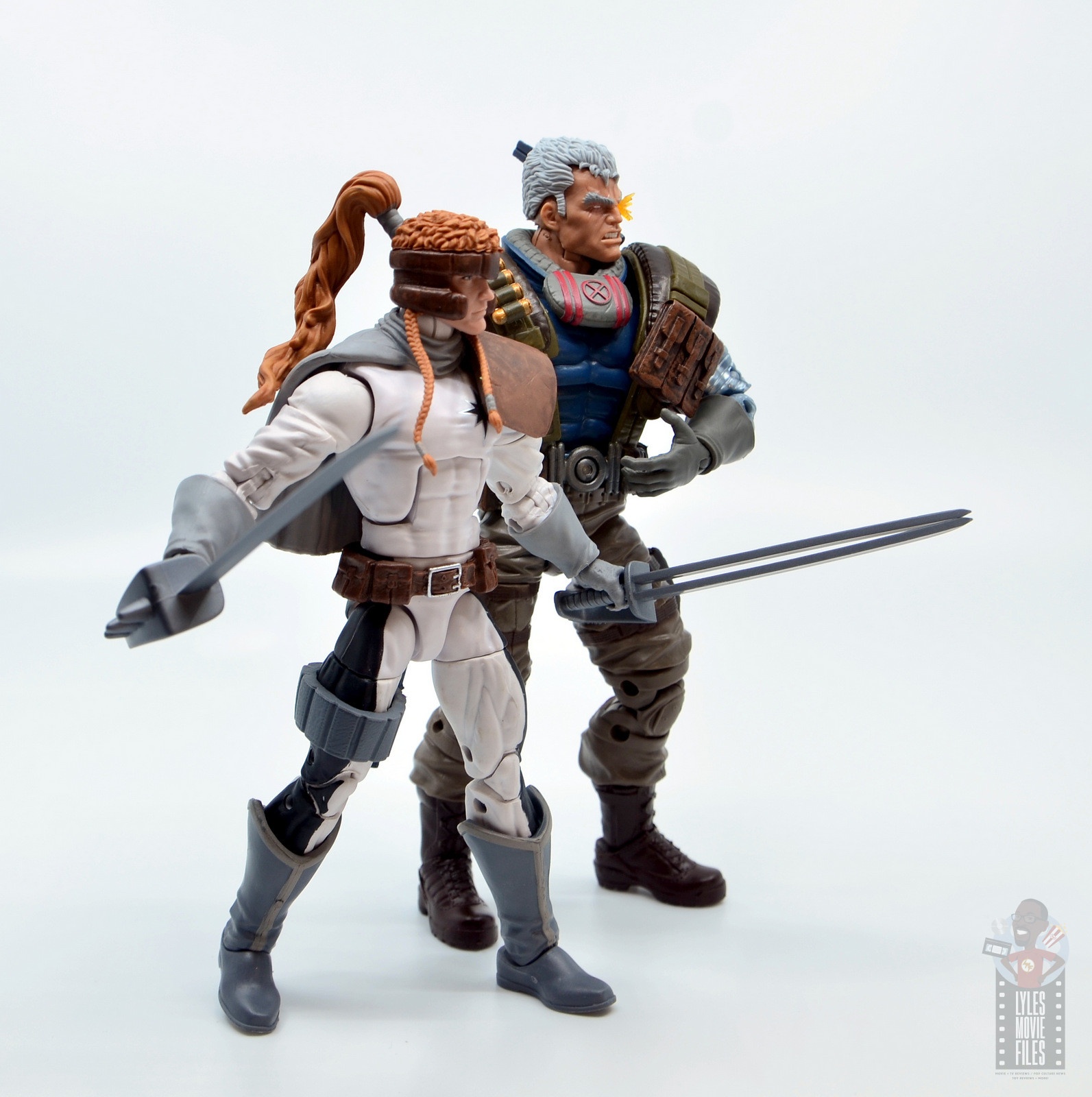 Scale:  Cable is a big dude and is taller and bulkier than most X-Men figures including the more recent Cable figure.

Articulation:  Cable’s game is blasting fools away with his arsenal so as long as he can hit some strong aiming poses I was happy. The Nuke body was a great choice for that as it is very poseable despite the bulk. 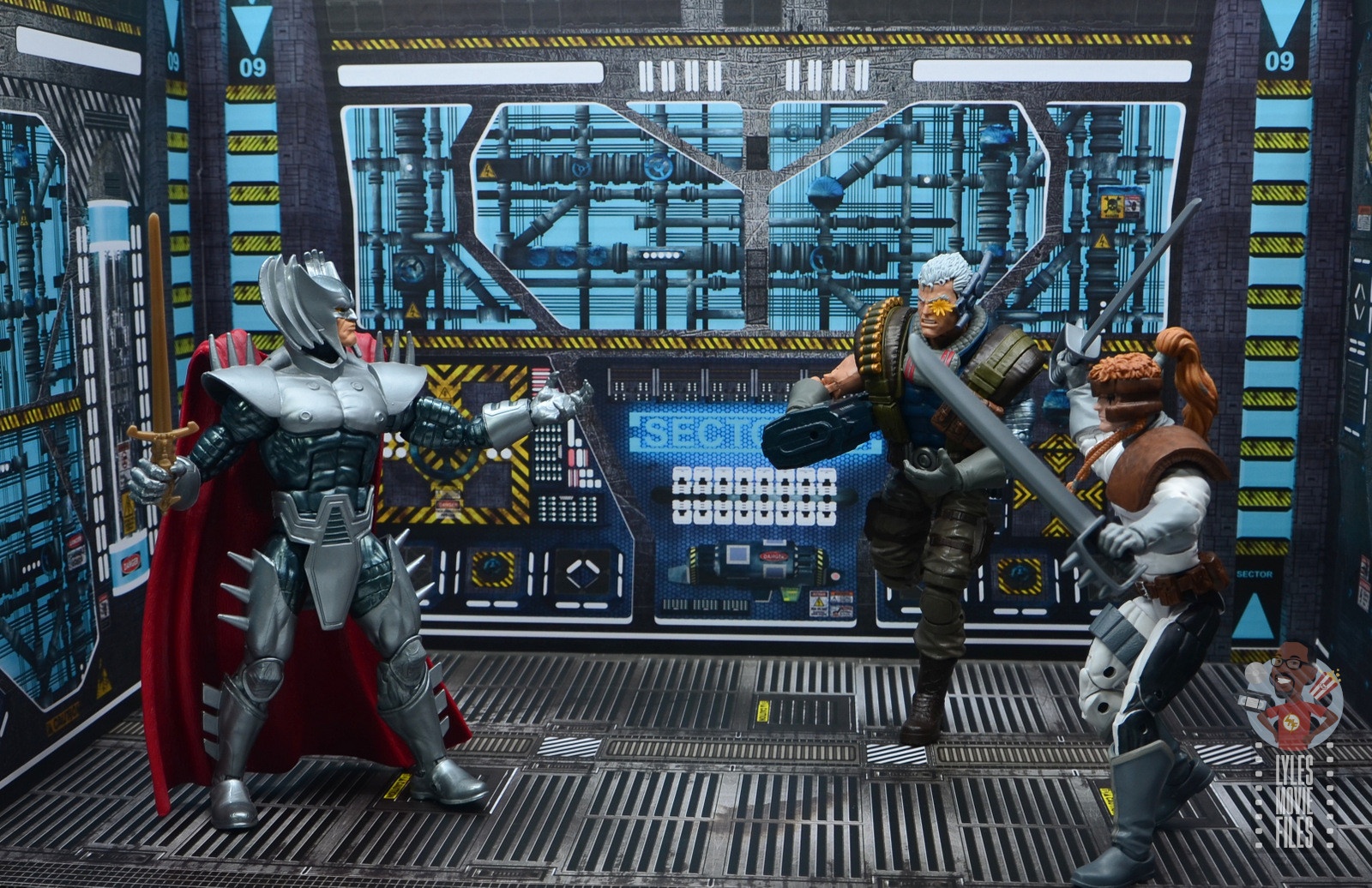 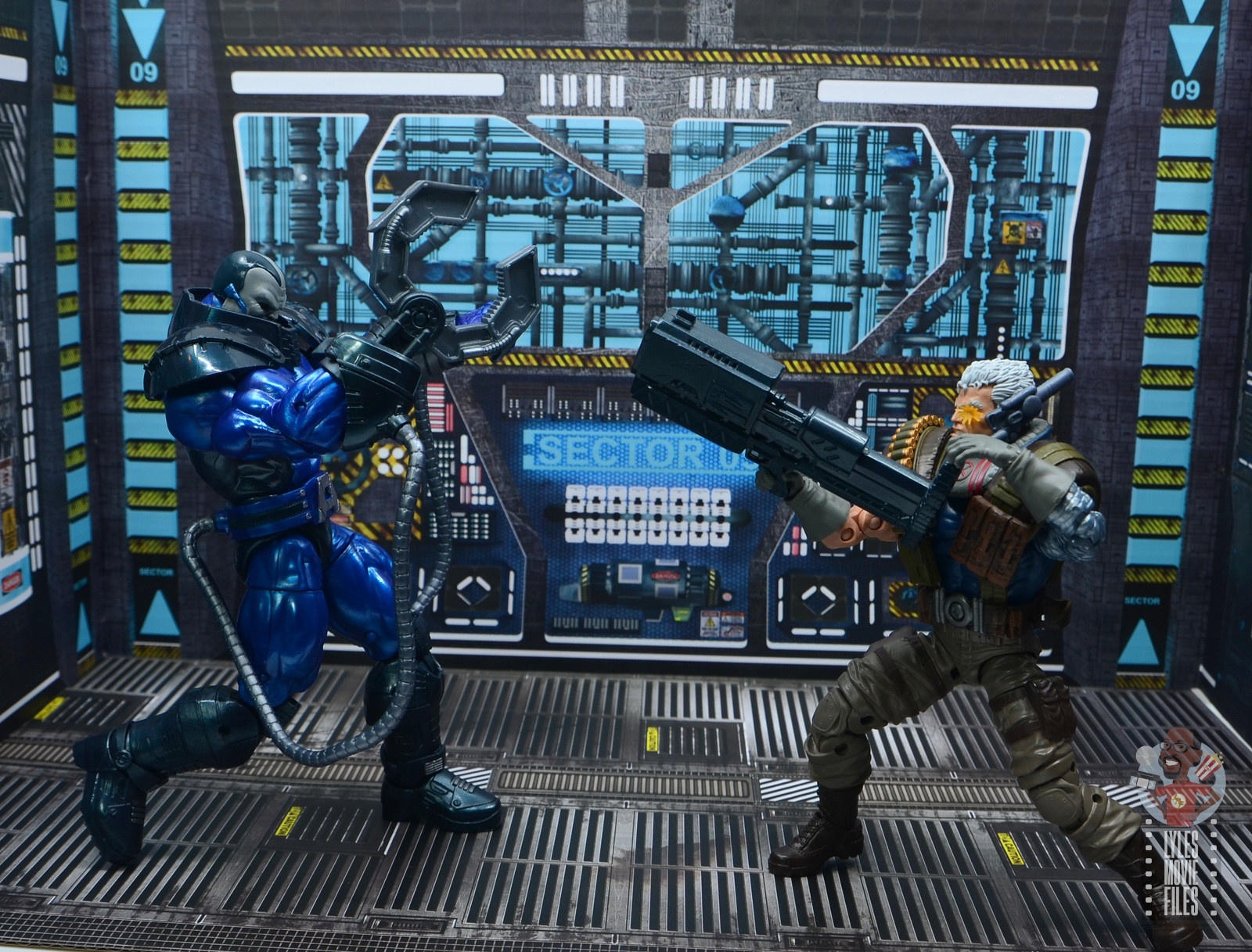 Accessories:  Cable is loaded up for some magnificent carnage. He’s got two blasters of varying sizes. The smaller one looks more like a rifle while the larger one has a bit of sawed-off shotgun appearance. 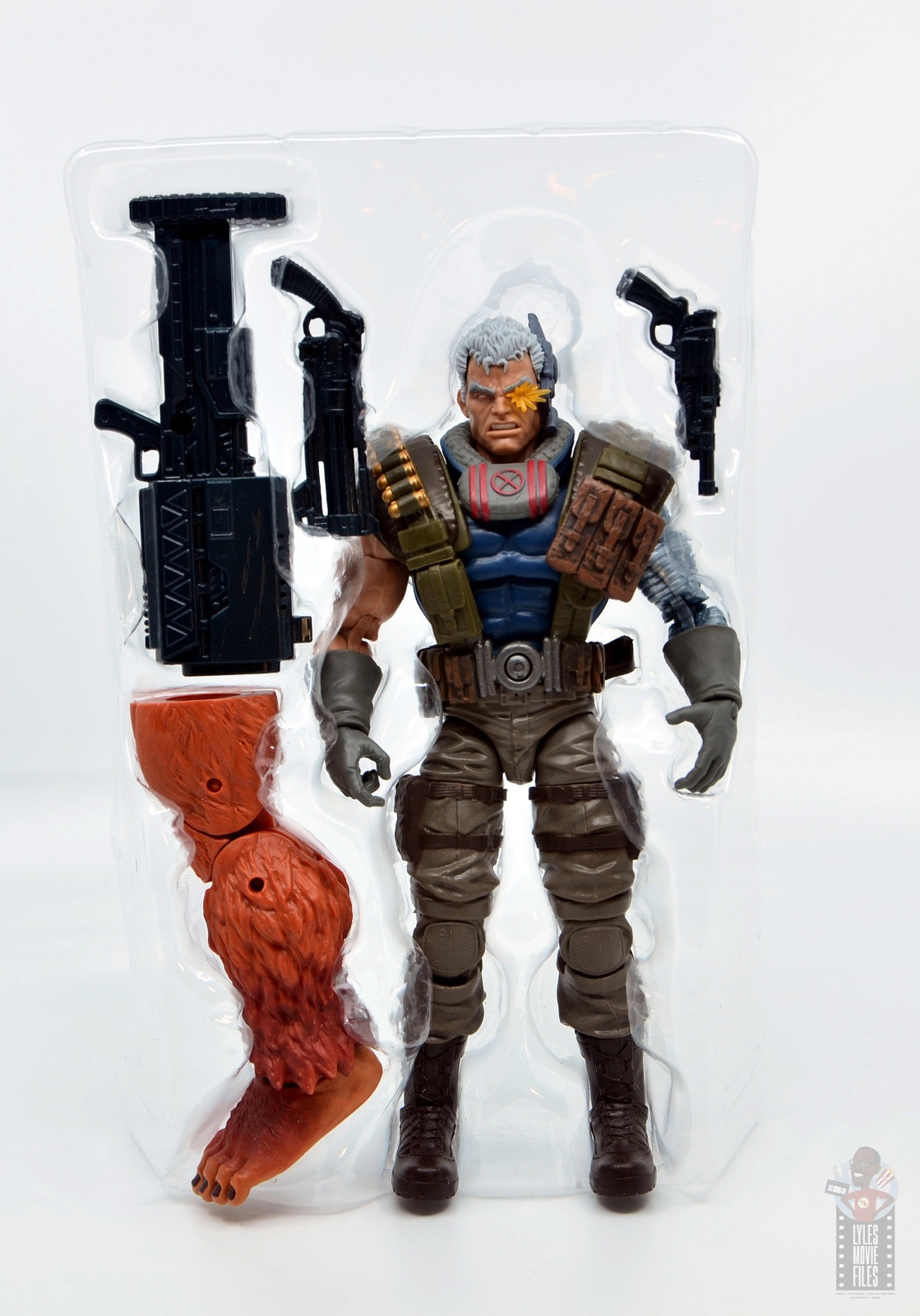 They’re both dwarfed by the super Liefeld-tribute cannon gun. It’s not often that the accessories are so vital to the figure, but they definitely add that extra element of Cable’s rep as a walking arsenal. 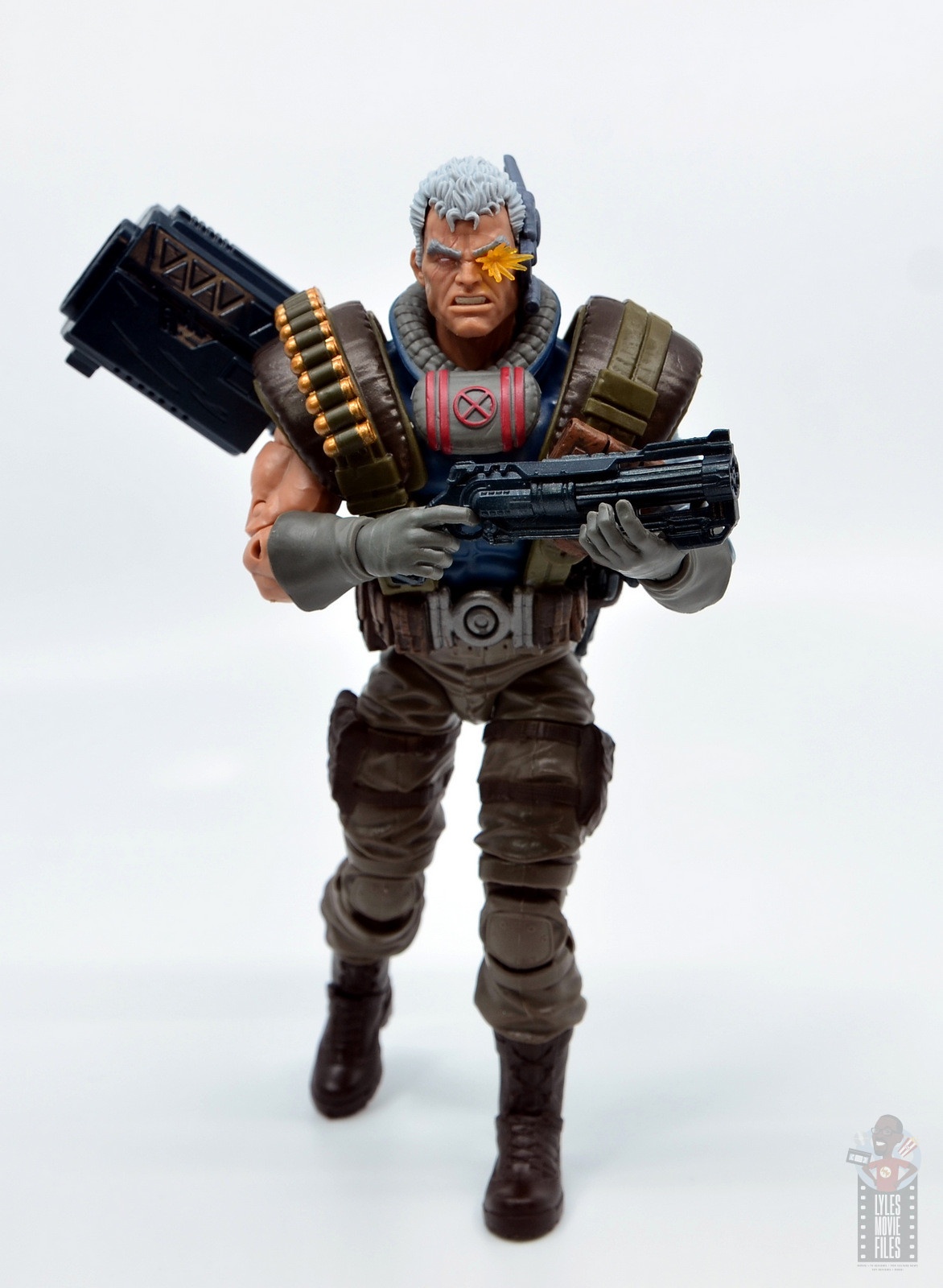 The big cannon can fit on the harness, which is a nice bonus. You can put the small gun on the left side holster. I love when a figure can actually hold all of their accessories.

Finally, Cable comes with the left leg of the Build-A-Figure Sasquatch. 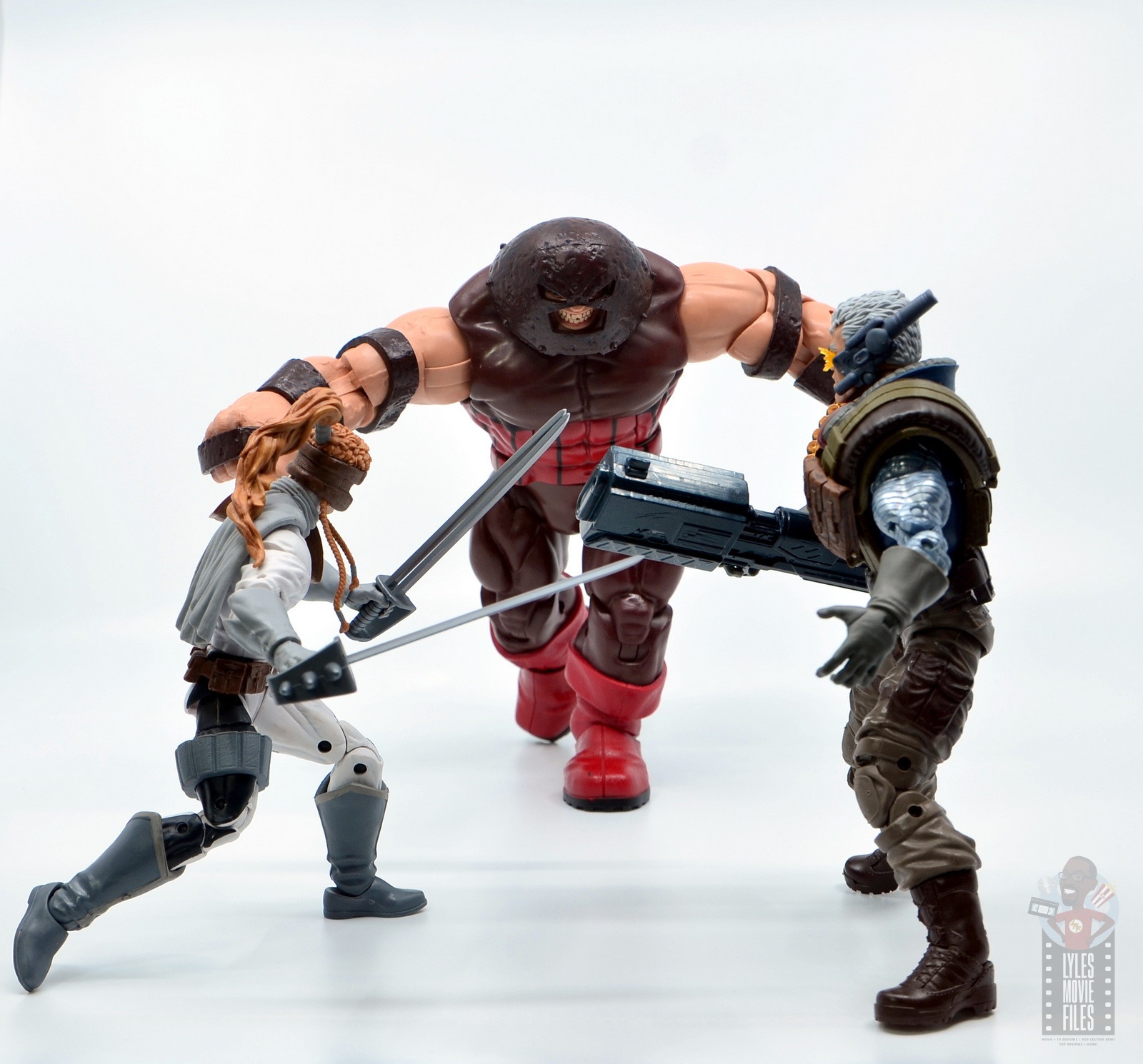 Worth it?  I got Cable for $20. He’s one of those exceptional values considering everything you get with the figure. And that’s not even factoring in the BAF piece.

I really wish this figure came with an alternate left hand to hold a pistol or blaster. Beyond that this is the perfect Liefeld-era take on Cable. 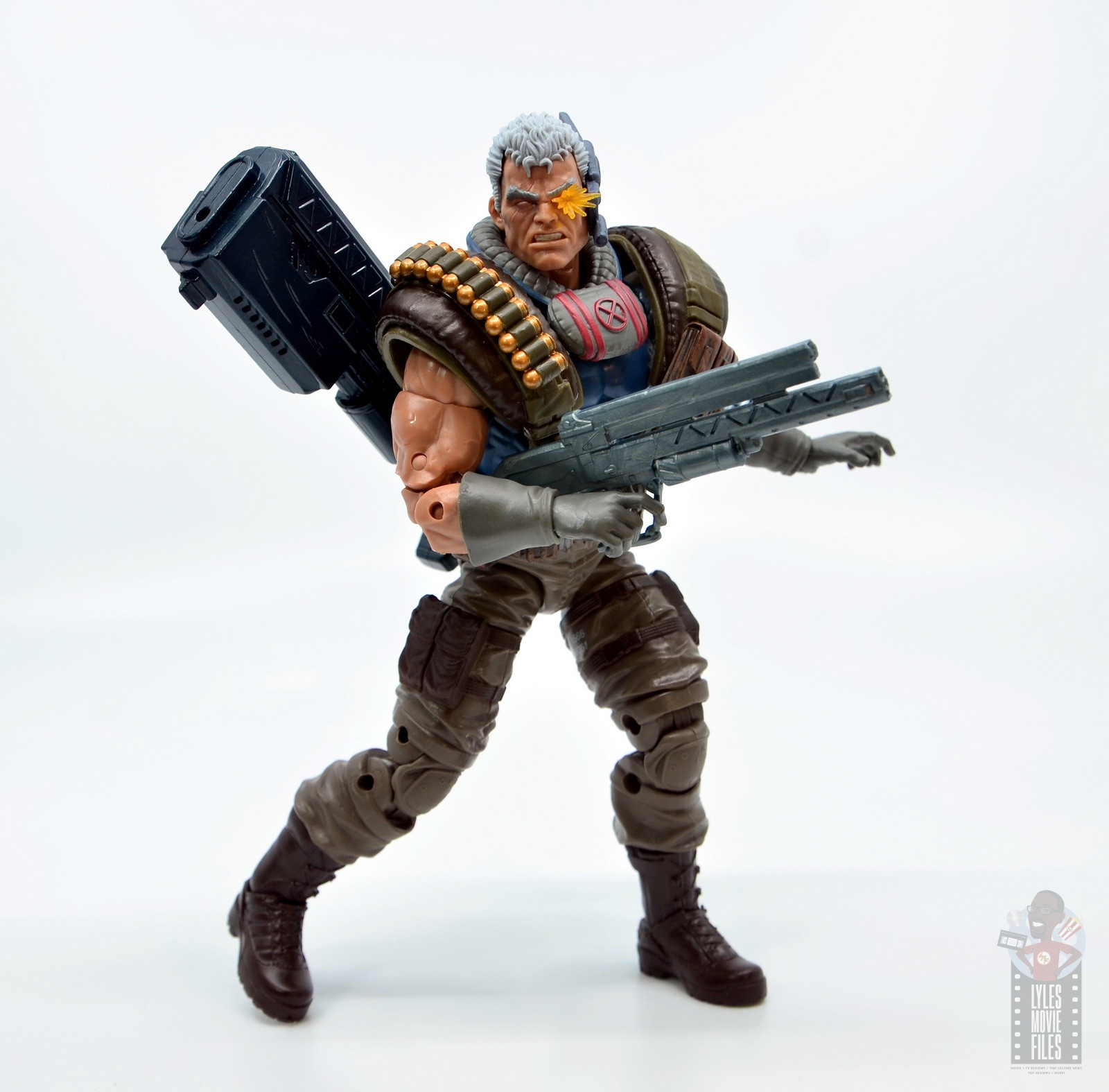 Where to get it?  Cable is still available on Amazon.com, but you’ll have to pay a slight markup. Of all the recent figures, he’s one of the few well worth paying more than retail so don’t miss out.