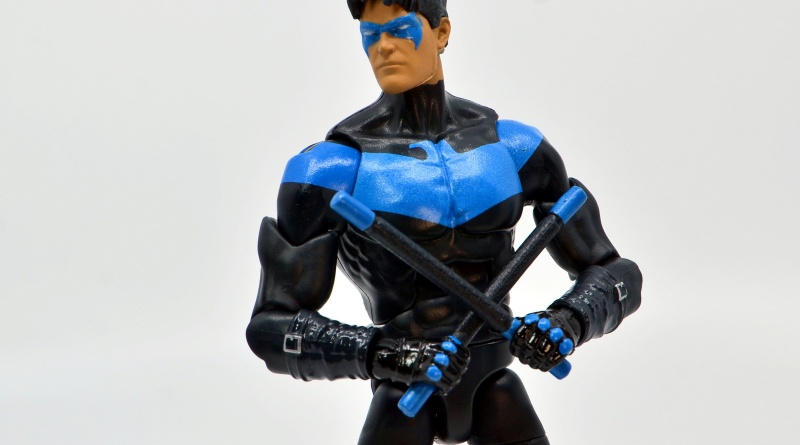 Nightwing is the gold standard of sidekicks. A character so popular he could emerge from the shadow of arguably the most popular superhero to become a highly acclaimed fan favorite on his own. Nightwing is invariably a character that most lines get to sooner or later as he’s too popular and an opportunity for a company to show off their sculpting and articulation model.

As DC Multiverse winds down Mattel’s run with the license they decided to take one final crack at the character based on his Rebirth era. Let’s find out if this is a fond farewell or a Bye Felicia release.

Packaging:  Nightwing is the rare figure that doesn’t stand out with this revamped Multiverse packaging thanks to his similar color scheme that kinda blends him in with all the various shades of blue. I’m pretty sure this is an Ivan Reis drawing of Dick Grayson. I wish Mattel mixed up the pose as using the same picture four times seems like overkill. 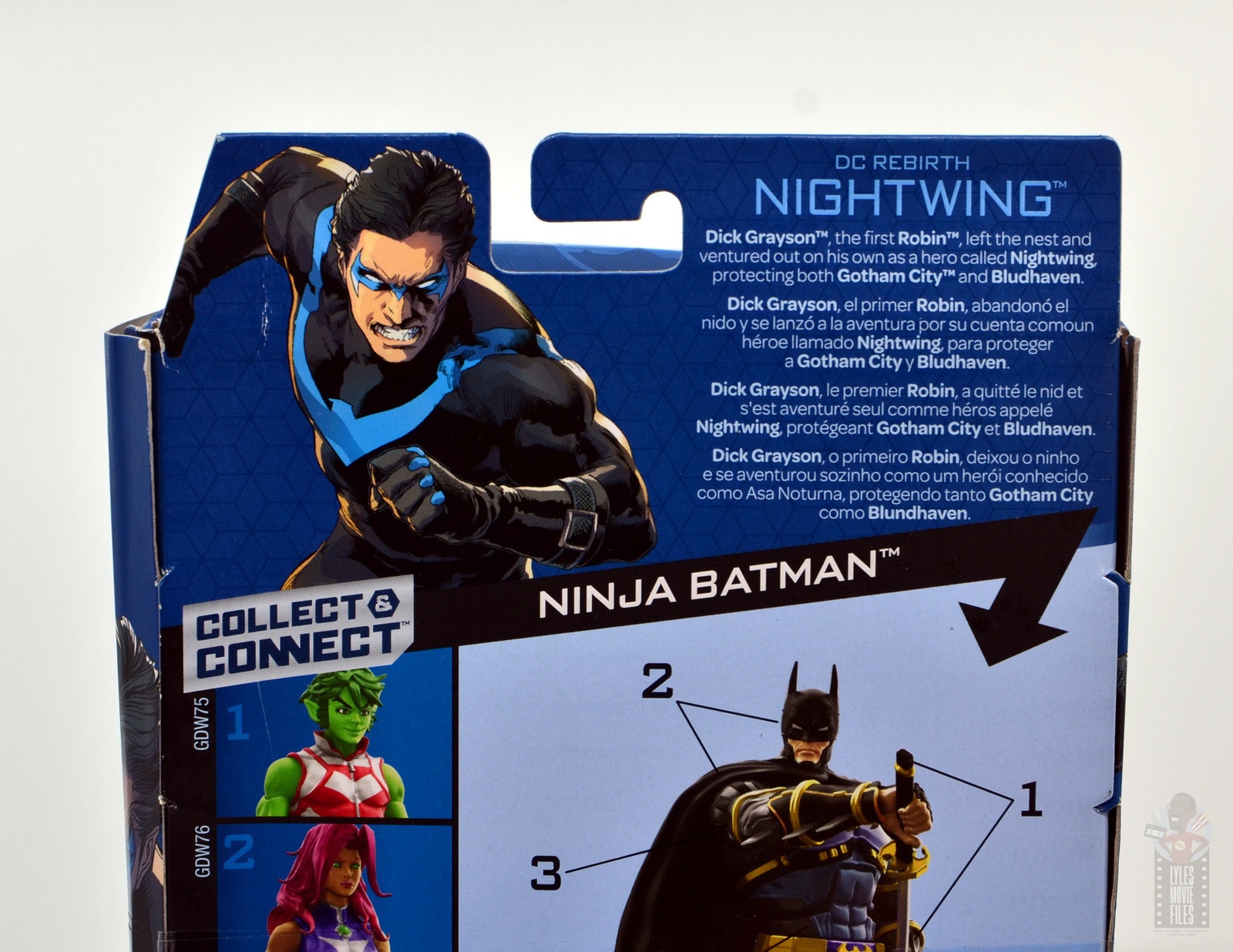 The package set up shows off the figure and accessories nicely, but keeps the Collect and Connect piece basically hidden.  That’s not helpful if you have to worry about retail thieves and swappers. 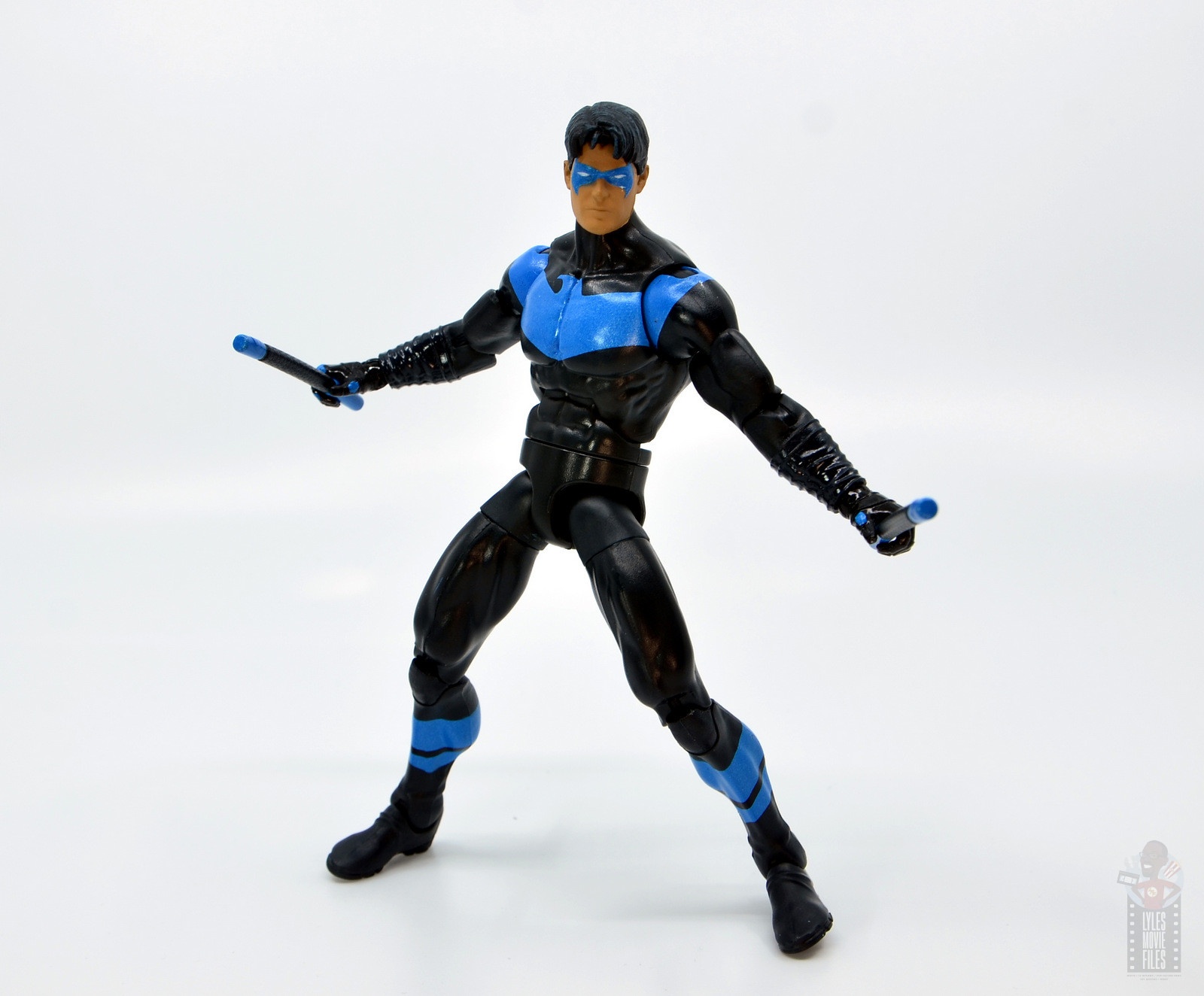 Likeness:  It’s always interesting seeing how different sculptors handle Nightwing. His signature look doesn’t lend itself to a lot of dynamic sculpting so it’s up to the head sculpt to sell the character. I really liked the DC Essentials version, which really captured Dick’s personality.

This figure isn’t quite as good, but I like the head sculpt much more than the DC Classics version. The bangs came out nicely, but I think the more serious expression takes it down a few notches. Not that Nightwing has to smile all the time, but I tend to gravitate more towards the smiling acrobat take on the character than serious vigilante. 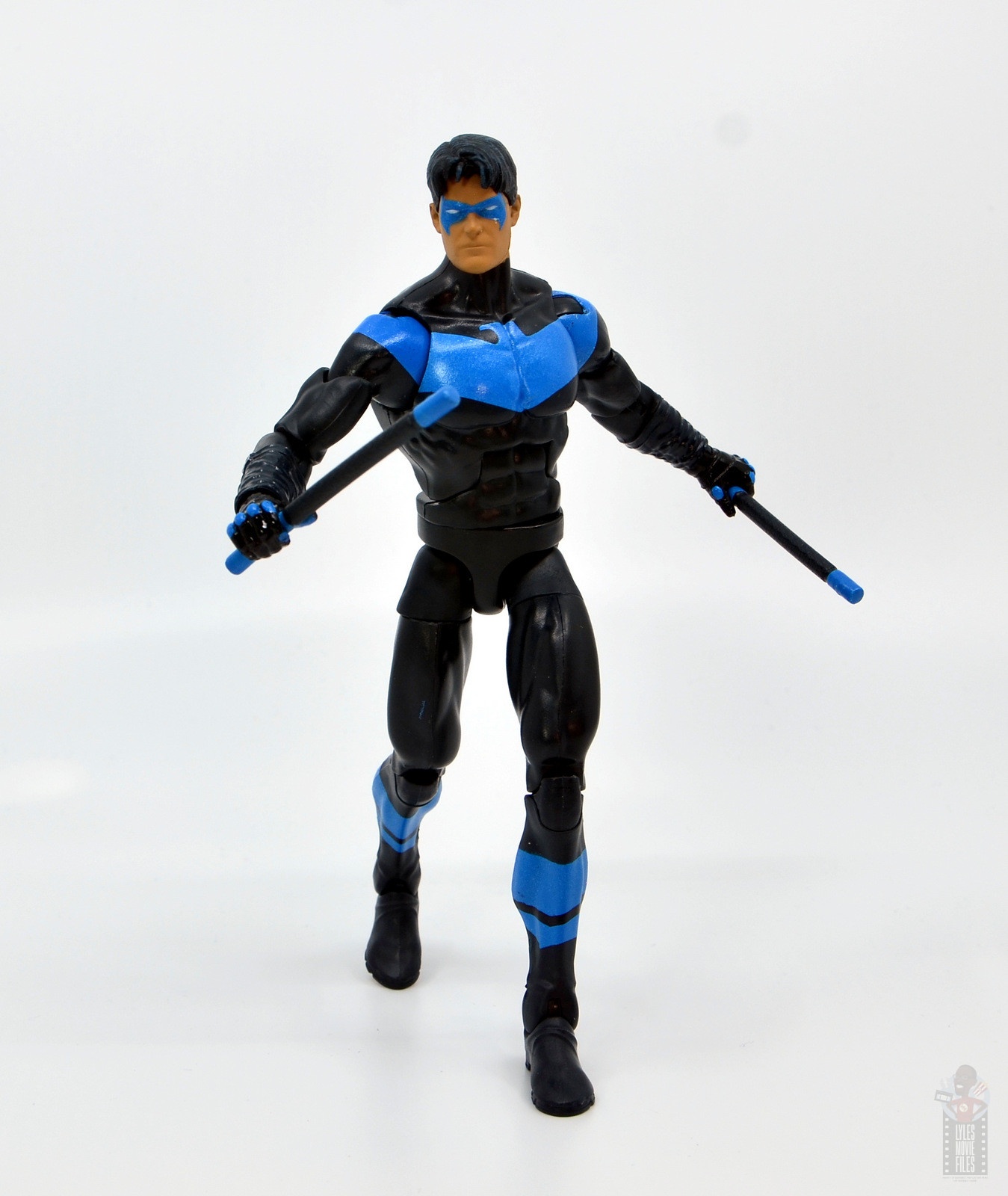 Nightwing’s costume is pretty basic beyond the wrist wraps and knuckles. Mattel didn’t shortchange those either and the figure benefits from those being sculpted instead of painted. 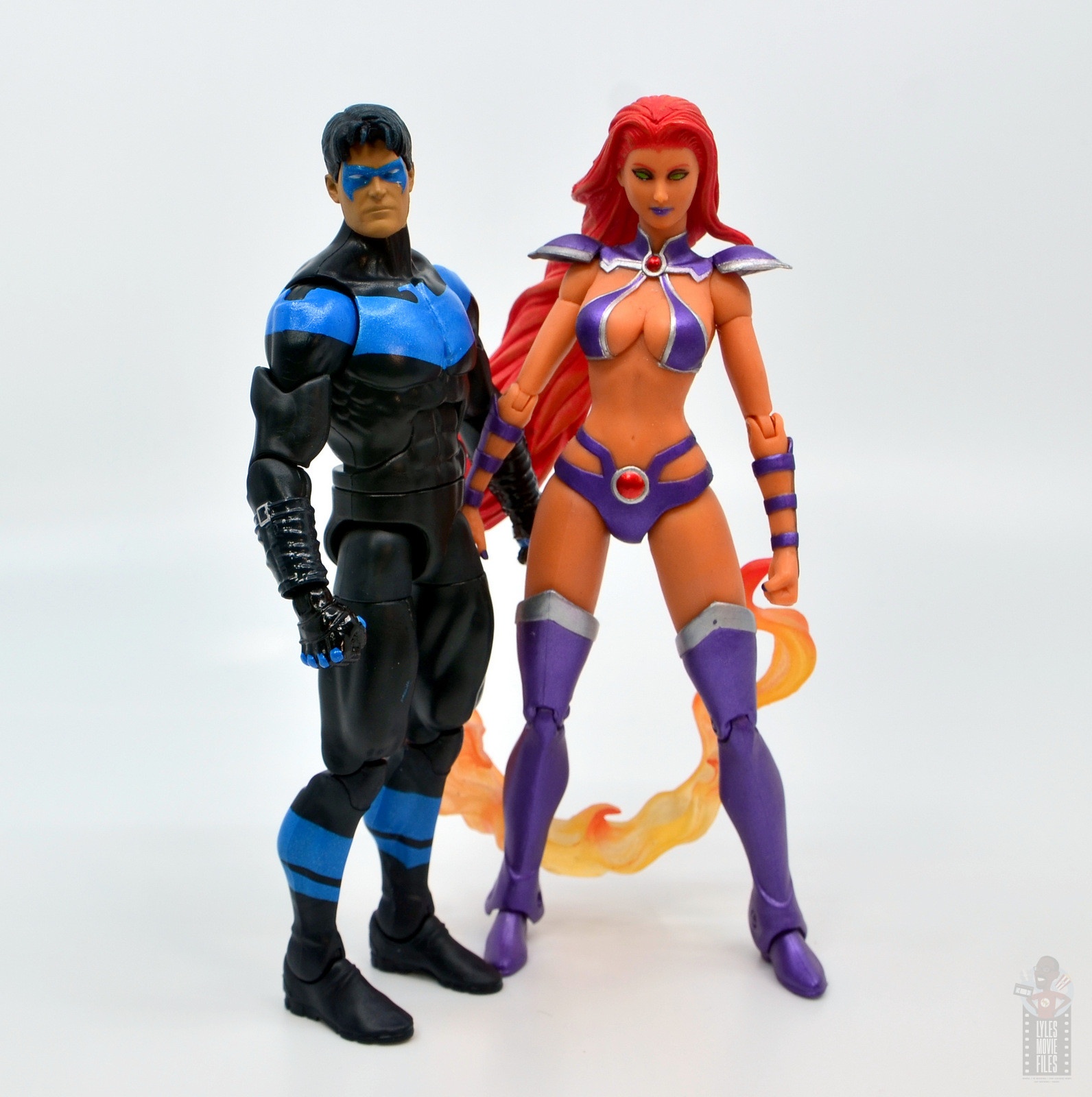 Scale:  I always consider Nightwing shorter than Batman and the other older Justice League members. Mattel didn’t quite get a good changing scale down for the line so the guys are all around the same height. 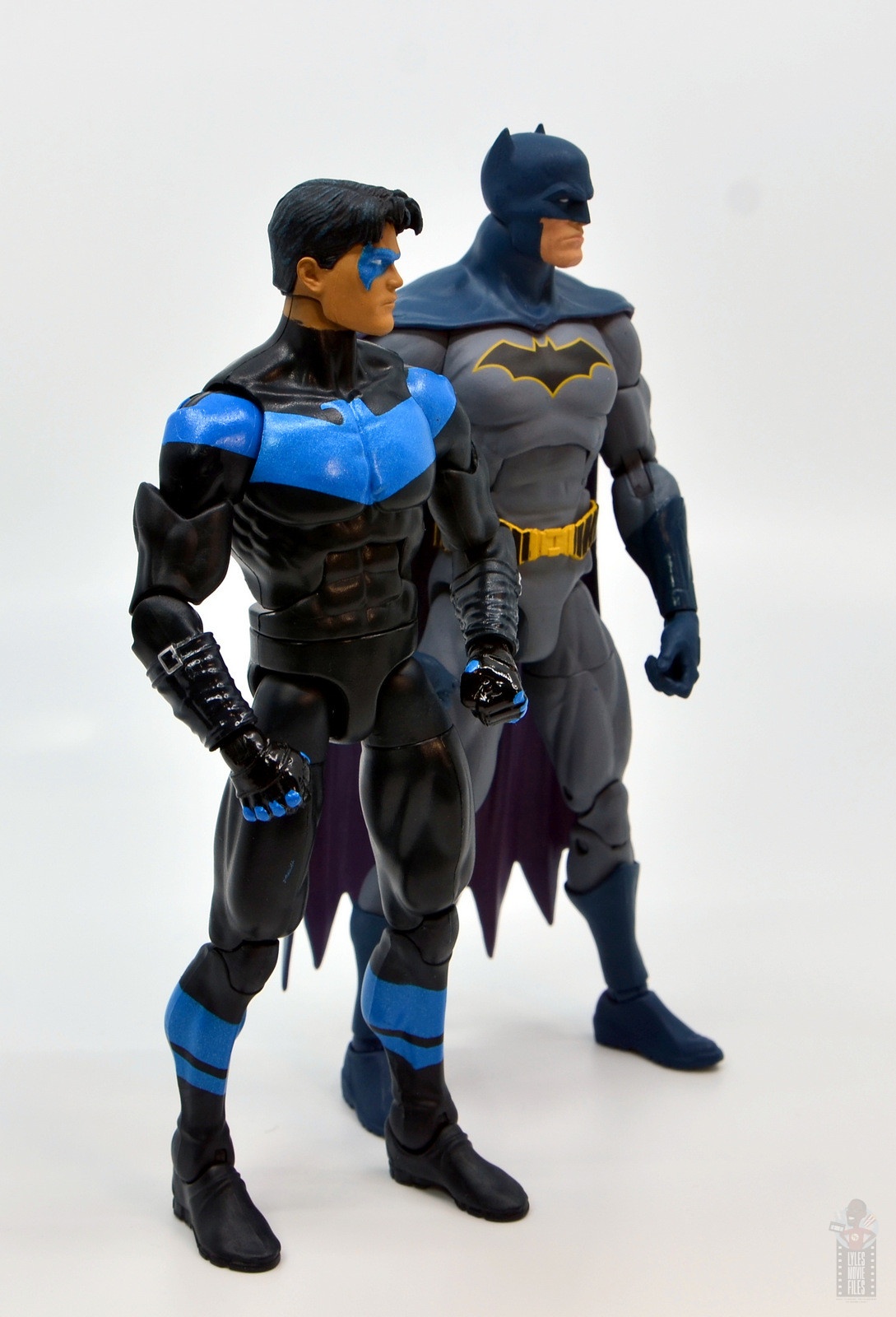 Paint:  Nightwing is a hard guy to mess up paint wise as he’s basically black. There’s a nice pearlescent paintjob on his logo though it lacks the sharper angles of the source material. The Essentials version has the Rebirth look down just right for reference. Impressively, Mattel even went the extra mile and added the blue paint in the inner portion of the gloves like the source material. That’s a nice touch.

My figure also had some random white marks in the blue portion of the mask, which was a little annoying. Hopefully it will come off without much trouble. 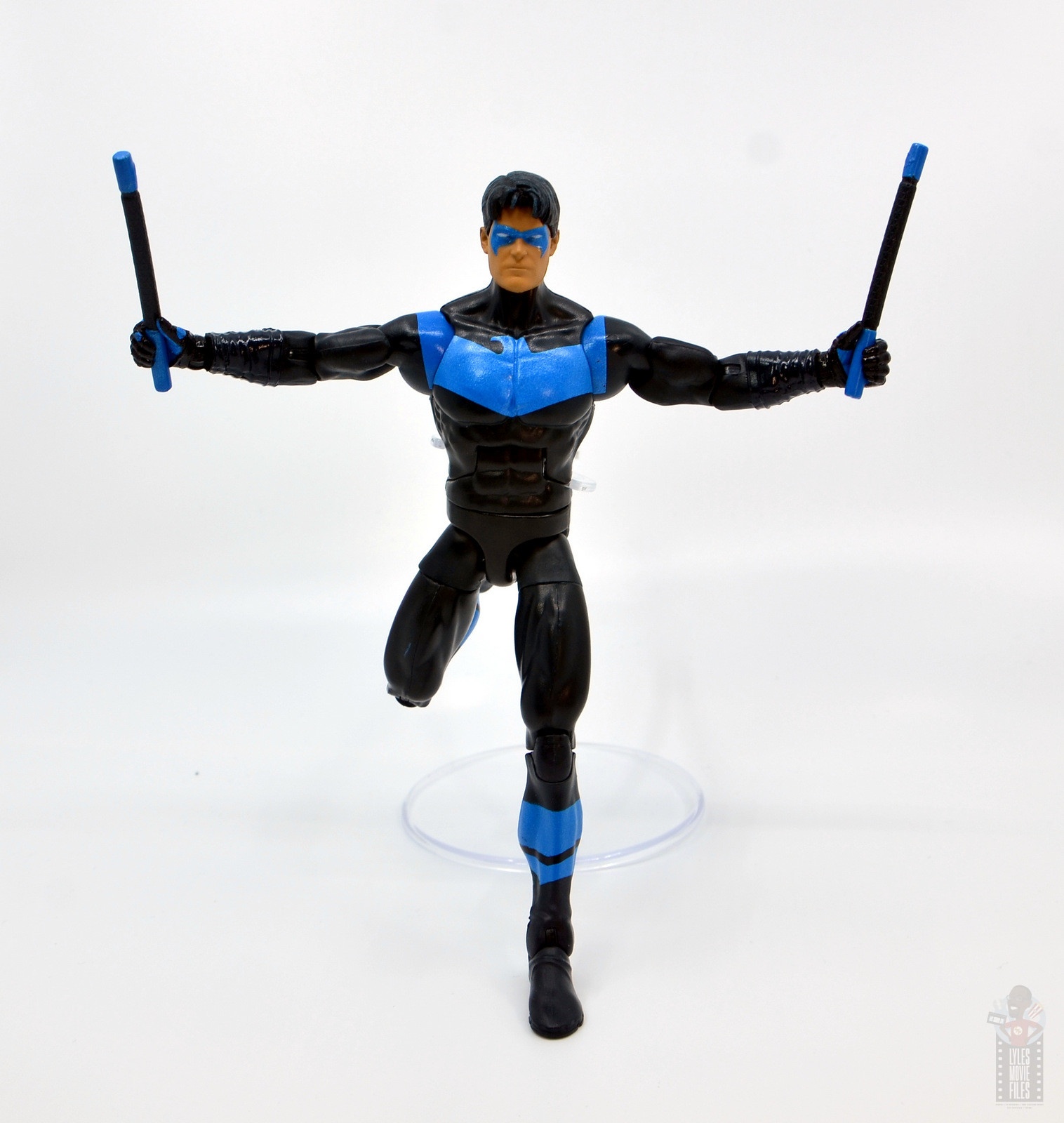 Articulation:  This is the one category Mattel made the biggest strides as the figures have such a better range of movement. It’s not the hyper articulation that would be ideal — for instance the neck joint doesn’t have the kind of up and down range to allow for dynamic poses. The torso joint could also use better back and forth range as well. 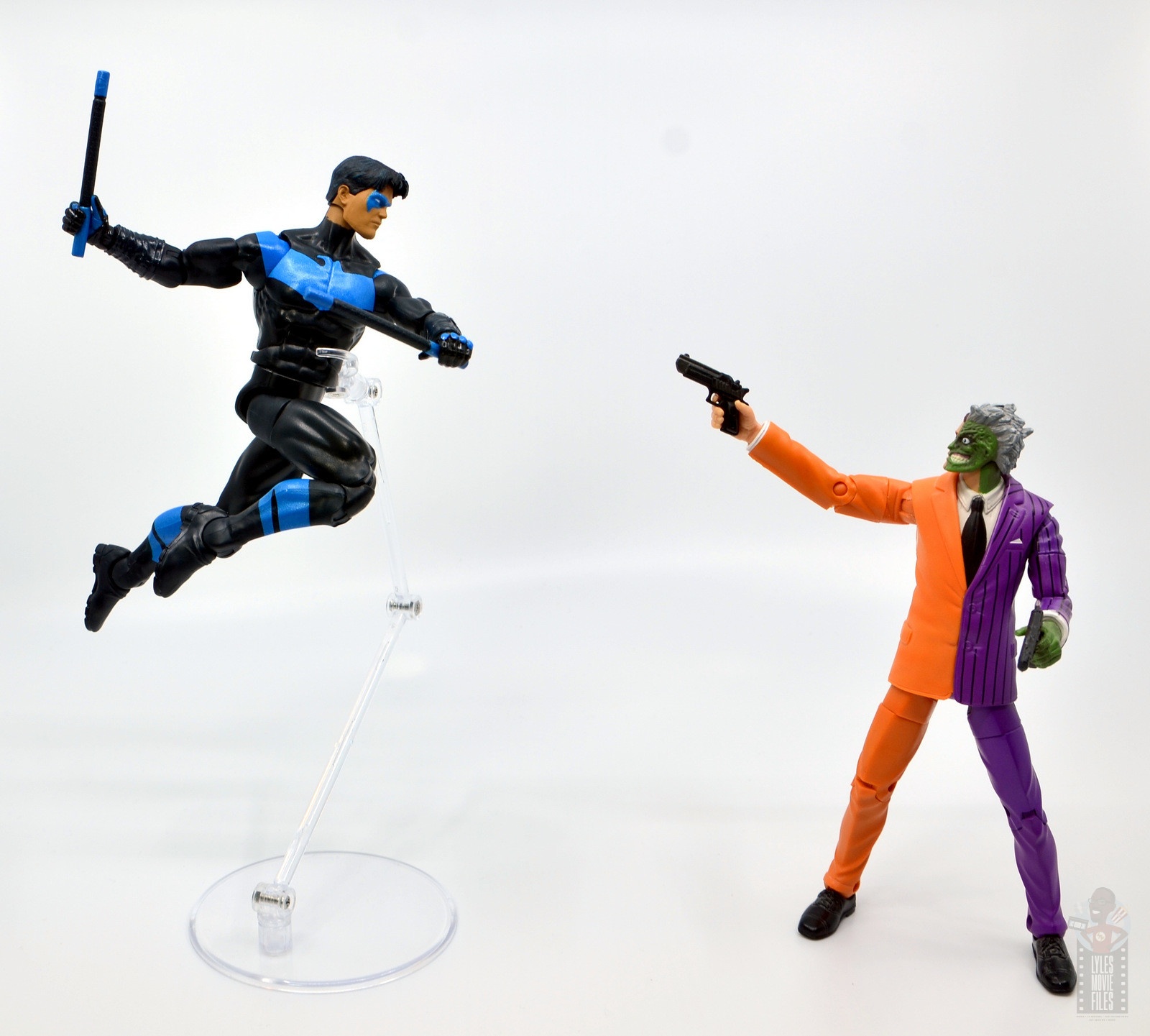 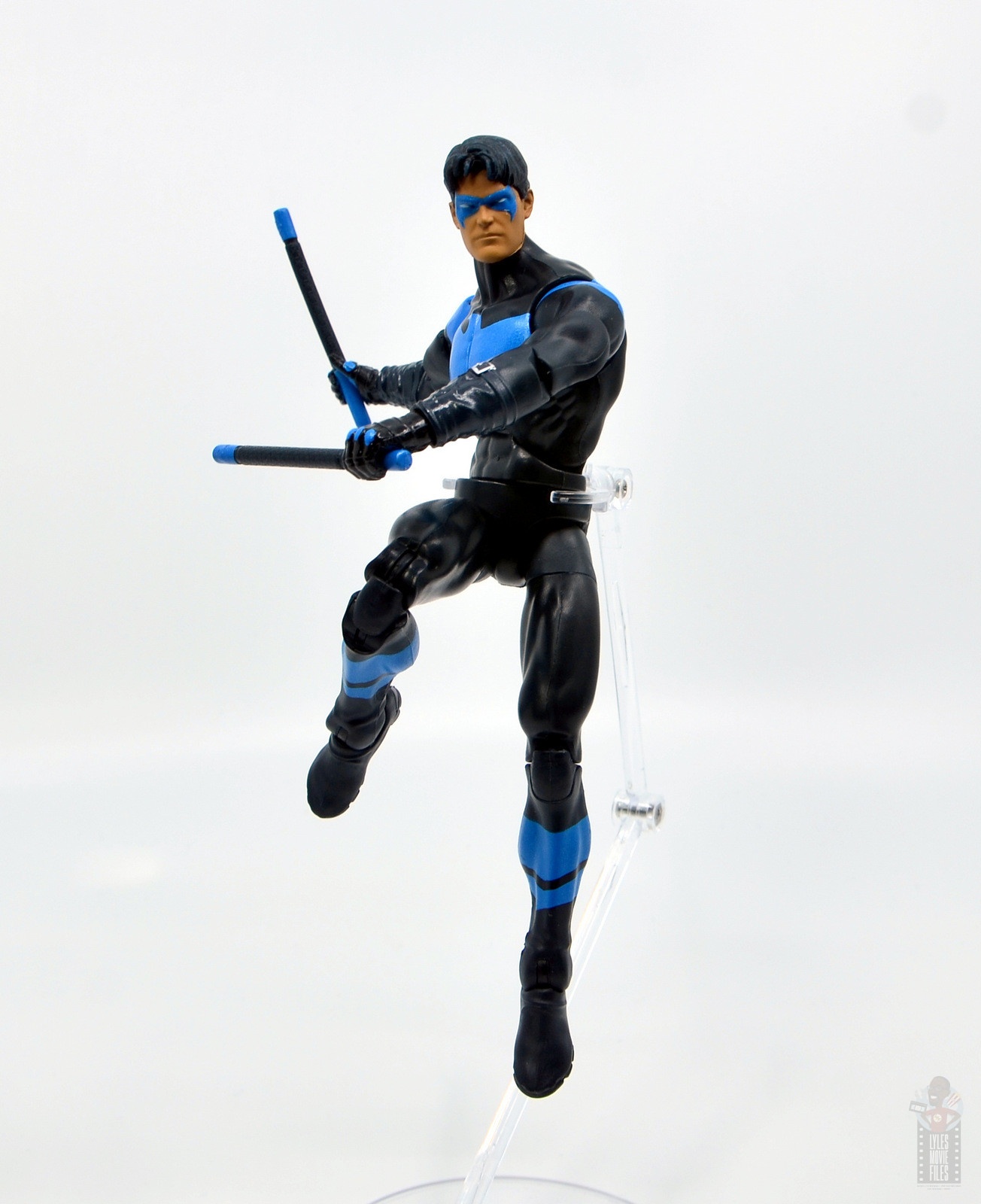 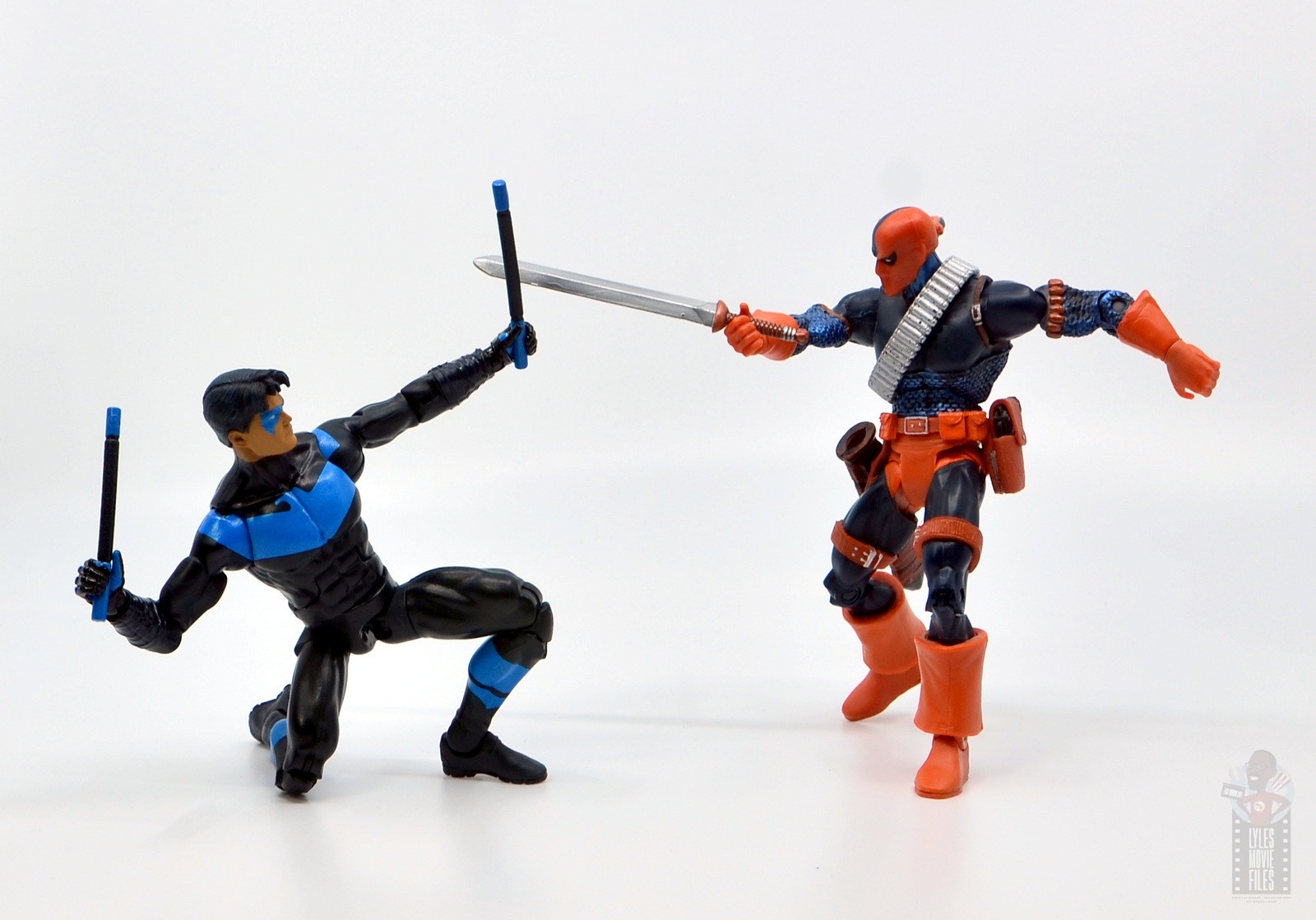 Accessories:   Nightwing has his trademark escrima sticks and Mattel actually added some texture to them so they don’t just look like plastic strips. That’s a very nice touch. The blue tip section is also sculpted. That’s more than I expected and they really came out nicely. 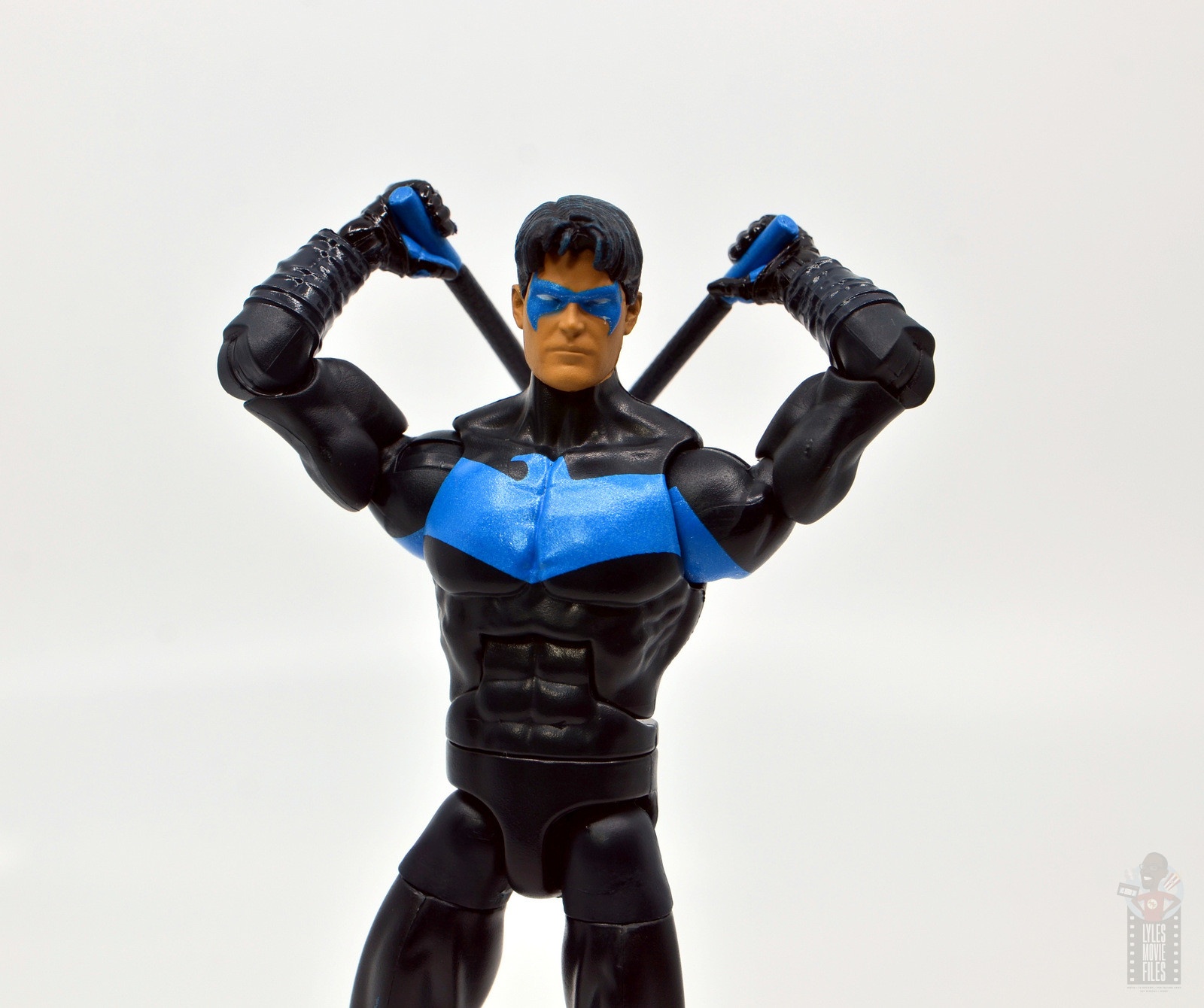 He also has a pair of fists for when he wants to get up close and personal with some bad guys. 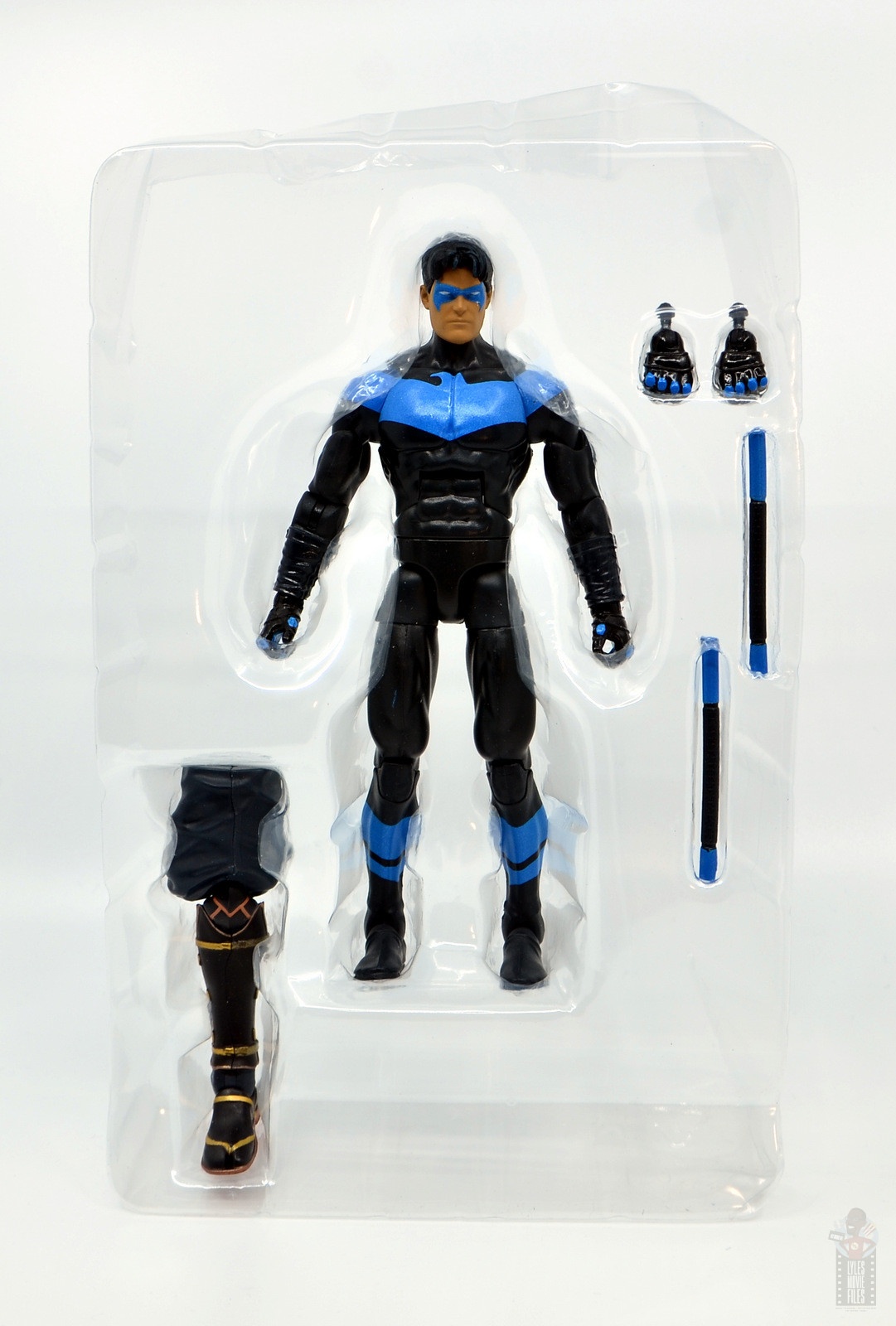 Finally, he comes with the right leg of the Collect and Connect Ninja Batman figure.

Worth it?  I got Nightwing for the standard $20 retail price. I figure he’s probably going to eventually be the marked up figure with this line so it made sense to just get him as soon as possible. For this line he’s well worth the price tag. 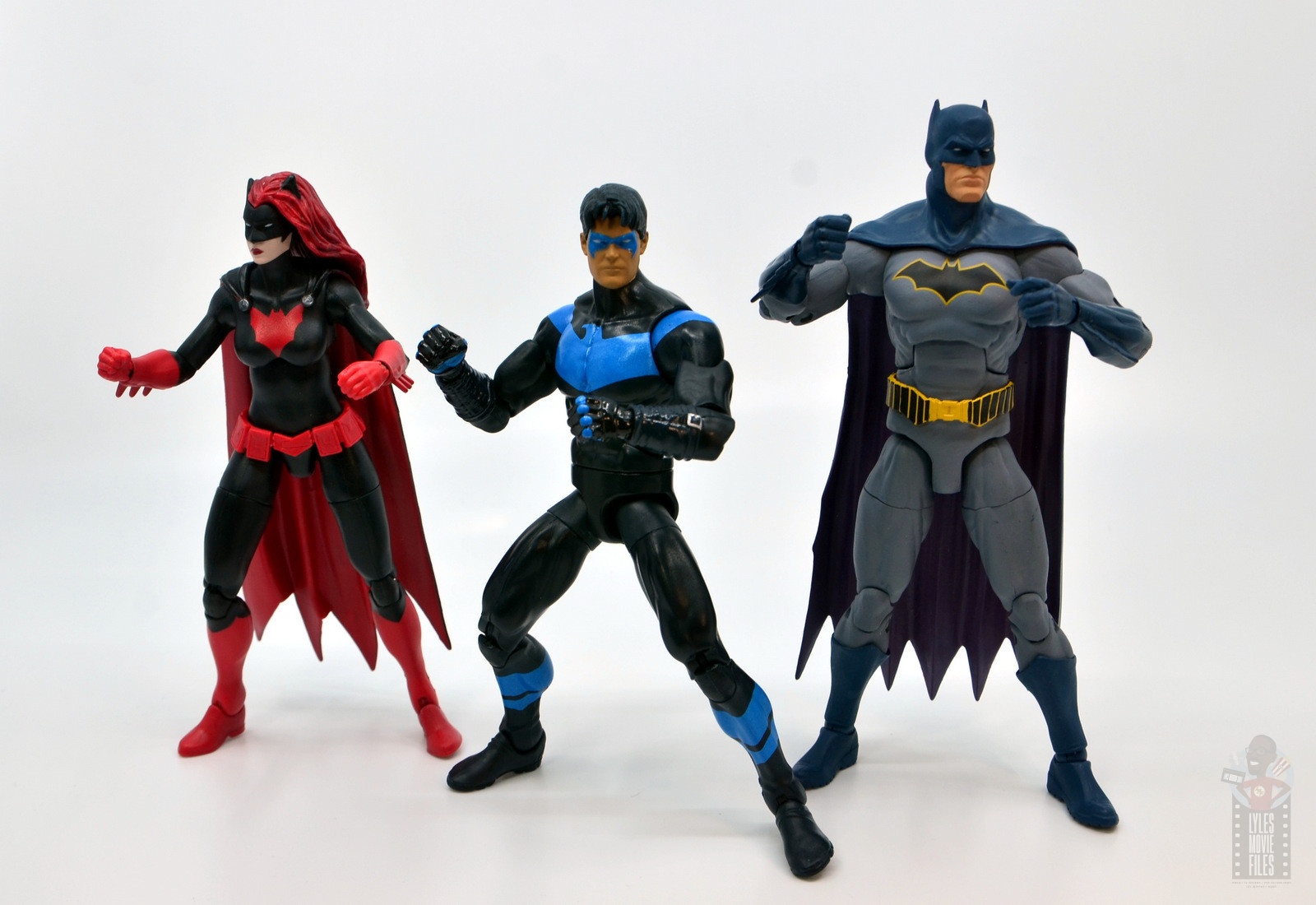 Nightwing is a solid addition to the DC Multiverse line. He’s just lacking slightly more range of articulation. It’s still a matter of preference as to the superior Nightwing between this or the DC Essentials version. 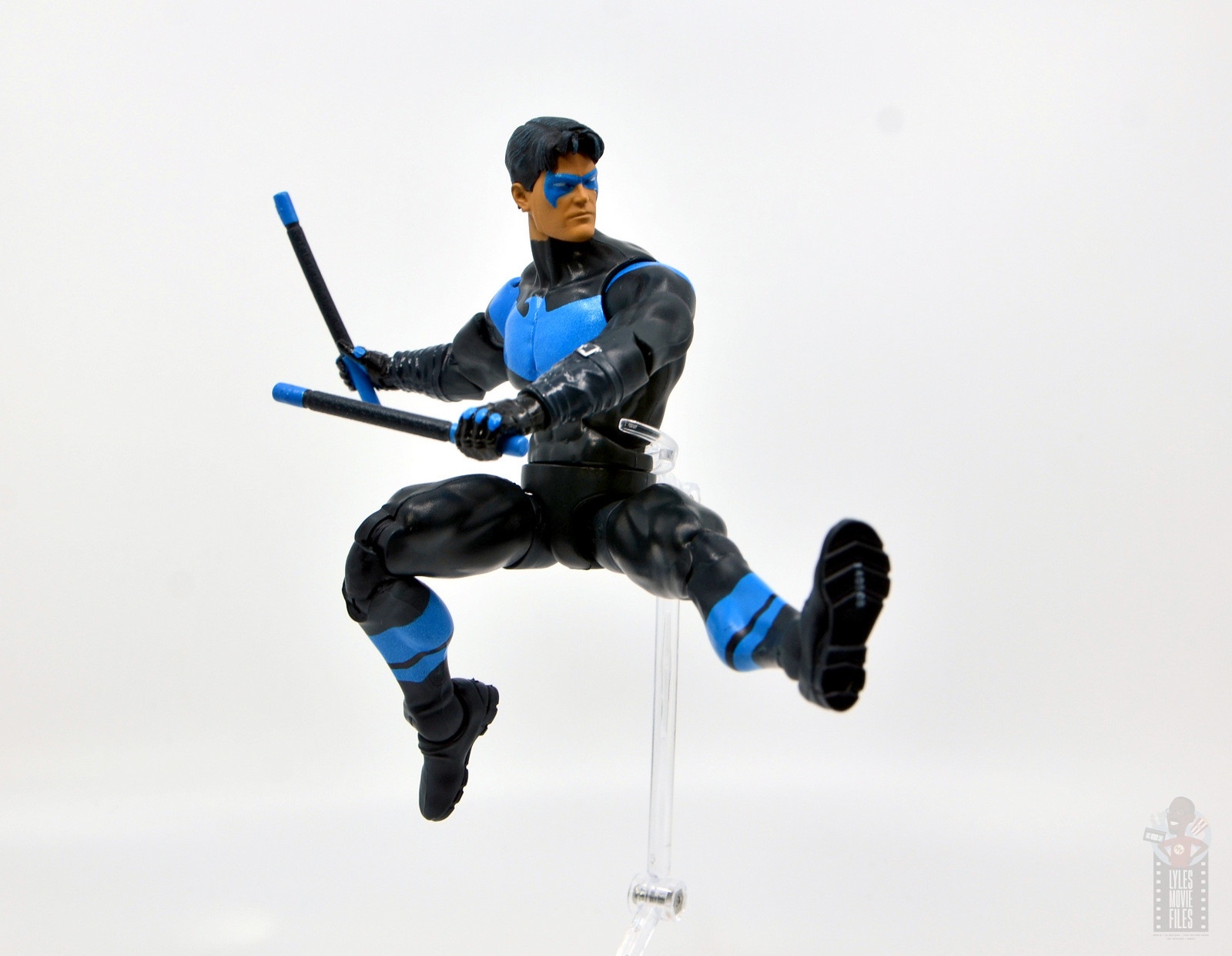 Where to get it?  I got Nightwing from Amazon.com as trying to find these figures at retail has been a losing proposition for me for many waves now. You can also him or the case from Entertainment Earth.