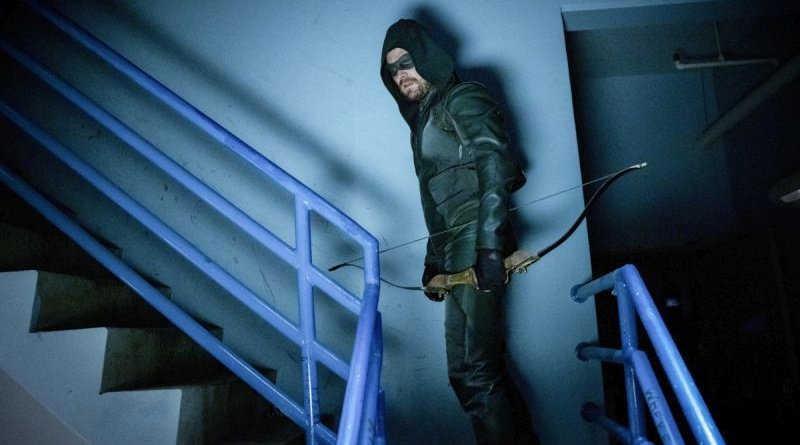 I got burned last year after the promising kick-off episode, Inmate 4587, but I doubt that will be the case this year. There’s a focus here that was lacking in previous seasons suggesting Arrow’s final season could join the series’ high points of Season 1, 2 and 5.

Astute viewers didn’t need the Monitor narration to know something was amiss starting with the Batman mask standing in for the Deathstroke mask on Lian Yu. 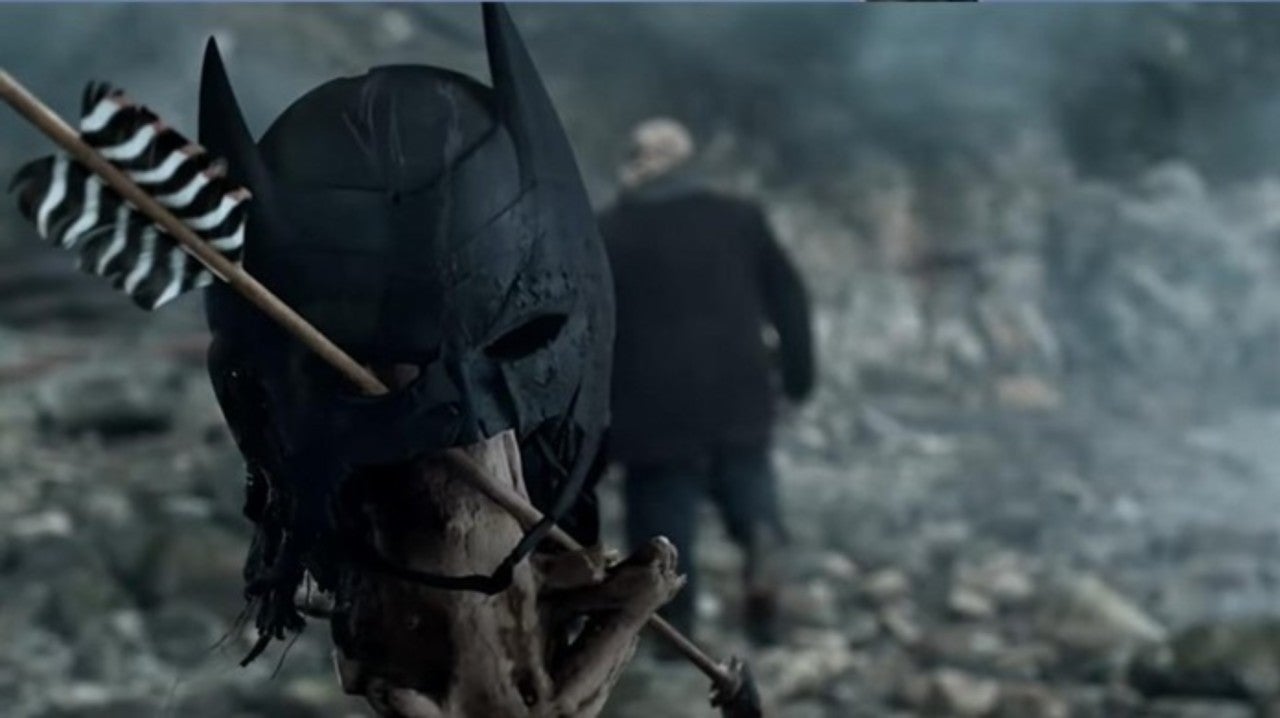 Twelve years have passed since Oliver was presumed dead and a lot has changed. His mother Moira did remarry, but not to Walter. On this Earth she married Malcolm and everyone knows Thea and Tommy are siblings. Oliver’s reactions are terrific here with the happiness to see his mother again, the annoyance at the sight of Malcolm and the joy of talking to Tommy who isn’t a hallucination.

But everything isn’t all great. Thea overdosed on Vertigo. And there’s still a Dark Archer running around. Oliver is convinced it’s Malcolm naturally and blows off The Monitor suggesting it’s personal. Oliver is on this Earth to find the Dwarf Star particle specific to this world and it’s missing. Maybe The Hood and Black Canary know about it? 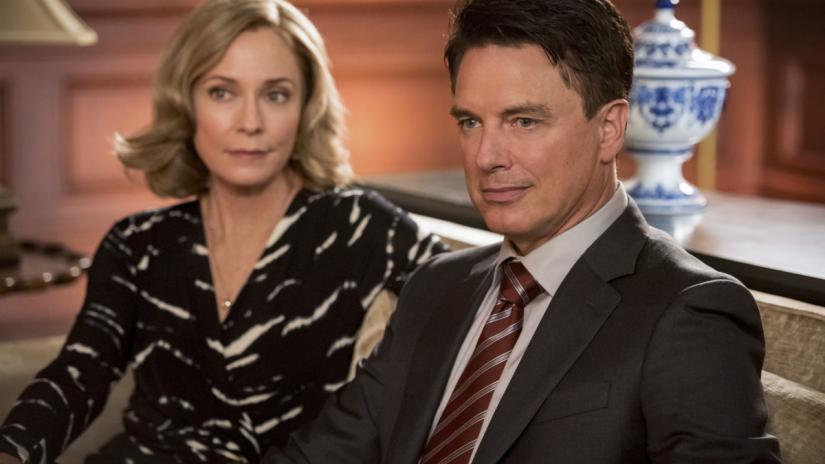 In another shocker this Hood is Adrian Chase. I love that he still had that awesome Prometheus theme. Adrian looks and acts the part of the comic’s Oliver Queen right down to calling Laurel “Pretty Bird.” Apparently on no Earth in this Multiverse can Arrow and Canary be together as they’re just co-workers.

Oliver tracks down the evidence to take Malcolm down, but gets stopped by the Dark Archer who’s actually Tommy. This was such a great callback to the Season 1 theory that Tommy was actually the masked archer who kept taking Oliver down. It was a nice touch to have Rene and Dinah working with Tommy showing how they could easily have been swayed to go in the wrong direction without Oliver.

In what seems to be another callback, Oliver meets John Diggle, but it’s “our” Diggle who borrowed a portal from Cisco to help Oliver out. Like Iris on The Flash, he’s not convinced Oliver has to die to save the Multiverse. 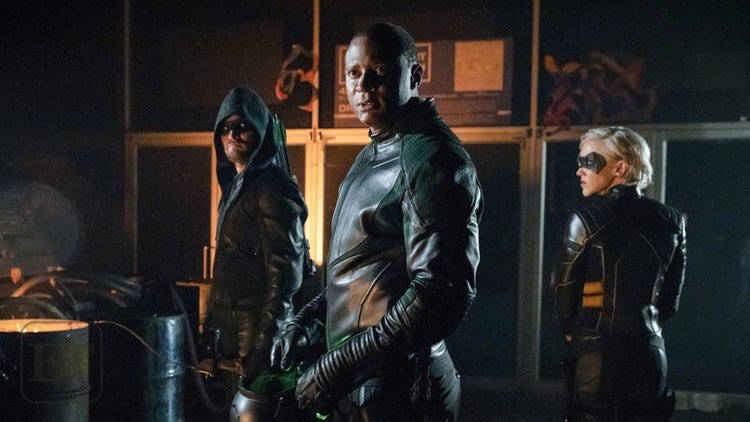 I really hate to be that guy — OK I sooo don’t — but was it any coincidence that this episode was so great because of the absence of one overbearing series-killer? Oliver and Diggle teaming up with a superhero fleet felt right and the direction the show could have stayed with after Sara’s death.

Tommy is very much like his father and is setting up his own take on the Undertaking to get revenge on The Glades for Thea’s death. With Arrow world hopping this season the performers are going to have to sell their circumstances in a short amount of time. Colin Donnell did an outstanding job showing Tommy’s heartbreak over Thea’s death. This covers a lot of ground over how Tommy could get so twisted and come up with a plan this sinister. But Oliver talks him into disarming the device using the same speech Tommy gave him back in Season 1.

I liked the subtle addition of a green glow in Diggle’s helmet and the green stripes along the jacket. When’s that ring coming? Adrian figured out Oliver was from another Earth using some advice he learned from Bruce Wayne. Nice.

The first flash forward came late enough into the episode that I wasn’t happy with the time jump. I’m still not loving the idea of a Arrow 2049 spin-off, but I was more intrigued with this future team in this episode than at any other part of Season 7. Maybe it’s the idea of the young squad working on their own? It helped that Connor was the leader and not the impulsive and annoying Mia.

John Diggle Jr (Charlie Barnett) made his official debut as the leader of the Deathstroke gang and he actually got to beat Mia in a fight. For the first time in recorded Arrow-verse history, a guy was allowed to beat a woman in a fight. Mia doesn’t take that well and plans to take care of John her way next time. Am I actually invested in this future subplot? Whoa.

The Crisis is Real

Way back when, I realized the Arrowverse had enough characters on its own to do a Crisis on Infinite Earths event. But even with each of the shows getting a crossover-devoted episode, it wasn’t going to be enough to really do the event justice. But with this episode and The Flash’s season so far, the one-two punch of Arrow and The Flash essentially serving as the Crisis prelude, it’s actually going to get a fitting set-up. 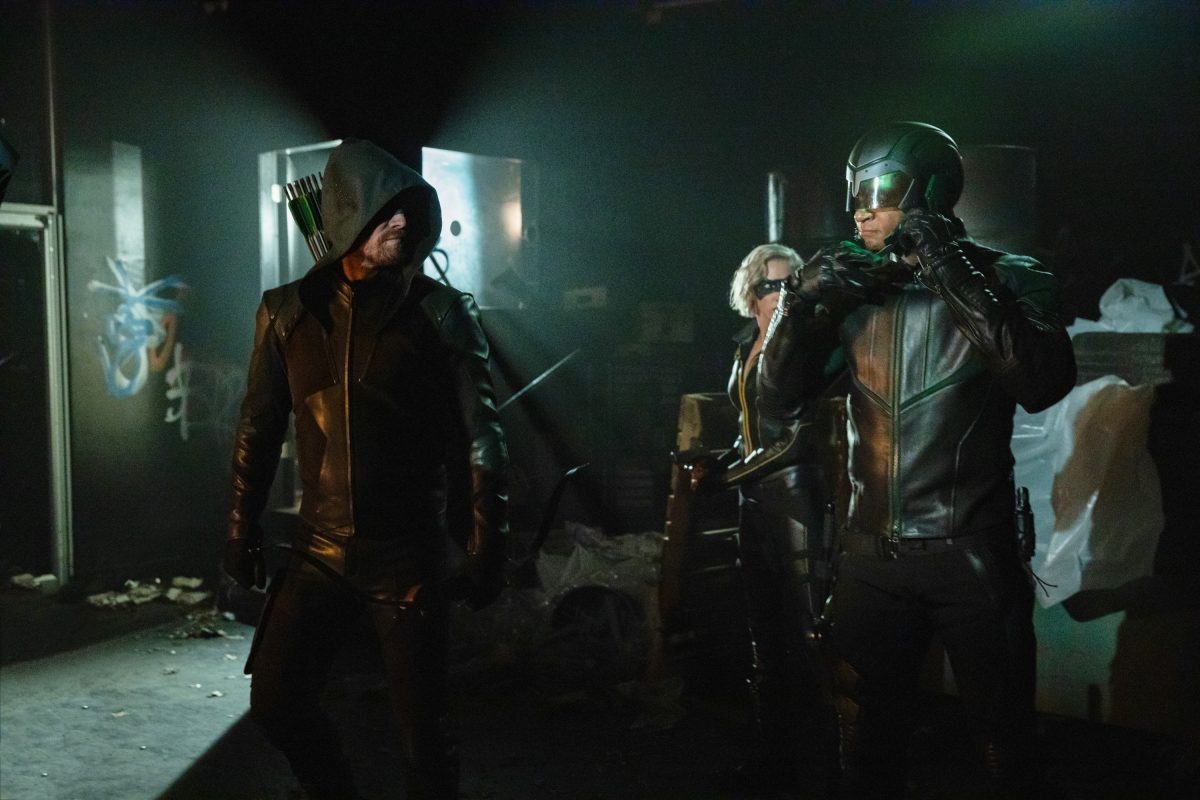 We got the first real taste of that this episode as Oliver made his tearful goodbyes to Moira and Tommy before prepping to port back home with Diggle. Before they could do that, a white wall of anti-matter started ripping through everything killing Moira, Malcolm, Tommy and everyone in its path.

Oliver was only able to get Laurel out as an Earth was wiped out. That was a shocking sequence in the first issue of Crisis and it really made an impression this episode. The Arrowverse writers aren’t playing around with Crisis and seem determined to treat it with all the seriousness it deserves. Good for them and better for us.