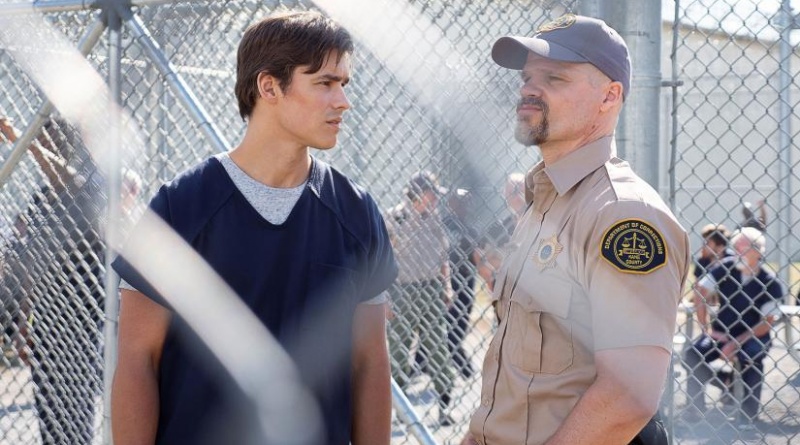 In a lot of ways Fallen felt like a season 1 episode of Titans. Mainly in the sense that the Titans were largely separated as they took various paths away from each other and it became an exercise of dwindling patience on them getting back together again.

At least in the case of Fallen there’s a purpose to the disbanded Titans. Deathstroke fully plans to kill them if more than two of them meet up for Starbucks.

Dick has taken that to an extreme by beating up some federal officers to ensure a lengthy prison stint. He’s got the main storyline this episode as he tries to not get involved in the prison politics. A guard (Evan Jones, 8 Mile) wants Dick to be his inside man, but Dick isn’t biting nor does he want to get in the middle of his three cell mates’ escape plan. This subplot doesn’t break any ground if you’ve seen any prison scene.

The big tease here is one of his cell mates introduces Dick to a legend of a bird that helps and saves people at night. This logo looks somewhat familiar as well. Since it was unlikely Titans was going to throw in a random Superman appearance, this was a pretty good way to expose Dick to some inspiration for Nightwing. Despite his intended neutral stand, Dick does decide to help his cell mates break out though for some misguided reason, doesn’t bother breaking out himself.

Maybe Dick has the right idea as the rest of his pals keep calling him up to help. Donna wants his aid in tracking down Rachel, who befriends a girl at a local soup kitchen. When her handler/pimp threatens her, Rachel unleashes her Raven effect to slam him against the wall. It did not seem like Rachel was aware a part of her soul self went after the guy and mauled him. This was an effective way of showing Rachel is losing control over the dark force within her. Still, I’d just as soon wished Rachel and Donna were spending time bonding in a similar manner to how Rachel connected with Kory.

Gar and Conner reconnect thanks to Krypto triggering the Ring at Titans Tower. Conner’s run-in with the police put him back on Mercy’s radar and it doesn’t take long for her Cadmus crew to bust in and take out Krypto with a Kryptonite net and Gar with tranquilizers. We’re definitely reaching the point where Gar needs to turn into a menagerie at every possible moment. The tiger was cool, but it’s such a small sample of how he should be used.

Mercy gets the big win here as Conner agrees to return to get fixed by the fine folks at Cadmus and Gar reveals his greatest wish is to be a Titan. Maybe this will be an avenue to explore Gar expanding his power set? If that’s the case, I’m all for it.

Fallen was OK, but really didn’t do much to advance the main season arc. There’s only three more episodes left and it’s starting to feel like Season 2 is going to end on an abrupt cliffhanger note like its predecessor. Given the title of the season finale things seem like they’re heading in the right direction, but the show needs to start regaining its momentum instead of slowing down. And the best way to do that is to get the Titans together again.