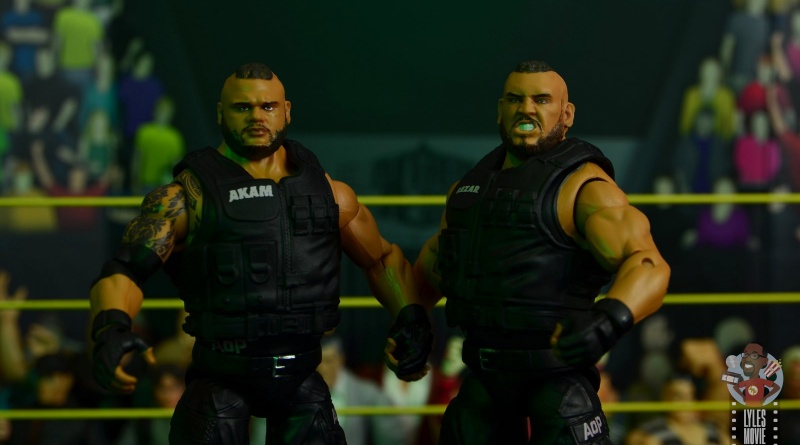 The Authors of Pain are another reason why the Raw and Smackdown creative teams are so lame. These guys steamrolled the competition in NXT and had a series of good matches as the demolishing brawlers. After a few months on the main roster they’d been reduced to comedy. Fortunately, I don’t need WWE creative now that Mattel has released Akam and Rezar in the Elite 62 wave. Let’s see if these guys bring the pain.

Packaging:  For the 60s series, Mattel went with a white color scheme with red and black accents. It looks good and showcases the figures nicely. I’m not a fan of the same bio for both guys. Otherwise, I like the layout with the stats on the side and the rollout of the rest of the wave at the bottom.

Likeness:  The AOP was released right as Mattel was starting to get more comfortable with its face printing technique. The likeness on these guys is amazing. It’s a little surprising that Mattel went with the package art since both Akam and Rezar have drastically different hairstyles now. 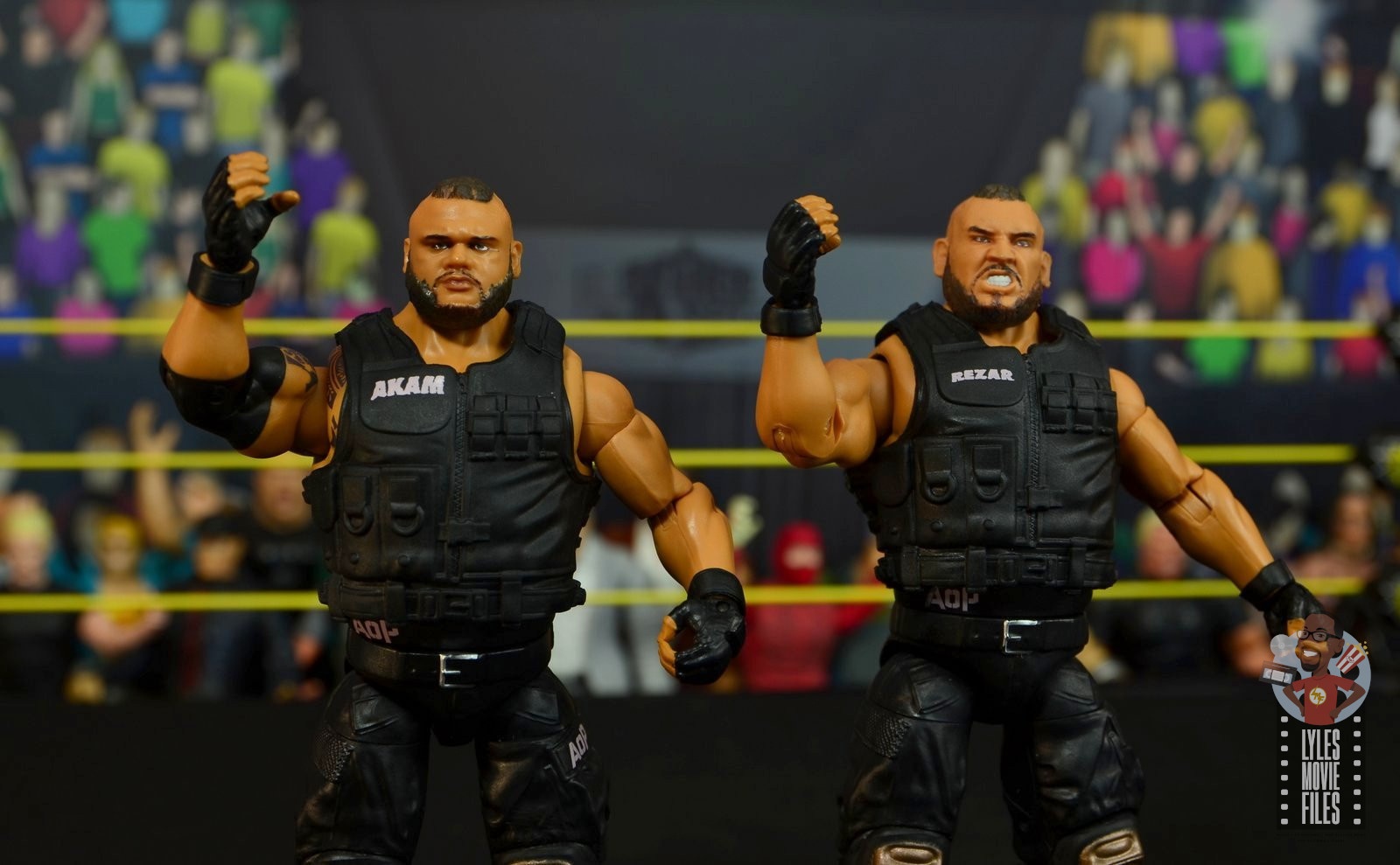 A lot of times Mattel’s yelling head sculpts aren’t all that effective, but Rezar’s looks very convincing. Akam might look a bit too pensive, but the likeness is dead on.

Paint:  AOP don’t require extensive paint jobs so it’s all about the minor details like the lettering on their vests and the gold knee pads. The paintwork on the faces is exceptionally well done given the facial hair.

Articulation:  Akam and Rezar are massive brawlers and don’t need a ton of articulation for hurricaranas or anything. They’re not going to bust out any submission moves either. These guys have all the articulation they need but I wish they had a smidge more range in their shoulders to make their power bombs easier to pull off. 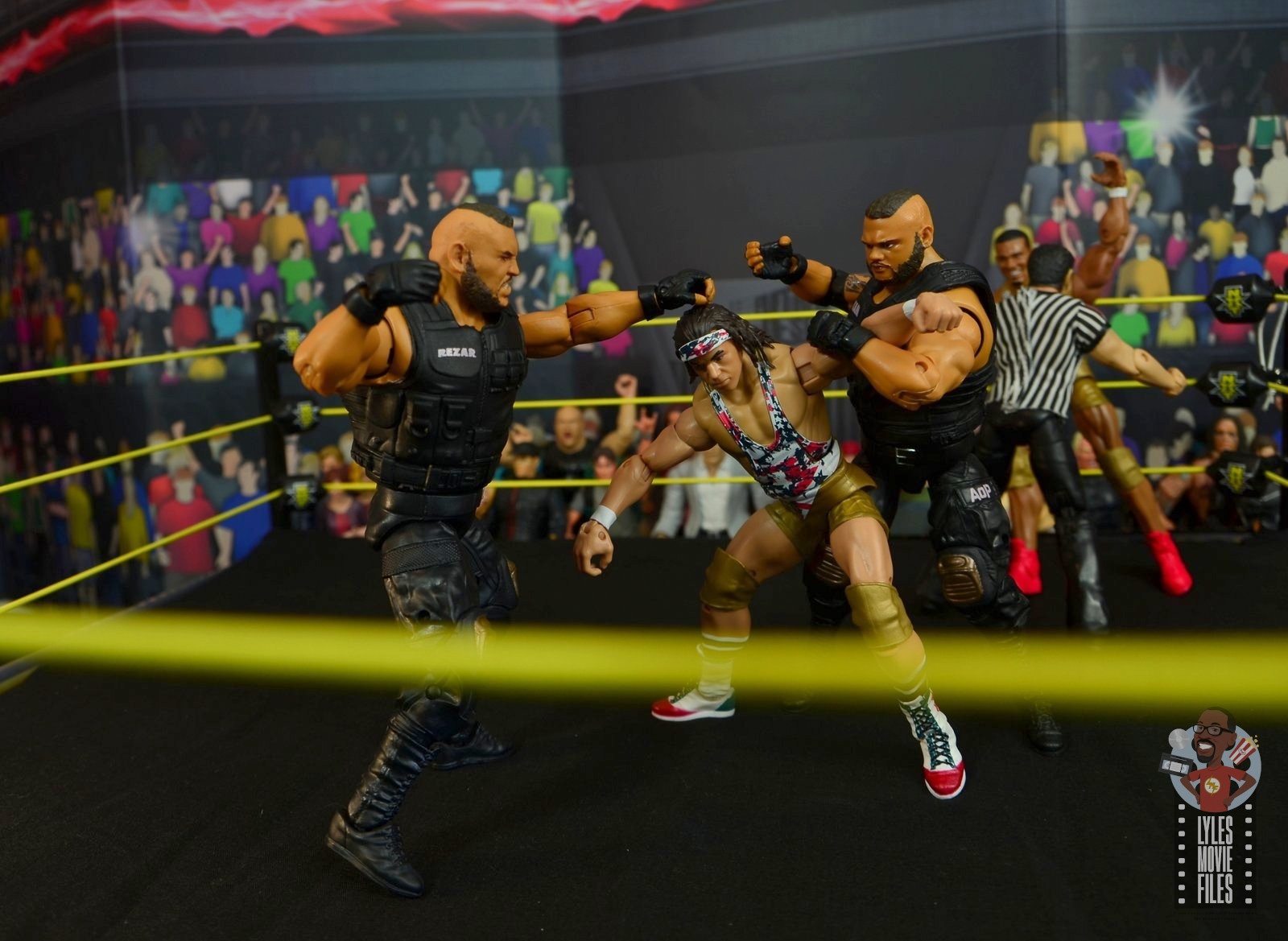 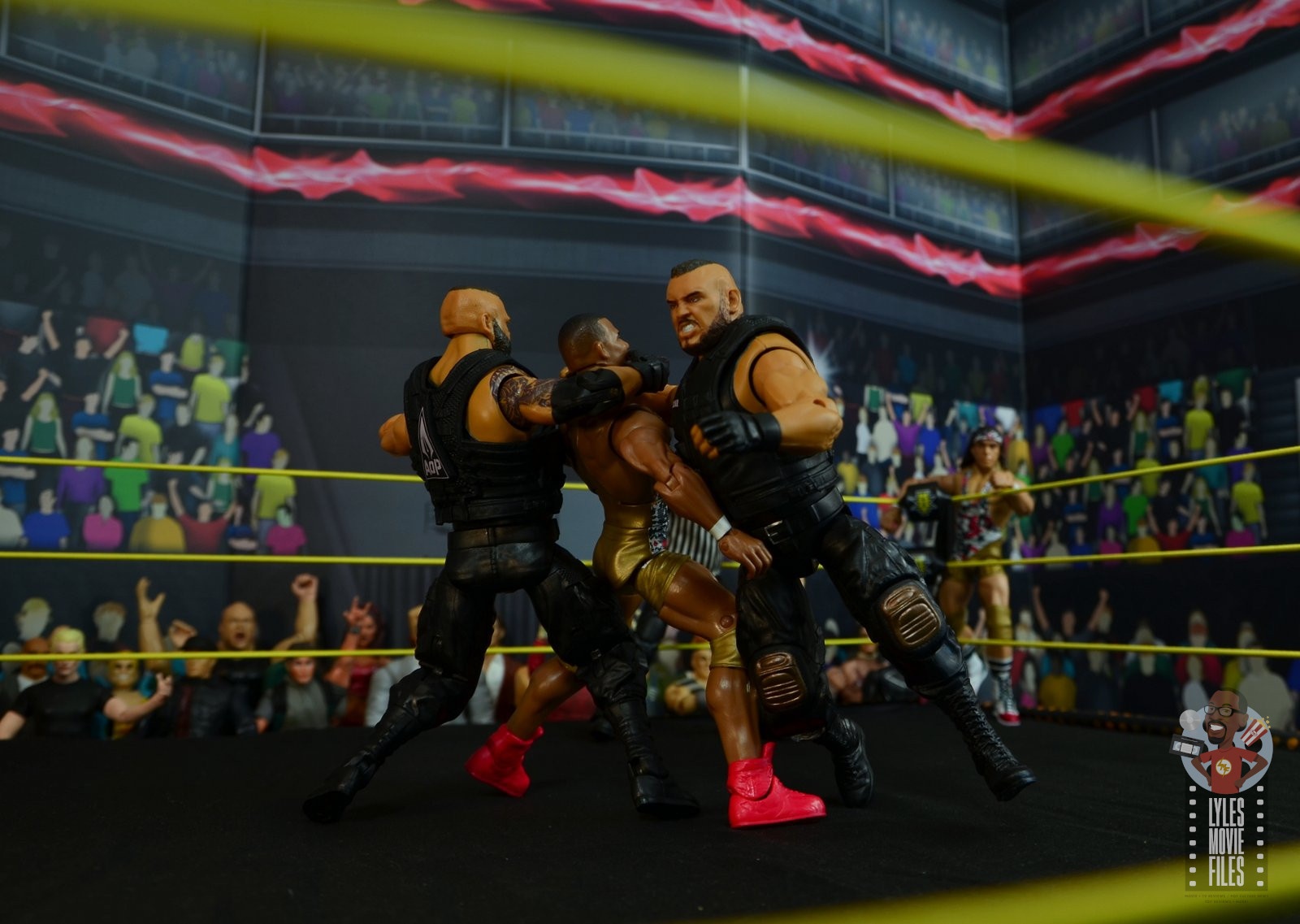 Akam and Rezar have: 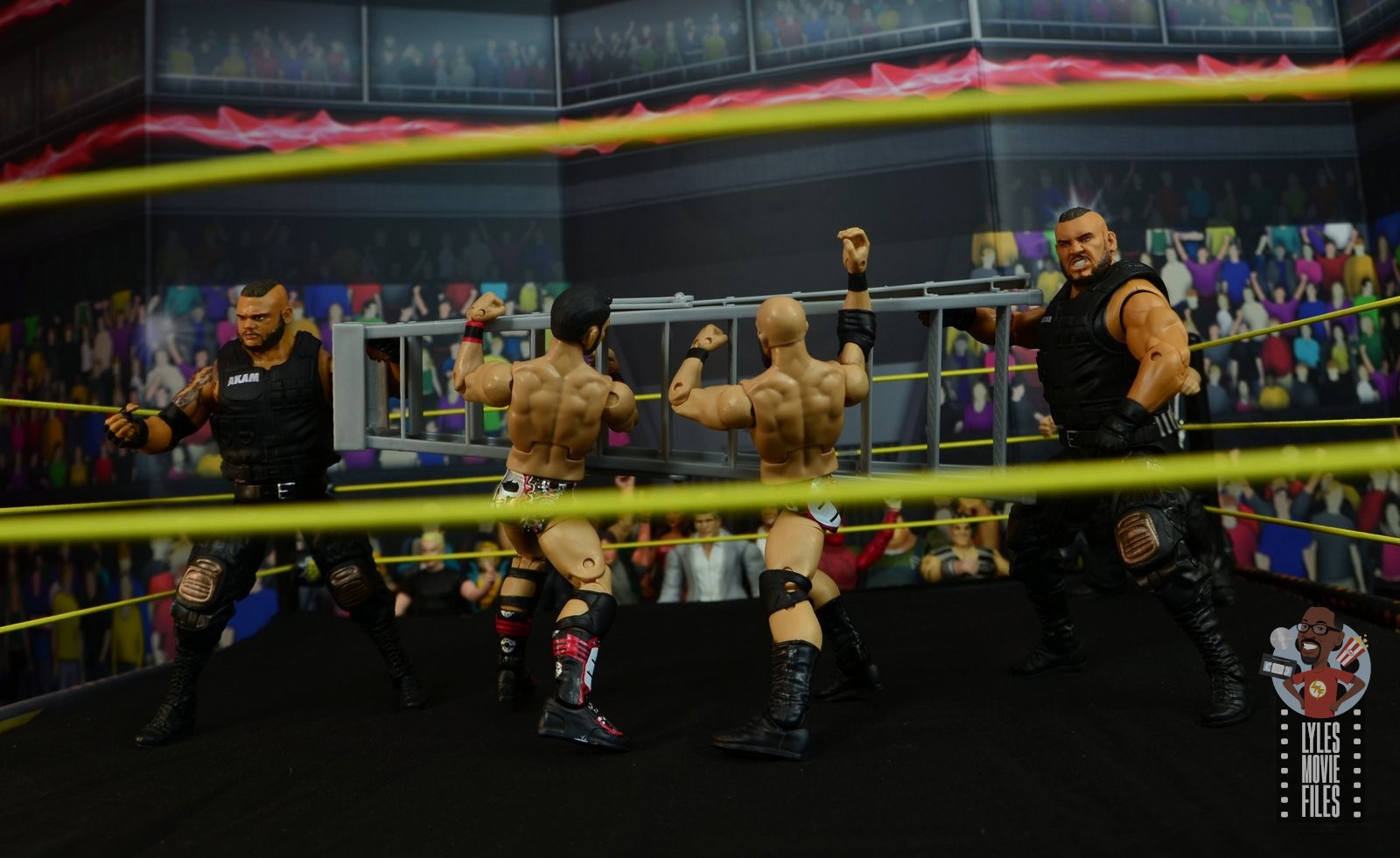 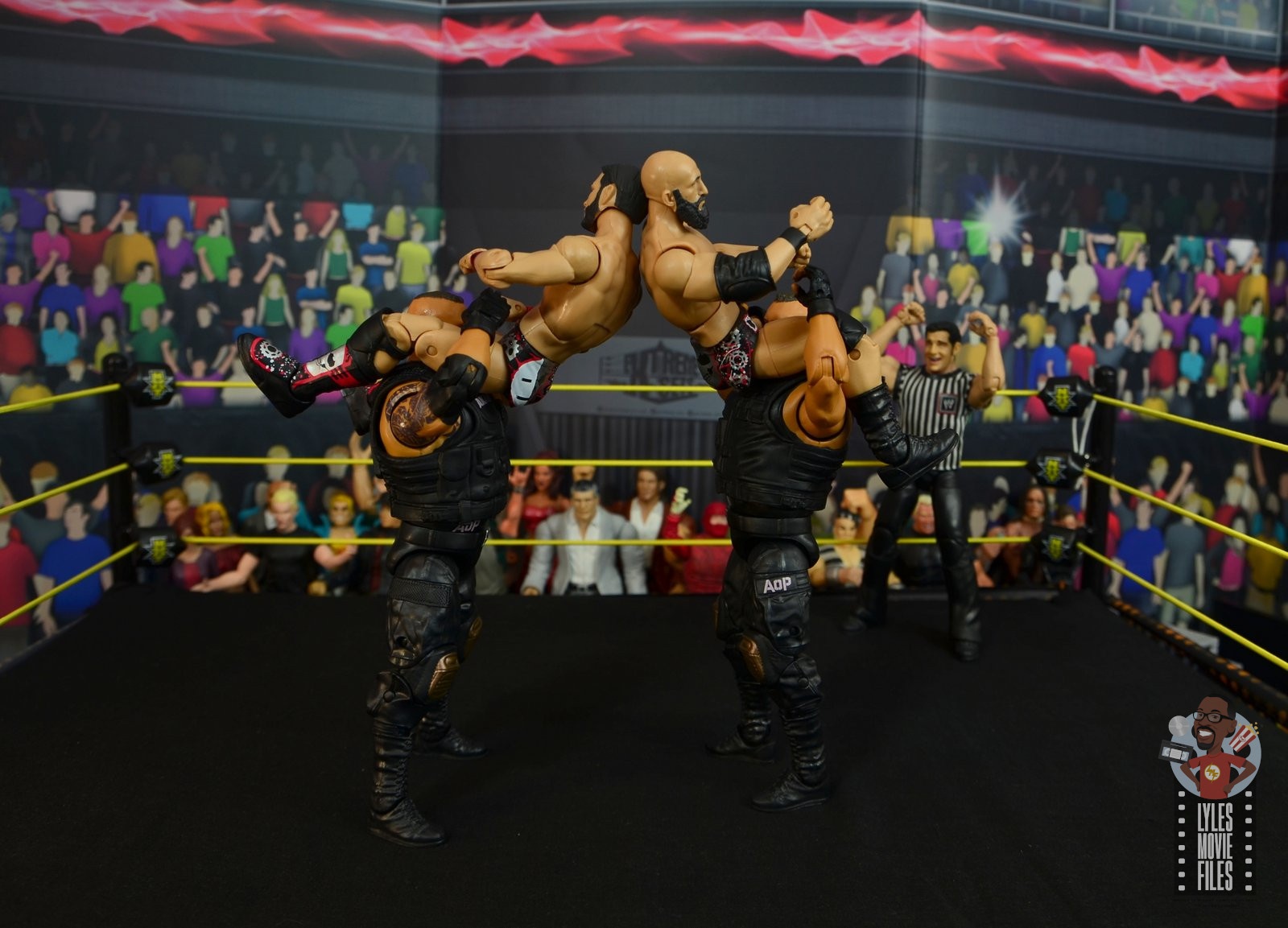 Accessories:  Akam and Rezar get their entrance gear helmets. They’re intimidating enough that they could make for good grunts as Marvel Legends goons. 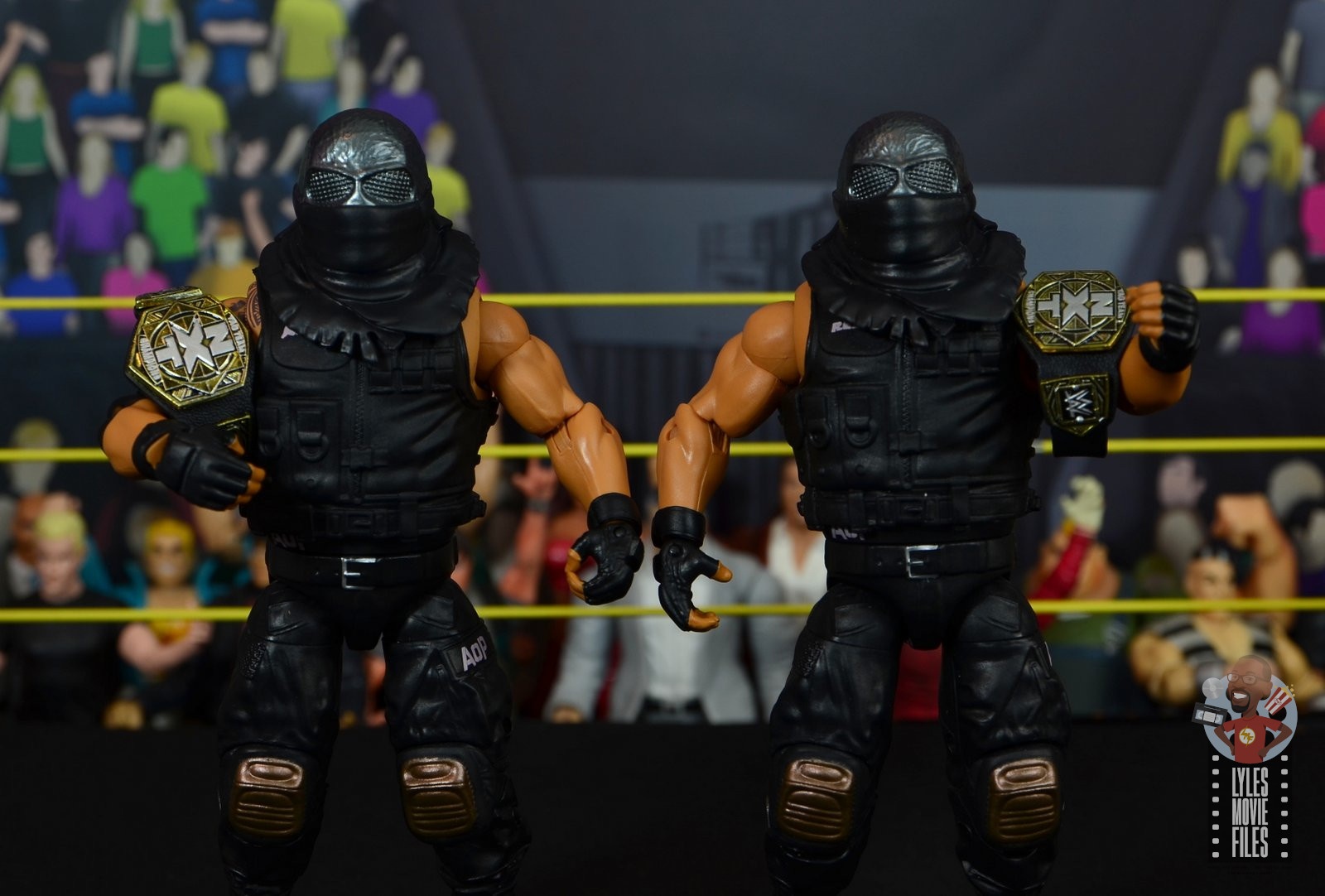 Additionally, they come with the newer NXT tag titles. I like the plating and paintwork and they’re a major upgrade over the old versions. It didn’t dawn on me to actually take the vests off since they wrestle more without them until very late in the shooting process. The articulation wasn’t hindered by them, which is why I didn’t bother taking them off. They do snap on and off without any trouble and definitely are another accessory so we’ve got a comprehensive AOP and no real need for new versions.

Worth it?  You can get both of these guys now for $30. Not a bad price for these guys. This is where we occasionally get more for our money as these guys are bigger than the standard Elite figure.

These guys come really close to perfection, but those wide chests and shoulder joints do just enough to restrict better movement. Otherwise Mattel did a very solid job on the Authors of Pain. Hopefully Mattel will revisit those plans to make a Paul Ellering figure.