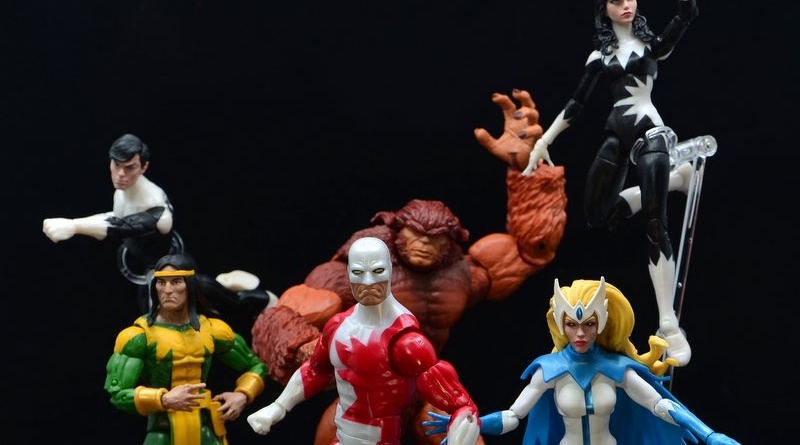 Black Friday came early this year for Marvel Legends fans with the release of the Alpha Flight set. I couldn’t tell you my favorite Alpha Flight story, but I’ve always liked the characters and they’ve been a huge want since the Build-A-Figure Sasquatch was revealed. Besides, my Guardian figure was getting extremely lonely. Let’s see if this set will warm my heart too.

Packaging: Hasbro tends to go all out for the special set presentations. Alpha Flight gets a fun comic book style front while the back shows them in an appropriately wintery theme backdrop.

Of course, I’d love something more in the write-up than their name and code-names, but Hasbro clearly knows this set is for fans who know the respective powers and other brief details they’d normally put in these bios.

The figures are arranged three to a row and yes, I did have fun taking them out individually and shooting them before moving on to the next figure. 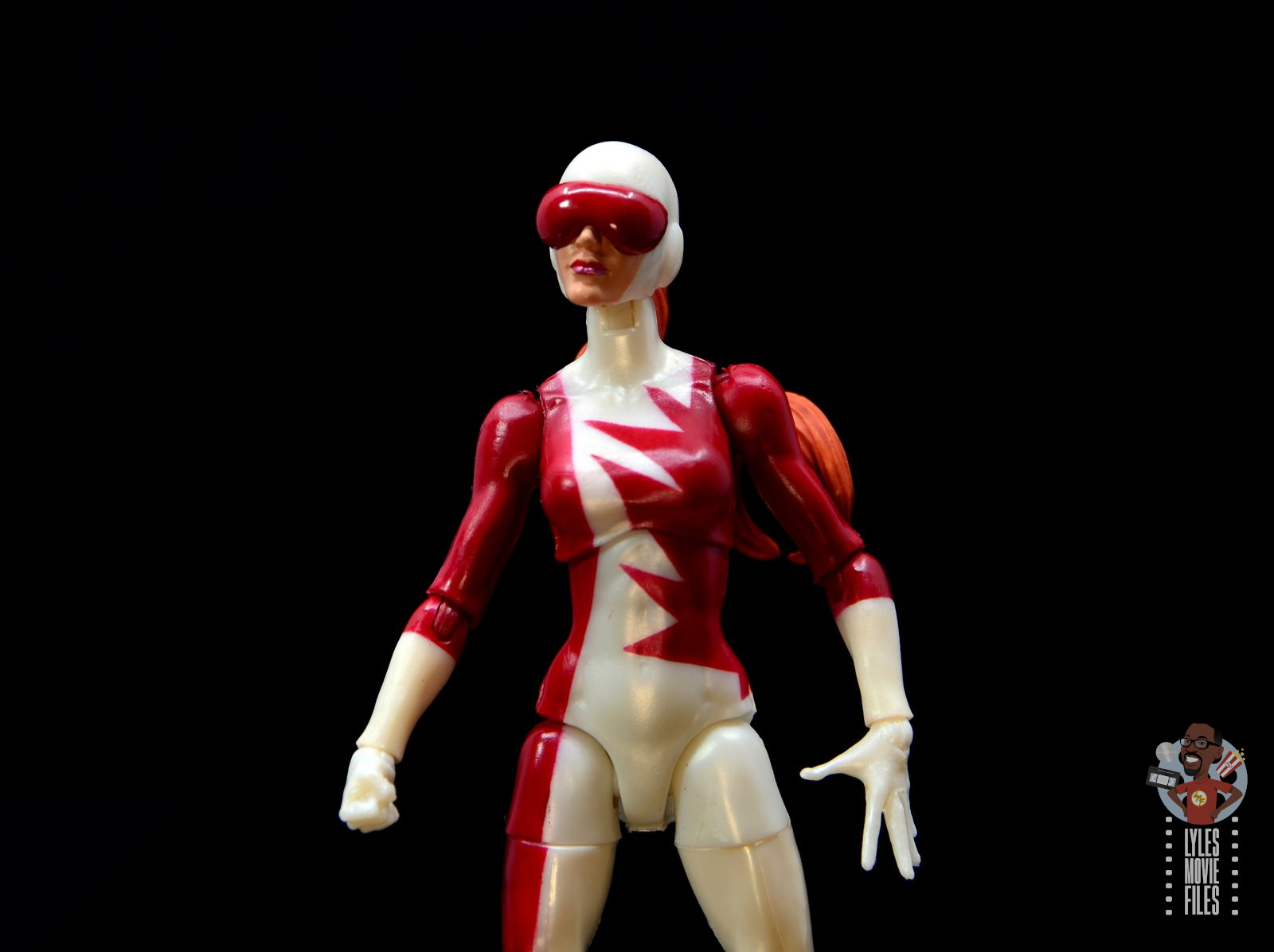 Vindicator is the most plain in this category. I think the sculpt emphasizes the goggles/visor a bit too much, but otherwise the figure is exactly what I’d expect. I do appreciate Hasbro giving her a fist and a gesturing power blast effect hand. 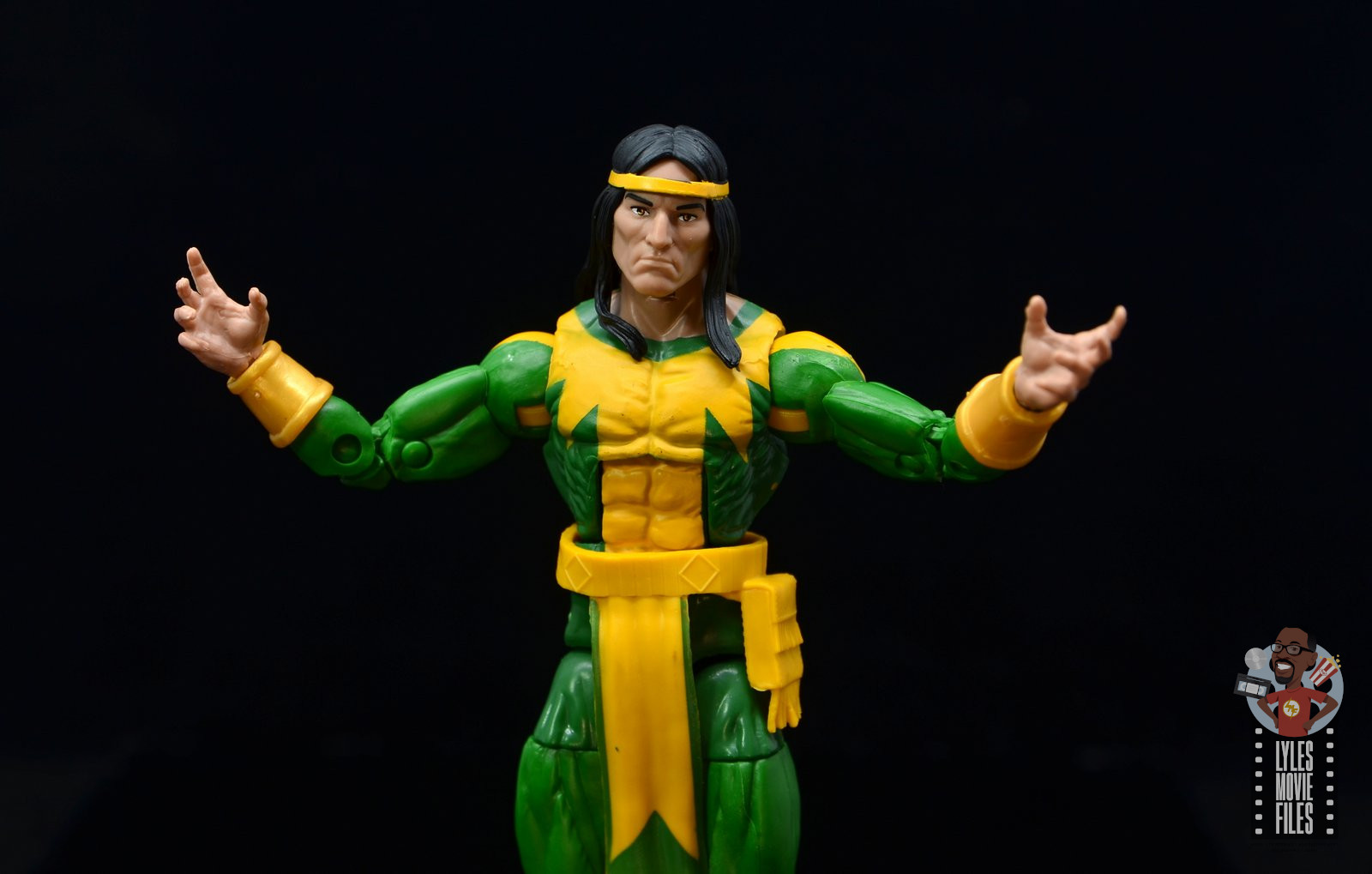 My immediate thought when I pulled Shaman out was that Hasbro could easily re-purpose this head sculpt for a Spirit-Iron Knife figure for a 6-inch GI Joe line. Seriously how much money is Hasbro leaving on the table by not making a 6-inch Joe line??? Sigh.

Shaman looks great beyond that fantastic head sculpt. He’s a figure that doesn’t require a heavy tooling, but what Hasbro did with the skirt with the belt with patterns and pouch came out very nice. Shaman is one of those characters whose look won’t win him a lot of figure of the year votes, but he’s done extremely well. 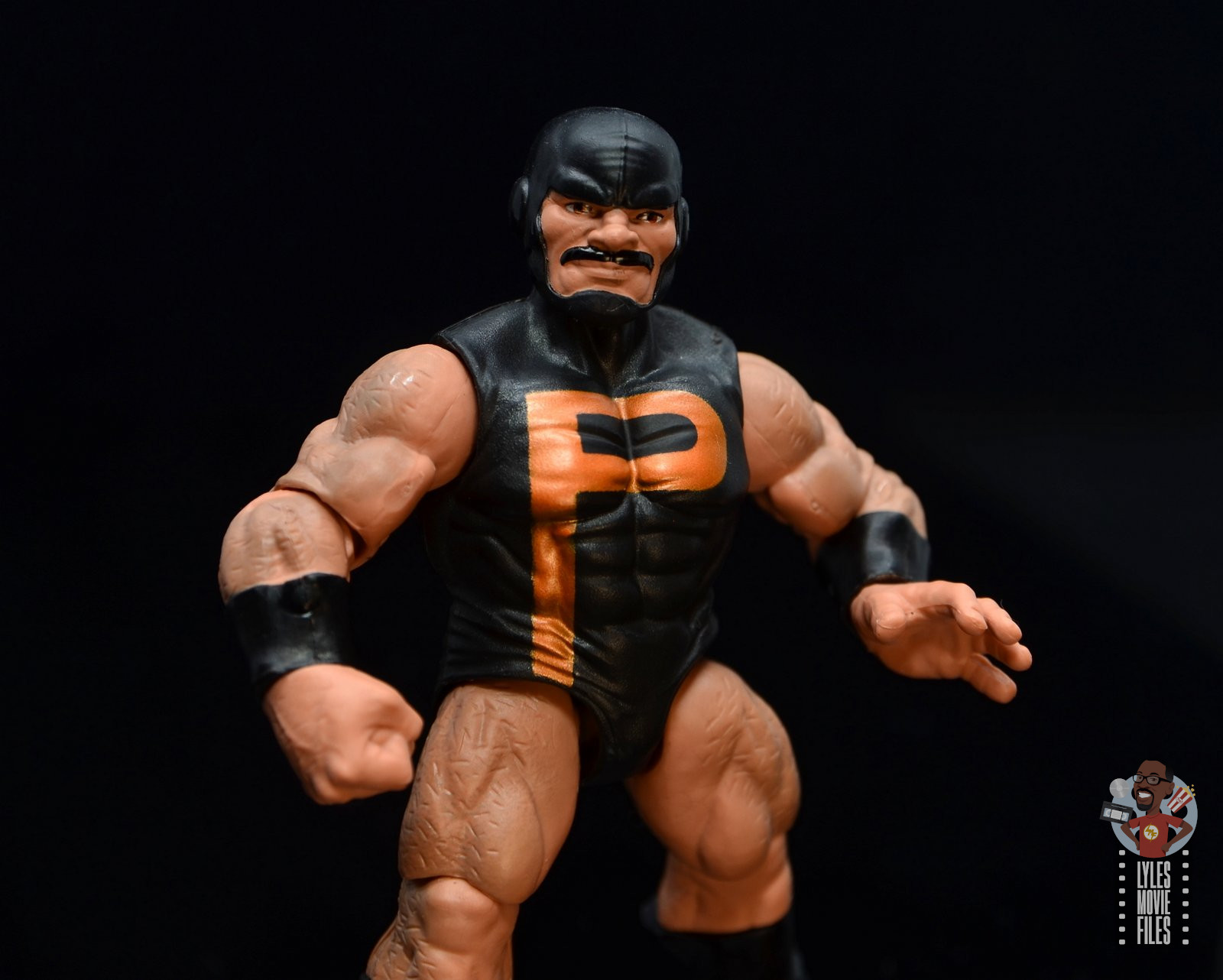 Puck – For those collectors who excel at the figure lottery of finding hard to find waves, Puck is mostly a retread of the Build-A-Figure Puck. The biggest difference is Hasbro fixed up the tiny head issue with a sized-up version. It makes a major improvement. 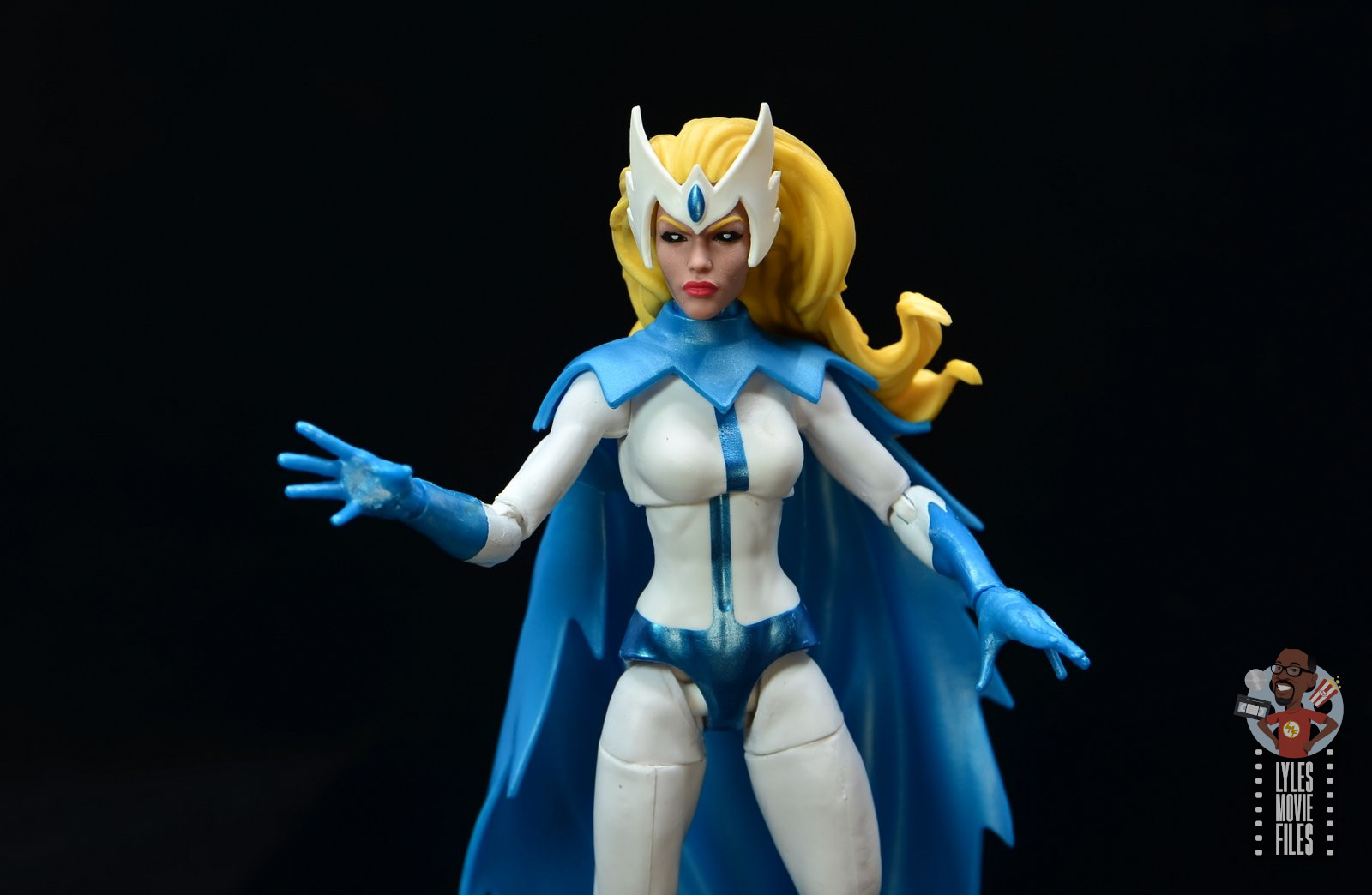 Snowbird has this well-done head sculpt that conveys her demi-god background. Her cape sprawls out well without getting in the way and she has this regal presence. This is a really nice figure that was one of my surprise favorites of the set. 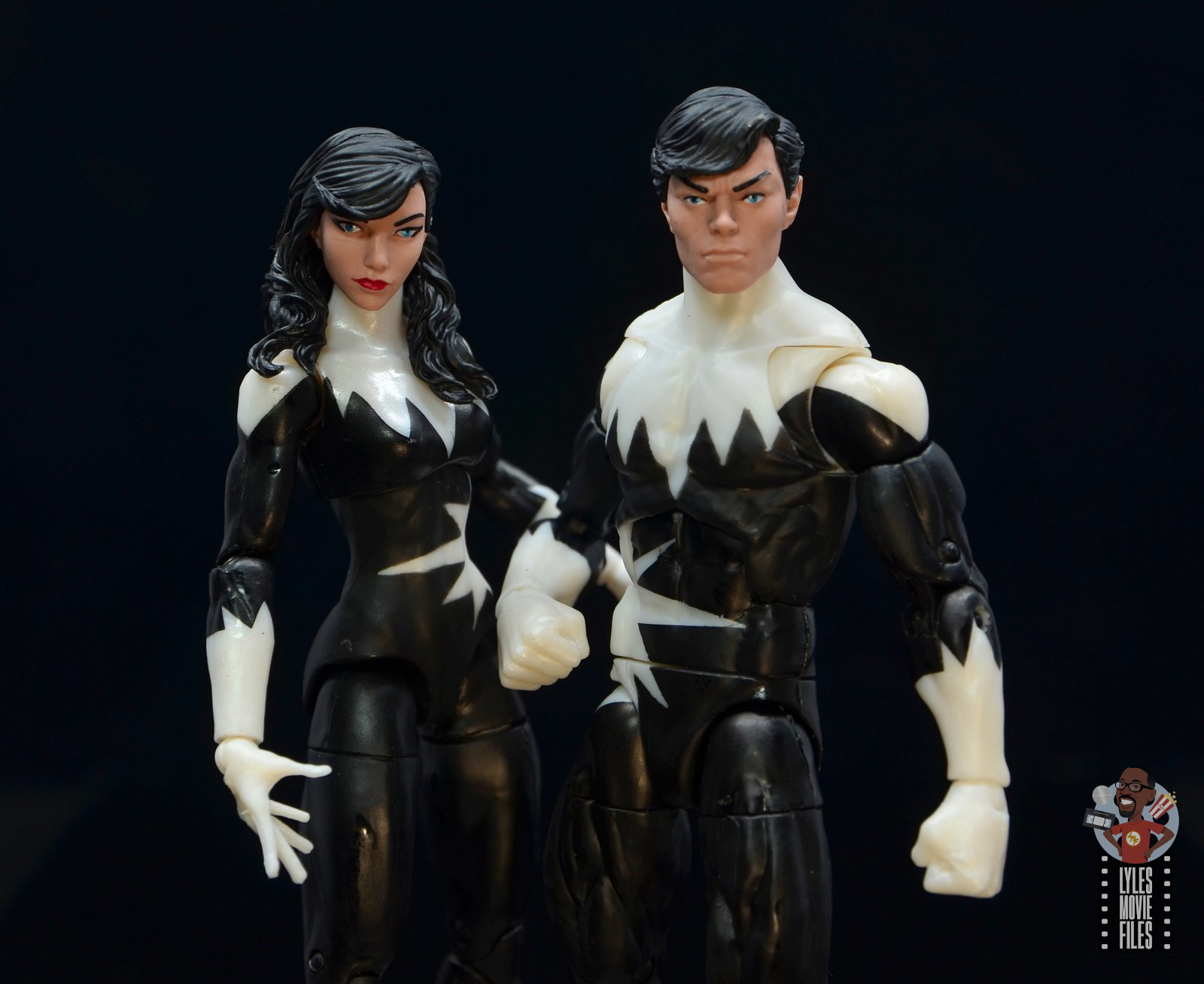 Northstar & Aurora – Northstar really looks like a John Byrne drawing come to figure life. He’s got the hint of cockiness and edge that’s perfect for the character. Aurora is fine although she doesn’t have that same magical Byrne likeness. Like Northstar, she has the pointy elf ears shown in the comics. 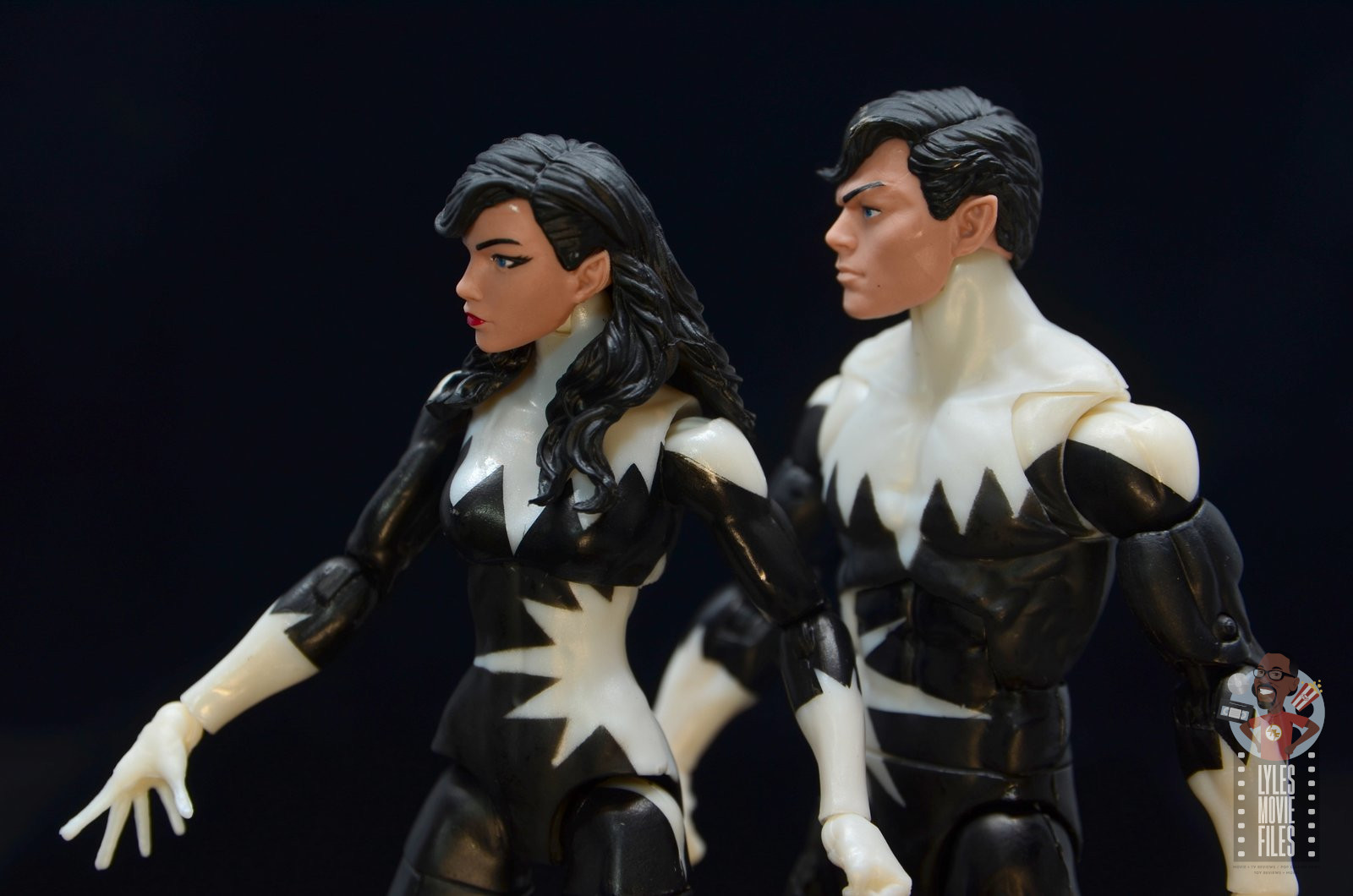 Scale: For the most part everyone is on the same scale. Snowbird is appropriately taller than Vindicator and Aurora while Shaman and Northstar are average height and just slightly shorter than Guardian. 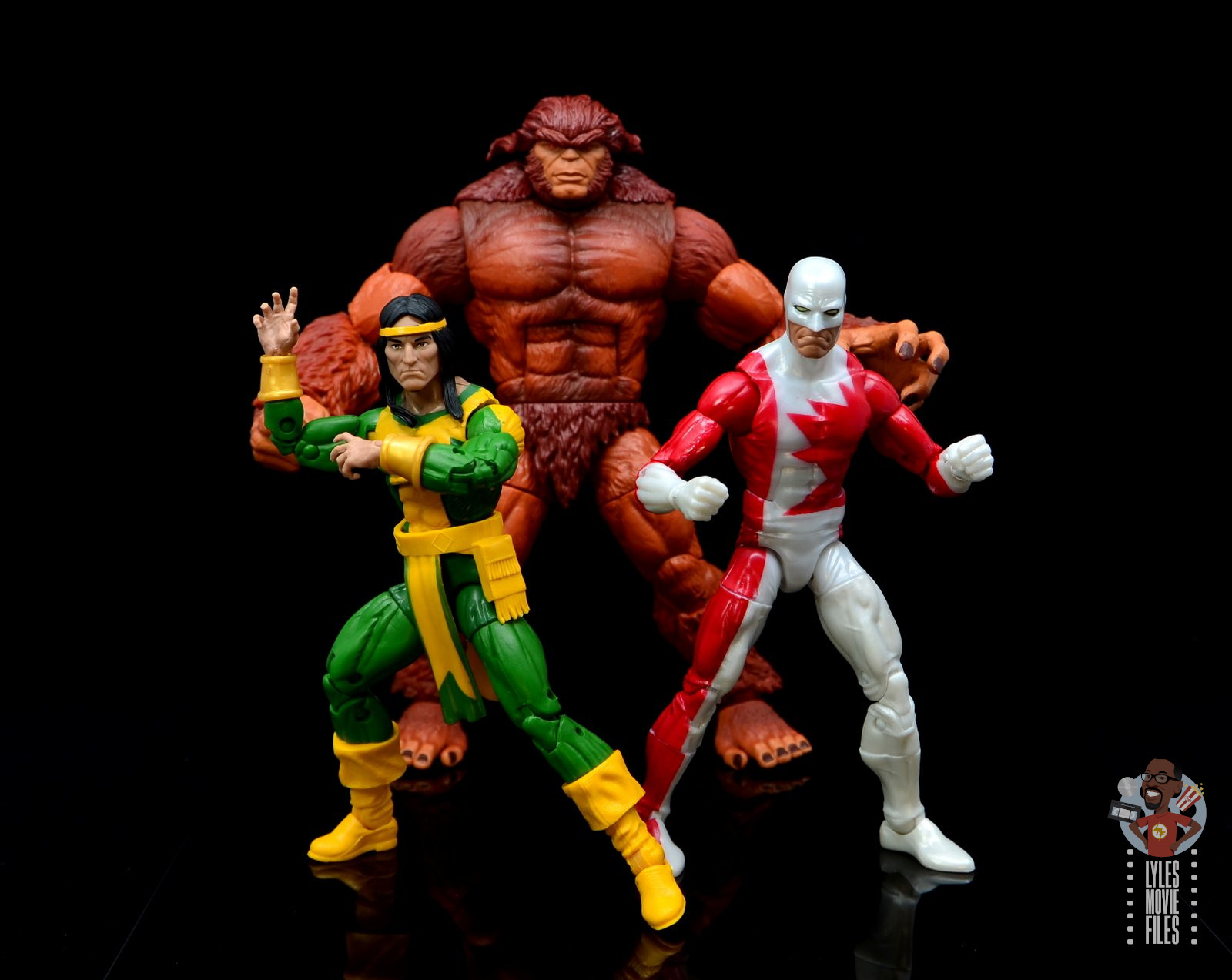 Puck might be just a smidge smaller than he was portrayed in the comics. From my rough estimates, he should come up to just under Snowbird’s waist. I feel like that’s being extra picky and his size is fine with me. Die-hard Alpha Flight fans might think differently though. 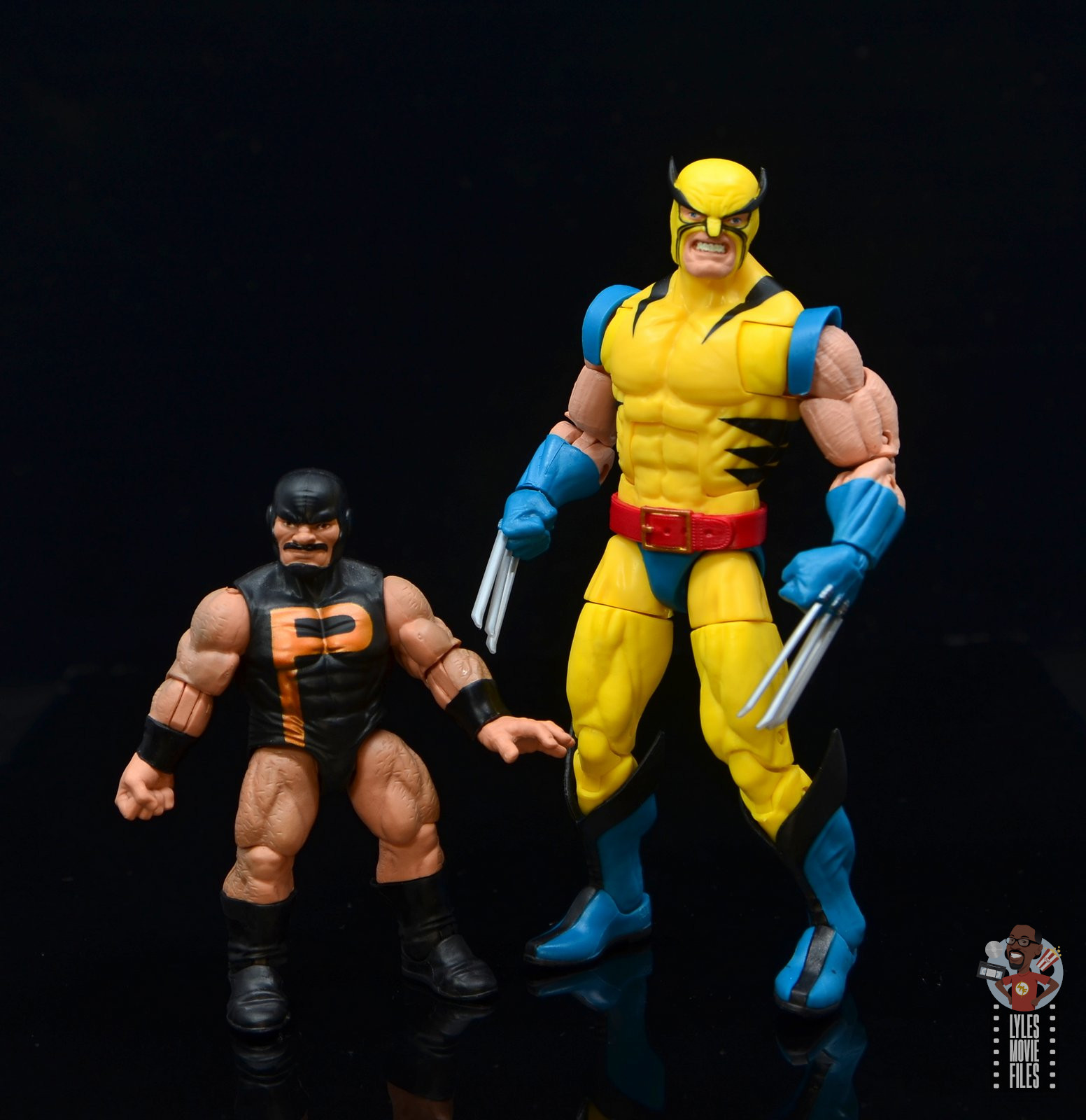 Paint: The scary thing about getting a multi-figure set is worrying about most of the figures having good paint applications, but one figure that came out terrible. With six figures the odds seem pretty good someone is going to get botched. That wasn’t the case at all here, which was pretty impressive.

Vindicator – one thing that really stood out was how the red of her attire is closer to what I think most of us expected out of Guardian. It’s a deeper, darker red that contrasts better than Guardian, whose red was more subdued. 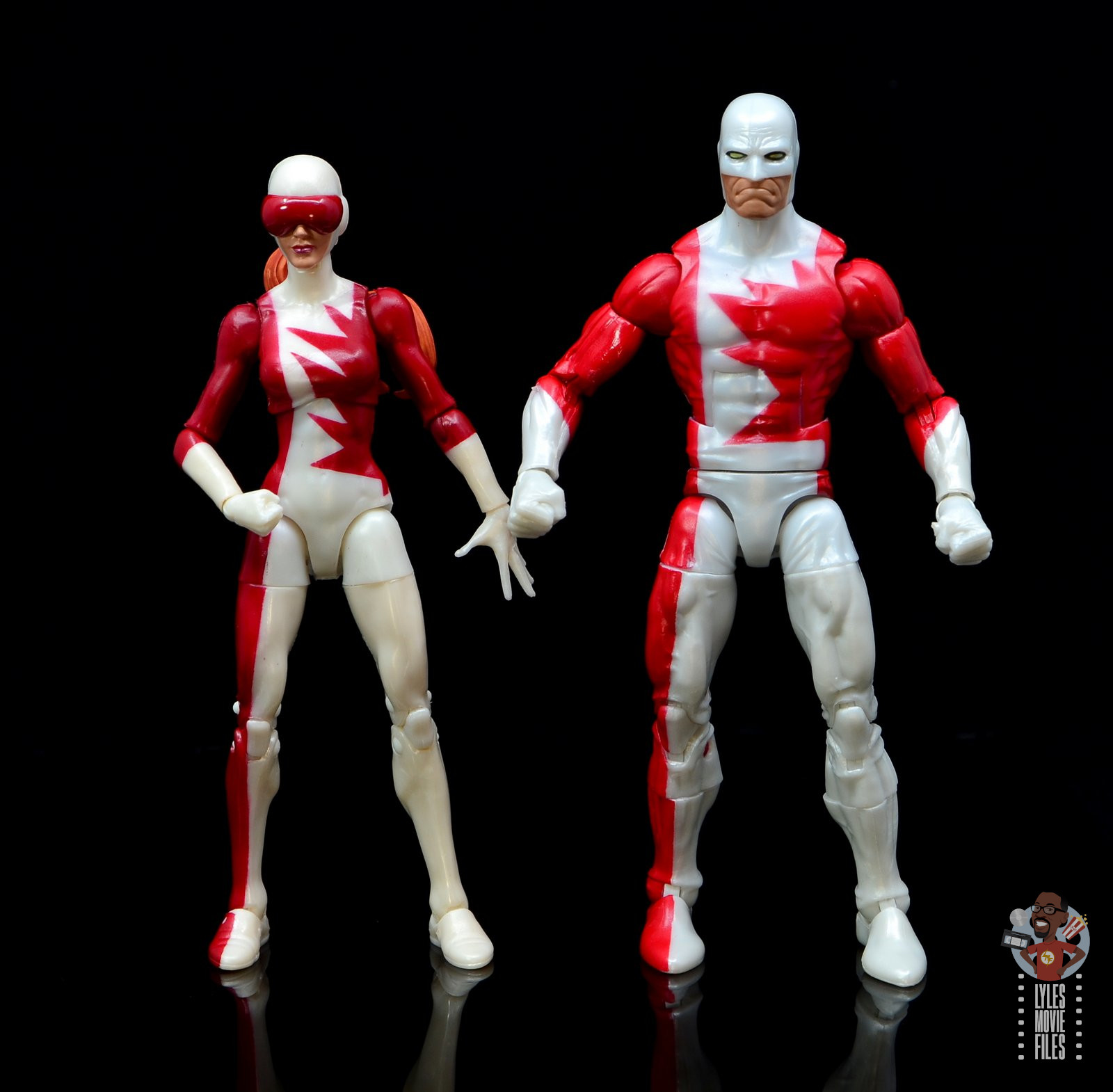 I think the visor has a little sheen to offer a slightly metallic look. Heather’s ponytail also has a slight wash to help pull out the details in the hair sculpt. Given this tricky costume with the Maple Leaf, I was most impressed that she didn’t have any line work or overspray issues.

Shaman – Yellow is notoriously hard to pull off since it needs so many applications in order to prevent bleed through. Shaman’s attire has a lot of yellow, but it’s one of the better jobs I’ve seen in a while. The linework is clean. Ironically, Shaman’s costume is more of an orange yellow that Hasbro uses for the X-Men base yellow. While inaccurate I like this as it helps him to stand out more from Sasquatch.

Puck – Stature aside, Hasbro didn’t shortchange Puck on any paintwork. The linework around his cowl is solid and the P is clean and bold.

Snowbird – Snowbird has a cool mix of Hasbro also used some blends for her hair to give that mix of platinum blonde. Colorists tend to give her a very light almost periwinkle shade of blue while the figure has more of a sky blue for the cape, gloves and boots and a metallic blue for the jewel, chest stripe and shorts.

It’s an interesting choice and while it breaks up the uniform consistency, it’s not a big enough change to get worked up about. The sunken eyes also help give her an otherworldly visual and her stark white outfit really pops.

Northstar and Aurora – Next to Vindicator, these two were the ones I thought could prove the most problematic in terms of the precise details of their costumes. Again, no problems here as everything is sharp. I really like the bright blue used for their eyes as it helps give them more of a unique almost magical look.

Articulation: You know the regular breakdown of the articulation. 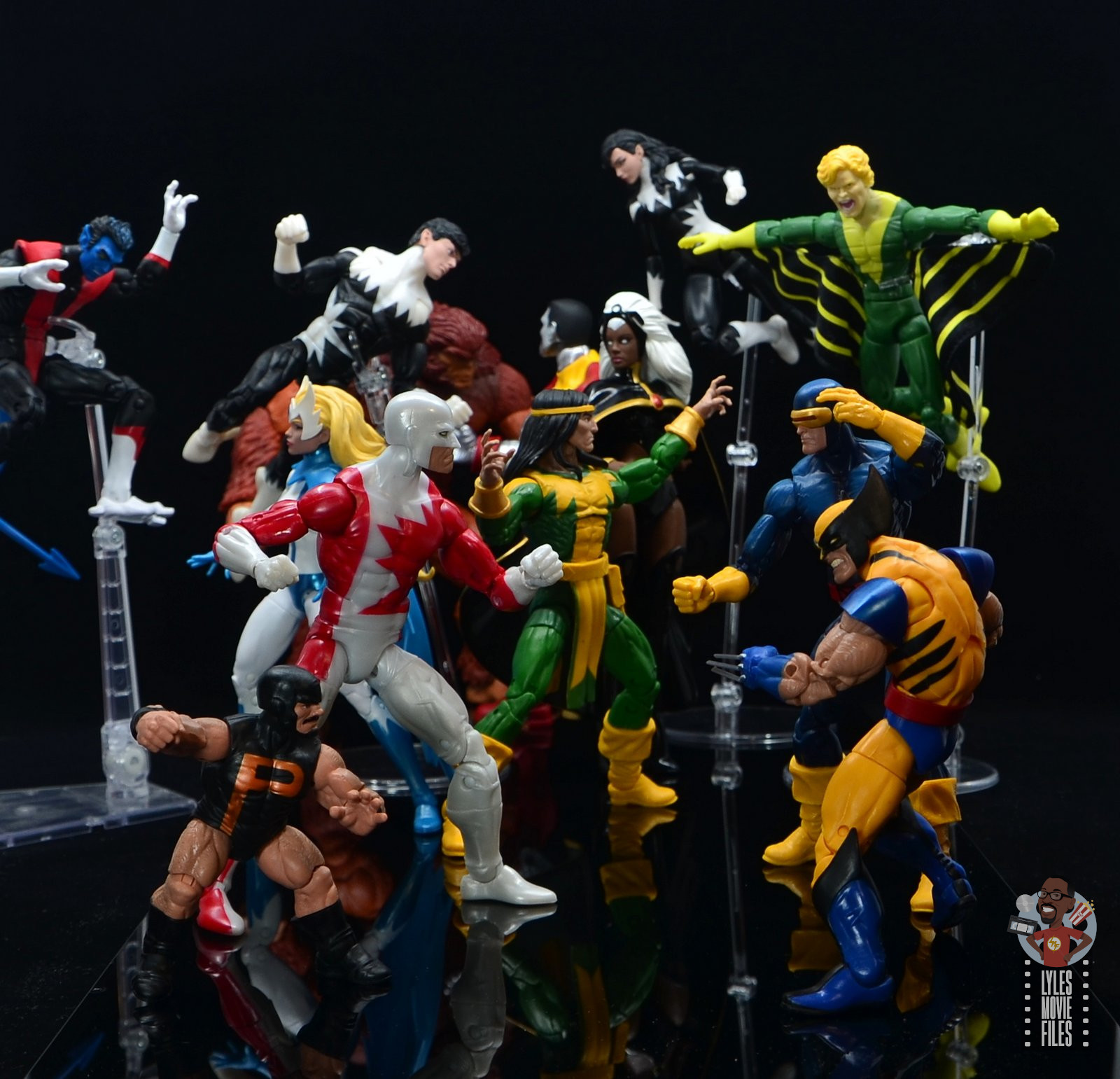 Naturally none of the female figures have bicep or waist articulation, but the figures are still a lot of fun to pose. Here’s just a few notes. 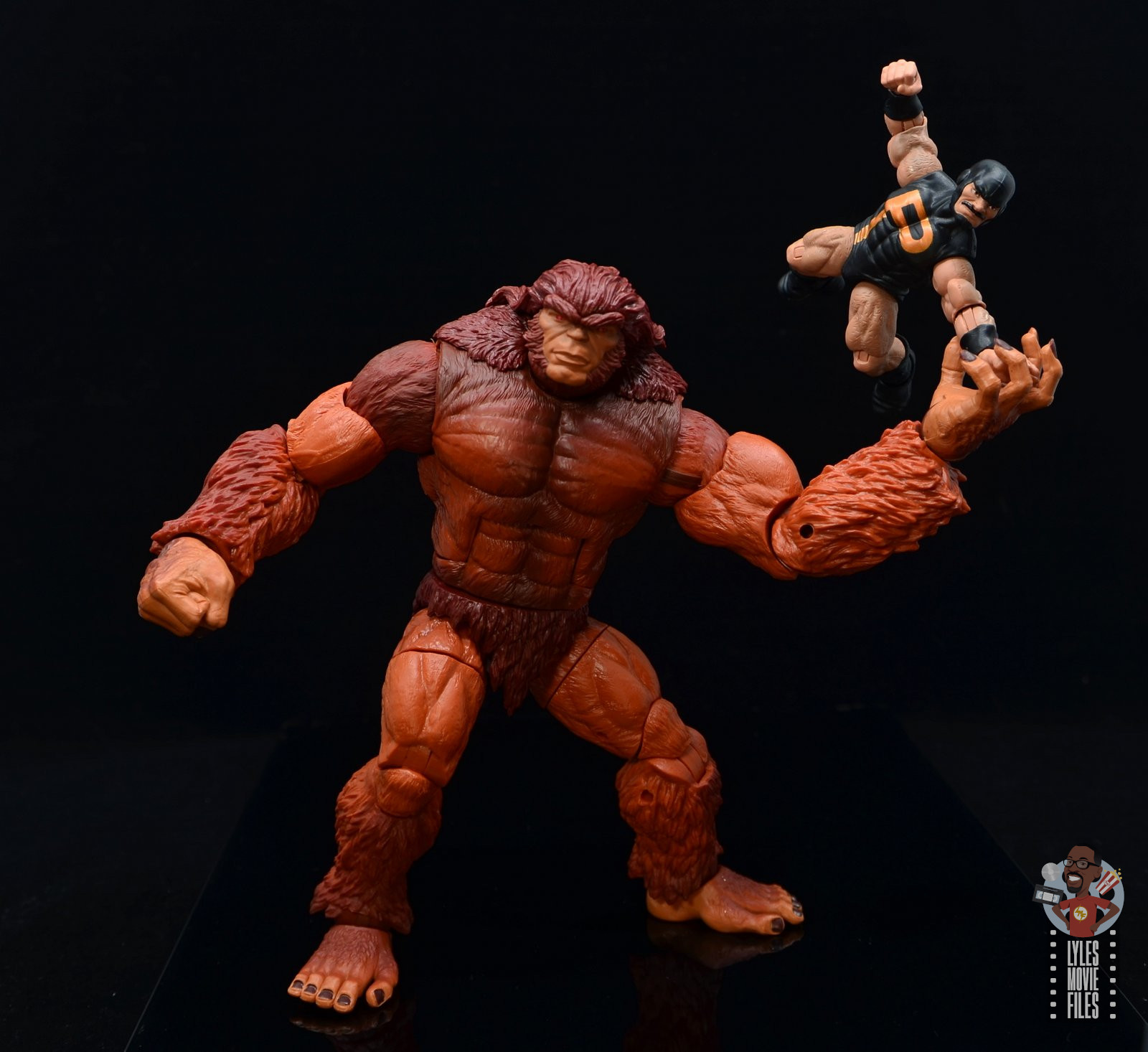 Snowbird is a little top heavy thanks to the weight of her hair, but you can find sweet spots to balance her without much frustration.

Vindicator’s ponytail is articulated so you can move it as needed for various poses, which is a great touch. 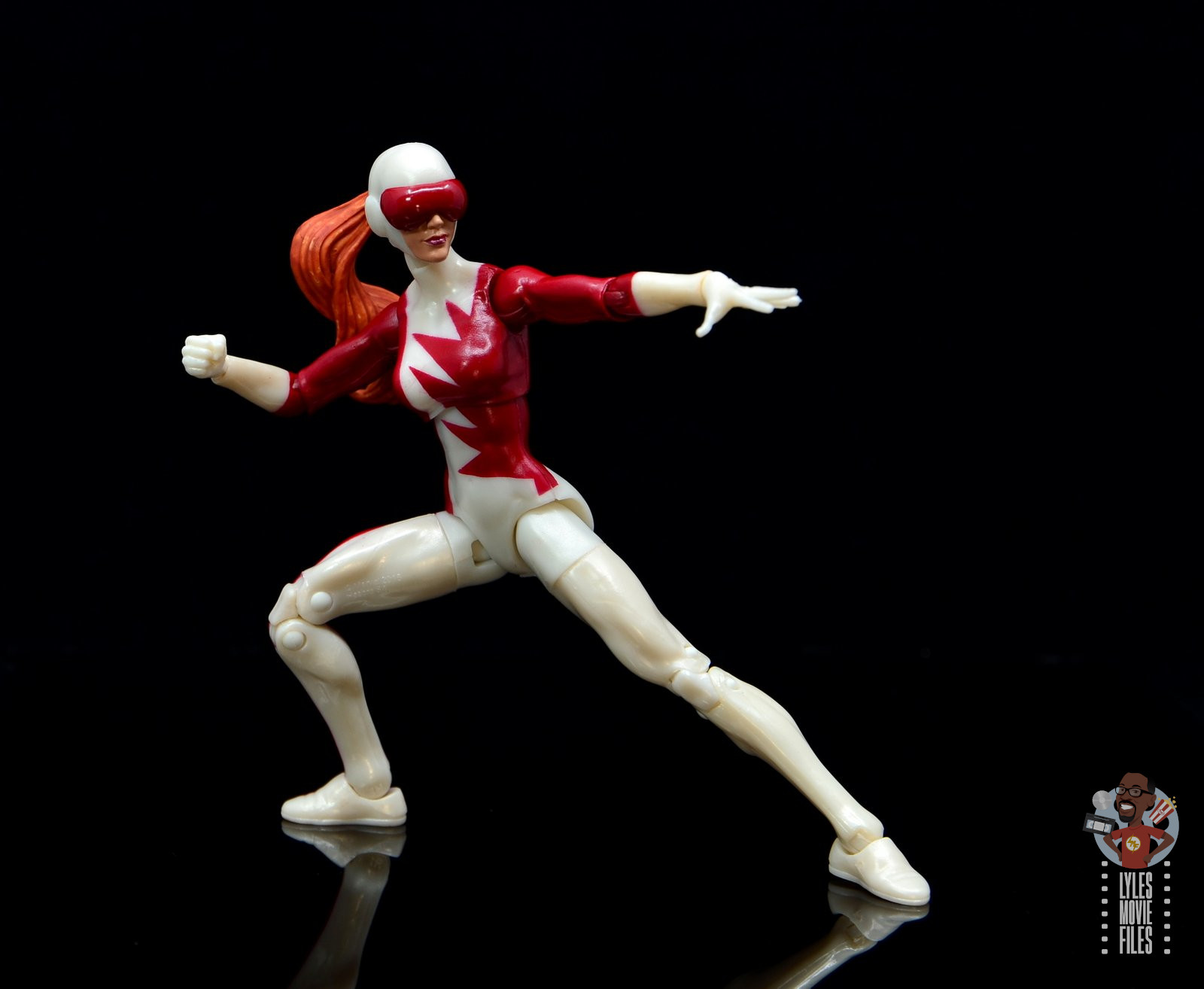 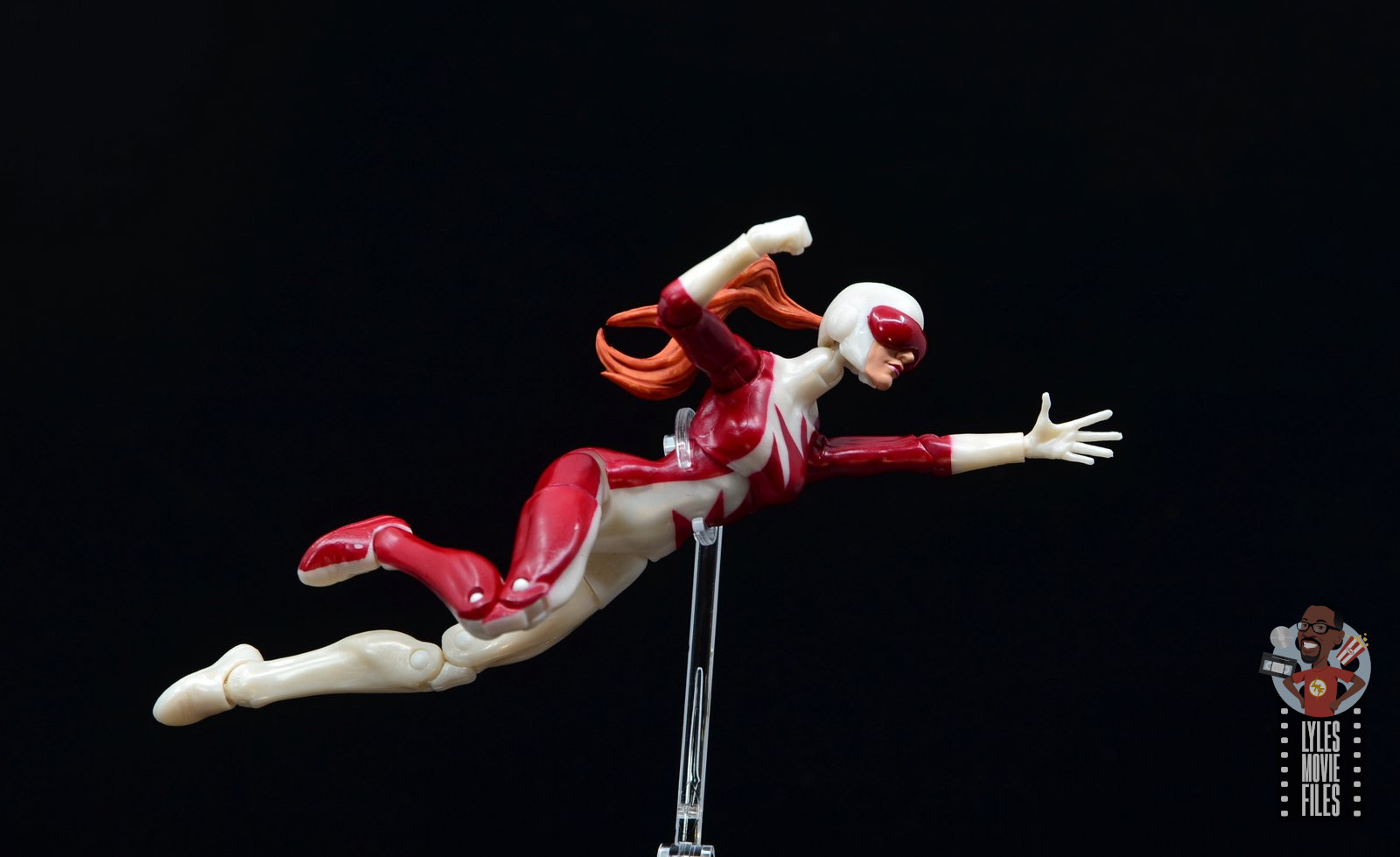 My Aurora was the only figure with a significant issue on this front as her arms were stuck at the elbow. They’ll need some heat whether the hair dryer or a dip in some hot water. Hopefully that will do the trick as it seems to be a widespread problem for folks. 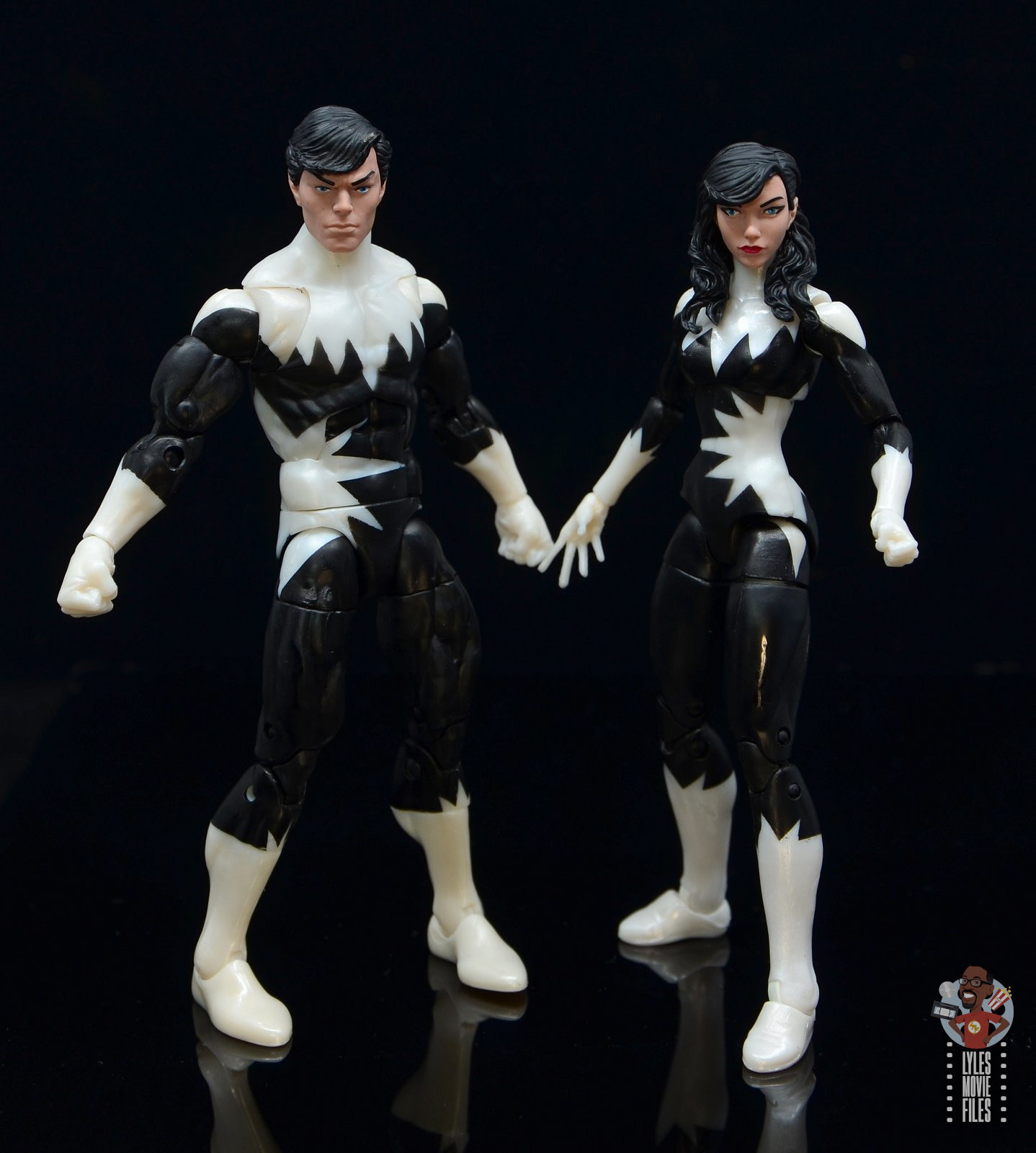 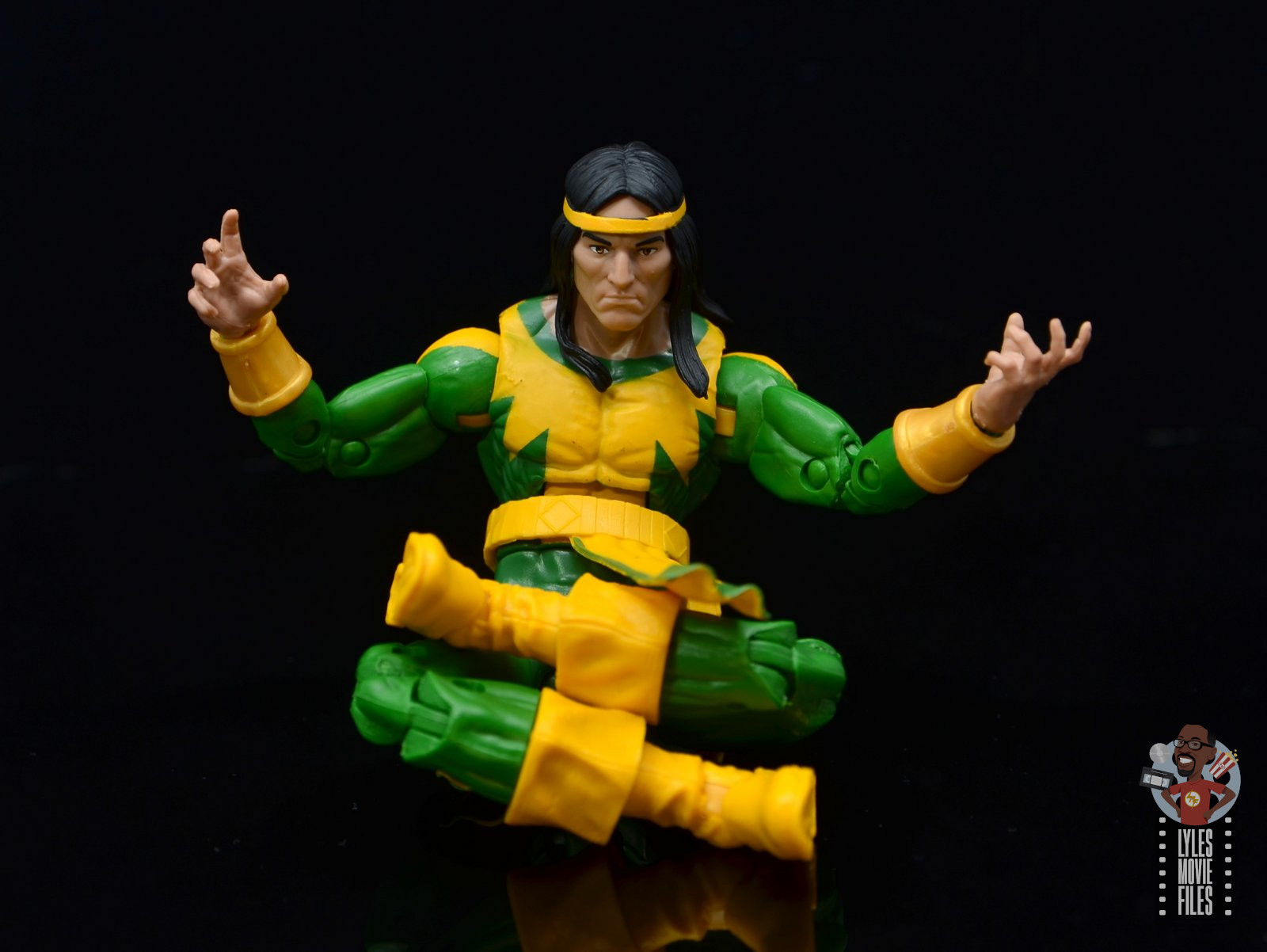 Puck is surprisingly articulated for his size (cough Spider-Ham cough) and he’s got good range with his elbows, biceps and knees. I love being able to get that fist into the open hand pose like he’s about to lay a serious smack down on someone. 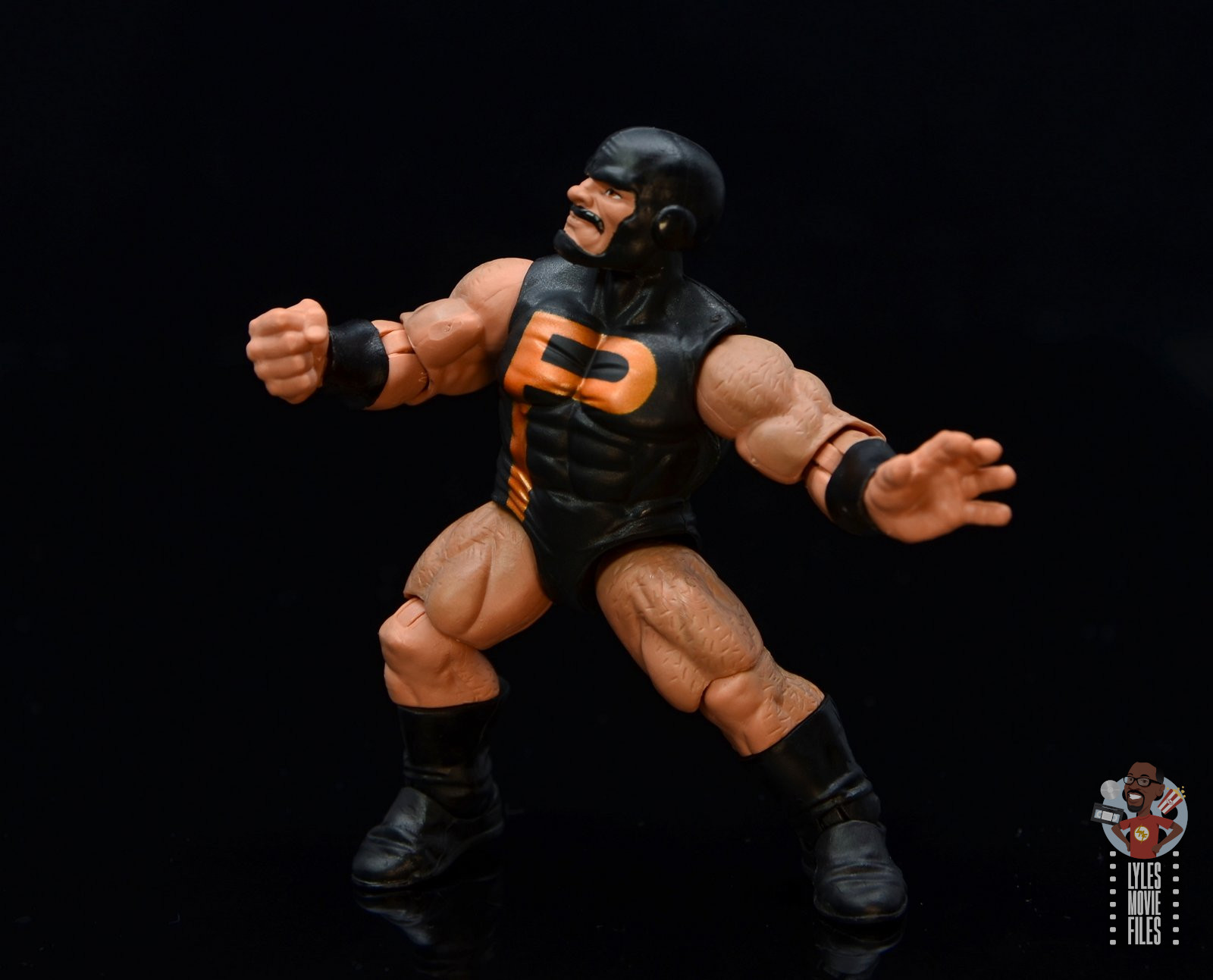 I just wish he had a waist swivel and torso joint as they’re the only missing elements. With some clever positioning, I can work around it though. 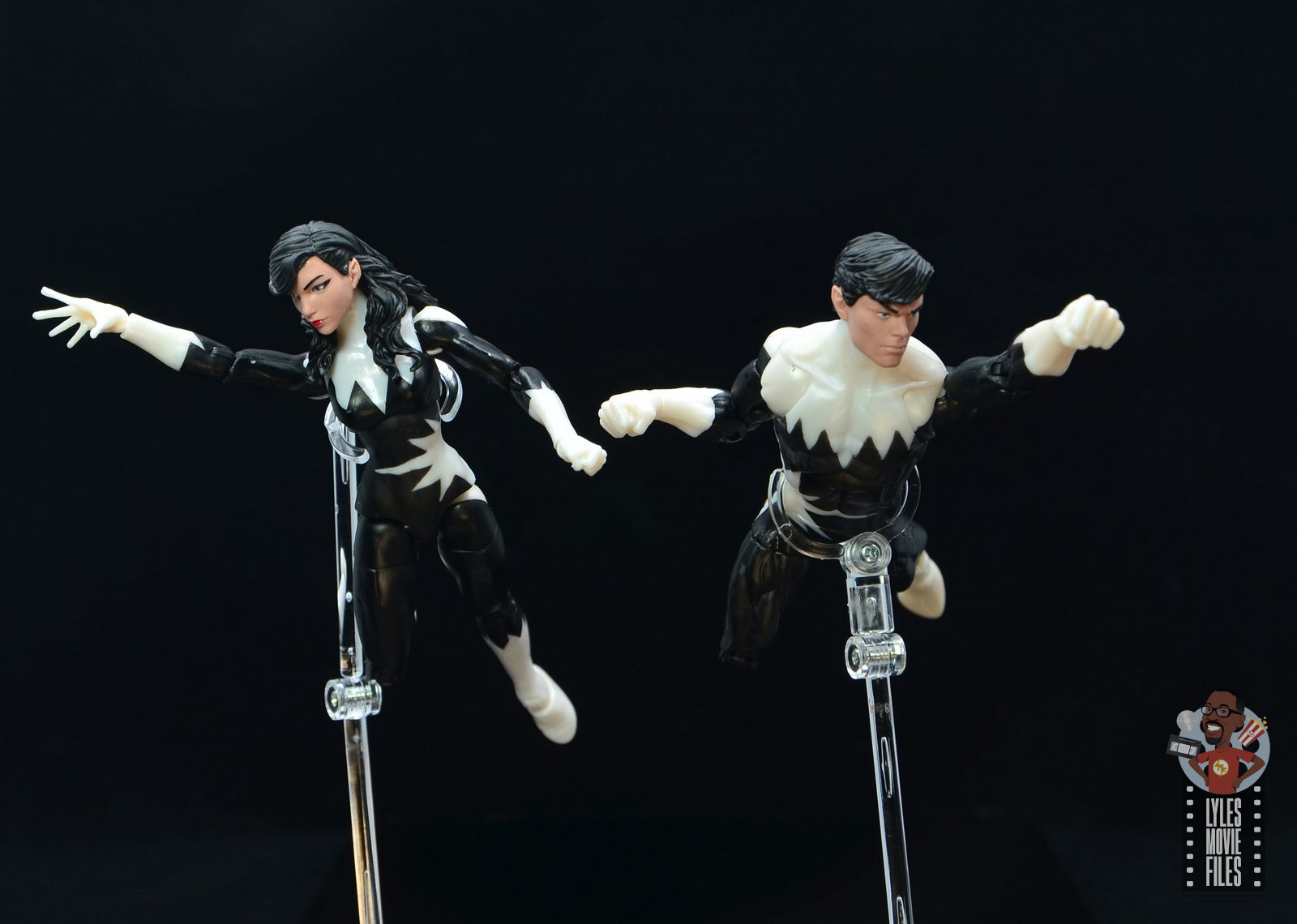 Accessories: There’s a big goose egg for this set on that front. Besides some smaller animal forms for Snowbird, I can’t think of much else I’d want since I have plenty of those energy effects that seem like Hasbro’s go-to in this instance. Maybe some swappable flat hands/fists for Aurora and Northstar, but that’s all I’ve got. 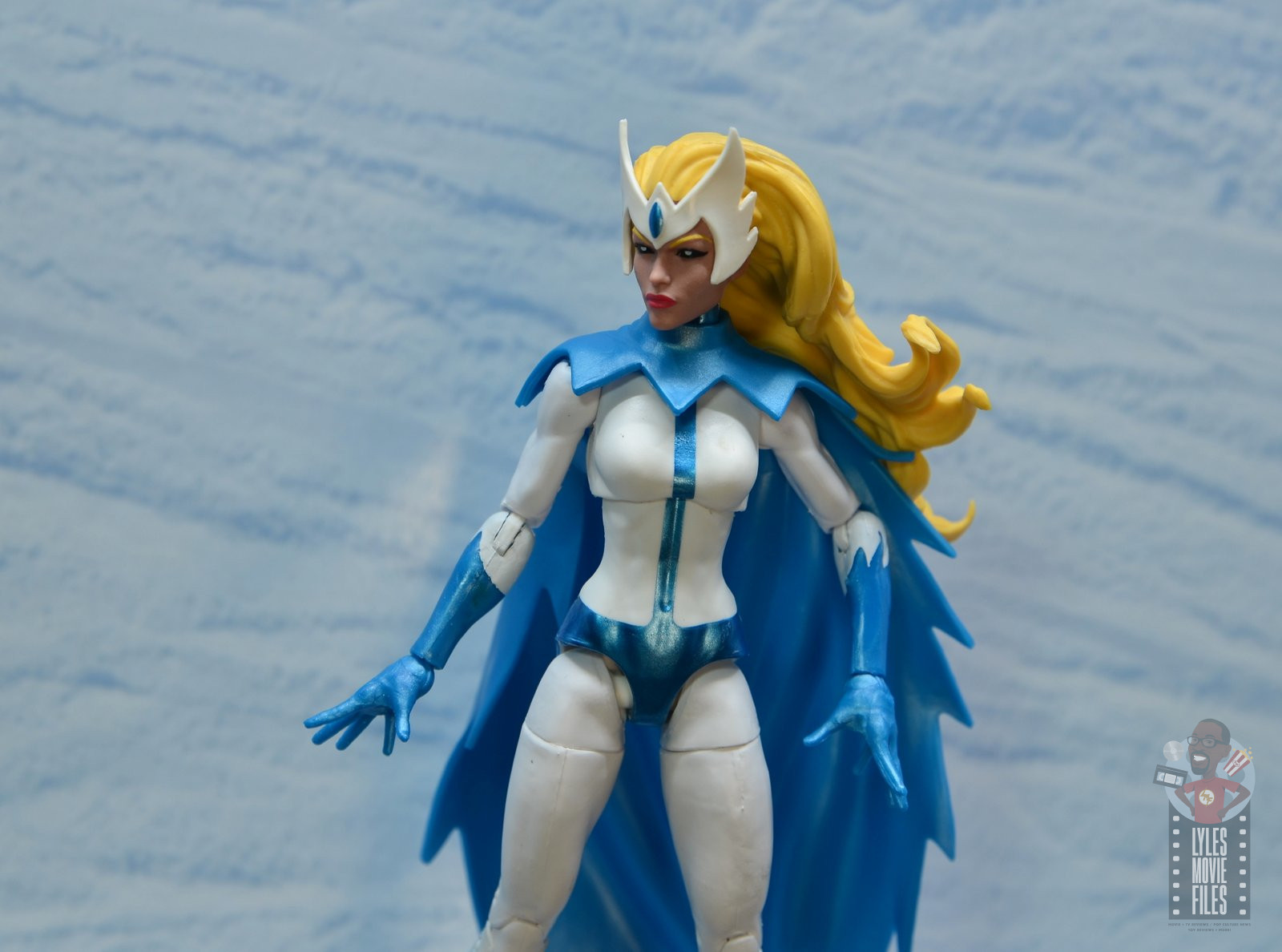 Worth It? With tax the set is $19.33 per figure. That’s clearly not the same value as most Marvel Legends that come with multiple accessories and a Build-A-Figure piece. 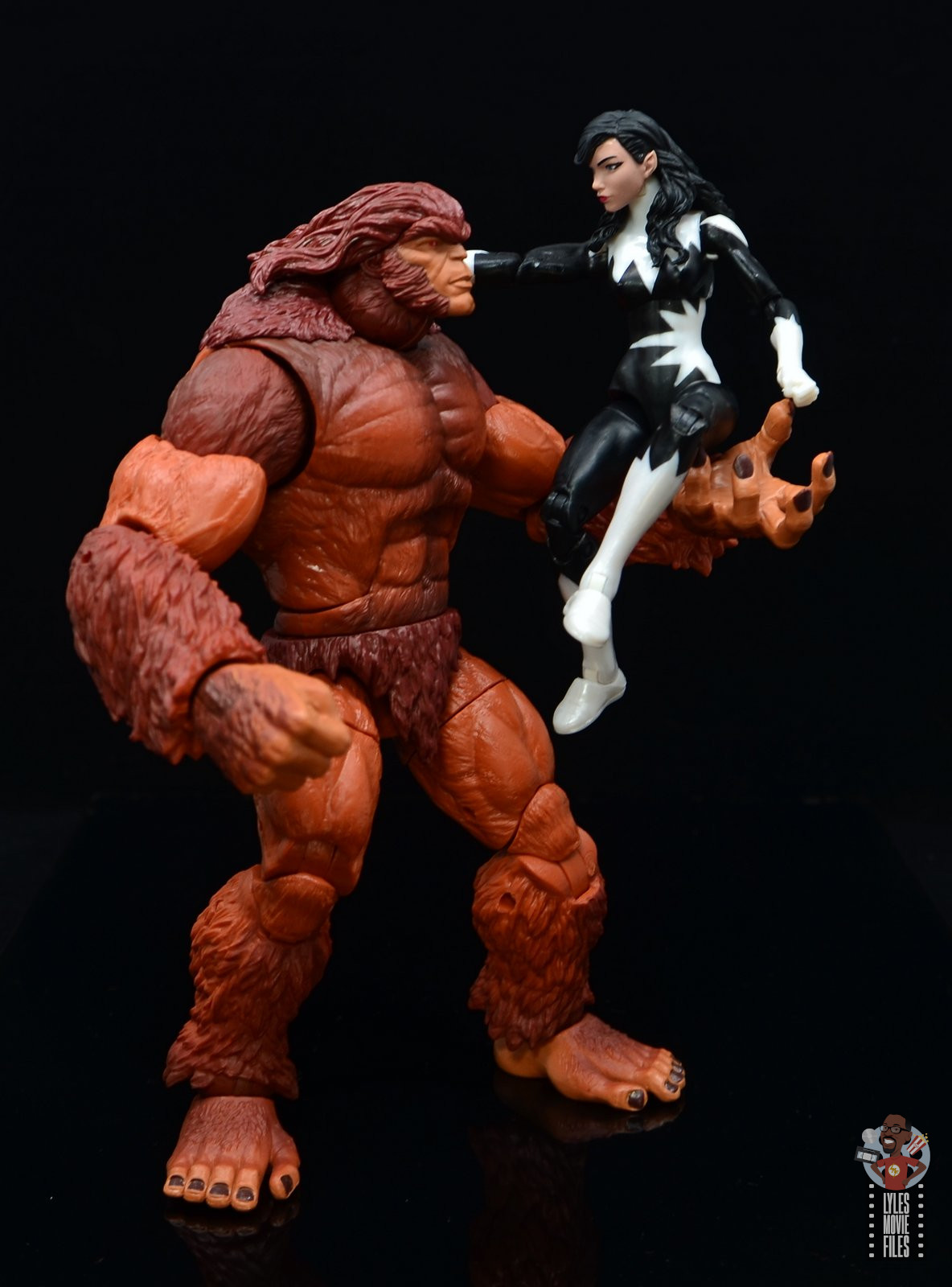 But I think in this case it’s important to consider this set was created for its ability to knock out a team that didn’t require extensive new sculpting or two years to complete. In an era where Rock Python can get a single release no character is really off limits, but I appreciate getting the whole team in one set. 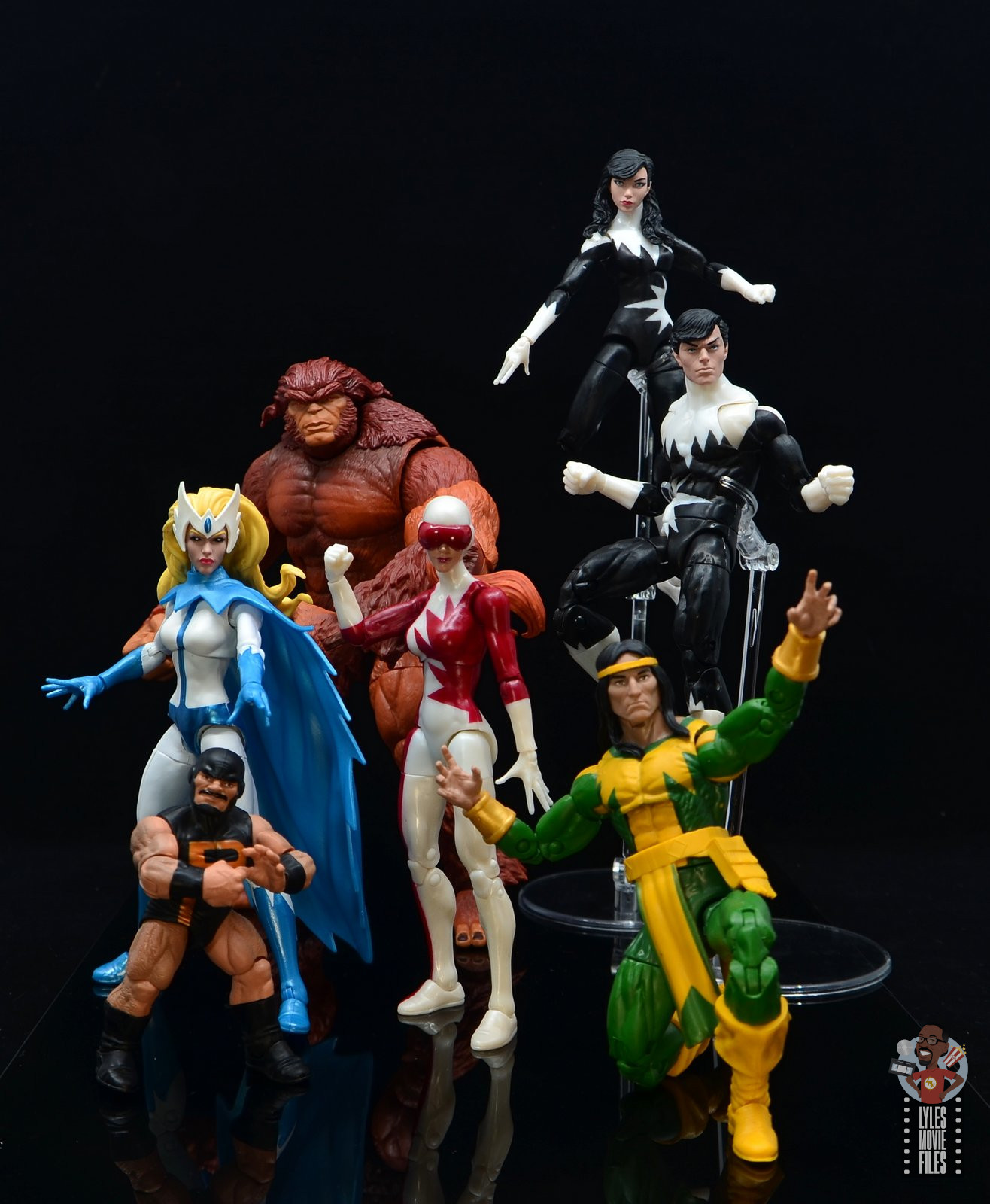 Aurora’s elbows aside, this set was such a tremendous surprise. I’ve gotta find shelf space for them, but it is so cool having another classic team completed in this Golden Age of Marvel Legends.

Where to get it? This set is an Amazon exclusive, so you’ll need to get it from them at this handy link. 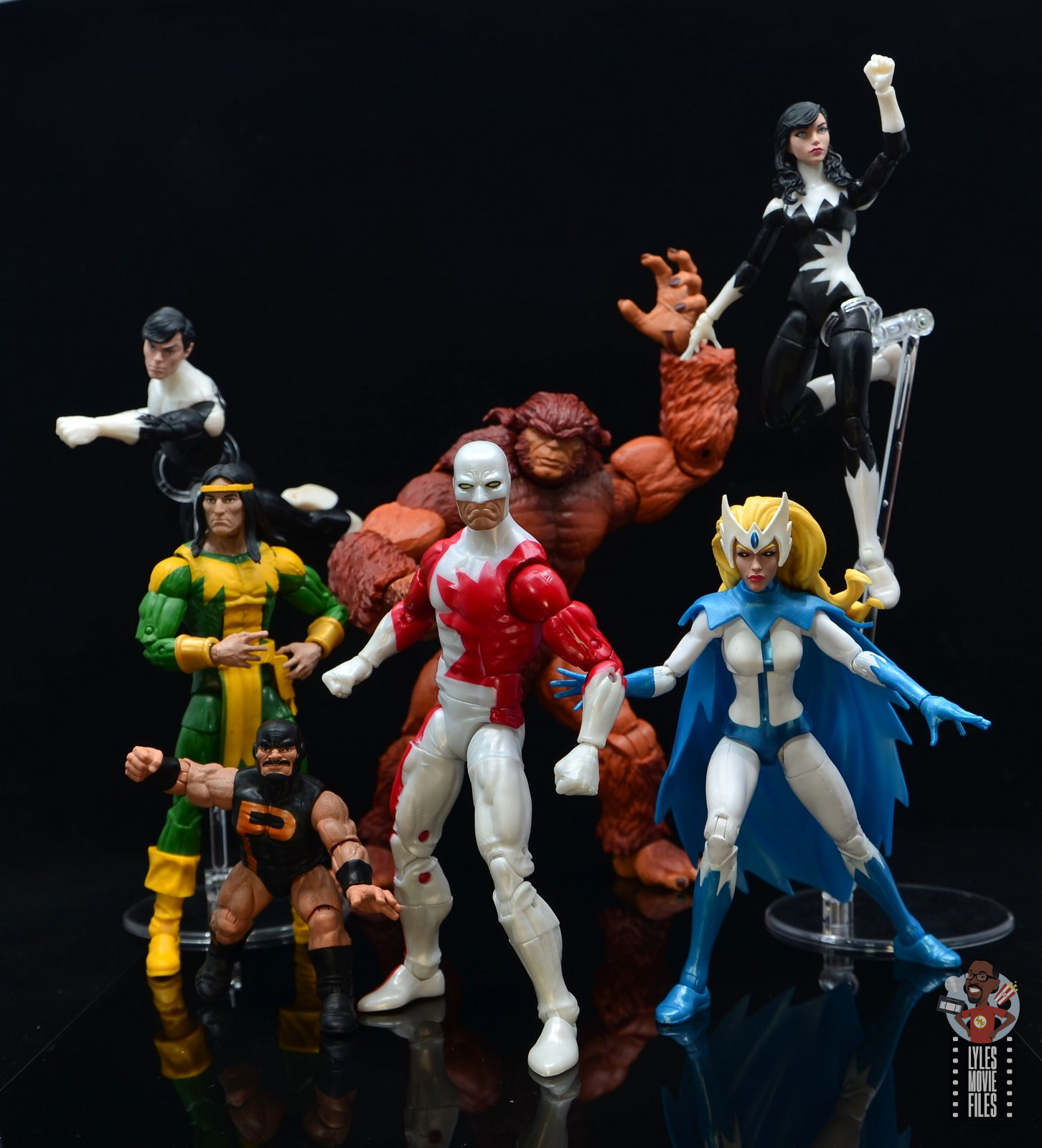 **As an Amazon Associate, I earn from qualifying purchases.