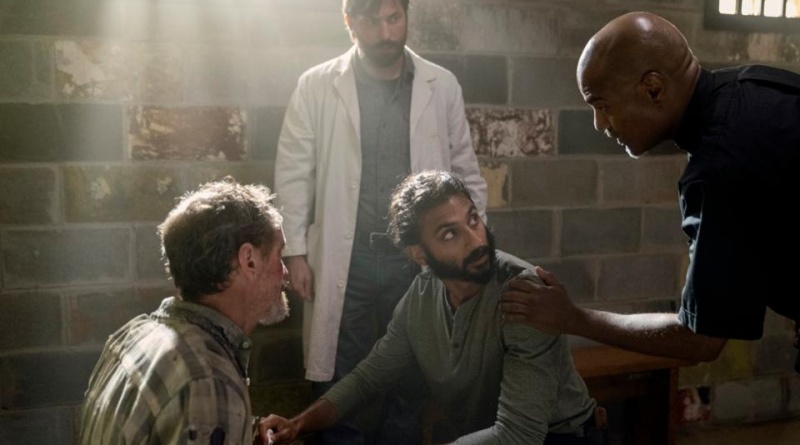 I complained last week that even after last season’s big purging the cast still feels too unwieldy. Open Your Eyes didn’t have another mass murder, but we did lose a pretty significant character this week.

Save on Uncharted 4: Thiefs End now only $4 for GameStop’s Deal of the Day at GameStop.com

The big bug is all over Alexandria and everyone’s catching it while Siddiq and Dante are overwhelmed keeping up with the influx of new sick patients. Like every episode this season, Siddiq is still a mess and having night, day and afternoon terrors of The Whisperers forcing him to open his eyes and watch the beheading of his pals. That would be hard to sleep through, but it’s still become mildly frustrating that’s the entirety of his storyline this season.

Carol’s Whisperer captive remembers Siddiq, which freaks him out further. While Siddiq is easy to rattle, Carol is a different matter entirely. Gabriel threatens to tell Michonne about Carol’s reckless actions while Daryl meekly tells Carol later he wasn’t wrong. Daryl has to be getting pissed about Carol’s less than reliable decision making skills at this point. It seems kinda jacked up that Carol was off living the pirate life while everyone dealt with the real terror of Alpha and The Whisperers returning at any moment. 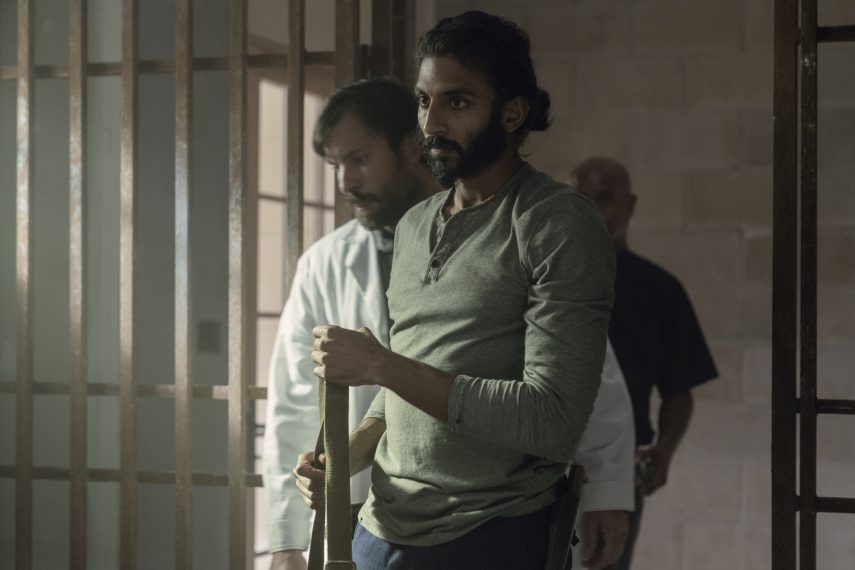 She casually grills Lydia for some insight on how to handle her interrogation. Carol tries the show the brighter side of life in Alexandria, which could spark a message of hope and prosperity away from Alpha approach first. That literally blows up in her face along with some strawberry jam. Try harder Carol. Bye Bye Happy Homemaker Carol. Hello Terminus Carol.

Interrogation Round 2 doesn’t make much headway as the prisoner mysteriously dies and Siddiq thinks he’s to blame. He’s had enough and goes to the lake to drown. Magically Rosita is recovered enough to pull him out and make him spill what’s rattled him for so long. You know what Alexandria really needs? A therapist. Someone who could sit people down and help them process their traumas…

Aaron doesn’t mind playing therapist for Gamma as they’ve been meeting up on the regular. Gamma is looking for tactical weak spots while Aaron is just happy to chat with someone apparently. This doesn’t gibe with his warrior mentality from earlier this season and if he wanted to chat it up with someone Negan was right there. To make sure Gamma doesn’t fall for Aaron’s lies about his daughter, family and community, Alpha laces her arm up with a switch. Clearly Alpha is from the South.

Before he died/got killed, Carol’s captive revealed The Whisperers all think Alpha killed Lydia. Maybe we could talk this out and figure out the best way to use this new advantage? Oh, no Carol’s just gonna take Lydia with her to kick it and “randomly” run into some Whisperers. In this case it actually benefits Aaron, who was getting on the wrong end of Gamma’s knife as she tried to fight against her desires to be in a real community where wearing walker masks is generally frowned upon. Gamma loses it when she sees Lydia. How much of Momma Alpha’s mission statements lies? This shatters Gamma’s world. 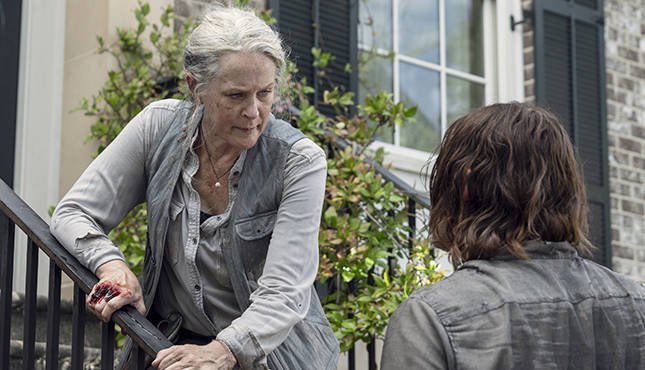 And Lydia’s too since she realized correctly that Carol was just using her in the same manipulative way as Alpha. Carol casually using Lydia might be the one thing to get Daryl to take a side against her for once. Carol and Daryl being on opposite sides could be really interesting.

Siddiq pieces together that the water supply was contaminated resulting in the death flu. Making sure that was straight was Eugene and his responsibility. You know, I’m OK with the PTSD suffering doctor just having one job.

Dante checks in on his buddy and makes the unforced click of his teeth that jobs Siddiq’s memory — he was a Whisperer and not just any, but the one holding him and making him watch the beheadings. All the time in PTSD land dulled his reflexes and poker face giving Dante plenty of time to react and choke Siddiq to death.

It’s a brutal death and poor Siddiq never really managed to turn the corner after last season’s traumatic event. I also appreciated how Siddiq was never a token Muslim and was a fleshed out character first. TWD has never been about checking off minority BINGO, but it was refreshing to see a positive, non-stereotypical Muslim on the show. Hopefully Siddiq won’t be the one example over the next few seasons. On the other hand, Gabriel has one less romantic “rival” so that’s gotta mean something?

You’ve gotta figure the Alexandria Career Center is tired of having to post the job application for a community doctor. Granted Dante can step up, but we might not be able to trust the Whisperer doctor. We probably need to fire the head of the ACC anyway since they did a terrible job of checking Dante’s references and previous work history. I wonder what kind of recommendation Alpha would give him? 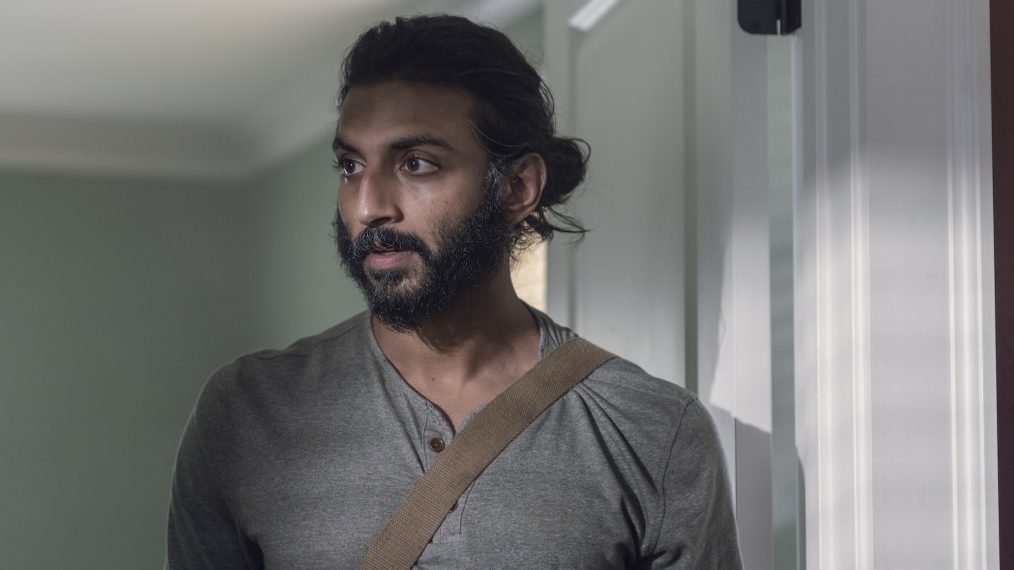 Michael Cudlitz returned to direct this episode and it’s neat seeing “Abraham” still very much a part of The Walking Dead family. I could have done with about 30 less crazy edits, but he nailed the big Dante reveal. It felt like hope getting squeezed out once again just as the communities (minus Carol) were starting to recover from the tragedy of last spring.

Open Your Eyes was exactly the kind of gut punch the season needed as we head to the midseason finale. I feel like we still need another couple of big deaths, but this sets some interesting developments in motion.