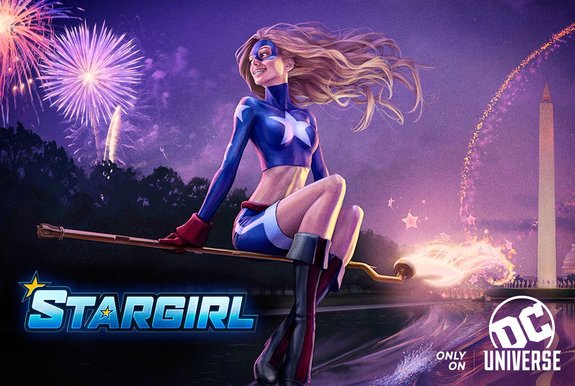 In further proof that there’s going to be some actual synergy between the DC Universe TV shows and the Arrowverse, the new Stargirl won’t make her first appearance on her DC Universe show, but in Crisis on Infinite Earths.

This is pretty big news as it opens up the possibilities of greater crossovers not “just” limited to the Arrowverse, but other DC shows as well. There’s a rumor that the Titans cast might show up during Crisis as well. The great divide between DC properties has always been a weird sticking point to me as it seemed like an unnecessary barrier to a cohesive universe.

Marvel didn’t do the best job of it. Agents of SHIELD did have some interaction with the greater Marvel Cinematic Universe, but the Netflix shows could only manage some casual references to events from the MCU.

If DC Universe and the Arrowverse partnership is a long-term deal, that’s only going to benefit comic fans. We know Stargirl episodes will air on The CW the day after their DC Universe debut so this could be the start of something really special.

It makes you wonder how much of the old guard of the Arrowverse is really necessary in that light. The Flash is The CW’s highest rated show followed by Batwoman and Arrow, which we already know is ending. Supergirl and Black Lightning are within the Top rated 83 shows, but they’re not exactly tearing it up.

Maybe those characters could get put into new series on either DCU or The CW? An Outsiders series could be a viable spot for Black Lightning while keeping his supporting cast and being a CW-complement with natural crossover appeal with Titans for example. Supergirl likewise could easily transition to a Legion of Super Heroes show.

For now we’ll just have to wait for Crisis to see who else might pop up. Arrowverse showrunner/co-creator Marc Guggenheim teased there’s still some reveals to be made.

Several more still yet to be revealed. https://t.co/tguKYoTkQz