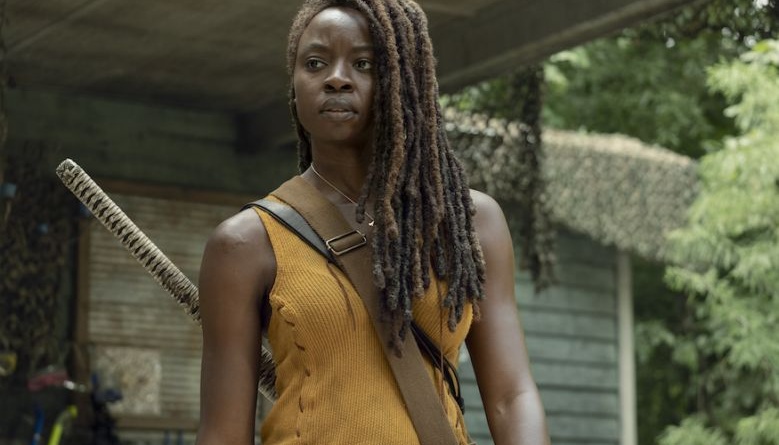 Last week’s shocking death wracked Alexandria as they deal with the traitor in their midst. This was the kind of decision that would come back to bite our crew on years past and that definitely wasn’t gonna happen here.

We start off with an extended flashback exploring Dante’s treachery and how he carried out Alpha’s plan to infiltrate, sew dissension and gradually create chaos over the last four months.

In seasons past Dante would have been a frustrating subplot as the audience clearly knew he was a snake and Whisperer traitor but the main crew wouldn’t find out until near the season finale.

That’s not the case this season as Rosita instantly finds out he’s a traitor as she’s forced to kill Walker Siddiq. That was a tough one. While walker Siddiq killing Dante would have been poetic justice it actually worked for an interrogation scene.

Dante was hoping this would send everyone into disarray like the very tense situation with Negan after he killed someone to help Lydia. He won’t get to see his handiwork though. Rosita is the woman in black looking for a fight with random walkers outside the gates. She gets overpowered and Eugene has to save her because Eugene is always watching her. Hopefully that teaser for the second half of the season of them kissing is a Eugene daydream because Rosita is more than just a love interest for all these dudes.

It did seem like Gabriel and Rosita were growing apart right up until Gabriel confronted Dante and viciously killed him. I’m OK with that as the communities have played the merciful sucker card too often. Sometimes you just have to knife a dude who killed two of your people, poisoned a rack of them and helped stick heads on pikes. 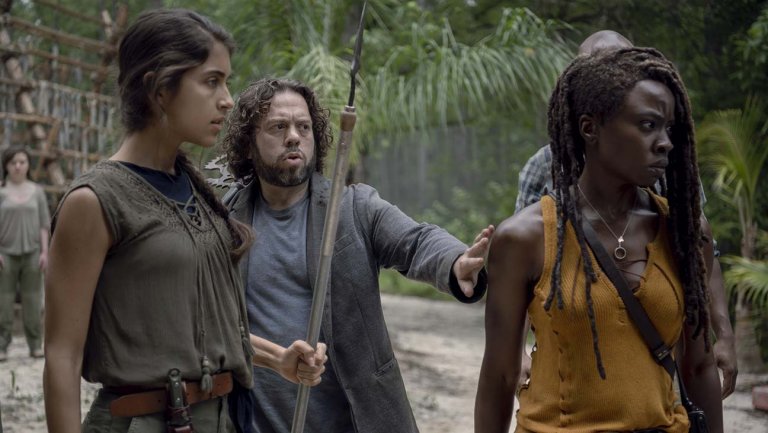 Michonne, Luke, Judith and Scott make a field trip at library because characters haven’t done anything particularly risky in a few weeks. Luke has no regard for library etiquette so a pair of helpful walkers offer to keep him quiet for good. Luckily for Luke, a random guy saves him and then manages to get caught by the ladies of Oceanside. That’s a heck of a name for a destination resort BTW. The guy has been stealing supplies and trying to make off with a boat and in the wake of Siddiq’s death naturally the main suspicion is he’s a Whisperer.

Clearly, since the crew hasn’t encountered crazy people who weren’t Whisperers before. And this guy looks like he’s at least tossed some water on in a general effort to be clean in the last six months. After a few conversations, Michonne decides to give Virgil (Kevin Carroll) a chance and learns his family is at a naval base with weapons she could use to win the war against The Whisperers.

This seems like a solid route to write Dania Gurira off the show for a while in a very loose adaptation of The Walking Dead: Michonne video game. That would be a cool spin-off/movie option, but it looks like at least some of this story will be continued in the back half of the season.

In what’s shaping up to be a mirror of the Dante storyline, Alexandria might have a double agent working with The Whisperers now as Gamma is reconsidering her role. She wants to see her niece, who Connie saved and brought into the community. And in a sign of good faith, she tells Aaron the location of Alpha’s herd and reveals that her real name is Mary. 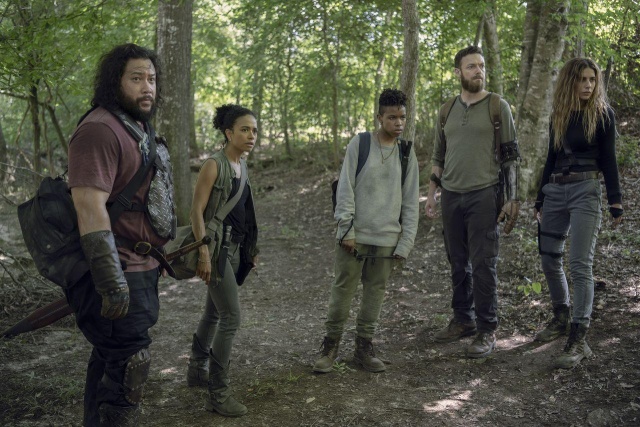 Daryl, Carol, Connie, Jerry, Kelly, Magna and Aaron go after Alpha’s horde, but they’re not where Mary said they’d be stationed. Carol spots Alpha in a clearing and with complete disregard for the obvious trap, runs off after her. Daryl sends the others after her and they all tumble into this cavern. Oh look! There’s Alpha’s herd! Thanks Carol.

The World Before didn’t have that shocking gut punch cliffhanger of last year’s mid-season mark, but it did set up some potentially enticing subplots. The quest to escape the tunnel/cavern; Gabriel going down the dark path; Mary turning on The Whisperers; Negan’s alliance with The Whisperers and maybe Alden and Luke teaming up for another duet? No, I haven’t forgotten. We won’t get a new episode until February so there’s plenty of time to get your theories and song requests in.