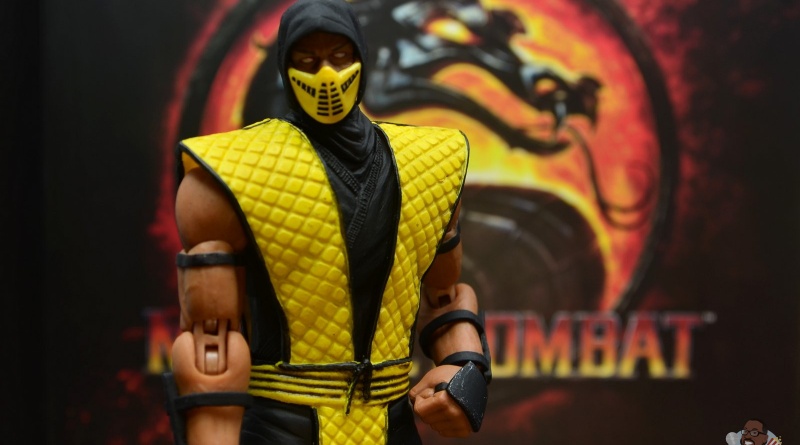 Scorpion is arguably the most iconic Mortal Kombat character thanks to his “get over here” catchphrase. That and the whole burning his opponents with his skull head. Yellow isn’t traditionally an attire used for a stone cold killer, but it works for Scorpion. My Storm Collectibles pile to review has gotten out of hand so it’s time to get one of the heavy hitters knocked out. Let’s see if Scorpion lights my fire.

Packaging:  I like the Mortal Kombat package set up with the dramatic embossed portrait of the character, the slightly faded graphics, wide logo and the elaborate bio. I’m also a fan of the various pictures of the figure on the back showcasing the accessories. 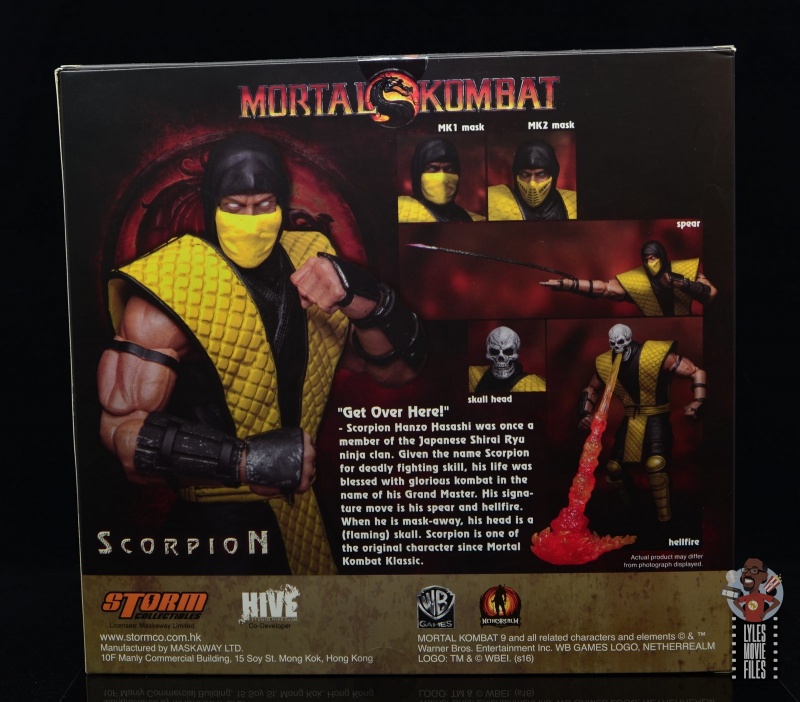 It’s weird how so many figure packaging shies away from pictures of the figure itself. Not so much with Storm Collectibles, which is why they look so cool.

Likeness:  If you have Sub-Zero, there’s nothing different with Scorpion’s sculpt. 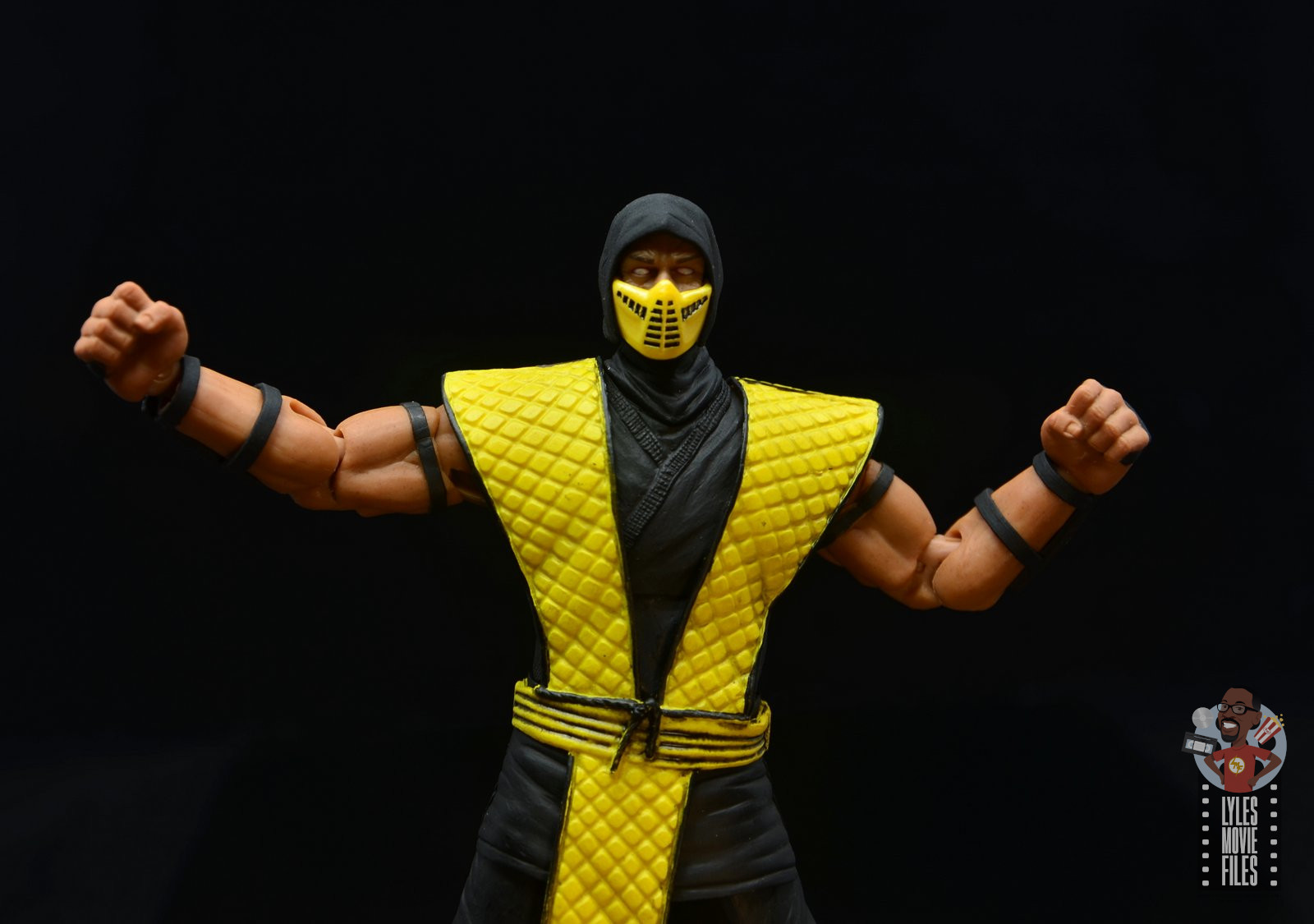 The gi has some terrific sculpting, ridges, folds and layers. I like the gauntlets and shin guards, which have a terrific amount of detail.

Scorpion has two masks with a Mortal Kombat 1 and 2 versions. For Scorpion, I like the MK1 version more than the intricate MK2 one as he seems like a dude who would prefer the simpler look. 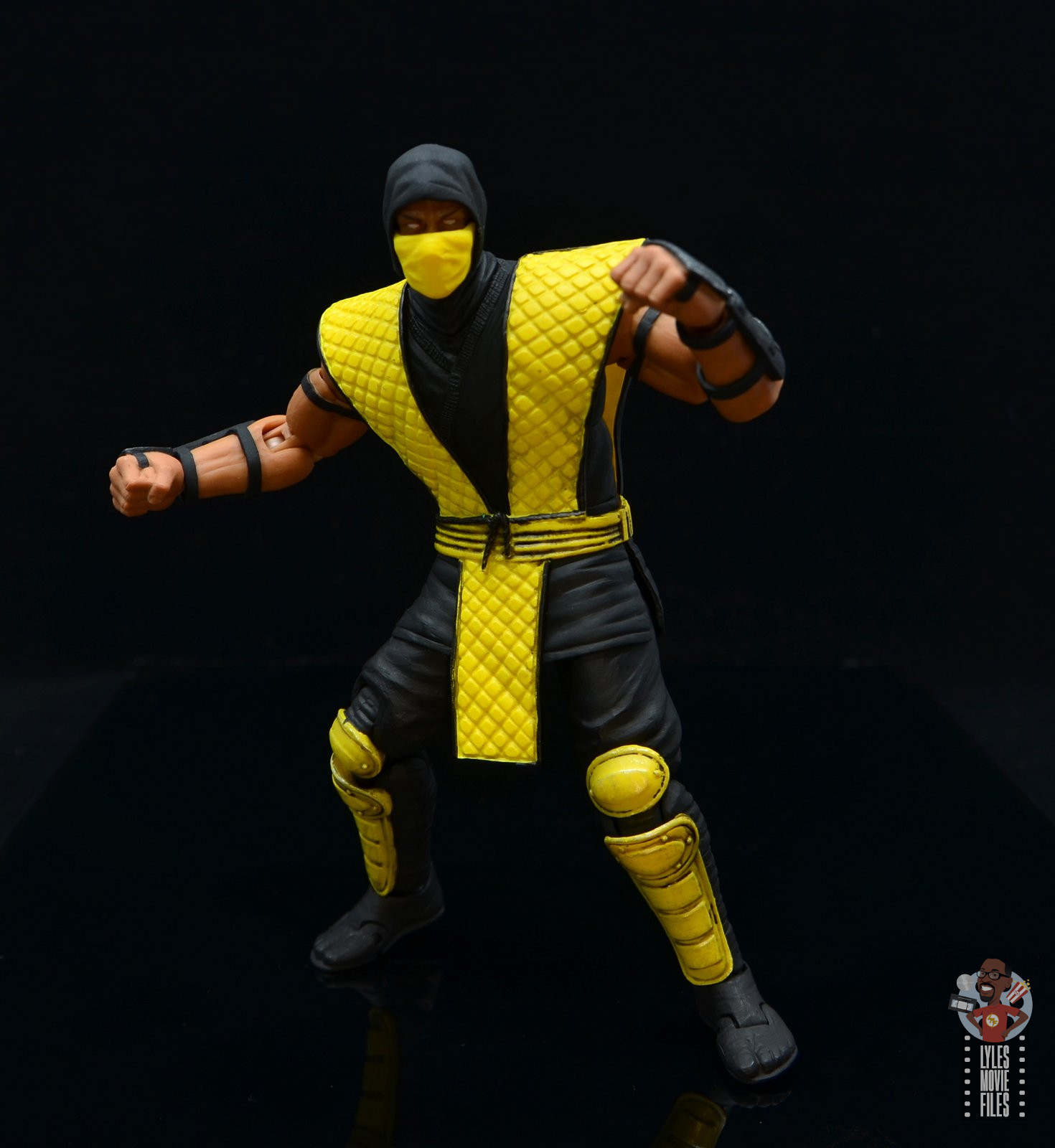 Scale:  The ninjas are slighter than some of the other Storm Collectibles figures. I wouldn’t mind them being a tad bulkier, but this won’t really be an issue until we have some regular MK humans to stack them up against.

Paint:  The paint work on Scorpion is largely solid. The gi gets a little sloppy around the belt area with the black lining all over. The shin guards have a well-worn, somewhat faded appearance.

It looks terrific as does the gauntlets, which feature a lot of scrapes and chips like they were used to guard against attacks. Overall, the paintwork is solid.

Articulation:  No changes from my thoughts on the Storm Collectibles articulation model, which is so fluid and well done for figures of this size and scale.  You can hit all of his trademark moves and thanks to the softness of the gi, there’s no restrictions to the movement. 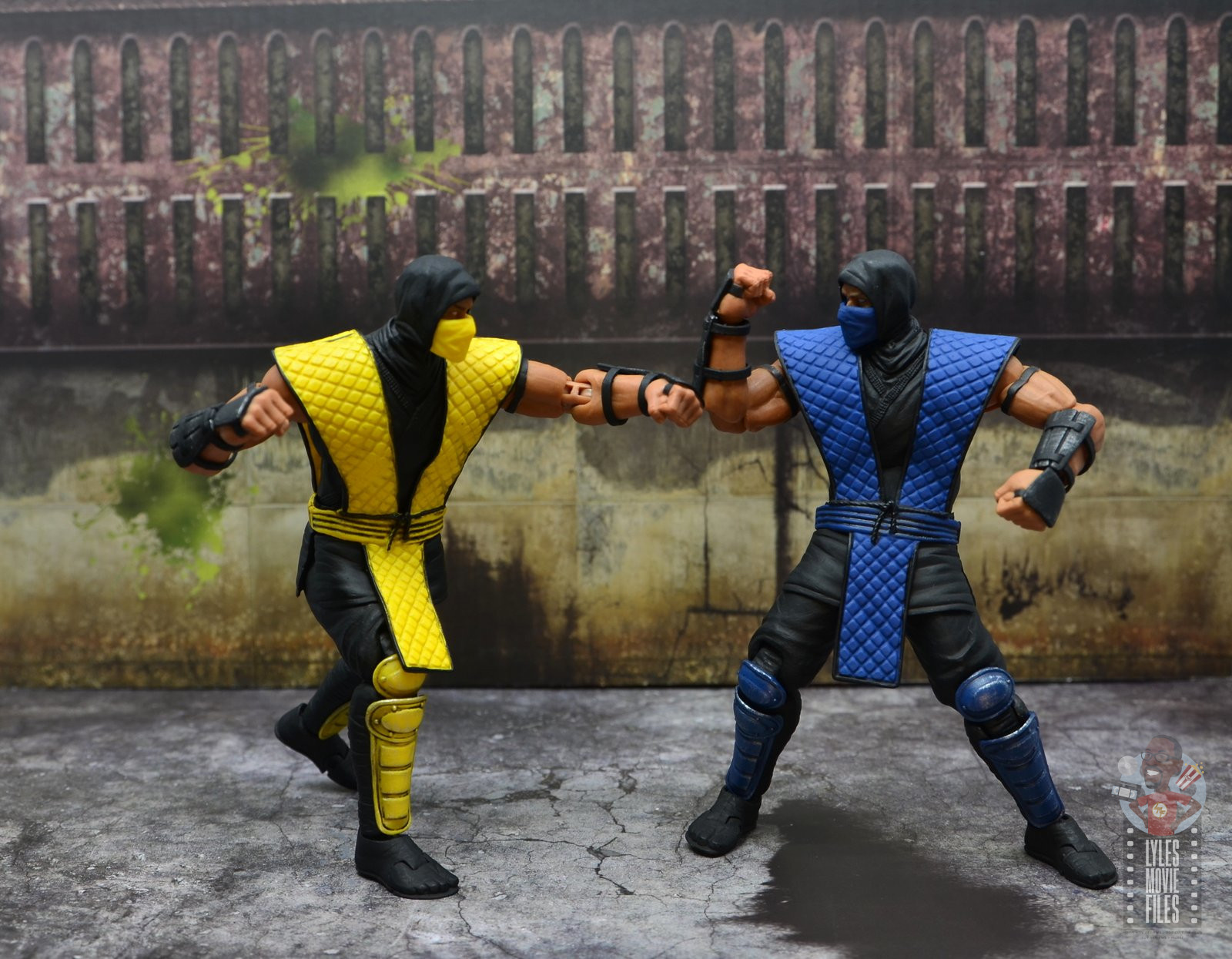 It’s cool having a fighting game figure with no limitations on simulating the moves. Storm Collectibles also does a nice job of incorporating the accessories so you can have a fairly accurate “game session” with the figures. With these figures the articulation and accessories come together very smoothly.

Accessories:  Scorpion has some fun accessories. The hands are the same we’ve gotten with Sub-Zero:  flat palms, grasping hands and open hands. He also gets the unique accessories. 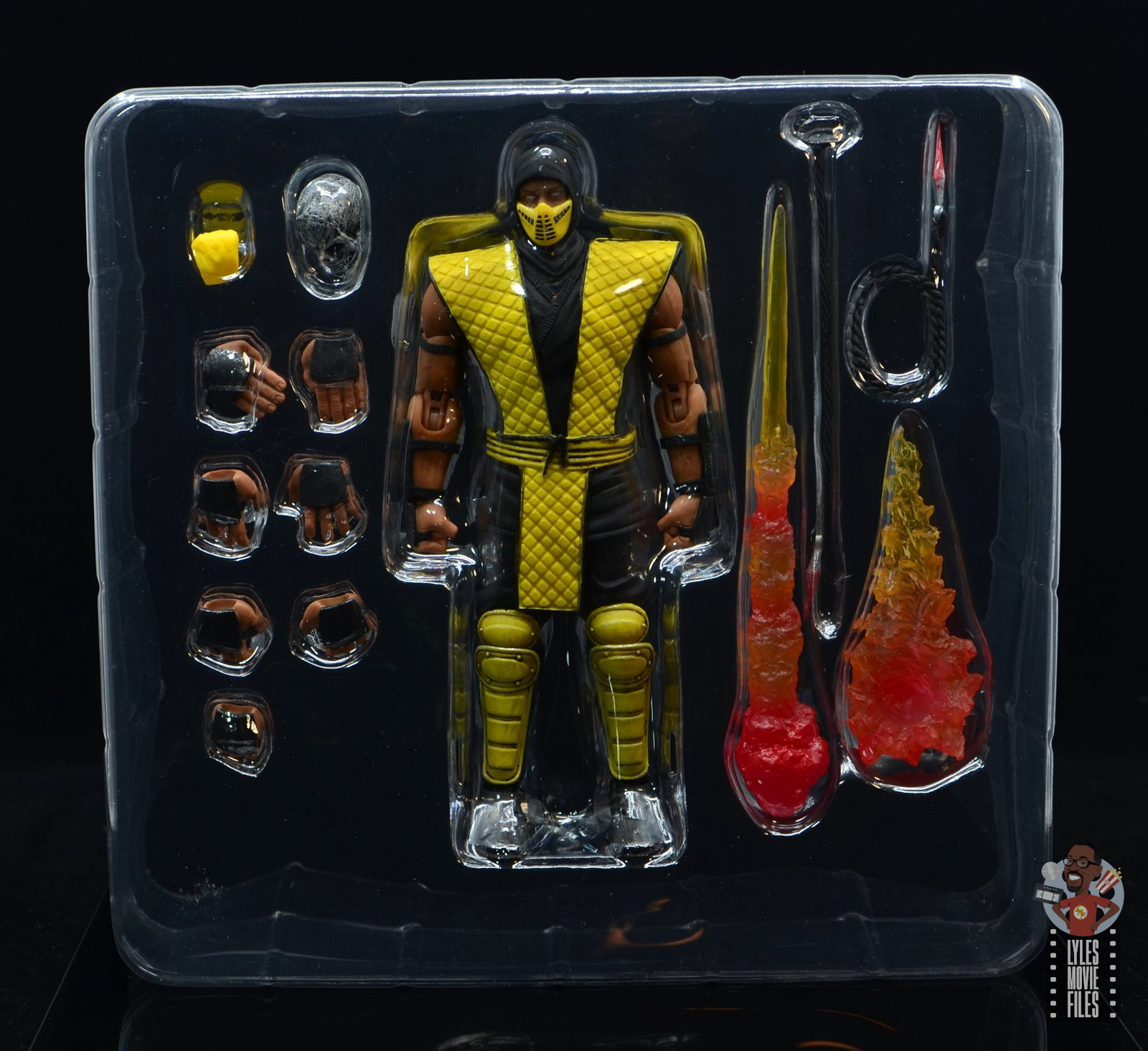 First up is a coiled version of spear so we can do the “get over here!” taunt. 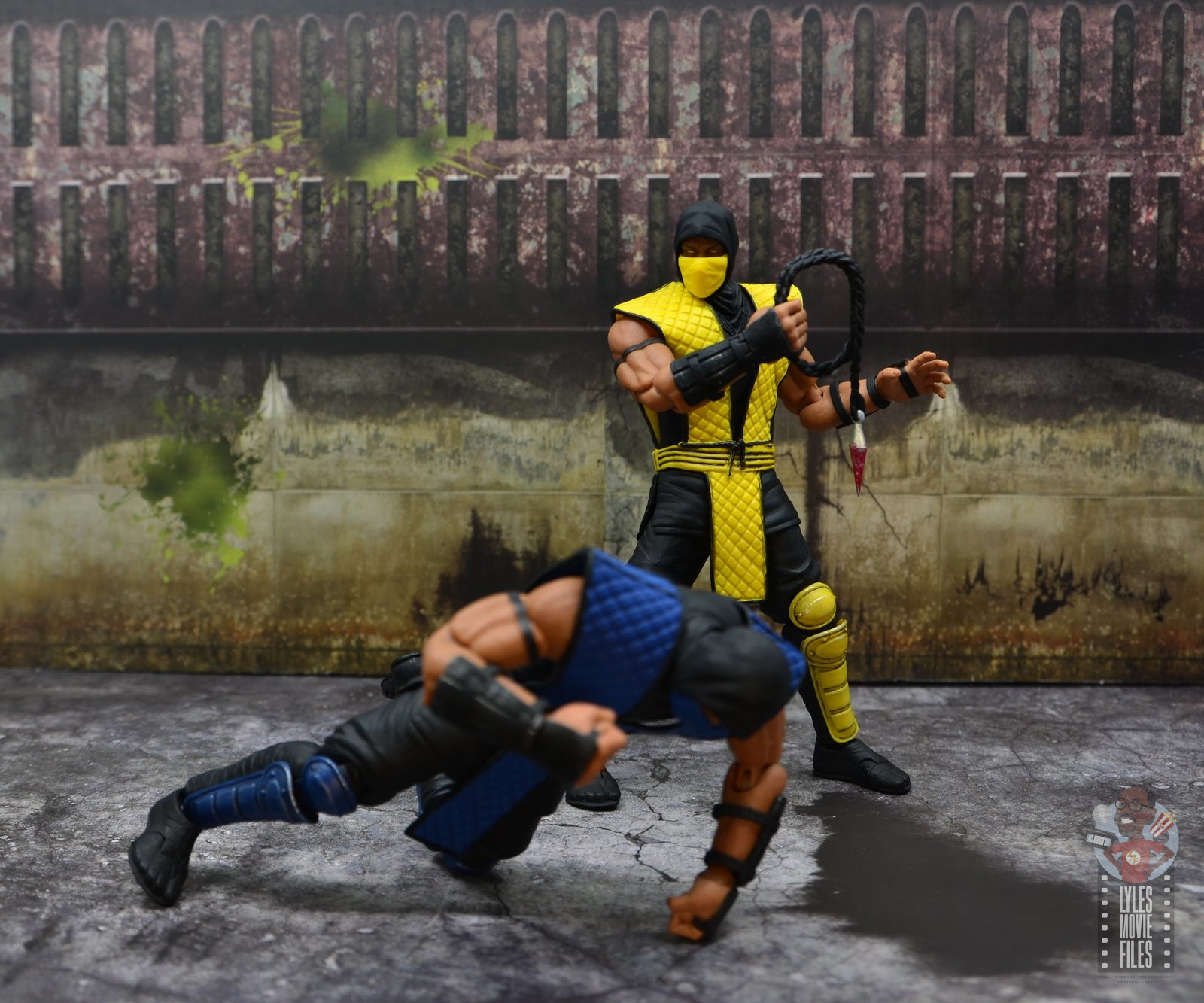 The extended spear fits snugly around the wrist. 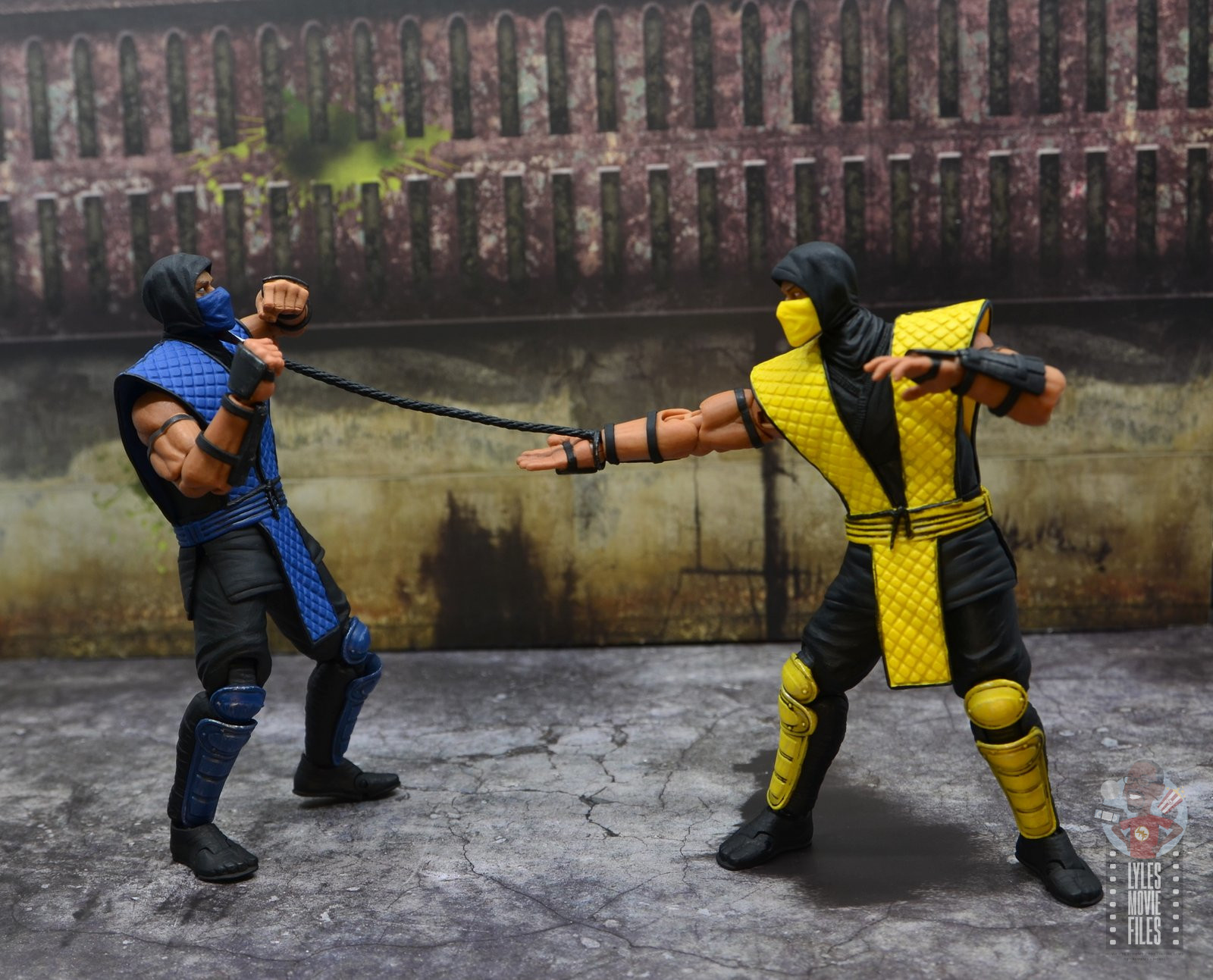 My favorite accessory is the skull head, which has a lot of cracks and detail. The paint wash is nicely done as well that looks appropriately grimy. And as an added bonus, it’s articulated as well.

There’s also trails of hellfire that connect to the skull head. 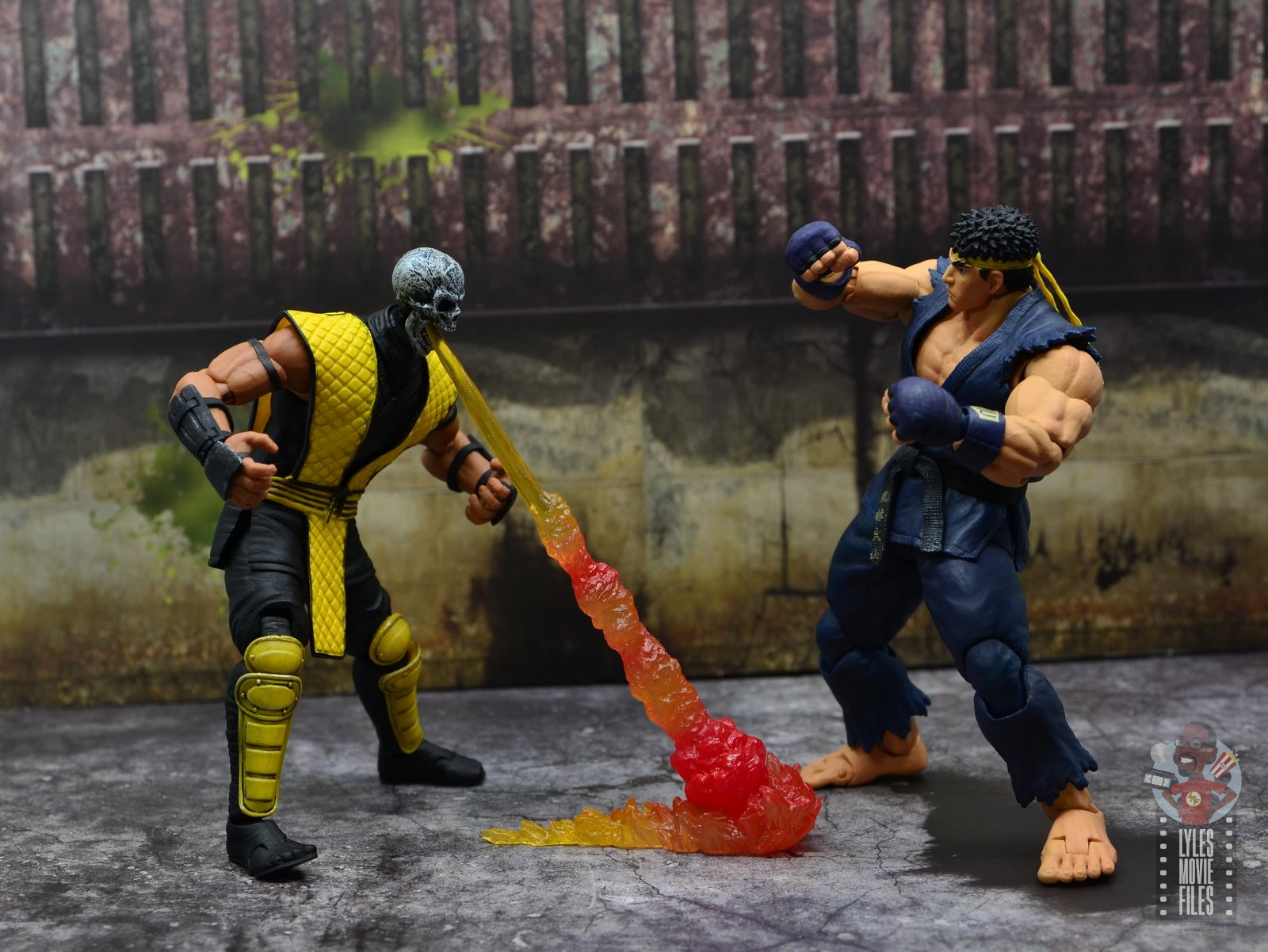 Worth It?  Storm Collectibles helped out collectors by releasing an updated Mortal Kombat 3 Scorpion, which has slashed some of the demand for this release. It’s still pretty expensive, but now it’s far more reasonable. At the original $70 price I paid, this was a solid deal for a figure of this quality with so many accessories. 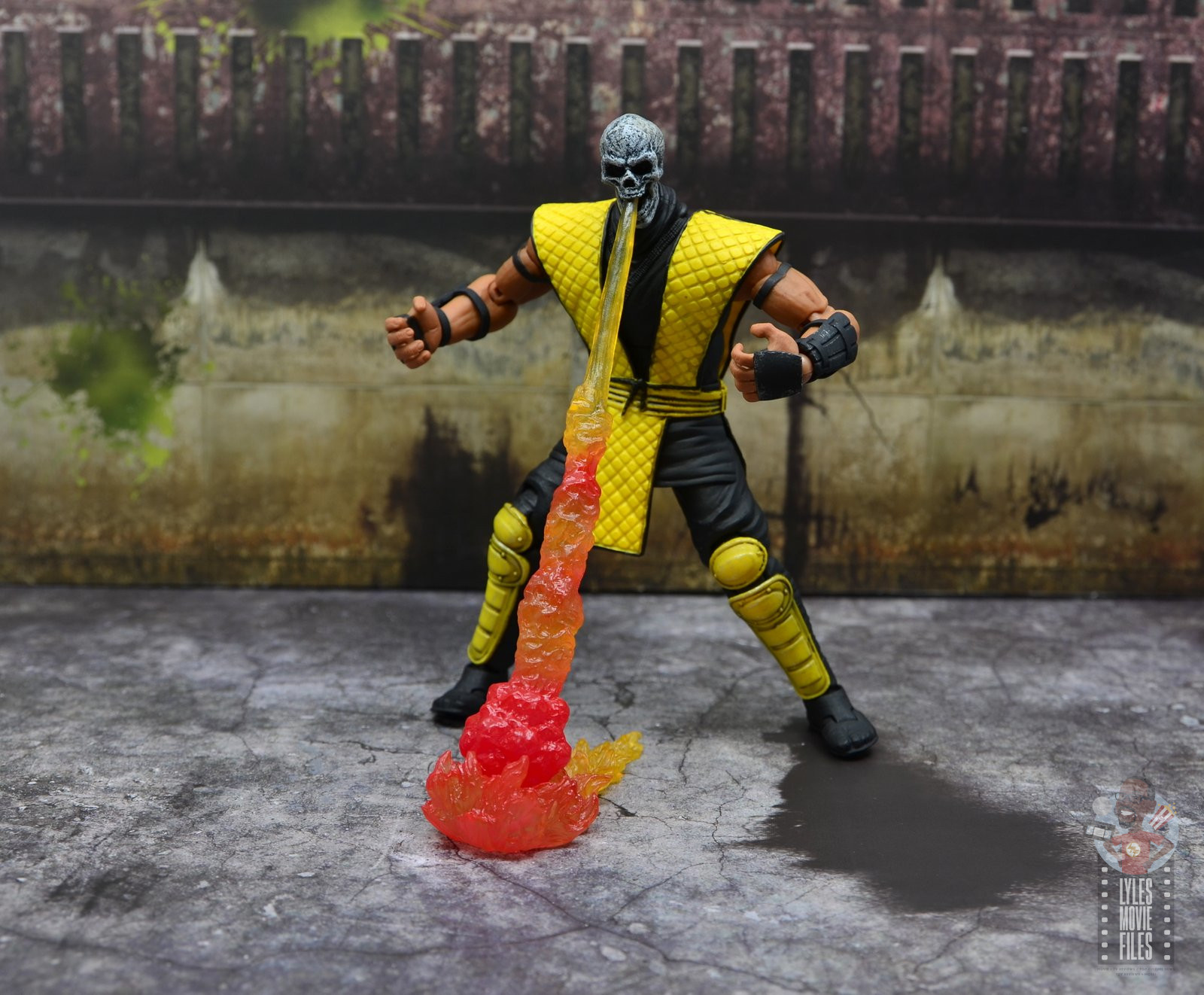 Scorpion is a very well done figure. I’d like him to be taller and wider to fit in better with the other Storm Collectibles lines and tighter paint job, but this is another strong MK offering. 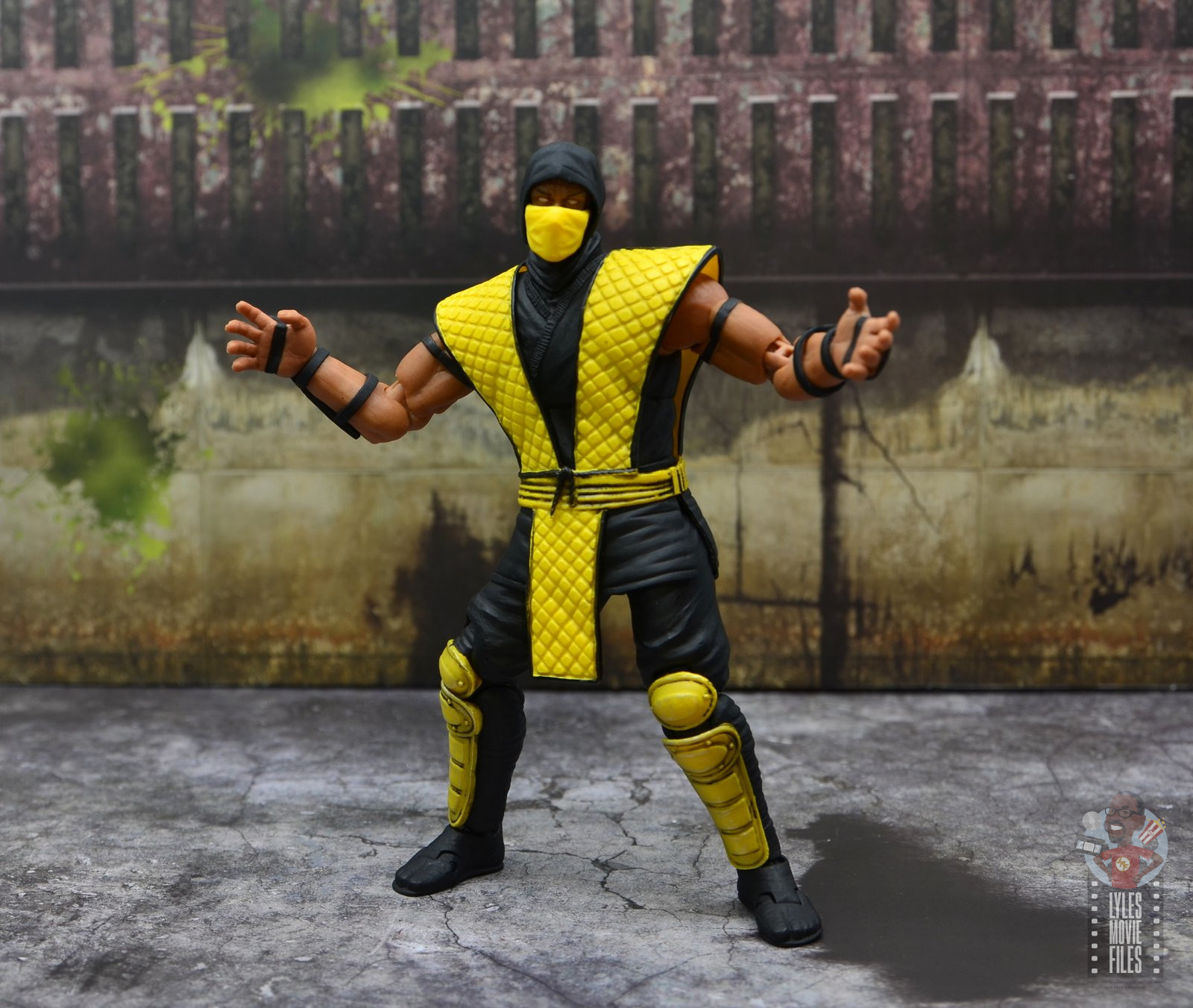 Where to Get It:  eBay is your only option at this point, but you can get the Mortal Kombat 3 figure for under $70 right now at Entertainment Earth.com.