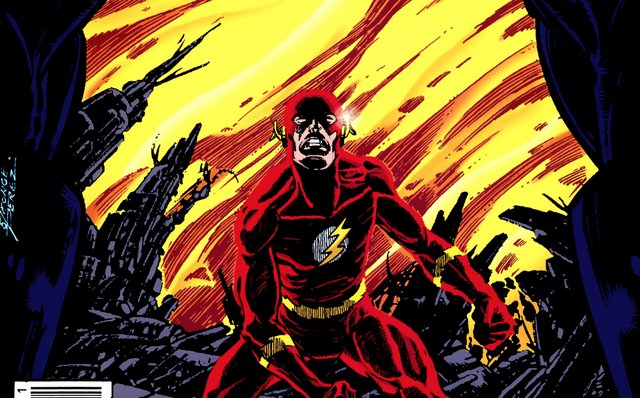 After last issue’s emotional issue, writer Marv Wolfman tells readers to hold his beer if they think he’s done going for their emotional jugulars. If Supergirl’s death in issue 7 was a gut punch, the casualty in this one marks the official closing of DC’s Silver Age era.

With so many characters there’s never enough time to dwell on any one character or team, but it was nice to see a page devoted to the Legion of Super Heroes still coping with Supergirl’s death. She was an important member of the team and it was a smart touch to see them in mourning as Braniac-5 tries to focus on his work and not processing his emotions. 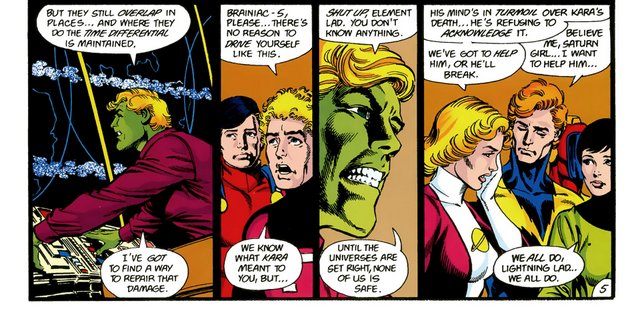 Wolfman and Perez account for one of the biggest DC players by catching up with Darkseid as his attention shifts to the Anti-Monitor. While the Anti-Monitor is all about anti-life, it’s not under Darkseid’s terms, which explains why they would be at odds.

The phased state of flux with the five remaining Earths had left the Guardians in a state of limbo. Now that it’s been stabilized, the Green Lantern Corps are back in the game. For this issue’s significance, that means John Stewart returns to action after missing the initial showdown with the Anti-Monitor.

It’s all hands on deck as the Justice League is frantically trying to restore Red Tornado after being used as a weapon of mass destruction by the Anti-Monitor. Firestorm, Firehawk, Martian Manhunter, Atom, Cyborg, Vixen, John Stewart and even Blue Devil are called in to the Justice League satellite to assist T.O. Morrow.

Crisis has been such a refreshing re-read as Wolfman and Perez don’t just center everything around Superman, Batman and Wonder Woman. Those three are the iconic trinity, but this sequence shows the depth of potential A-listers DC has if they were presented that way. This crew has the foundation for an amazing Justice League squad and it made me think DC might have suffered over the last few decades by putting all the emphasis on their Big 3 minus that brief period where Geoff Johns put Green Lantern (and The Flash) in that mix.

Things go…poorly as Morrow can’t figure out what happened to his creation. If that didn’t seem final enough, a bomb triggers and essentially takes Red Tornado off the board for good. He doesn’t get the fanfare as Supergirl and others, but poor Red Tornado really got trashed in this series.

Fresh off of his massive beat down and near-death encounter with Supergirl, the Anti-Monitor has a new look, which would become his default iconic and enduring costume. Perez gave Anti-Monitor a more formidable design capable of withstanding immense damage as opposed to the more menacing and ceremonial debut attire. Perez wisely kept the signature element of The Anti-Monitor with those deep set eyes and cavernous teeth in this new design. 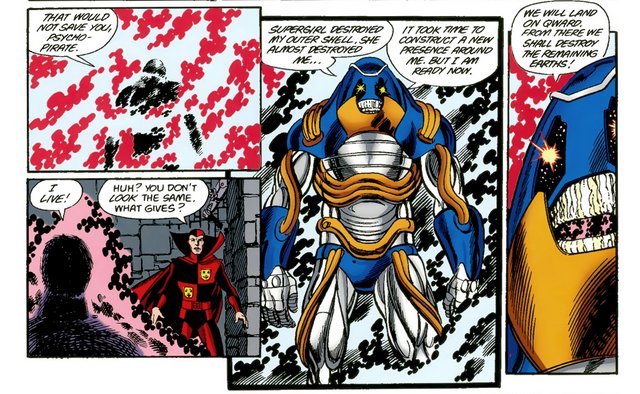 That doesn’t scare The Flash, who realizes it’s up to him to stop the Anti-Monitor from unleashing his anti-matter cannon on the five remaining Earths. The Anti-Monitor is one of the best prepared villains ever as he’s got a plan A, B, C, etc. to destroy the Multiverse. He had one machine to draw the Earths together and now he’s just going to do target practice on the others.

As much as Supergirl’s fight against the Anti-Monitor was about strength vs. strength, The Flash attacks from a much more strategic perspective. Forcing Psycho Pirate to turn the Qward soldiers against the Anti-Monitor was a shrewd plan of attack. Wolfman had been foreshadowing The Flash’s fate since issue 2 and now it’s time to collect the check. 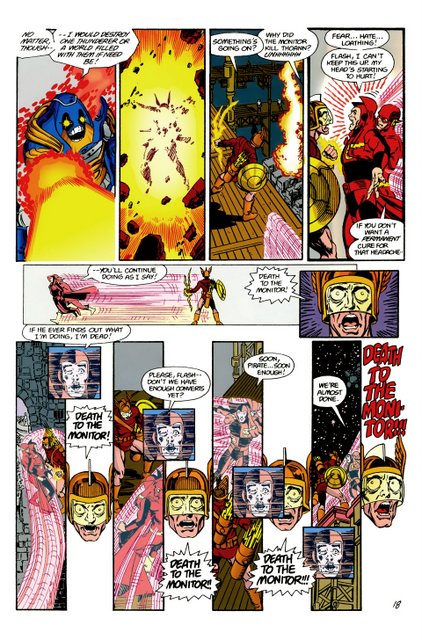 The cannon is already soaking up anti-matter to blast the Earths out of existence and to stop it, The Flash has to run faster than ever before. And now it’s the payoff to those earlier Flash visions we saw earlier…and one we haven’t seen…yet.

The George Perez on pencils and inker Jerry Ordway combination is one of those collaborations where it doesn’t get much better in comics’ history. They do some amazing work this issue from the grieving heroes, the desperation to save Red Tornado and that sense of exhilaration as The Flash looks to stop the Anti-Monitor once and for all.

If you paid attention, Wolfman continually put The Flash and Supergirl in the most positive light early on in Crisis. It was them, not Superman, Batman or Wonder Woman who were used as the shining examples of heroism and sacrifice so far in the event.

Before they occurred every other month, superhero deaths actually meant something. I’d put Supergirl and Phoenix at 1A and 1B with The Flash either 1C or a very close 2. It’s wild how event after event after event, few hero deaths come close to feeling this significant or important. 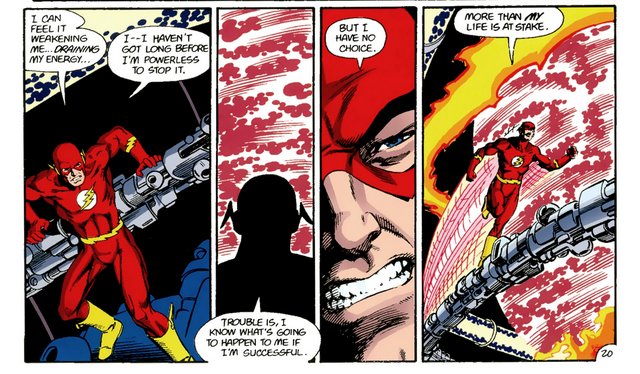 These deaths mean a lot as they push The Anti-Monitor to the brink and he wipes out his anti-matter multiverse to get revenge on the heroes, setting up the next great conflict.

Losing Supergirl last issue was a gut punch, but losing Flash (and Red Tornado) the very next issue was a killer. It could have felt like major death overload, but Wolfman and Perez make this every bit as unsettling and emotional while truly establishing a sense that no one is safe in this Crisis.