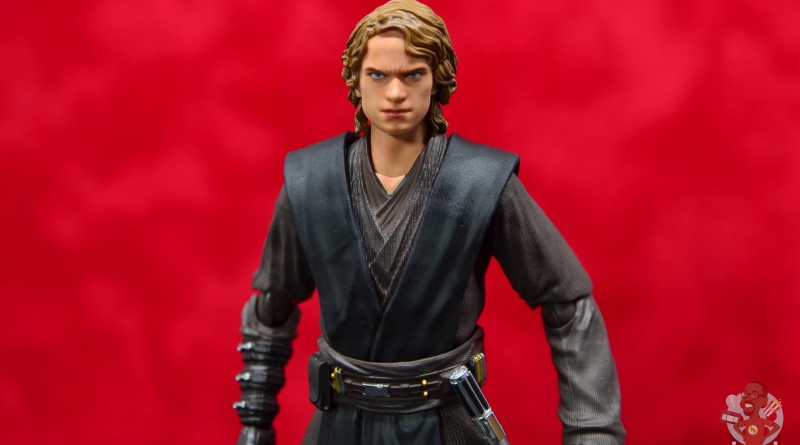 As divisive as the Sequel Trilogy has been I don’t think there’s a ton of debating that Revenge of the Sith is the best of the prequels. Anakin’s fall to the Dark Side played out like a real tragedy and gave the character more meaning beyond the black clad red lightsaber wielding heavy of the Original Trilogy. I scraped my pennies together to get the Attack of the Clones version, but this time I didn’t have to break the bank for SH Figuarts Revenge of the Sith Anakin Skywalker. Let’s see if this is the chosen one.

Packaging:  Figuarts puts minimal work into the packaging just adding a few pictures of possible display options and showing the various accessories. It’s nothing exciting by any means.

Likeness:  The big question probably is does this figure blow away the Hasbro The Black Series version, which is available for $20. It’s a matter of preference and budget. Hasbro incorporated some soft good elements that get a little fussy in posing and the likeness is almost there. 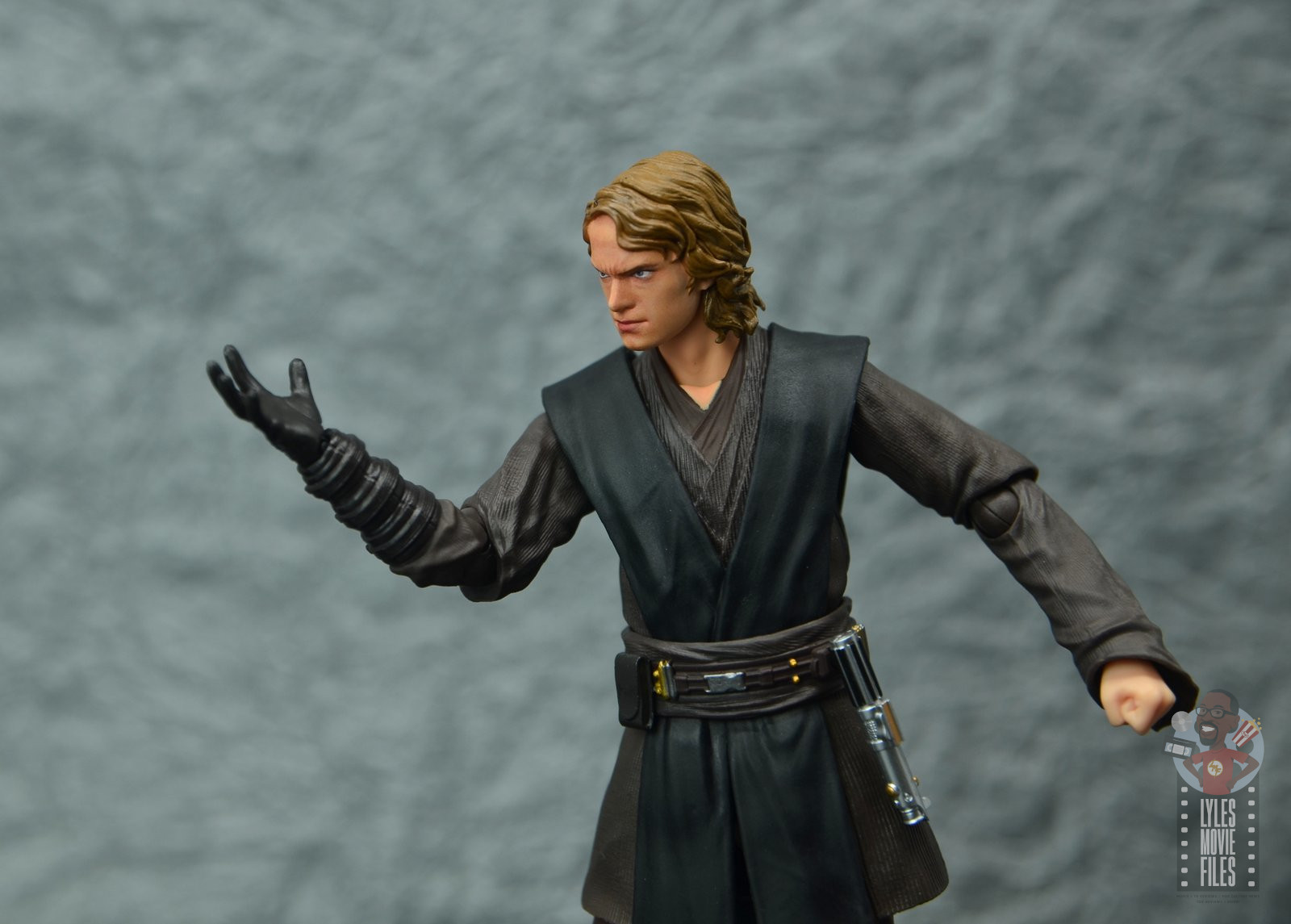 Figuarts version has more of Hayden Christensen’s likeness and from a side shot it looks great. The frontal version is trickier thanks to the five head. The hair sits too high on the forehead and doesn’t flow down as long as it should. This seems like the biggest issue with getting the likeness just right and it’s really just a problem from straight on. 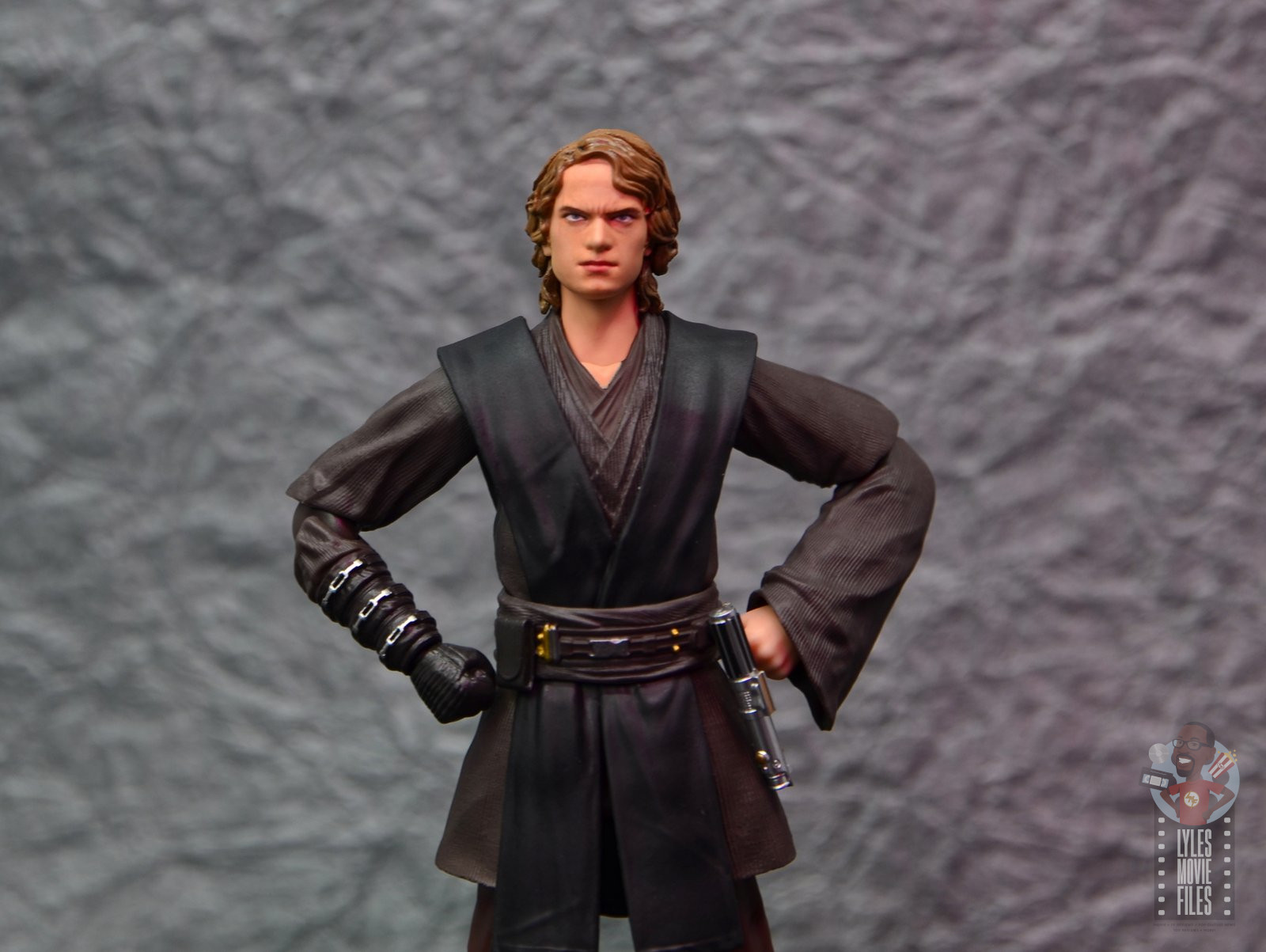 I also don’t love the overly serious expression. It only really works in an action pose and with three head sculpt options it would have been nice to get a basic neutral expression. 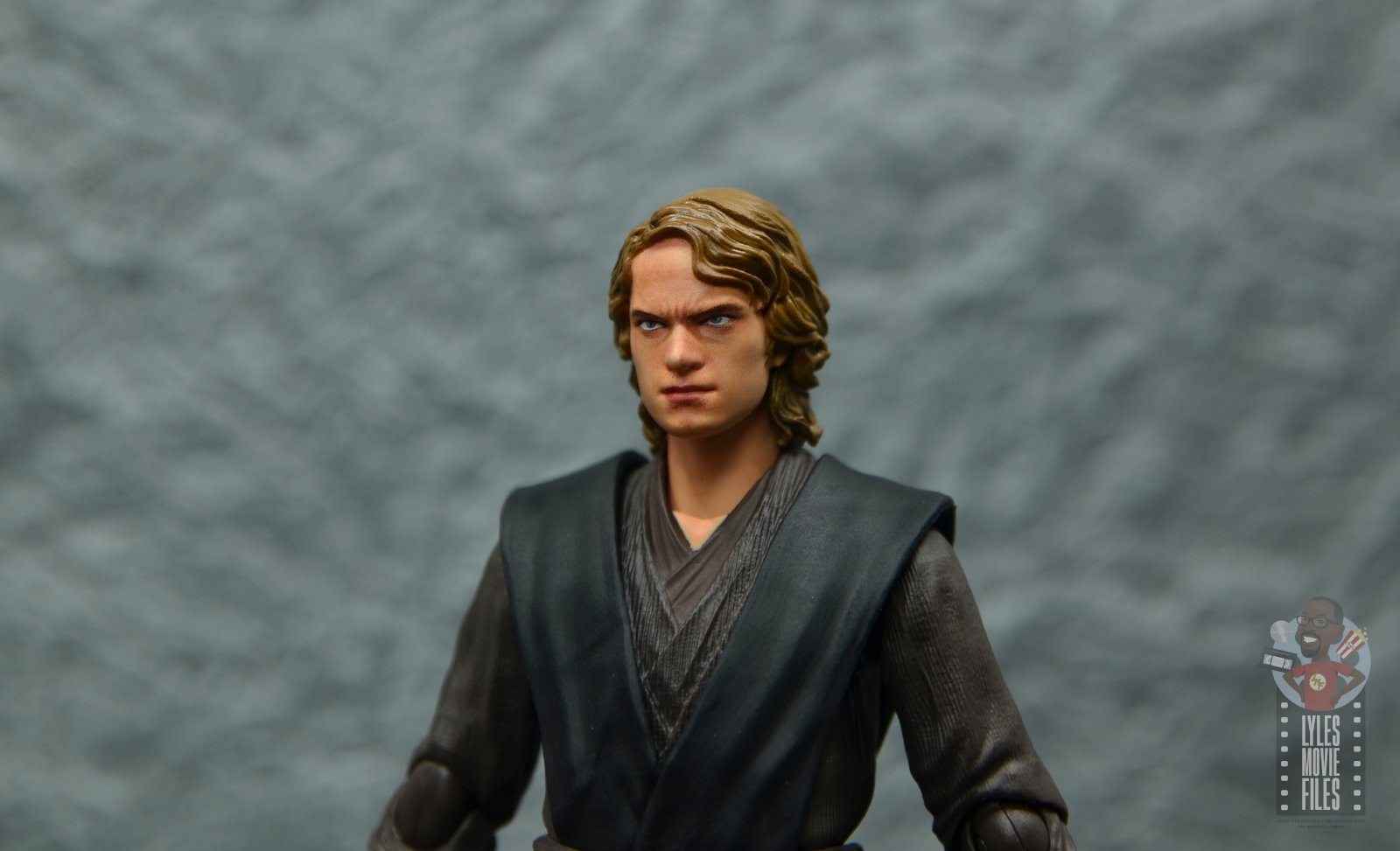 Anakin’s attire has some noticeable changes from his Attack of the Clones costume further reflecting his leaning towards the Dark Side. The outfit turned out very nice with sculpted lines in the under tunic with the outer tunic sculpted to reflect a more leather-like material. Anakin’s belt is rendered nicely with the pouches scaled properly. 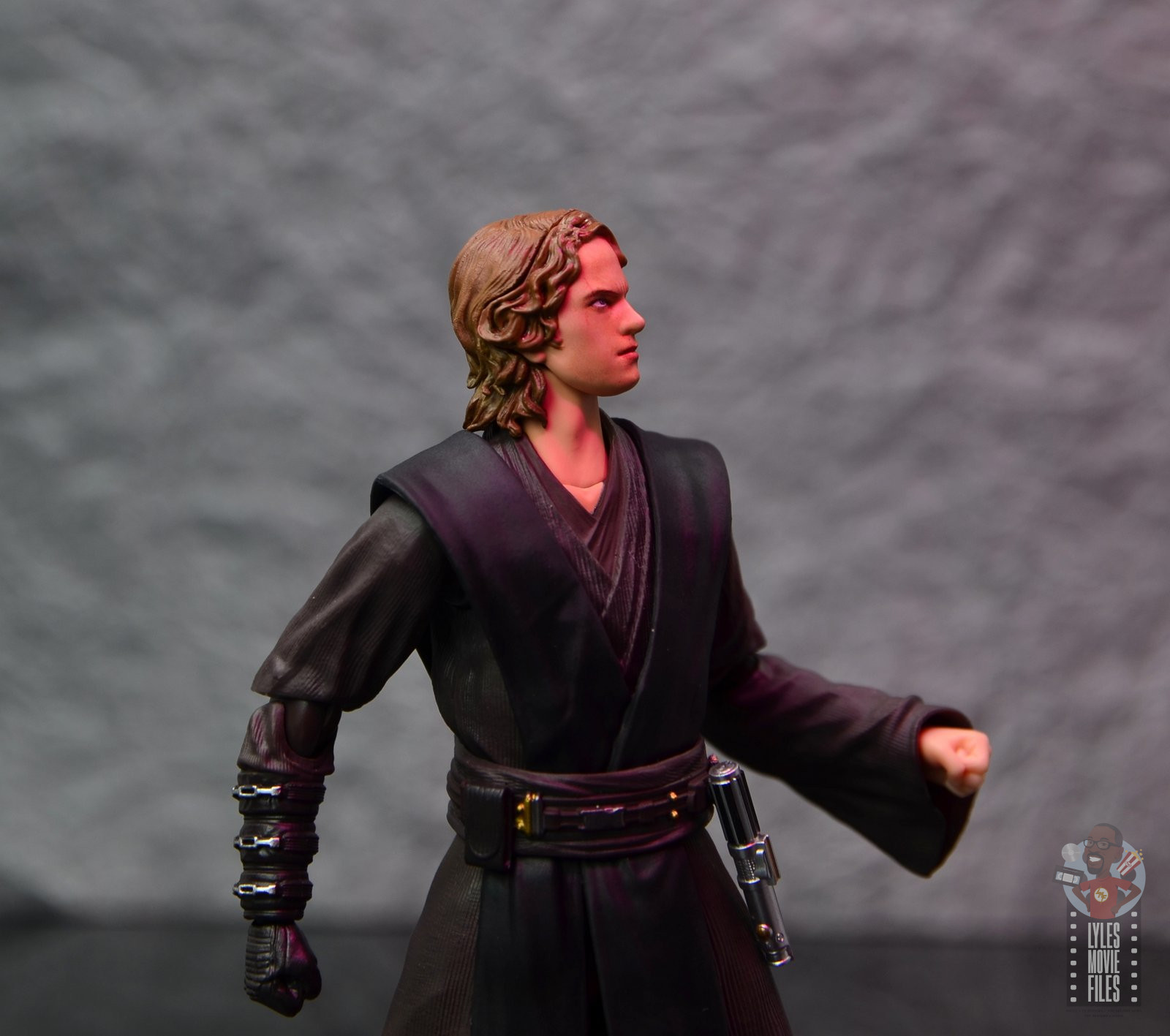 Maybe my favorite part of the sculpt is the right hand with the various buckles and ridges that tease Darth Vader’s costume. 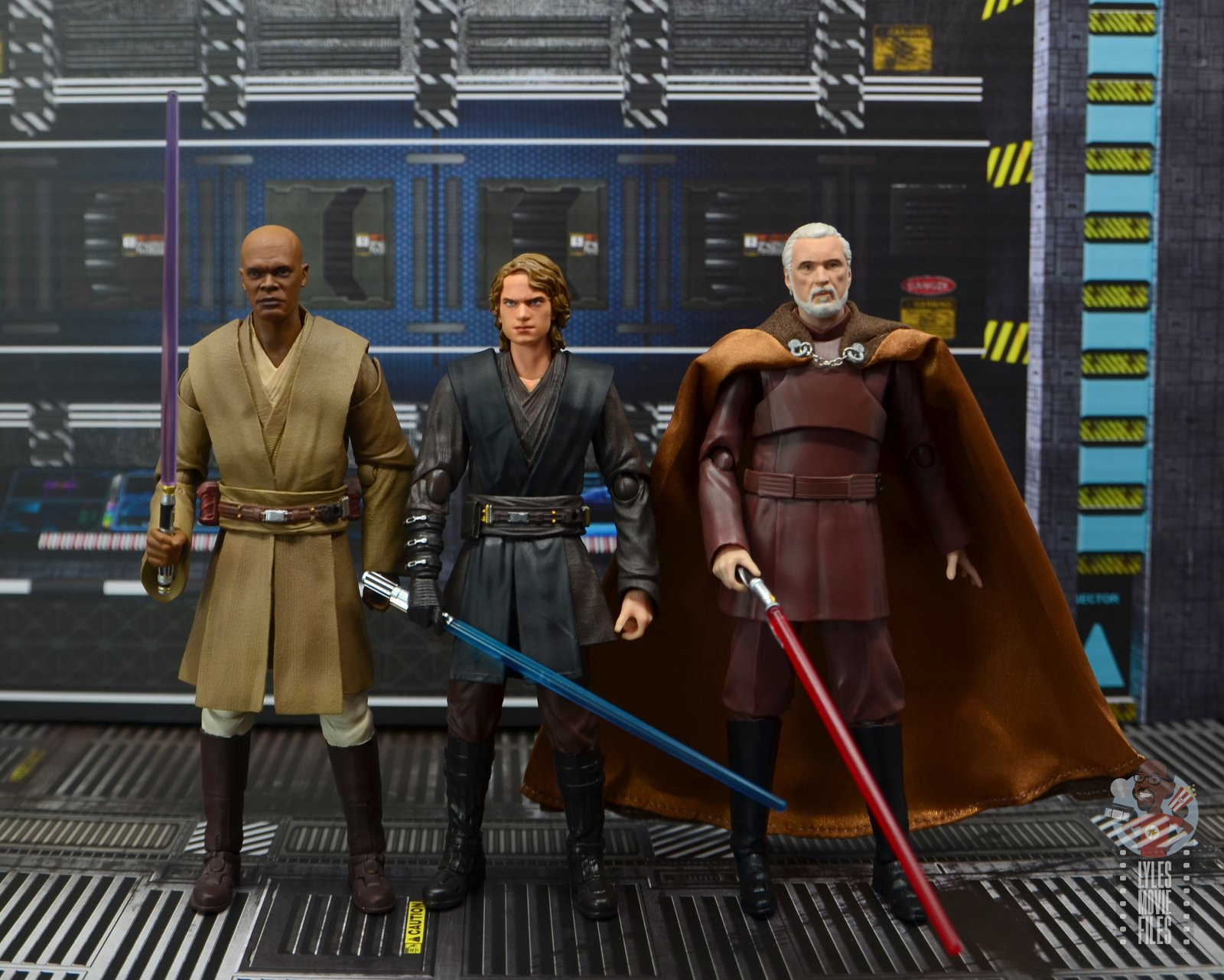 Scale:  Figuarts just about nailed the height perfectly. In the films Anakin is about half a head shorter than Mace Windu so he would be eye level to Mace’s nose. This figure is a tad shorter, but it’s not so far off that it looks bad. 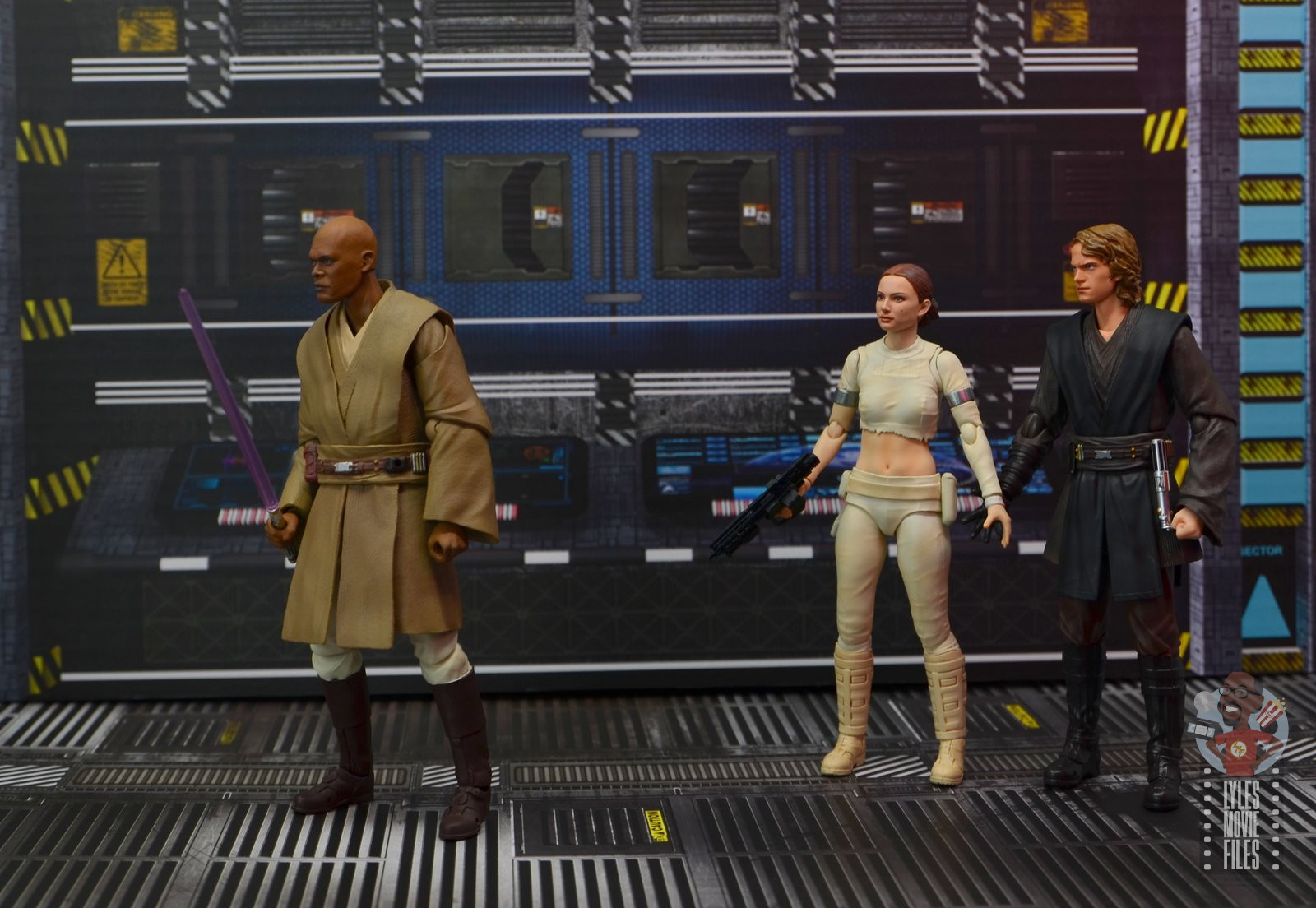 Paint:  There weren’t any puzzling paint choices like with Count Dooku as Anakin’s color scheme matches up with the big screen model. More specifically it looks like it appears on screen regardless of the actual color.

Articulation:  The articulation might be the one thing beyond the price that makes Figuarts superior to the Hasbro versions. Anakin can be posed in a variety of fitting Jedi poses. The joints pop off to prevent breakage and easily reconnect. I had far less trouble this time swapping the various hands for Anakin. 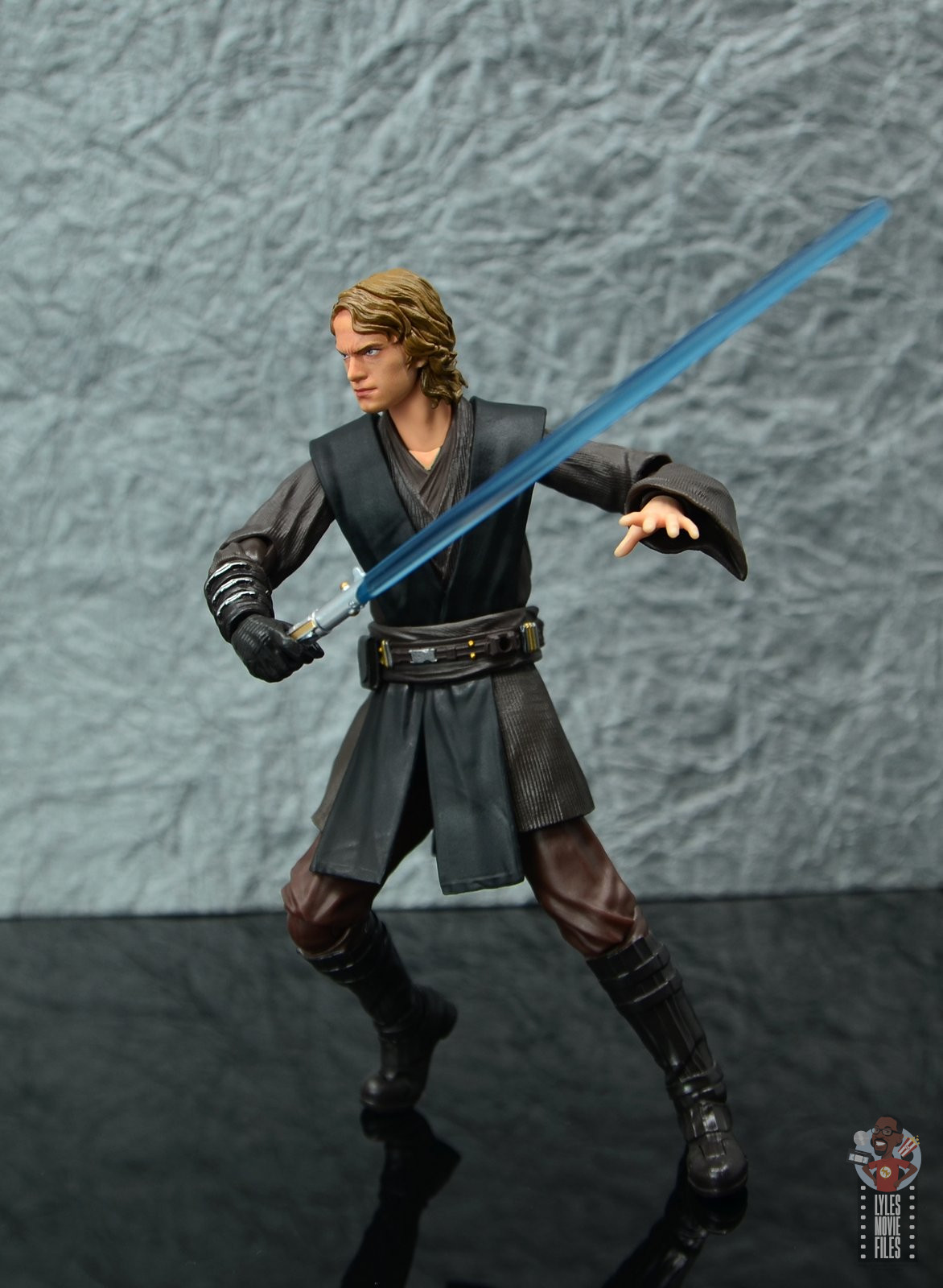 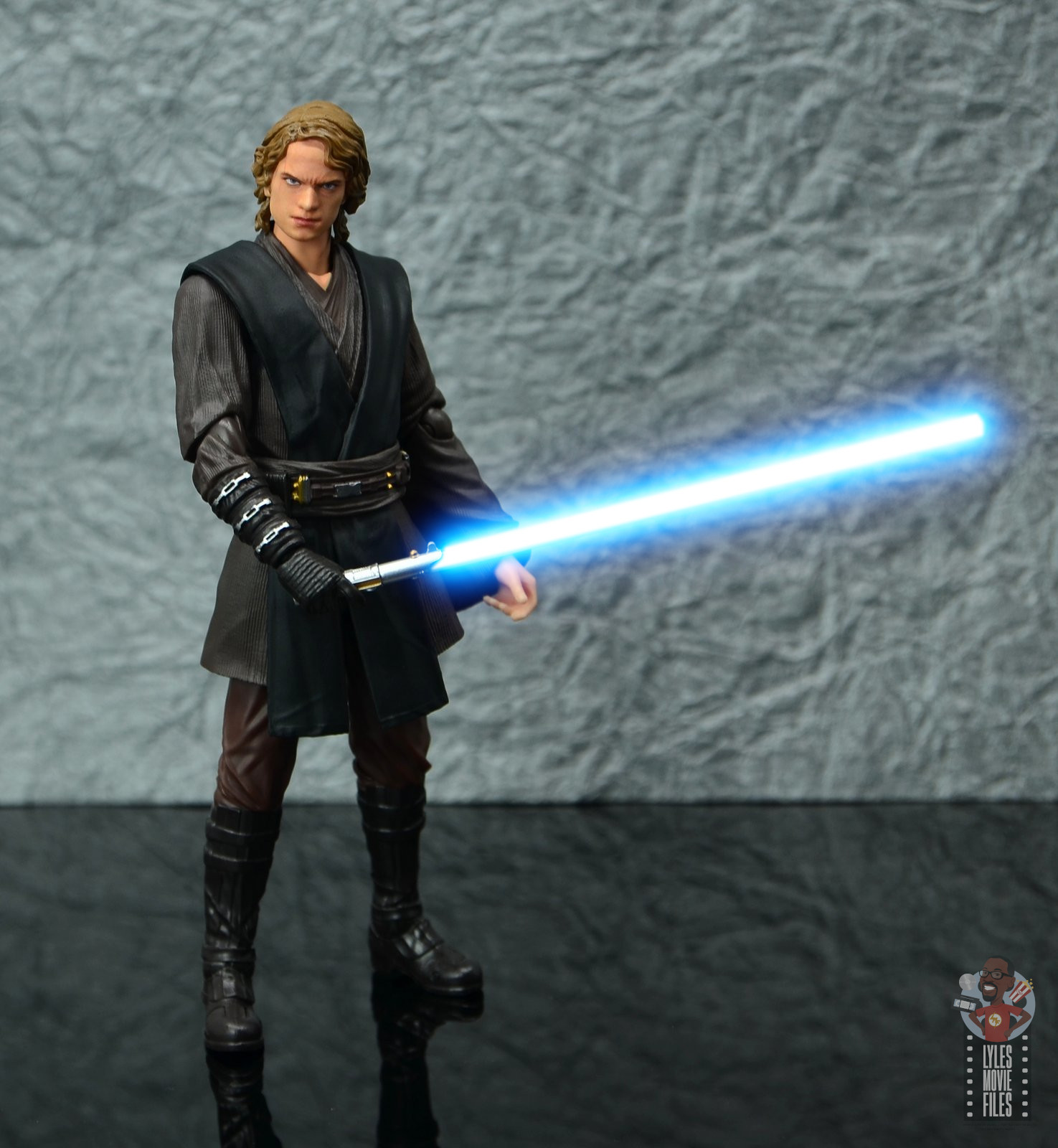 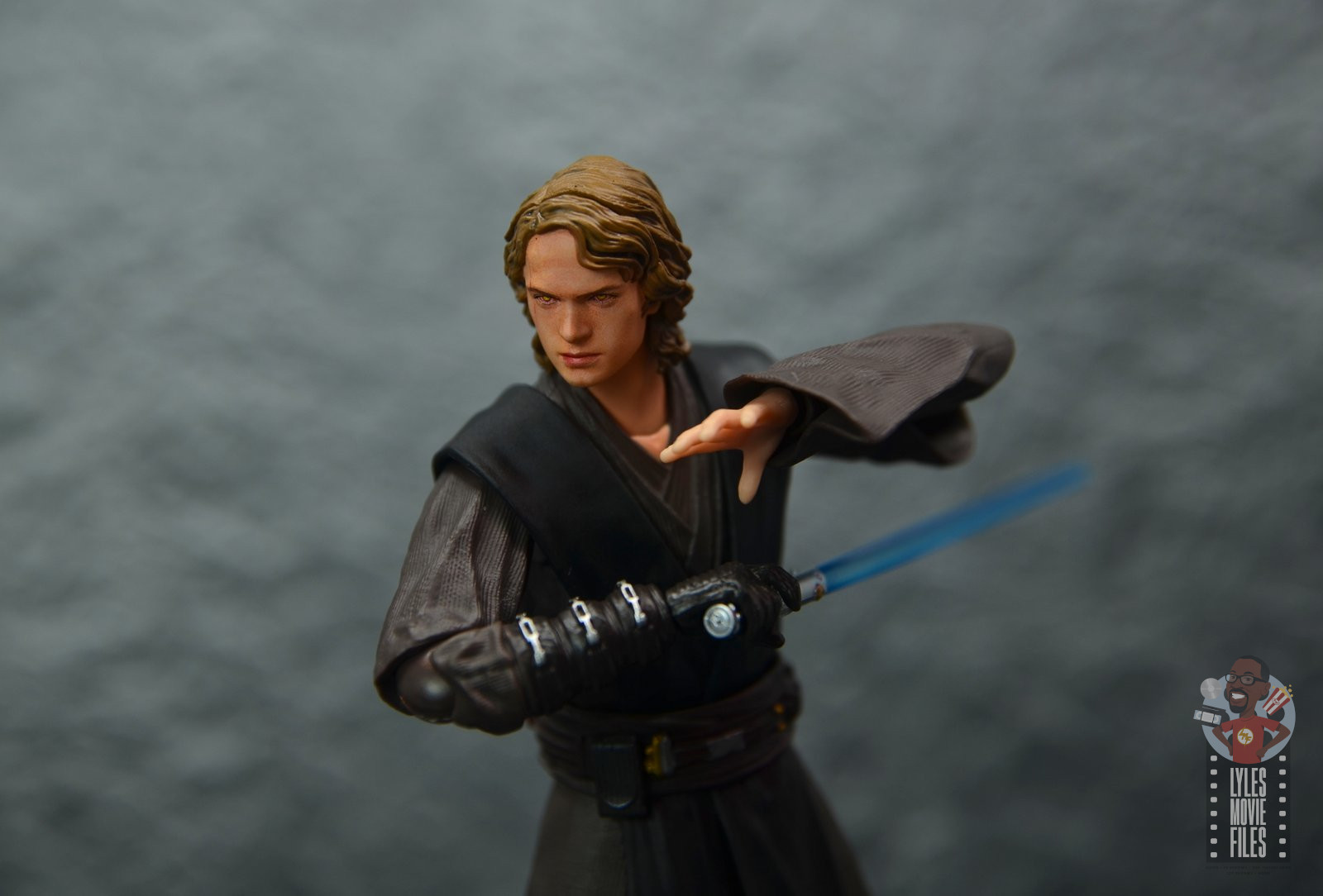 Accessories:  Anakin comes with a decent amount of accessories though it’s arguably missing the two most important. 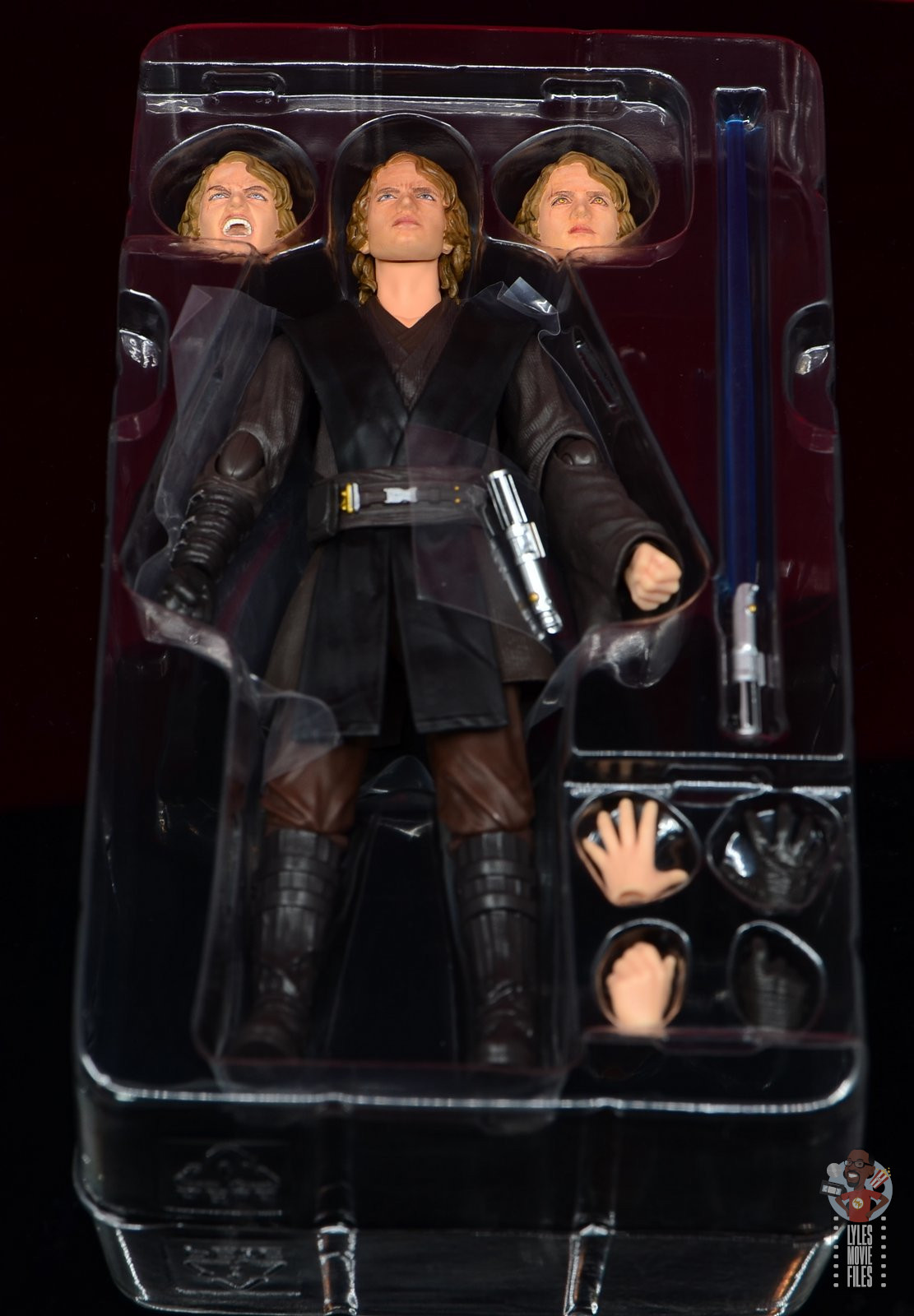 He comes with two other face plates. One is the raving “I hate you!” screaming face that is so moment specific it doesn’t work well in another context. It’s too mad for battling droids and dueling with Dooku. 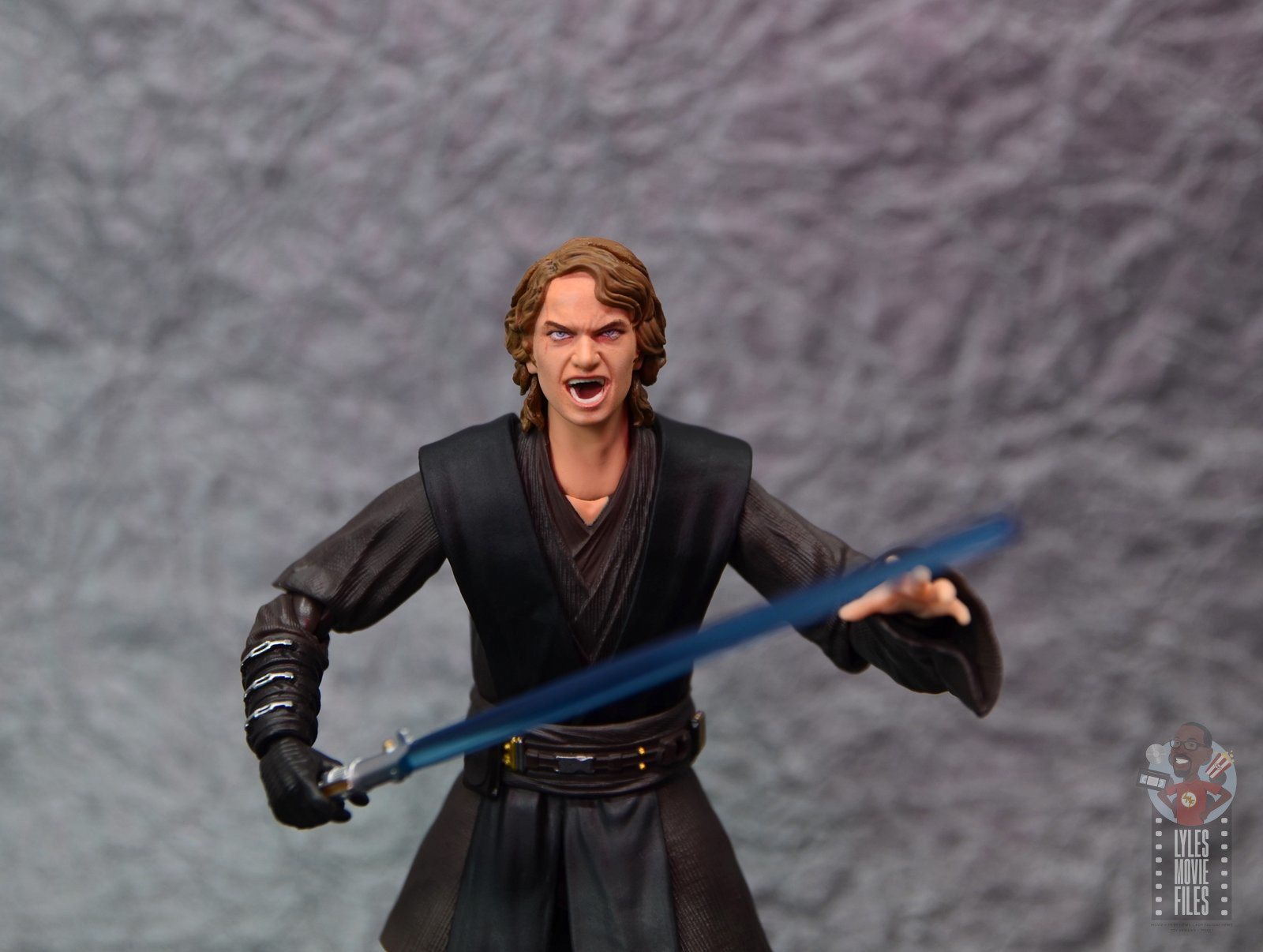 The other is a neutral Sith eyes plate. This is the best sculpt since it’s not the seriously focused expression of the default plate. From a distance you can’t really tell it’s also from a specific moment. I wish Figuarts just made that the standard expression minus the extra paint apps. 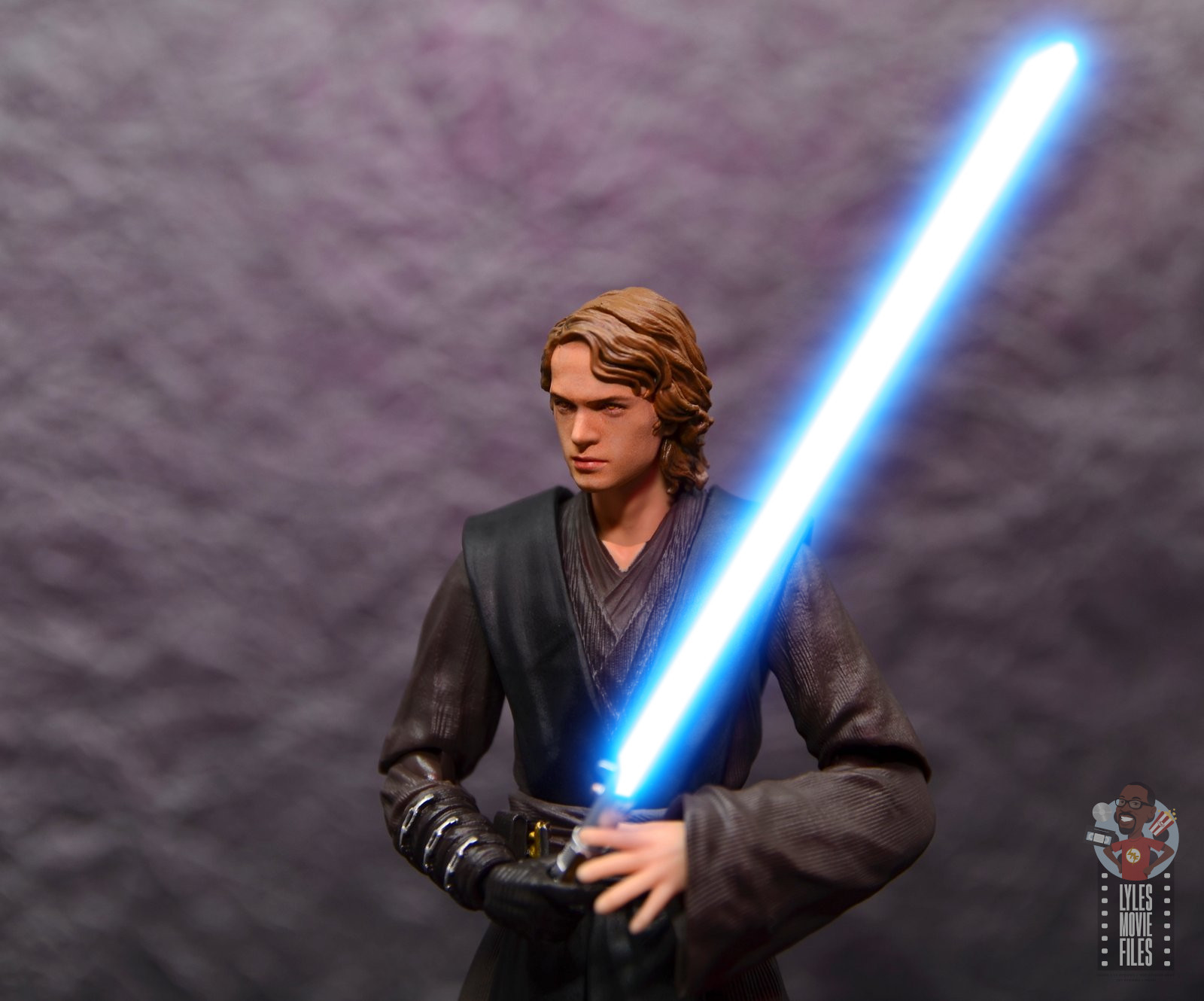 Anakin also gets a lit lightsaber and an unlit version to clip on his belt. The scale and detailing on this is nice and the saber plus into the belt without any issue. 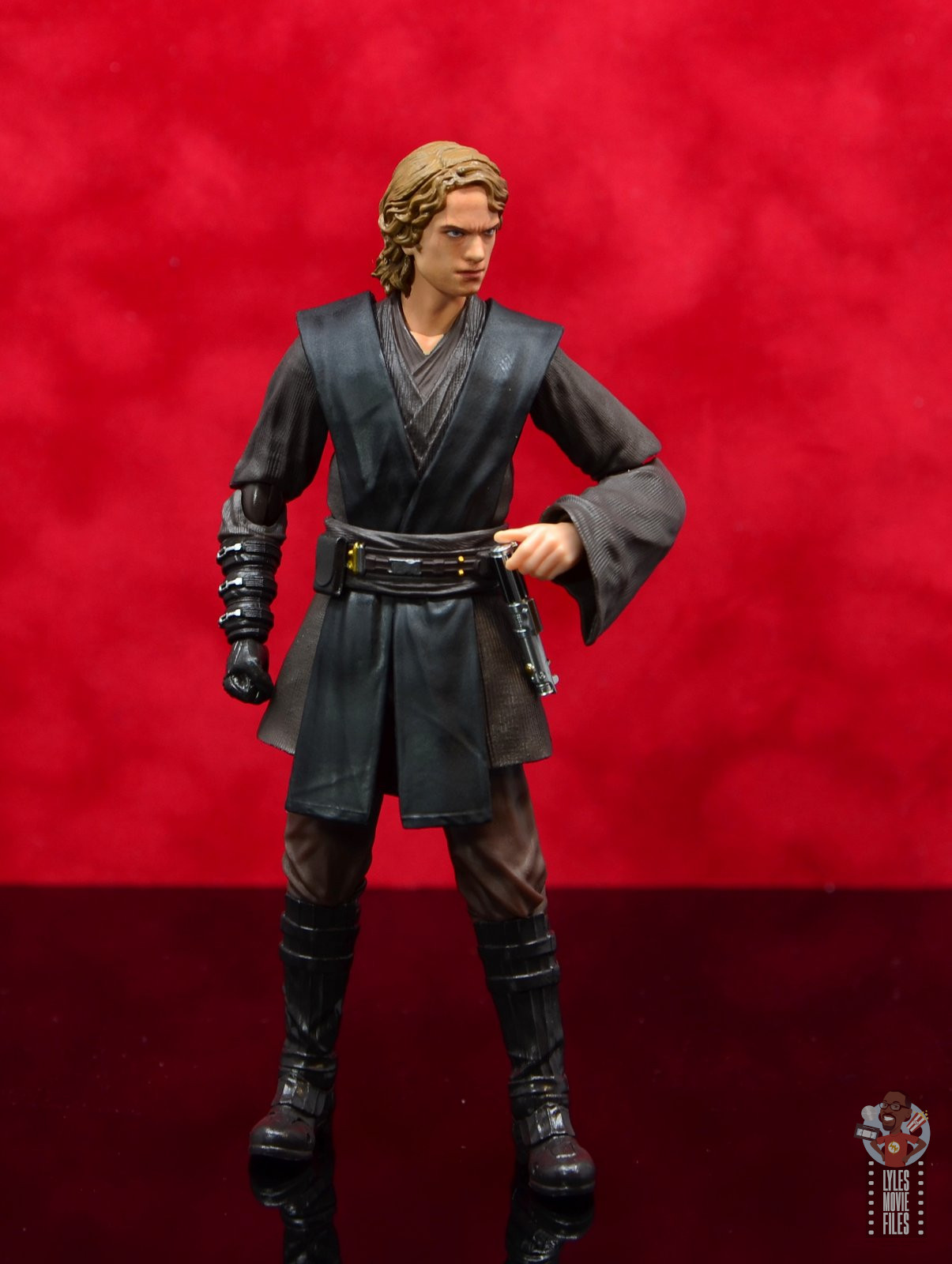 There’s three sets of hands: force gesturing, fists and lightsaber grabbing. These swap out with no trouble. My biggest complaint especially at this price point is the lack of a Jedi robe. It’s such a key omission and limits some of the fun display options you could have with Anakin’s fall to the Sith especially since we can’t truly replicate his betrayal of Mace.

Worth It?  The trick with Figuarts figures is to normally get them early. Wait too late and you’ll end up paying double. I got Anakin for $62, three times as much as the Hasbro version, but still relatively decently priced. Now the figure clocks in at $96. I don’t know if I think he’s $100 worth though if you’ve got a Revenge of the Sith collection rolling you kinda need the pivotal character. 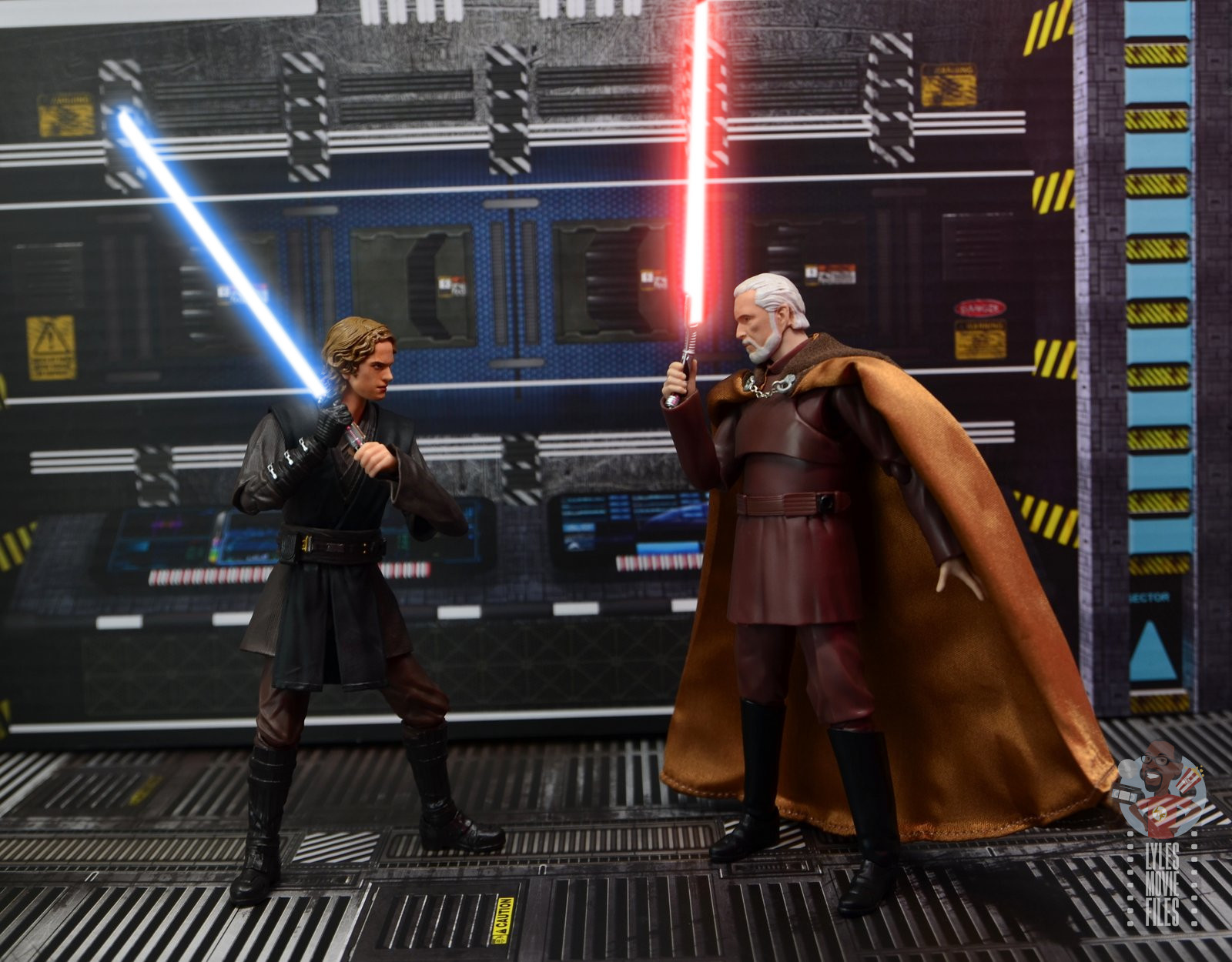 I love a lot about this figure, but the lack of a definitive Anakin head sculpt and robe really hurts. 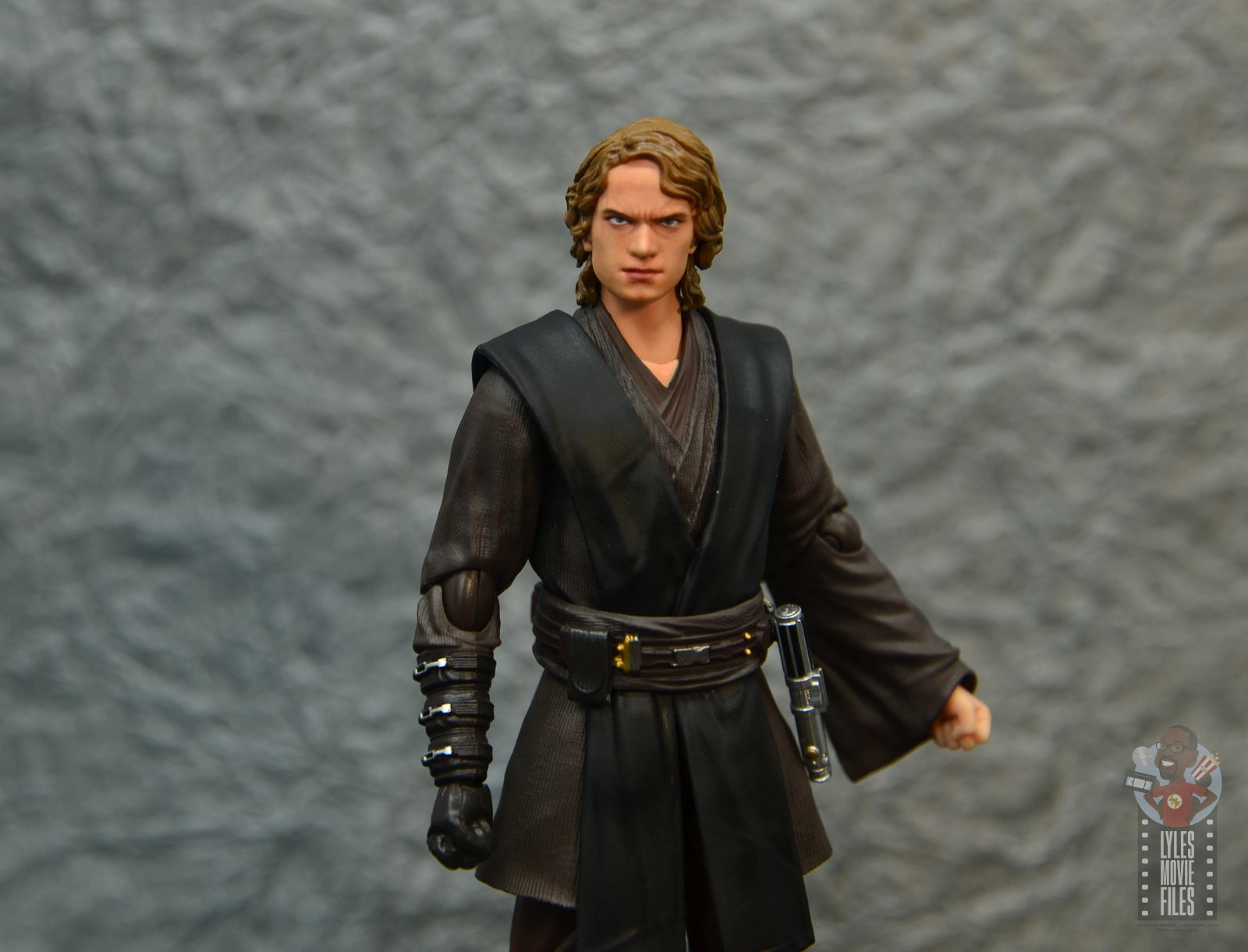 Where to Get it? Amazon has him in stock now so that’s the easiest and best bet at this point.