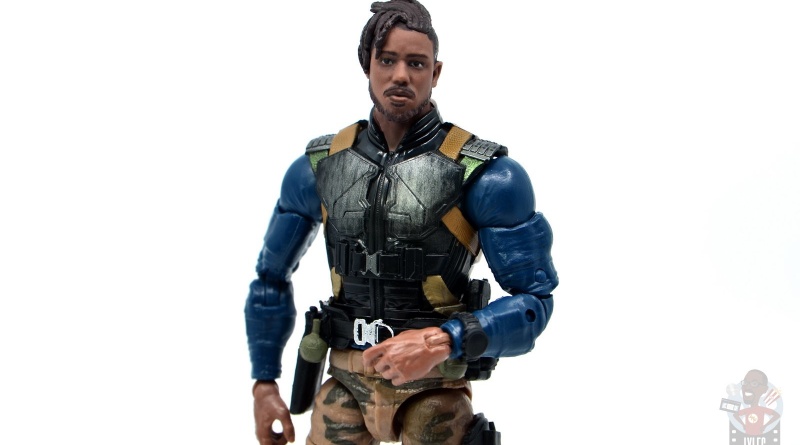 Were it not for Thanos raining fire and killing off half the universe and Baron Zemo destroying the Avengers, Erik Killmonger would be my favorite MCU villain. The guy had a great scheme and executed it to perfection besides not making sure his cousin was dead. Killmonger had a number of looks in Black Panther, but my favorite is probably his tactical suit just because it fits within the context of the MCU and looks cooler than his gold trim Panther suit.

We’d gotten the former already so Hasbro decided it made sense to tackle his first battle attire with Wave 2 of the Black Panther Marvel Legends wave. Let’s see if this is a figure worthy of introducing to auntie.

Packaging:  No change from the blue and orange color scheme we’ve seen with the rest of the BP wave. That helps the figure to pop in the packaging. I like the side portrait and the bio explains Killmonger’s agenda succinctly. 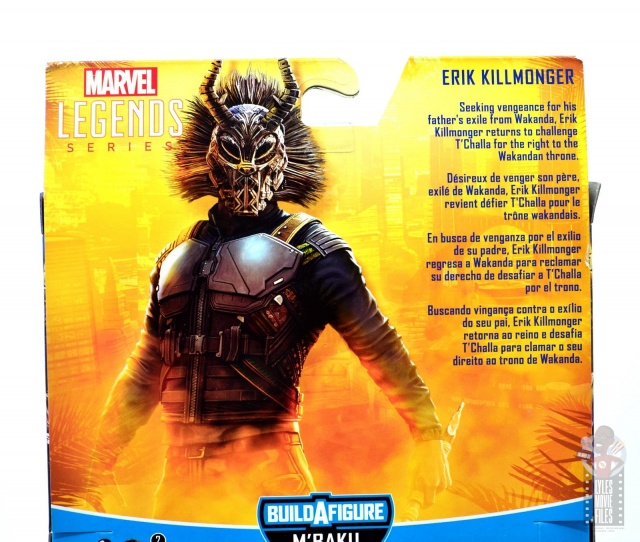 Likeness:  Hasbro has done some remarkable work with the face printing to nail the likeness down of MCU performers. Instead of a generic take, this looks like Michael B. Jordan in six-inch form, which is an impressive achievement at this scale. The hair has a nice flow and has enough detail that it doesn’t look like it was just slapped on the top of his head. 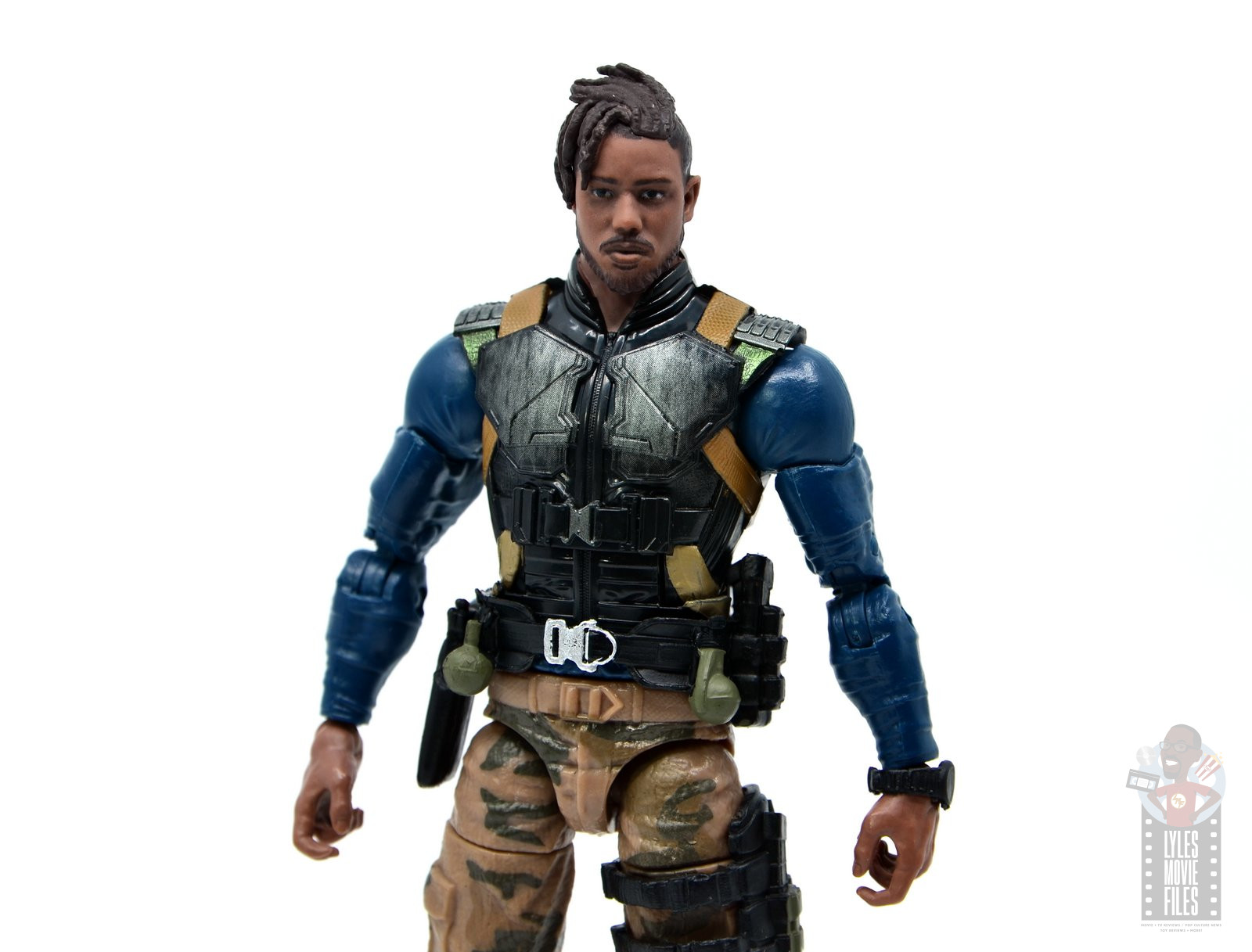 His tactical outfit is just as well executed with all of the paneling and layers as the source material. Hasbro even included his watch on his left arm and the grenades on each side of his belt. Check out the thigh strap with extra clips. That’s nice work in fully capturing the look of this outfit.

Paint:  Hasbro can take another victory lap with the paint applications. Everything is neat without any big issues. The chest plate even has some shading to reflect its metallic nature.

If you wanted to find something that wasn’t perfect you could note the shade of the pants is more light brown than two different shades of green. It’s very minor and wouldn’t be something I’d notice without looking at source material images. 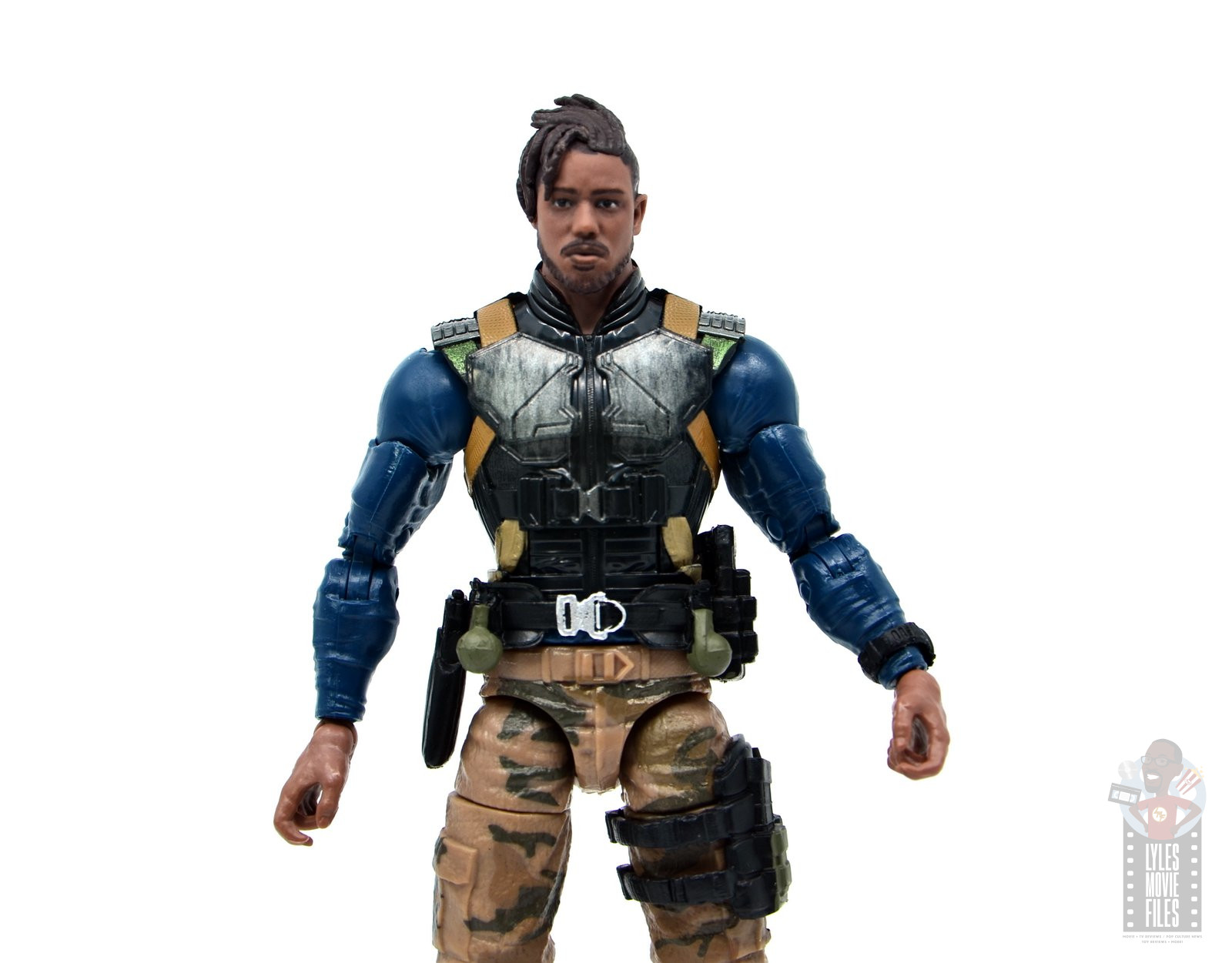 Scale:  Killmonger stands slightly taller than Black Panther and Klaue, which I think is correct from the film. He certainly doesn’t tower over them like they belong to separate lines. 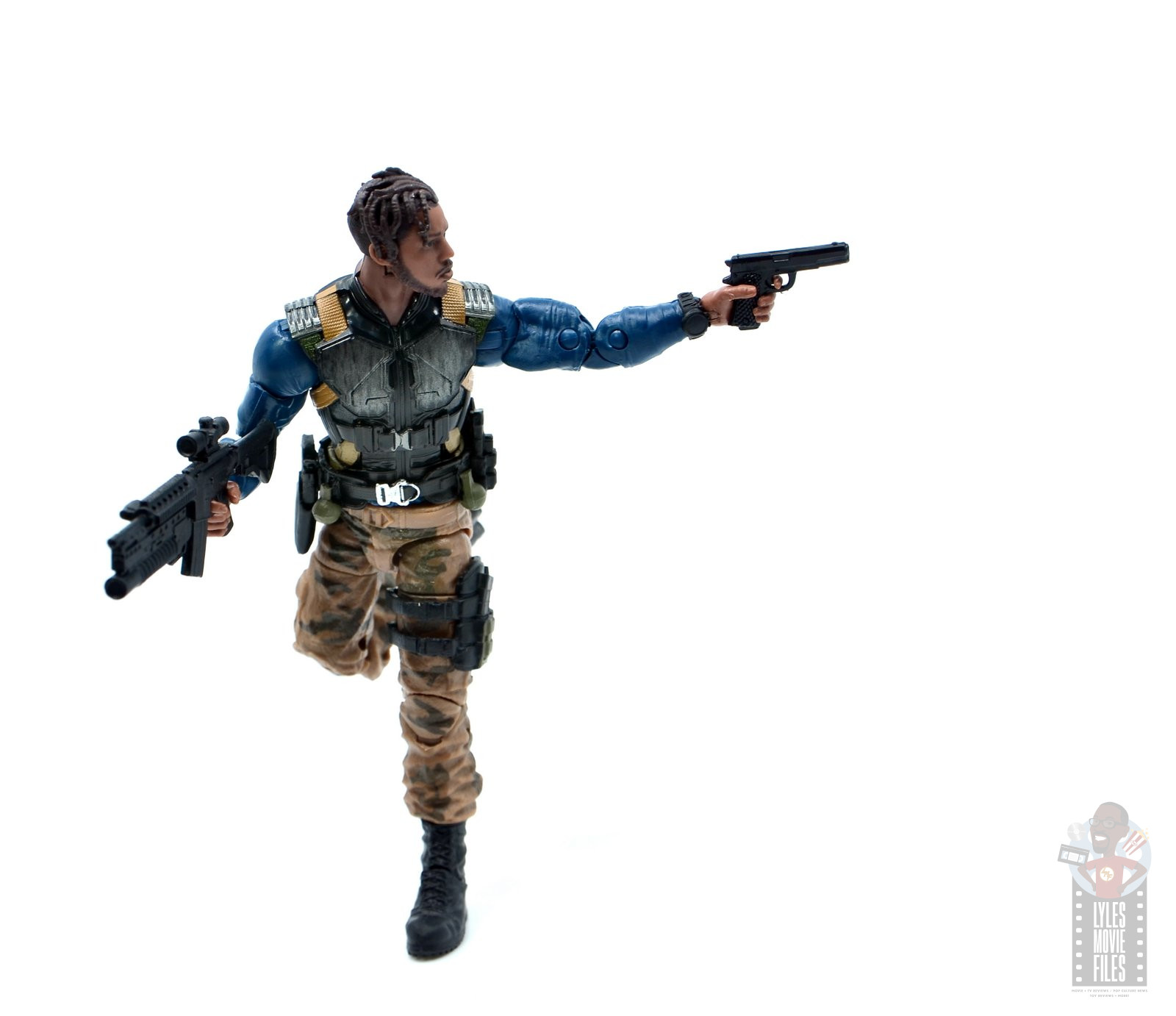 Articulation:  Due to the makeup of the bulky pants, Killmonger’s leg articulation is tighter than most Marvel Legends. The plastic used for his arms are a little soft, but not to an extent that it interfered with posing. He’s got good range with his neck as well. 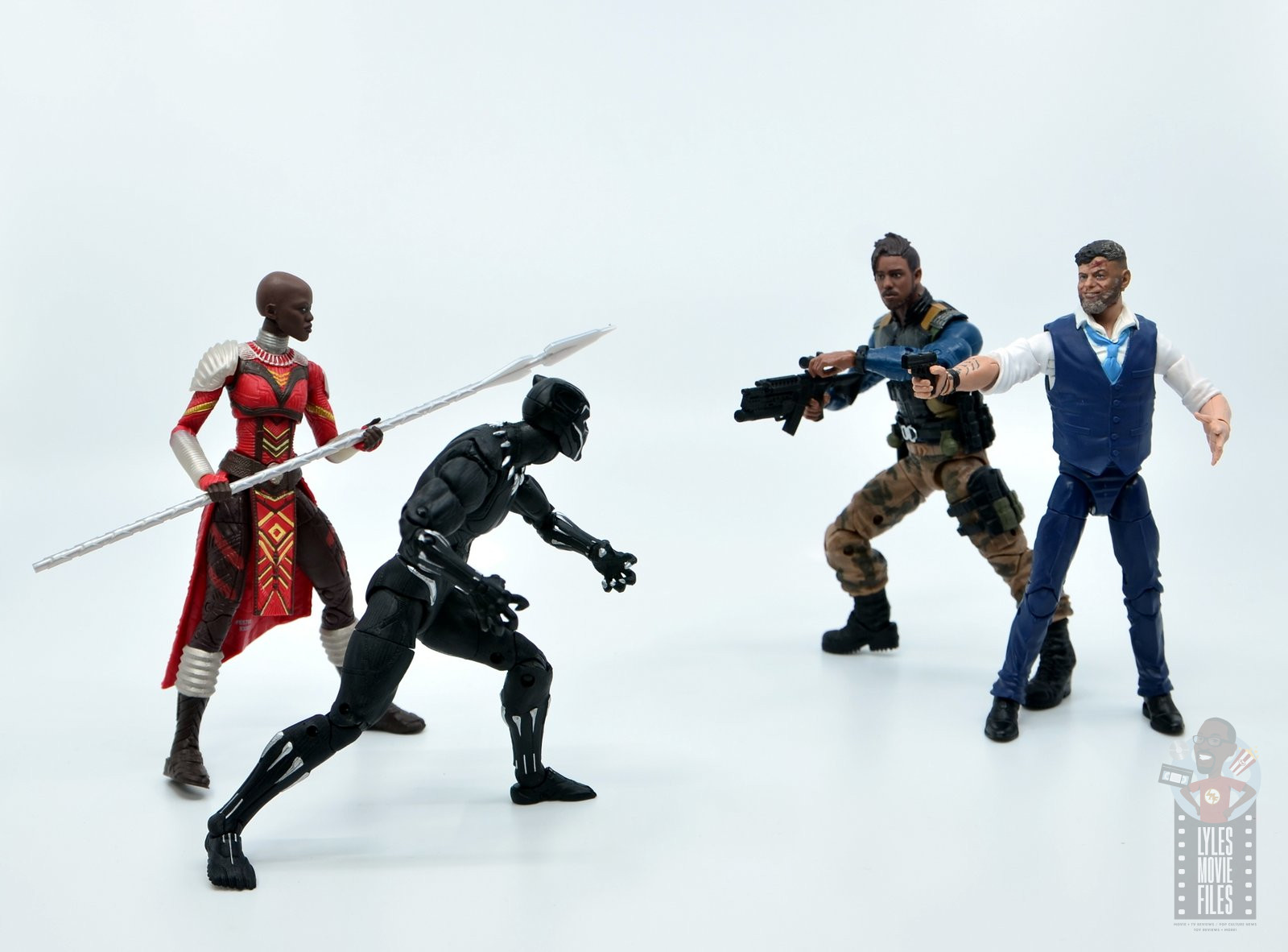 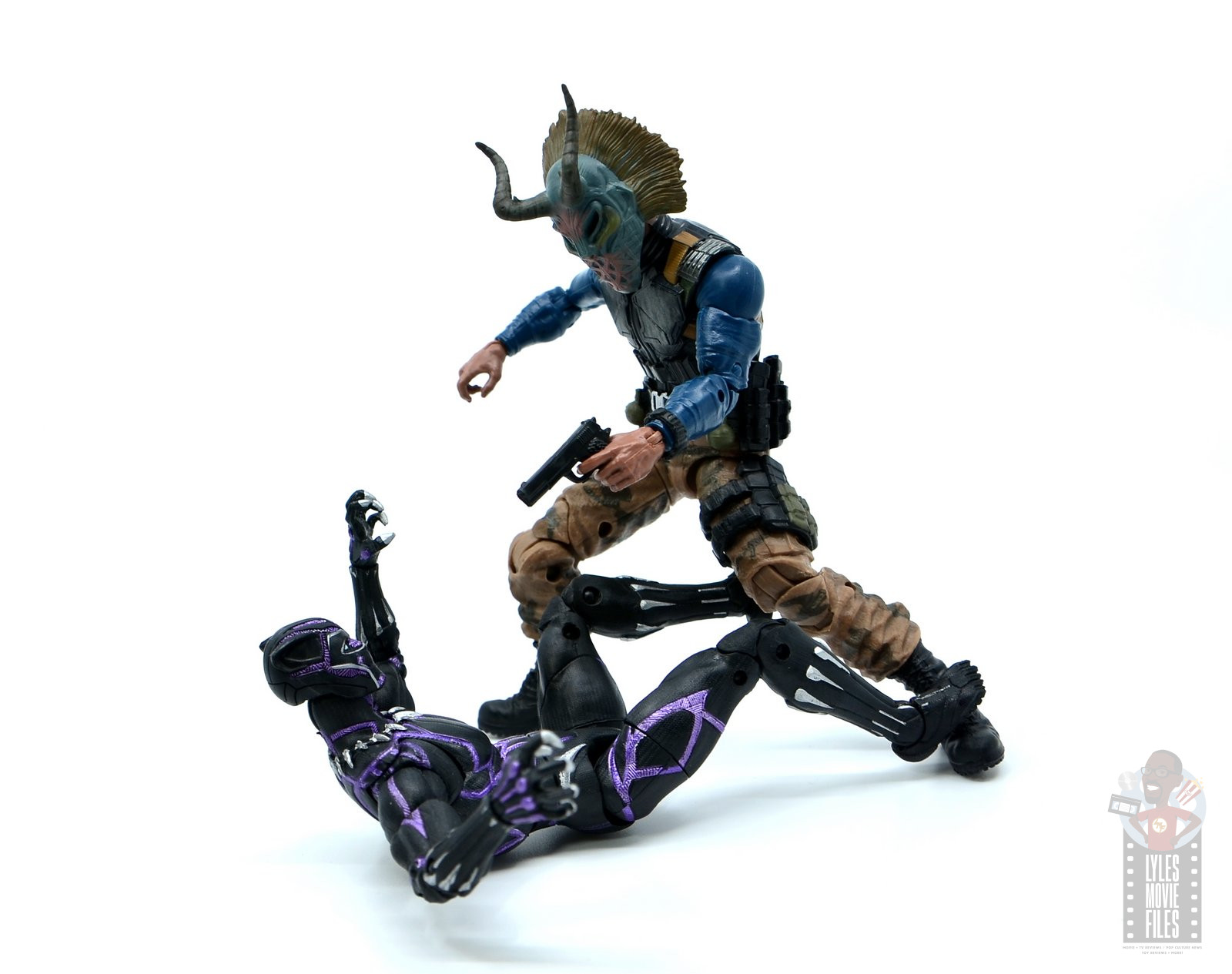 Accessories:  Killmonger comes with two weapons — his larger grenade launcher and the second, his smaller pistol that he used to kill Klaue. 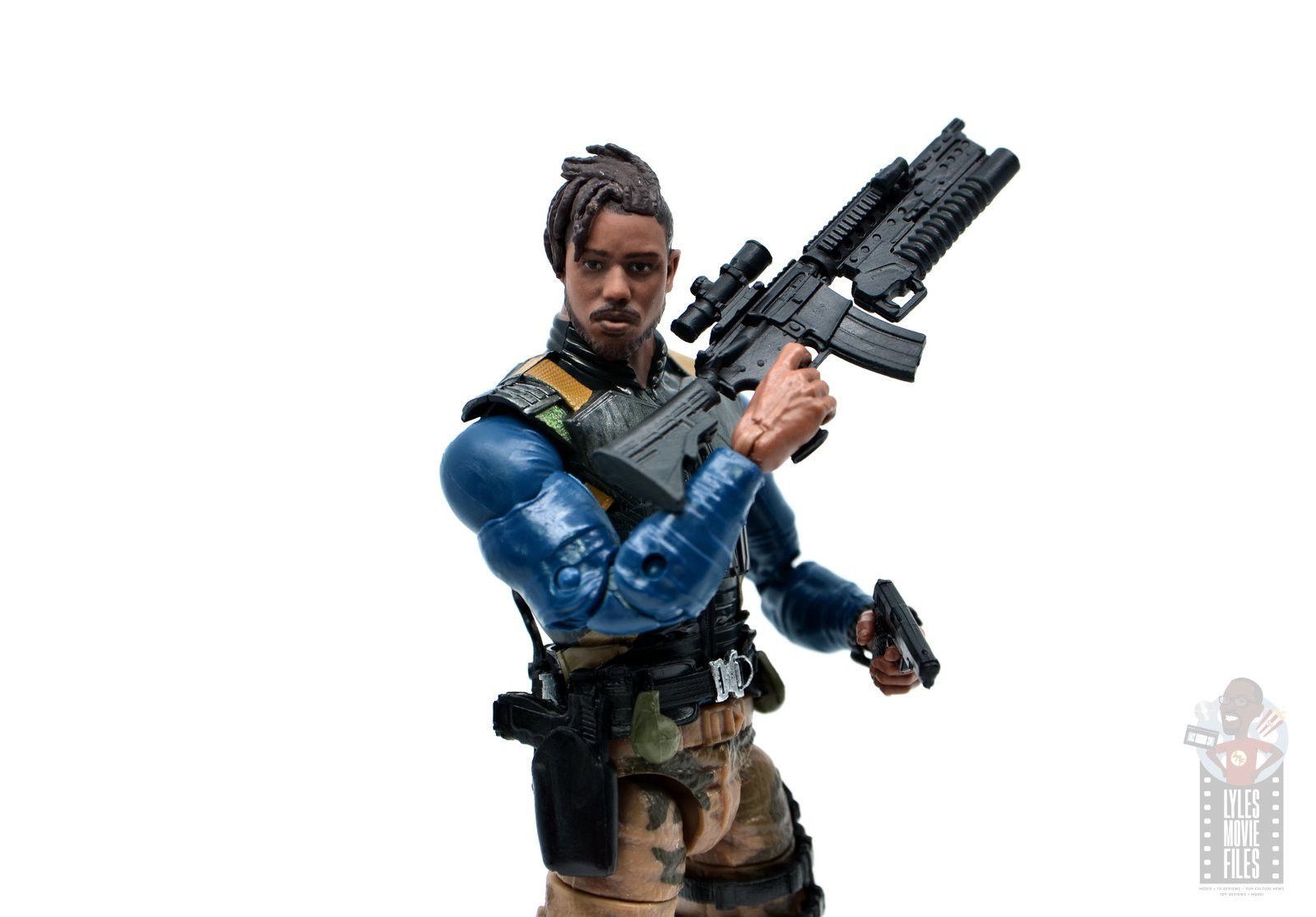 The cool thing is you can put both guns in either hand so he can actually carry all of his accessories. 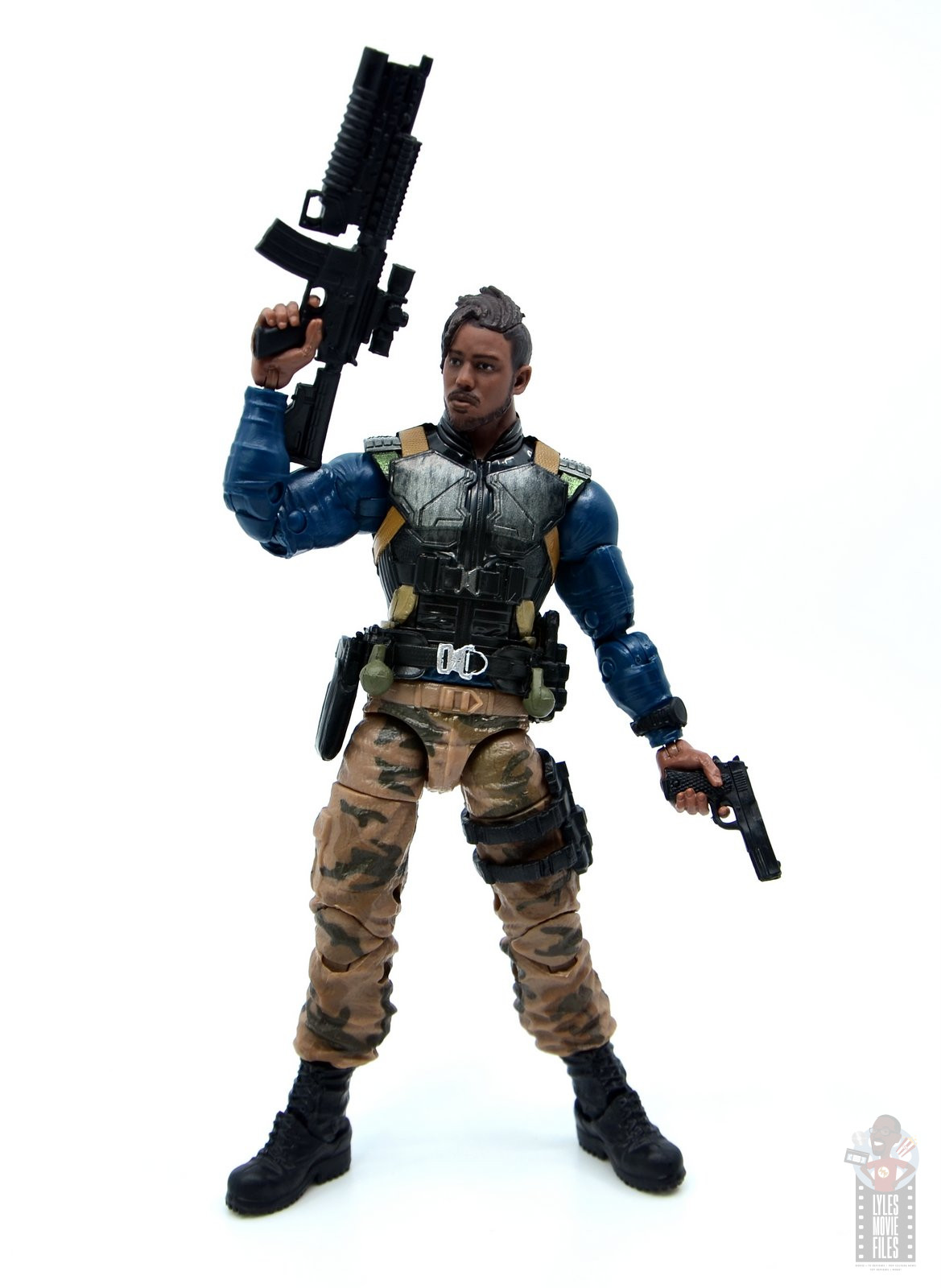 He also has the cool comic influenced Mephisto mask he stole from the museum. It fits on his face snugly and doesn’t pop off whenever I moved him, which was a nice plus. 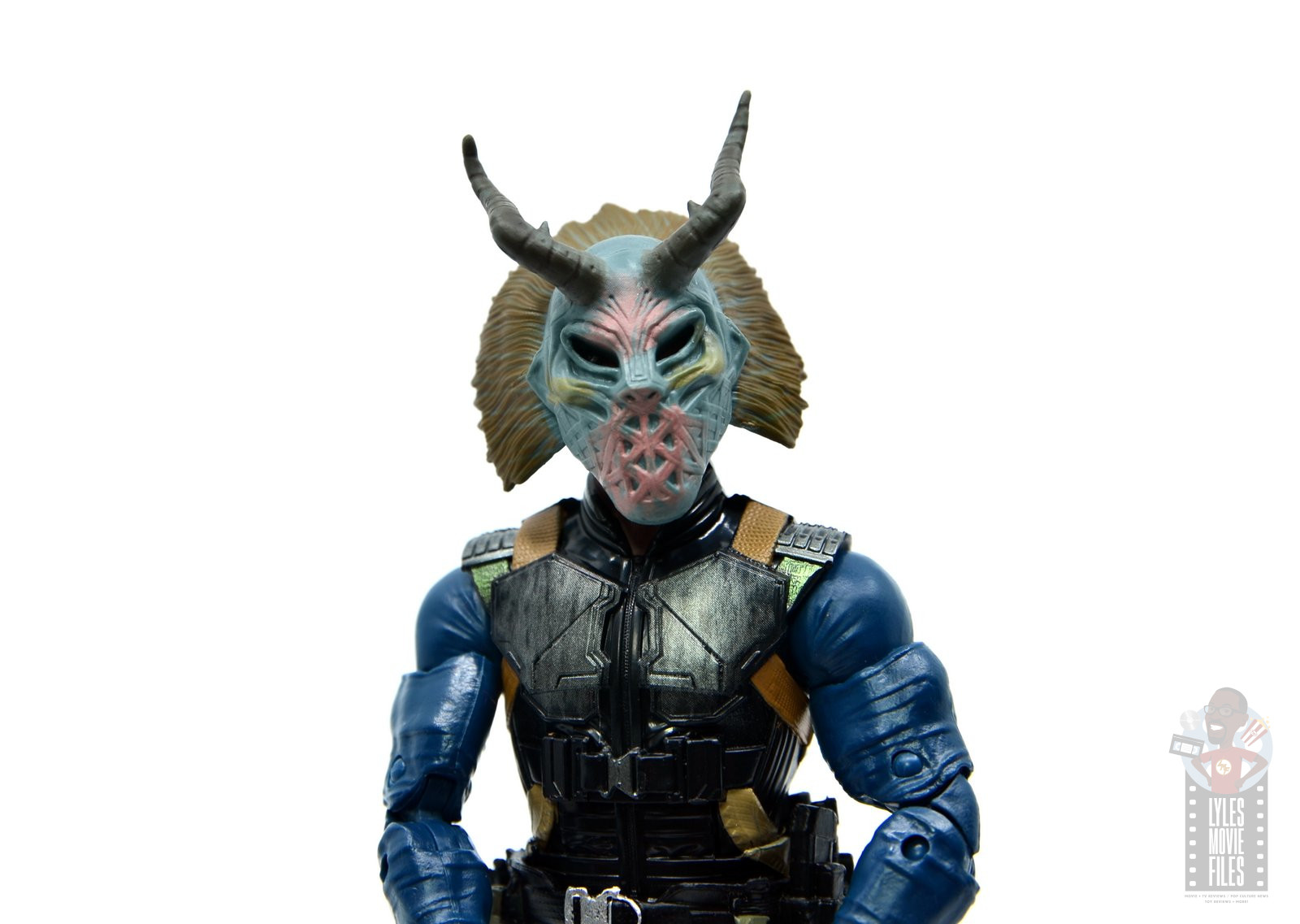 Finally, Killmonger comes with the head and staff of the Build-A-Figure M’Baku. 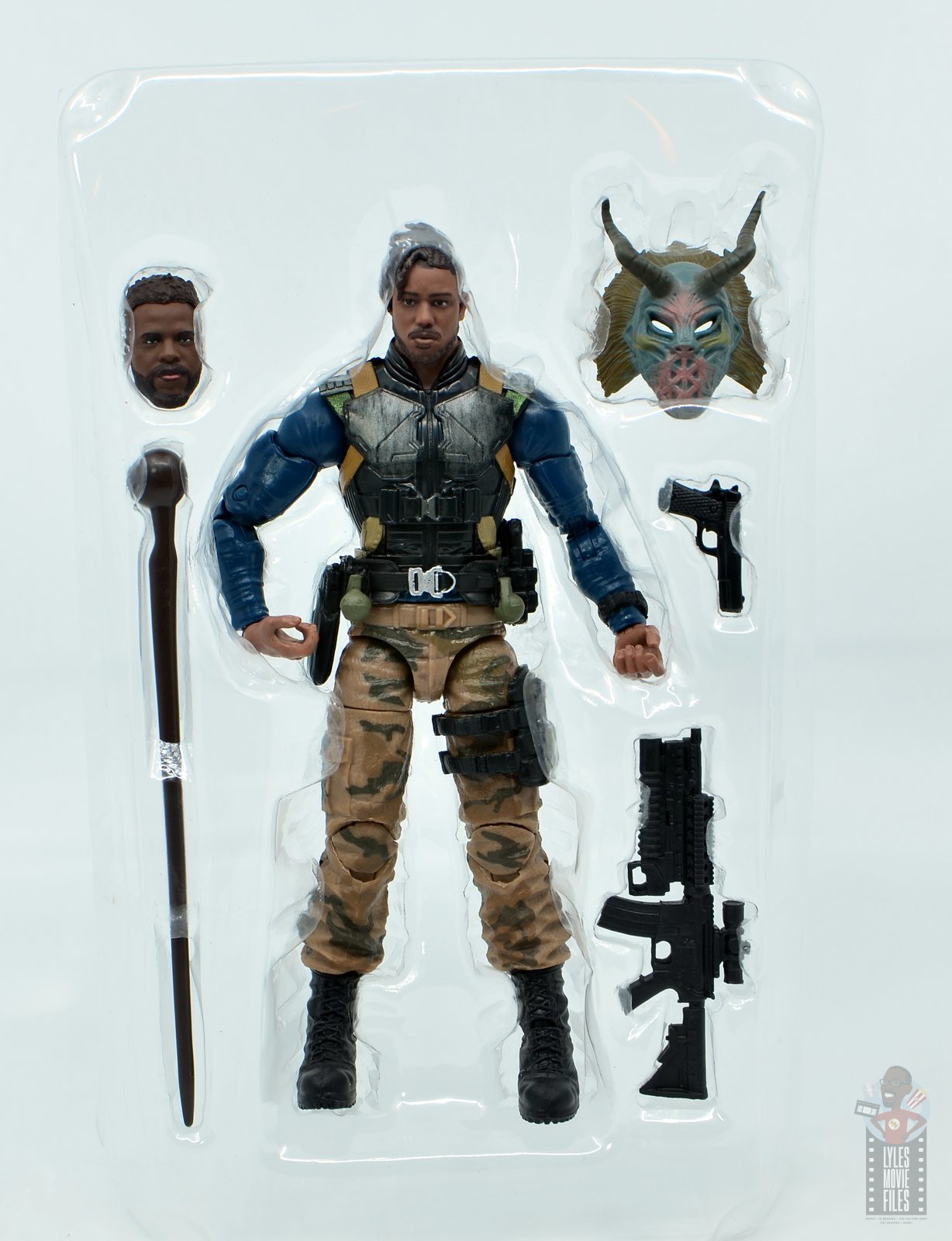 Worth it?  This was the Killmonger figure I wanted all along and I’m thrilled he turned out so nicely. The good news if you don’t have him already is you can get him for the super deal price of $12 now.

The looser right arm aside, this is a fantastic take on Killmonger

Where to get it?  I got Erik Killmonger from Amazon. You can still find this wave at Target, Wal-Mart and GameStop. Or you can always go the online route with LMF affiliates Amazon or order the full Build-A-Figure M’Baku wave at Entertainment Earth.

**As an Amazon affiliate, I receive a commission off qualifying purchases.