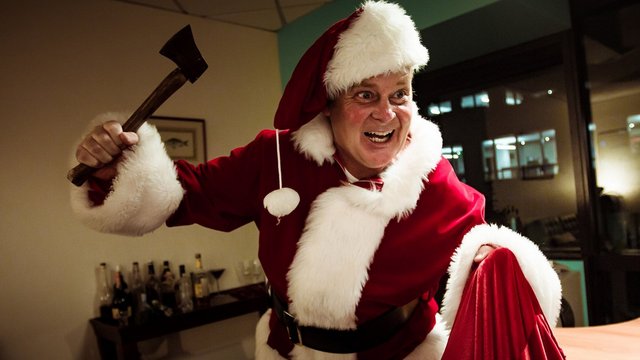 I love a good horror anthology. Halloween tends to dominate this subsection of the genre, so I was intrigued with the release of Holiday Hell, a film with stories focused on the most wonderful time of the year.

A woman (Megan Karimi-Naser) comes into a shop of oddities looking for the perfect gift for her sister. Initially reluctant to stay open longer to deal with a window-shopping customer, the shopkeeper (Jeffrey Combs, The Re-Animator) eventually decides to indulge his potential big sale by telling her the stories behind some of the merchandise. It’s a clever framing device for the stories allowing for easy transitions.

Of the four stories, only one really puts any real effort to working in a holidays-focused story. One briefly touches on Hanukkah and the other two don’t touch on the holidays at all. It seems a missed opportunity to play around with a theme that could present interesting stories while overcoming some of the basic storytelling deficiencies. 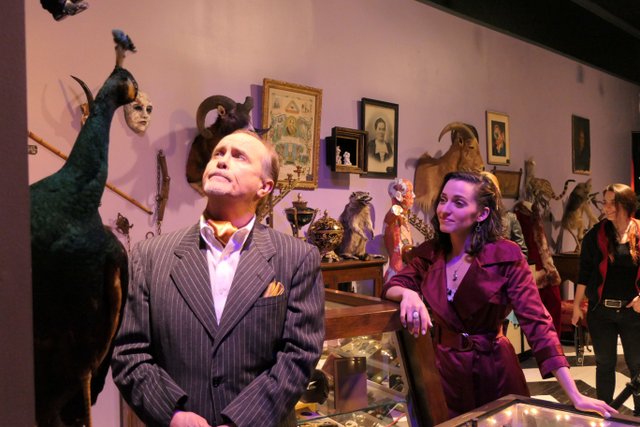 The first focuses on a group of students having a party at a home where a tragedy occurred involving one of the daughters, who was given the cruel nickname Dollface by the neighborhood bullies. Dollface plays out like a classic horror film in a confined space.

Of the shorts, Dollface feels like the one that’s rushed as it seemed the best candidate for a standalone horror film. The story and characters barely get established before they’re getting killed off and the twist doesn’t land as effectively due to the sped-up nature of the story. Director Jeff Vigil has good instincts and sets up the kills well, but it plays out way too quickly.

Jeff Ferrell, who directed the framing sequences, also handled The Hand that Rocks the Dreidel. This is a simple boy (Forrest Campbell) gets a puppet for Hanukkah as his parents head out for a weekend trip and leave him with a terrible babysitter story. Good thing the puppet is capable of handling nasty sitters. This one makes efficient use of the run-time and effectively tells the story. The puppet movements are limited dulling some of the scare, but otherwise this one was fine. 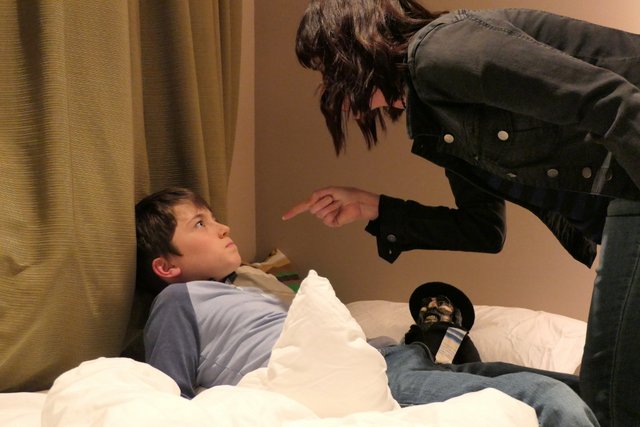 In easily the strongest of the four, David Burns directed Christmas Carnage. Punching bag Chris (Joel Murray, Dharma & Greg) gets screwed out of his promotion and his wife (Ailsa Marshall) isn’t physically interested despite him staying sober for a year and dropping his bad habits. Decked out as Santa Claus for the annual Christmas party, Chris learns a terrible truth and goes on a rampage. Murray does a great job of making Chris a sympathetic loser and his carnage at least feels earned even in a short timeframe.

The final sequence, Room to Let, by Jeremy Berg focuses on Anna, a young woman (McKenna Ralston), who seeks a fresh start and rents a room from a clearly weird couple (Lisa Carswell and Jeffrey Arrington). There’s something wrong in the town and the only question is if Anna can figure it out before it’s too late. This one has the weakest holiday connection and could have been included in any anthology. Berg sets up a nice and ominous tone though and it works very well on that level.

With the stories told it’s time for the payoff for the framing sequences. This played out somewhat convoluted and didn’t deliver a worthwhile conclusion for the buildup despite Combs’ best efforts in setting up the drama.

Holiday Hell really doesn’t do enough to take advantage of its premise with stories that fail to lean in hard enough on the theme. Christmas Carnage is the standout and if that was the norm instead of the exception this anthology film would have been a welcome cinematic stocking stuffer for horror fans.