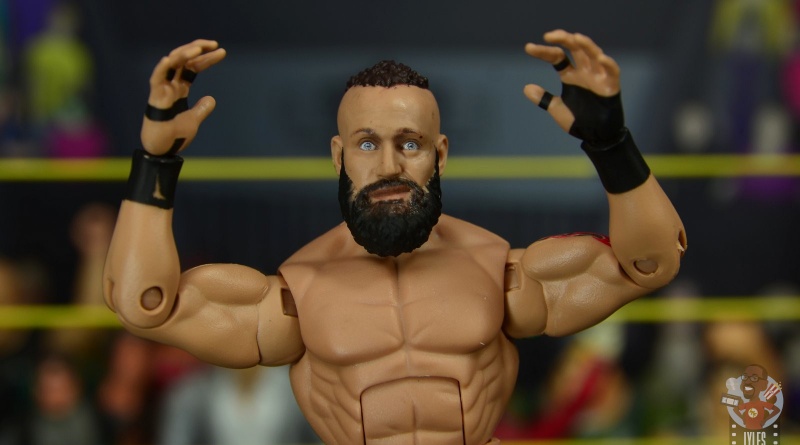 Eric Young has been one of the most versatile wrestlers of the ‘10s. For most of his run he was a staple in TNA/Impact initially as a member of Team Canada before becoming a solo star and eventual world champion.  I didn’t have high hopes when he went to WWE, but he had the good fortune of going to NXT where he was positioned as the leader of the SAnitY faction.

SAnitY was a fun faction and their NXT run was probably cut short as they got called “up” to the main roster where they quickly were disbanded. Fortunately, Mattel made Eric Young from his SAnitY tenure ensuring I keep one of my favorite modern era factions alive and well on my shelf.

Packaging:  I’m a few series behind so I know Mattel has changed the package color scheme, which I always appreciate from them. I was getting a little tired of this white with red accent set up.

As usual, this new gen packaging highlight is the back with the bio and stat breakdown. EY is arranged so you can see all his accessories and check for any obvious paint issues. 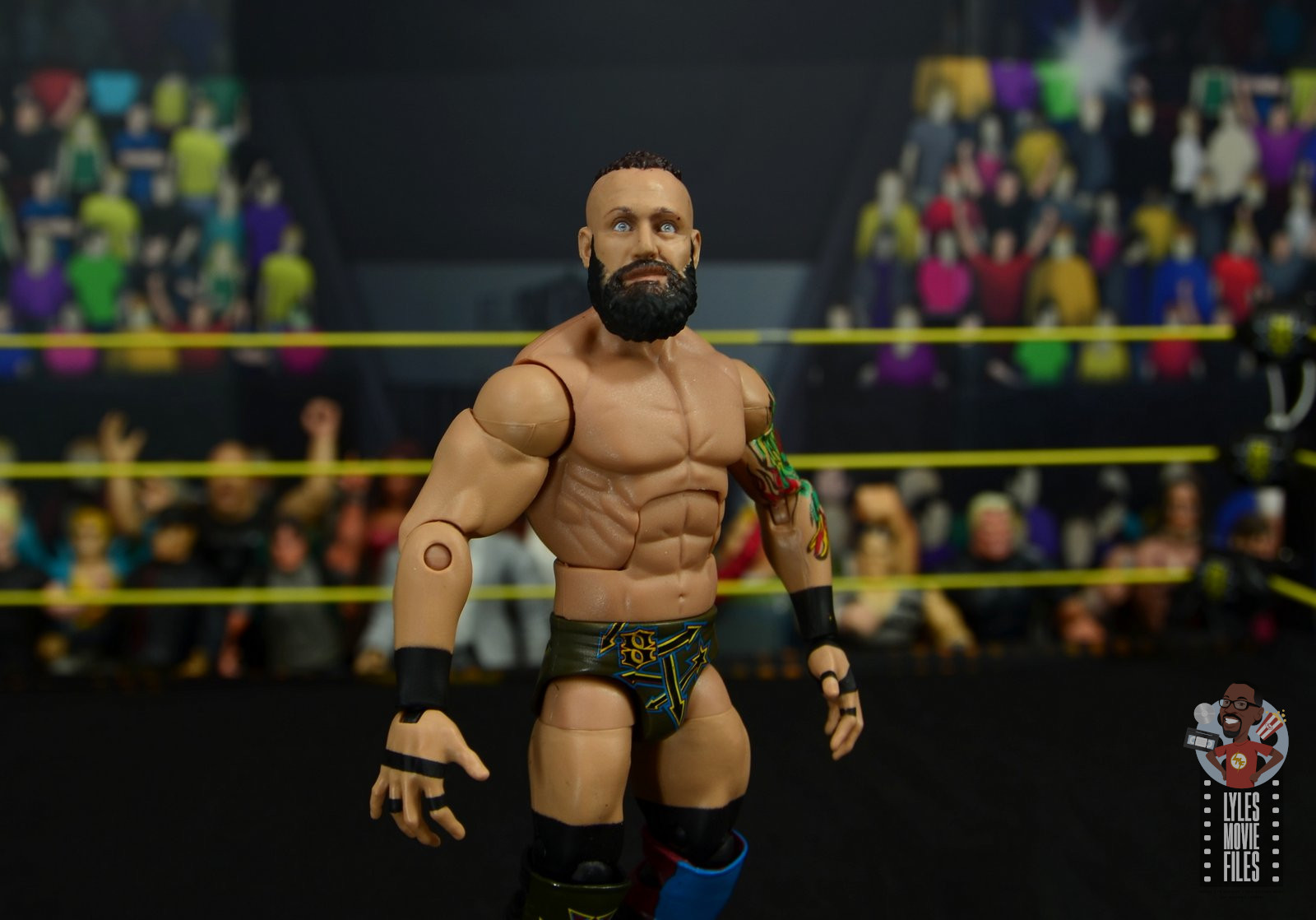 Likeness:  I love how this figure turned out. Mattel nailed Young’s deranged facial expressions and the likeness is spot on. This is the point where Mattel’s facial printing process is doing incredibly lifelike likenesses at this scale.

Mattel also captured Young’s ripped physique as well. Young had an unorthodox attire with his boot flaps down and Mattel went the additional mile to do that as well. That’s appreciated since Young isn’t likely to get several Elite figures so getting it right the first time was important. 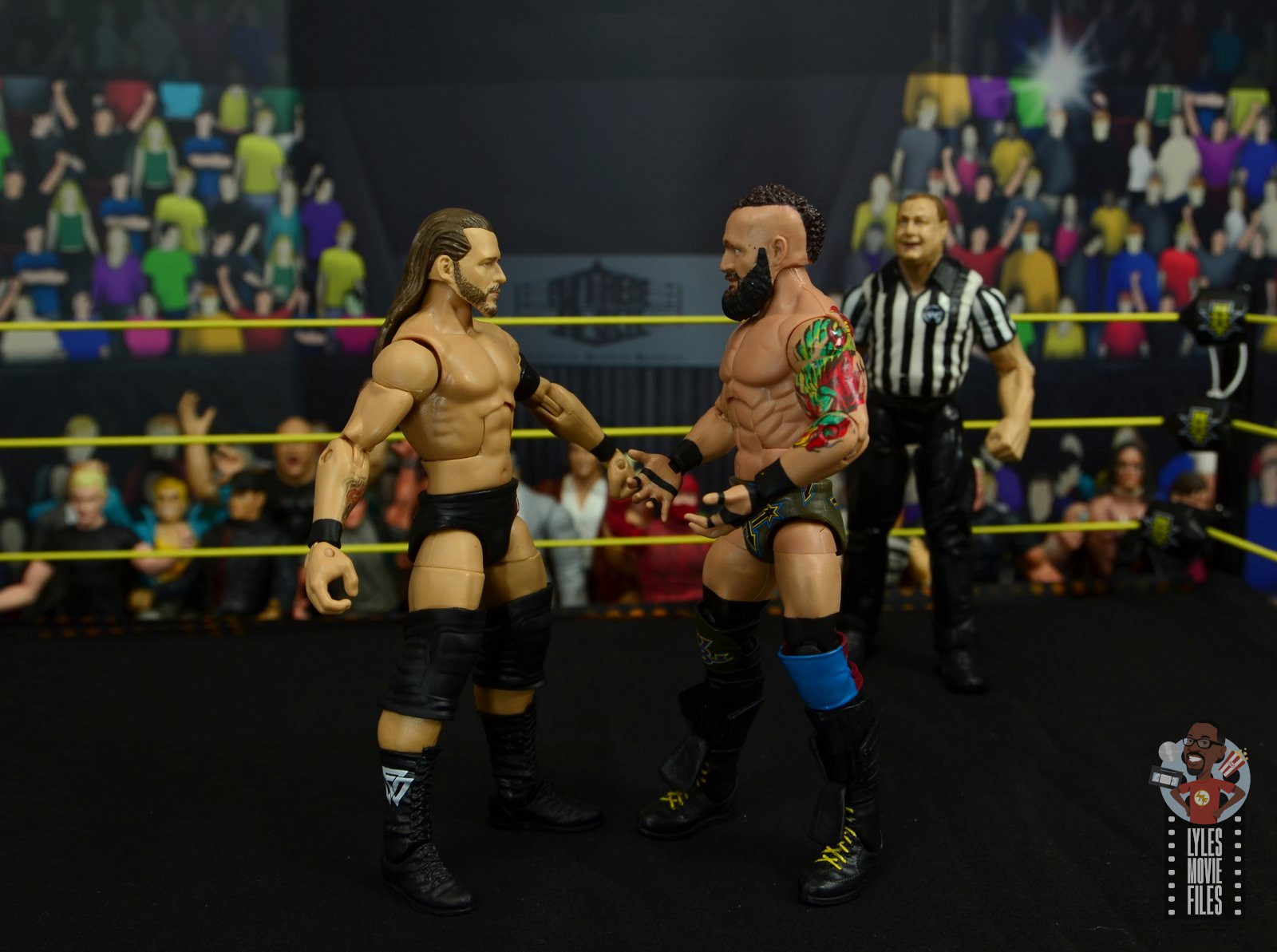 Paint:  EY will be another figure I need to remember for Best Paintjob of 2019. Mattel got his hair color just right, but the most impressive aspect of the figure is the tattoo on his left arm. 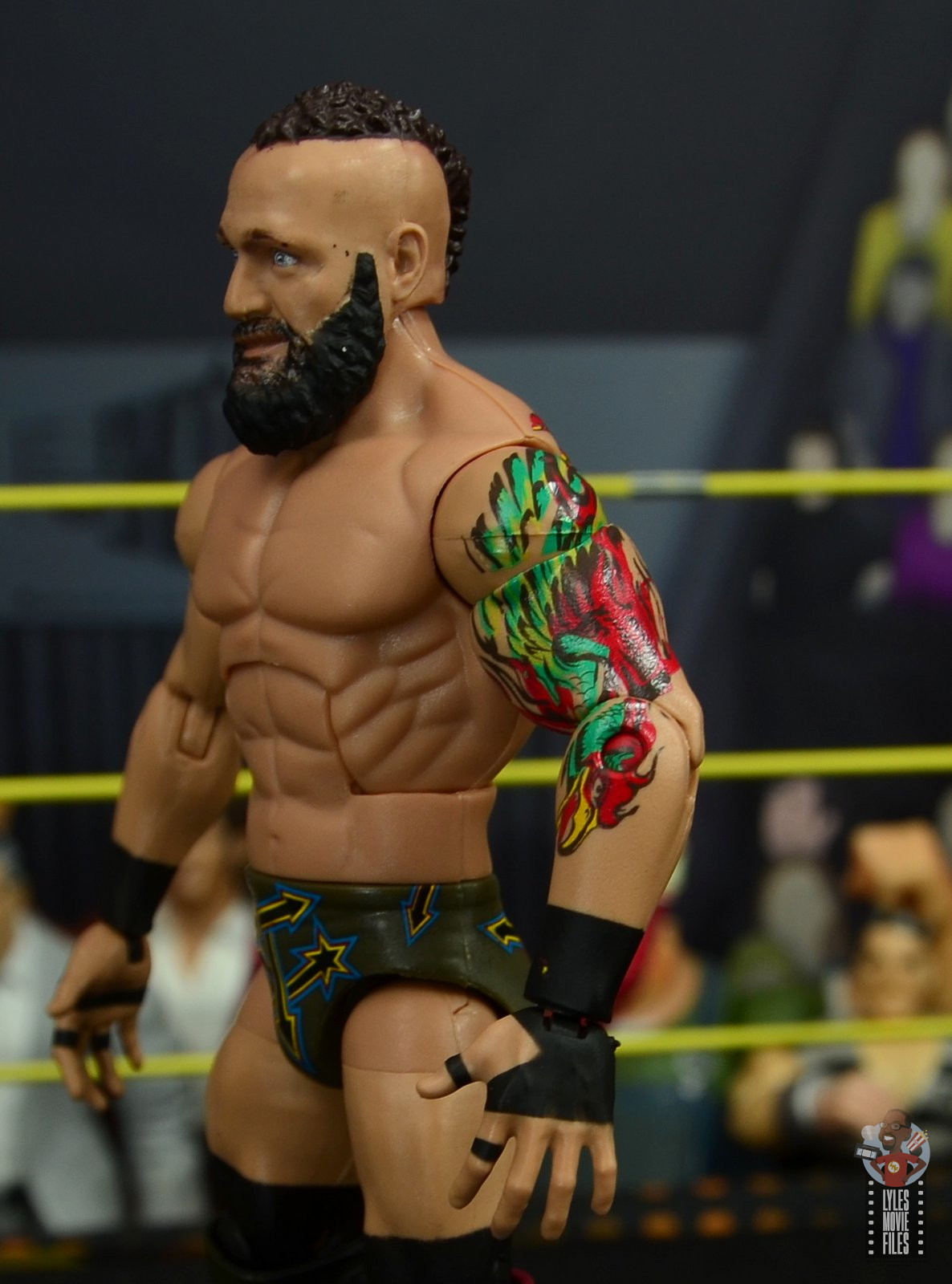 Also check out the intricate work on his tights complete with the SAnitY logo on the back.

I can’t place the look Mattel went for with the right kneepad as most of the pictures I’ve seen just has the SAnitY logo on it. The laces on his boots are also done very well. 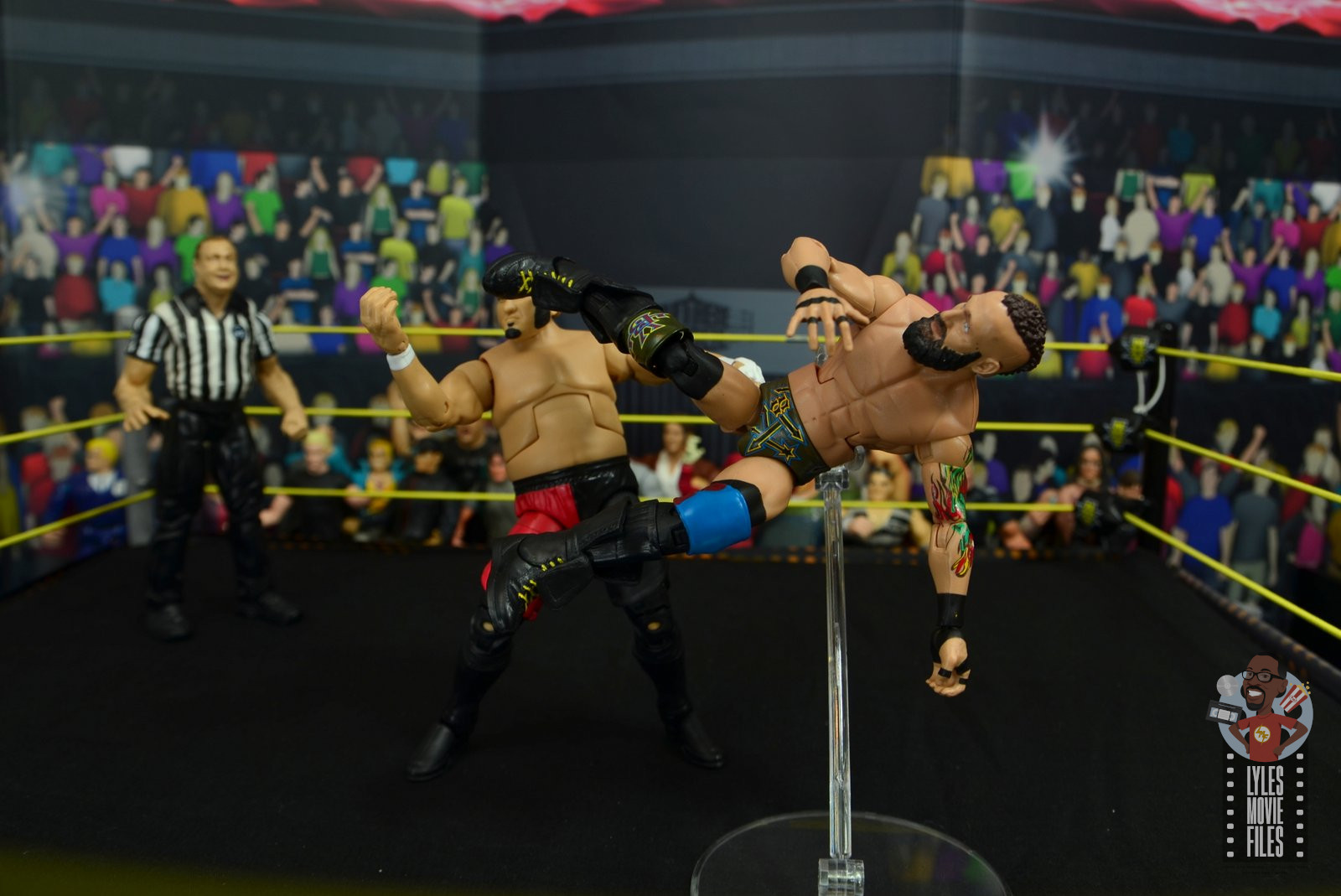 Articulation:  EY is a technical brawler and is capable of going hardcore or out wrestling his opponents so you need him to be able to hit a variety of moves. Fortunately, with this Elite body you won’t have a lot of problems pulling them off. 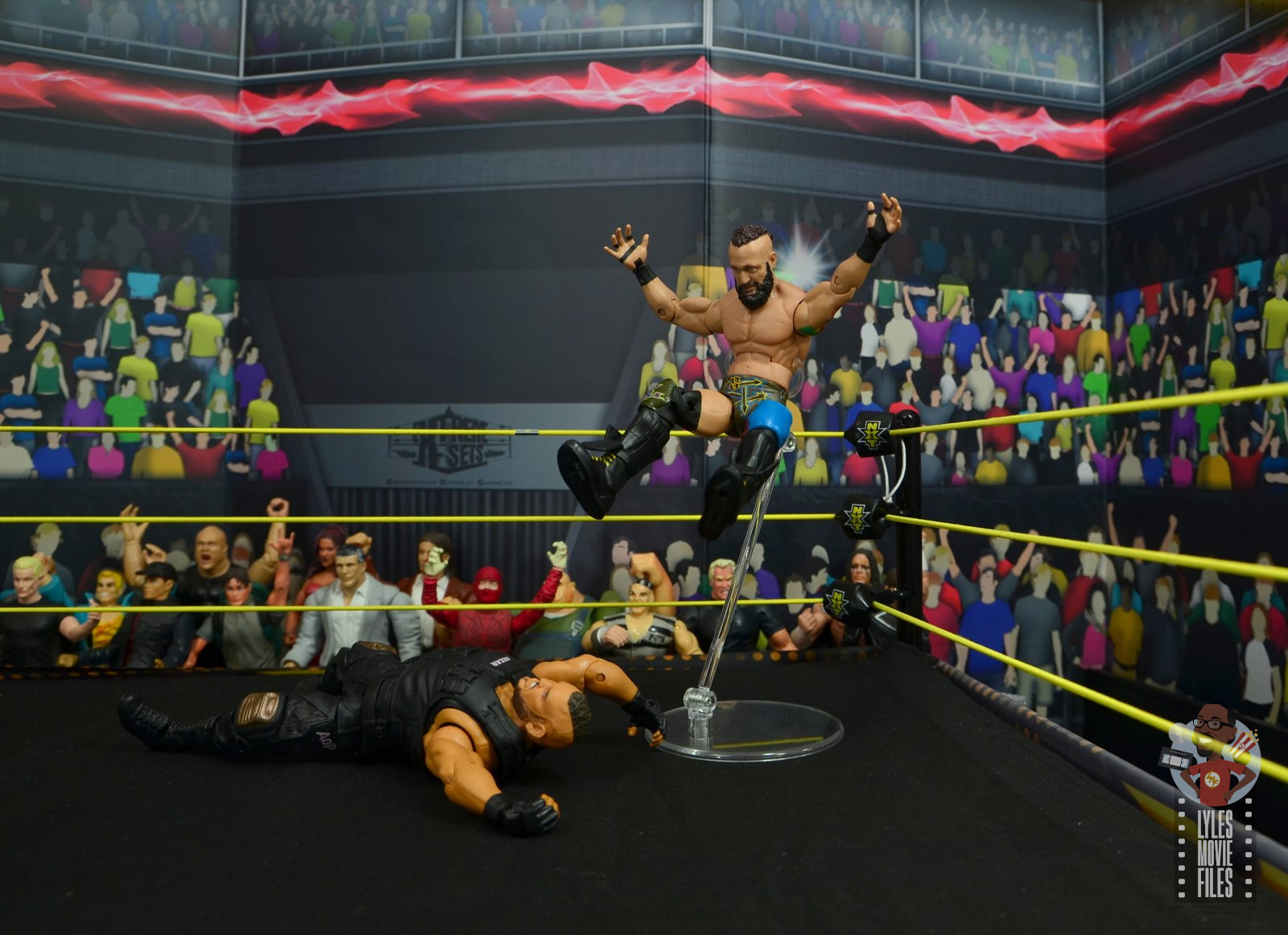 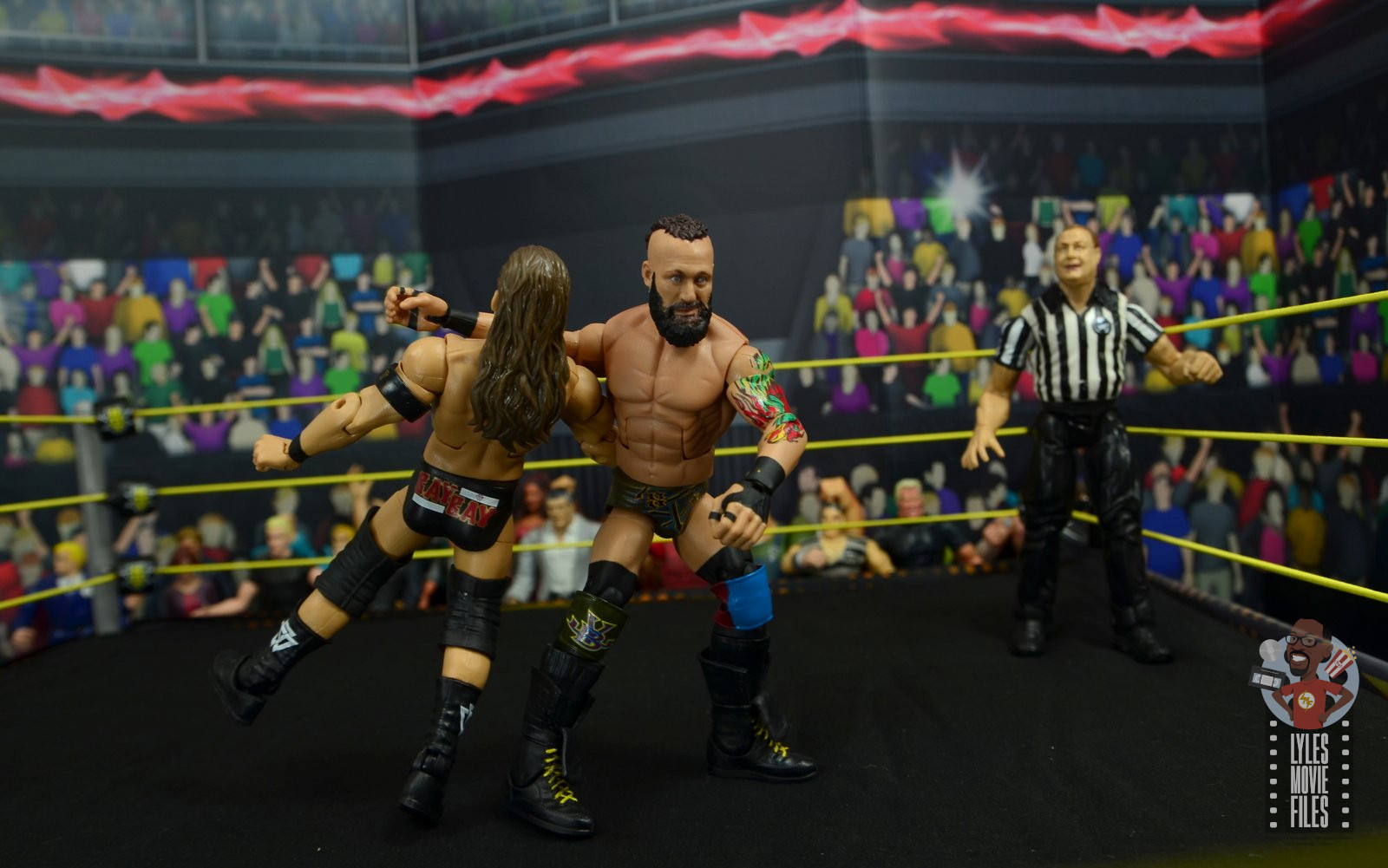 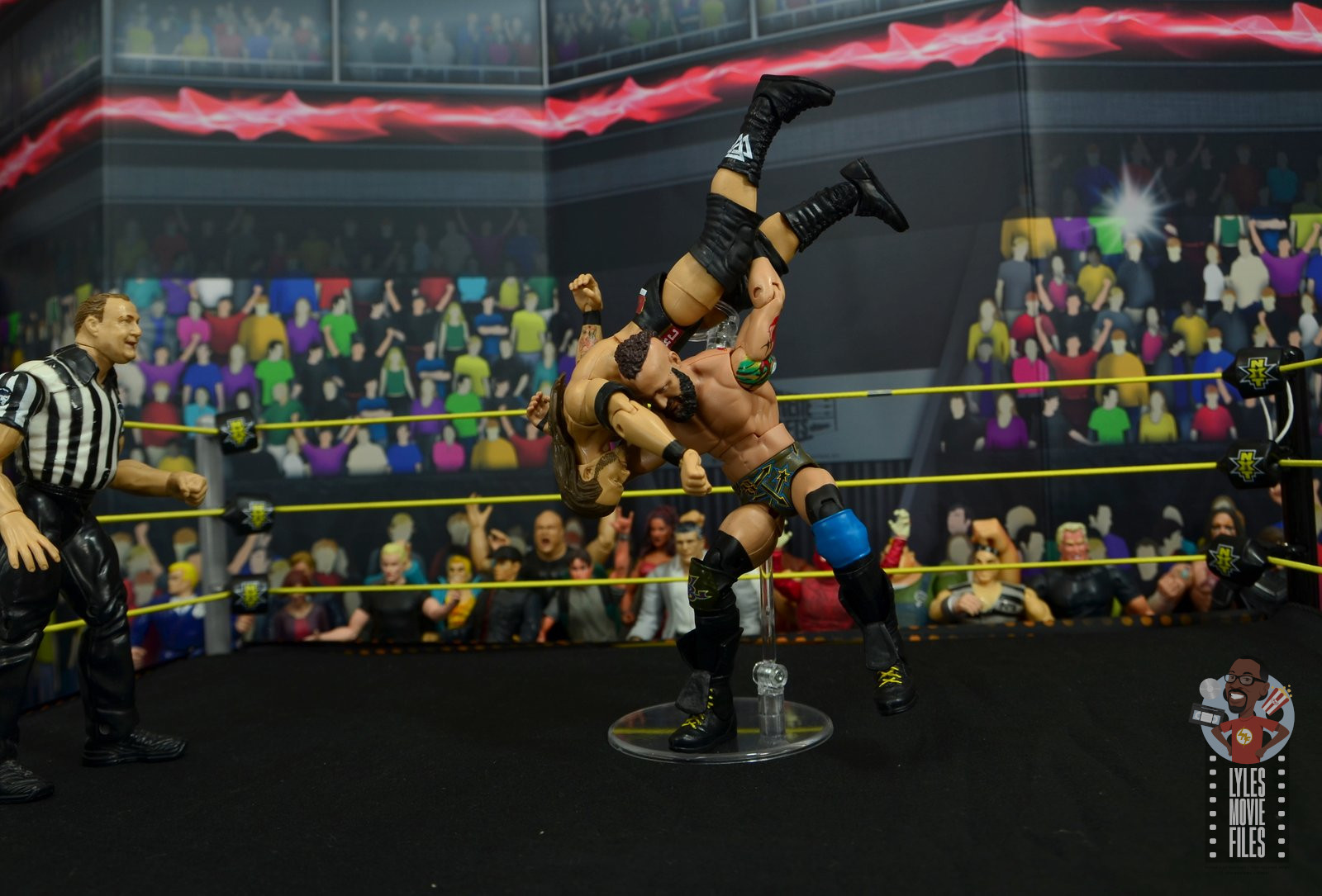 Accessories:  EY comes with his ring entrance gear with his vest with hoodie and mask. The vest is nicely detailed with the various patches replicated well right down to the Canadian flag in the lower left pouch and the usual strong paint job on the back. The mask stays on better than I expected.

Additionally, Young comes with two alternate wide-open hands. That’s a good choice for his second set as it allows you to pose EY in his all-out crazed moments.

Worth it?  At $20, Young was a perfectly reasonably priced Elite figure. If you waited and haven’t gotten him yet you can get an even better price of $13.32 from Amazon. That’s a great deal and even better than the current $14 retail sale price. 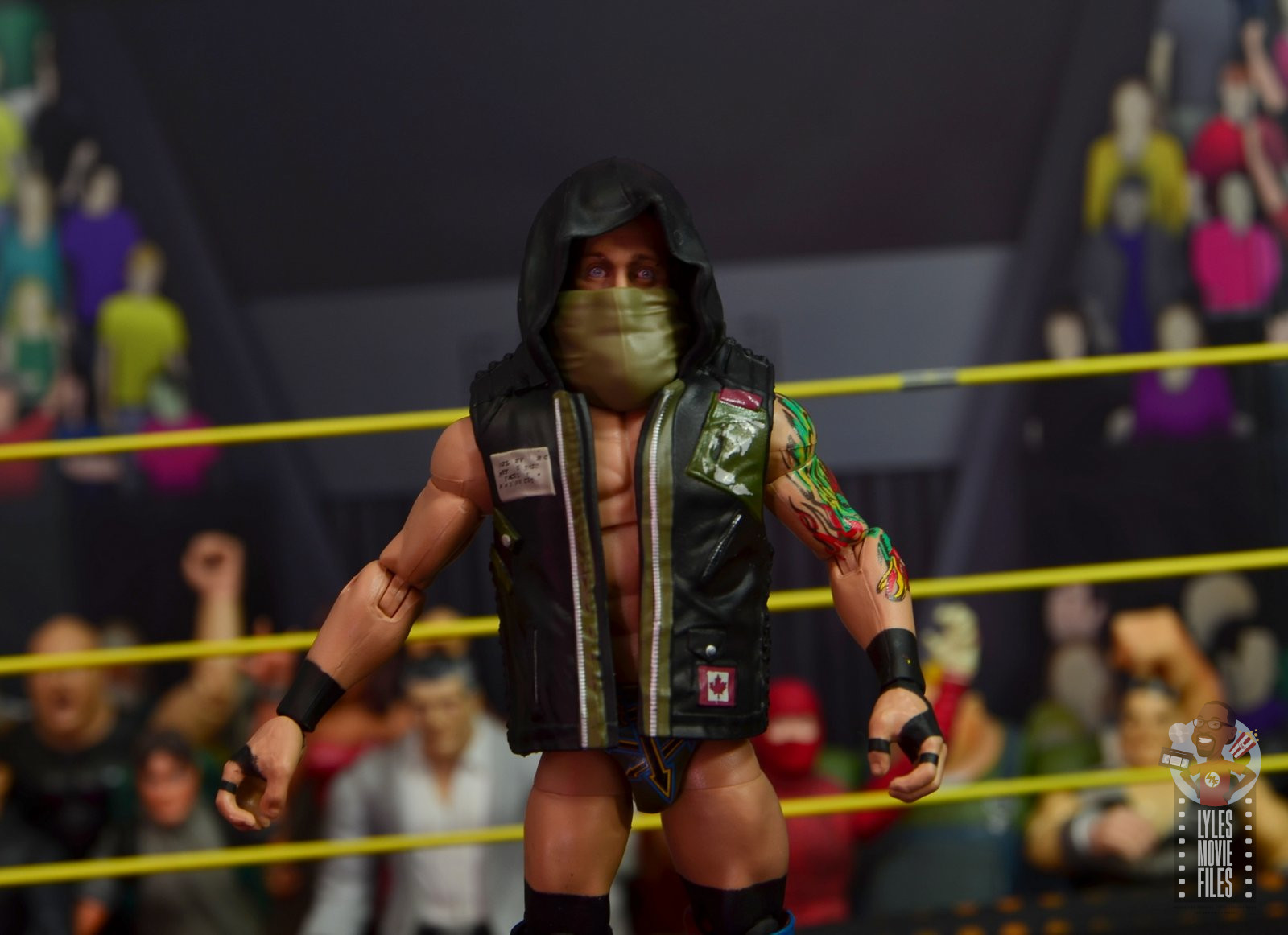 Mattel did an excellent job with this SAnitY version of Eric Young and did right for a guy unlikely to get more Elite figures.

Where to get it?  I got Eric Young from Amazon as the sale price was too good to pass up. You might still be able to find him at retail and price match however.

**As an Amazon Associate I earn from qualifying purchases.