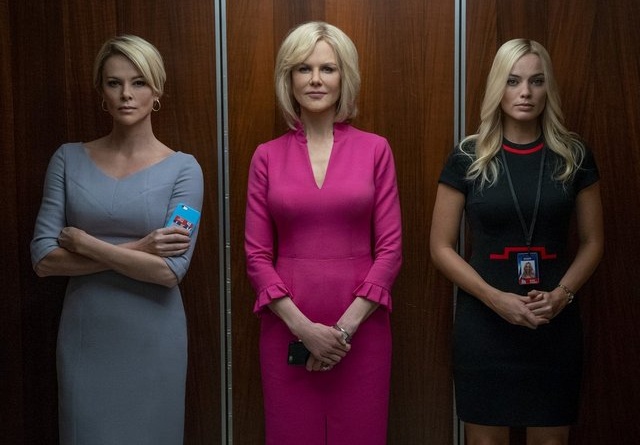 As one of the pretty mouthpieces of Fox News rhetoric, Megyn Kelly doesn’t exactly make for the most sympathetic and endearing lead for a film that will likely have more interest from left-leaning viewers. Bombshell likewise faces an uphill battle in fighting against negative perceptions to cast a different perspective on sexual harassment in the workplace.

To some extent I almost wondered if it wouldn’t have been easier for Director Jay Roach (The Campaign) and screenwriter Charles Randolph to make an original story influenced by the Fox News scandal instead of set in that 2016 period. There likely would have been less “triggering” or accusations of bias if it didn’t immediately start out asking viewers to take their respective side of the aisles. 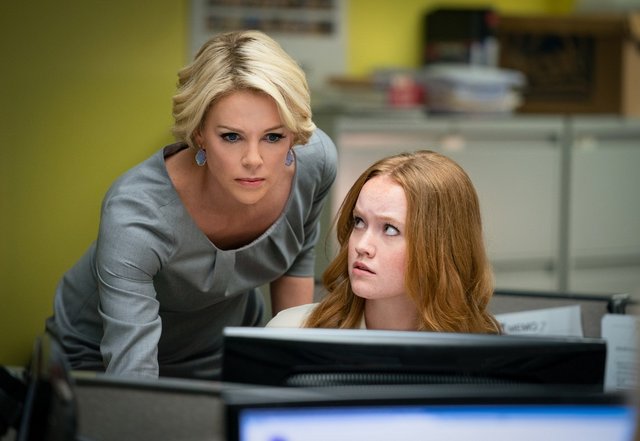 This doesn’t do any favors for the film’s main plot as it allows Bombshell to be written off as liberal propaganda while other viewers, particularly minorities, might not be able to muster up much sympathy for the moment when the wolves turn on themselves. Kelly’s infamous “everyone knows Jesus and Santa are white” line does get included in the film for context. For those willing to go along for the ride, Bombshell is a moderately interesting tale that explores three women and their very different paths to the same destination as sexual harassment survivors.

The first is the self-described non-feminist Kelly (a nearly unrecognizable Charlize Theron, The Fate of the Furious), who finds herself caught in a news story herself as she gets in Trump’s crosshairs during the 2016 presidential campaign. Theron does an amazing Kelly impression and frequently warrants a double take to make sure it’s not a scene using archival news footage of the actual Kelly. 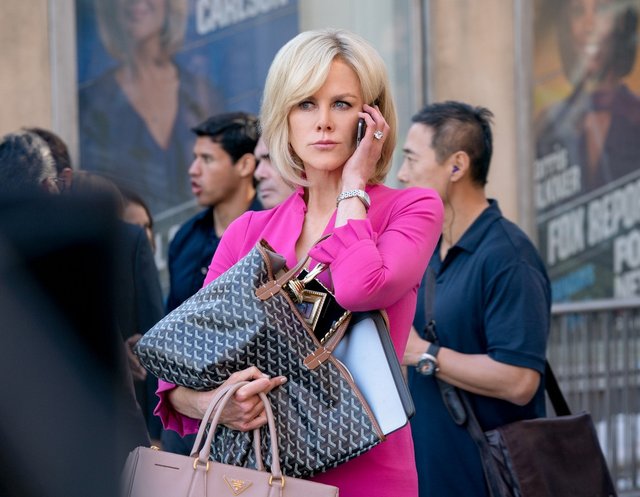 Nicole Kidman (Aquaman) is Gretchen Carlson, the aging anchor who’s becoming more outspoken and less valuable to Ailes as a result. Margot Robbie plays Kayla, a composite character of actual Fox employees. Kayla works her way up the ranks before getting her unforgettable one-on-one encounter with Ailes.

Bombshell almost feels like two movies that don’t entirely line up. One is the glimpse behind the curtain of the almost tyrannical reign of blowhard Roger Ailes (an incredible John Lithgow) and the news media juggernaut he helped create. The other is the fallout of a scandal and the inevitable fall from grace. Older viewers might find Bombshell to be a far more sophisticated take on 9 to 5 with an equally comical buffoon getting his comeuppance.

The tone of the film drastically shifts midway through as the accusations and allegations ramp up. Roach ditches the playful tricks like the character narrator, comedic cutaways and gimmicks like the FOX News logo appearing after a character mentions it’s burned in their parents’ TV.

Randolph is more successful showing the dynamics involved in a sexual harassment scandal with the loyalists turning a blind eye to increasing evidence, the crusaders who want to see justice and those caught in the middle unwilling to choose sides. 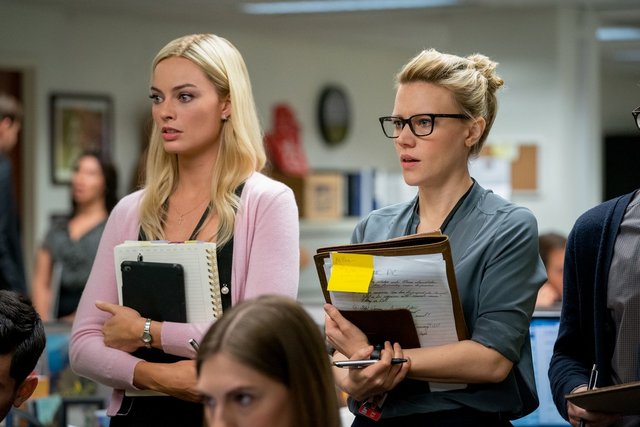 The tricky aspect of the script is Randolph goes for the big sweeping moments giving Lithgow great showy material while slighting Ailes’ victims to a larger degree. In the second act, Kelly is basically cast as an investigative reporter tracking down sources. It did raise the question of how a woman screenwriter would have explored the scandal. The Ailes’ take down and reactions might not have been given as much attention. An interesting subplot that could have used more time is Kate McKinnon’s character, Jess Carr, a closeted lesbian Democrat working at Fox. The dichotomy of ideals is one of the more fascinating aspects of the film.

The film missed its ideal release window at the peak of the #MeToo movement and as a result doesn’t feel like it offers any fresh revelations. FOX News fostered a toxic, sexist work environment; Ailes hired attractive female anchors and sexualized them with short skirts and cleavage friendly tops. Randolph also doesn’t adequately address the issue of why so many women would happily work in such an awful place even before the sexual harassment scandal is mentioned.

Bombshell covers the bases of the Ailes’ scandal, but fails to fully dig deep enough in following its principal characters to feel especially rewarding. Roach also missed what seemed like the ideal ironic ending with the end of some of Fox’s big players as Trump’s ascension begins. Instead, we’re offered a more optimistic ending that maybe things are really changing for women in the workplace.