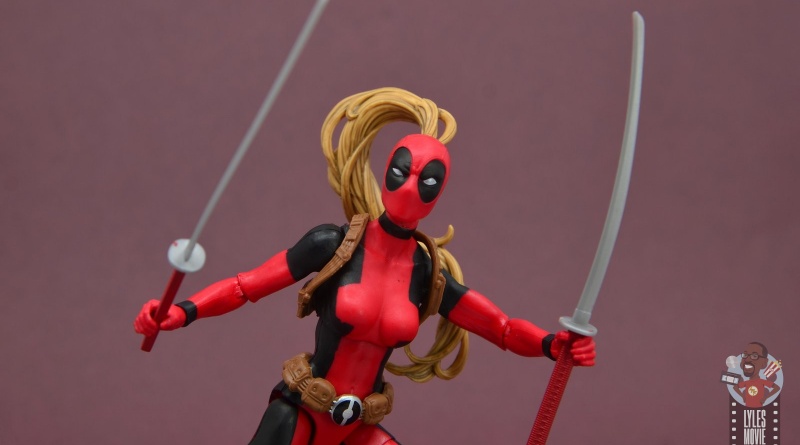 We’re finally at the home stretch of the Build-A-Figure Sauron wave and one final Deadpool variant — Lady Deadpool. I haven’t read one issue with her, but a quick Google read-through reveals an interesting backstory. At least she’s not another Wade Wilson figure. Capitalizing on Deadpool’s popularity, Hasbro decided this was the best opportunity to release a Marvel Legends Lady Deadpool figure. Let’s see if she’s a cut above the other Deadpool variants.

Packaging:  Lady Deadpool isn’t packaged as fun as the other two Deadpool variants in this wave. This is more of the traditional packaging. The side portrait shows her in action and the bio is written in snarky Deadpool style. 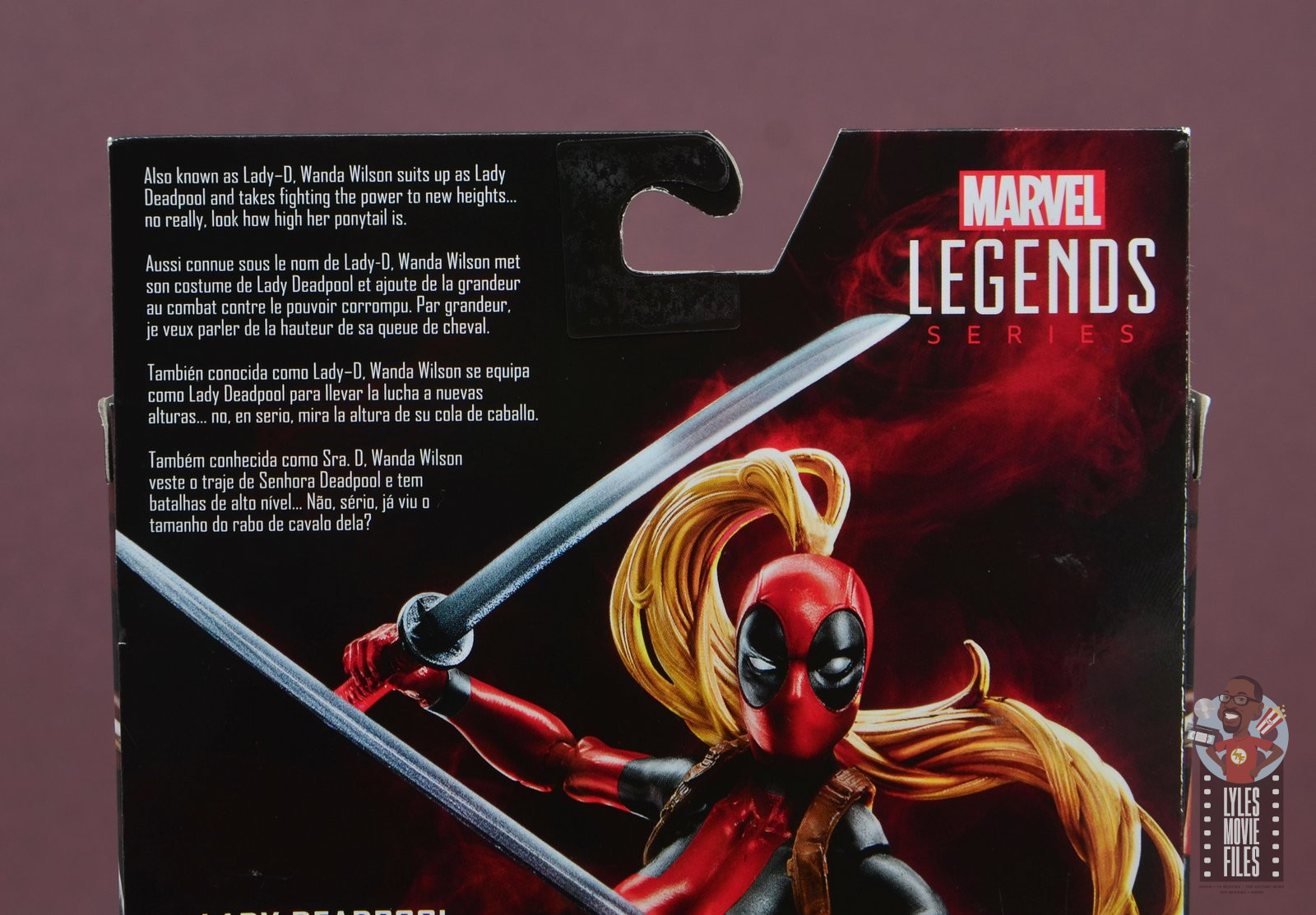 Likeness:  Lady Deadpool is a female version of Deadpool and this figure reflects that just fine. It’s a little weird as the headsculpt looks like a standard Deadpool head with a big ponytail attached. The ponytail is arranged in a dynamic way as if she’s moving. That’s a smart choice so it’s obvious from various angles. 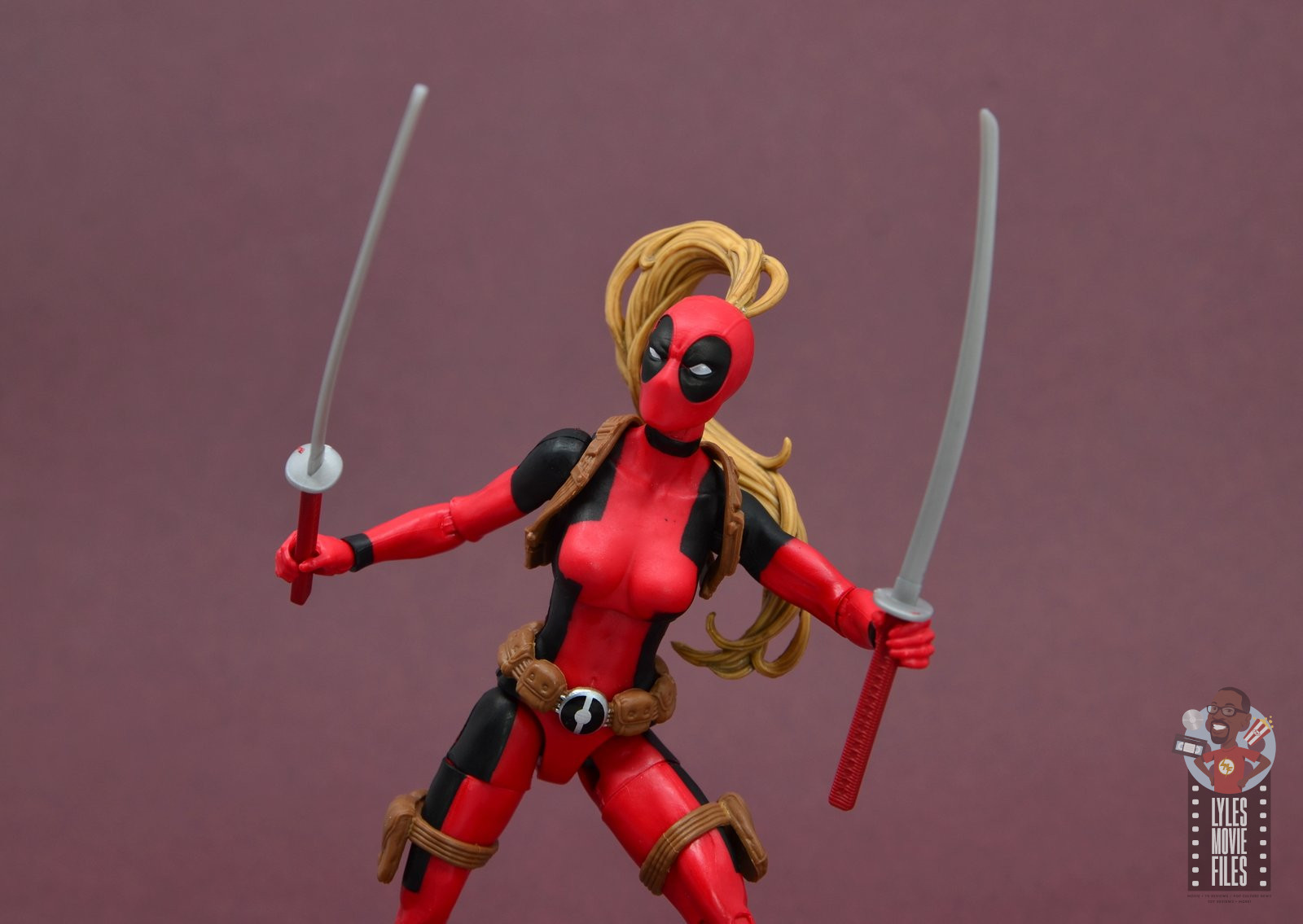 Beyond that Lady Deadpool is a basic blank female buck with a harness, belt and straps on the thighs. It’s not the most exciting sculpt, but it’s all that’s required here. 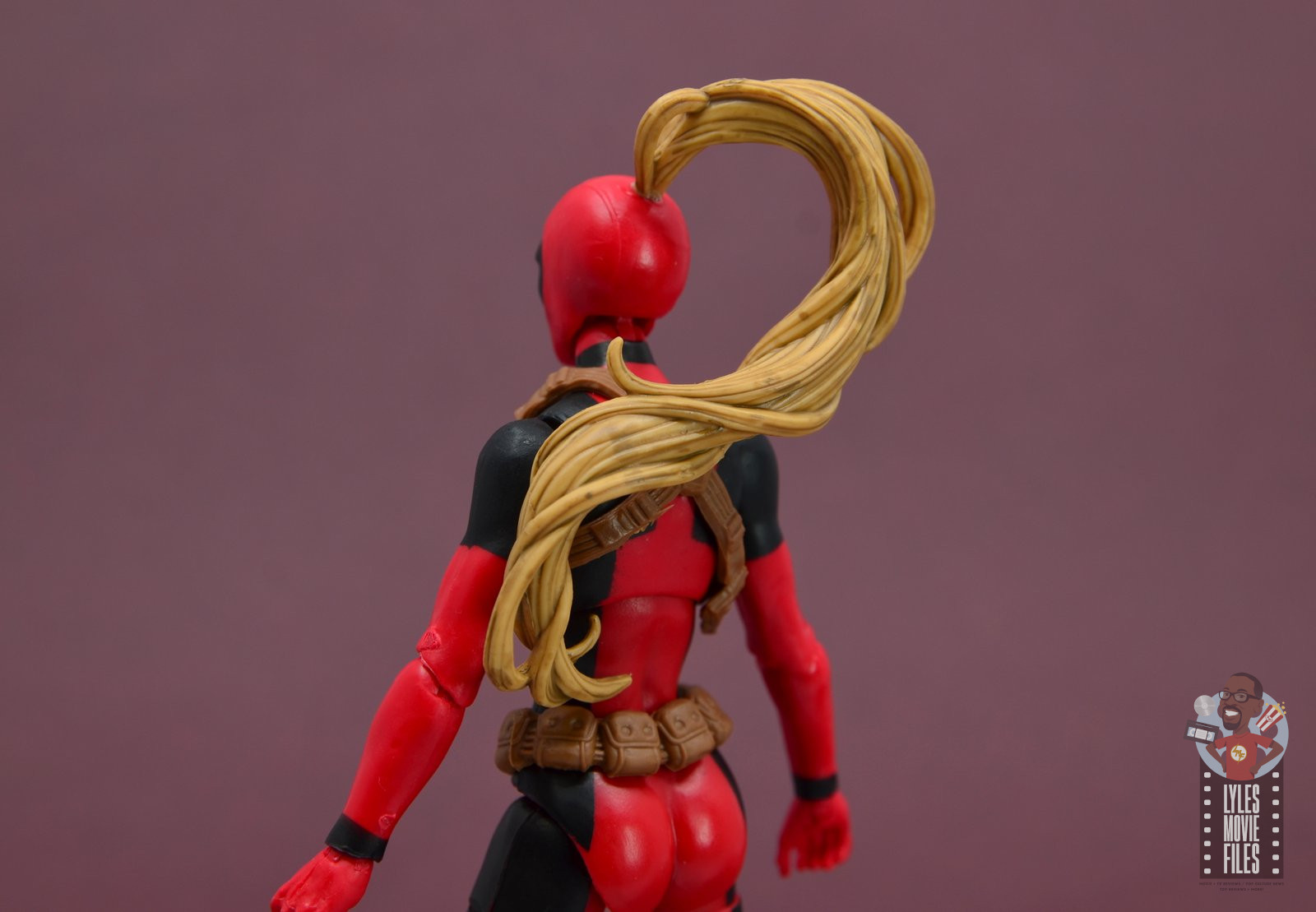 Scale:  Lady Deadpool is a regular size female figure that gains a little extra height from the ponytail.

Paint:  Given all the practice Hasbro has had with Deadpool figures, I wasn’t surprised there’s no issue with the outfit pattern on Lady Deadpool.  There’s no sloppy line work and the head sculpt is painted crisply. The pouches would have benefited from a wash so they don’t look so flat, but that’s about it. Hasbro did add a wash to her hair, which came out great.

Articulation:  As usual, I wish Hasbro would include bicep articulation and double jointed elbows for the female figures. Beyond that, Lady Deadpool features more than enough articulation to come up with some dynamic and creative poses. 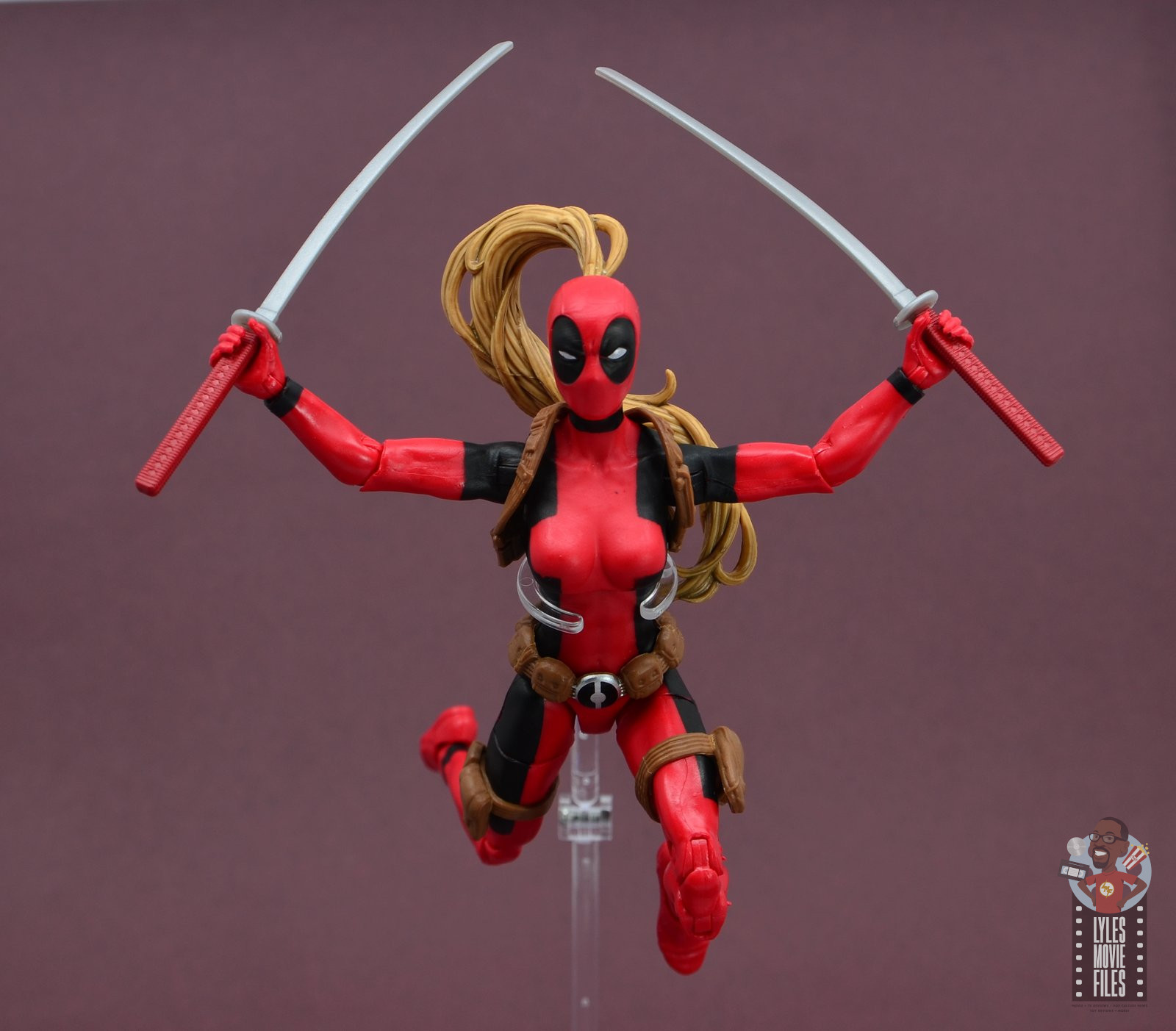 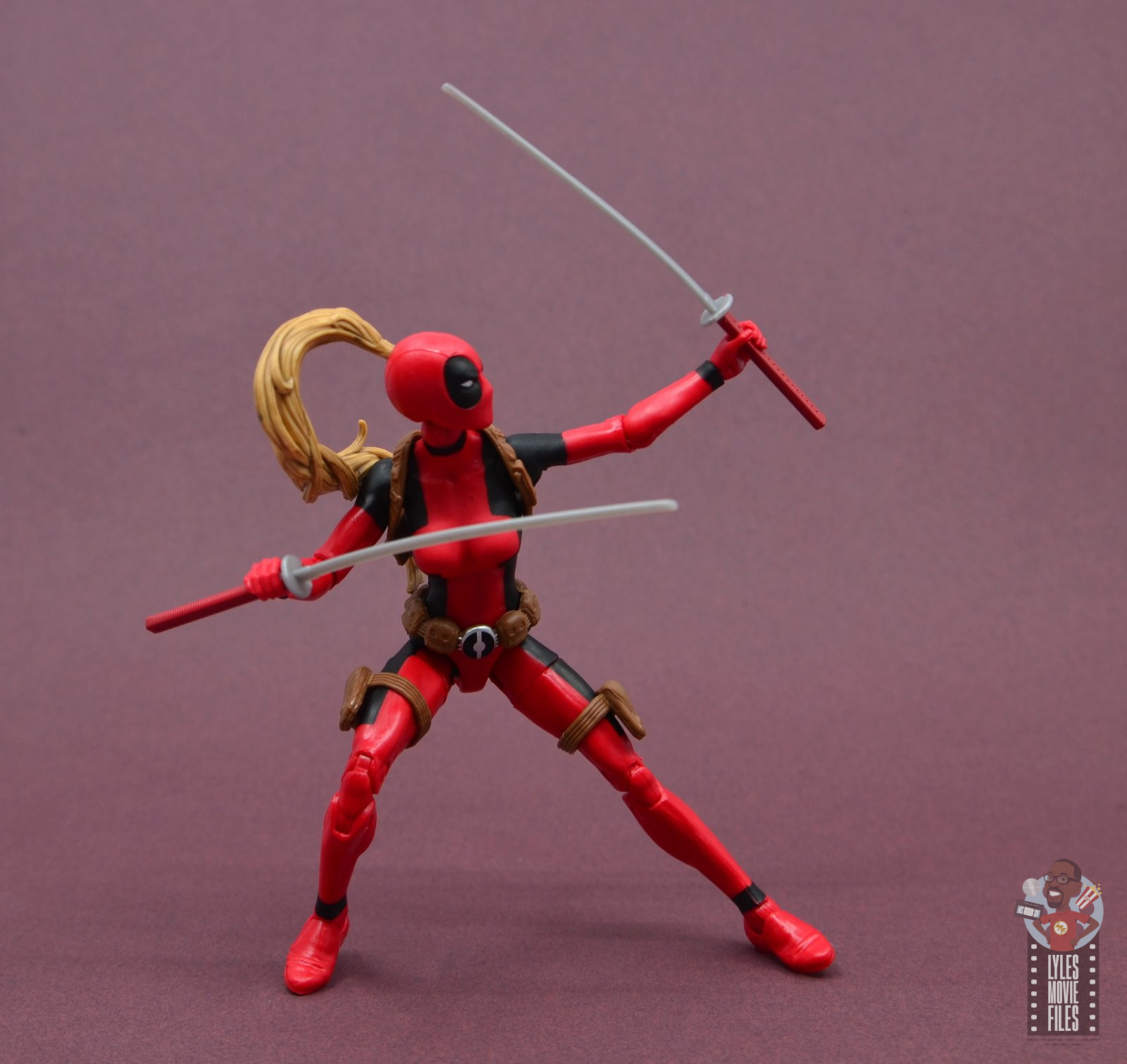 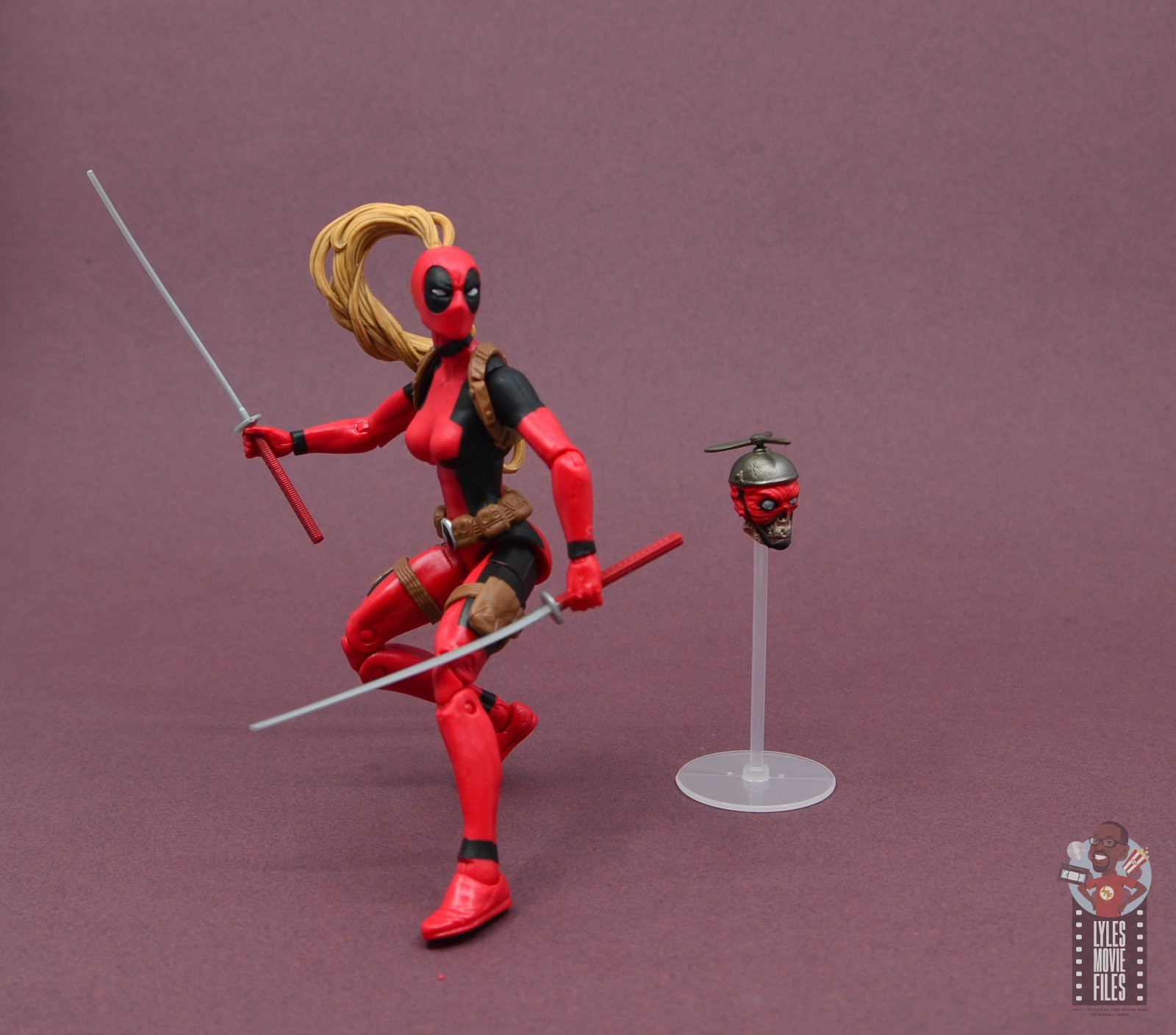 Accessories:  Apparently Lady Deadpool is more of a melee fighter as opposed to Wade as she just uses two katanas instead of any gun at her disposal. This is the same katanas we’ve previously seen with the Liefeld-era Deadpool figure. The hilt is cast in red plastic, which looks good. 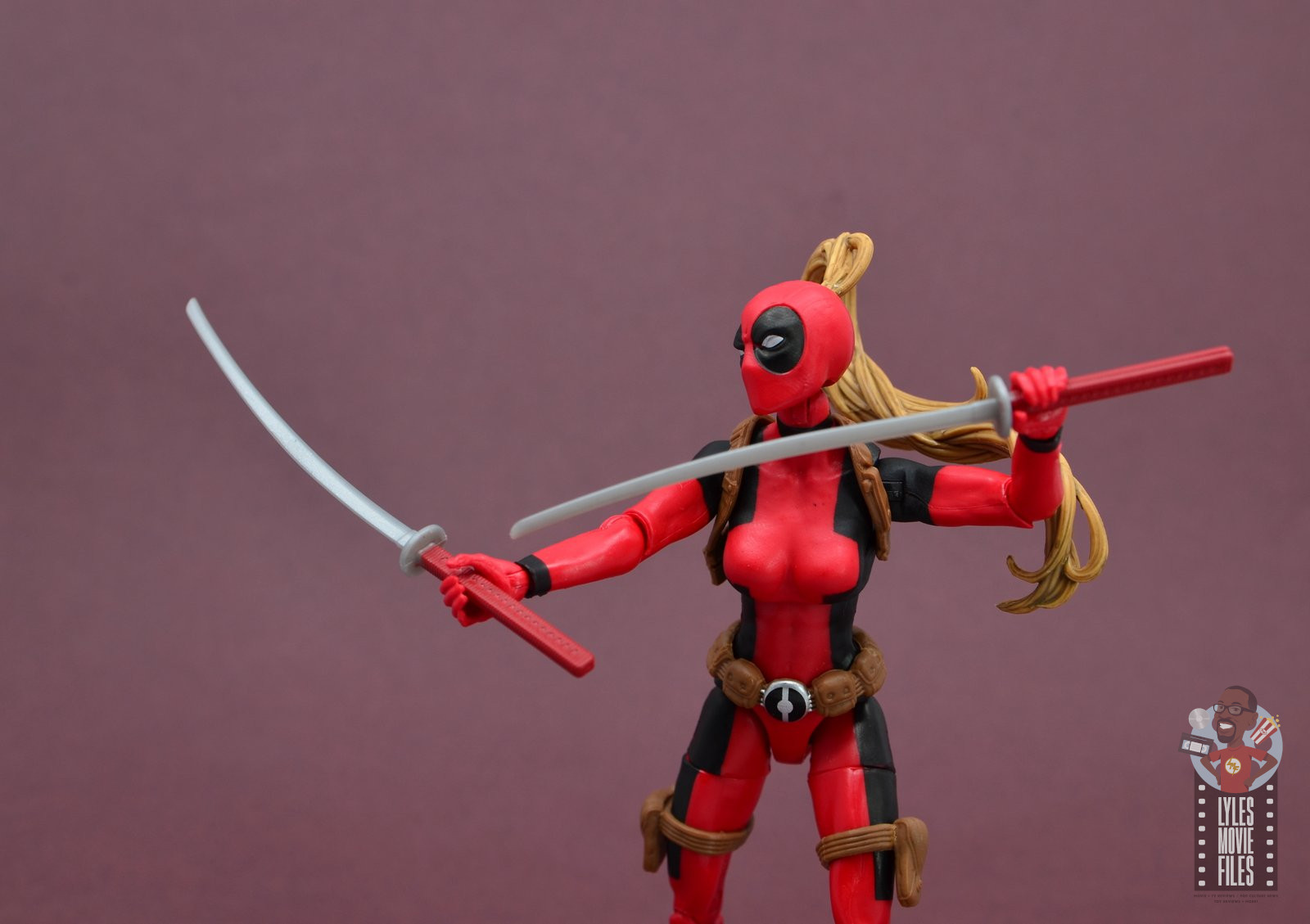 Her other accessory is Headpool another member of the Deadpool Corps. Again, I’ve got no clue about this guy, but it’s a terrific add-on with amazing sculpting and a propeller cap to get around.

Finally, Lady Deadpool comes with the right leg of the BAF Sauron. 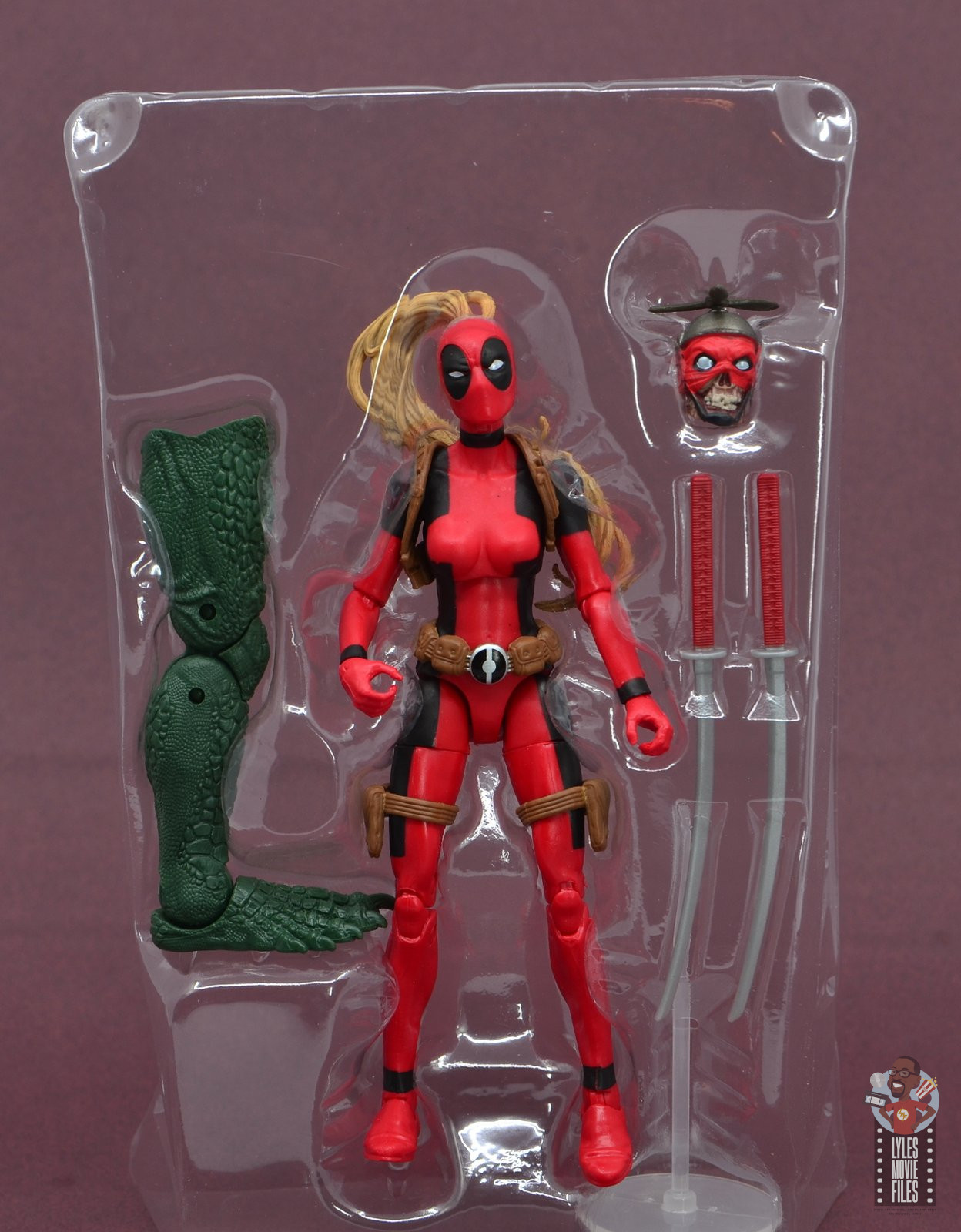 Worth it?  I found Lady Deadpool for $18. Ideally, I would have gotten her closer to $15 and Headpool is probably worth $3 so it works out.

I’m not sure I *needed* Lady Deadpool, but it’s a cool addition to the growing Deadpool wing and Hasbro executed it nicely. 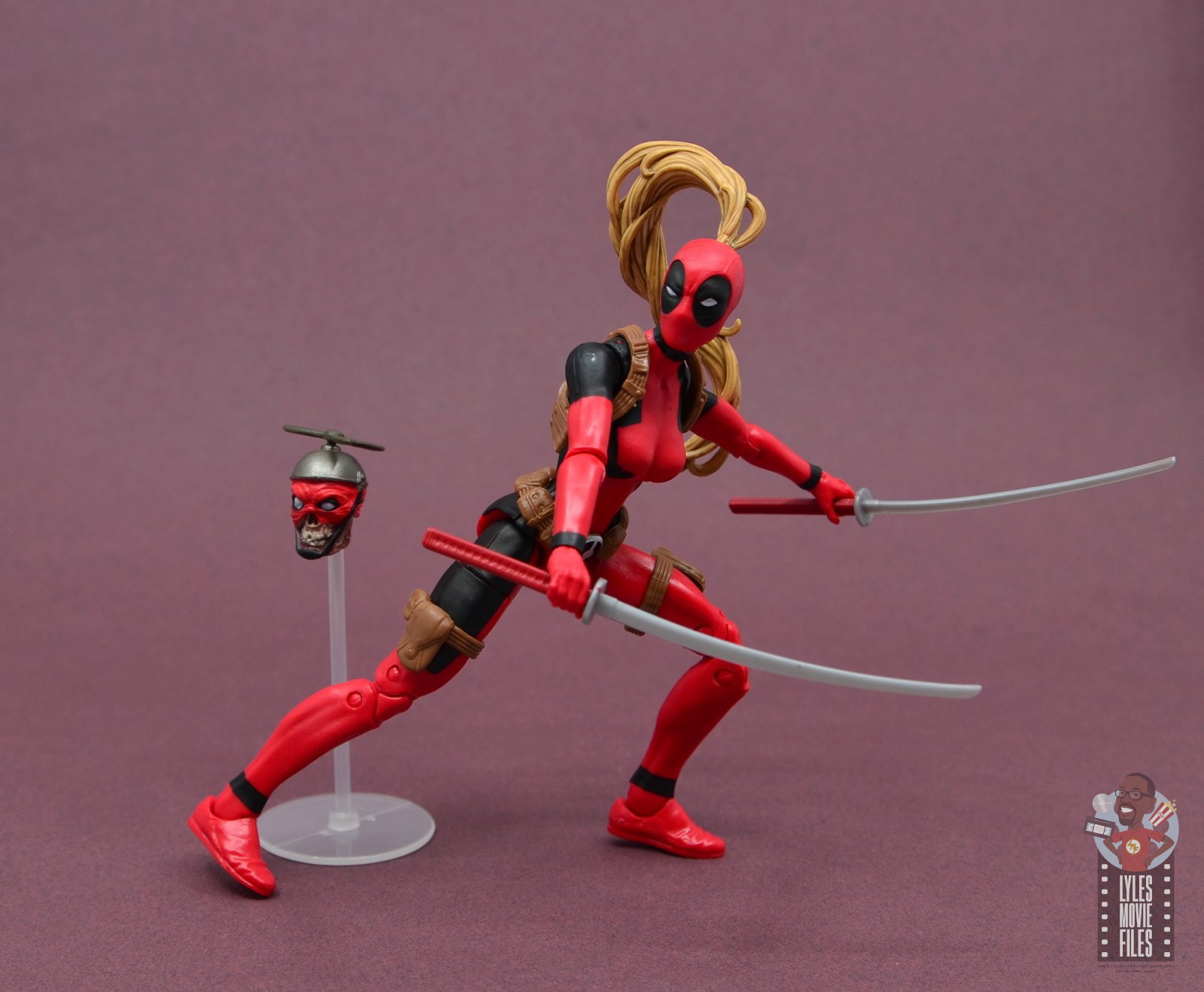 Where to get it?  Gamestop and FYE are proving to be my best options for Marvel Legends these days. You can also find Lady D at Amazon.com for a bit less than the normal retail price.