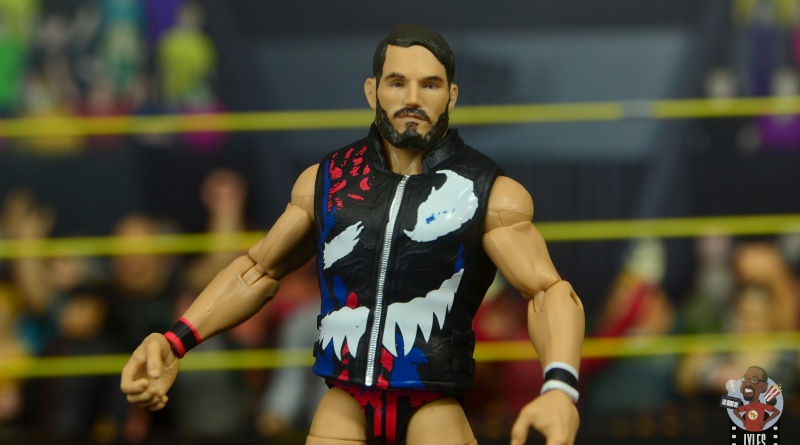 Thanks to his unmatched streak of appearances on the black and gold brand, Johnny Gargano has earned the nickname of Mr. TakeOver. With his tendency to rock comic book influenced attires, Gargano is an ideal character to be in a constant rotation in the Elite line, but the Elite 70 version marks his first entry in the main line. Let’s see if this figure will shine in the spotlight as well.

Packaging:  Elite 70 marks the near conclusion of the packaging with the white with red accent color scheme.

The blue backdrop insert helps to make the figure stand out nicely. I still like the back stat layout and bio setup, which is clean and provides a good amount of info in a short space.

Likeness:  Mattel already knocked out a decent likeness of Gargano with the NXT release, but it looked too much like a mannequin. This figure has the intensity the first figure lacked. 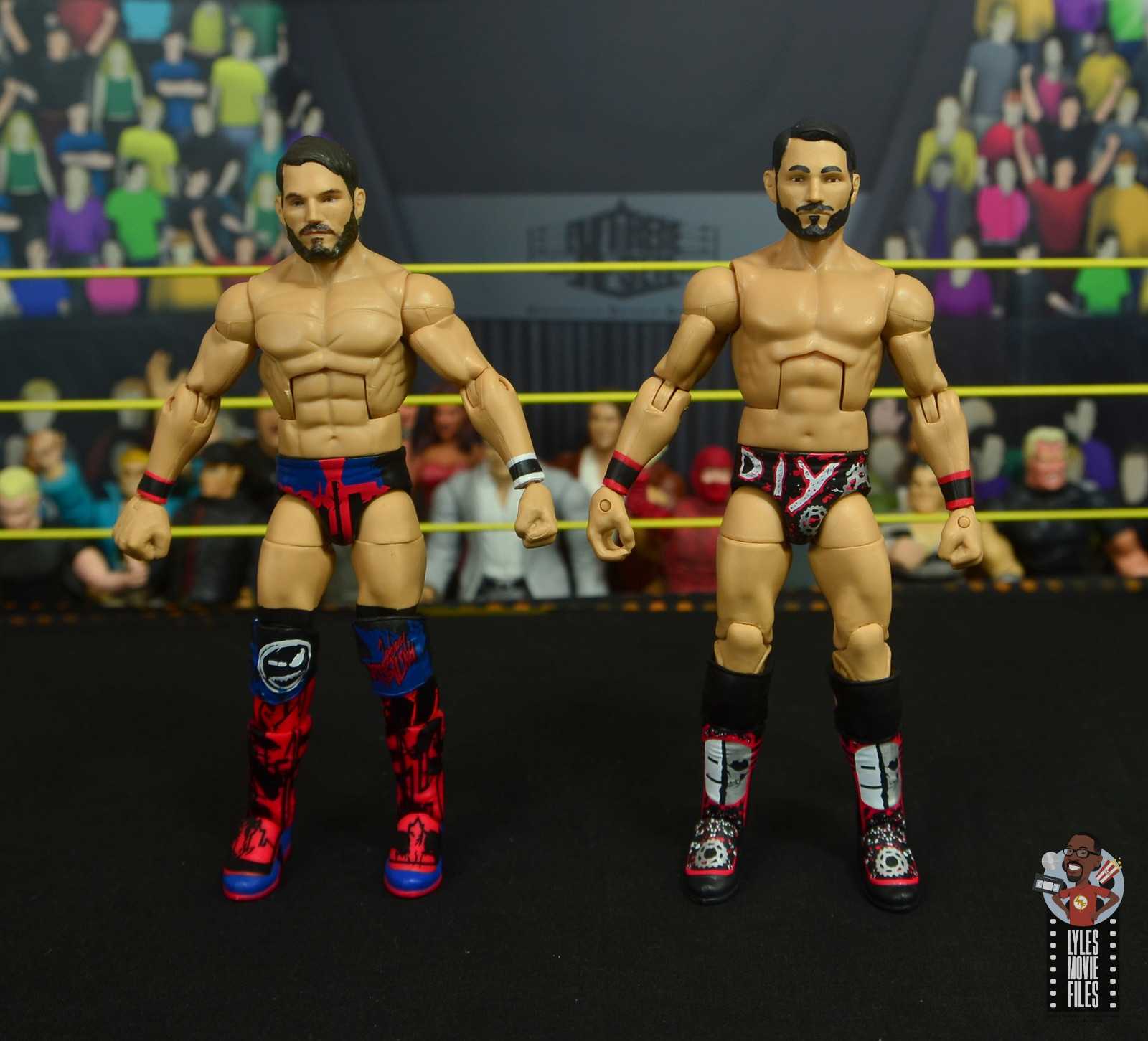 Gargano wears high boots that come up to his knee pads. He’s the kind of character that could have a new release every 2-3 waves so it’s frustrating that Mattel won’t get his gear right. 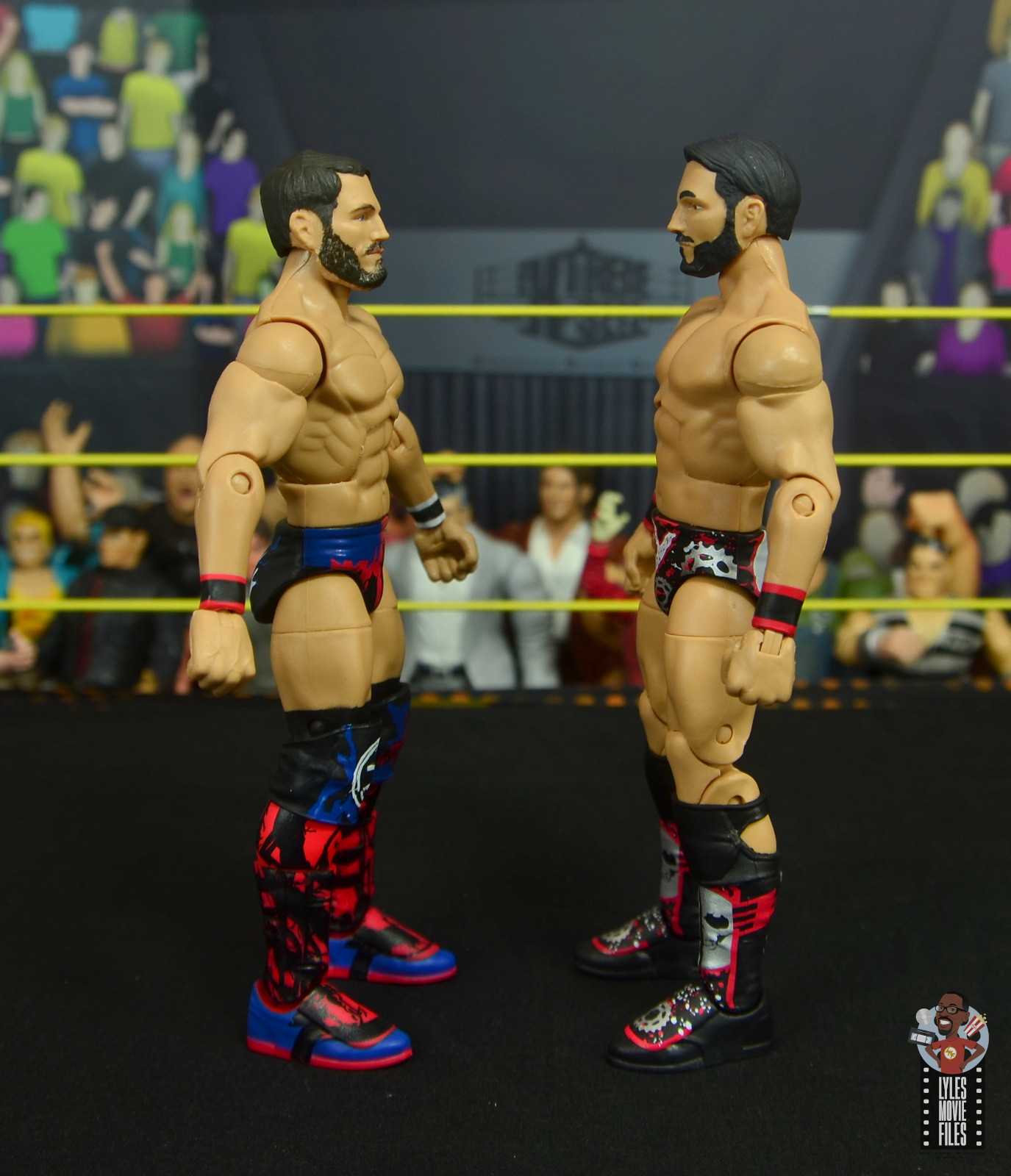 Mattel is settling on the standard setup with knee pads and regular size boots. It creates a weird look as Mattel tries to fix the problem with the paint job. 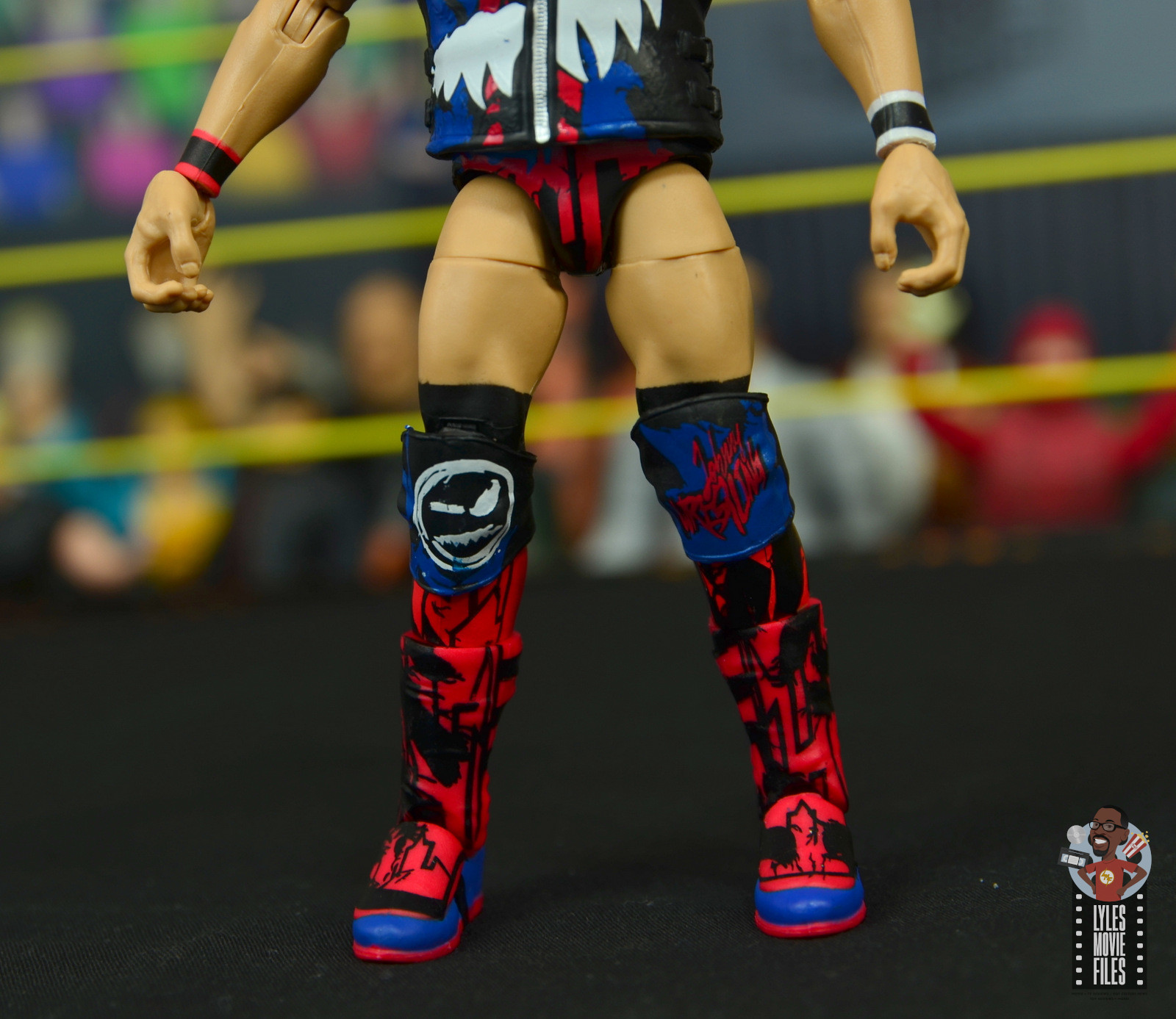 Scale:  Gargano is 5’10” and one of the shorter members of the three brands. He should be looking up at the 5’11” Tomasso Ciampa and 6’ Adam Cole.

The Ciampa figure has a stunted combination of parts that makes him look much shorter and he definitely should be taller than Gargano, who is scaled properly. 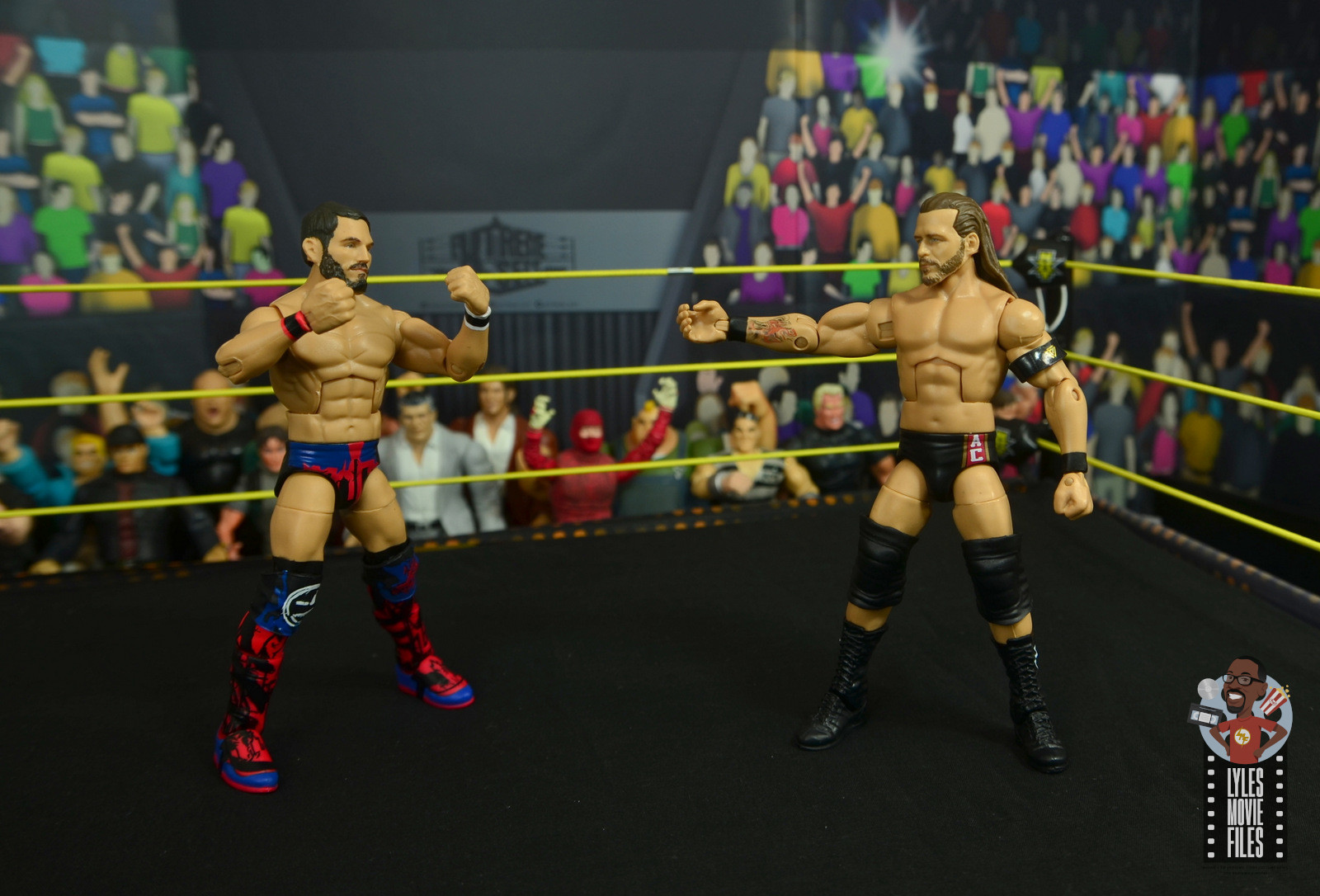 Paint:  For the Elite 70 figure Gargano is in his TakeOver Brooklyn attire with his Venom inspired gear.

As usual, Mattel did an excellent job with the paint job, which is one of Gargano’s more intricate attires. The splatter effect looks sharp and his Johnny Wrestling tampo and logo came out great.

Like I mentioned before, Gargano’s knee and boot area should have a very small gap. Painting the shin area to match the boots looks bad and drastically takes away from the aesthetics. 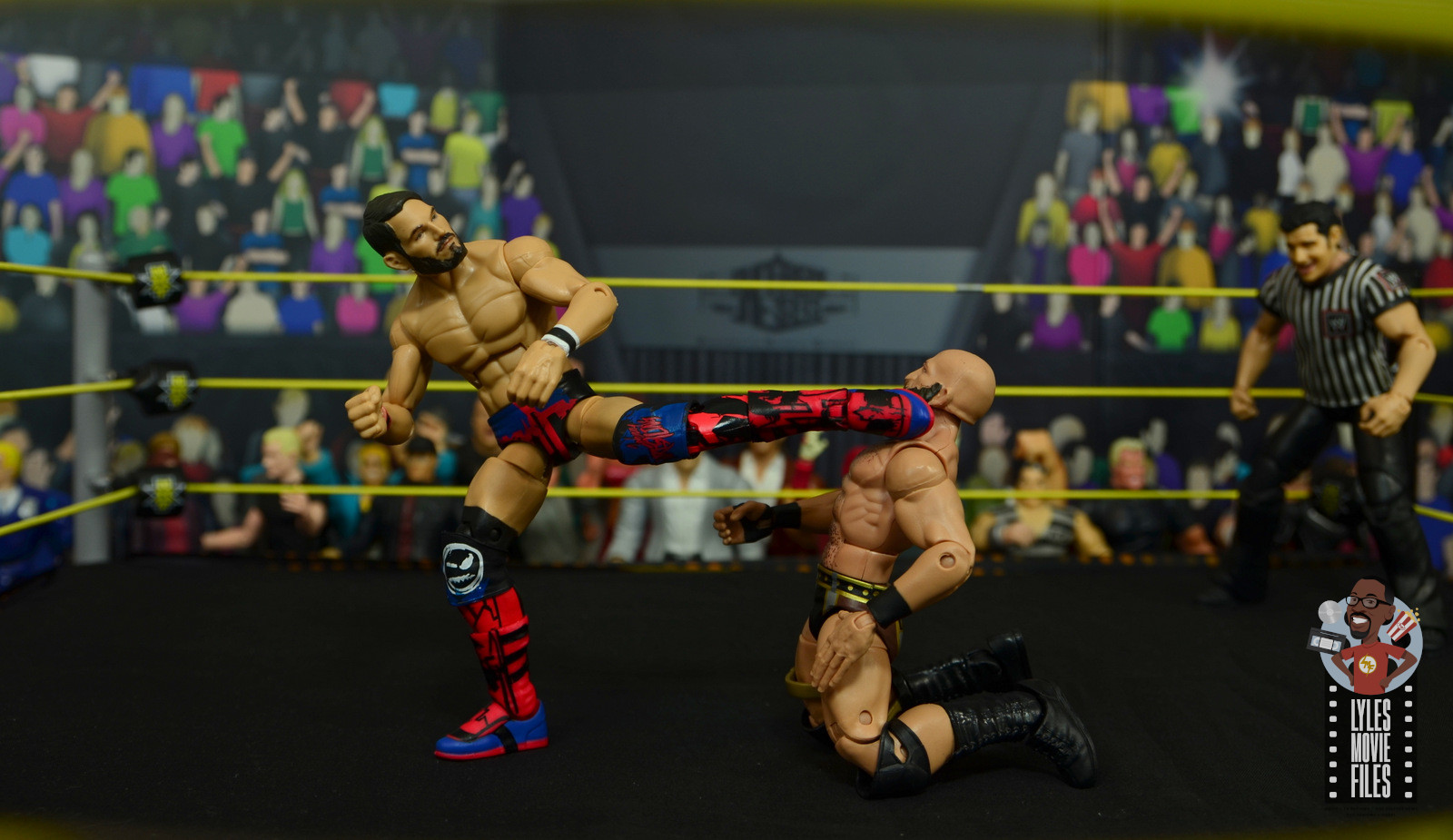 Articulation:  Hopefully Mattel has Gargano on the Ultimate Edition lineup soon as he’d benefit from the increased articulation. Not that the Elite articulation is bad, but every little bit of enhanced movement helps with a technician like Gargano. Still, save for the Gargano Lock you can hit most of his big moves. 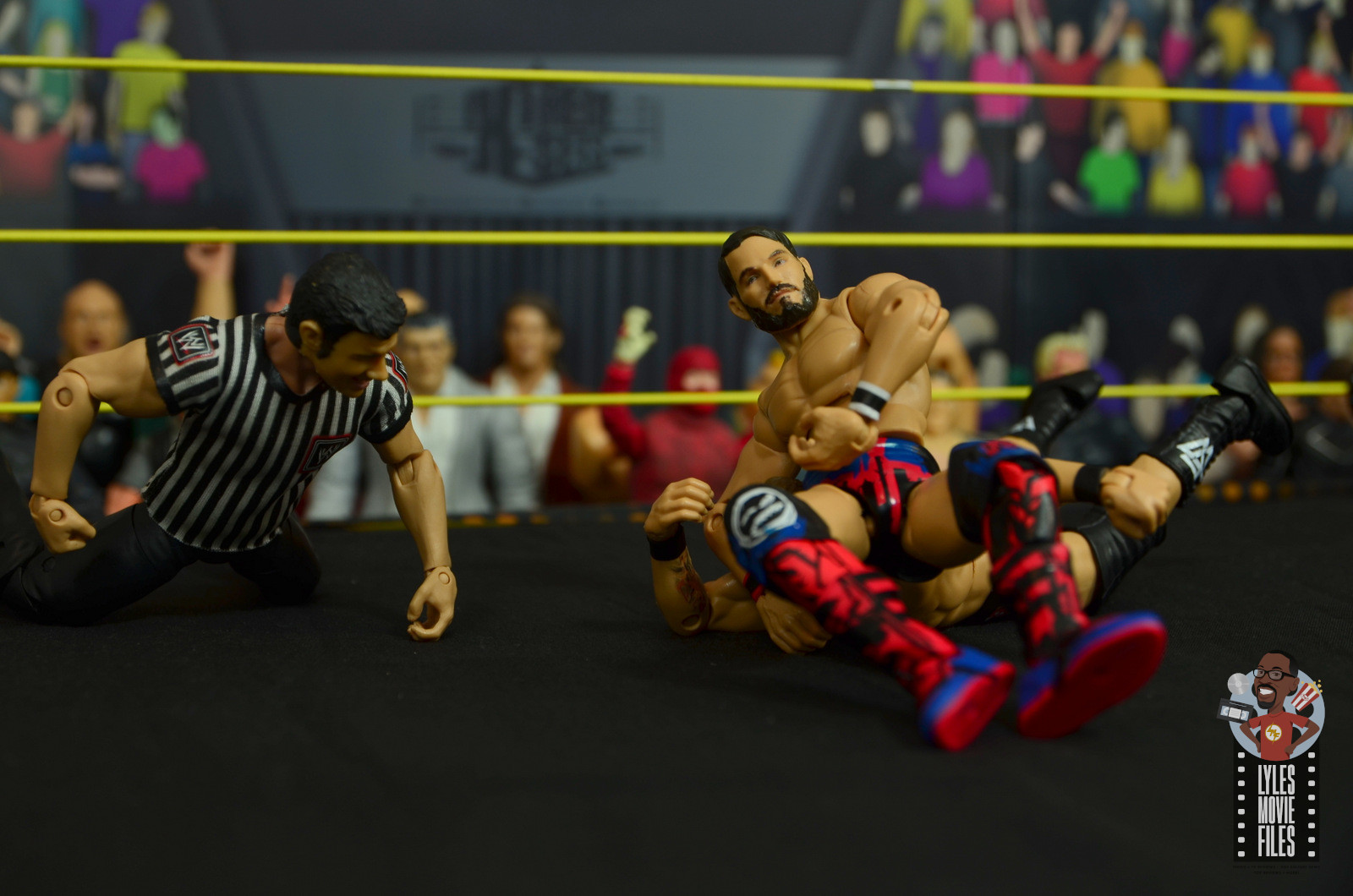 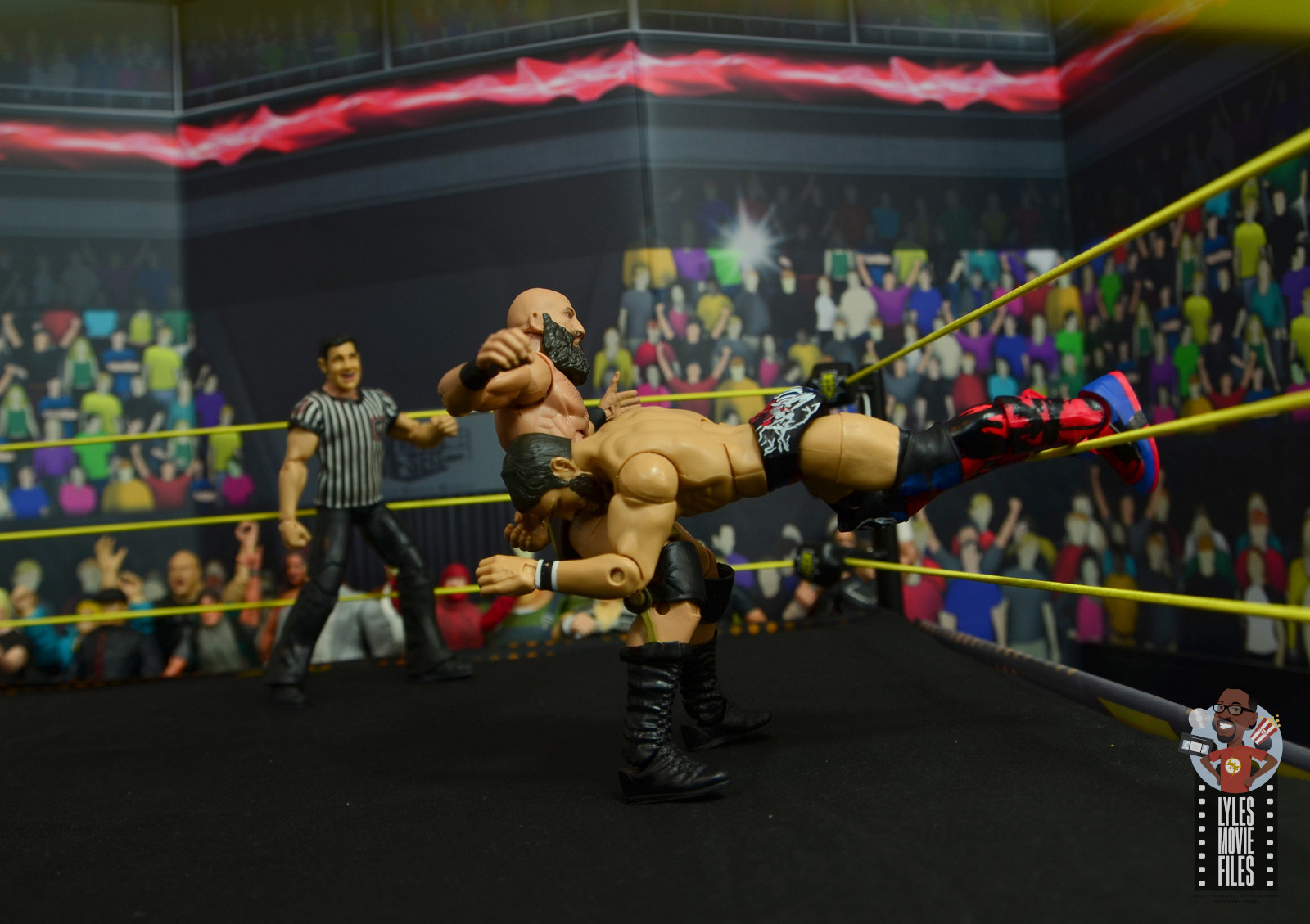 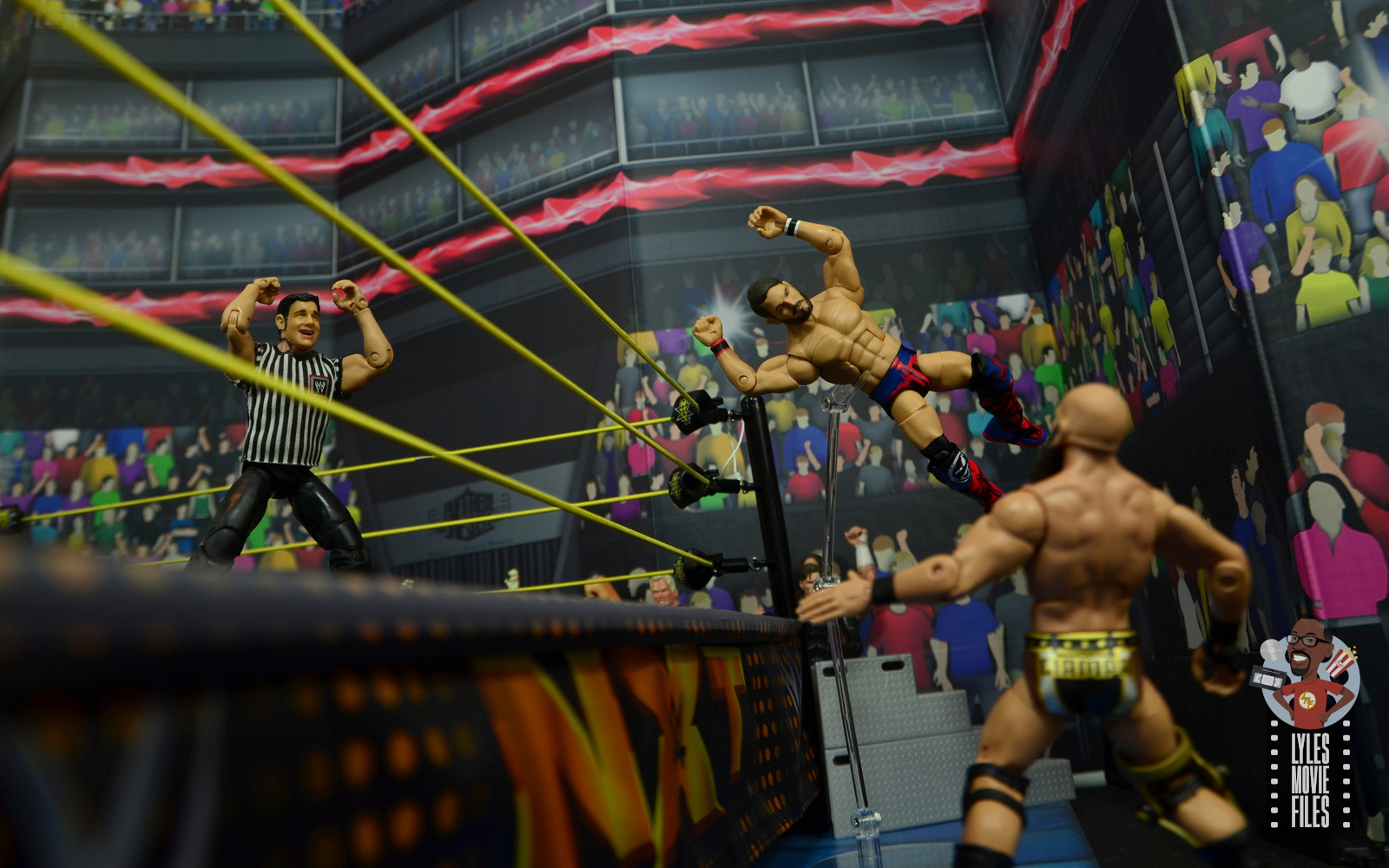 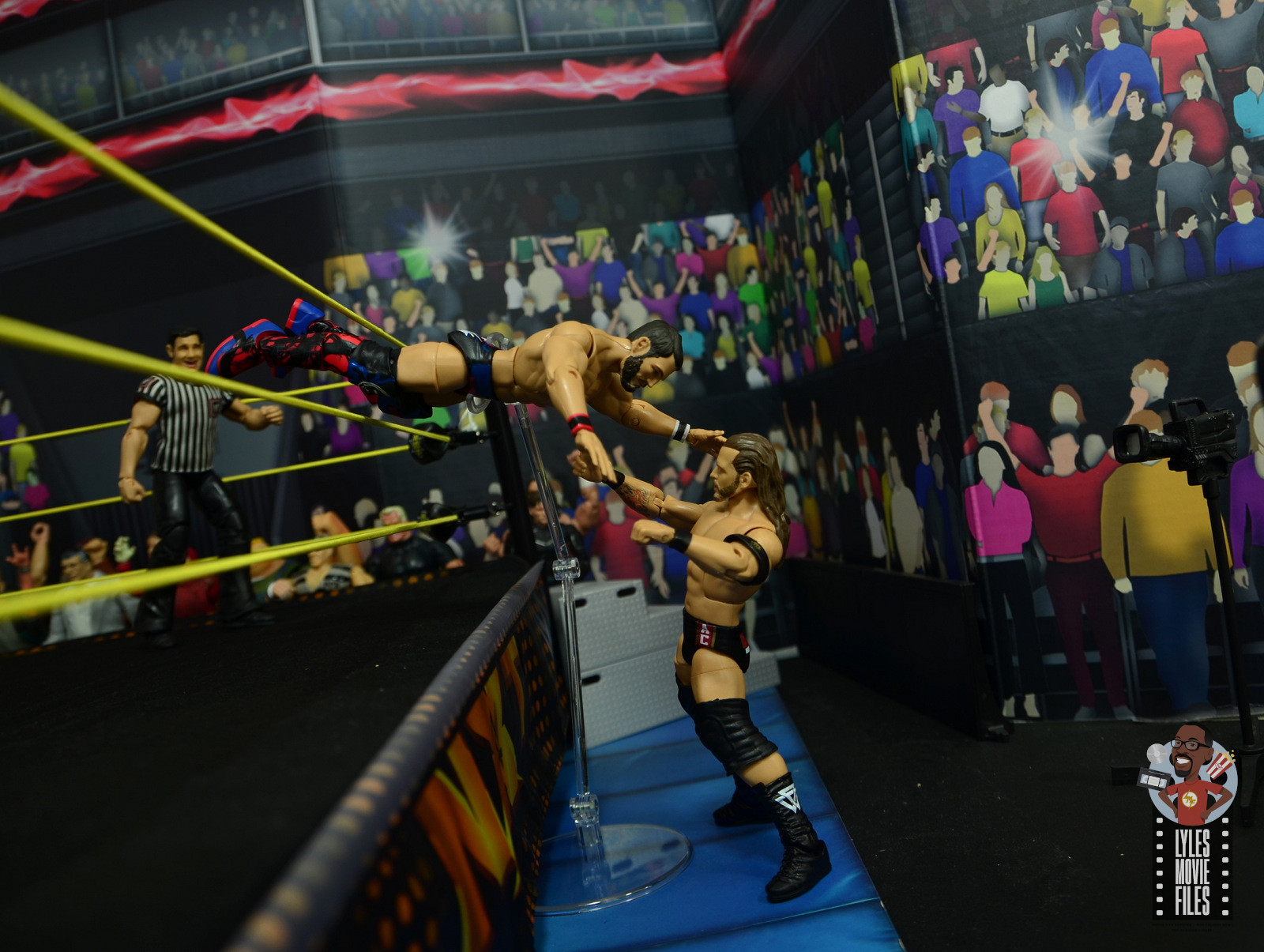 Accessories:  Gargano has a good amount of accessories starting with the ring vest to match his attire. The vest turned out well with the appropriate amount of details and paint apps.

Mattel also added two extra sets of hands — one is open palms and the other is a set of fists. These swap out easily enough and add some welcome extra options for display and posing possibilities. The open palms are a bit big, but I’ll cut them a break for trying something different.

Additionally, Gargano comes with a fire extinguisher in a nod to his TakeOver match with Ciampa. 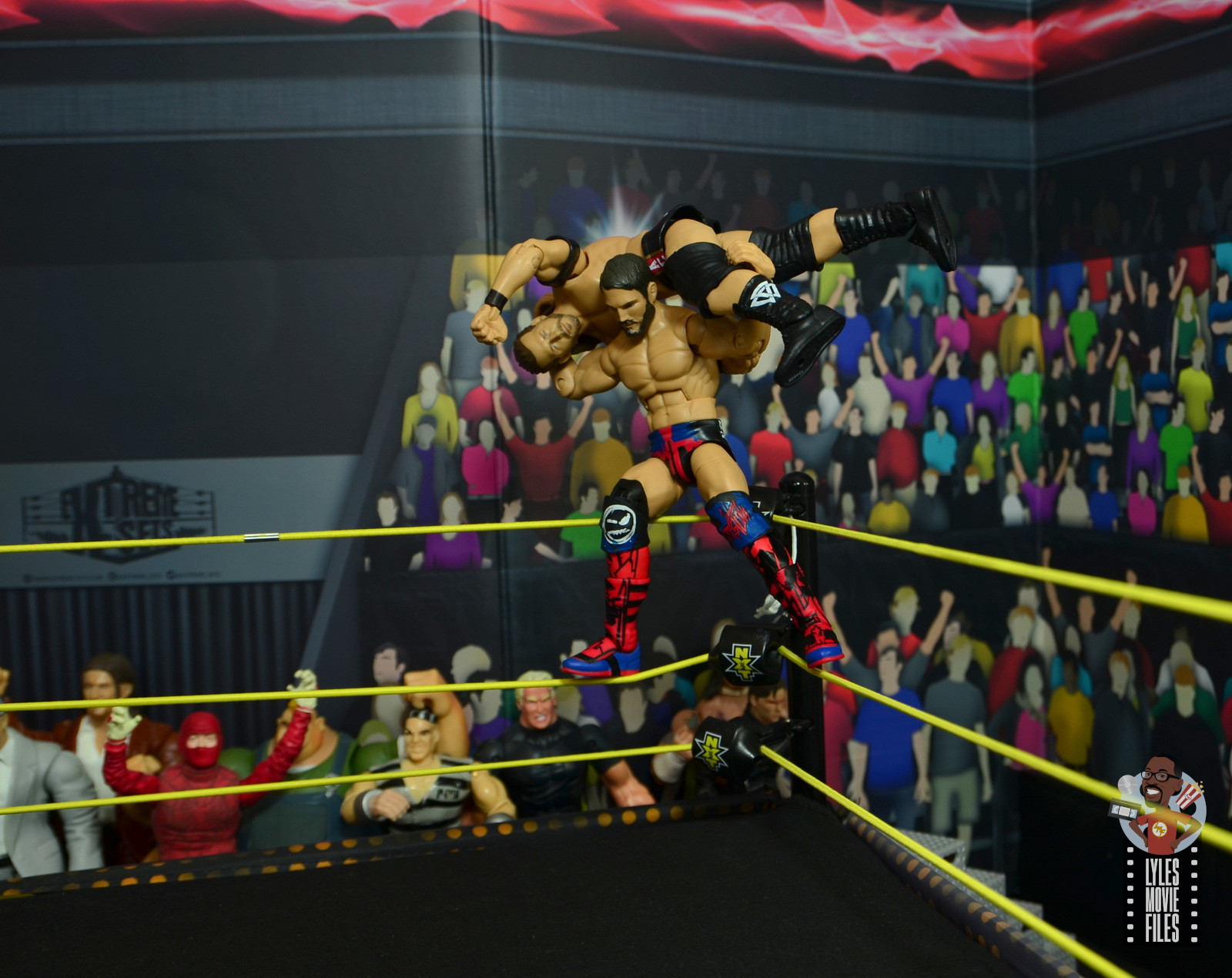 Worth it?  I got Gargano for $16. That’s the ideal price point for this line and better than the $20 regular price.

I really like everything about this figure except the janky knee/boot set up but it really looks bad. In the other areas this is a strong solo Gargano figure. 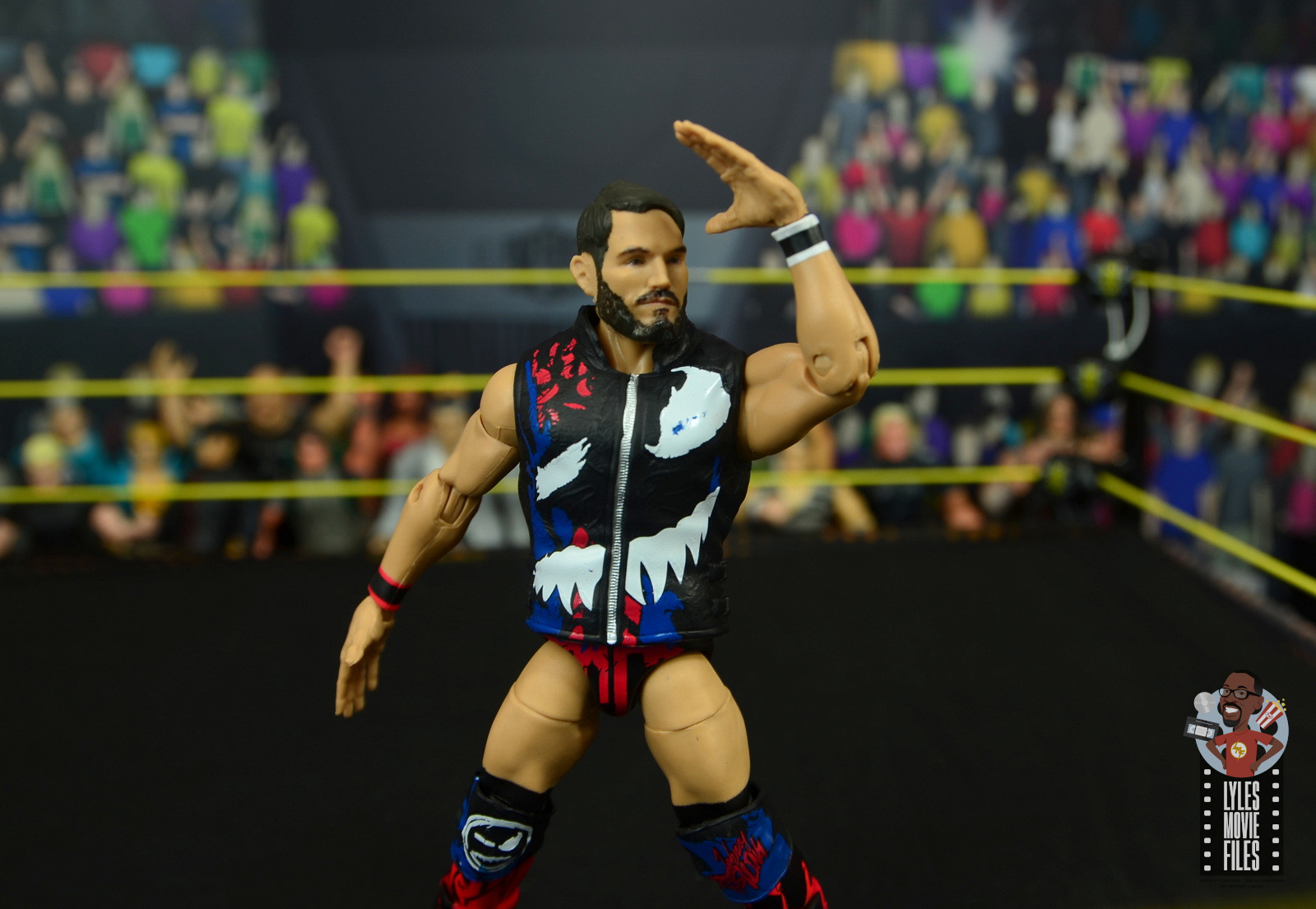 Where to get it?  Stalk Wal-Marts for this wave as they seem to have them in stock all over now based on multiple stores in my area having them. You can also grab him from Amazon.com without any trouble.