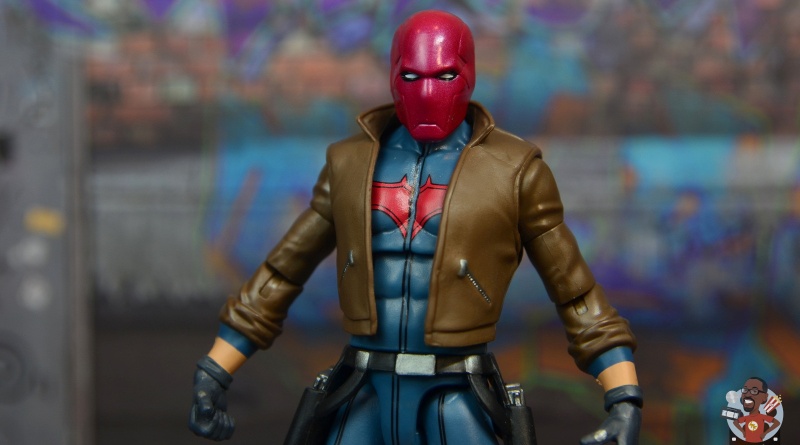 It used to be Bucky and Robin were the only untouchable dead characters. Then they were resurrected and became tremendously popular anti-heroes. Red Hood got a figure from DC Classics, but it was a baffling choice with a weird alternate look from Grant Morrison’s run.

It was starting to look like we wouldn’t get Jason Todd in his most iconic look from Mattel, but he snuck through with the final full wave of Mattel’s DC Multiverse line.

Packaging: I’m gonna miss Mattel’s blue color scheme as it really helped the line stand out among others on the pegs. This bio gives a decent background on Red Hood from his Rebirth era timeline. You’re able to see all of his accessories though I definitely think they could spotlight the Collect and Connect piece better. 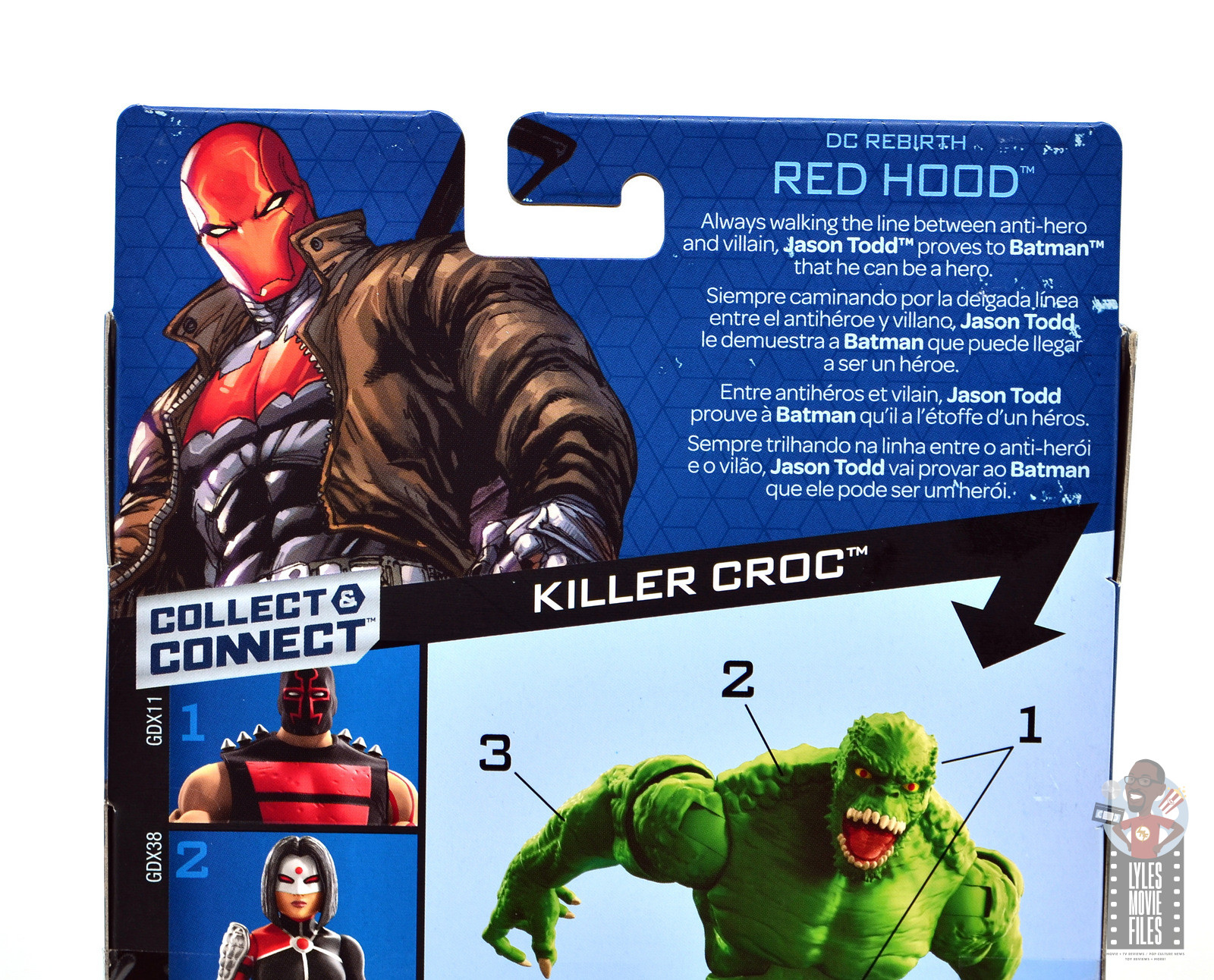 Likeness: The style guide Mattel used for these figures is from Rebirth designs. That means Jason has his brown jacket with bat-logo. I like this look more than the literal red hood design currently used in the comics.

Mattel sculpted the seams of the chest piece like the source material. I really like how the sculpt captures how Jason wears his leather jacket with the sleeves partially rolled up and the collar popped. Still, the jacket lacks much in terms of wrinkles in the sculpt. 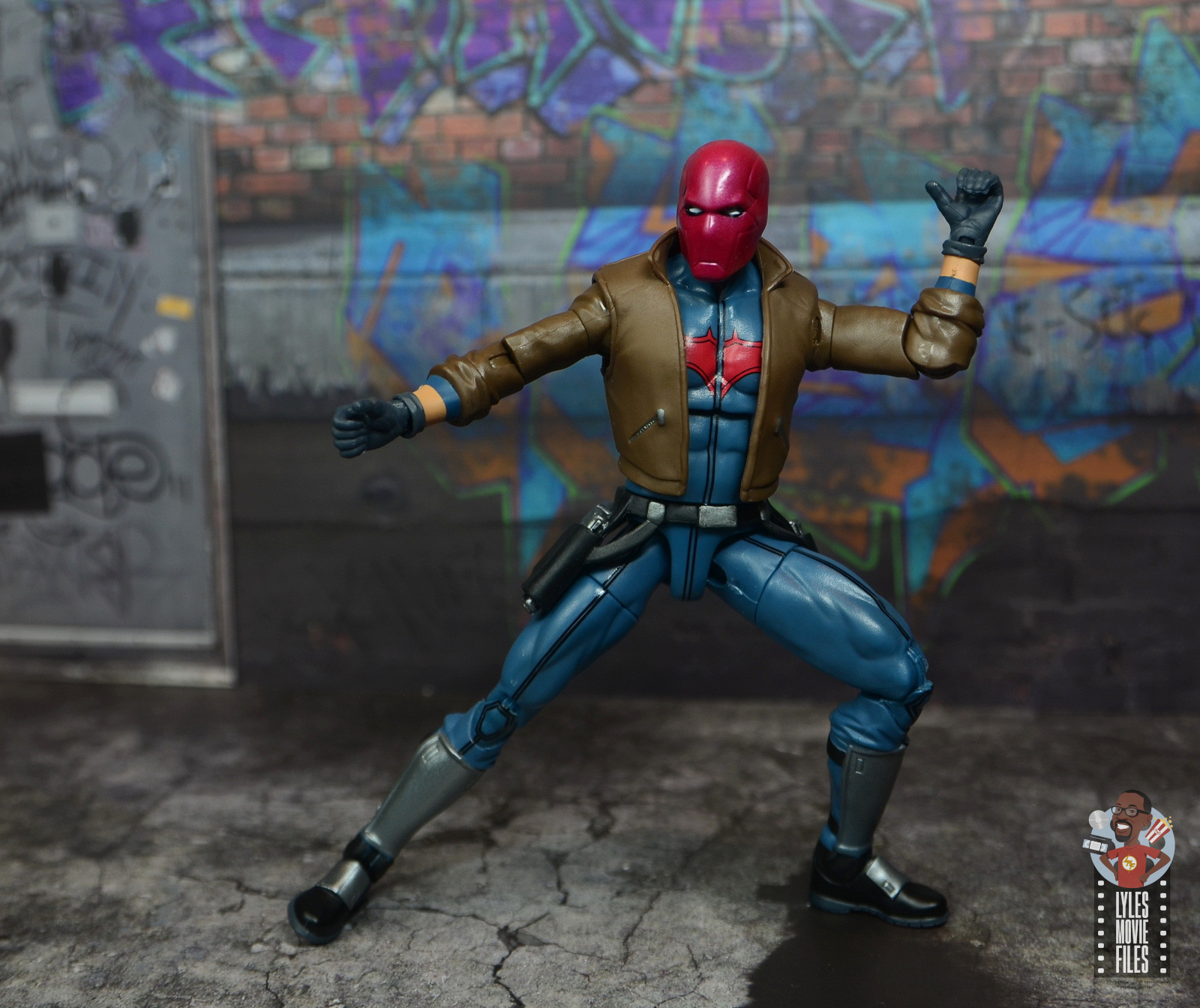 The scale of the helmet actually looks like a human head could fit underneath it, which is not normally the case in the 6-inch format. For whatever reason the head sits way too low giving Red Hood a no-neck appearance.

Beyond that the figure looks pretty sharp with the holster and guns lined up right albeit with some missing detail. The shin guards and boots look nice as well. 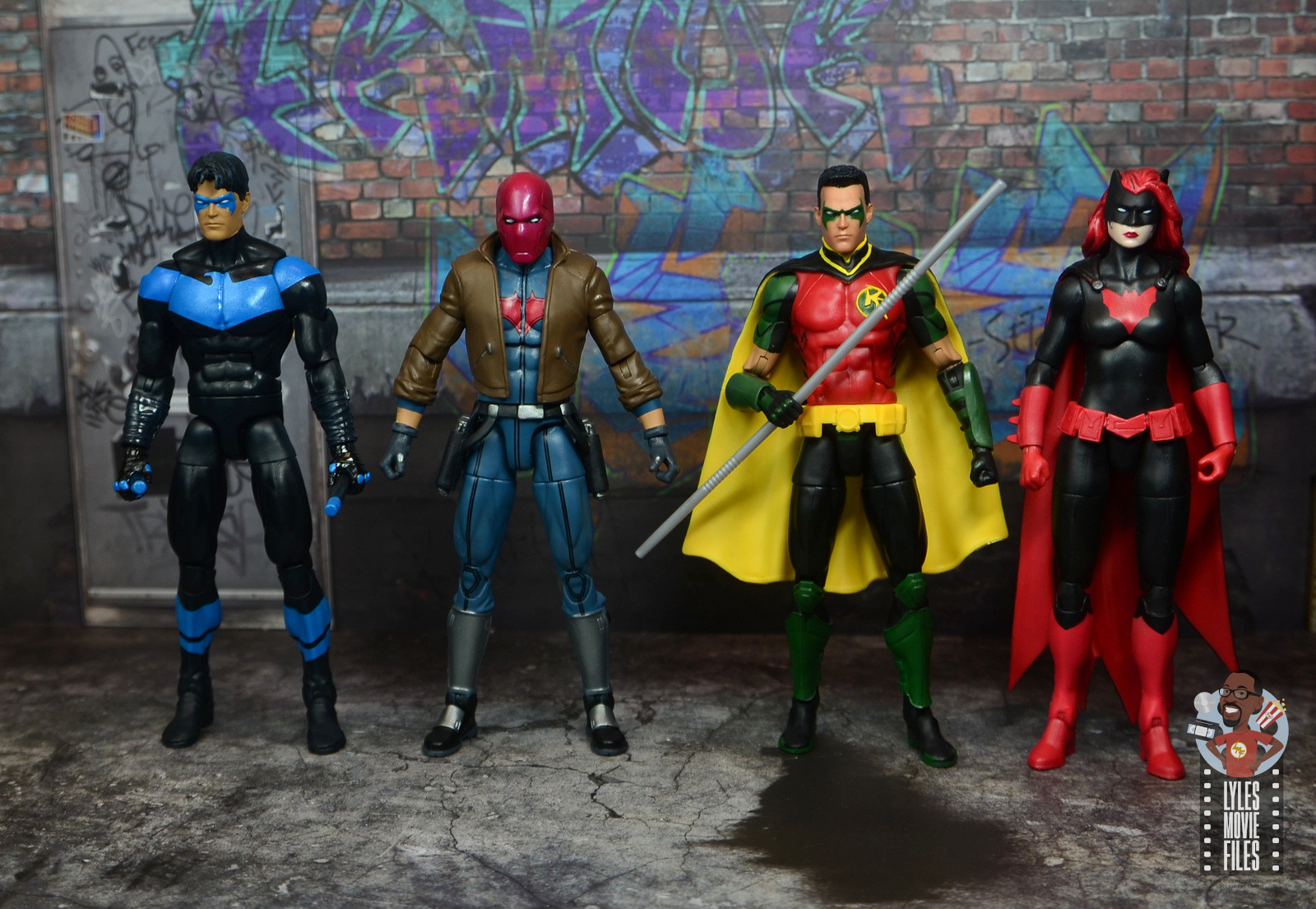 Scale:  He’s smaller than the Dick Batman and just a tad taller than the way too tall Red Robin figure. In the comics, he’s about eye to eye with Nightwing. 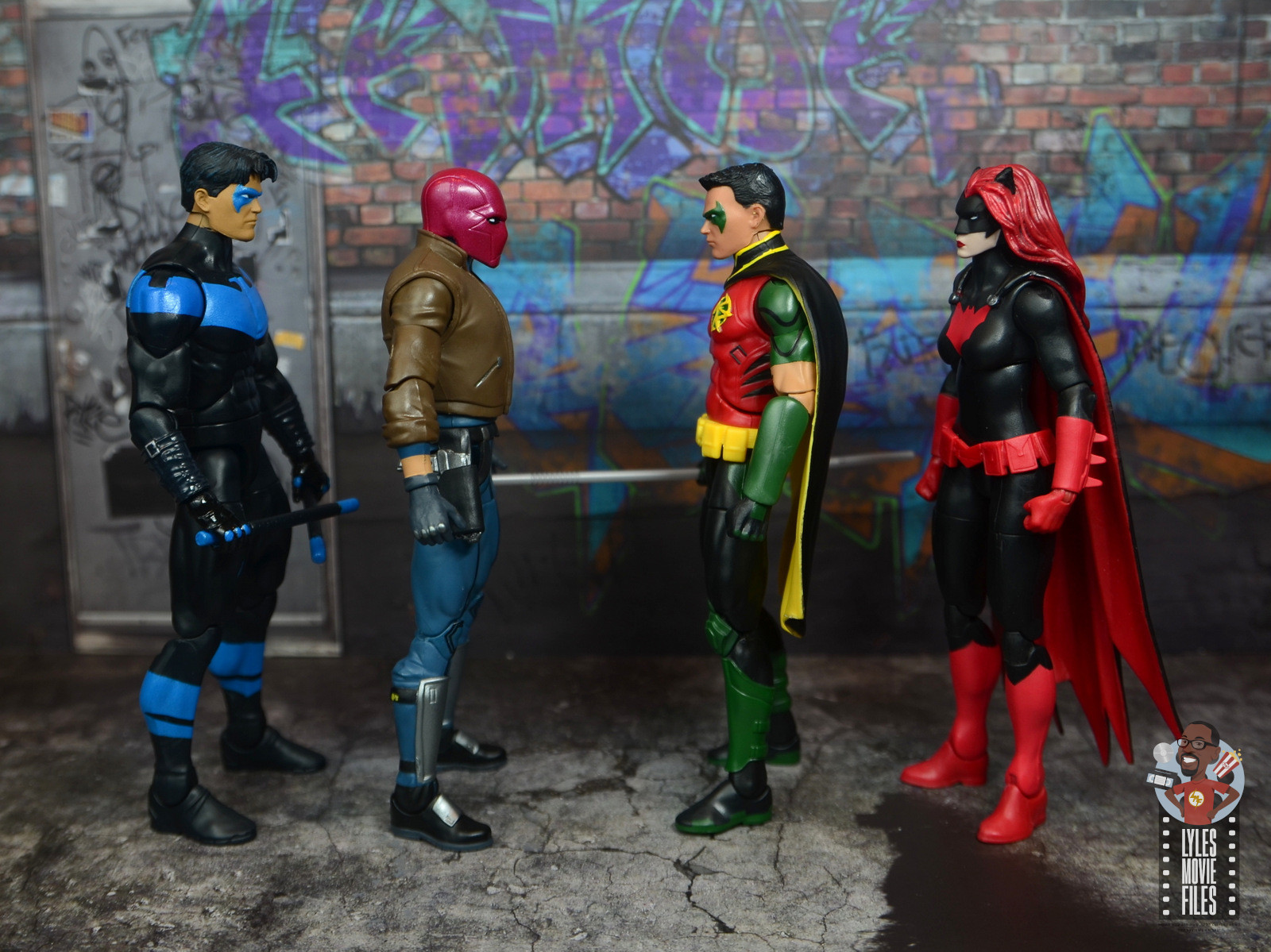 Overall, Red Hood is slighter than both sidekicks and doesn’t look like he’s part of the same line. He’s actually a much better fit with the DC Classics figures despite being a little taller than Batman.

Paint:  There’s no issues with the paint applications. They’re all very clean with no slop or overspray at all. I really wish there was some wash on the jacket as it looks too plain. Some shading on the bodysuit would have been nice as well. The best aspect of the paint job is the helmet, which has a nice cherry red with deep sunken eyes.

Articulation: This series Multiverse figures sported better articulation than the standard DC Classics figures. It wasn’t quite Marvel Legends level, but it was a big improvement allowing for more creative posing for DC figures. 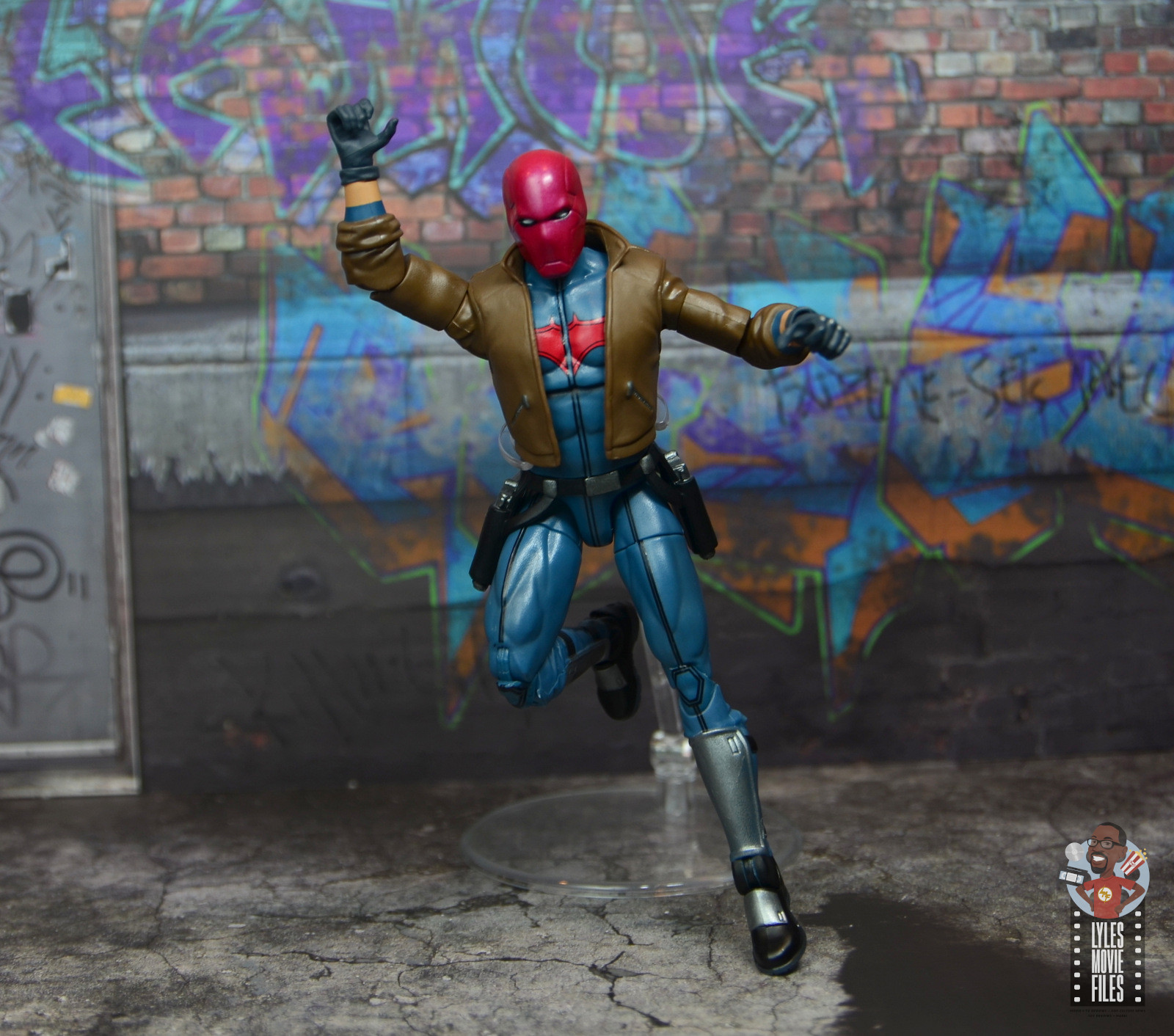 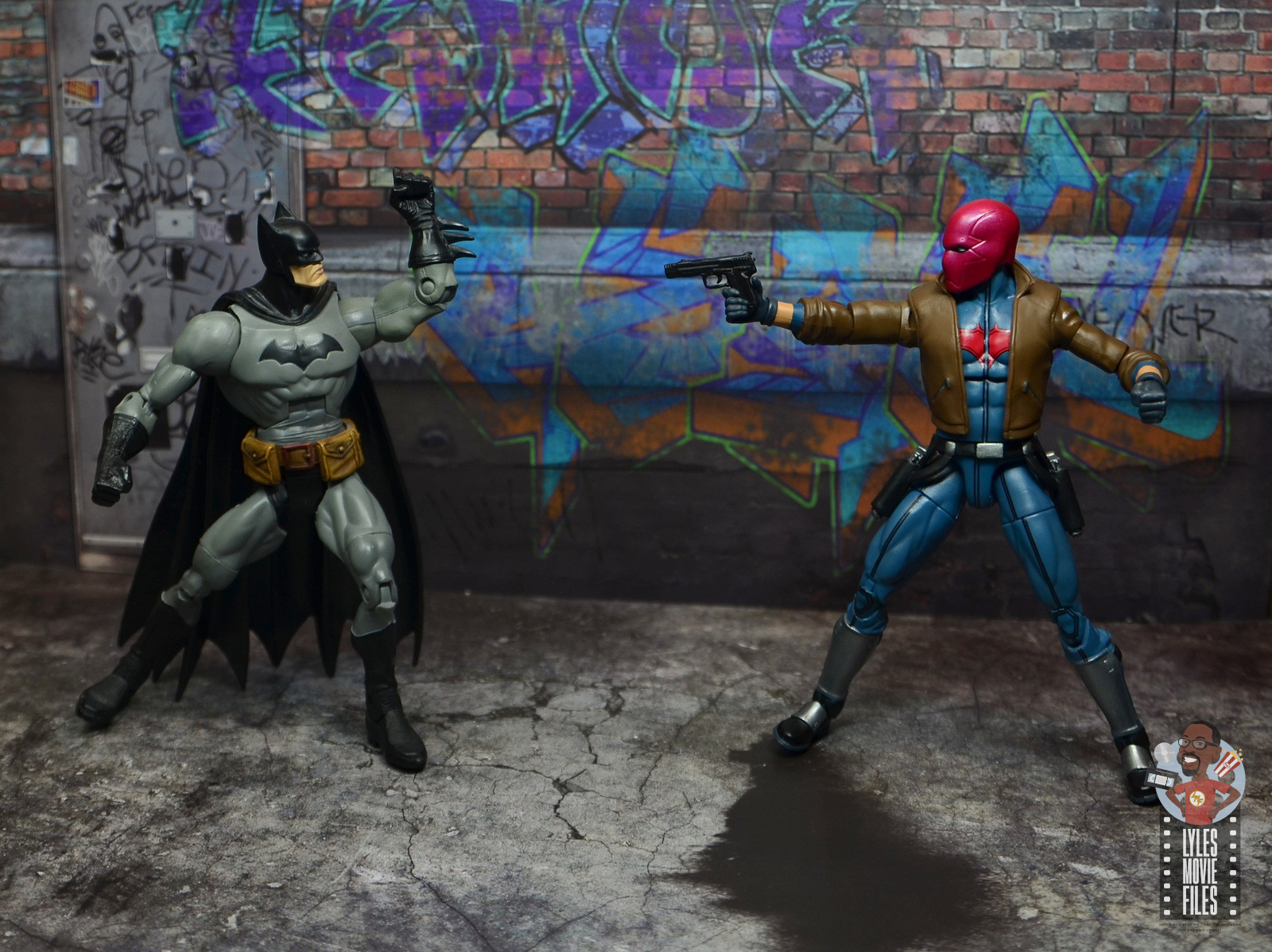 Accessories: Red Hood has the most questionable setup of accessories in this wave. He’s got two alternate sets of hands — trigger hands and fists. Not an issue as alternate hands are welcome. The problem is the lack of guns. 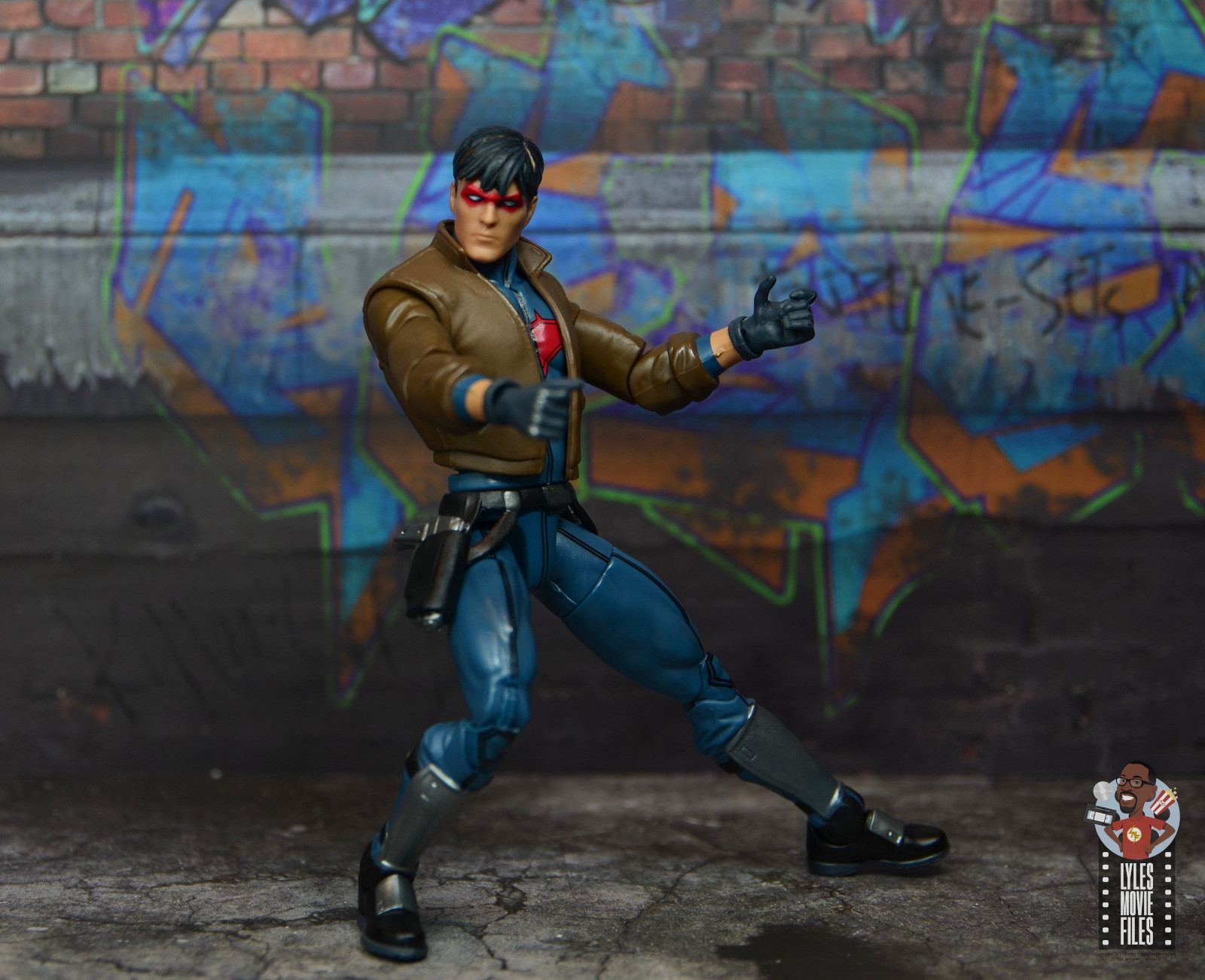 Yes, the figure has two sets of hands designed for holding guns, but the figure doesn’t have any weapons. Sigh. This makes the decision to sculpt guns in the holster even more frustrating.

Mattel did include an alternate Jason Todd head. The hair strands could use more detailing, but otherwise it looks good. I am a little gun shy about swapping heads after my trouble with the Dick Batman figure. There’s some missing black in the hair, but that’s an easy enough fix. 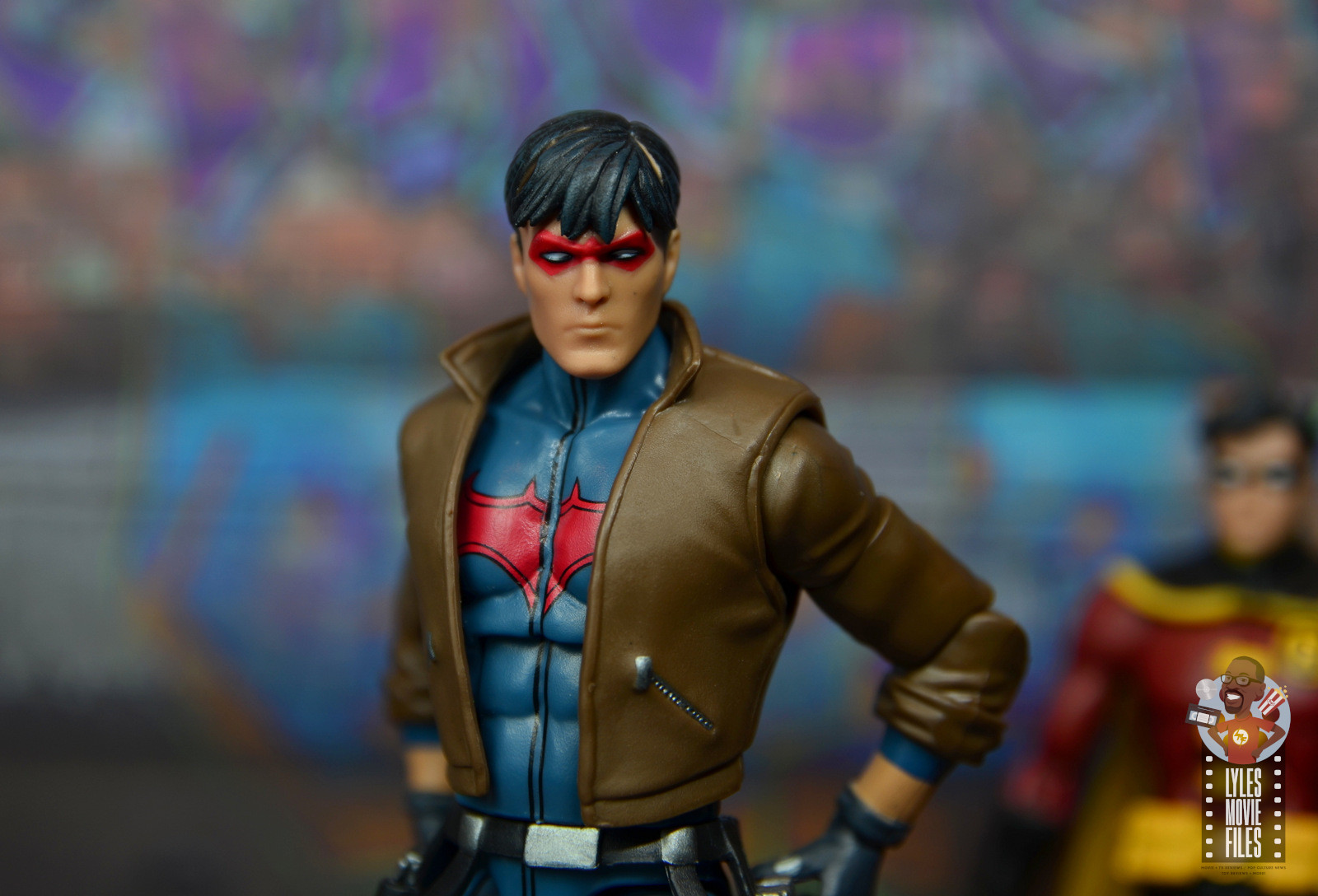 He also comes with the right leg of the Collect and Connect Killer Croc. 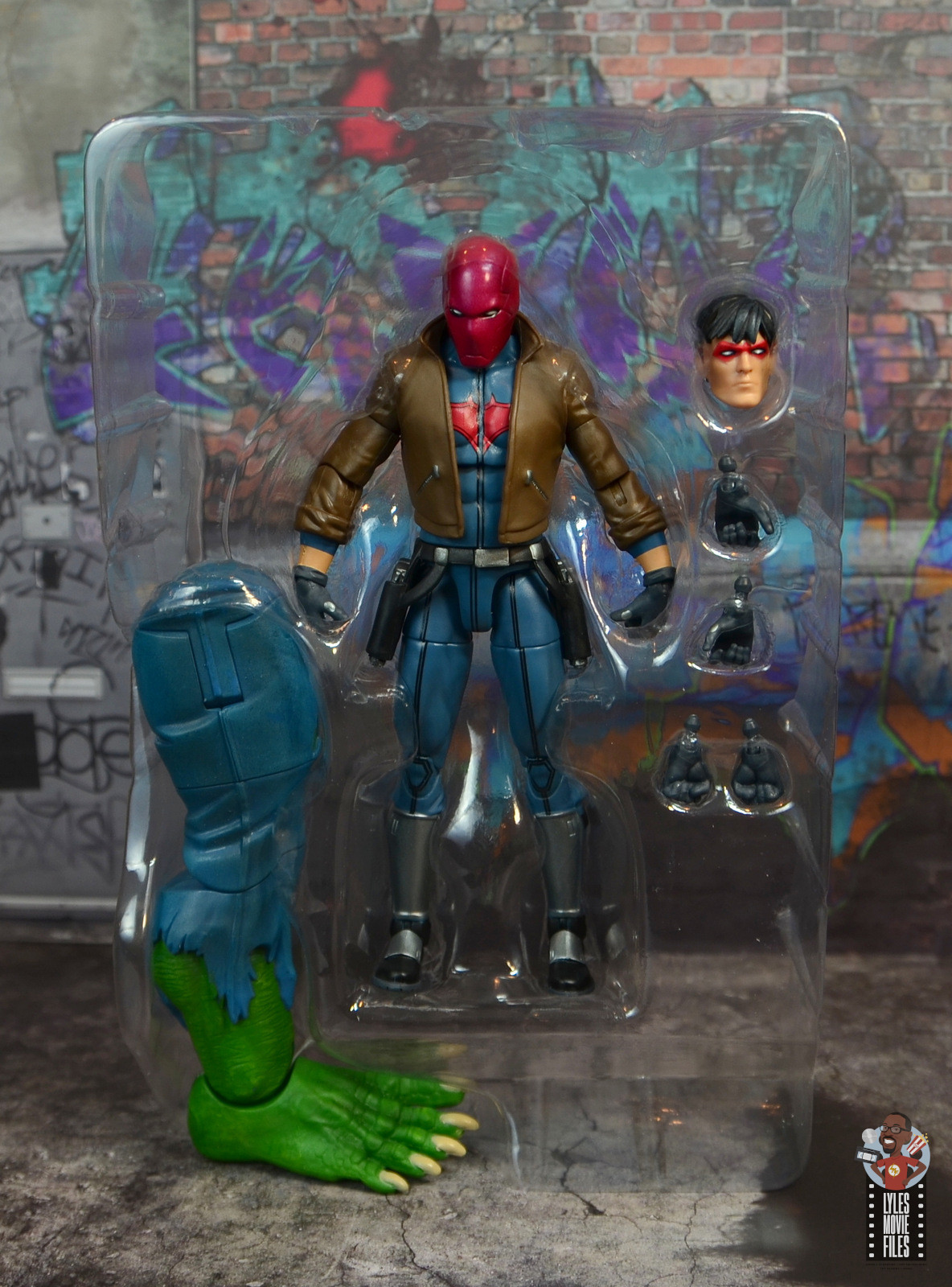 Worth it? I got Red Hood for $20, but he seems like the hard to track down figure of this wave. I wouldn’t pay more than that for him. A better option might be the DC Essentials version.

The baffling decision to keep the guns in the holster and the overall smaller scale hurts his ability to fit in with the Multiverse figures, but at least we finally have a DC Classics scaled Red Hood. 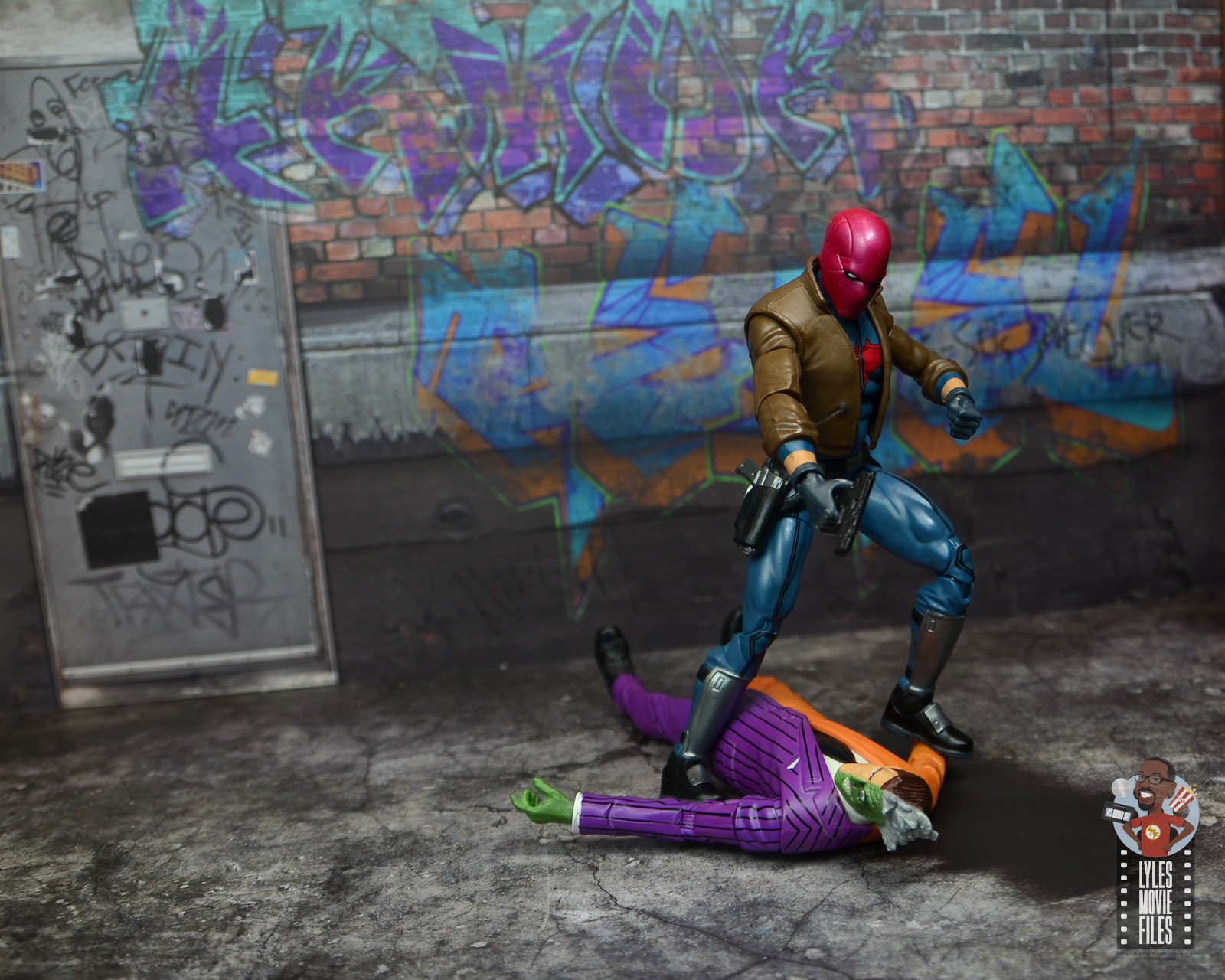 Where to get it? Wal-Mart has this wave on clearance if you can still find them, but you can get Red Hood online for a markup at Amazon or order the full Killer Croc wave at Entertainment Earth.