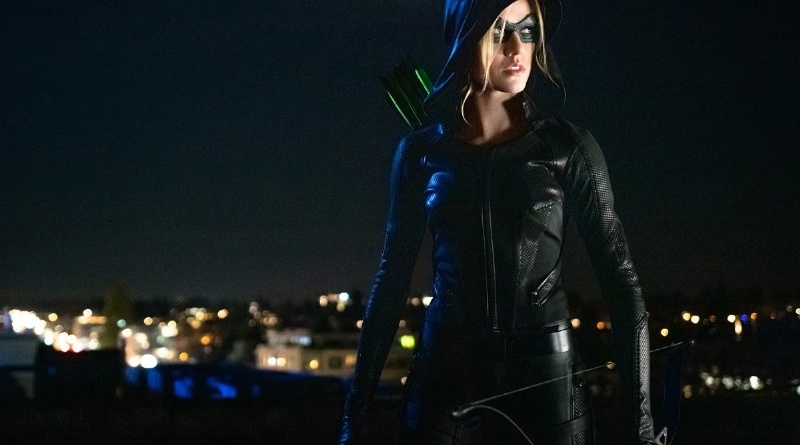 After two seasons of build-up, Arrow’s penultimate episode is devoted to the backdoor pilot of Green Arrow & The Canaries. Did it sell me on this spin-off series?

Star City 2040 is a lot different place than earlier in the series. It’s a sterling metropolis with apparently no traces of the run down Glades.

Mia is a socialite and is with JJ, who provides a double shock by proposing. That’s interesting. For her big graduation party, Mia is thrilled to see a very much alive Zoe and William, who’s geeked about being the Man of Honor. She’s less happy to see Connor here as he’s back out following another stint in rehab. These new dynamics are actually interesting, which is why it’s so annoying when Laurel shows up and uses a magic ring from Cisco that utilizes J’onn’s powers to make people remember their worst pre-Crisis life. 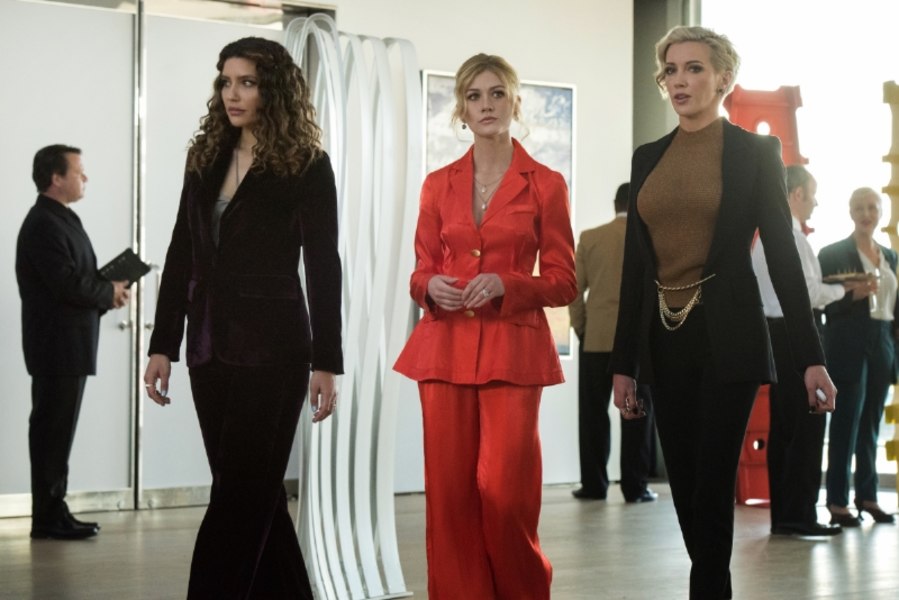 These shows are missing the point of the Crisis reset by making all the main characters remember life before it. A show like Green Arrow and The Canaries would actually benefit from a relatively clean slate with just the viewers being able to appreciate the changes these characters know nothing about. And even if some characters needed that recall it basically makes it like Crisis never happened if they still act the same way.

The major thing DC did post Crisis was use it as an opportunity to refine characters who needed more depth, a greater purpose and better portrayals. That’s actually happened with Mia, who isn’t nearly the abrasive personality she was the last two Arrow seasons. It doesn’t mean a whole lot if other characters like Laurel get a character pass to be dicks. Her bogus apology was trash too.

Laurel also recruits Dinah, who was magically transported to 2040 right after Oliver’s funeral. There’s lazy writing and unnecessary writing decisions. That opens up a lot of questions that honestly weren’t that important to raise in the first place.

Laurel confides that the kidnapping of Bianca Bertenelli, the daughter of former Huntress, Helena, triggers the downfall of Star City. Ultimately, Laurel reveals she came to the future and dragged Mia into becoming Green Arrow again because she would be blamed for Star City’s fall from grace.

It’s an edgier tech version of Arrow with a bad soundtrack.

Apparently Laurel is going to be the jerk aunt while Dinah is the cool one. Laurel may be even more obnoxious than Mia or William simply because she’s being a tool for no reason. In the middle of a mission, a Deathstroke pops up and Laurel assumes it’s JJ despite never having any actual history with him.

After enough prodding, Mia is convinced Aunt Laurel knows best and accuses JJ of kidnapping Bianca. JJ was focused on honeymoon spots prompting the insane bit of dialogue where Mia seriously asks “Can we please go back to the time before accused you of being a criminal?” Pretty sure that’s not how it works, Mia.

Turns out it was Bianca’s ex-boyfriend, Trevor, who kidnapped her and was operating as a Deathstroke. I’m also convinced this is the official shark jumping moment of the threatening visual of the Deathstroke mask. 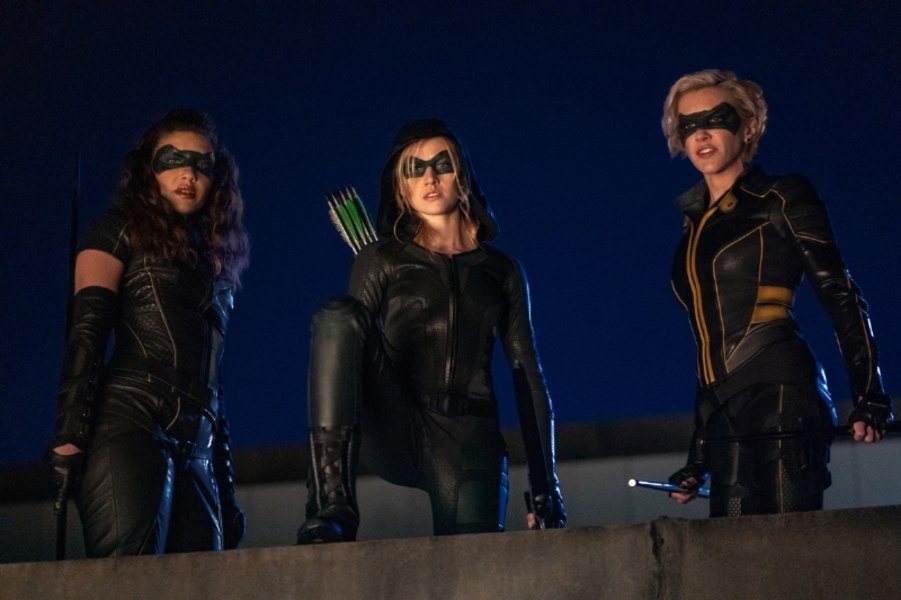 Mia, Dinah and Laurel fight some of Trevor’s endless army of goons before deciding there’s too many of them. Did everyone forget Laurel and Dinah have actual super powers? Also, I’m gonna need explosions to go off when people ask me who I am from now on.

William thinks it’s misogynistic that the press is asking if he’s Green Arrow. I would 100 percent think it’s Mia over William as she’s far less lame a character. Someone kidnaps William and knocks out Mia and they are conveniently associated with Trevor and the symbol on the Queen Family keepsake rock. 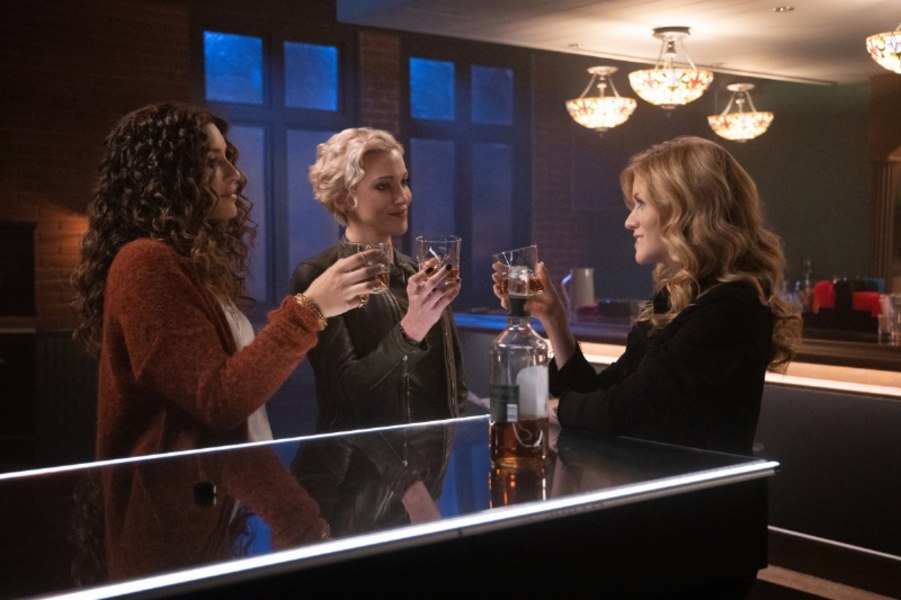 In true Arrow fashion, a cloaked mysterious figure uses the magic tech ring to give JJ his memory back too. Again, there’s no point in this if everyone is just going to have their old memories regardless of the new setting.

Was this enough to make me buy in to the spin-off? In a word, no. There’s too much Arrow DNA in Green Arrow and the Canaries to get me excited about it especially since the most interesting dynamics that could have made for a good hook were ruined right away.

Honestly, just waiting until the end of Season 1 to give JJ recall would have made for a crazy season finale after we’d gotten invested in this new relationship. Now, I just don’t care and that’s a mentality that holds true for the spin-off in general.