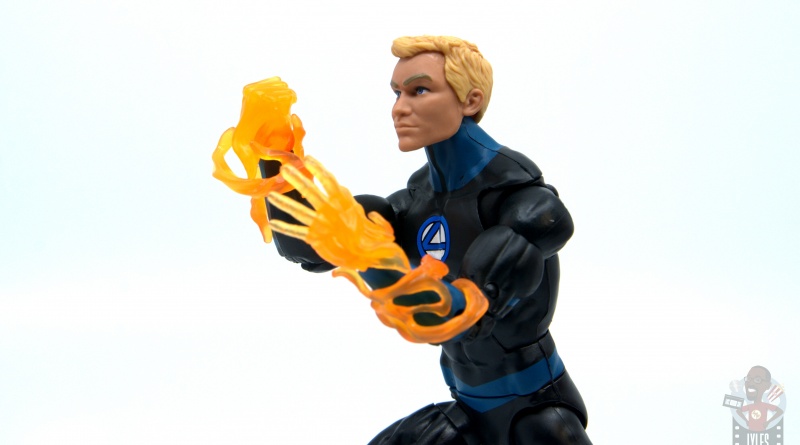 If I had one gripe with the Walgreens exclusive release of the Fantastic Four it was we didn’t get an alternate powered down Human Torch/Johnny Storm figure. Yeah, we could have gotten two Mister Fantastic figures and bought a Scarlet Spider figure to make one, but Reed and Johnny should have different body types. Hasbro addressed that with the Build-A-Figure Super Skrull wave with a Johnny Storm release. This still makes me want a classic Johnny figure, but let’s see how this modern figure turned out.

Packaging: This is one of those crammed packages where you get to see so much that you feel like you’re getting your monies worth. I really love the side portrait. 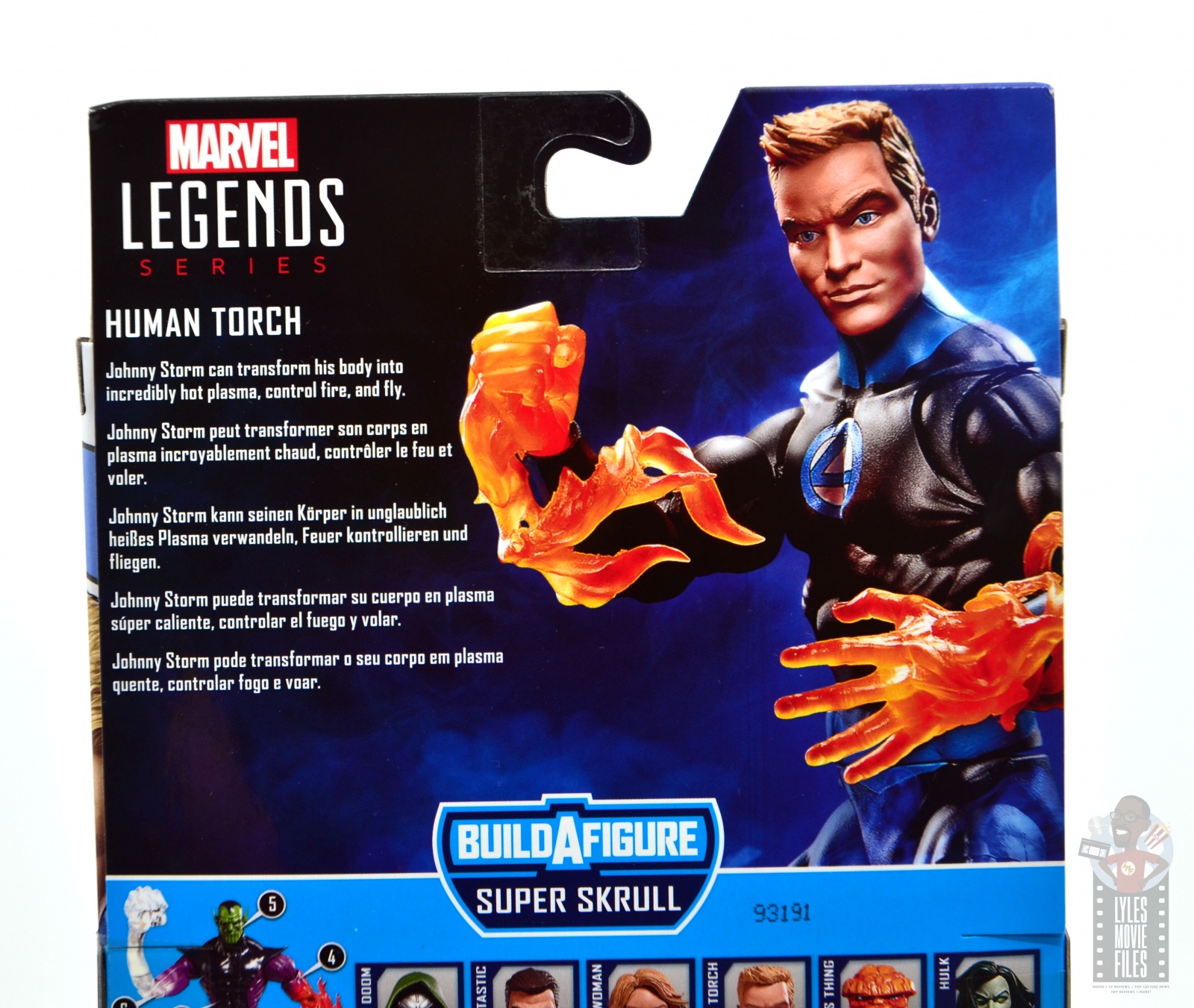 Like The Thing, there’s no mention of the FF on the bio, which has gotten more generic over the waves it seems. 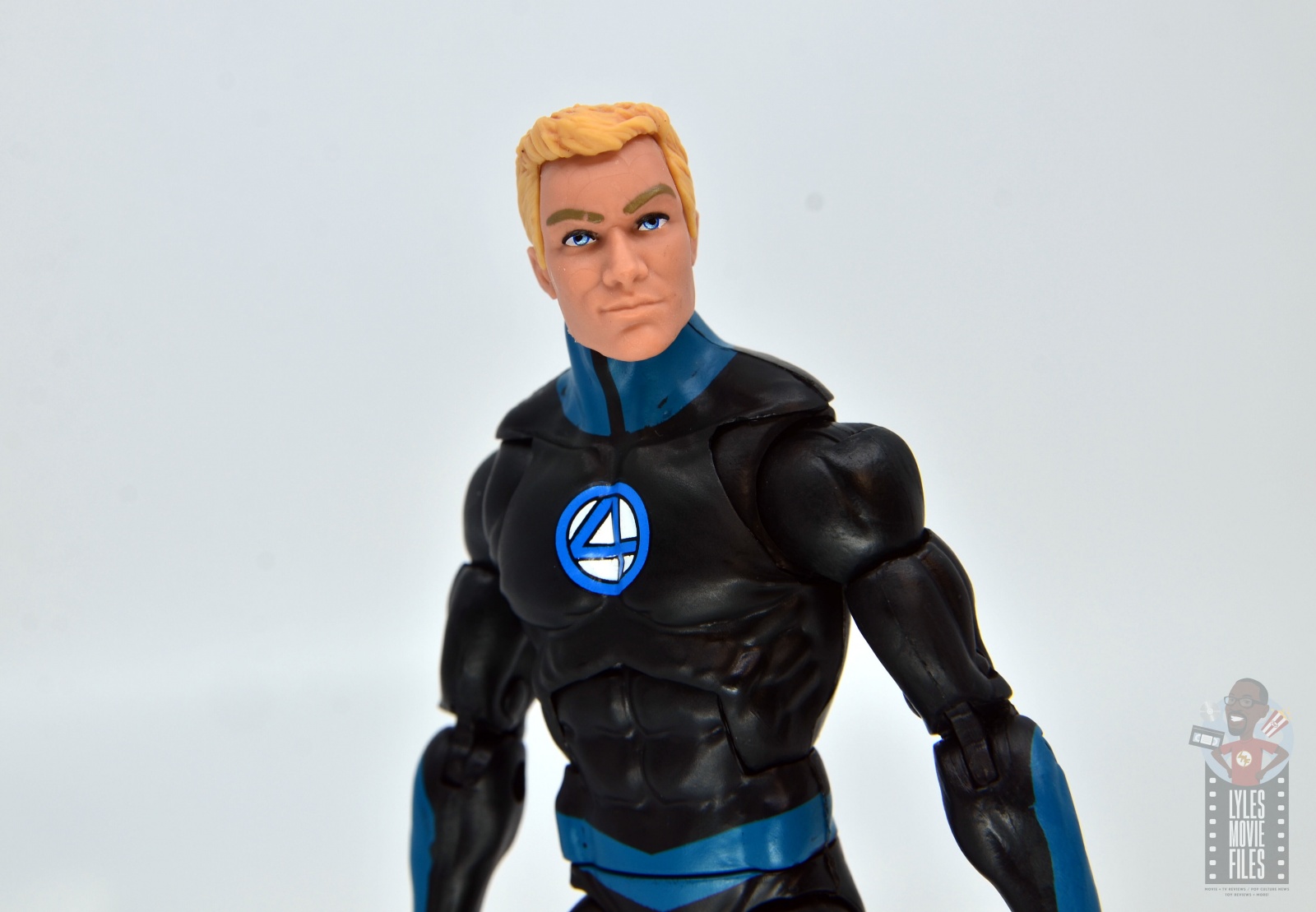 Likeness:  There’s something I love and hate about this head sculpt. Johnny kinda looks like a douche you’d see at a club with 20 hot girls around him, but I like the smug, confident expression.

There’s not much else to the actual sculpt itself since all of the costume details are painted instead of sculpted. This is one of those outfits that would benefit from the detail being sculpted as it’s asking a lot from the paint. 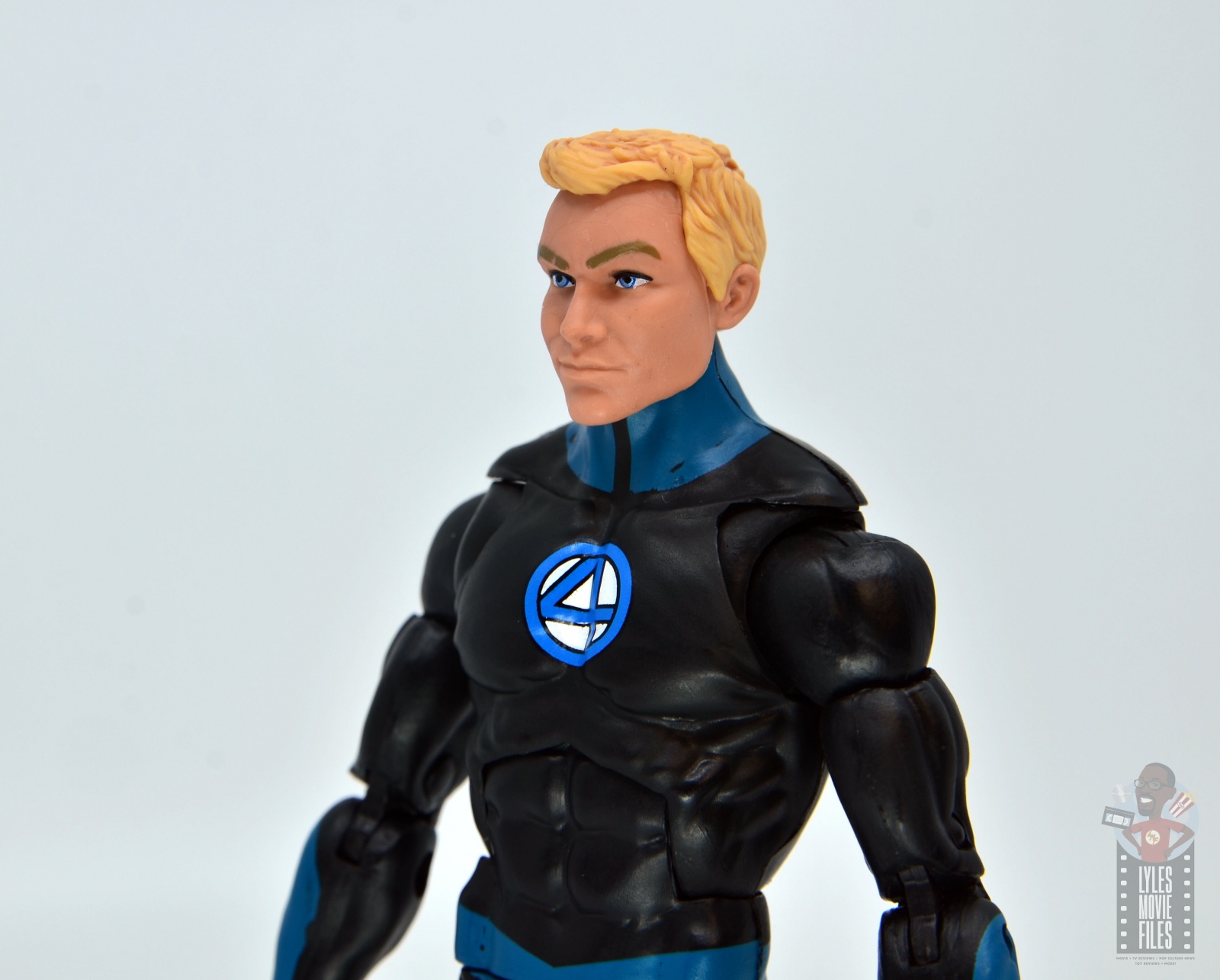 I’m way behind on the modern FF run, but apparently they’re rocking boots with some cleats type material. They’re sculpted on the figure as well, which should help him keep his balance in dynamic poses. 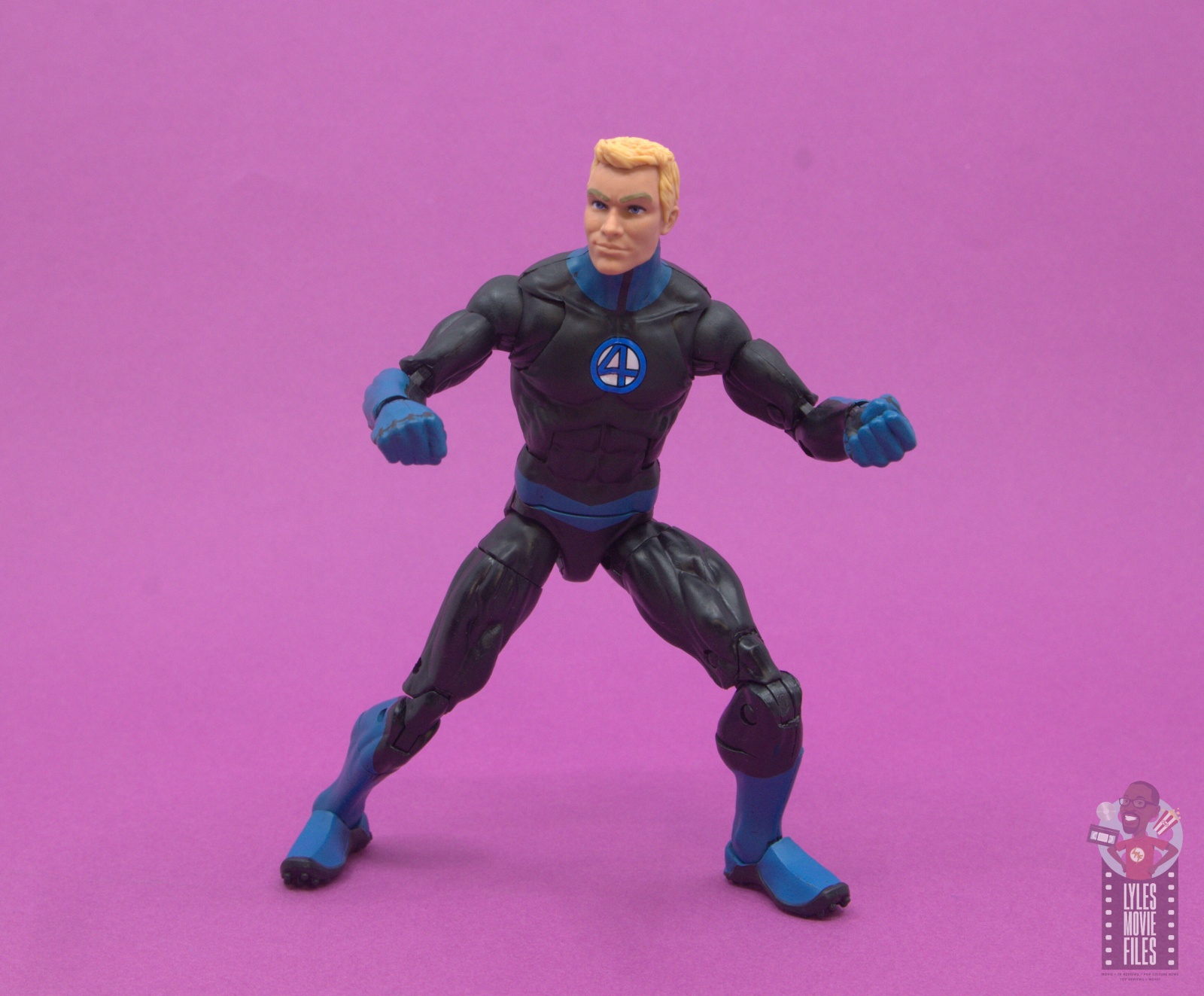 Paint:  There’s not a lot of crazy paint demands on this guy since the outfit is mostly black.

The blue accents break up the all black and they’re clean enough although there’s some inconsistencies. His right eye’s iris isn’t painted on center, but it’s something you wouldn’t notice without getting up close to it. 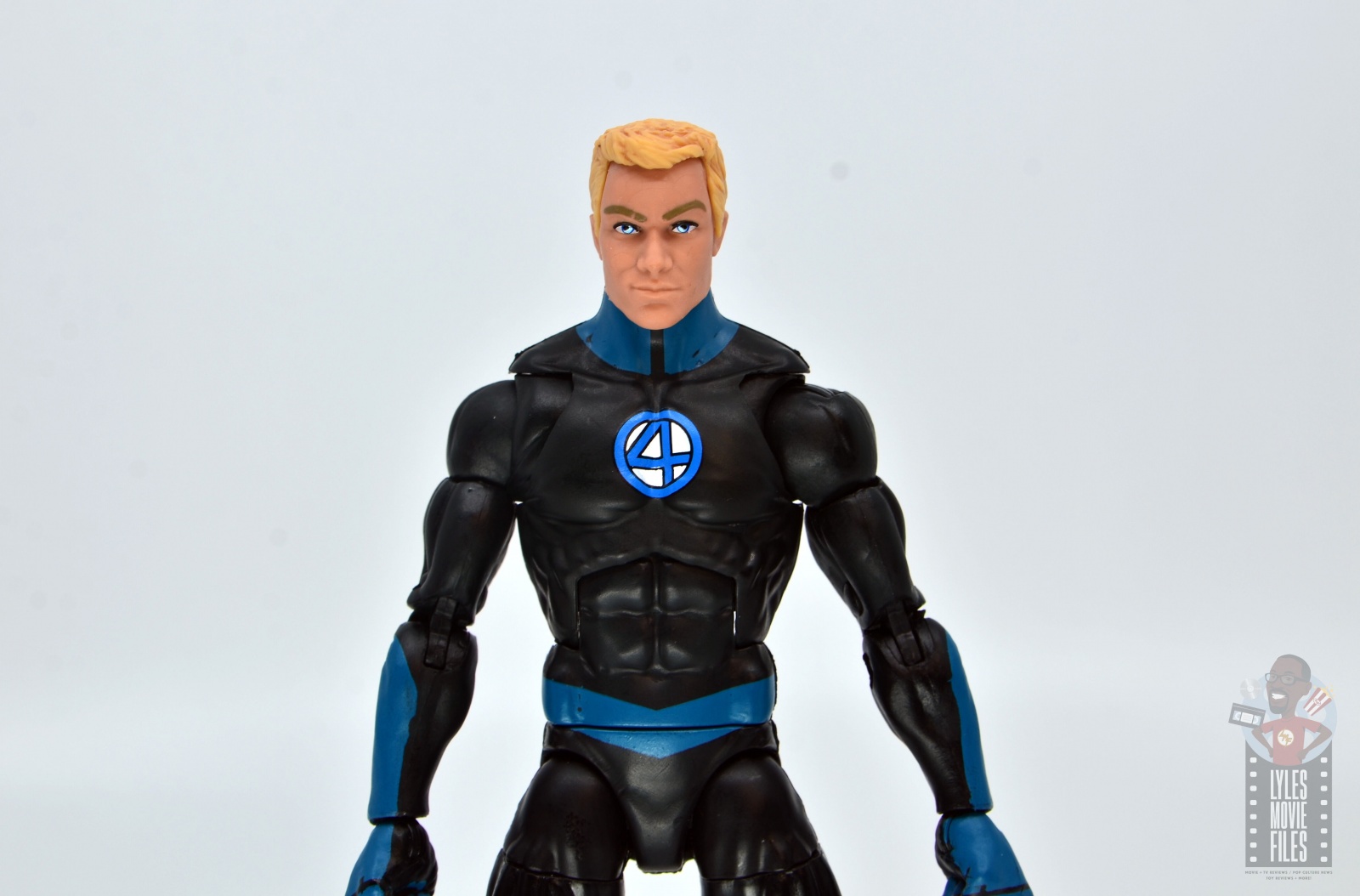 Scale:  Scale on the FF tends to vary depending on who’s drawing them. 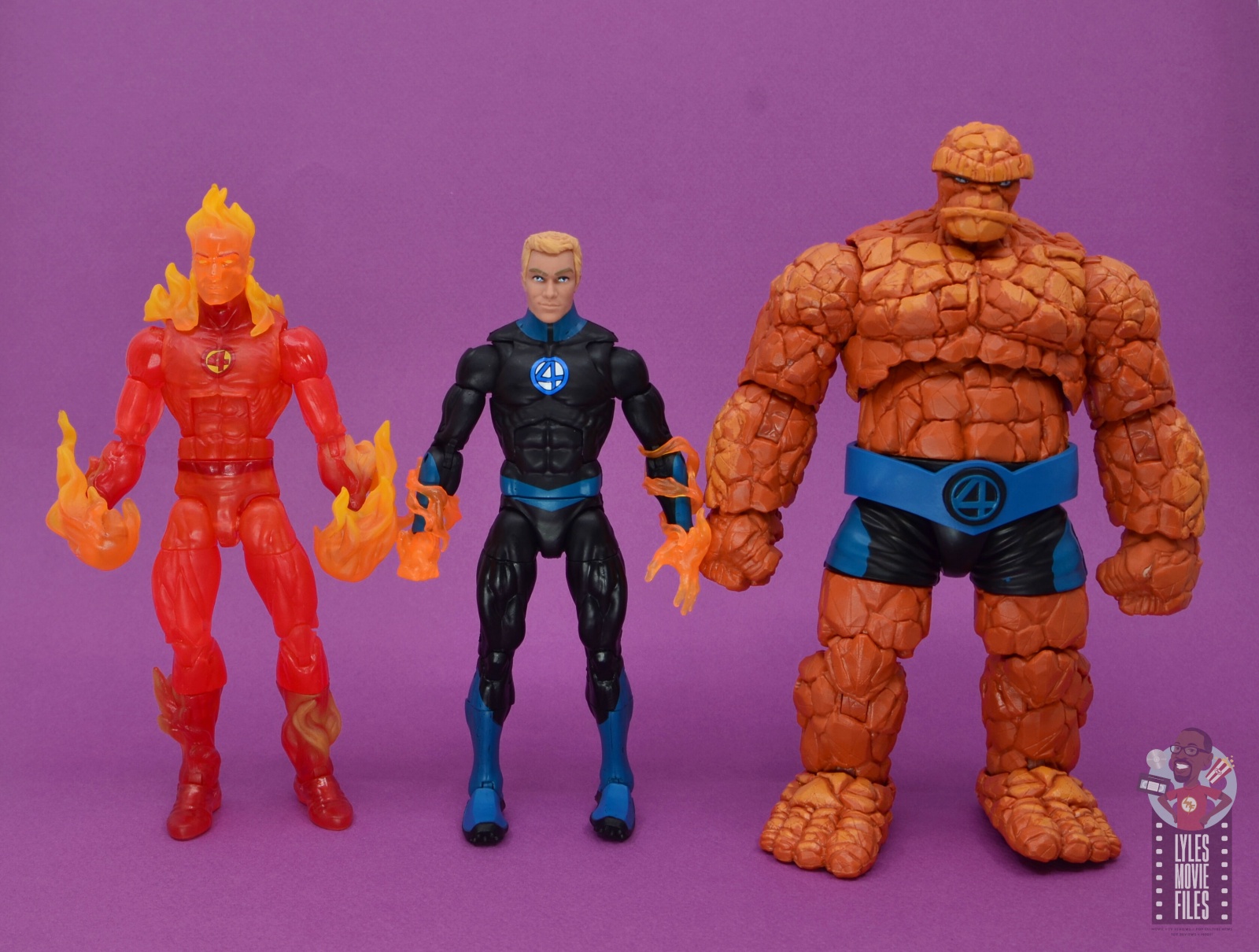 Typically, Johnny is drawn a little shorter than Reed although he’s fine to be more muscular since Johnny is the kind of guy who’d like to be fit for the ladies. 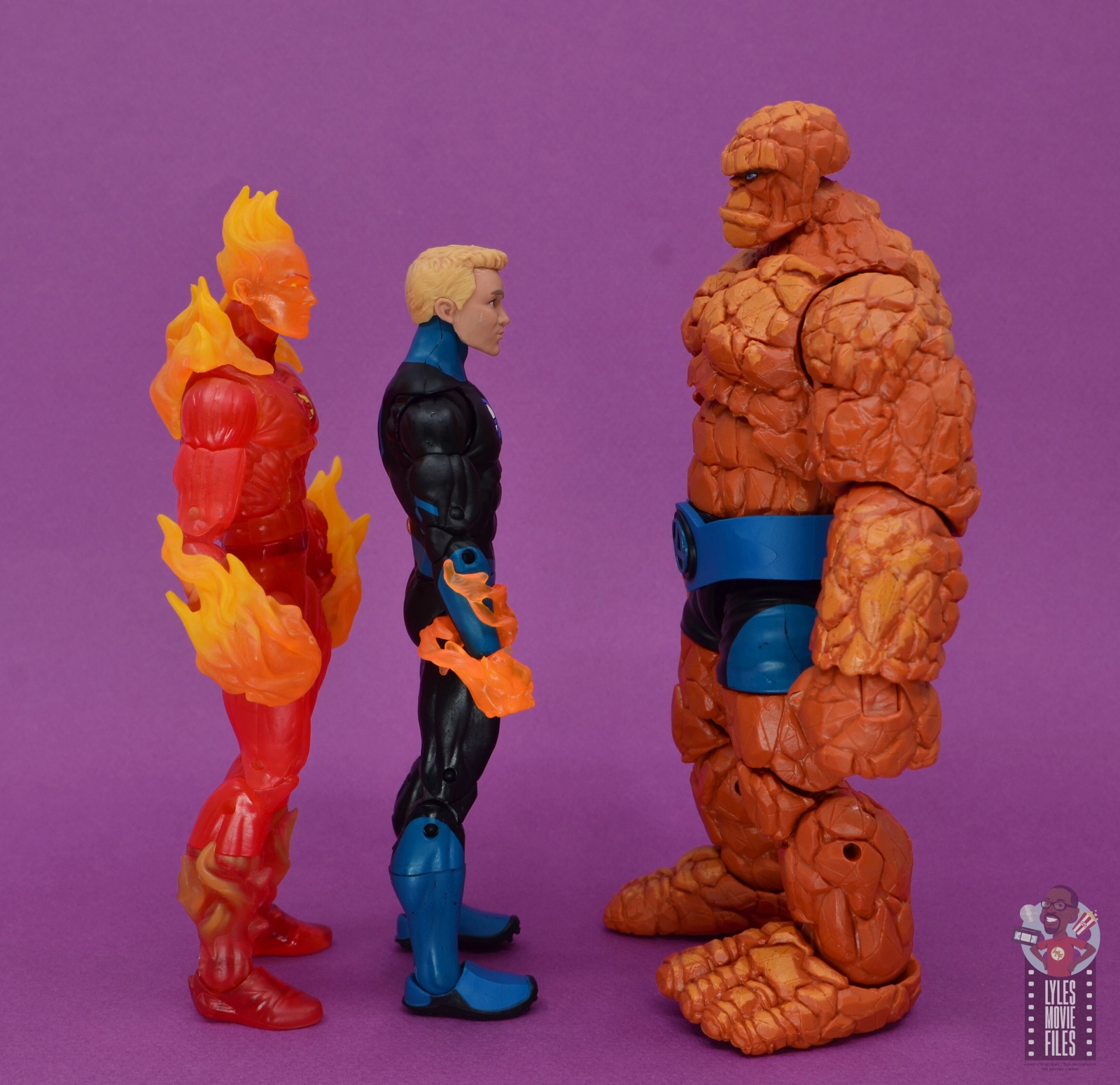 Articulation:  Johnny uses the Sunfire mold, which should be a must for every energy-projecting character thanks to the butterfly joints. It’s nice to have a powered down Johnny even though he won’t be in a ton of action without flaming on. 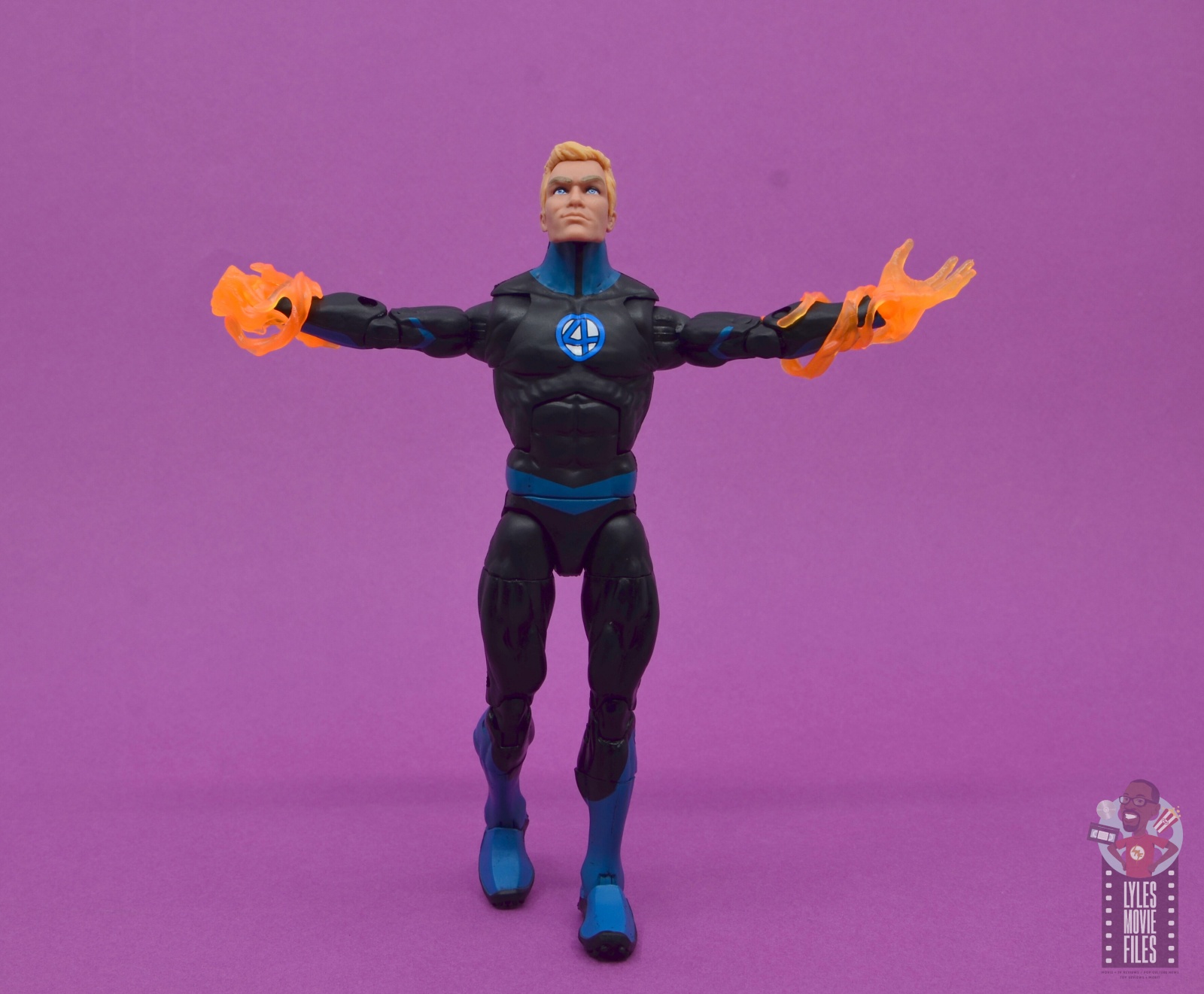 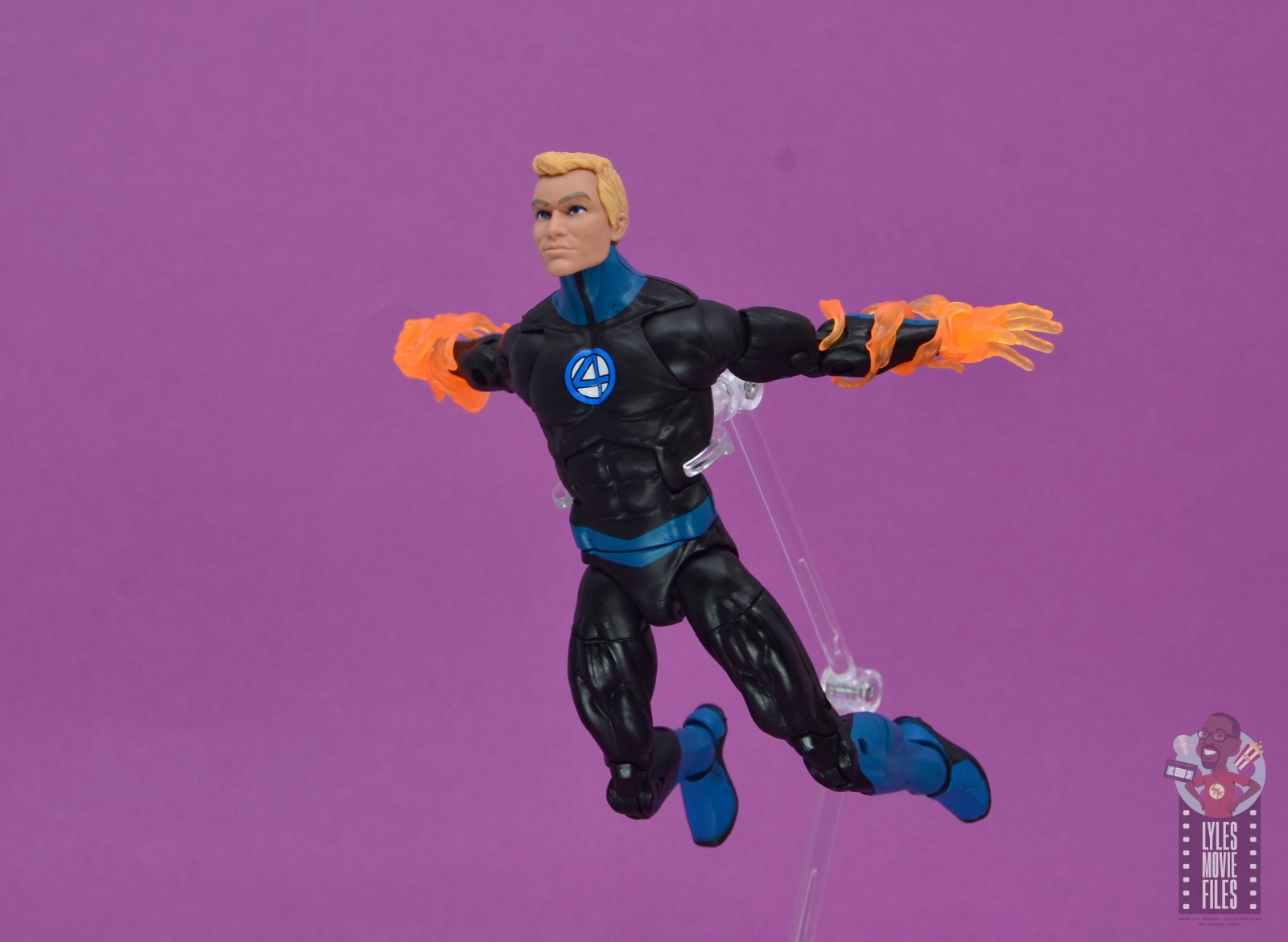 I like having the option of posing him however I need including sitting in my imaginary Fanastic-car. 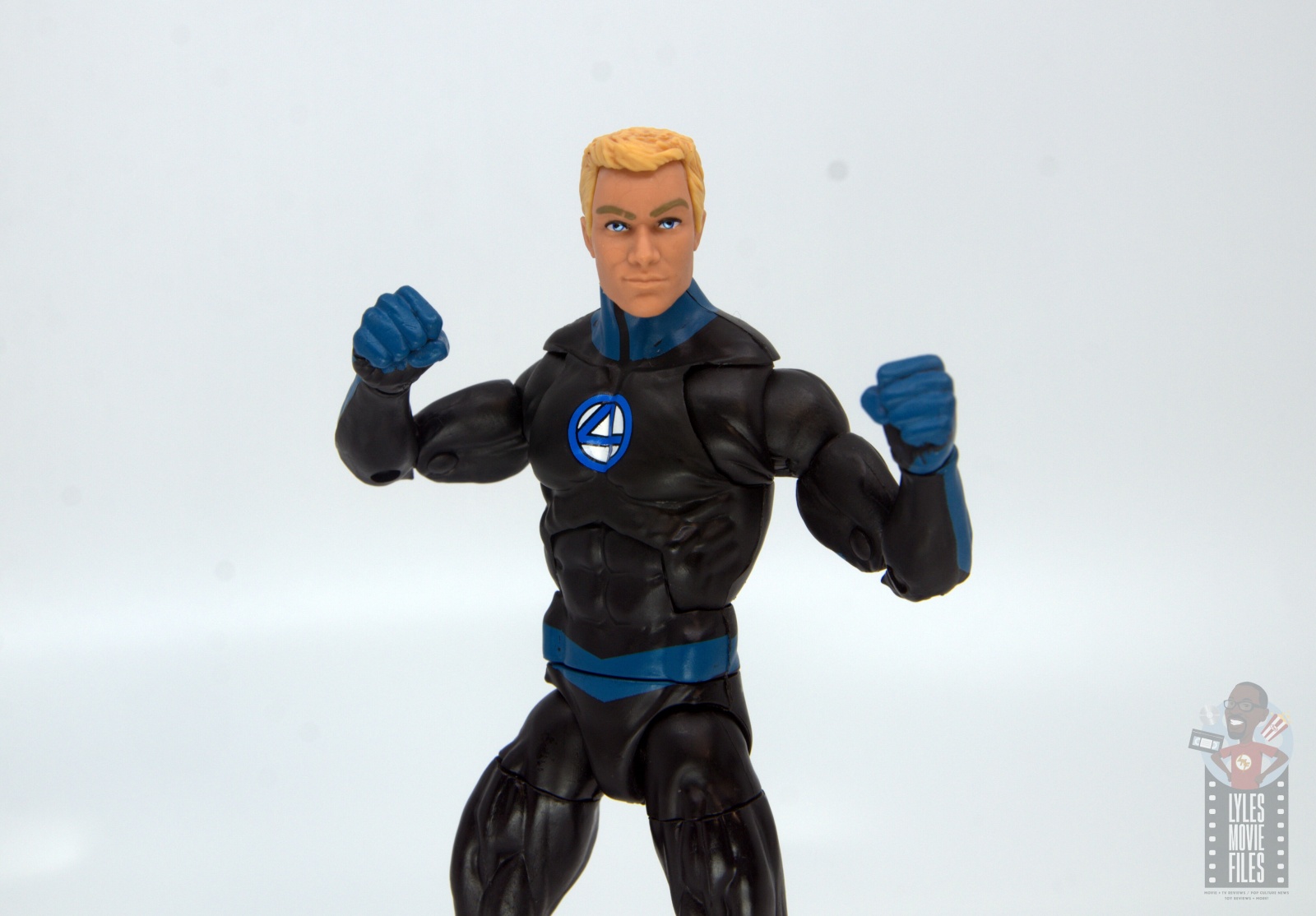 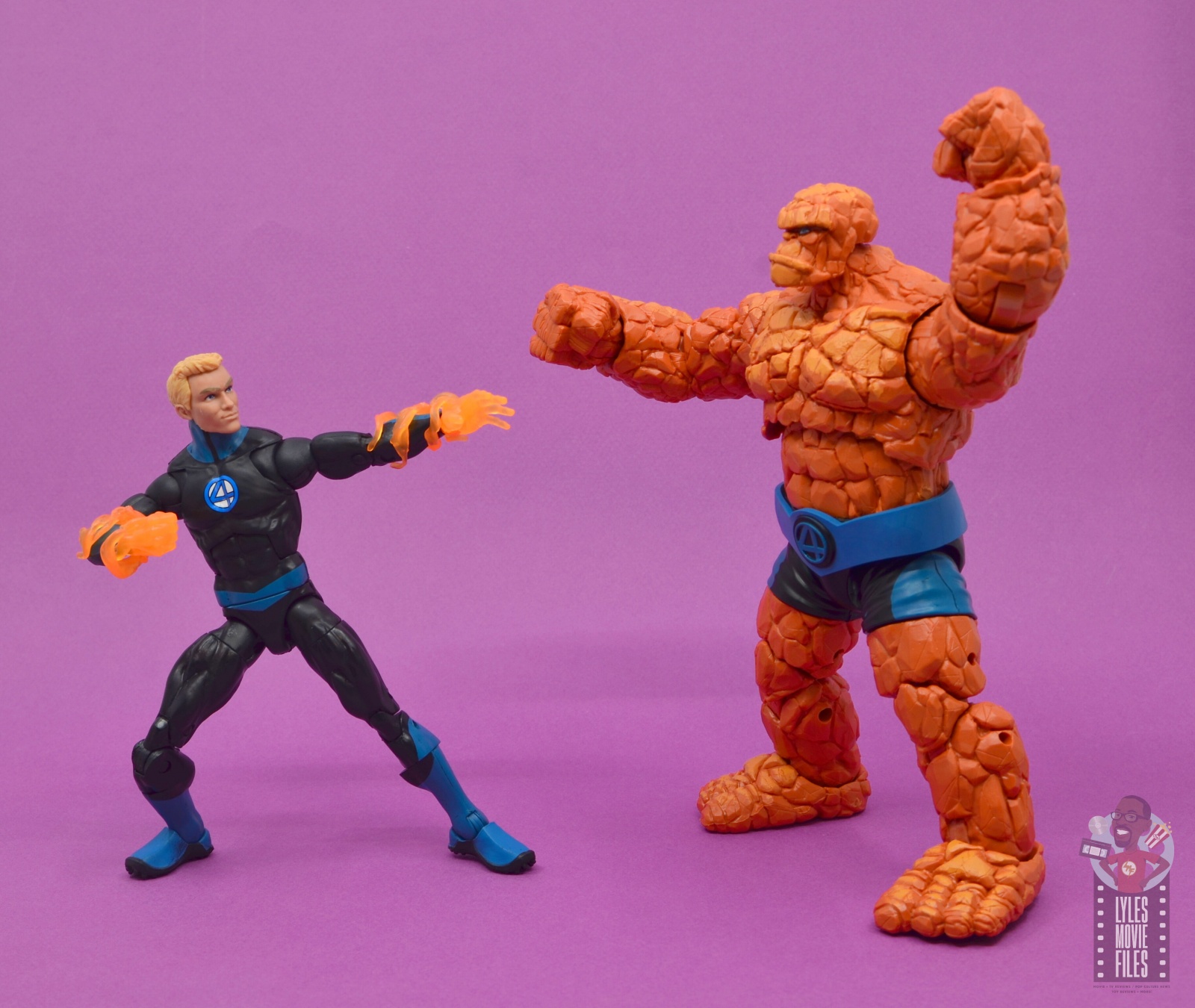 Accessories:  Johnny comes with two alternate flamed on hands. They’re made of translucent material that does a nice job of illustrating the powered up effect. There’s also two smaller flame trails to wrap around his hands/arms. They’re nice effect pieces and are probably what I’m going to keep as the default since they look so cool. 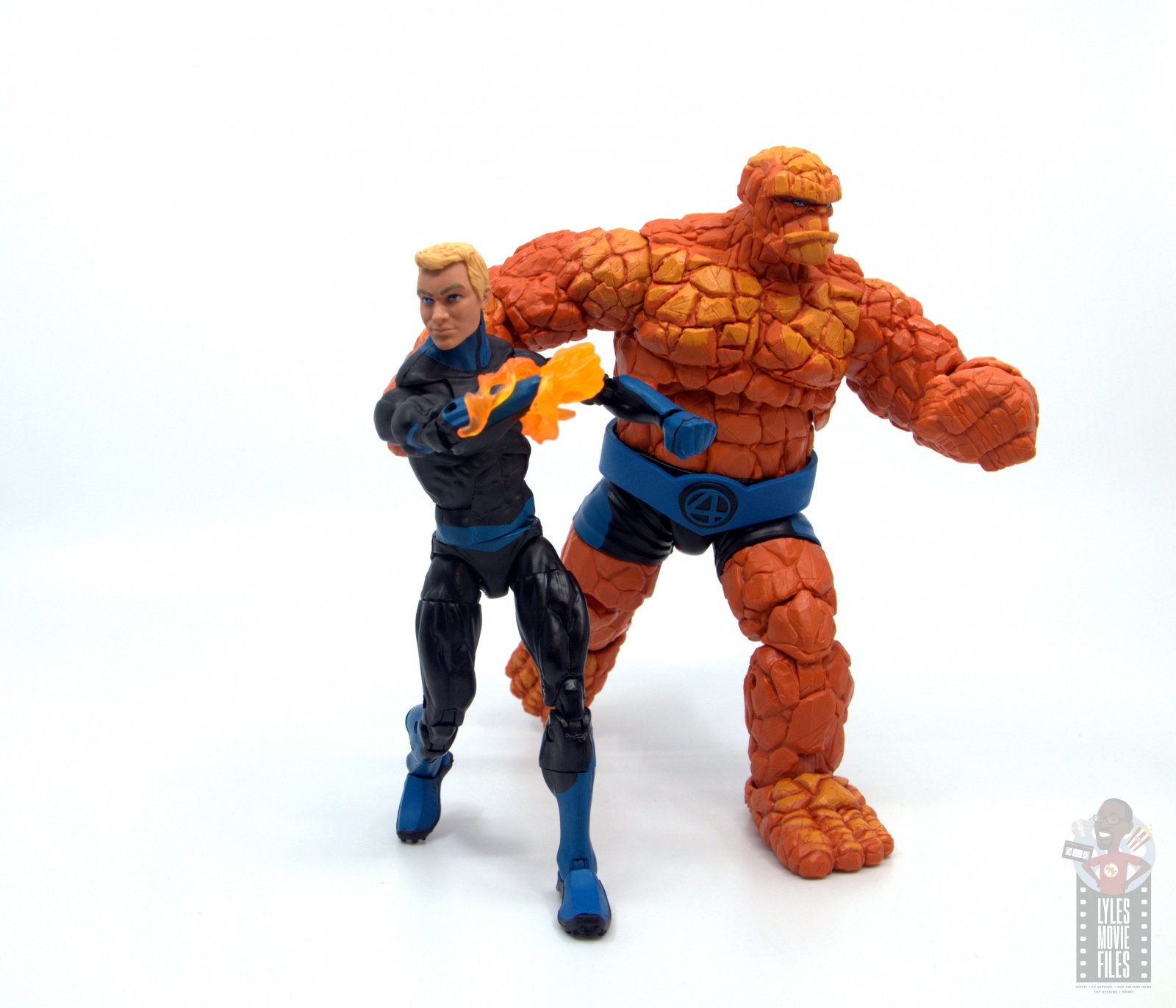 Additionally, he comes with the standard right arm for Super Skrull as well as a powered up Thing arm along with a flame effect to showcase two of the FF’s powers. 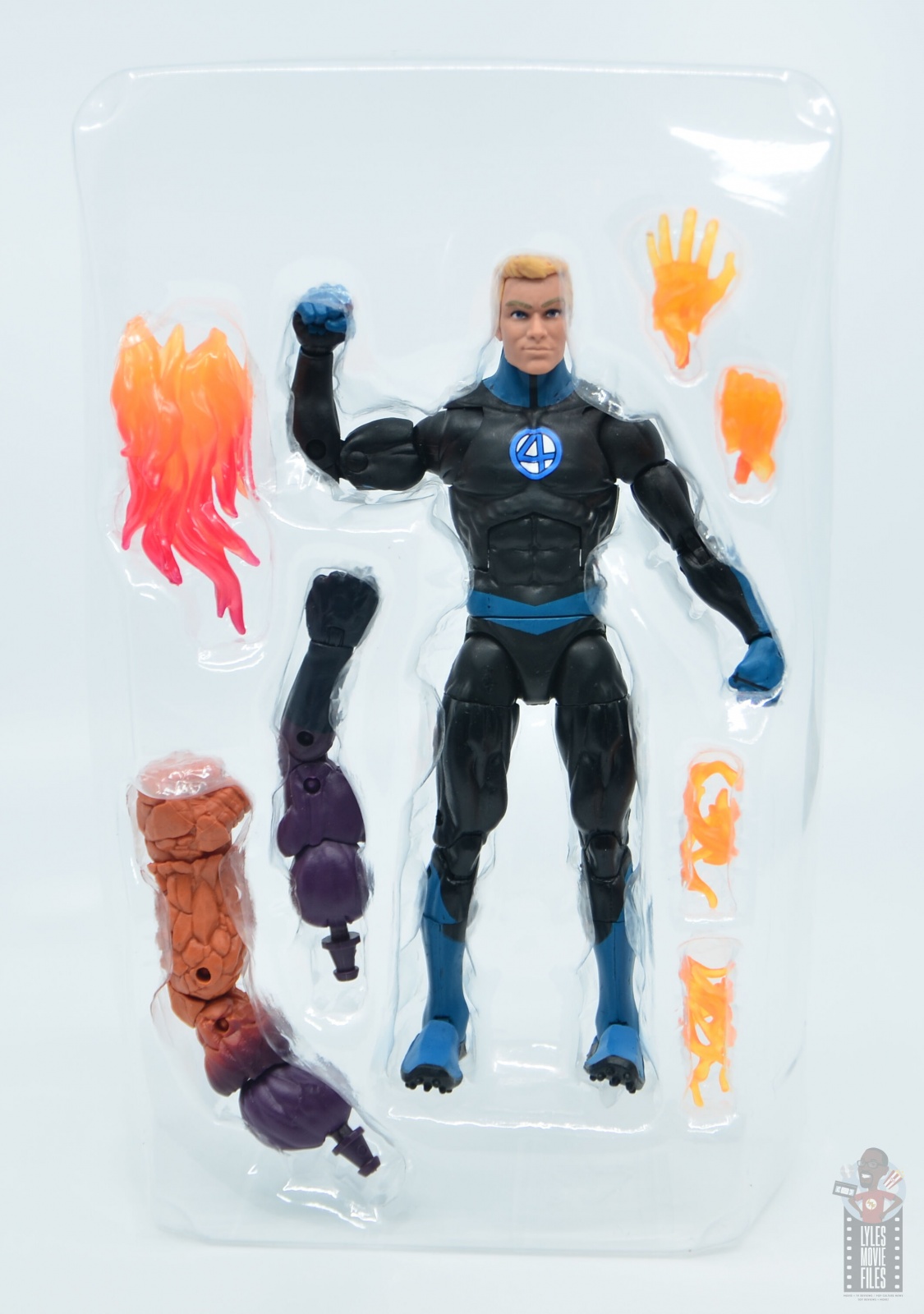 Worth it?  I feel like if you’re going to have the Fantastic Four you need both versions of Johnny. The modern team gets an extra bonus with this figure since the Walgreens Human Torch works just fine with this team. 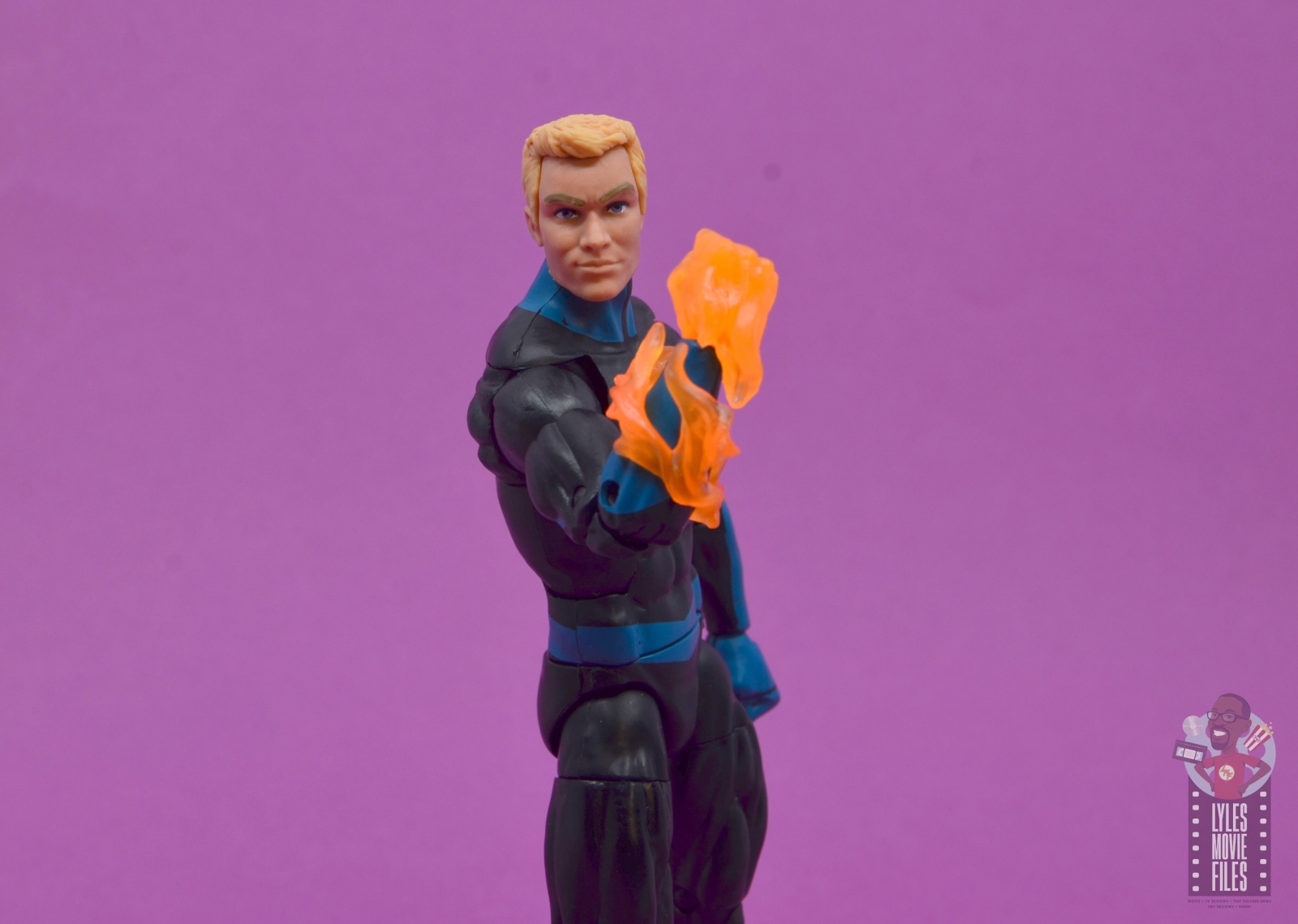 Where to get it?  I found the wave at Target, but people have also found them at Wal-Mart and GameStops. You could also go the Amazon, Entertainment Earth and Hasbro Pulse route.