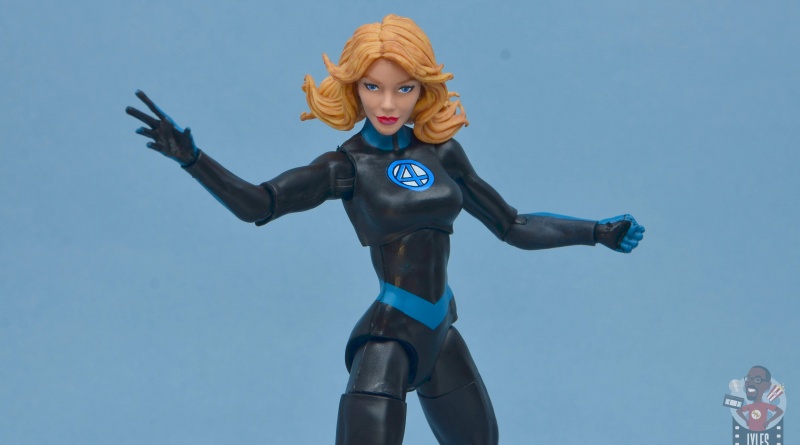 You know what? I actually kinda like these modern Fantastic Four costumes. Of course, I might not feel that way if these were the first ones that Hasbro released. I’m wrapping up the latest Marvel Legends FF with Invisible Woman in a reversal of my review roll-out of the Walgreens exclusive set. And it’s pretty cool to have them in one assortment with zero delay. Let’s see what I see with this release.

Packaging:  I’ve loved the portrait art for everyone except for Sue, who looks like a 50-something soccer mom. 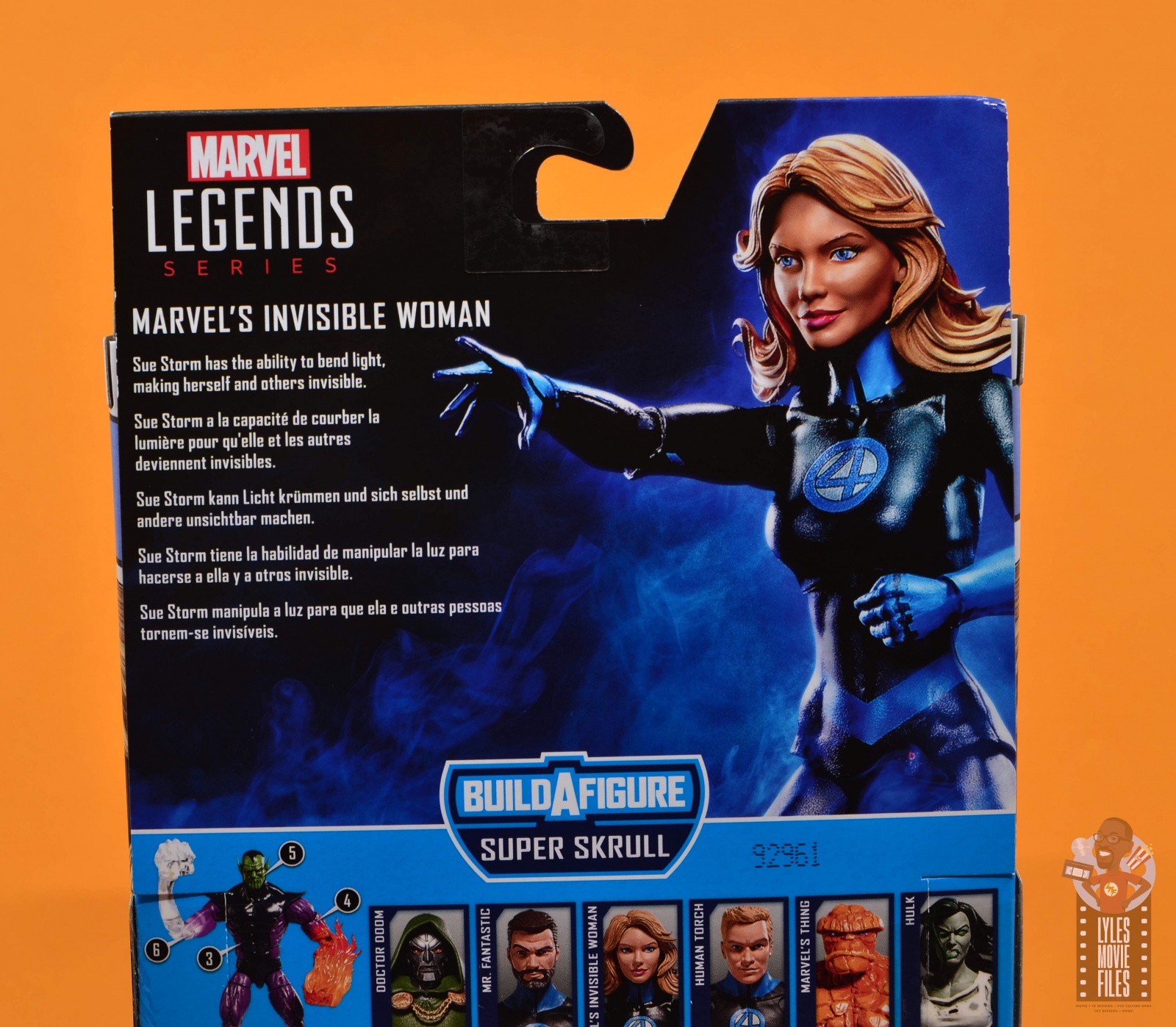 Again, there’s no mention of the Fantastic Four just a quickie breakdown of her powers. 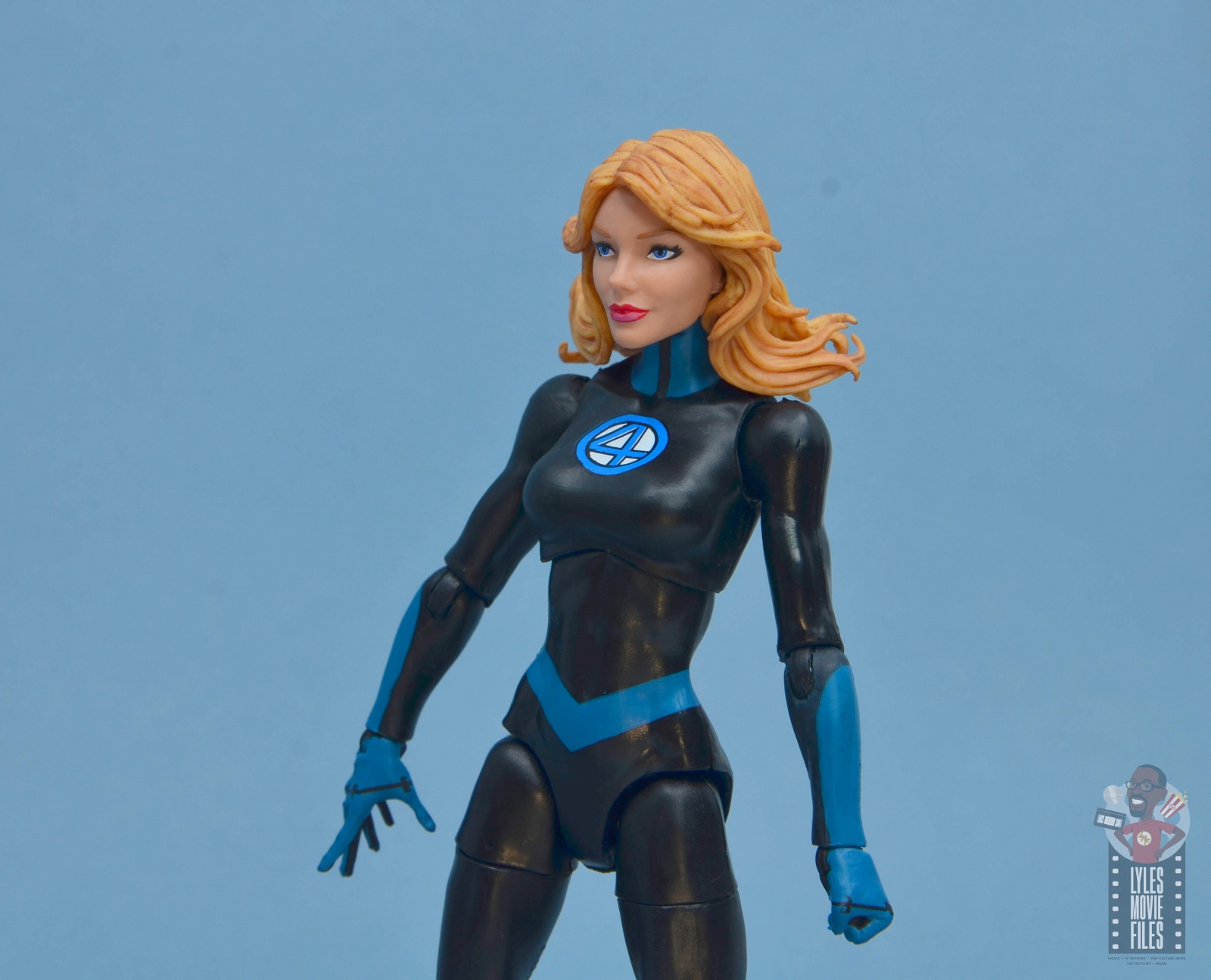 Likeness:  Like Reed, this seems like the same figure as the Walgreens version with longer, flowing hair and this angular modern boots complete with their bottom tread.

Maybe her face is a little wider, but I’m not sure if that’s an illusion from the hair and paint job.

Sue also has a fist instead of an open hand. We tend to get a lot of gesturing hands for female figures, but it makes sense for Sue. I wouldn’t have minded a gesturing left hand as well. 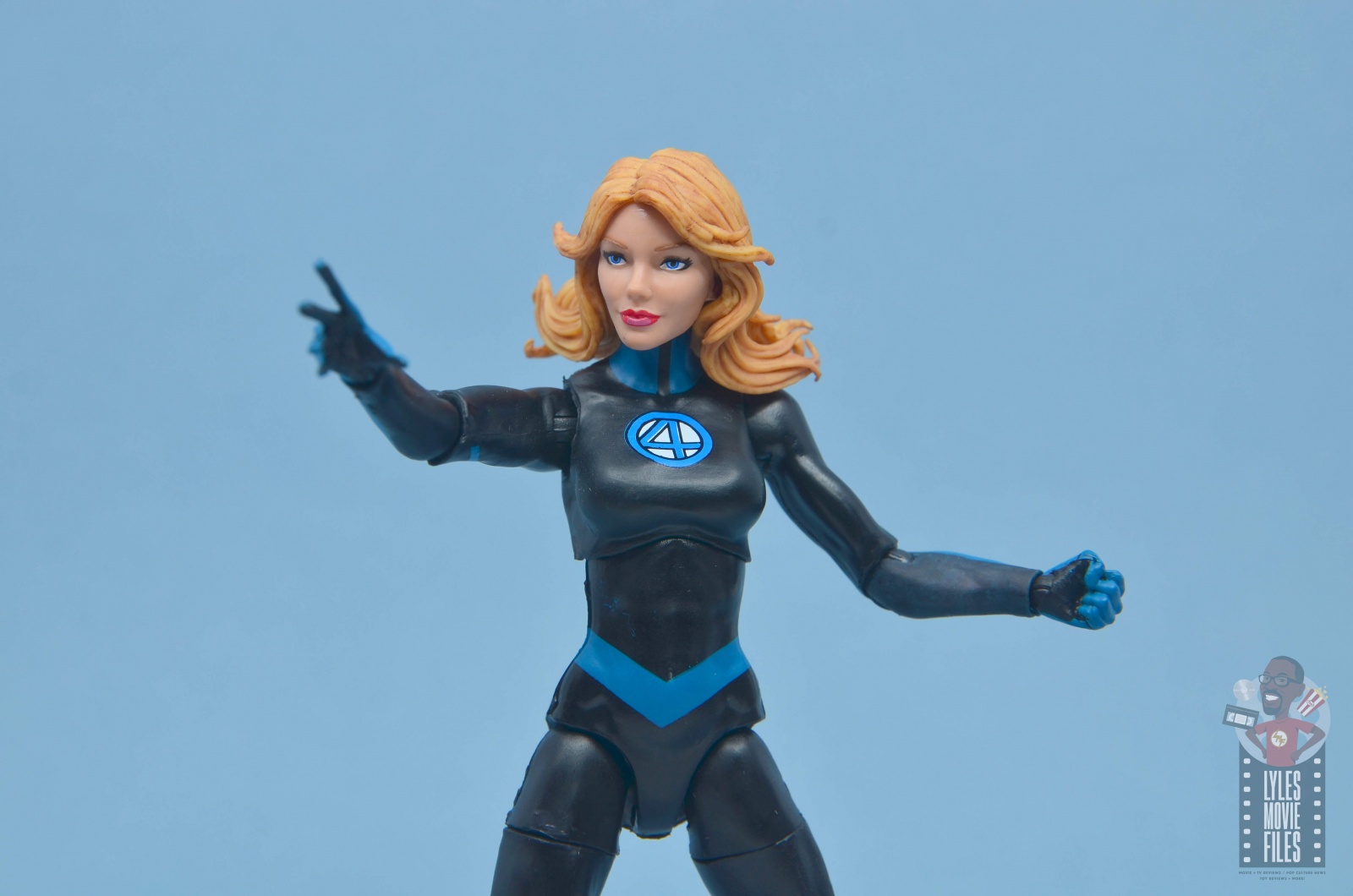 Paint:  I wish the uniform details were sculpted as there’s only so much the paint can do. It’s pretty good although you can see some slight imperfections. Nothing major of course, but you might want to check carefully if you’ve got the option.

Scale:  The new boots give Sue a bit more height than the previous figure and she’s almost looking Reed eye to eye as a result. 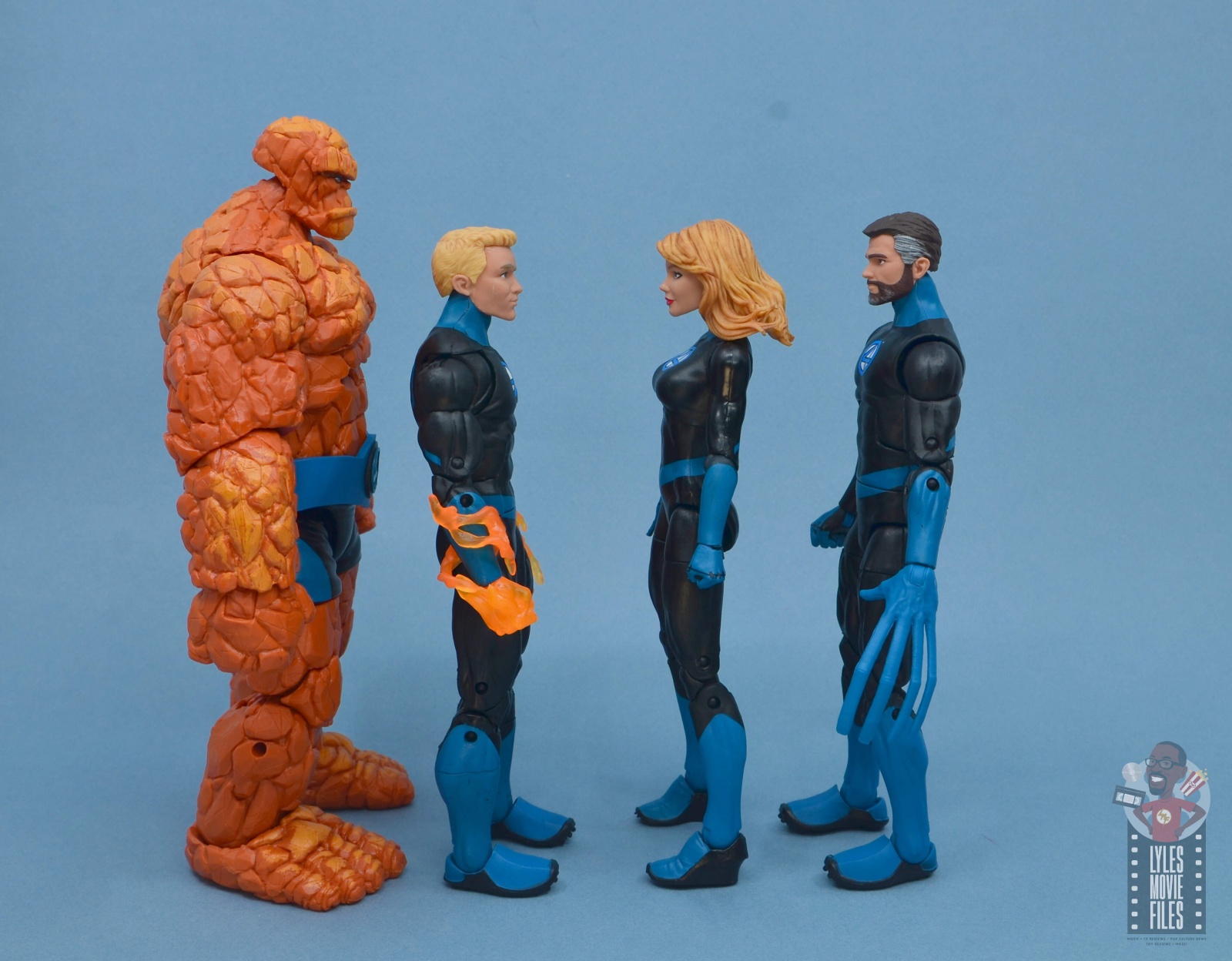 She could be shorter, but it’s not a Scarlet Witch situation where she towered over earlier Vision figures. 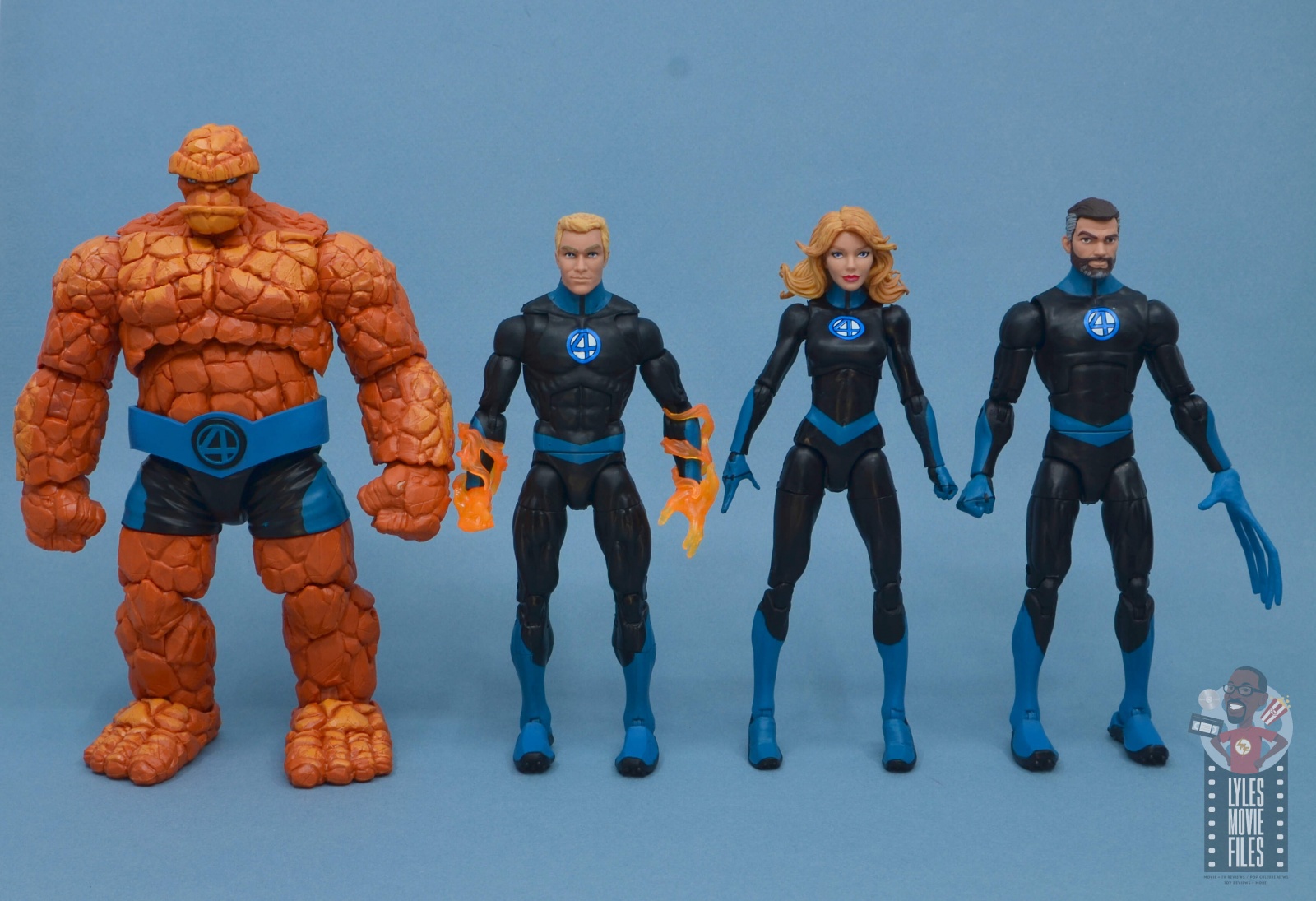 Articulation:  Sue naturally lacks the bicep and waist articulation, but in every other area she moves fine. 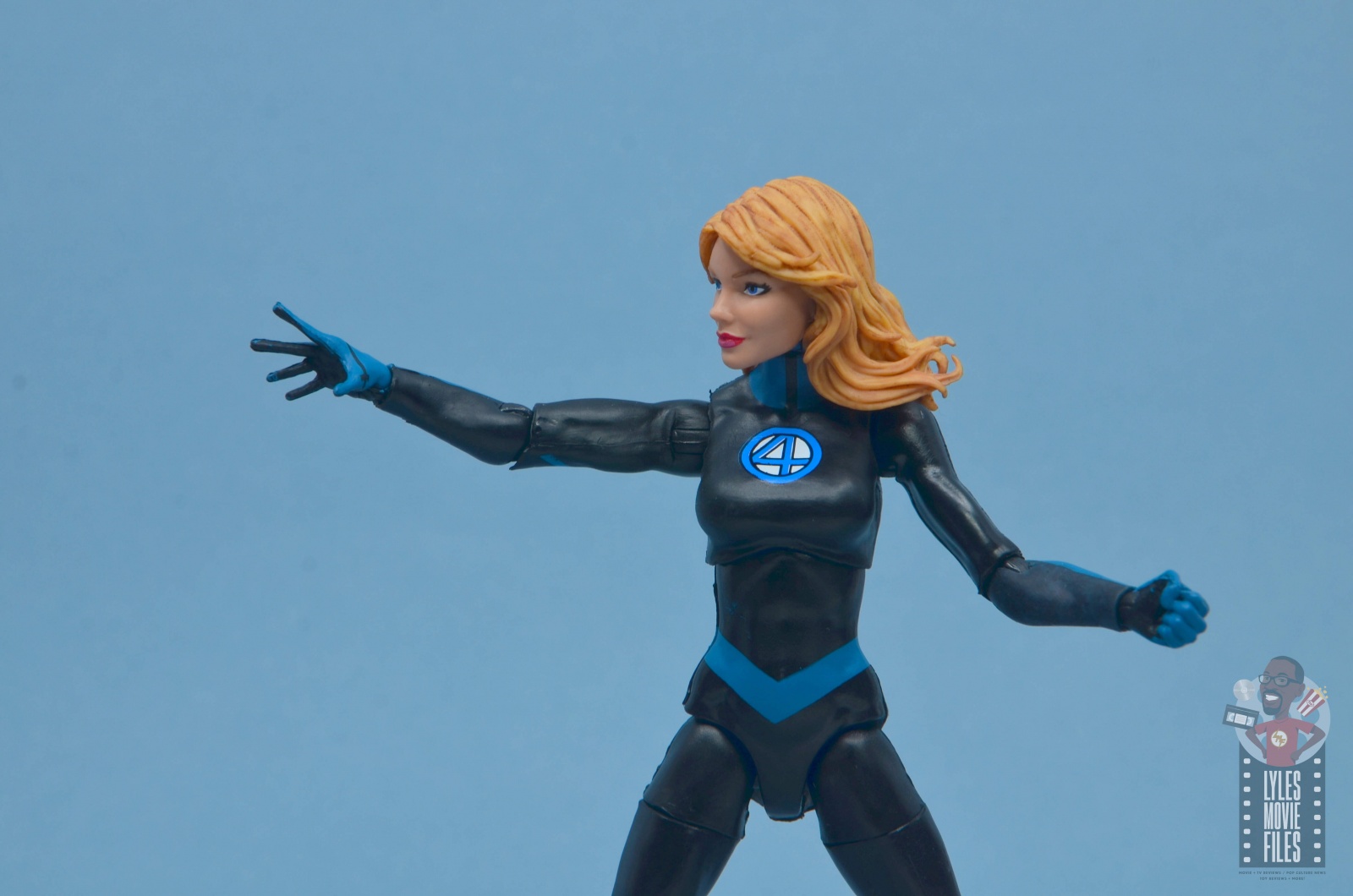 The hair doesn’t restrict her side to side movement nearly as much as I’d thought and she can hit some nice poses. 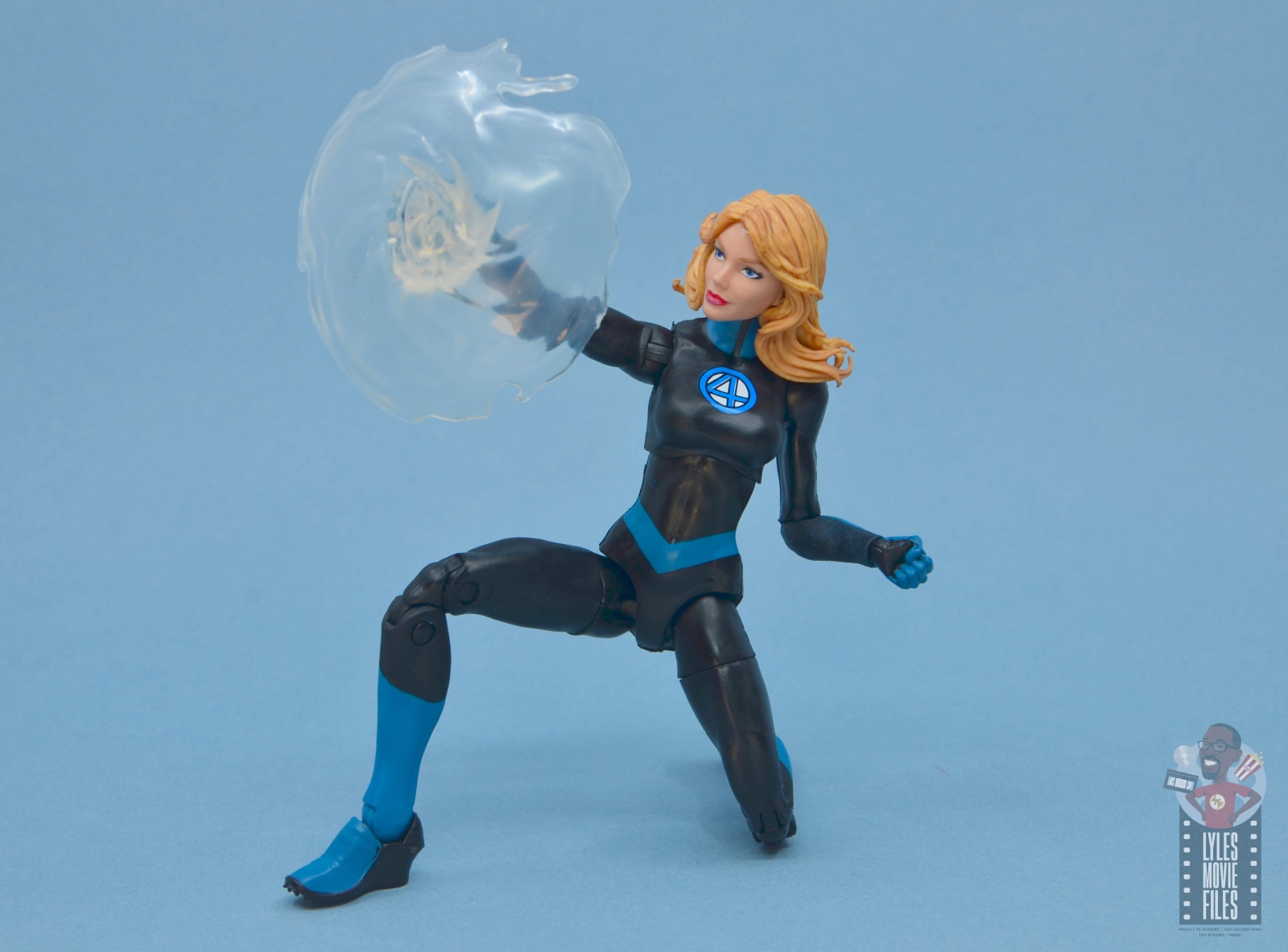 The boot tread doesn’t do much to help her stand on one leg any better, but I had some fun posing her with the rest of the FF. 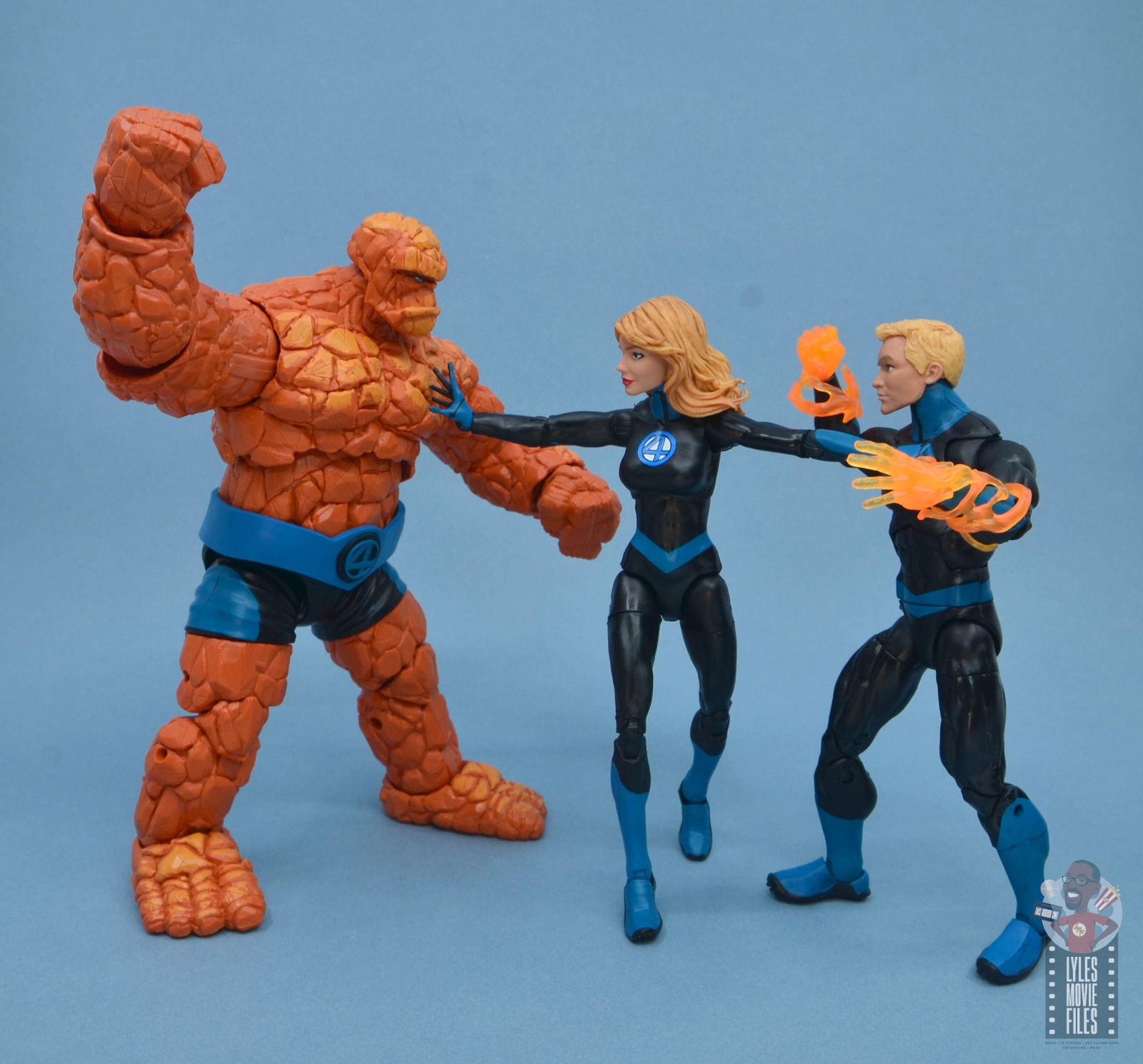 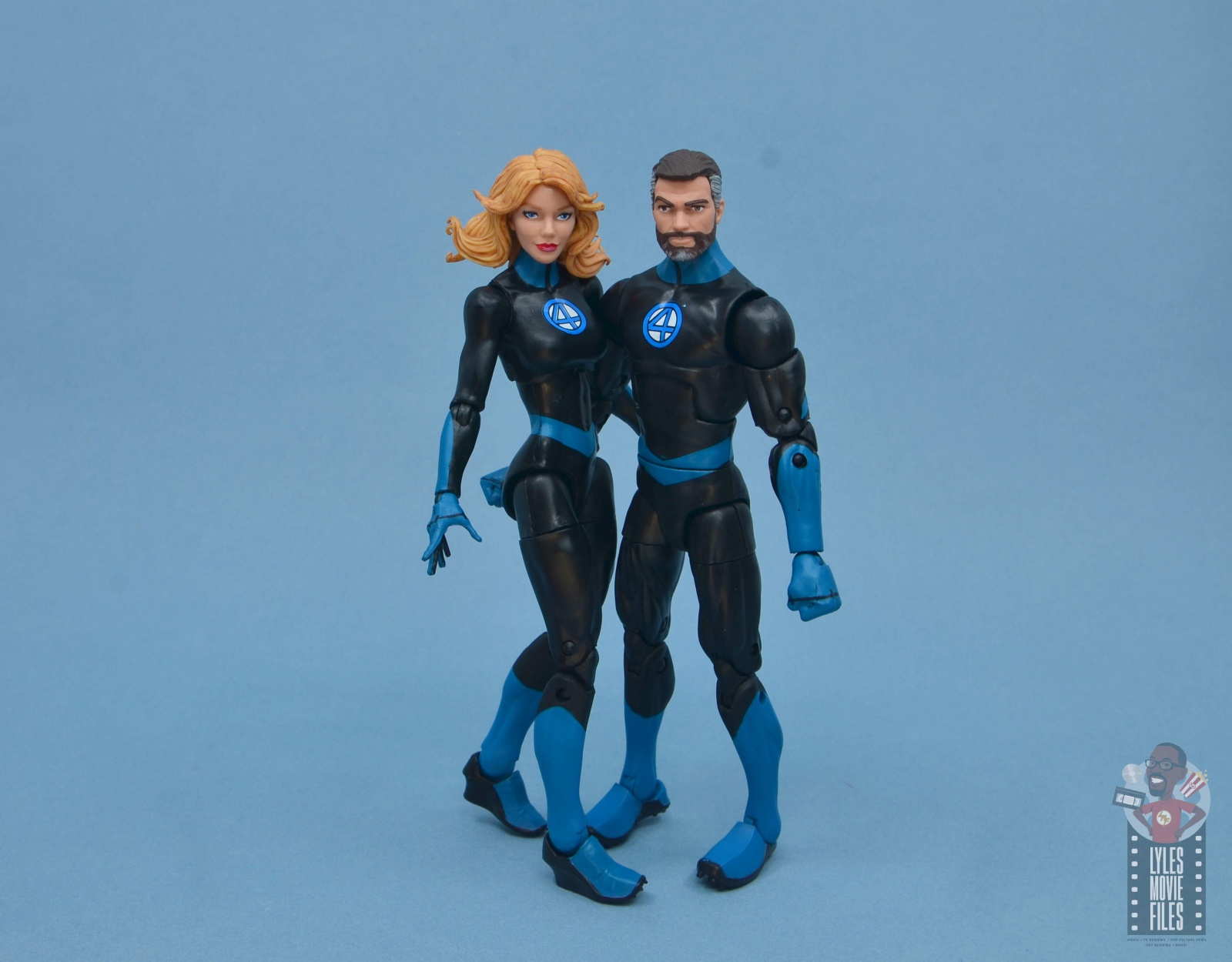 Accessories:  While we don’t get the alternate regular arm for the Walgreens version, we do get a newer accessory in a transparent shield that fits on her right hand. That can work with the Walgreens figure as well. It’s kinda like Invisible Woman in mid shield creation. It’s a nice idea at least and I always appreciate getting new power effect pieces. 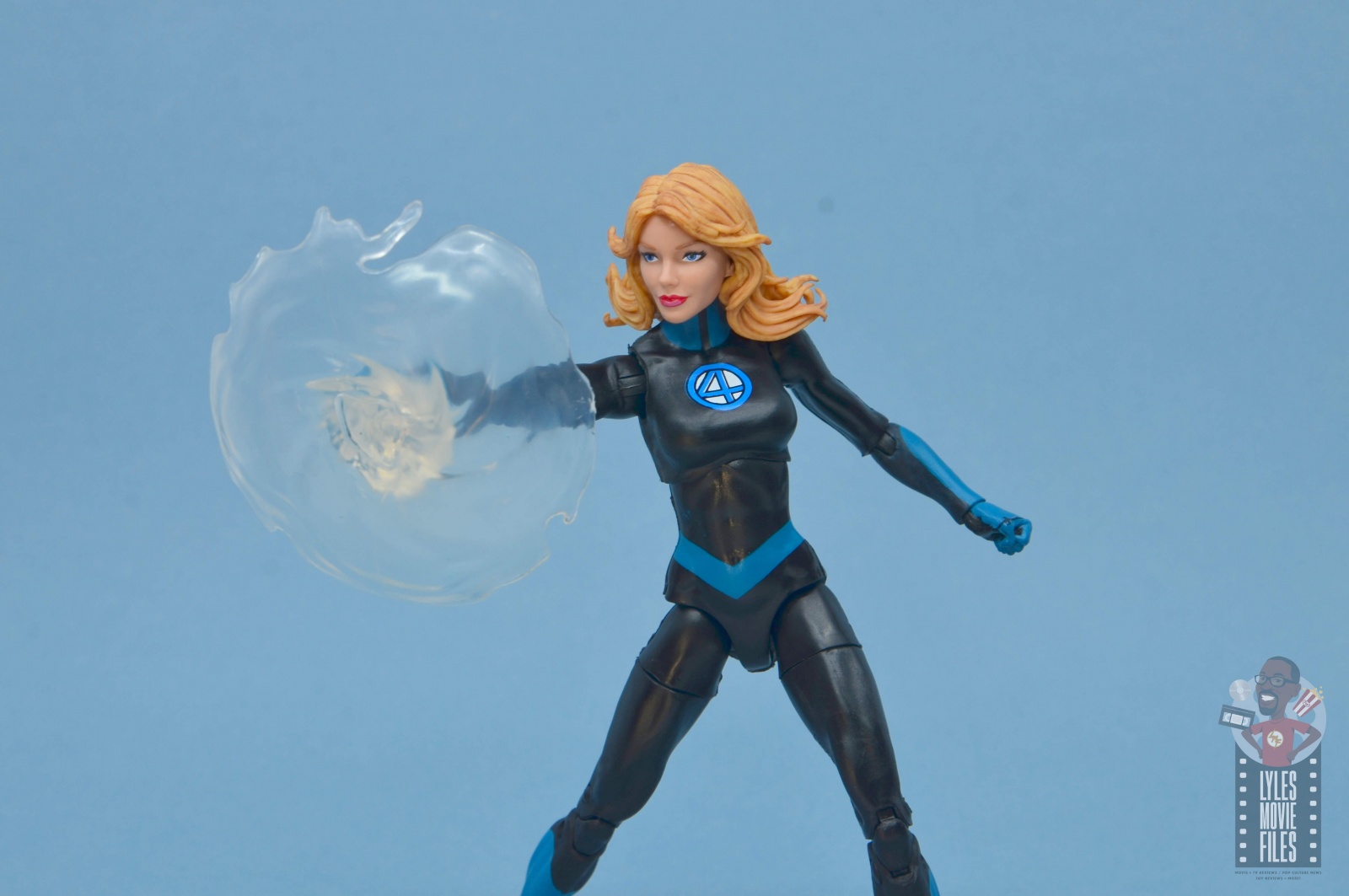 Additionally, she comes with the torso for the BAF Super Skrull. 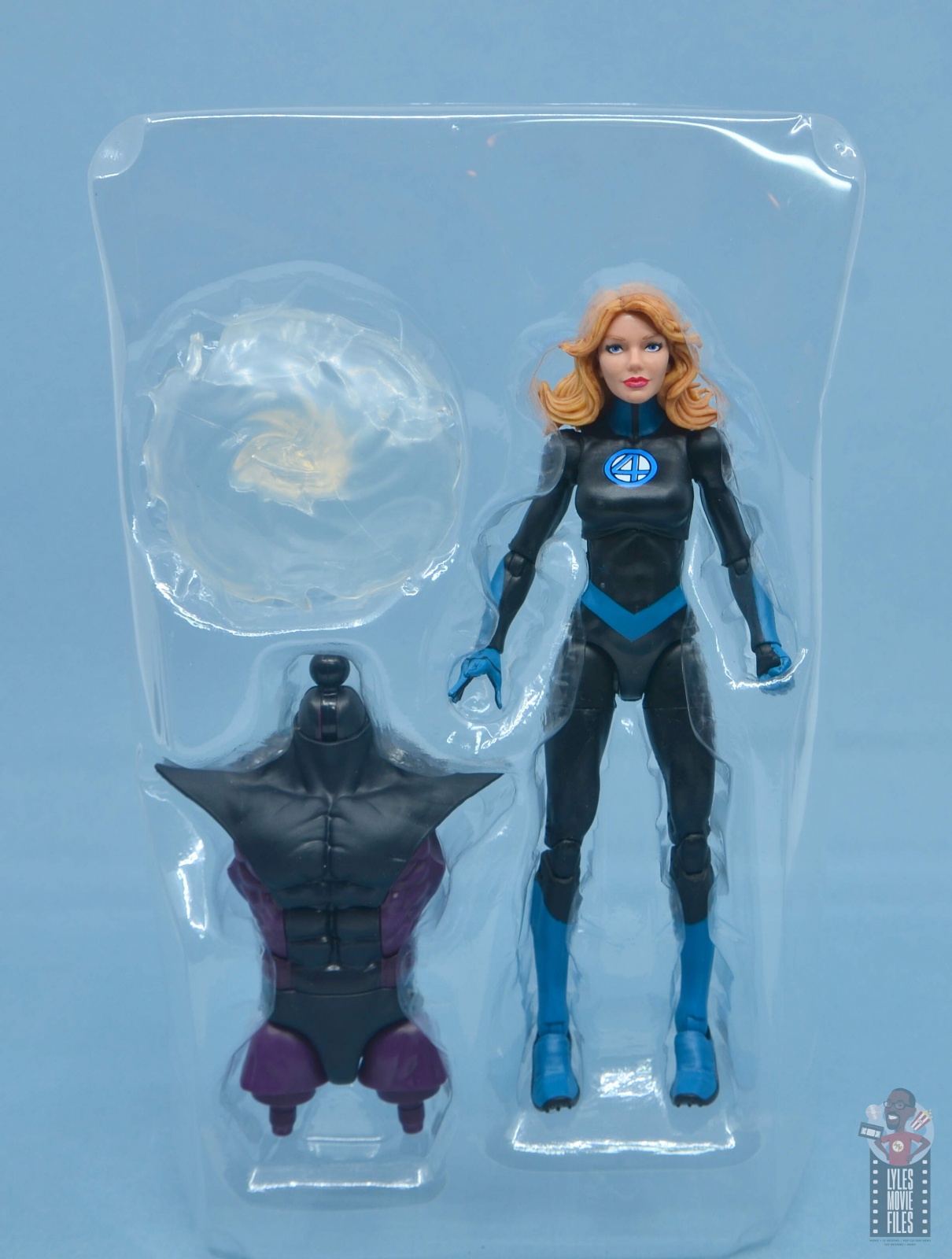 Worth it?  Sue was $20 when I grabbed her and she seems to be the one that’s regularly the most expensive. Invisible Woman isn’t the most expensive of the Walgreens crew, but I think the BAF is driving the cost up here. Bottom line, I wouldn’t wait to get her for a better deal.

It is pretty cool having this whole team together and I like this Sue a lot. Assuming you weren’t attached to the classic looks this is a really nice Invisible Woman. 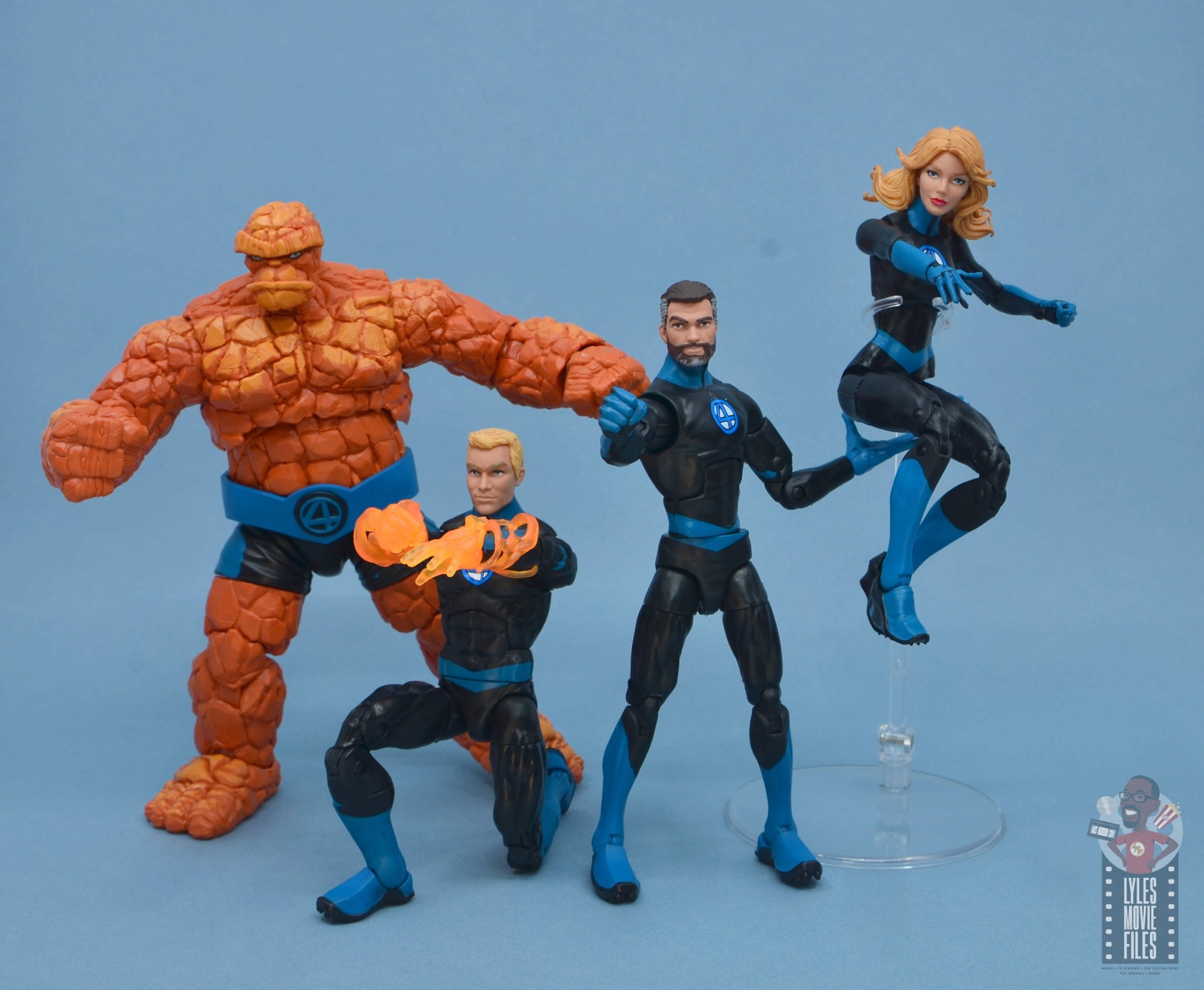 Where to get it?  I found the wave at Target and you can also track them down at Wal-Mart and GameStop. You could also go the Amazon, Entertainment Earth and Hasbro Pulse route.