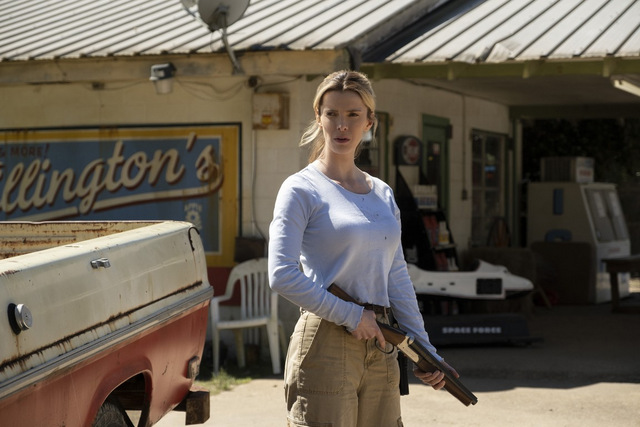 Originally slated for a Sept. 27 release, The Hunt was delayed after a pair of mass shootings would have made its theatrical opening in poor tastes. Now with the COVID-19 virus legitimately scaring off moviegoers for its new release weekend it’s hard not to wonder if this film isn’t just snake bitten.

For those that do see the film they’ll find a satire that tries to find a balance spoofing both conservatives and liberals in a Hunger Games style environment. Perhaps surprisingly, the good guys and bad guys aren’t necessarily the ones you might think. I love how different readers are totally going to read that in various ways. 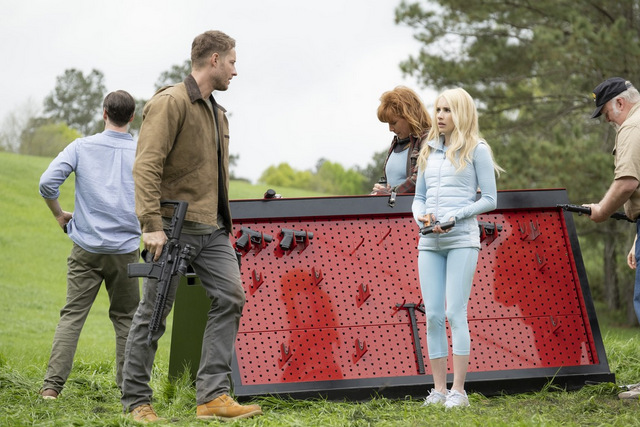 A group of strangers awakens to find they’ve been dumped in the woods with a crate of weapons. These strangers have been assigned code names like Yoga Pants (Emma Roberts), Big Red (Kate Nowlin), Dead Sexy (Sylvia Grace Crim) and Trucker (Justin Hartley, This Is Us). One by one the strangers start getting gunned down, impaled and blown up for their misdeeds in the real world. Their executioners, led by Hilary Swank, consider their actions a matter of public service.

Only problem is one of the hapless strangers, Crystal (Betty Gilpin, GLOW) isn’t quite the defenseless easy mark they assumed and starts fighting back. Gilpin makes a strong case to be one of the great action stars of the next decade if she chooses. 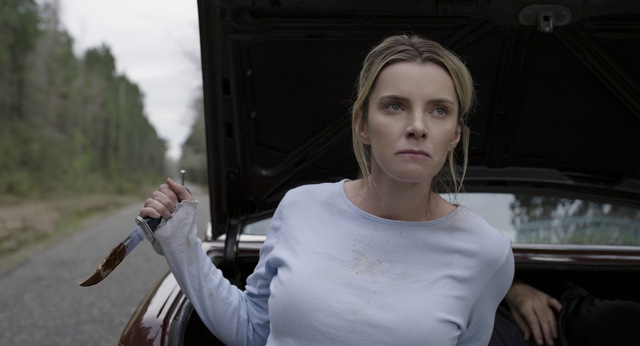 She shows a strong comfort level with the physical nature of the role and gives some of the more authentic, natural expressions I’ve seen in a performance in a long time.

Gradually encountering fellow survivors, Crystal has some allies in her effort to escape the clutches of her pursuers. Some of the intensity of the survival estate feel of the film gets lost when the survivors flee the killing grounds. It’s all for the sake of a larger gag, but in hindsight the payoff wasn’t worth losing that sense that at any second a character could get killed.

Director Craig Zobel goes in hard and heavy with the action sequences. The violence seems to be intentionally gratuitous as if to show the worst case scenario of a war of words and ideologies turning violent.

Some of the death scenes have a sort of dark humor to them like Ready or Not while others seem somewhat cruel. A reveal late in the film attempts to change some audience’s perspectives on if the victims actually had it coming.

The final standoff between Gilpin and Swank is a must-see spectacle. It’s probably the most memorable woman vs. woman fight since Uma Thurman and Vivica A. Fox clashed in Kill Bill Vol. 1. 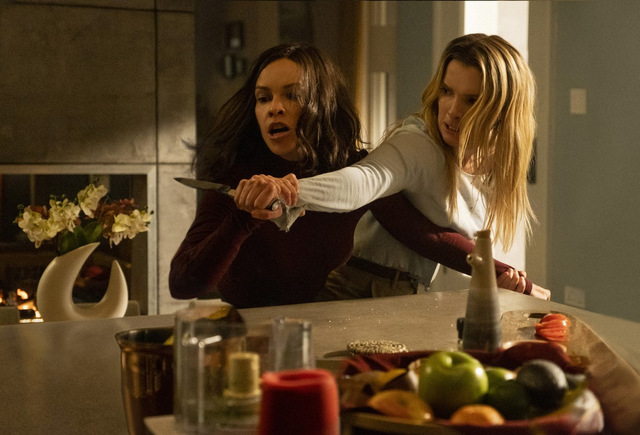 Screenwriters Nick Cuse and Damon Lindelof do get in some good zingers targeting both sides of the political aisle. Whether it’s the crisis actors know-it-all who’s clued in because he has a podcast or the group debate about including a black guy to be more inclusive.

Upon any long-term observation, the plot really doesn’t make a heck of a lot of sense. Why go to the trouble of creating fake sanctuaries close to a train station people could hop on and escape? And why go through the trouble of arming them in the first place? Some of the film’s broader strokes needed to be filled in better to really make it work as a smarter satire.

And as non-committal as Cuse and Lindelof want to be, this is the kind of premise that needs an outright hero and villain. The shades of grey approach where most of the characters are caricatures is funny, but fails to provide the kind of depth to take the film to another level.

It seems Cuse and Lindelof want to explore Internet culture and misinformation, but aren’t able to add anything new to the conversation with their stay squarely in the middle approach. 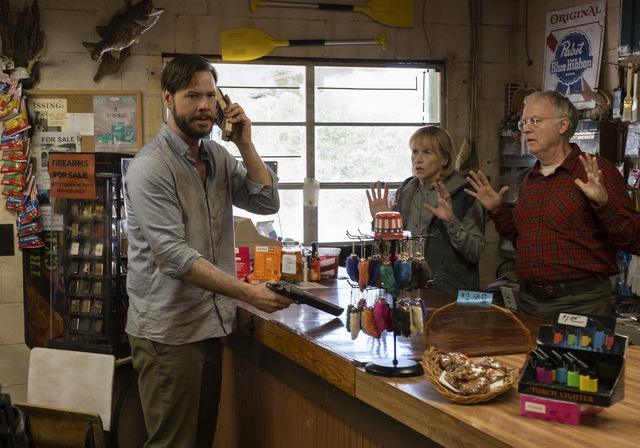 As a wild, brainless spectacle, The Hunt is pretty entertaining, but as a commentary offering anything deeper its hot takes on society are hardly worth the outrage.