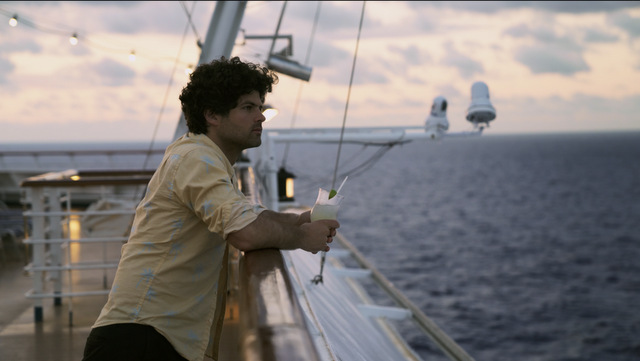 Same Boat is one of those cool concept, lackluster execution films that capsizes what could have been a very clever and fun film.

In the 29th Century, time travel has been achieved and assassins are killing off threats to humanity. This is the would you kill Baby Hitler argument come to life. It’s an interesting subject matter although seemingly a tricky one for the basis of a romantic comedy.

One of the biggest issues with the film pops up immediately upon the arrival of the assassins James (director/co-writer Chris Roberti) and his apprentice, Mot (Julia Schonberg). There’s nothing remotely menacing or threatening about either. It’s not like James needs to come in with a denim jacket, shotgun and killer shades, but with his mop top hair and dress like he got a little too casual for the office casual day, he’s not exactly the most imposing killer.

Will Smith and Tommy Lee Jones don’t have a monopoly on suits and shades and even just dressing up for more than a picnic could have helped with Mot and James’ presentation. 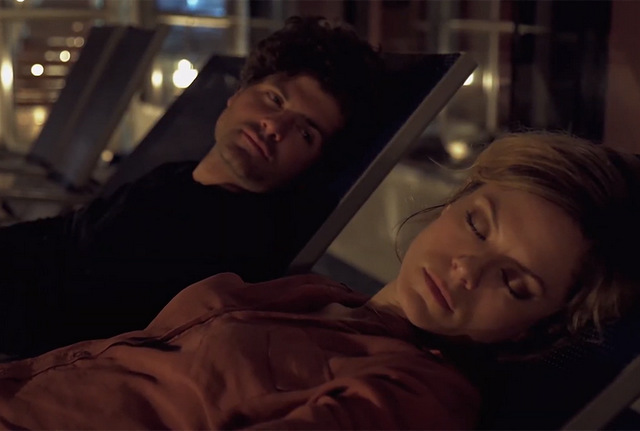 The opening text attempts to explain how James could make any assassins guild by saying the time travel assassination results have been mixed. If nothing else switching up the mentor/apprentice role could have helped as Mot was overworked trying to get the slacker James focused on being a precision and effective killer. Roberti makes James a little too disinterested in his mission and has an odd fascination with fruit. Apparently time travel has been perfected, but at the expense of fruit production?

On their first outing they kill the creators of reality TV so James and Mot aren’t all bad. That was a pretty funny gag and an all-too rare moment of genuine comedy. Roberti and co-writer Josh Itzkowitz aren’t that interested in exploring the moral aspects of these killings, which probably would have gone too deep for a rom-com.

With Mot incapacitated due to sea sickness, it’s up to James to navigate a cruise ship in order to kill a target. Only problem is James becomes smitten with his target, Lilly (Tonya Glanz). Lilly decided to break up with her boyfriend soon after the cruise departs. How do those sleeping arrangements work out?

There’s some oddball supporting characters who add nothing to the film and just add to the annoyance factor. Take a film like Forgetting Sarah Marshall where the supporting characters make the film even better with their quirky antics. Same Boat’s supporting players seem to exist for the sole purpose of not making James and Mot seem so weird.

Roberti and Glanz have chemistry in the pre-destined to get together, not the so compelling you’ll want to see them together kind of on-screen connection. Some of that is due to Roberti’s nonchalant line delivery. He’s not the most engaging performer and makes James seem disinterested in everything that’s happening.

There’s doesn’t seem to have been a lot of thought put into this whole time traveling deal and why James and Mot would target someone on a cruise ship instead of when she’s back home. And upon completion of the assassination do James and Mot have to wait until the ship returns to port? These are the kinds of questions I focused on while the film slowly chugged along. 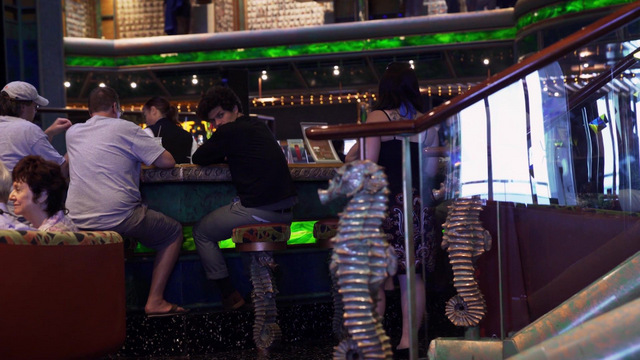 One impressive aspect of the film is it was secretly shot on a cruise ship. While the lighting isn’t always spot on and there’s a lot of dialogue free moments when Roberti or Glanz are on very visible areas of the ship, there’s some charm to this notion of filming a movie under these conditions.

Same Boat is the kind of film I could see working with a better cast, script and direction. It’s one where Netflix should just buy the rights and let a skilled filmmaker turn this potential into a funny and thoughtful rom-com. Now that’s a magic trick worth cruise ship prices.