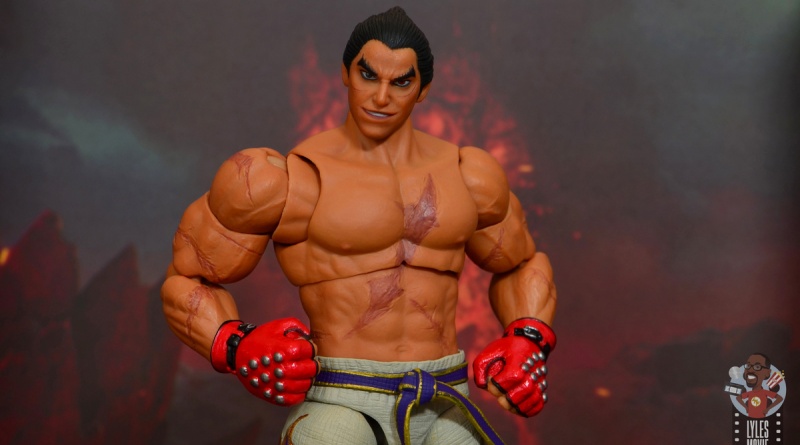 Storm Collectibles has basically gobbled up the license for every fighting franchise worth having at this point. Arguably its most neglected is Tekken, which features some of my favorite character designs.  Up to this point, SC has only done two figures — Heihachi Mishima and today’s review subject, his son, Kazuya Mishima.

Originally, one of the main heroes in the series, Kazuya’s stayed consistent with his heel turn. As Storm Collectibles has been content to keep their Tekken offerings in the Mishima family let’s see if this devilish figure is worth it.

Packaging:  I always dig the packaging job SC does with its figures. It features a prominent game design portrait of Kazuya on the front and his two main attires from the game.

The back features various shots of the figure and his various accessories and pose possibilities. Most of Kazuya’s bio is written in Japanese so it doesn’t help me out much this time.

Likeness:  Kazuya is in his standard bare-chested, karate gi pants look. I probably would have opted for the cooler suit version if it was offered just to make him stand out further from Heihachi. 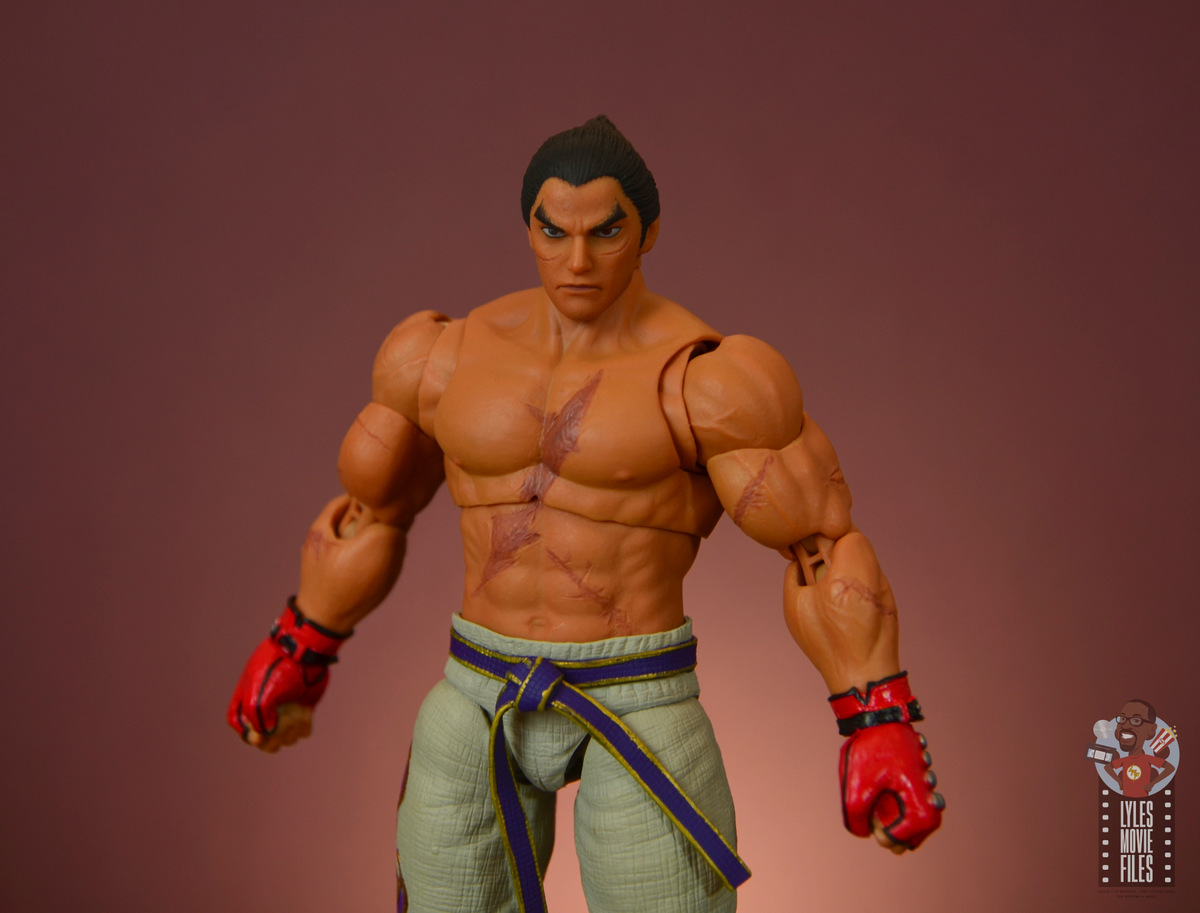 Still, this is a very well done figure with some surprising details. Kazuya’s gloves feature an impressive amount of work from the lining, the studs on the top and the buckles along the wrists. That flame design on his pants is also actually sculpted and not just the work of a good paint job. 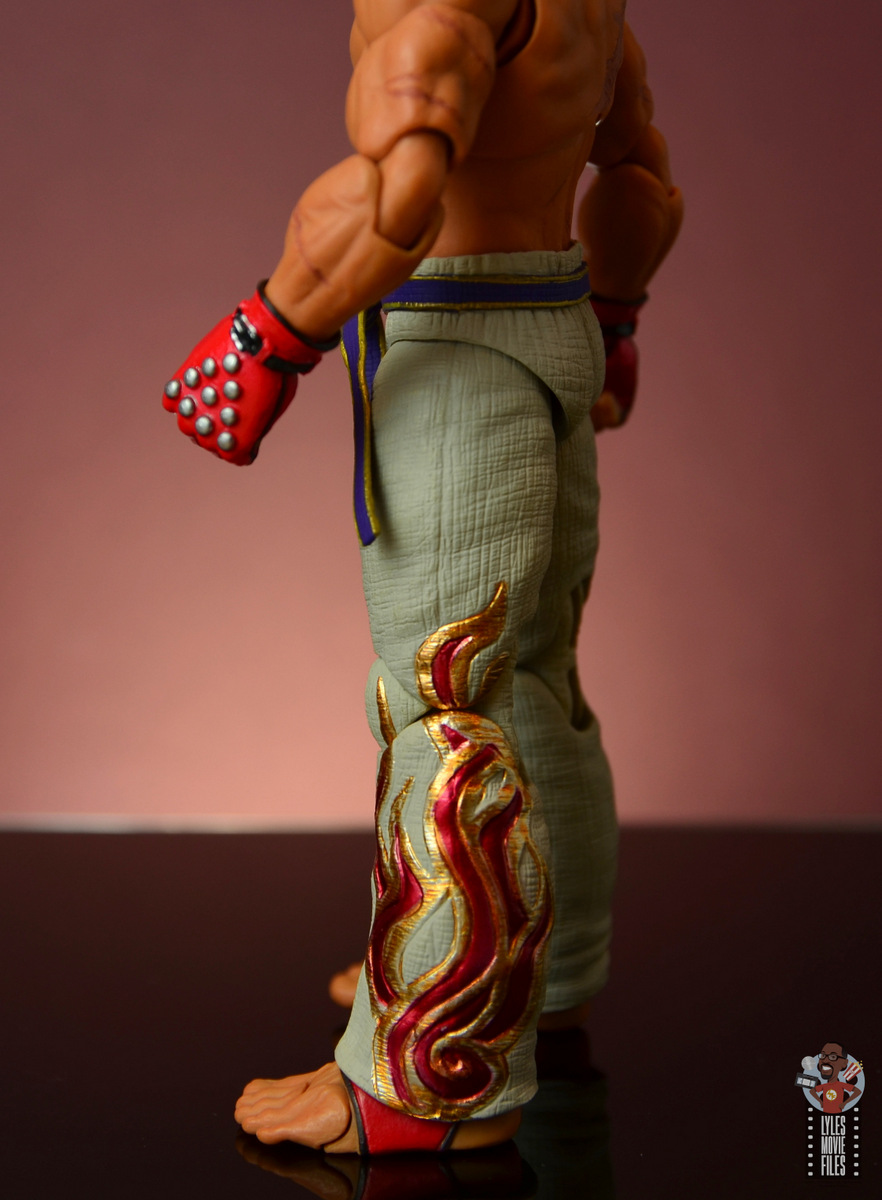 Maybe the biggest standout here is the work done on his chest with lots of scars and bruises showing the effect of his transformation into Devil. You can see tendons, which is very nicely done. 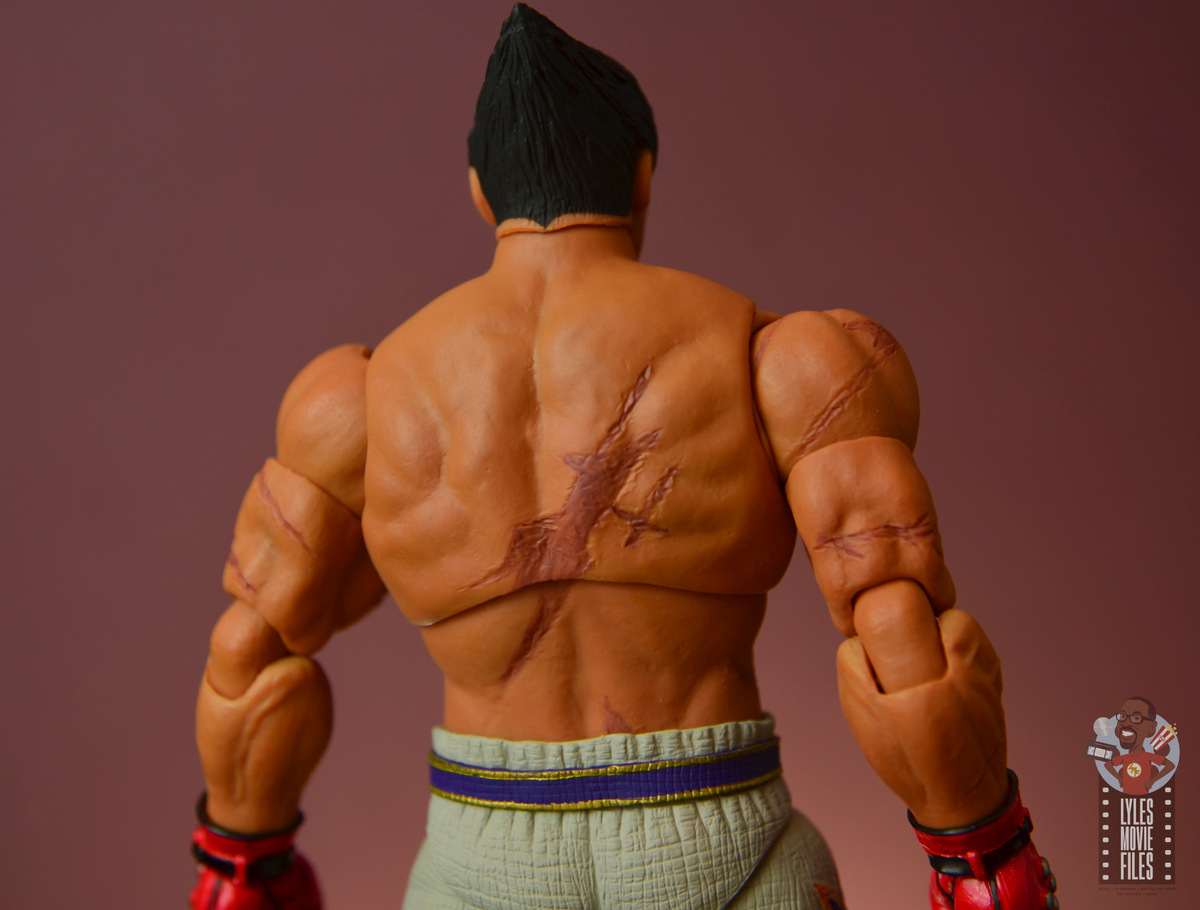 I also really liked the intensity in the default head sculpt, which captures details like the scar under his right eye, his dramatically arched eyebrows and his trademark spiky hair. 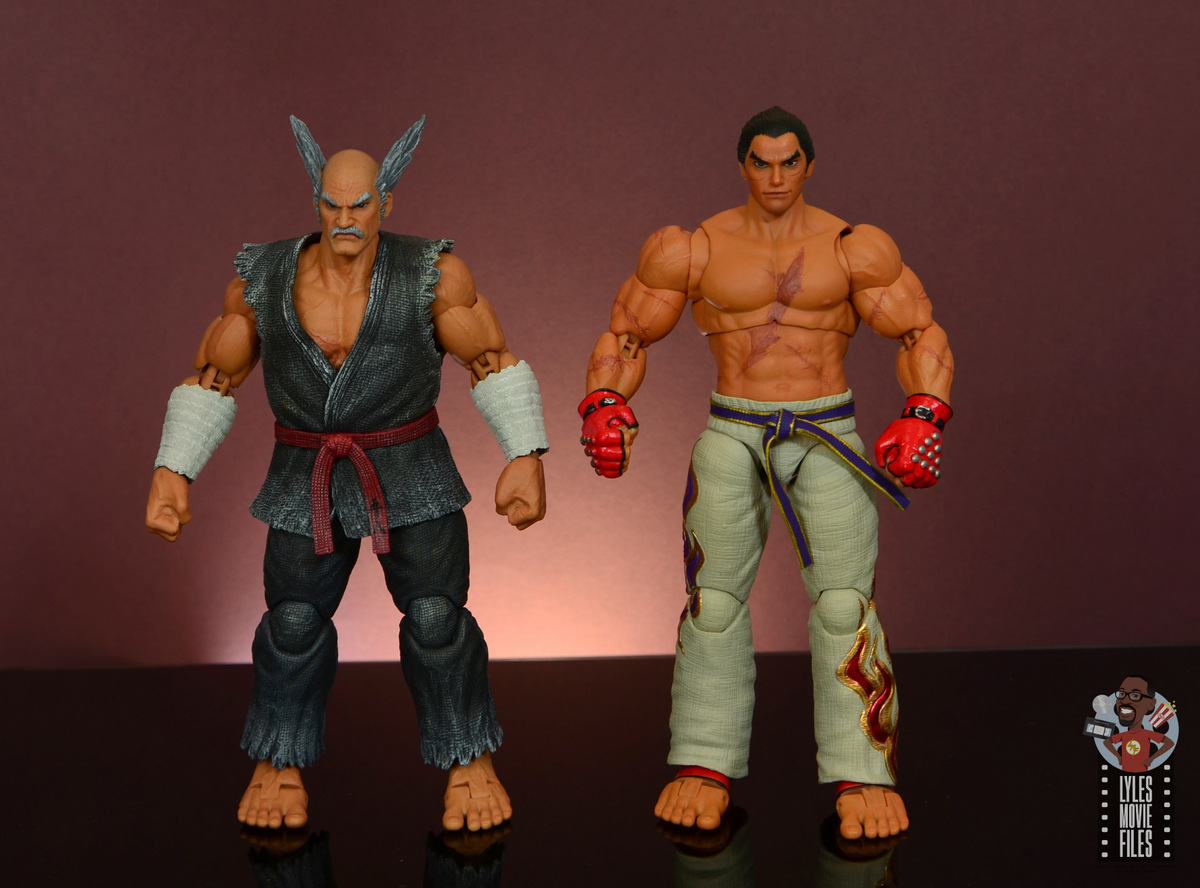 Scale:  Kazuya is a bit younger than the old man so he stands taller than Heihachi. He’s one of the taller figures in the Storm Collectibles line making poor Scorpion look like a shrimp.

Paint:  Storm Collectibles doesn’t mess around with lousy paintjobs. Kazuya features excellent work here from precise details like the studs on his gloves to the linework on his belt and the flames on his pants.

Articulation:  You won’t be lacking in terms of pose possibilities with Kazuya thanks to the fluid Storm Collectibles articulation scheme. Some of the most fun is seeing how closely you can pull off the actual moves from the games. 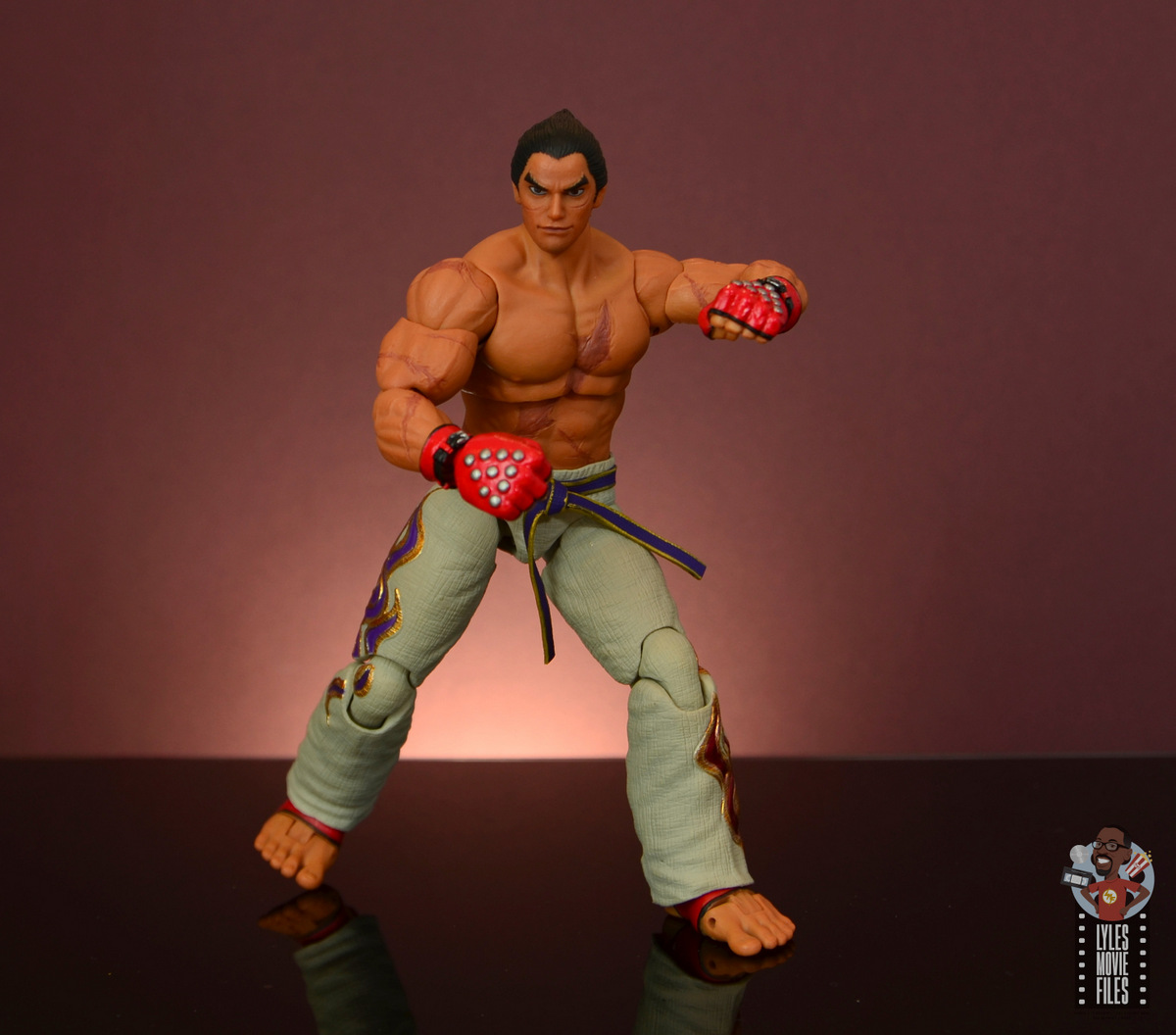 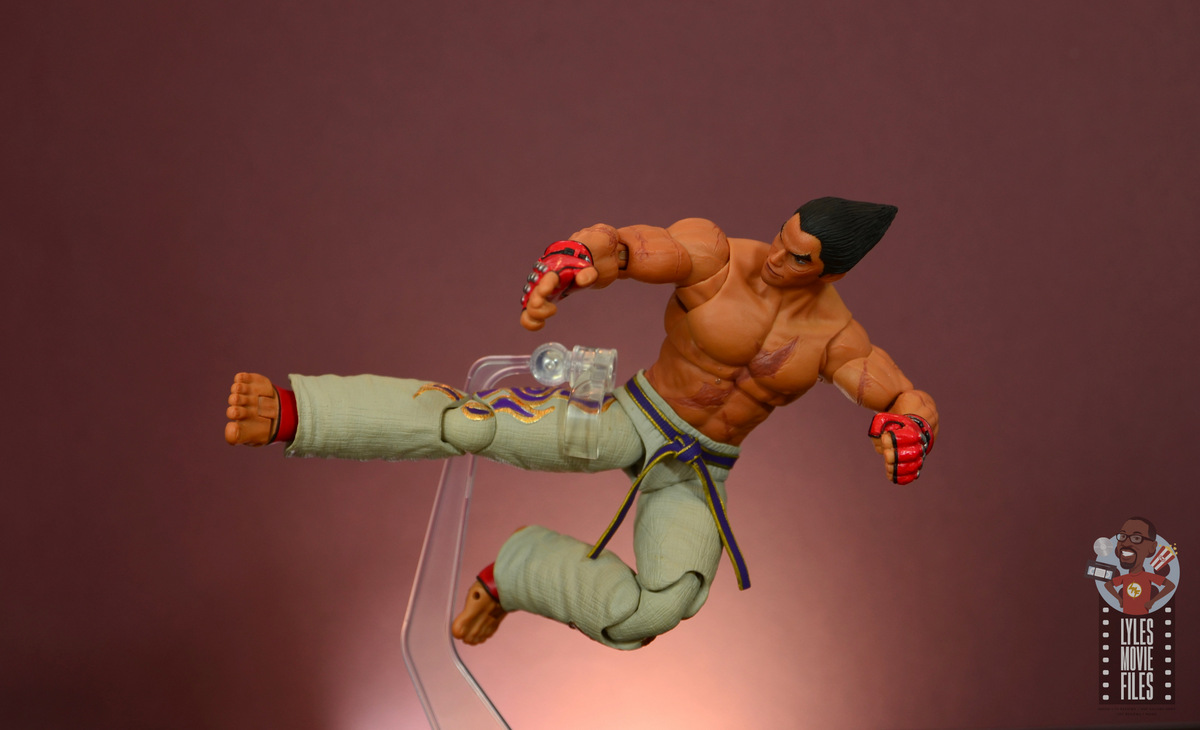 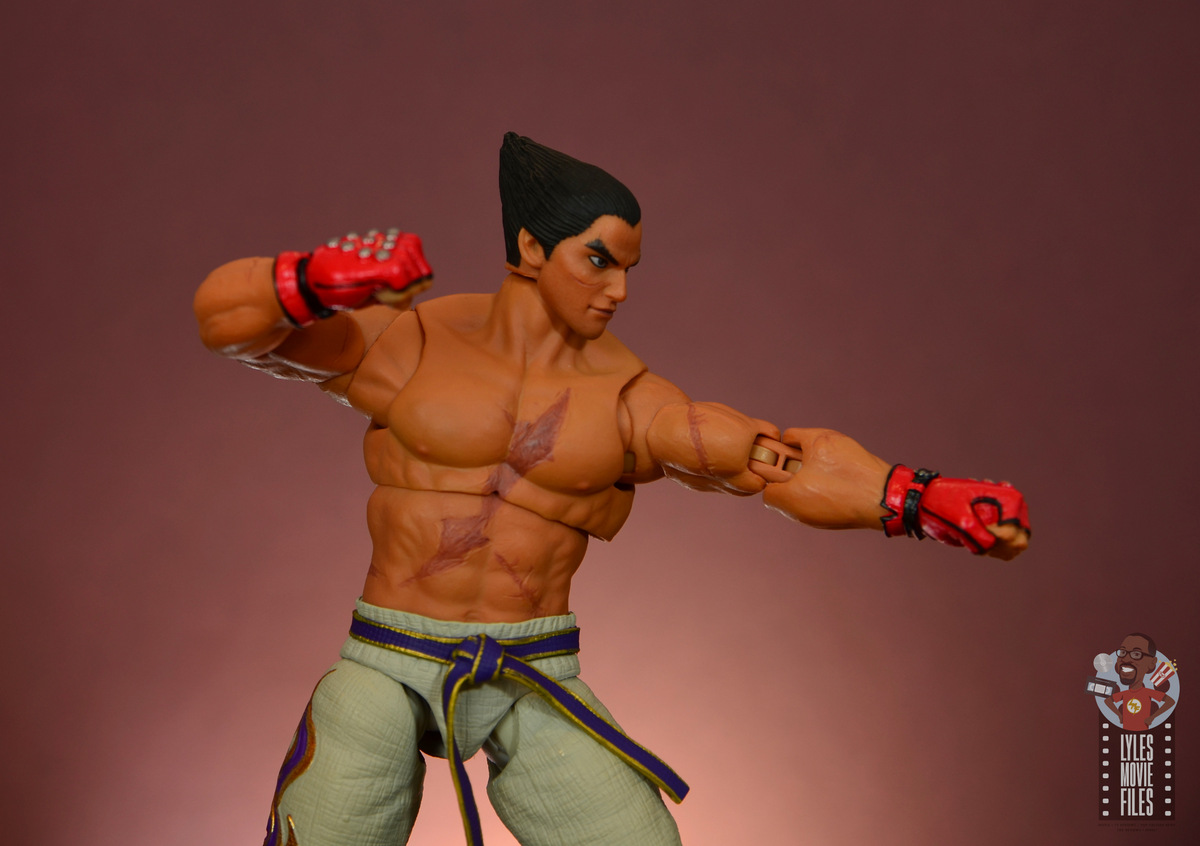 Accessories:  Kazuya isn’t as loaded with accessories as some other figures in the overall fighting game series. 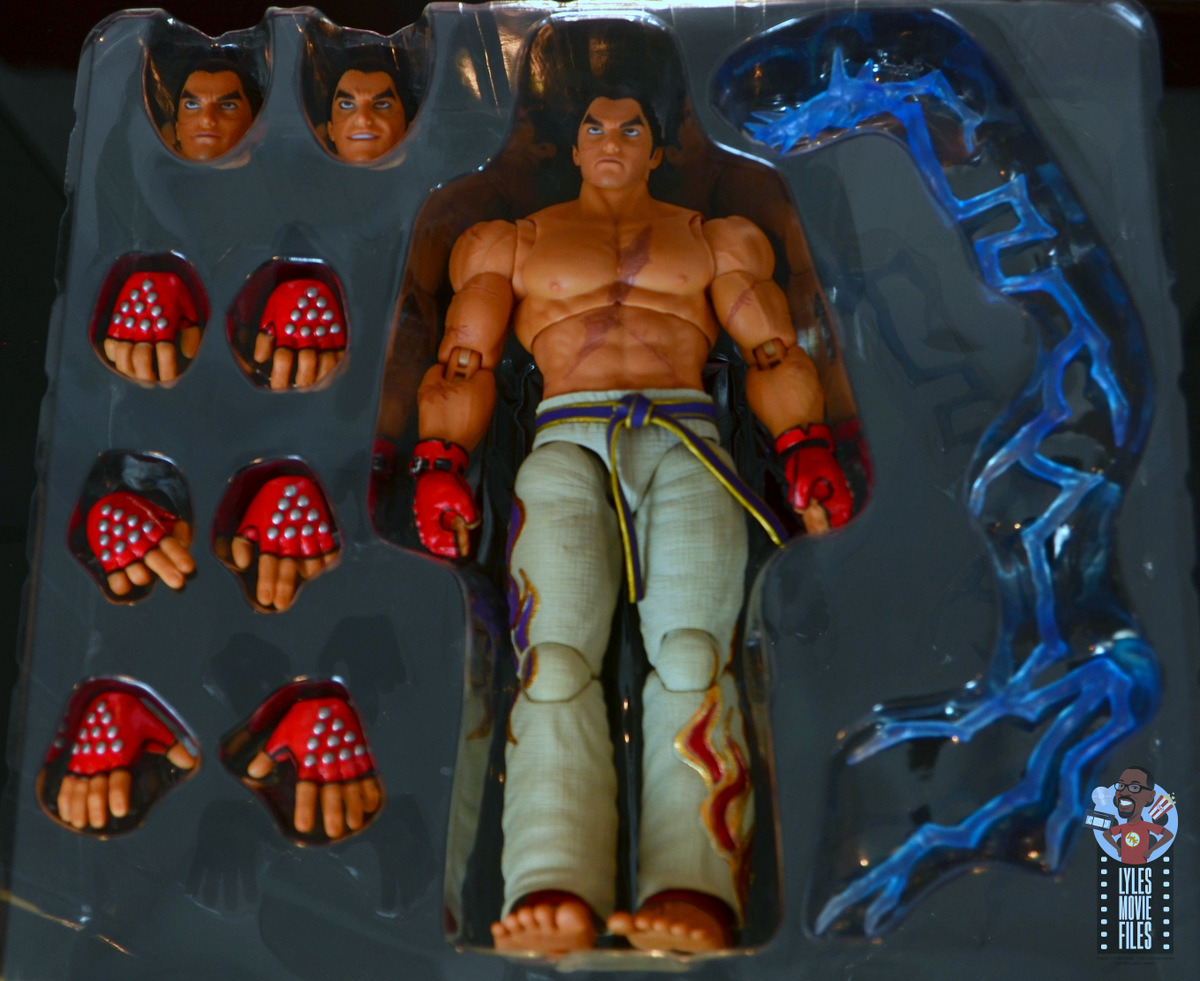 He comes with two additional heads — one with a confident smirk and the other with a sinister smile. Both work well for him. It seemed a missed opportunity not to have one with the red left eye though. 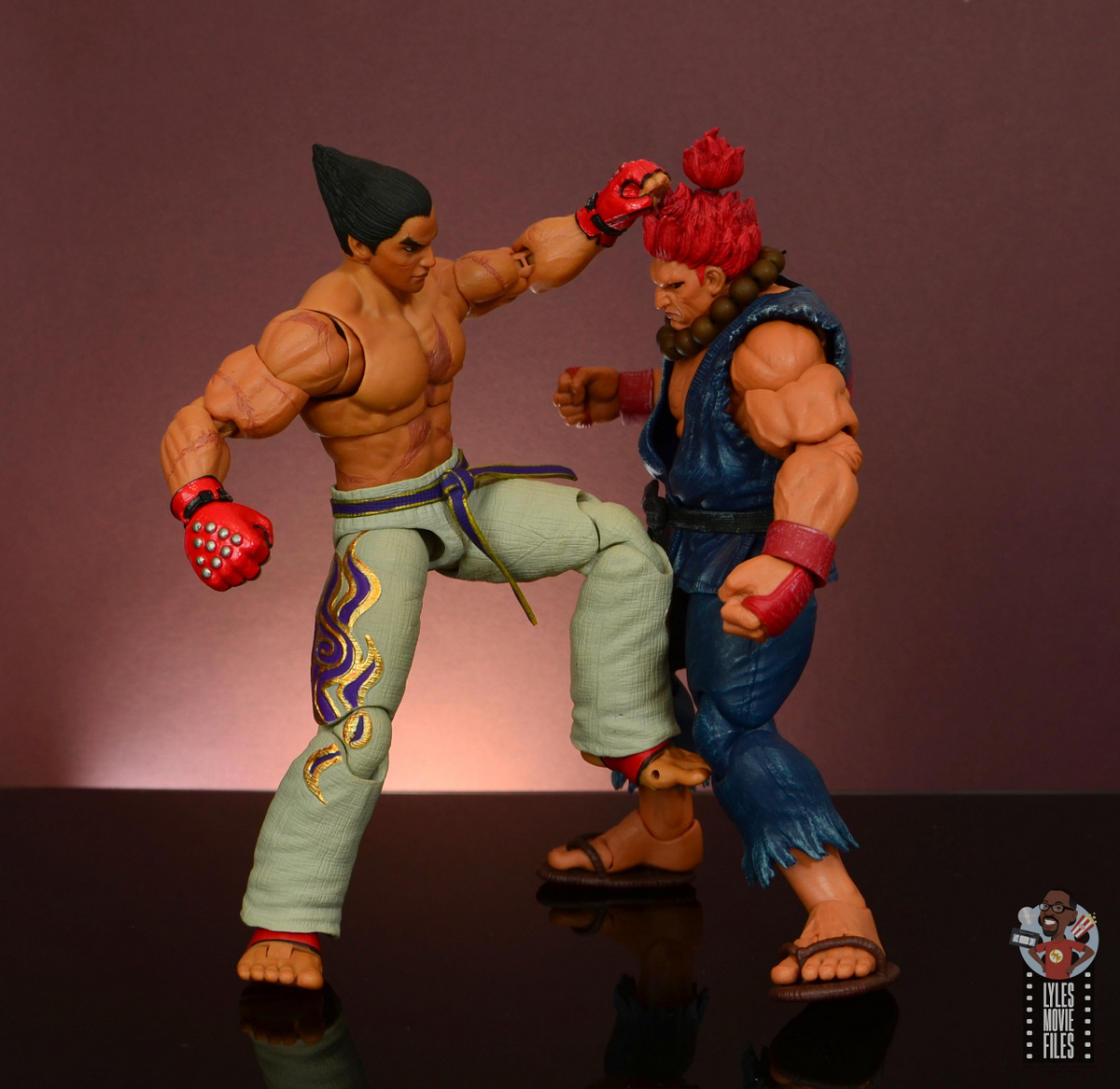 There’s also three other swappable sets of hands — open, grasping and pointing. And he has a lighting power effect that attaches to his arm.

That’s a limited array of extras compared to the norm where figures have a few more power effects. 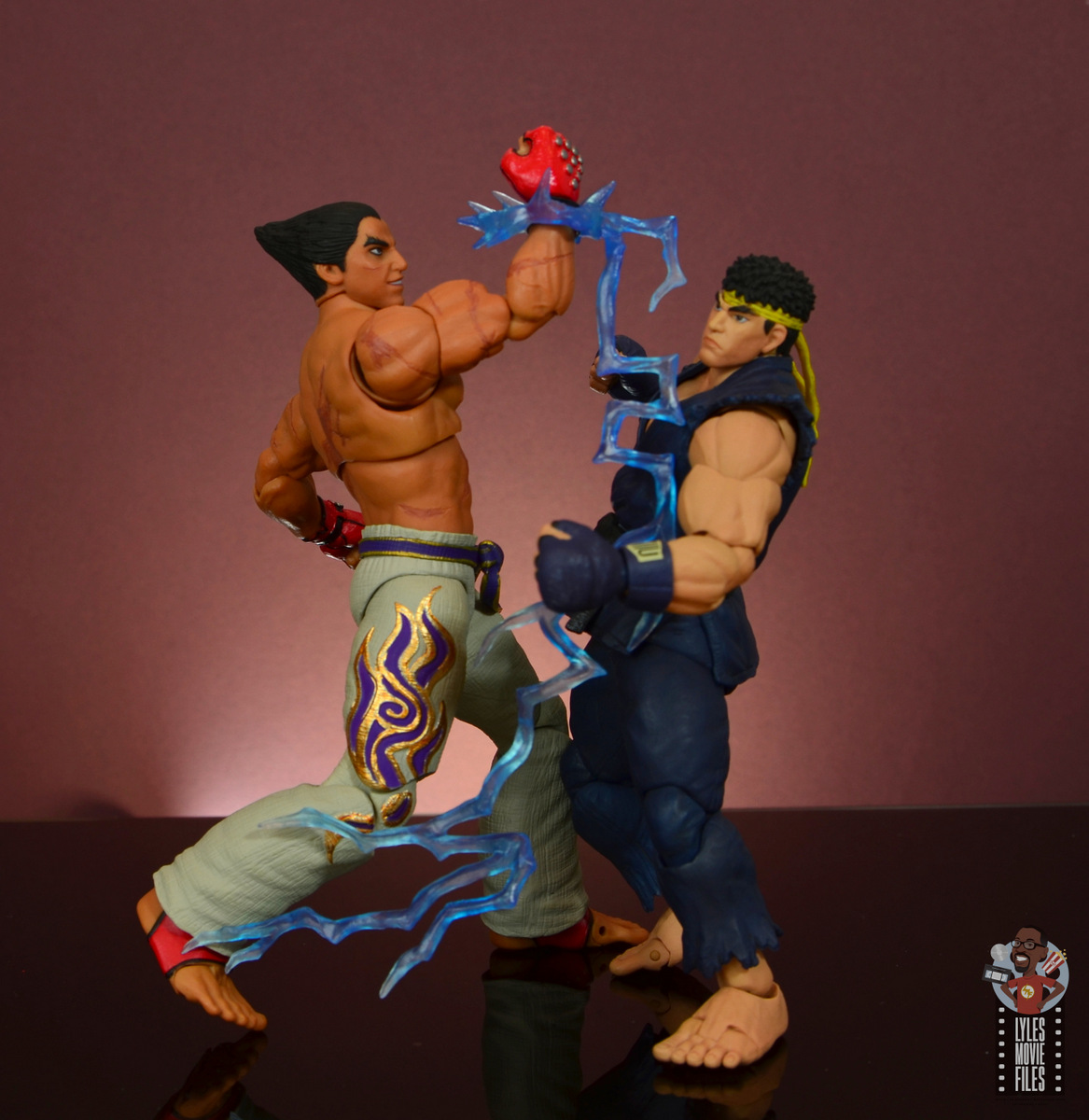 Worth It?  He’s not as stocked with accessories as most figures in the line so his $70+ price point doesn’t seem as justified, however he is a major player in the Tekken universe and Storm Collectibles did an excellent job capturing his Tekken 7 appearance.

Kazuya comes real close to a perfect score, but the smaller amount of accessories and the lack of a red left eye takes him down slightly. 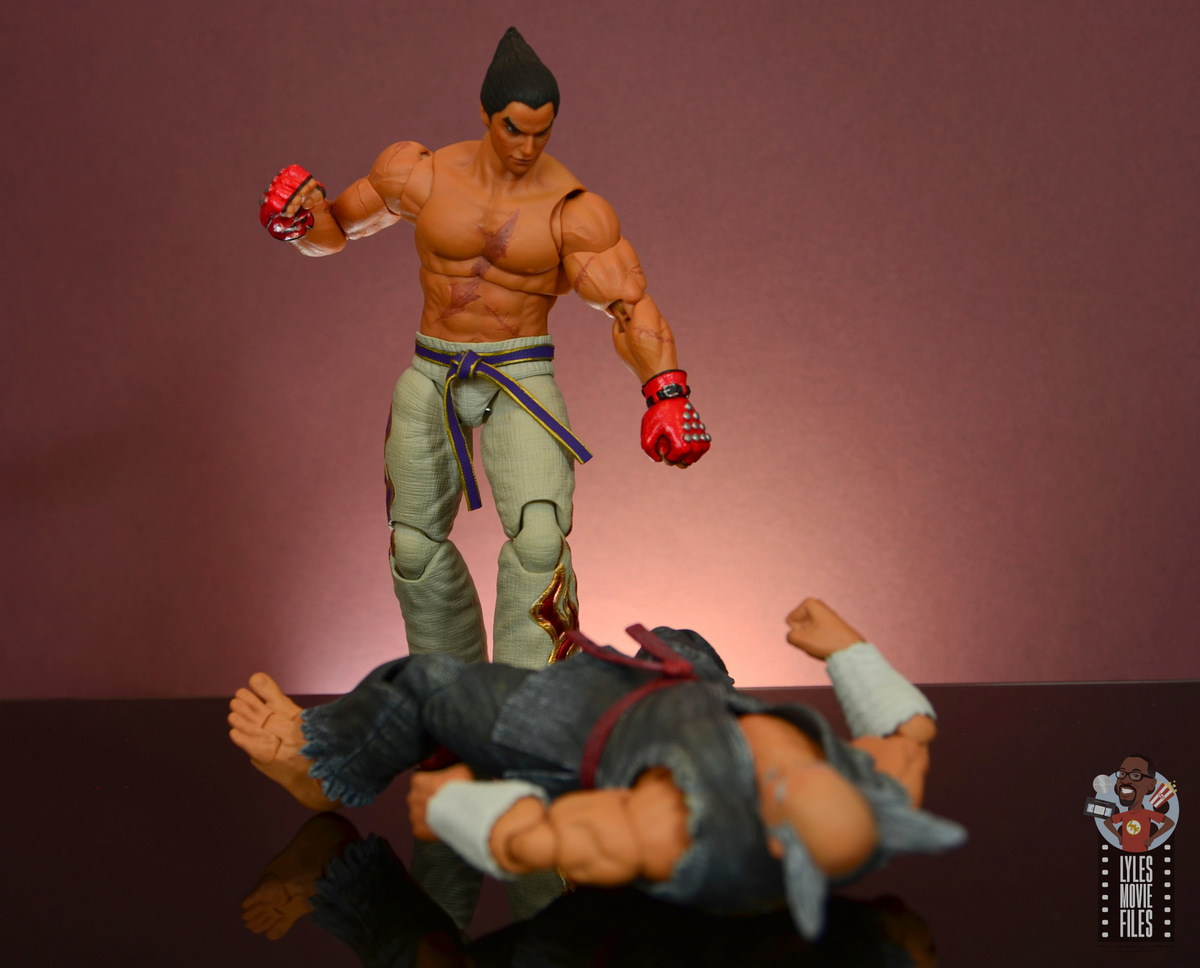 Where to Get It:  You can still get Kazuya from Amazon for $75.