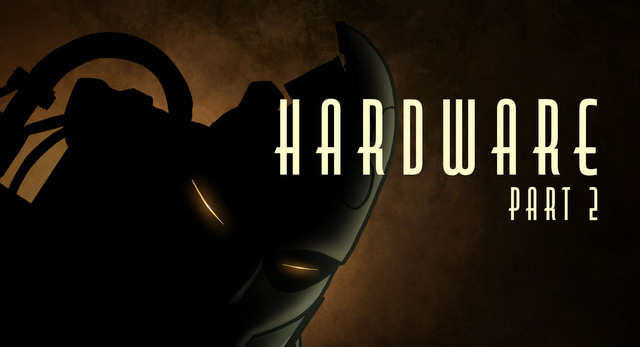 It’s always a treat to have new comics to read on Wednesdays and while we’re waiting on a return to regular shipments again, Batman: The Adventures Continue brings another slice of high quality entertainment.

Hardware finds Batman facing off with Lex Luthor in his souped up power suit. Hardly a hot take, but it’s so incredibly fitting for Lex Luthor to run around in a suit of armor, but make sure everyone sees his face as opposed to keeping his face hidden in a helmet a la Tony Stark. Luthor has some plans for the remnants of the Brainiac shell left behind in his last battle with Superman. And where is Superman anyway?

Alan Burnett and Paul Dini write a layered story that has a nice two round battle that wraps one story and then moves on to spending more time on the overarching plot. The silly thing to do would be to write this off as too simplistic or easy. It’s just storytelling done so smoothly that it appears easy. The mystery with the man running around in the alleys with a past involving Batman gets some more attention too, but next issue Batman is poised to battle one of his more formidable foes.

Ty Templeton’s art is well fitted for this book. He’s got a great style that’s ideal for adapting the cartoon source material to comics. Monica Kubina’s rich color choices add a welcome energy to the action as well and letterer Joshua Reed arranges the dialogue in an easy to follow format.

This series would be welcome at any point, but it’s especially timely to get some fun animated series Batman installments during this period.

You can get this digital comic at these digital platforms — ReadDC, ComiXology, Kindle and more.