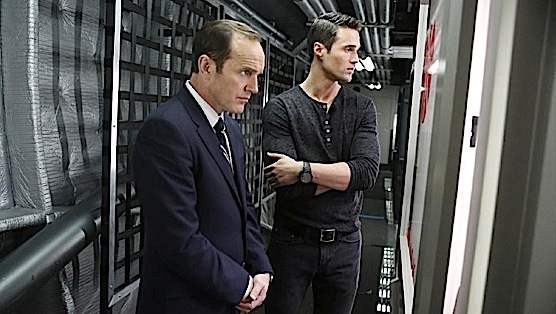 SHIELD was still rattled following Skye getting shot by Quinn. He’s fine being the smug, dutiful soldier in The Clairvoyant’s army until May smashes his face up. I love May. That doesn’t help Skye much and neither can the SHIELD Shock Trauma team so Coulson plans to go to Dr. Streiten and have his crew help Skye the same way they helped him. 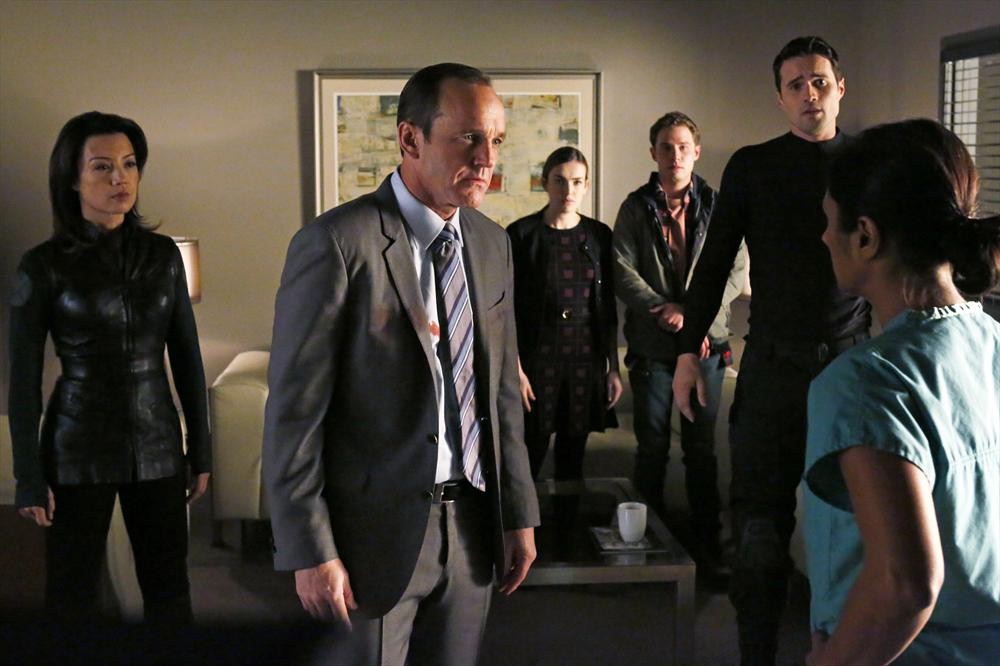 He gives FitzSimmons and Ward the full breakdown on his recovery and despite seeing Coulson alive and well, still question how it’s possible.

And just in case Skye doesn’t pull through, they’re not handing Quinn over for de-briefing yet.

Naturally this annoys SHIELD brass who send a pair of agents to retrieve Quinn. Say hello to Agents John Garrett (Bill Paxton) and Antoine Triplett (B.J. Britt). Garrett used to be Ward’s supervisor before he joined Coulson’s crew and Trip is his replacement. 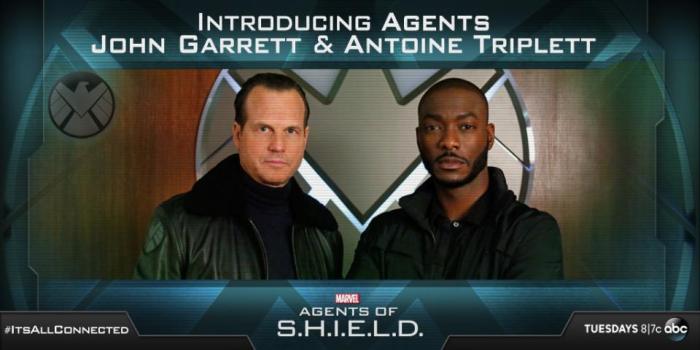 Coulson and Garrett have a respectful tension between them with Garrett being more of a brash, life of the party type compared to Coulson’s more reserved demeanor. Putting Quinn between them could make for some trouble as Garrett has his own issues with Quinn for taking out some of his team.

After a stand-off between Trip and Ward, Coulson and Garrett settle things down by announcing a team-up: Garrett and Trip will do their interrogation aboard The Bus and help Coulson and crew. Paxton is great and I fully own my bias in finding him a sensational addition to the cast. Britt adds some much needed color to the show as well beyond the random recurrent Mike appearances.

Garrett plays with Quinn slightly nicer than May although grabbing a dude’s tongue can’t be sanitary. Quinn says The Clairvoyant sees everything except what happened to Coulson so shooting Skye was part of his plan to figure out how SHIELD saved Coulson. Sneaky. Garrett realizes Coulson doesn’t know how SHIELD saved him so they’ve got to play along.

FitzSimmons tracks down a possible location for this GH325 miracle drug that was used on Coulson. They both exclaim how Skye would know how to crack the encryption. This was a very forced instance of saying Skye is super important to the team as there really should be nothing Skye does that Fitz can’t do just as easily. The guy made mini drones — he can’t figure out how to crack an encryption? 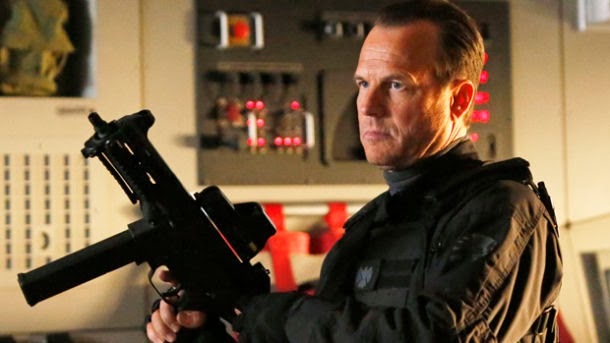 Ward, Garrett, Fitz and Coulson go into GH325 while Trip stays behind with Simmons to help Skye, and maybe do a little light flirting. Ward and Garrett are very effective in action and show their teamwork hasn’t atrophied in his time with Coulson. Fitz remarks that Skye could probably hack the escape route. OK calm down already, we get it — Skye is awesome and Fitz is apparently a worthless genius.

Coulson finds the lab where he was operated on and Fitz says he wishes Simmons were here as she’d know what to grab. Why bring Fitz along at all? This episode was all about making Fitz come off like a loser. They find the GH325 serum, but Coulson gets distracted by a door with T.A.H.I.T.I. on the front.

Whatever the contents in that room were enough to frighten Coulson to yelling they can’t give Skye the serum. It’s too late as Simmons already injected it. For all of Coulson’s concerns, it actually does save Skye. PS, this team looks a lot better with Trip here.

May confronts Coulson about his warning and he gives her a vague explanation without saying what he actually saw — half of an alien in a somewhat decomposed state. Time to check those SHIELD brand energy drinks. Coulson sure went back on his no more secrets stance quickly, didn’t he? 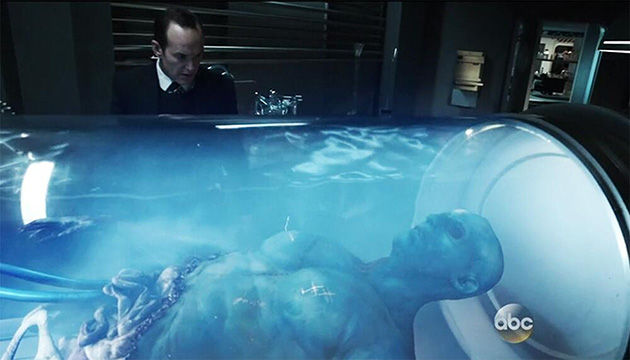 In our post credits scene, Asgardian Lorelei (Elena Satine) arrives and seduces a newlywed into giving her a ride prompting his poor bride to stumble out of the hotel wondering where he’s headed. This seems like a random shift away from the big Clairvoyant storyline and too quick to return to another Asgardian appearance, but we’ll see how things play out.

Besides making Fitz look amazingly incompetent, TAHITI was another strong installment as SHIELD reaches the home stretch of its first season.